Was to certain poor shepherds in fields as they lay

As typical we had Christmas at

bunny_hugger's parents. We got up in the morning and found the mail already delivered, settling the one thing we needed to wait for. (I'd gotten one present delivered late, although in time to wrap before this.) So after a light lunch we loaded up the car, put Sunshine into her carrier --- she thumped twice, so she's coming to be more at peace with these car rides --- and set Fezziwig up with a second water bottle so he couldn't possibly go thirsty while we were away for two days.

bunny_hugger remembered: we didn't have the board games with us. Her brother being home is a rare chance for us to play Betrayal at the House on the Hill. (Her parents are afraid of the game, although her mother is growing more curious about it.) Being with her parents is a chance to play Mice and Mystics. It'd be awful to miss the chance to play that. I volunteered: once we had everything offloaded, I'd go back home and get the games. Also,

bunny_hugger had left behind Christmas cards so that was worth getting. I didn't take my jacket off, the better to keep anyone from talking me into ``it's not worth it just for the board games'', and took back off. I did stop for gas, and spent a bit more time than strictly necessary at home. I'd wanted to take care of something and also to give

bunny_hugger chance to e-mail back whether anything else had been overlooked. Nothing had been, we thought, so I drove back to rejoin the holiday in progress.

(It turns out we'd forgotten a book

bunny_hugger meant to give her mother. We'll make good on that New Year's Eve, though.)

I'd spent long enough driving out and back that it was getting to dinnertime.

bunny_hugger's brother took charge of cooking, with her mother assisting, part of the project to have us feel really very full. He made vegetarian Salisbury steaks, reminding us all of how great it was to have Salisbury steaks back in the day. Even when they were the school lunch and not actually that good.

bunny_hugger's father made a fire, using once again the propane torch. He said this was the first time he'd had a fire since getting Peewee, the hyperactive terrier-chihuahua mix(?) they adopted this year. This surprised me, but then apart from one week it's been a warm December. Also we asked him why the propane torch was still hissing; he asked about what hissing before acknowledging that yeah, it was leaking a bit. He turned it off, thankfully. This is too many unwanted toxic gasses in the area for me this year.

bunny_hugger's brother. Their mother watched and kept seeming interested, but could not be coaxed into play. The game has you explore a house by drawing rooms from a random stack. This (mostly) ends when the Haunt begins, and we kept drawing cards and rolling dice that kept the Haunt from happening. The house ended up sprawling over most of the dining room table. Ah, but when the Haunt finally began? We had a nice simple game,

bunny_hugger versus her brother and me. Our objective: get to the furnace room in the basement and --- oh.

bunny_hugger's character killed my character in one turn. I'd lost a great deal of physical strength in a couple of bad rolls right before the Haunt began. And many of these Haunts are poorly balanced. So this was your classic Exploration phase lasting 26 hours of gameplay, leading up to the competitive aspect (the part which intimidates her parents) lasting half a turn.

It was barely to midnight, but we were all exhausted and nobody felt up to playing another round, or going to another game. Her brother went upstairs, possibly to do more wrapping of things, maybe just to sleep. I got my computer to read the comics and stuff.

Trivia: The first, test, observations of the Mount Wilson observatory telescope were of Jupiter. The images were awful, a half-dozen overlapping images of the planet. Source: The Perfect Machine: Building the Palomar Telescope, Ronald Forence. (The Mount Wilson telescope was very vulnerable to changes in temperature, a sensitively not anticipated.) 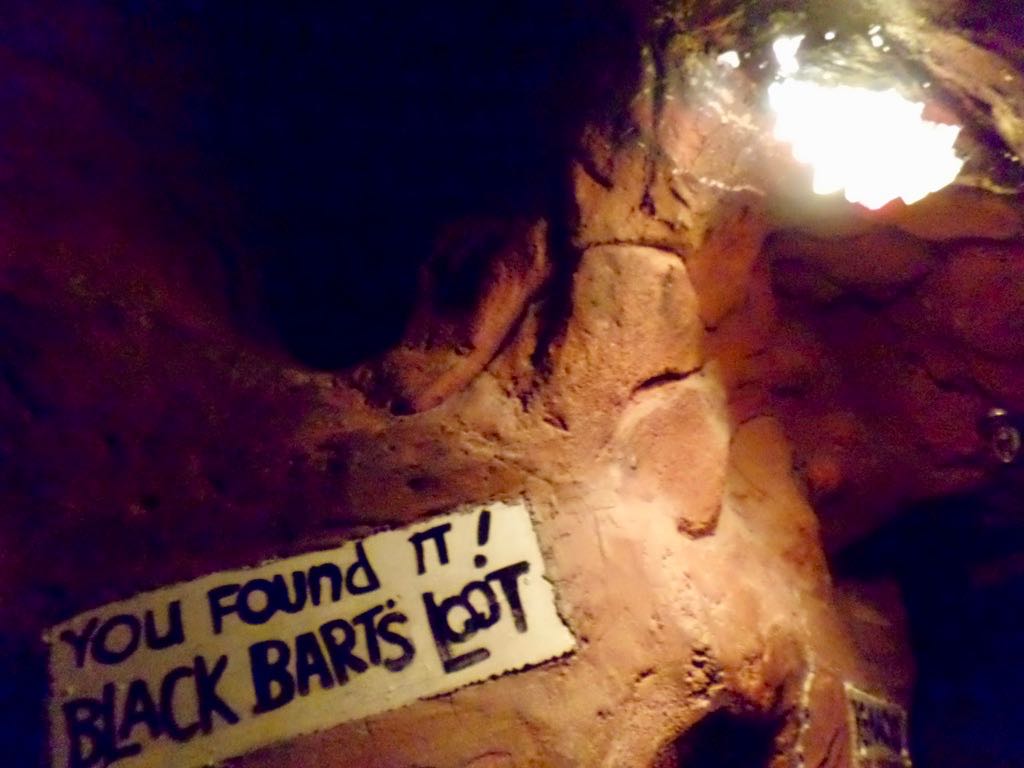 The promise of Black Bart's Loot, buried deep within the cave. 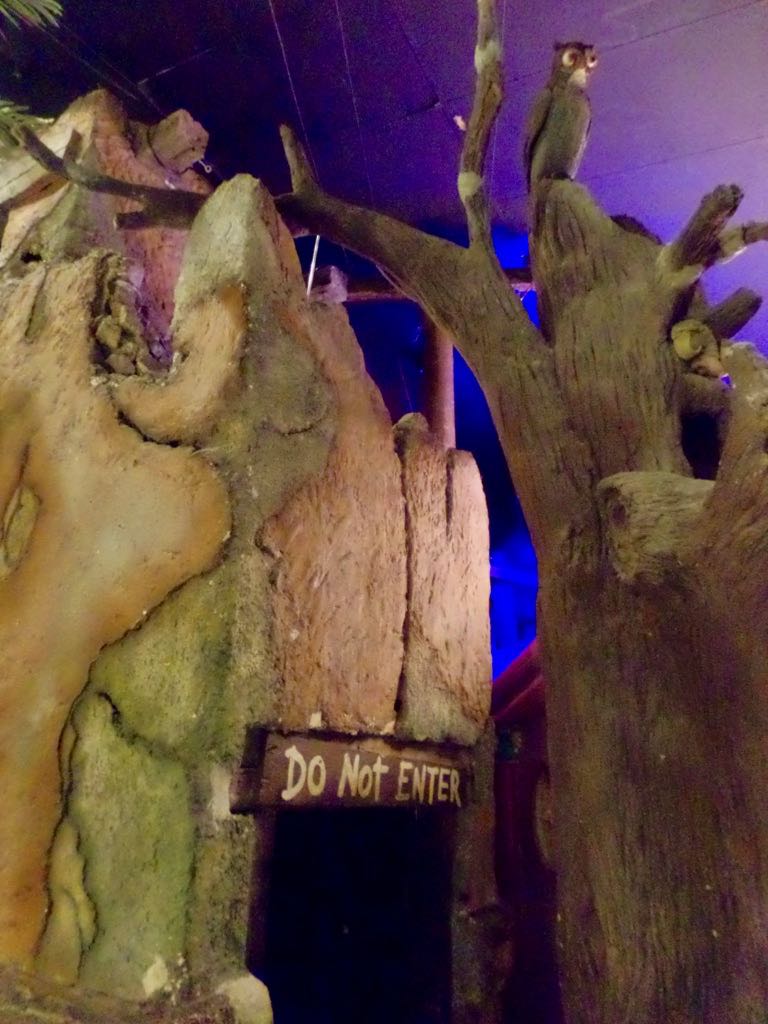 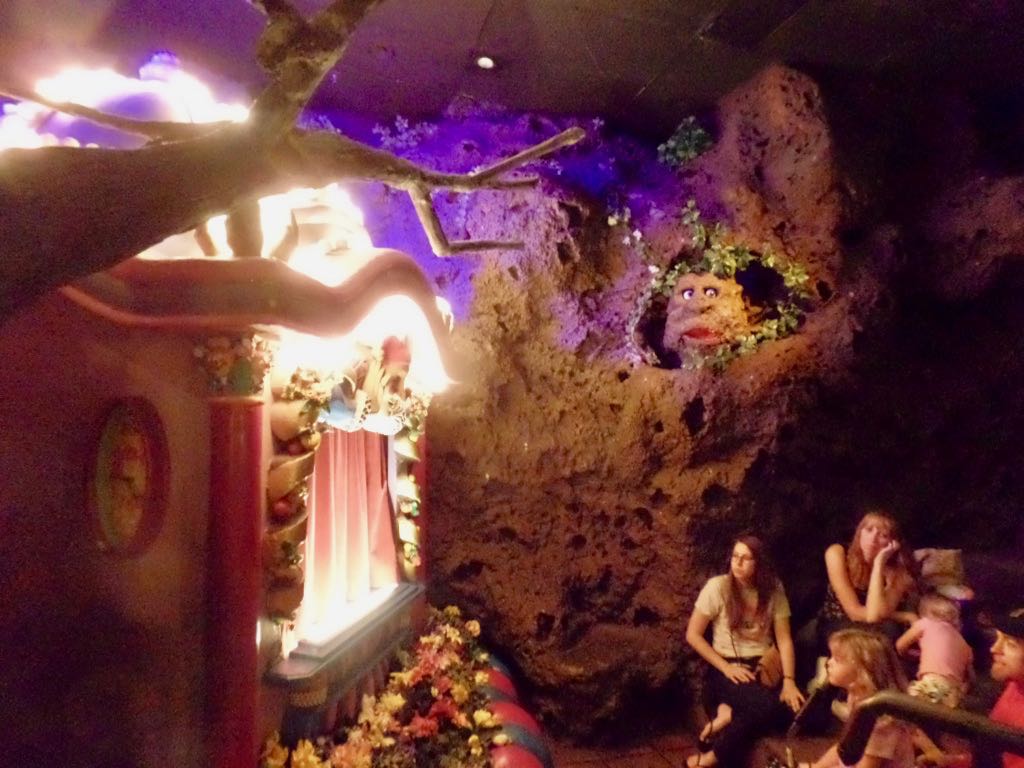 People gathered around the puppet theater as a performance starts. Notice there's a face in the hill up there that I don't remember coming into play in the show.