In fields where they lay a-keeping their sheep

The advantage going to bed early Christmas Eve is being able to get up earlier Christmas Day. Not as early as

bunny_hugger's parents warned we would. They had repeatedly told us how Pee-Wee makes such a loud, yapping racket in the morning that we wouldn't be able to sleep past her wake time of about 6:30. And, yes, true, she is a loud and yappy dog. But she gave a few excited barks in the morning, and some running around. But after about 812 door-slams as her parents took dogs in and out, all was quiet and we got a couple more hours' sleep.

bunny_hugger came downstairs in her Stitch kigurumi, and I came down to match as Angel. Her brother bowed out of Santa's Elf duties this year in passing out presents; I took the spot instead. It's been a while. I needed a little time to figure how to pace giving out presents so that multiple people weren't opening at once;

bunny_hugger missed her mother opening some books from my bad scheduling. I was also trying to work out not giving people too long a time between presents, which was complicated by, well, not everybody got the same number of things.

bunny_hugger's mother got a large number of gifts, many of them books, plus a couple jigsaw puzzles. Her father got only a couple, including one --- a flat-pack bookshelf --- he'd picked up when visiting us a couple days before. Her brother had a relatively few gifts, and was never quite clear about whether he was going to open the things going to his girlfriend back in New York City. And

bunny_hugger had fewer gifts than average, something compensated for by the one big gift that her father particularly had been excited about the day before. He told me to give it to

bunny_hugger first. But, when I realized what it had to be, I moved it to the end: everything else would be anticlimax. And, for my part, I received the usual sorts of mostly flat things. A lot of books, ranging from space-history or pop physics stuff through to Harvey Comics reprints. You know, the stuff that makes sense for me to read. Ah, but the big thing ... the climax ... and the last of the presents ...

The American Doll company has a girl, Julie, who's there for 1973. She has a hobby. She plays pinball. Her new table? The Flip Side. It is built in scale to the American Dolls, so it's maybe a foot back to front and about 18 inches tall. And ... it's a working pinball machine. It's a basic one: three pop bumpers, a little spinning paddle that adds chaos to things, two kickers, and a couple special standing targets and one scoop. But it works. And surprisingly well. The rule set is a little basic for its intended era, and it has an eight-segment LED score display instead of the scoring reels. But it's pretty good. This isn't just our being wowed by an outsider taking pinball seriously. Other people on pinball web forums got it ``for their children'' for the holidays and have found it rather fun to play too. And, it's pointed out, nobody can think of a real reason it couldn't be put into a legitimate pinball tournament. It lacks a tilt bob, so a tournament director would have to add some constraint to keep people from just picking up the game to prevent a ball drain. But there's regular ways to do that, too.

bunny_hugger has declared she'll bring that to her tournament events to use as a tiebreaker game. I think everyone would love that.

There were smaller delights, too.

bunny_hugger's brother's girlfriend had slipped a present into his luggage unsuspected; its wrapping, basic brown paper, she covered with a doodled emoji cartoon, and try telling me that's not wonderful. And

bunny_hugger gave to me Timothy Young's children's book untitled, in which Carlos Coatimundi and Ignatz Capybara mostly complain about the story they're in not getting started. I had no idea the thing existed. The cast and the deeply self-referential nature of the book make it incredibly my kind of thing. I could probably get away with claiming it's a piece of Me Fanfic.

With presents exchanged and a lot of spinach-artichoke dip eaten and the rest of the potato chip dip from the previous day we all went and got dressed. This revealed I had done something bad enough it almost justified going back home for: I hadn't packed my shirts. A post-trip examination showed them next to the duffel bag I'd prepped, so I don't know whether the trouble is I failed to pack them ever, or they fell out when I picked up the unzippered bag, or I had taken them out for some reason and spaced on putting them back. What could I do? Not drive back home again. Fortunately I had t-shirts to use as undergarments that were just like ten percen less presentable than normal, for me, and between that and the disturbingly warm weather I could get away with that. Sloppy work on my part, though.

Trivia: In 1842 mathematics, philosophy, and astronomy Professor Ormsby MacKnight Mitchel of Cincinnati College began soliciting subscriptions from the public to support building an observatory. Going door-to-door he raised $9,437 for the telescope and about $6,500 for the building. Source: The Long Space Age: The Economic Origins of Space Exploration from Colonial America to the Cold War, Alexander MacDonald.

PS: What's there to see at the end of Casa Bonita? One of the last attractions is this Treasure Room, set off to the side where kids can just discover it. 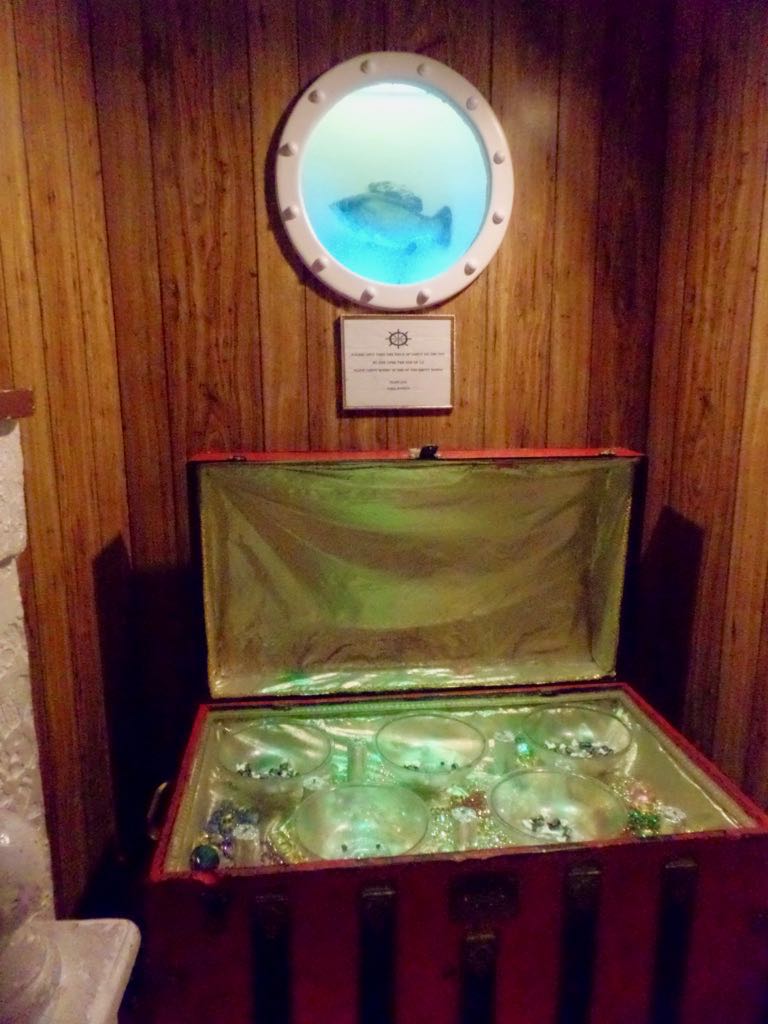 And you're welcome to take something from the treasure chest! It's candies. 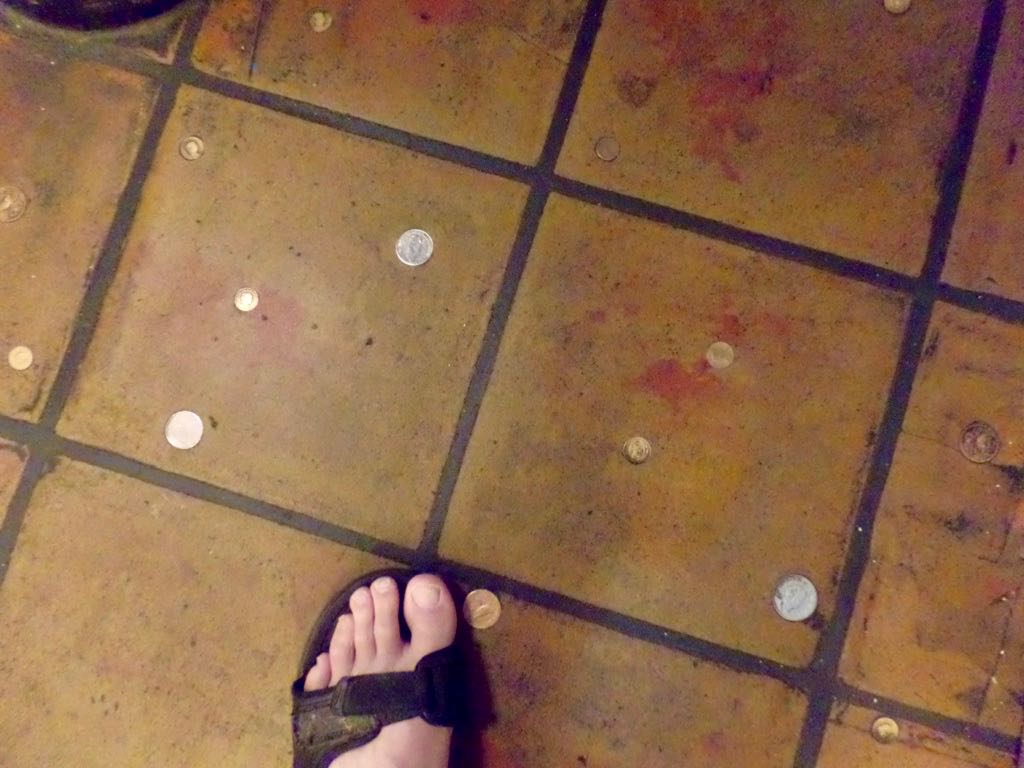 There's a mass of coins embedded into the floor, though. It's hard not to reach down and try to pick some up.