All you need is love

bunny_hugger. I'm so glad we're seeing it in with each other.

After we got dressed as well as possible for me, we had a couple free hours until dinner. This was our chance for another round of Betrayal at the House on the Hill. This time around the Haunt turned out to be new to us, even though it was one from the pre-expansion set, which

bunny_hugger and I have played a fair bit with MWS. In this particular Haunt we had a Secret Traitor, one whose identity --- and goals --- were unknown to the party at large. Only the existence of one is known.

bunny_hugger and her brother pretty instantly came to the conclusion that I was the Traitor. This although I was doing exactly the things needed to defeat the Traitor and in the fastest possible manner. This, of course, is because I wasn't the Traitor;

bunny_hugger I suppose concluded that since I was so obviously not acting like the Traitor I had to be the Traitor. I don't know whether to find this flattering or insulting.

In the time between that and dinner I went upstairs to call my parents. They were visiting my brother and his family in Maryland, so I was able to say hi to a large section of my extended family all at once. This included a blitz of my father talking about his sisters, with whom he's reconciled after decades apart. And then he went and gave me a shiver by saying how he figures to go to his college reunion this coming year, but that'll be the last time. He will be over eighty by the next time a reunion year comes but, boy, that stinks to observe, doesn't it? Anyway, everybody's well right now, including my aunt that we had feared was going to die this autumn.

Dinner was again made by

bunny_hugger's brother, with the support of his mother. This was a baked macaroni and cheese, made with some gouda and ... another cheese ... that we had gotten at Horrock's a few days earlier. Also gotten by me at Horrock's a few days earlier (we think): a mild cold, just enough to leave me achy and leaning towards cranky, although that wouldn't get genuinely bad before night. The cheese was the better deal, and it went into the sort of dinner that makes you realize how really deeply enjoyable baked macaroni and cheese is. We were eating leftovers of it through to Monday. This was made with the assistance of the wine I'd gotten for Thanksgiving and was unable to open; her brother bought a proper corkscrew, as we requested, forgetting that her parents have a proper corkscrew. It's

bunny_hugger and I that don't. Or, didn't, now.

After dinner we suggested watching A Charlie Brown Christmas, to learn that they all had done that on Monday, without us. So we went instead to the Alastair Sim Scrooge/A Christmas Carol, which we watched without anybody raising their voices about getting the aspect ratio correct. And we renewed the annual tradition of

bunny_hugger's father played a DVD featurette of Robin Gibb explaining the recording of his Christmas album. I'm not clear on why exactly. I think he wanted to share with his son, who's recorded and published three albums, what it looks like to produce an album. It's sweet even if I don't perfectly get what was going on.

We had ice cream (watching carefully that her father didn't sneak it into the microwave). And then it was late enough that

bunny_hugger's father wanted to go to bed rather than play more board games. He gave permission for us to go ahead and play the next Mice and Mystics chapter without him. Mice and Mystics is a fun game and we are making progress only slowly through it. The game took only a quick 18 hours to set up, though, and we set out in the first room and ... got two of the four characters captured. I voted against restarting, because I usually like to see how the death-spiral plays out. In this case, fantastically: one more character was captured and then mine, the sole survivor ... went and captured all the minions left on the board, bringing our party back. And we made it through three more rooms, pretty good progress, before we did finally lose. We had almost no chance of making it to the end anyway, not after losing three characters in the first encounter. But this is a new and more complicated chapter. The rule book explains there's some trick mechanism you can use once to advance the plot, and recommends saving it until you really need it. You understand their giving advice. RPG players are notorious for using their special items the first moment it seems advantageous, and never keep the things around for the last possible moment. Anyway, we'll probably do better for having a little run-through like this.

Fun as that was, it was maybe a poor choice for game to play. It took forever to set up and to clean back up. Mysterium or Illuminati would have better fit the time we have available. This all took us to about, maybe even after midnight, and bed. We had to get up early for Boxing Day.

Trivia: The Gregorian calendar has reliably had the year start 1 January; the Julian calendar had multiple and varied year starts. Source: Mapping Time: The Calendar and its History, EG Richards.

PS: Reading the Comics, December 28, 2019: Running Out The 2010s Edition, pointing out a couple strips from you-know-what there.

PPS: And a little bit more of the end of Casa Bonita! 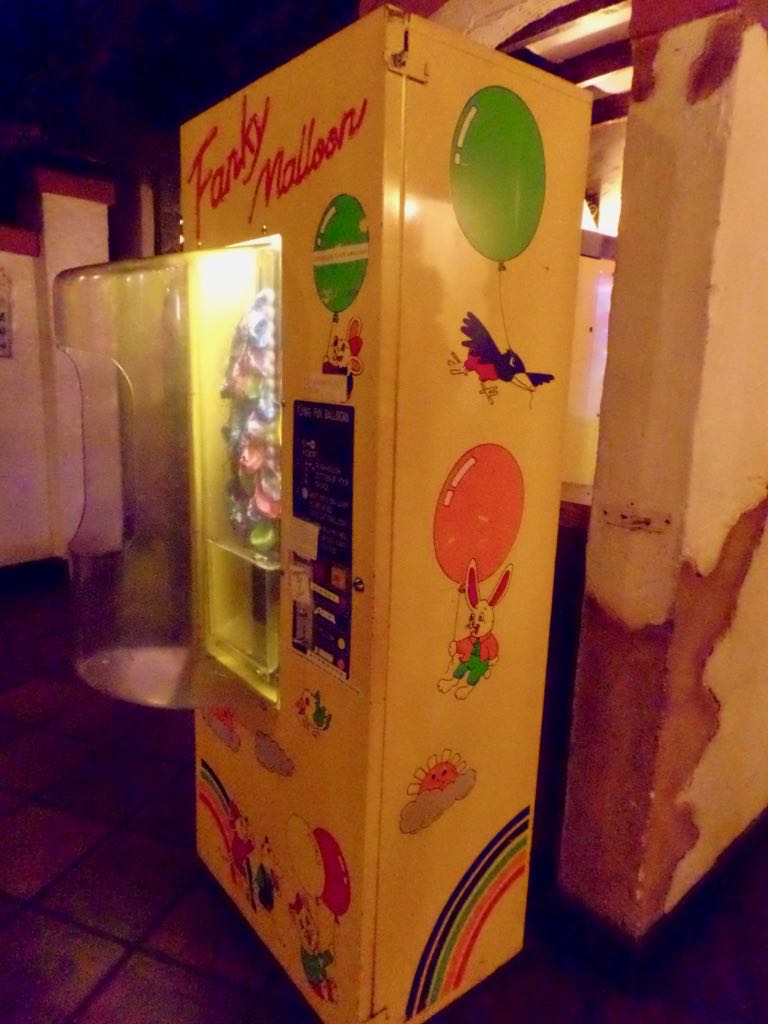 This vending machine promises ``Fanky Malloon''. I infer that there is a story behind this but do not know what it signifies. 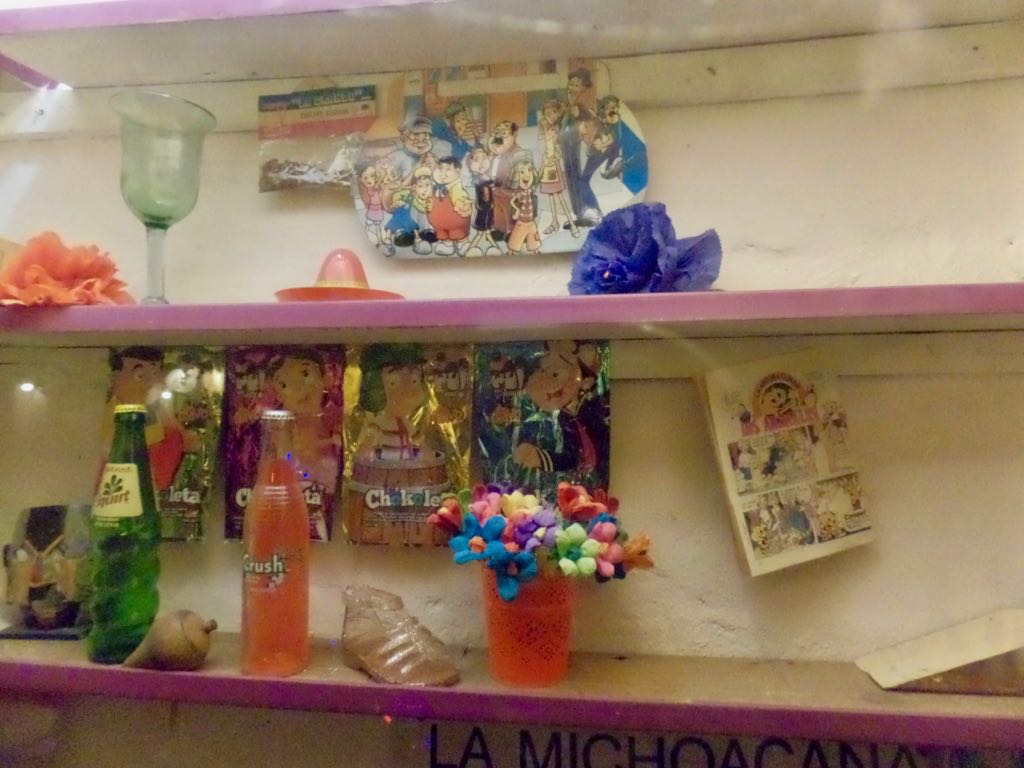 And around these vending machines are these shelves of ... well, let's call them vintage posters and adverts and trinkets. 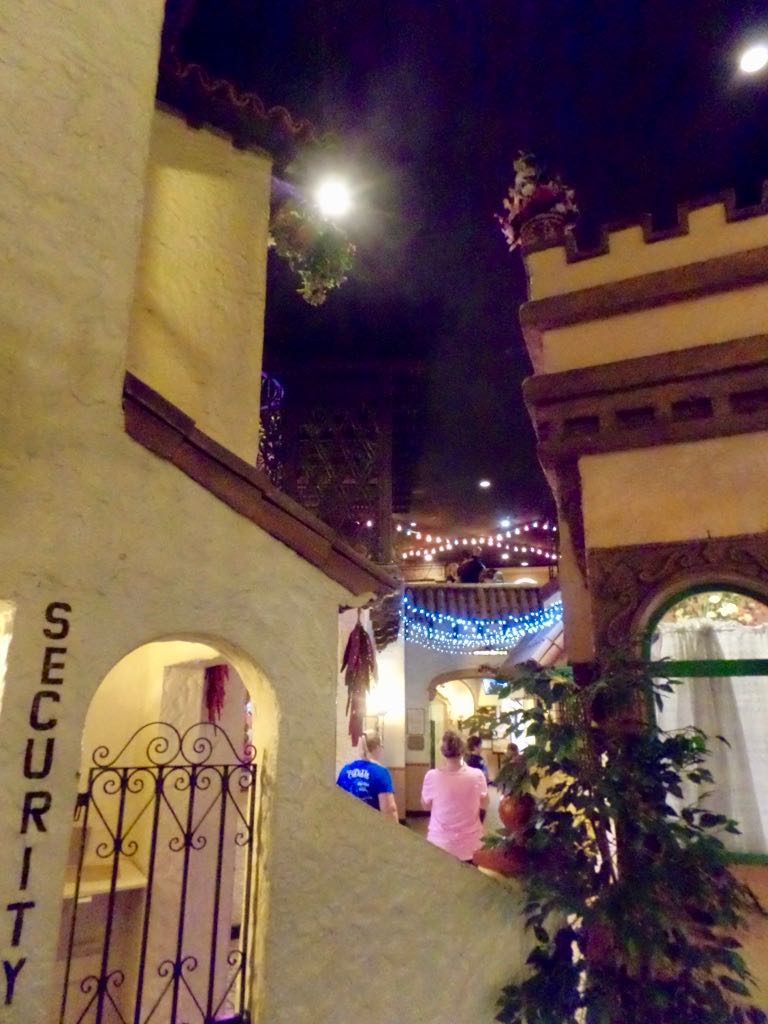 And a last glimpse at the fake town layout within Casa Bonita. Heck of a place.