As the bells ring out, everyone will shout, ``Happy New Year''

bunny_hugger's brother was going home. Not that we were driving him to the airport. Her parents are for some reason comfortable dropping off people at Detroit's airport, but not picking them up. But they needed the computer room to put the dogs into kennels --- they can't be trusted unattended for the potentially three or more hours they'd be unsupervised --- and so Sunshine needed to be out of that room, and so this implied our going home. So we did that. Weirdly, I was the first person up, so tried to find whether I could safely shower without preempting her brother's need for the shower. Well, I got away with that safe and sound. And we got back home pretty near lunchtime.

One of our other annual traditions is visiting the Crossroads Village, near Flint, one of those ``historical'' towns made by moving historic but uneconomical buildings somewhere they can huddle together. They always decorate for Christmas and the day after would be our best chance to visit. It was the warmest day we've ever visited there, which makes a nice contrast from days when it was, like, ten degrees Fahrenheit and snowing. Still, would like to go back to when 60-degree days in December happened, like, every eight years.

We got there earlier than usual, though not quite at opening. The parking lot was already full and we were guided onto the grass where we didn't even know there was space. We never feel like we have enough time and here ... well, again, we might have used an extra half-hour. But we did get to spend time lingering on a few things we've missed in the past, such as seeing the print shop actually working. They have a couple manually-operated presses and the woman there showed off printing (salable souvenir) sheets, these of to-do lists. They also had the forme for their Crossroads Chronicle newspaper. The front page this month was Who Cracked The Liberty Bell, with a second piece offering the recipe for Mrs Eldrige's Famous Sugar Cookies, so it's been a comfortably quiet season for the park.

What more than anything else draws us to Crossroads Village is that they have amusement rides. A C W Parker carousel, over a century old now, that runs at the design speed of six rpm. They advertise it as the fastest carousel in Michigan, which is true, although it's less impressive when you know the carousel population of Michigan. They also have a Parker Superior Wheel, a small Ferris wheel also run at high speed. As often happens

bunny_hugger got into a talk with one of the women running the perpetual rummage sale that supports the rides. This conversation revealed to us that there's a third Parker Superior Wheel in existence, although it's held in a private collection. (Also that the one in Tuscorah Park, in New Philadelphia, Ohio, has a modernized control system.)

Next was to get back to the front of the park, for the Christmas Train ride. This is the slow ride on their antique train though a series of light displays. It's always fun, especially as they keep adding new displays to make the ride even fuller. A couple years back they stopped doing the whole spiel in which every light show was given some story, maybe about the characters, maybe about how they got the lights, maybe both (they have one that's a juggling dragon, we think named Clarence, that was delivered too late for Halloween one year and so became the Christmas Dragon). Now they introduce a couple pieces and mostly play Christmas carols. It's all right but feels like they're missing out on some chances to form lore.

The Opera House always has a show. For years it was a Christmas Melodrama. Last year they had a magician. This year they promised only that it was a show, no hint to what. It turned out to be a comic-musical revue, featuring Snowy the Polar Bear, Mrs Claus, Frosty the Snowman, and Rudolph the Red-Nosed Reindeer. Between doing the songs you'd imagine from those last two cast members there was a running thread about Snowy wanting to be Santa this year, and Mrs Claus insisting that his job --- in the postal department --- was essential to the ``snow business'', a pun they used an estimated 3,532 times during the twenty-minute show. It was fun and pretty lively, with a surprisingly on-model Frosty the Snowman, and a Rudolph with a tail that looked like it was made by someone dying a Sonic-comic-book-universe fox costume darker brown and running with it. (Also in the very last number Frosty's nose didn't light up.) It was a fun piece, although there wasn't even a single line customized to the Crossroads Village setting in it. I can't blame them for hiring a professionally-written show, but I like some of that homemade feeling and hope they'll get back to it.

This took us to 9:00, and the park's close for the night. Which is good as the cold had me pretty near wiped out. I had nodded off on the drive out, too, which is quite out-of-character for me. That's how you know I'm never faking it when I say I'm sick.

So we went back home, eating more of the kettle corn that's also a never-miss attraction at Crossroads Village in December, and settled in for the night.

Trivia: Super Mouse's name was changed to Mighty Mouse in cartoons released about six months before his outfit changed from blue-with-a-red-cape to yellow-with-a-red-cape. Source: Terry Toons: The Story of Paul Terry and his Classic Cartoon Factory, W Gerald Hamonic.

PS: And now we emerge from Casa Bonita back into the less-unreal world. 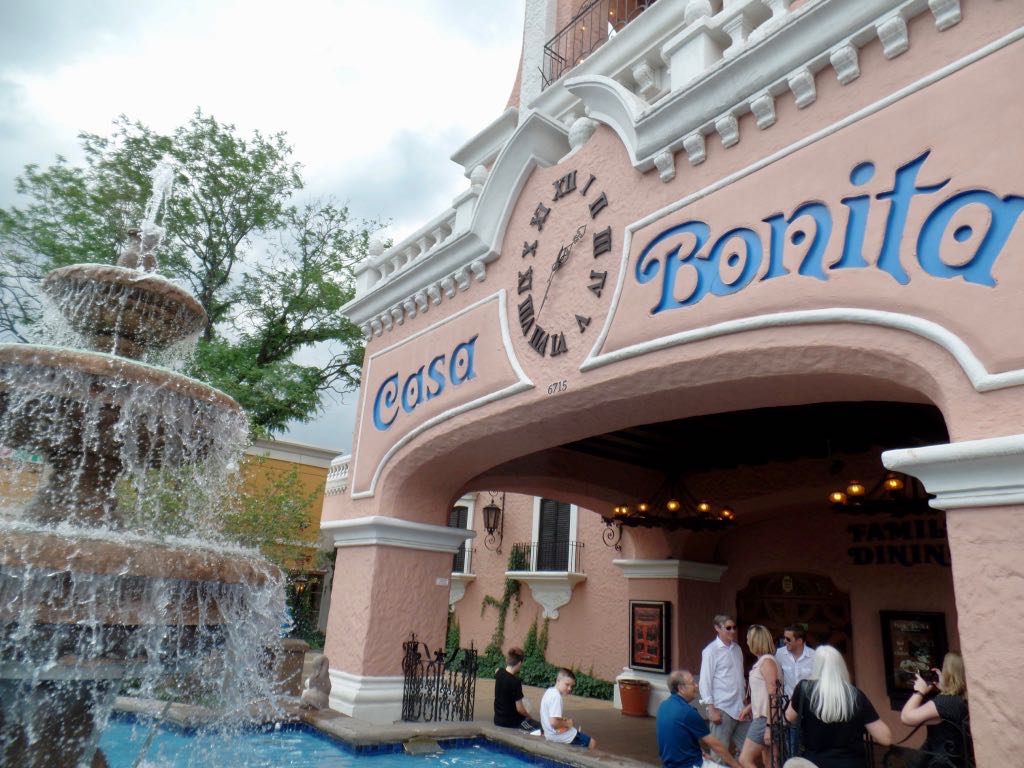 The fountain and the front of Casa Bonita; also, from this, I learn that I had adjusted my camera's clock to Mountain Time, so that's good. 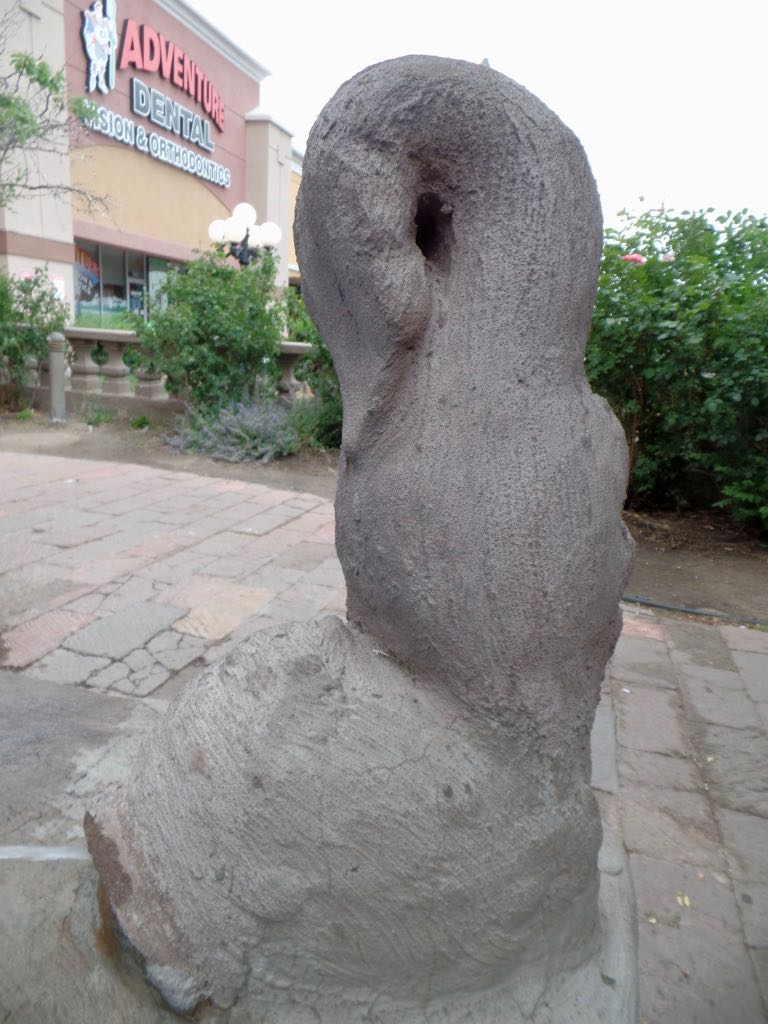 Fountain-side sculpture outside Casa Bonita. I'd had the impression it was a goose or other waterfowl although I don't know how I could justify that impression. 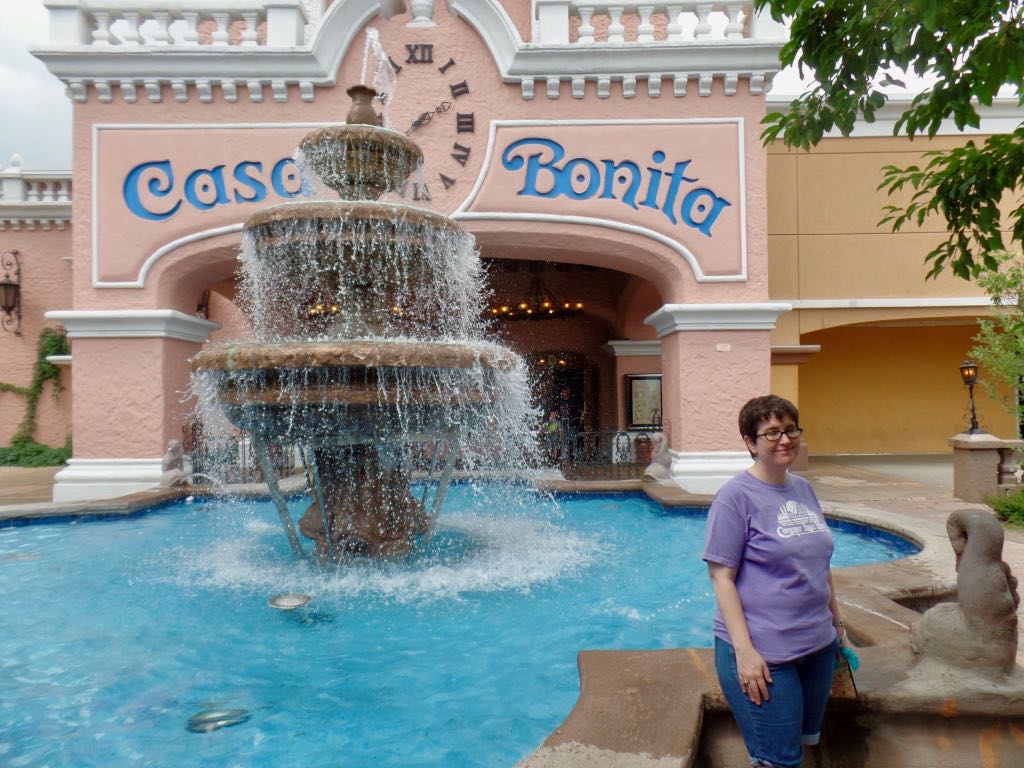 bunny_hugger enjoying a moment near the spray of the Casa Bonita fountain.