And above all this bustle you'll hear

bunny_hugger to do the same. She runs quarterly charity tournaments; December's, Silver Balls in the City, is the oldest. This year's would be the fifth. She likes to hold it a weekday between Christmas and New Year's, but with the Wednesday Christmas the only good weekdays were Thursday, when the bar usually hosts a punk show, or Monday, which nobody likes. She scheduled Saturday, which for three years running has been a karaoke night at the bar, and then two weeks later the bar announced they were holding a punk album release party with five bands performing, we think not all at once. This did nothing to help her anxieties about running the tournament.

We made accommodations. It would start at 3:30 pm, a half-hour after the bar opened. She asked the bar if they'd open early, as they had the month earlier for MWS, and they said no. All right. She set it for a progressive-strikes tournament, the most popular and coincidentally most lucrative-for-ratings-points format of the day. But only nine strikes --- you play until you lose to nine people total, which can take as few as three, four-player, games. More strikes would make the tournament more attractive, but also run longer. And the show posters said it started at 8 pm. We couldn't get an answer whether that was when the doors opened or whether that was when the first band was supposed to play. We suspected it was doors open, with the first band playing at 9, but we couldn't get a clear answer first. This had some unfortunately consequences. We had people express an interest in attending, but have to turn it down, on the grounds that they didn't want to play who knows how long at a punk show. Some folks had kids and while we could promise they'd almost certainly be knocked out of the tournament before the show started, they didn't want to risk it. Such is the optimism of the new player.

Also a stressor for

bunny_hugger: the Frosty Fest tournament a couple weeks back, and its surprise second-place finish for TY, leapt him into the top 24 in the state. And knocked her out. Another player's strong finish in some other stuff bumped her down to 26th place. The top 24 play in finals. After being in a slump for the first half of the year, she'd come back with some impressive finishes, particularly in Fremont in October; to be knocked out of the state championship in the last month is heartbreaking. And symbolically bad, as she's the top woman competing in Michigan and if not a single woman rates among the top 24? That's just not just. It also adds a nasty political implication to the State Women's Championship being introduced (to all states and Canadian provinces) next year: the notion that women can't compete without special support.

Silver Balls is not a major tournament. But it is big enough that a finish in the top two, maybe top three, places would get her back in. Group progressive strikes is tough, but, if you can average a second-place finish, you can get into the final four quite well.

Me, well, I don't have anything much to prove. A first-place finish might let me creep up on PH, in 12th place in the state, but all I really have to do is ... try to play through my lingering cold, which has left me cranky and sore. It's a rough thing. Partway through the tournament the web site which we were using to track all the games stopped responding. With everyone gathered around waiting for the next rounds of play to be announced, and time of the absolute essence, I started pulling together the notes we'd need to carry on manually.

bunny_hugger started to say that was a bad idea --- it would be a great royal mess to reconcile a manually-drawn round if the server came back --- and I hollered ``fine'' (or something like that) and stormed off to a dark corner to sit with my eyes closed a few minutes. It's not a moment I'm proud of. The server came back in a few minutes, mercifully, and we could carry on.

I started in a three-player group, the best of all options, since you can only get two strikes in one of those. I got two strikes playing Elvira's House of Horrors.

bunny_hugger started out on Metallica, which she hadn't played in months, and got third place (of four) by a pretty narrow margin. It's a heartbreaking start and of course in the second round we played each other, plus two other people, on Indiana Jones. It's a lousy round for all of us, but especially

bunny_hugger. She takes three strikes; I take two. She's already more than halfway to being knocked out. My next round is a Tales of the Arabian Nights which gives me only one good ball, but it's good enough for a first-place finish. Then AC/DC, where everybody plays a great game and my great game takes second place. Then Getaway, where everyone has lousy games but I squeak out a win by stopping trying to play for the high value stuff and just get a lot of low-value things. After five rounds I have five strikes, a record that could still land me a high finish.

So on Medieval Madness, a game I and everyone knows inside and out, I put up a super-sucktacular game, finish in last place, and jump up to eight strikes. I have to win every round now, or go home. My next game is The Addams Family, and I do not win. I don't even get second place. I'm knocked out, finishing in a two-way tie for 10th, of the 22 players.

bunny_hugger? After Indiana Jones she went to a three-player group on Iron Man. She gets the Iron Monger multiball going, for a respectable score. Both her opponents have third-ball rallies and smother her score. Next round: another three-player group, this time on Iron Maiden, a game she hates. But she gets a multiball started and ... gets a second-place finish. She's on eight strikes after just four rounds, and has to win everything or be knocked out of her own tournament. The next game is Ghostbusters, which has a great theme and eighteen major shots, all of which are impossible. But if you happen to be in the groove, you can put together a nice little lead that holds --- never mind. She takes last place, two strikes, and is out of the tournament. She ties for last place, a dismal finish that won't help her get into the state championship. And that does fuel her fears that she will never be good enough to rate a state championship position.

Well. There's consolations to being knocked out. For one, it's so much easier to run a tournament when you're not competing anymore. For another, there's returned friends! GCB and her partner CMT, who moved out of Lansing over summer, are back for the holidays and they chose to spend one of their days with us. They've moved to Seattle, and fallen in with that extremely competitive pinball crowd. It maybe makes a difference: CMT has a great tournament. Also SMS, daughter of pole-barn owner MJS, is there. She used to be the top woman competing in the state, and left the hobby, partly due to work obligations. She's certainly not lost her skills: in the first round she holds up everybody as she puts in an incredible game on Scared Stiff, the kind that gathers people around to watch and applaud, and that ends with three extra balls (which she's not allowed to play). She finishes the tournament ahead of me, in the three-way tie for 7th place.

And the tournament pace stays good. I admonished everyone at the start to not dither, and people do not. Despite the server glitch things keep moving, and the number of players not knocked out keeps dwindling. We are down to the last four players by 8 pm, as the bar starts carding people (fun, as one of the competitors still in is the underage JRA; he keeps away from the doors and tries to look boring) and bands start wheeling in instruments and speakers. Apparently the music starts at 9 pm.

We're down, finally, near 8:30 to four players. MWS with five strikes. RED, CMT, and JRA with six, seven, and eight strikes respectively. They're on Deadpool, a notoriously long-playing game especially for MWS, RED, and JRA. And note how I said CMT was having a great tournament. I notice that if they finish in one particular order, MWS could win first place and everyone else tie for second. Or, another other, everybody could end up tied with eight strikes, implying one more round. Other finishes would not be such logically neat arrangements. But still: whatever happens we should be done before the show gets very far. Maybe before it even starts.

We get the fastest of all possible resolutions. MWS wins, JRA gets second, CMT third, and RED fourth place. MWS wins the first-place trophy. JRA, CMT, and RED all tie for second and agree to take the tie rather than play it out. The International Flipper Pinball Association will record ties for any position besides first place. The only point to quarrel is that

bunny_hugger made ornaments for the second- and third-place finishes; three people have to decide how to split these. RED says he'll go home without one. JRA offers to take third. CMT gets to take second home to Seattle. I may have RED's and JRA's positions wrong; it doesn't matter. What's important is the tournament is done and happily finished by 8:45.

bunny_hugger had said she'd bring her American Doll miniature pinball machine in to be the tiebreaker. But she reasoned that it wasn't possible to have a meaningful tie in a strikes tournament. We forgot that it was possible and it's a shame because The Flip Side is a cute, quick game and it'd have been fun to see. Maybe we'll use it for March Hare Madness.

We stuck around a little while, although I was tired and cranky, and

bunny_hugger was tired and hungry and disappointed in herself, and the bands were warming up and testing equipment but not, as of a bit after 9 pm, actually coherently playing. So while it hurt to say goodbye to CMT and GCB so early, when we hadn't seen them in half a year, it seemed better to do that than carry on.

We go home. I'm neither helped nor hurt in my position, holding at lucky 13th in the state.

bunny_hugger has missed the chance to get back into the top 24 in the state. There are three significant tournaments left in 2019. Two of them are the next day.

Trivia: The Allied invasion of Sicily made no plans for feeding the civilian population, on the assumption that there was a working agricultural industry on the island. There was not. Source: The Long Road Home: The Aftermath of the Second World War, Ben Shephard.

PS: Some more of the first walk into Lakeside Park. 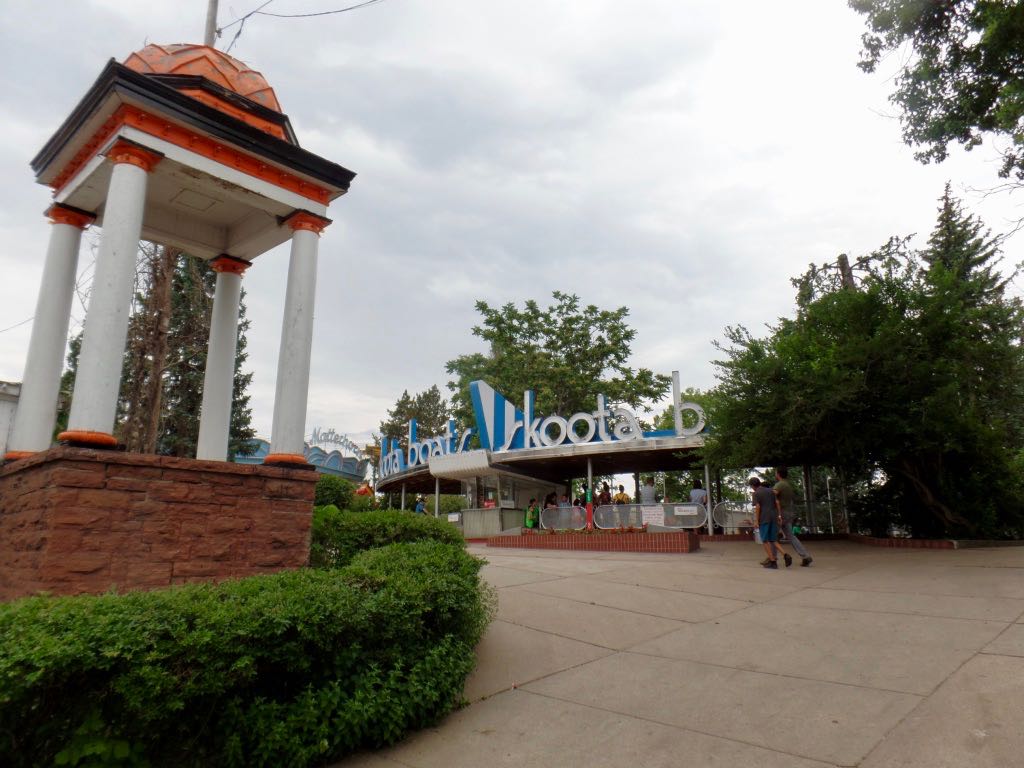 A simple decorative stand on the left (1x1, $50 decoration in Roller Coaster Tycoon 3), and beyond there the Skoota Boats, a bumper-boat ride built out of what used to be a Shoot-the-Chutes ride. 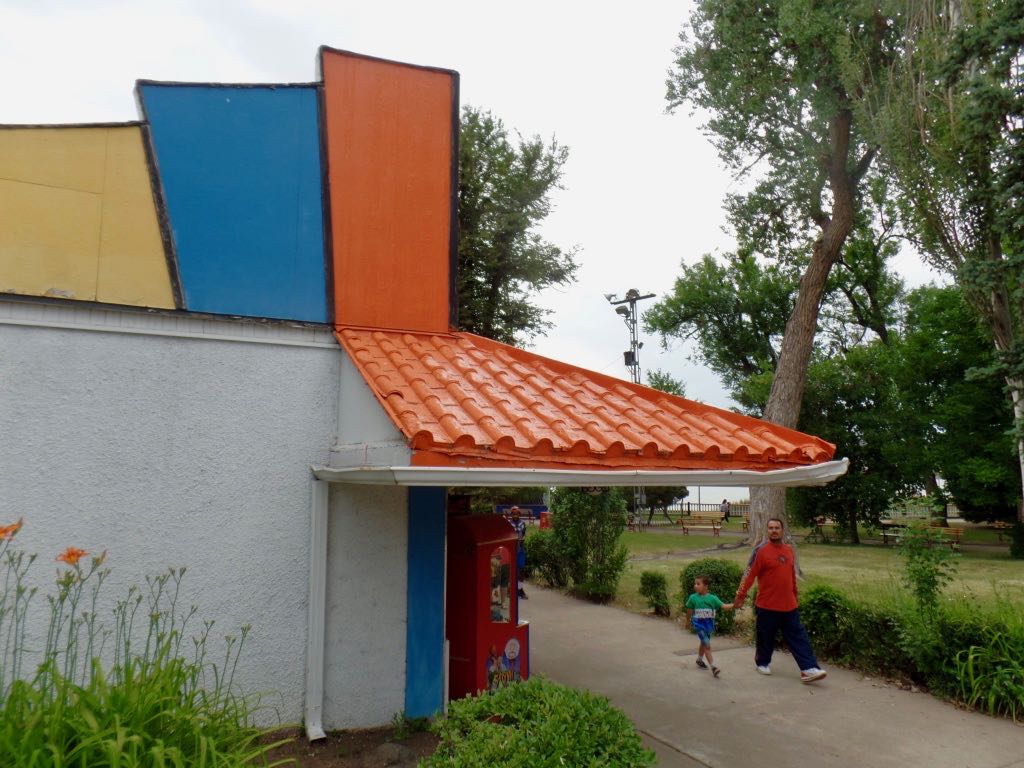 Overhang of one of the midway game stands, with some flowers, looking down on a path so that the people walking past seem extra tiny. There's a lot of good angles at Lakeside Park. 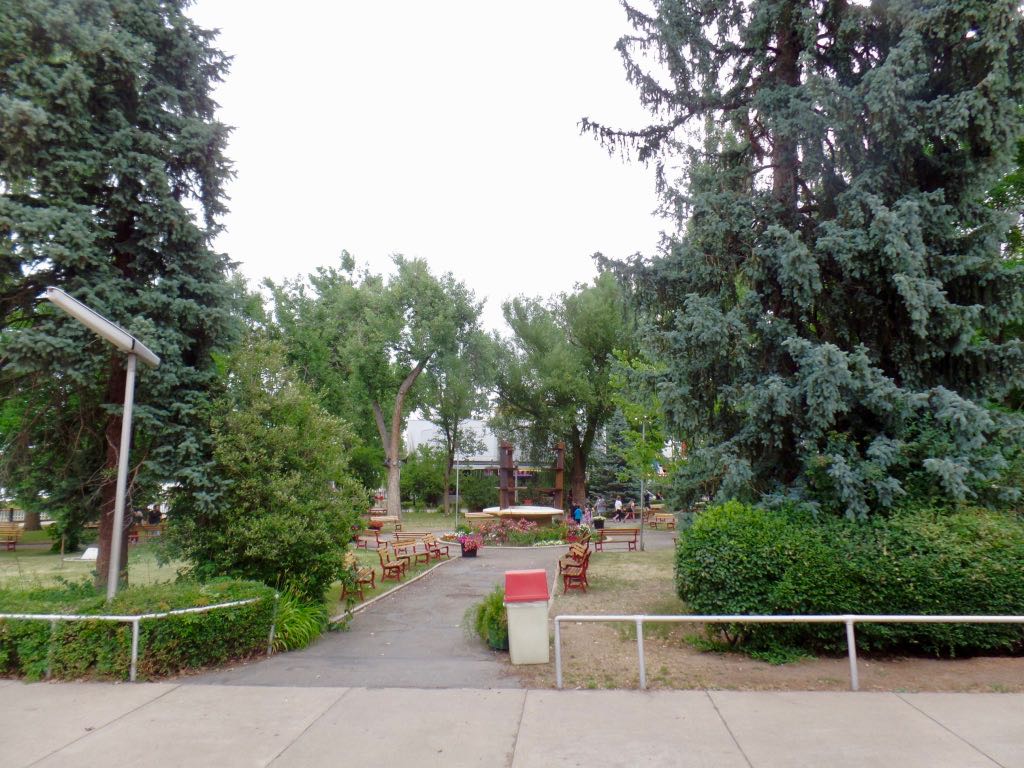 Looking in at one of the scenic park/rest areas in the midst of Lakeside.