If the rain comes they run and hide their heads, they might as well be dead

So a little surprise thing I did for

bunny_hugger Christmas Eve, in that little window when I went back home for the board games and cards and other forgotten things. Her windshield wiper blades have needed replacement. I'd previously bought new Rain-X Quantum blades, but never found time to install them. I e-mailed her to say I was home, was there anything else I should pick up, and figured to wait a couple minutes before heading out. I used the time to install the blades. On the last Sunday of the year, as we drove out to Fremont for the twin tournaments --- and the best chance

bunny_hugger would have to get back into the top 24 slots --- through the light-to-medium rain she said we should put the blades on. I told her I had. She realized that was why the wipers were getting the windshield so much cleaner. Also, uh, what's that thing on the passenger-side wiper? Before I could figure out what she meant, it flew off, onto the highway on-ramp. I didn't know and guessed it was something protecting where the J-hook of the wiper arm connects to the blade, but not essential. We drove the rest of the two hours (slightly extended, due to weather) without incident.

The incident came about twenty minutes into driving back home, after about eleven hours of play and quite cross with the results, and growling at each other over it all, and cursing ourselves for having gone out: the driver's side blade was coming loose. We stopped at the next lit thing --- the driveway of a volunteer firehouse in Bailey, a town consisting of the volunteer firehouse and a post office as best we know --- and I swapped the driver's and passenger's side wipers, trusting that if one were to fall off entirely, better it was my side of things. I put Meijer's into the satellite navigator and we drove towards the next big city, Grand Rapids --- hometown of the Meijer corporate empire --- wiping the windshield as little as possible. Happily, Rain-X Quantum blades secrete that Rain-X fluid onto the windshield, so the rain beaded up and slid off even with less wiping. The fog was the bigger hassle.

Ah, but, we made the final approach to the Meijer's on Alpine Avenue, and ... it was no Meijer's. It was a gas station. Not even a Meijer's Gas Station. Fine. I cursed everything and searched the satellite navigator for shops named Meijer's. This took us to I-96 in the direction away from Lansing, but just a mile, that's all right. This took us to what turned out to be the Meijer Corporate Headquarters Complex. This was fun to see, especially the great big glass windows in front of a mural of old Meijer logos and corporate art and stuff. But, still, for a shopping location named Meijer? Total failure, satellite navigator. It did say there was another Meijer's a half-mile away. This proved to be the regional distribution center and, again, a place you could not go to with cash money and buy a windshield wiper blade.

I searched anew, and this time took directions to a Meijer Pharmacy, trusting that there's no way that is anything but a place that has a store attached. And this time it was! While

bunny_hugger sat in the car in the rain I went inside to buy a new 21-inch wiper blade.

Out in the rain again, as I put on the new blade, the little protective case --- the one that flew off at the start of the day --- came off in my hands. I kicked the corralled shopping carts next to us.

I stormed in to the Meijer's and marched to the Customer Service desk. It had closed at 10 pm, over two hours earlier.

I went to the guy supervising the self-checkout lanes, the only lanes still open, and explain the situation. He says it's no problem if I go get a replacement blade. I decide --- the driver's and the passenger's side blades on

bunny_hugger's car are different sizes. I decide to buy one that's passenger-blade size, since that one went on without complaint. The correct driver's-side blades have broken twice in a day here. I cannot justify why the blade size should make the slightest difference. But I also am unwilling to go through another round of this. So I grab a 19-inch, rather than 21-inch, blade. What I do not realize is I grab a Rain-X Latitude blade, rather than a Rain-X Quantum. These are a little cheaper. The self-checkout supervisor notices I got a different blade size and, thus, wants to ring this up properly.

So he goes to the Customer Service counter and activates one of the sleeping registers where it ... can't read my original receipt. He tries again, and tries entering the transaction number manually, and the system claims the transaction did not exist. Which he agrees is nonsense, even before I can point out how this doesn't make sense. But he can at least carry this out as a receiptless exchange and deal with the issue without me. He does need my driver's license to record my name and address, though. This all reveals that I have a refund coming of let's call it $3.80. There's no such money in the customer service desk register. But he can put it on a gift card, that's as good as money for how often we buy stuff from a Meijer's. It ... doesn't go through. He has to re-do the whole transaction, and consult my license again, before I get the card. I come near forgetting my driver's license, too, but the guy remembers before it's inconveniently late for either of us, mercifully.

And this wrong-size blade? That one goes on easily, and snaps securely in place, and gives no trouble for the rest of the ride.

About a mile down the road, I ask: what did I do with the old, defective blade? I didn't bring it in the car.

bunny_hugger thought it flew off the hood of the car when we left the parking lot and had no spoons for collecting it. I accept this, cursing the loss of the chance to bring the defective blade back to Meijer's for satisfaction.

The next day I discover the defective blade was not lost in a Meijer's parking lot somewhere in Grand Rapids. It had secured itself in that little niche between the car hood and the windshield, underneath where the wiper blades rest. I dig out the receipt and packaging from the recycling bin, and that is waiting for me to deal with later.

I am sure there are people who can put a windshield wiper blade on a car without it taking a thousand words and 45 bonus minutes of hassle. I am apparently not among those people. I have no explanation for this phenomenon.

Oh, also there was pinball during all this too.

Trivia: In February 1938 the A&P chain operated 13,200 stores, with a total annual profit of not more than $2,000 per store. Source: The Great A&P and the Struggle for Small Business in America, Marc Levinson.

PS: What's distracting us on the way to buy tickets to Lakeside Park? 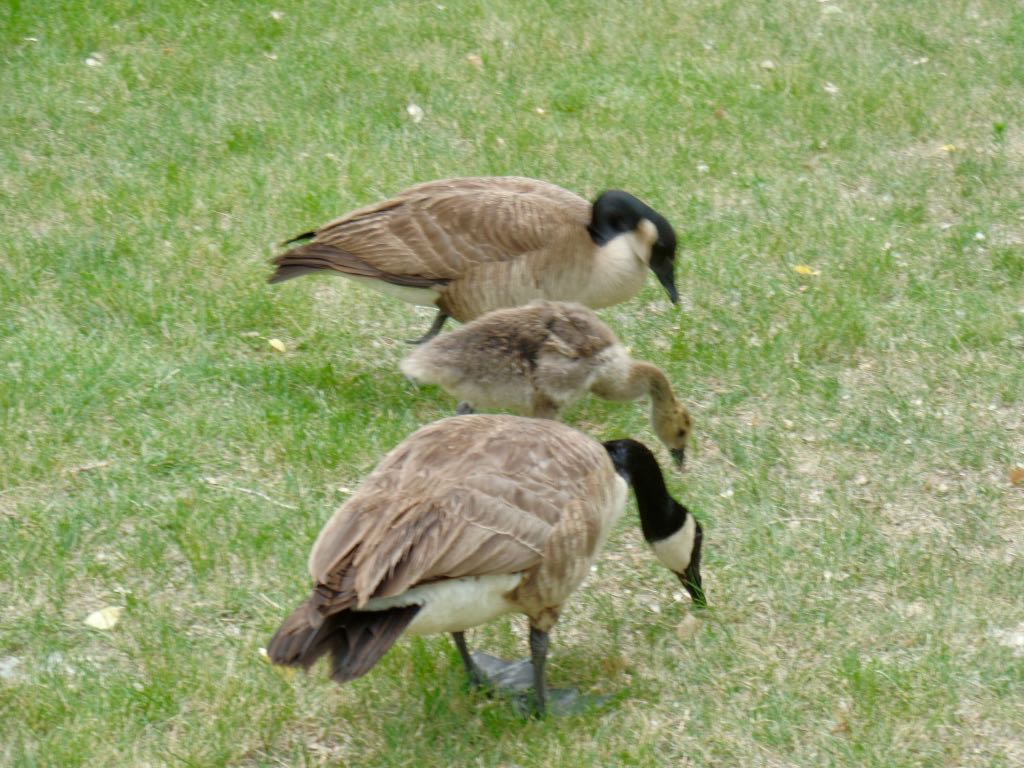 Geese! So there's a lot of green space at Lakeside, and the waterfowl are happy to use this as a place to raise their children. 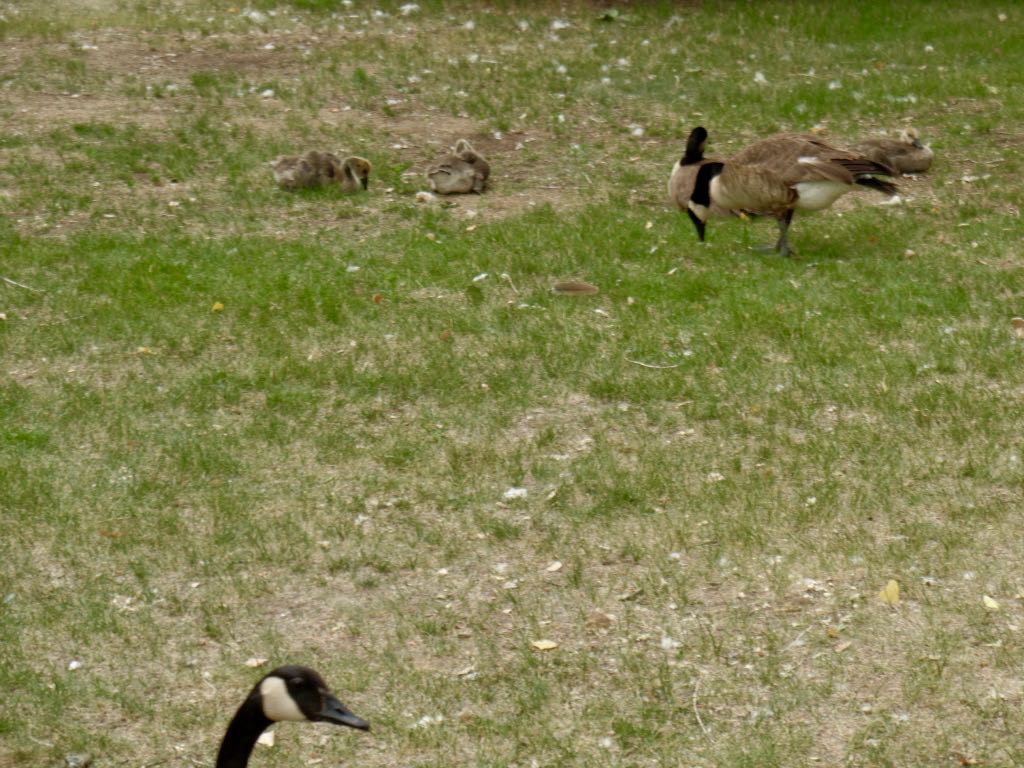 We could compare the goose families with many children and those that had only the one or two goslings. 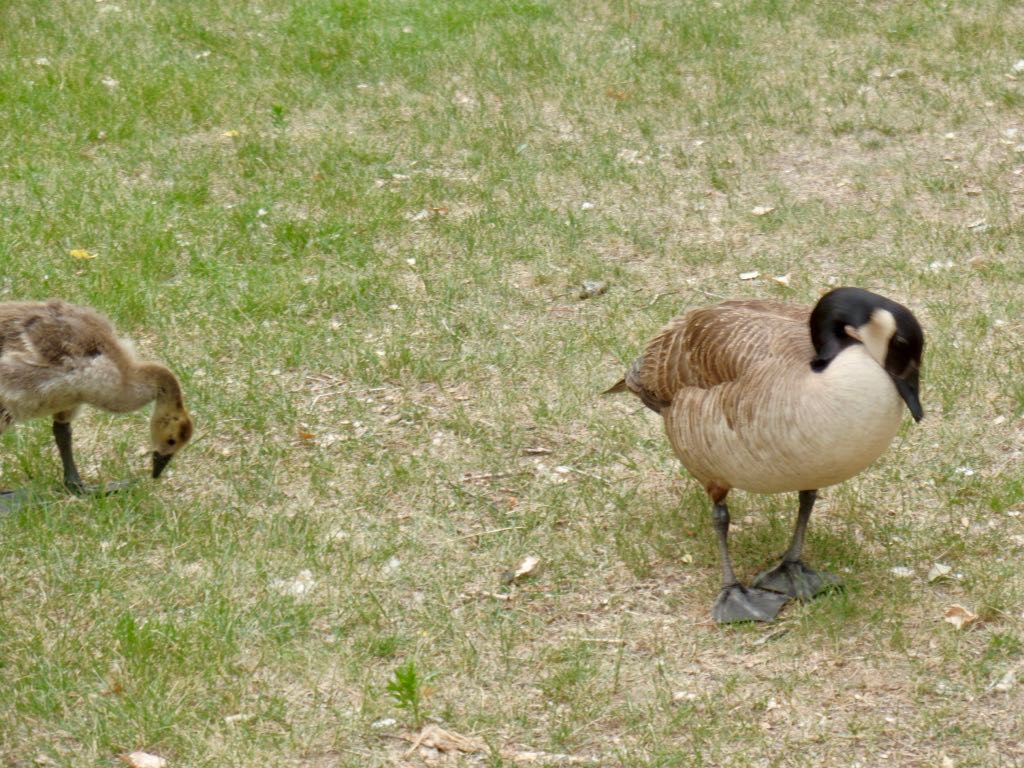 Here's one of the parents of a lone gosling.