But people after all, start out as being small, and we're all a boy named Charlie Brown

MJS started holding a tournament in his pinball pole barn in 2015, the same year

bunny_hugger started Silver Balls, to give both the chance to make state championship that year. MJS hasn't been in the running for state championship since, but he's kept the tradition going. It's fun to have a party in his house and get his pinballs some attention and appreciation, and he puts on a great party. We'd be going even if it weren't

She is resigned to having failed. And, with reluctance, I agree. The tournament is a six-strikes head-to-head format. Two players, one finishing a match happy and the other getting a strike. It's going to attract a lot of really skilled players, her among them, but to finish in the top four, like would get her in for sure? Or top 25%, which might be enough? That would take a strong performance under a lot of pressure, and

bunny_hugger does not thrive under pressure. She still has the morale-crushing taste of Fremont's near-misses in her mouth. She also has the taste of a root canal in there, part of Monday's chaos. We bring Sunshine and Fezziwig to her parents' house and have lunch and go to the pole barn expecting to do nothing but see in the new year and hope that is enough.

We start out. I'm on Bronco, an electromechanical, against a guy I've never seen before, and have a nice easy win. The next round I'm on Royal Flush, another electromechanical, on another guy I don't know. Another easy win. Next round is Attack From Mars, against CST. He puts up four billion points the first ball; it's a score I can, in principle, match, but I don't have high hopes. I don't come near catching up. Next game is Meteor, an early solid state game, against MWS. We both have terrible games, but his is less bad. Four rounds in and I have two of my six strikes.

bunny_hugger has one strike. She started out on Grand Prix, an electromechanical, and won handily despite losing her last ball unnecessarily. Her second is on Super Star, a quirky electromechanical that she hates, and she wins handily on that. The third round is her first loss, on Jungle Princess --- the game from my Pinburgh 2017 finals tiebreaker --- against JP, the guy who took third place from her in that one Fremont tournament two days earlier. Her fourth game, Simpsons, recovers her spirits, though: she wins this one and pretty well. And then in the fifth round she gets the happiest of possibilities: a bye. There are 41 players; someone just gets to hang out, eating cheese, while twenty other games go on. Me, I'm put on Jungle Princess and get back to a win.

Sixth round. I'm put on Monster Bash, a game I know well. I'd played it at MJS's November tournament. It was brutal then, though. Today ... it's brutal once more. But I'm doing so badly that I'm playing novices, and my lousy score is enough for a win. Two strikes after six rounds isn't great, but it's the right path. On to Dirty Harry, a game I can't lose on. I lose on it. Then to Family Guy, which, oh, at least I can manage a recovery here. No; my opponent has a killer first ball and I just don't get back from there.

Fine. Next game is Shadow, against DUB. It's a tough game, relying on a couple of shots --- some lower ramps, and a side scoop to start multiball --- that are really hard. DUB puts up a great score. All I can do is a lot of wood-chopping, to use the term: carrying on getting enough safe shots for long enough. And, to my amazement, I do, pulling off a final ball with enough bonus to win this one. I may just pull out this tournament after all. Round ten: Cheetah, an early solid-state with one objective, that I know well. There's this bank of drop targets numbered 1 through 5. Hit them in numerical order, and repeat. I almost get through one cycle of this, and take a loss. I'm on five strikes. I'm drawn on the Zaccaria game Time Machine, against somebody we never heard of before. This, all right, I can play. From the left flipper, shoot the ramp; it builds the bonus multiplier up, ultimately, to 20x. From the right flipper, shoot the drop targets; this builds the bonus base up. I manage none of this and take my sixth loss. I'm out.

bunny_hugger? She's called up on Bronco and, hey, has a win. Then Earthshaker, a late solid state and another win. Banzai Run, which she never wins on. She wins. Time Machine, against MWS: he says her first ball beats his normal game. Whitewater, a modern game with many ways for things to go wrong: she wins again. Cheetah, again against MWS. Here I've eaten enough Win Schuler's cheese spread to console myself and am offering advice. She has gone through 11 rounds and taken only one strike. She's been sitting in first place among the whole tournament most of that time.

I know what this means. If she can make it to the top ten she's probably in the state championship. There are something like twenty people left in the tournament, but many of them have four or five strikes. If she just plays all right the rest of the day she might make it. I don't tell her this. I know how nervous she gets when she's told she's playing well. There is no reason to screw up her mojo.

She has enough trouble anyway. She's finally drawn against CST, who's such a killer player. But the weaker people are falling out of the tournament. They're on Royal Flush, which she's got a fighting chance on. She loses, though. Her second strike. Next round: she plays CST again, this time on Terminator 2. She's never played this enough to have a real handle on the strategy. It's an early modern game, one that plays hard in the way a lot of late solid-state games do. I try offering advice on what might match CST's scoring and jackpot and all and it doesn't help. She takes her third strike. CST hasn't dragged her out of first place yet, but he's getting there.

Next round, mercifully, not against CST. It's on Cyclopes, an early-solid-state from Gameplan.

bunny_hugger has the flow of this game, though, and has a compelling win. She's made it to the top ten. I silently celebrate: this is the sort of finish that would wipe out any doubts that she can compete with the serious players.

She's back against CST, this time on Pop-A-Card. It's one of the older electromechanicals. Its neat gimmick is that it's fairly easy to earn extra balls. She's able to earn one, but only the one; CST wins again and she takes her fourth strike. But other people are taking strikes too. There are seven people left in the tournament.

She's put on Fish Tales against MSS. MSS is one of the top players in the state. But he has an awful first ball. She does too, but MSS takes awful first balls worse than she does. He will play aggressively, is the lingo, and will tilt games more than other people do, and he stays upset at games longer than is productive.

bunny_hugger manages a barely OK game, but MSS has a lousy one. She wins again. She's on to round 17. She's one of the last five players. She finally notices how well she's doing. And realizes the same thing I have: even if she were knocked out now, she probably has had a good enough score to squeak into the state championship. The normal logic of pressure and tension and expectations is void. There is nothing to be nervous about. She has done everything she could have hoped for.

She's called on Road Show, playing MJS, the owner of the game and the pole barn. Neither starts off with very good balls and she's disheartened by that. But she has an okay game, that MJS can't quite make. He's also knocked out.

Round 18. There are three players left: CST, MWS, and

bunny_hugger. CST gets the bye. They're playing Monster Bash. I warn

bunny_hugger how the game is playing, and while I don't wish MWS ill, I do want him to lose. He kind of does too, but he can't just do that. He actually has a good game on the hard table, and gives

bunny_hugger her fifth strike. Her first strike by CST in fifteen rounds.

bunny_hugger gets the bye. She cheers: this is as good as a win. MWS and CST are playing Whirlwind. It's a late solid state game, and one prone to ... not quite house balls. Balls where you hit one switch and drain, losing the ball. CST does this his first ball, losing the ball for having made the skill shot. MWS puts up a lead of about two million points by the last ball; a million points is an average game on this. Still, CST is the clutch player. As he walks away with his two-million-point lead, on a game where CST has so far put up half a million points, MWS shakes his head and says it's not enough. I agree.

bunny_hugger is nervous, and rooting against her better friend MWS because, well, MWS has five strikes and the tournament gets even better for

There are two players left in round 20. CST has three strikes, taking the lead of the tournament from

bunny_hugger has five strikes. The game: Tommy, a modern game based on the 90s stage musical version of the play. It's a game that experts will do fantastically on; for mere mortals, it's a rough one.

bunny_hugger has a fair game, but nothing like what CST can match. He beats her, pretty handily.

She is not upset.

At the eleventh hour --- figuratively, and literally, as it is just past 11 pm New Year's Eve --- she has put in the clutch performance. We don't know what the numbers are exactly. But we know she has earned enough to get into the state championship.

She has had exactly the finish she absolutely needed.

Trivia: In 1912 Robert Peugeot offered a prize for a winged bicycle which could get to speed, take off, glide ten meters, and do the same in the reverse direction. It was won in 1921 by Gabriel Poulain, pilot and bicycle racer. Source: Prime Mover: A Natural History of Muscle, Steven Vogel. 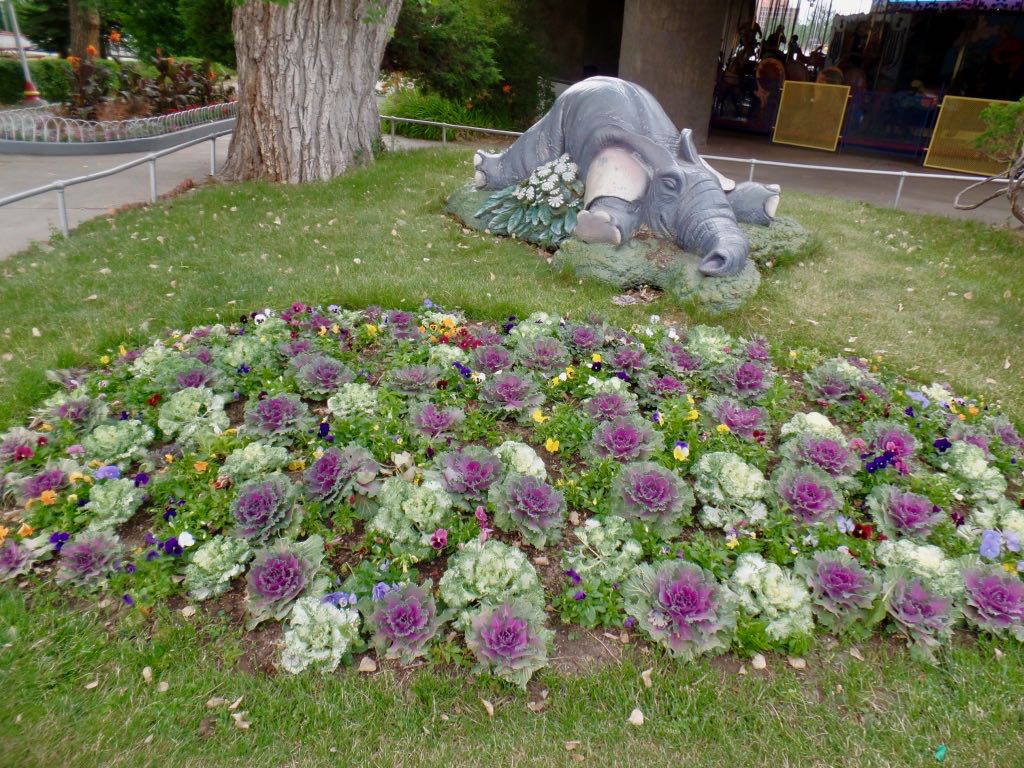 Flower bed and resting elephant statue that's outside the Merry-Go-Round. 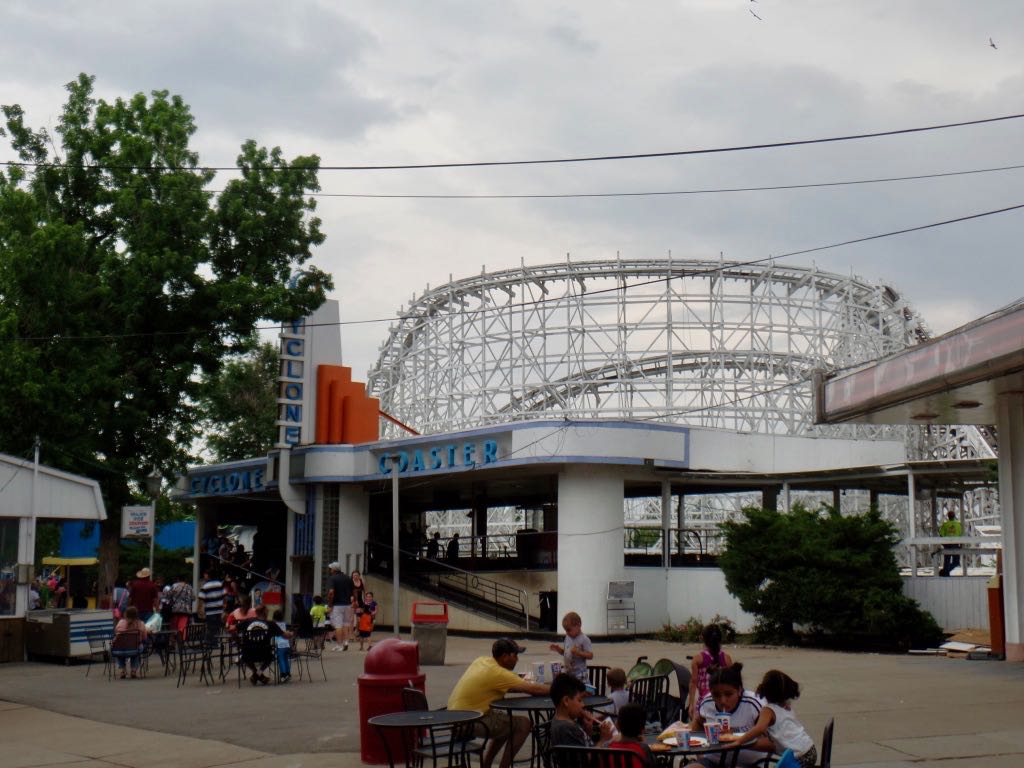 A look from the midway at the Cyclone Roller Coaster, and its just gorgeous station. 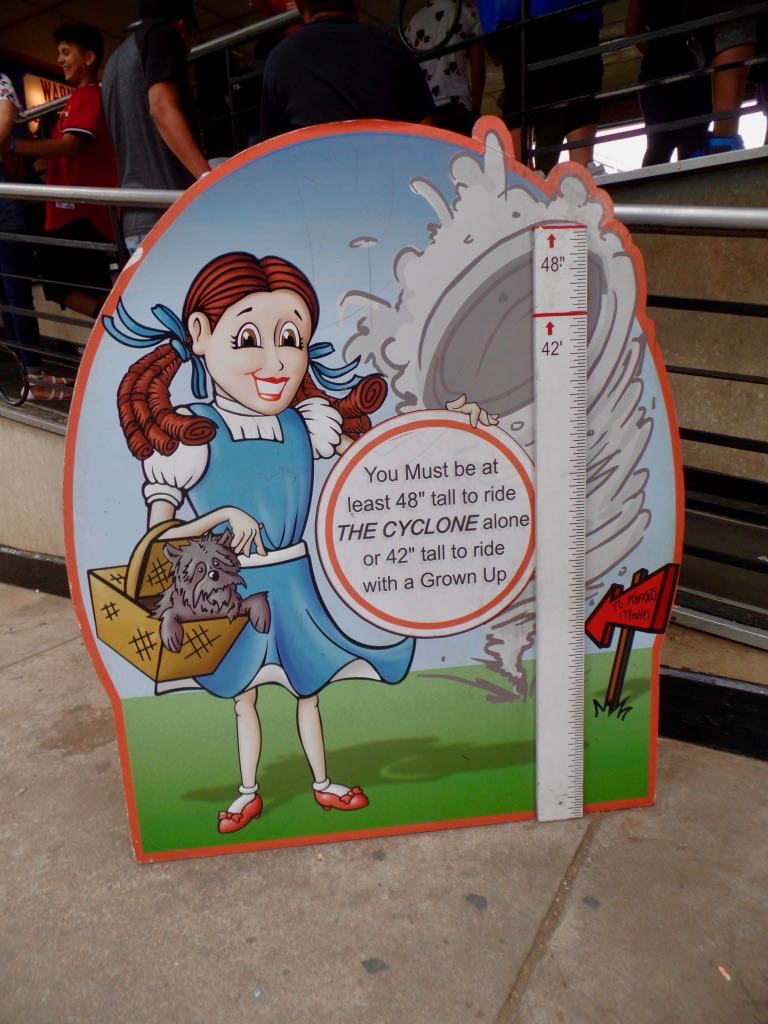