bunny_hugger's New Year's Eve tournament triumph came with an hour to go in the year. It was as eleventh-hour as could possibly be. Everyone around her estimated the calculations and what this would do for her position. I thought a bit how CST was now certain to overtake me, knocking me out of the lucky 13th spot I've been squatting in for months. He deserves it, being far better than I am, but he's played few events this year. My slender lead on him reflects endurance alone.

Still, it's a happy last hour of the year. We start some dollar games; as the worst finisher in the tournament I get first pick of what to play, and lose. Another game, Fish Tales, runs up to the brink of midnight so we pause it, while our hosts pass out noisemakers and champagne glasses (which run out before I can get one). We cheer to the ball drop as seen on their TV, which is streaming, so the people with cell phones out tell us we're twenty seconds behind.

Then to fireworks! MJS has a couple sets that he fires off from his large yard, behind a row of evergreens decorated as trees. Most of us just run out to see it, accepting a few minutes of hanging outside near freezing temperature.

bunny_hugger rushes to get her jacket, and mine, and misses the first battery of fireworks. She can't find me, and in the fuss does momentarily lose a rabbit brooch she's wearing for the first time. We find it after some retracing her steps. She also does not lose her camera lens, though not for want of trying. With everything resolved we finish the Fish Tales game, and I manage to get a pretty solid win considering I don't get any of the really big point-worthy things. We spend another hour-plus playing dollar games as the party winds down, closing on FunHouse. I realize I missed my traditional post-midnight game of Centaur, but, we can't always do everything the same way each year.

We stay at a hotel in town. In the morning,

bunny_hugger and I, and MWS and RED, go out to Cracker Barrel for what is our traditional New Year's brunch. This also took a traditional really, really long time since everybody else has the same idea for New Year's. RED had a poor night's sleep, as he roomed with MWS, a world-class snorer who started 2020 in Olympic form.

bunny_hugger about her 11th-hour performance. She and I think of JD, who was also at the New Year's Eve tournament, and didn't make it into the state championship, which I'd like to think shows our Charlie Brown-like capacity for empathy more than it does our ability to see the bad in any happy news.

bunny_hugger has a sad discovery, that she's lost a small decorative pill-carrier. She remembers having it at MJS's pole barn the night before, but it's missing now. We give a couple searches, of the hotel room and of all our luggage, plus spots like the places in my car where stuff falls out of pockets. She despairs; if the year takes on the tone of the things you do to start, what does it say that she's just lost a small but useful and liked new belonging? At the end of the day, when we're home and doing the last unpacking, I find it as a curious bulge in her big camera's front pocket. It's supposed to go in the side pocket, which is how it hid for a day. So what does that imply about the year to come?

We get home. And, before long, head out again. One of the things we always mean to get to, and never do, is the Festival of Trees at the Turner-Dodge House. This is a mansion, and one of the older homes in town, built by one of those families that was able to build mansions a century ago and have a mansion that turned into a museum after that. For a while

bunny_hugger thought to have our wedding there, although the catering would be a hassle. Each year they host dozens of Christmas tree, set up by various organizations, and we always think to go there but never quite manage. We managed, this time, our first time actually inside the Turner-Dodge House.

It's a three-storey building. On the first floor were trees from, for example, a photography club: decorations included film negatives curled up into garlands, film slides hung from tree branches, a couple of old disposable Kodaks dangling here and there. Another was made by four women from the state legislature; the tree was decorated with state symbols. Including stuffed elk and moose up top, so that the tree topper imitated the Great Seal of the state. And in the living room or possibly sitting room they had a live musician, playing soft jazz. Beside him, and the audience: a four-foot-tall Santa statue with just enough articulation that it could wobble back and forth while ``singing''. This was turned off for the music; we saw the Santa in full ridiculous behavior later, and met a guy who said he'd brought it. It had been part of one of the local Macy's Christmas decorations and a relative got it when the store closed.

The second storey had, we estimate, 318 bedrooms across the floor, and it had trees decorated with space- and astronaut stuff (including a copy of Arthur C Clarke's 2010: Odyssey Two under the tree), or an Elvis tree, or one from the Capital Area Humane Society. The third floor was mostly a ballroom floor, although with a small children's playroom off on the side. This had a tree topped with a Folkmanis raccoon puppet, built by the Fenner Nature Center and featuring animal figures all over. It also had the most stunning one, promoting an upcoming theater group's show of Into The Woods. This is a tree in the most abstract sense, a cone of white triangular wedges with fairy-tale scenes cut in, lit from below so that the tree looks like a forest full of activity. Near the entrance they had a ballot to vote for favorite of the trees, and I voted for that; the woman there said it was the overwhelming favorite.

We spent only a bit more than an hour there, although it whetted our interest in seeing the Turner-Dodge House properly, with some idea of what the history of the place was and what the rooms were for. And maybe plan to get to the Festival of Trees next year. It's usually the last of the special holiday shows to close up. It made a good close to the area festivities this year.

And with that, we could ... not at all have a lazy night's rest.

Trivia: The 1939 World's Fair Time Capsule includes ten million words on microfilm, and instructions on how to make a microfilm reader, and a small microscope to give the process a chance at starting. Source: Time Travel, James Gleick. 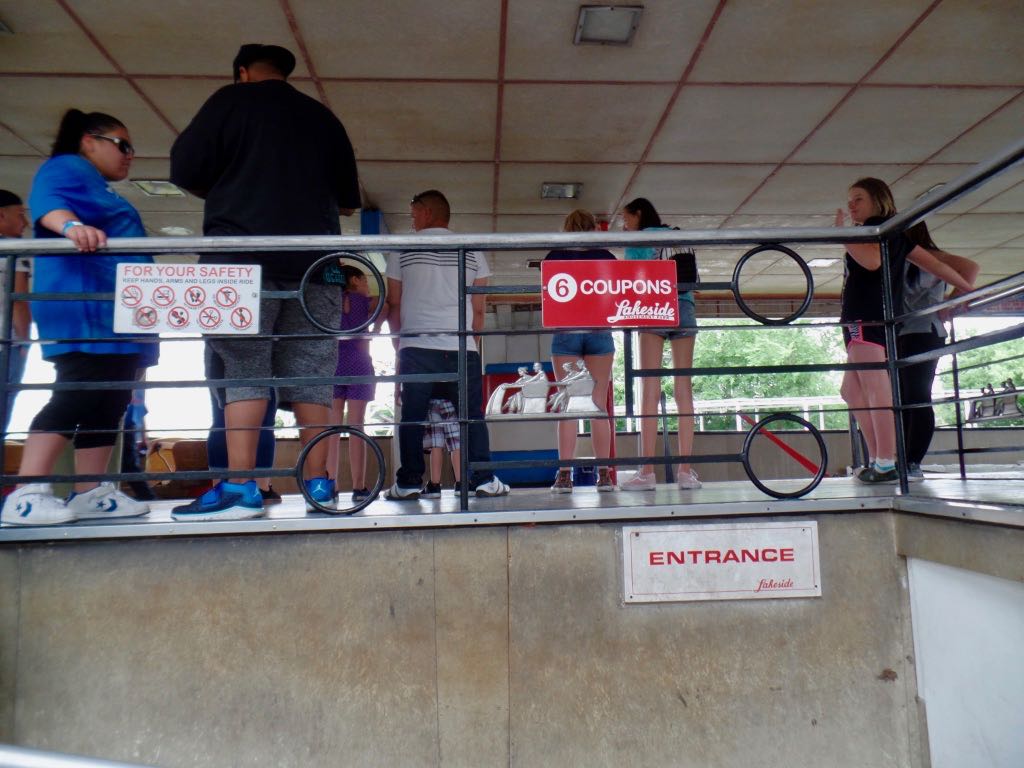 Looking up the entrance queue to Cyclone Roller Coaster. It's a six-coupon ride, and well worth that. 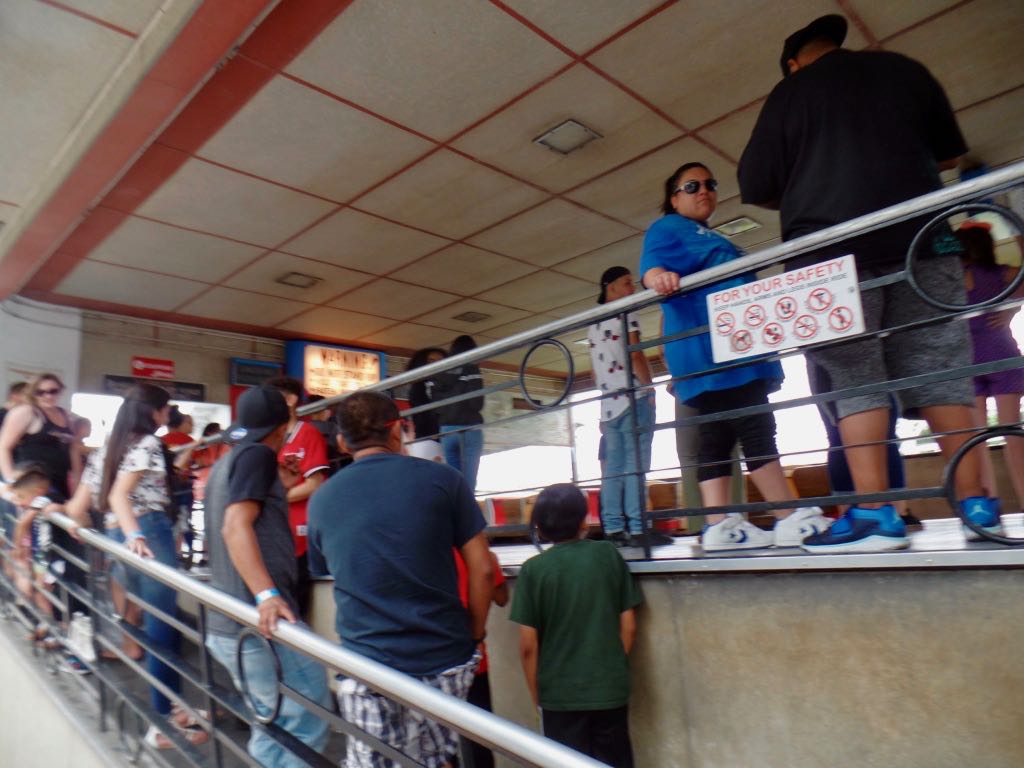 Like many older roller coasters the queue area isn't that long; just a couple of trains' worth of passengers. 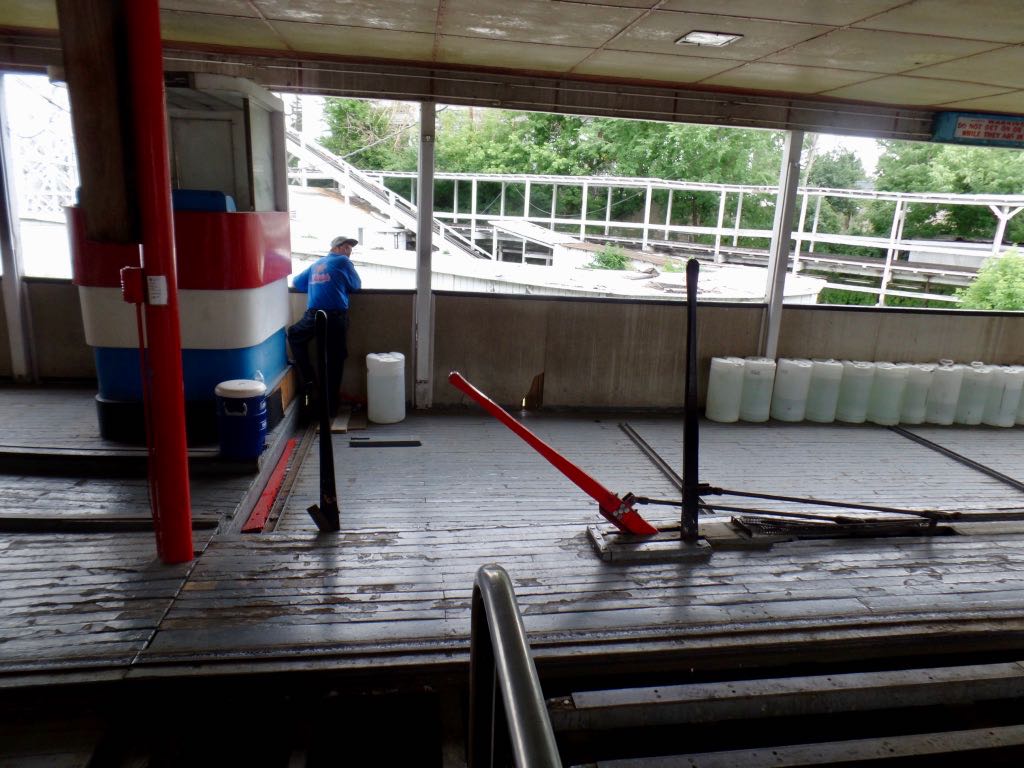 Manual levers, showing the ride still works the old-fashioned way. Also in the distance you can see the S-curve tunnel that's one of the first elements of the roller coaster ride.