From Pennsylvania, folks are travelling down to Dixie's sunny shore

What we had to sleep early for was my parents. We didn't want to go another Christmas season without visiting them, and found that a flight right after New Year's could be affordable and fit

bunny_hugger's work schedule. This forced us to a short flight, since the first day of classes would be the 7th. And she'd have to do class prep while visiting. But we aim for low-key, low-event visits to my parents and we could deal with that. Also, after we'd got our plane tickets, it turned out

bunny_hugger had mis-read the schedule. Classes don't start until the 14th. We could have gone a week later (and not missed the first pinball tournament of the year) or gone for a longer time. We won't make this mistake again: it turns out the cheapest time to fly out is mid-December, and we're thinking seriously about whether we can do that instead next Christmastime.

Our flight went through Charlotte, North Carolina, with several hours of just hanging around waiting for nothing particular. We used this chance to get lunch, to use the time efficiently and to keep my parents from waiting for us to have their own lunch. We got in to Charleston in the early afternoon, and got a nice curbside pickup and returned to my parents' apartment home, somewhere on Daniel Island. They're still decorated for Christmas, naturally; it's only the 2nd of January. They have a wreath hanging on the apartment door and everything. Their cat --- just the one now, twelve years old --- prowls around under their artificial tree and glares at us until

We napped. My parents expected us to do that. It's not quite two hours but it makes all the difference. We're still groggy but now we're functional. We go out to dinner, to a Chinese place that's nearby. My parents are well-known to the staff there, in a way I'm too shy to ever be with a place. Its name is something like Lucky Dragon, and while the place can't be that old, it has that old-fashioned American Chinese Restaurant look to it, dark wood and red walls and under-lit.

bunny_hugger confirms my hypothesis that it looks like Lansing's lost House of Ing restaurant, the one that used to have columns out front climbed by Chinese dragons. They have an eggplant dish that I knew right away

bunny_hugger would want; I have a tofu one myself. We all have enough for leftovers the next day. And, my mother notes, we all mark our take-out boxes differently. My father scratches an X in the case with his fingernail. My mother writes her initial.

bunny_hugger writes all four of her initials. I write my name in tiny block letters; the styrofoam box soaks up ink from my pen perfectly. And we get dessert;

bunny_hugger and I split a fried banana with ice-cream thing that the waiter tells us tastes a bit like cheesecake. It doesn't, but it has got a nice cheesecake texture.

Back home we have a question: exchange Christmas presents now or later? We decide to do it later, maybe some day when we haven't done anything all day. Before we visited my mother had suggested we go to Savanna, Georgia, one day to take in the historical sights. This implies getting up around 7 or 8 am, so that we can make the two-hour drive at a reasonable hour. Now, though, she isn't so keen on the idea. She suggests we might go to the cypress gardens nearby; it's a county park, showing off a cypress swamp, that's only recently reopened. She had gone on a boat tour a few months ago and liked it, although she got seasick and didn't want to go back. The plan sounds good to me, though.

We look for the Christmas music channel. There'd been one last time we visited, that played music through Epiphany. Not so this time. There's a channel claiming to play Christmas music, and that has Christmas imagery for its background pictures. But it's a slightly baffling mix of contemporary music that's playing. There's some nice absurdity to pictures of Santa Claus dolls while Notorious B.I.G. plays, but we only take so much of that. We end up going to bed early, certainly by our standards. Only a little late by my father's. My mother goes to bed her usual hour around 9:30 or so.

Trivia: Spain demanded a promise of help recovering Gibraltar and Minorca before joining the American and French war with the United Kingdom in 1779. Source: The First Salute: A View of the American Revolution, Barbara W Tuchman. 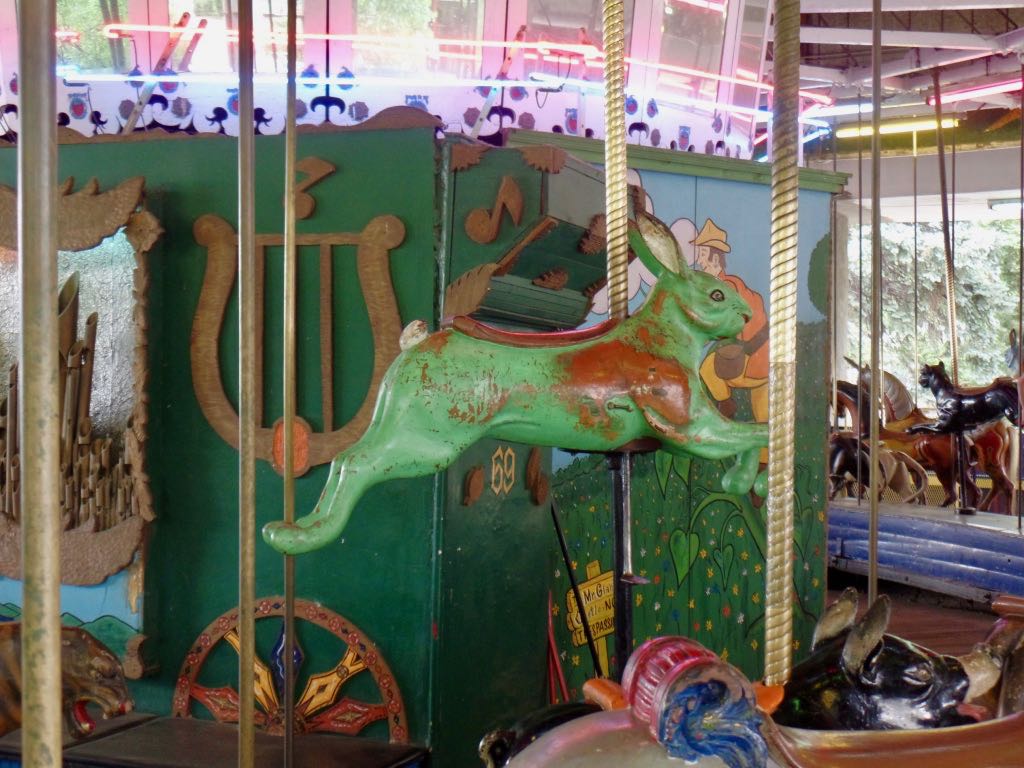 A closer view of the green-painted rabbit, with the paint worn off to show a more realistic brown underneath. Or possibly a faded red. 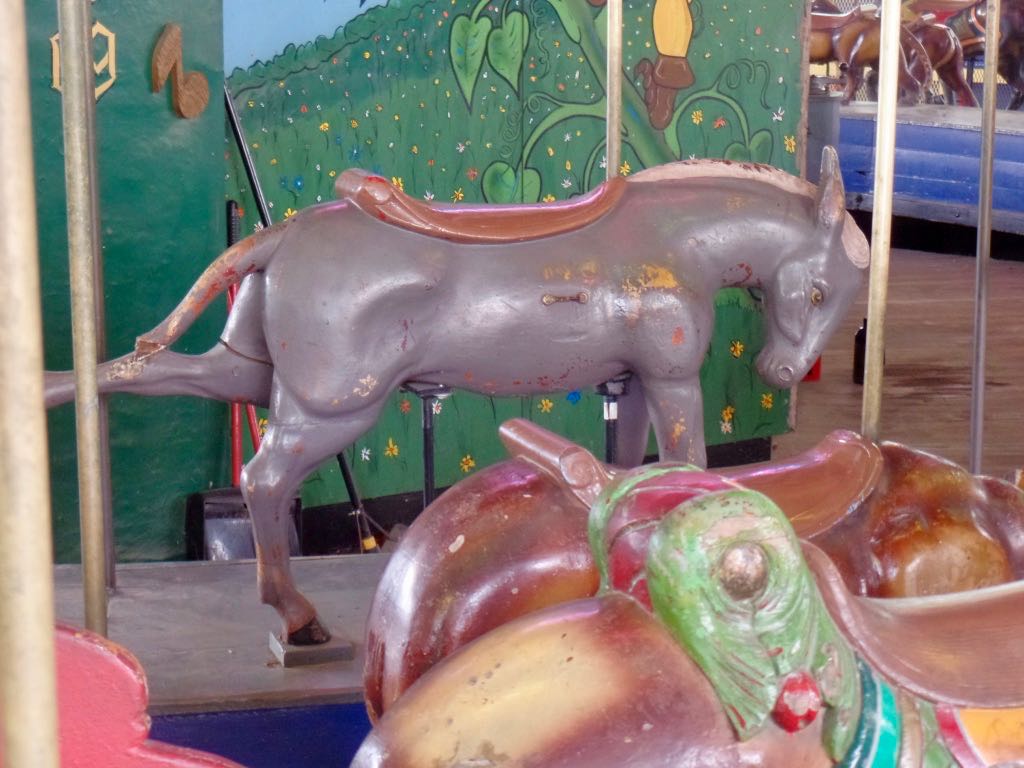 And here's a donkey. There's a little metal handle on the side and I'm not sure if that's where stirrups for the saddle once went. 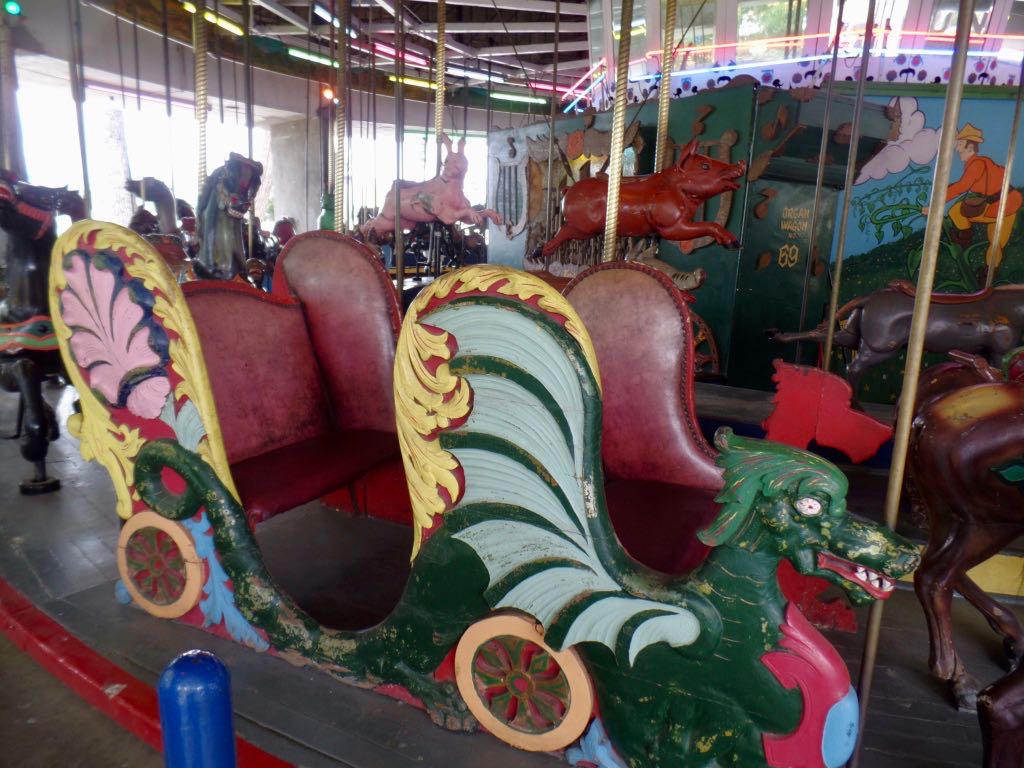 The dragon chariot for the ride, beaten down by age but still well worth attention. There's a lot of dragon chariots out there and I wonder what set that as a standard.