I ain't got them big ol' city blues

After the boat tour, through the deep dark water --- tannins from the cypress needles that fall in winter --- we thanked the guide and walked around some. There's a bunch of other exhibits. A couple of parrot-class birds in a large cage. There's also a butterfly house, with many flowers and several bunches of birds inside. We ventured in and almost right away saw the plants of, and sign for, ``Mexican Heather'', which we hadn't heard of before. The sign warns, it's ``in now way related to heathers'', so there we go. It was a lovely peaceful spot, and as we went out we saw a bright yellow butterfly going past. I'm confident that it was not one from the enclosure; there just weren't any bright yellow butterflies inside. Still, weird coincidence.

There's also a small building with local animals, some of them fish, some snakes and reptiles and all that. Outside it there's a captive alligator, alleged to be the largest in captivity in the state. It was just hanging out at the side of the water, getting photographed by people who were fenced off from being all that nearby.

Then we went along one of the hiking trails.

bunny_hugger had noticed on the map that there was a graveyard deep within the forests and we hadn't passed it on the boat tour. So we walked there and found, yes, a small graveyard marked off by a two-foot-high stone enclosure, with a free-standing cross maybe fifteen feet tall. There were three main gravestones, with dates reaching after the gardens were donated to Charleston, so there must have been some arrangement. Also there was a small gravestone, ``My Happy'', for something sixteen years old at the time of its 1957 death. My supposition is dog, possibly cat. And we walked back, pausing to photograph the small fake stone bridge made for filming The Patriot and kept around since, hey, free fake stone bridge.

And that was our big outing for the day. We went back to my parents' home; my mother had made macaroni and cheese and we had dinner. At home

bunny_hugger and I always eat at the dinner table, an innovation I introduced because we did it that way when I was visiting her, before we married. My parents? ... Well, as is the custom in my family, the dining table was so covered in clutter that there was no eating off of it. I wouldn't fault

bunny_hugger if she didn't know there was one. We just took plates to hang around the living room area.

A bit after dinner, while waiting for Jeopardy, one of my parents' friends visited. He's an author and his wife had a surplus minced meat pie and they just live in circumstances where people bring over surplus minced meat pies like that. Also like 75% of everybody they've met since moving to South Carolina, he's from New Jersey. He shared a couple quick stories about the Freehold Raceway, which I never went to because I couldn't be less interested in such, but also talked a bit about the fixing of harness races there. Which does interest me, peculiarly enough.

After all this, I go fishing around the TV channels and find they're playing a series of Planet of the Apes films on Turner Classic Movies. So we settle on that, the first time I've seen the movie in a long while. Longer, for

bunny_hugger. We're both impressed by just how talky and low-action the movie is. You forget the screenplay was co-written by Rod Serling and when you learn that, you understand why so much of it is people declaiming angrily at each other. Then on to Beneath the Planet of the Apes, which

bunny_hugger doesn't remember seeing at all. So when the movie gets back from being kind of boring by introducing telepathic mutants with a doomsday bomb in Saint Patrick's Cathedral? That's a surprise to her. She also was impressed by how the movie was just killing off everybody right before its end, just in time for the abrupt end of the picture.

She wanted to know how there were like eighteen sequels to the movie given how the second one ended, but it was also getting past midnight and she was far too exhausted for all this. So she just looked it up online and went to bed. I would make it through the movie, although losing focus, before I fell asleep.

Trivia: The enzyme which binds carbon dioxide into carbohydrates, as part of photosynthesis, is named Rubisco. Source: Oxygen: The Molecule that Made the World, Nick Lane.

PS: More things to look at in Lakeside Park. 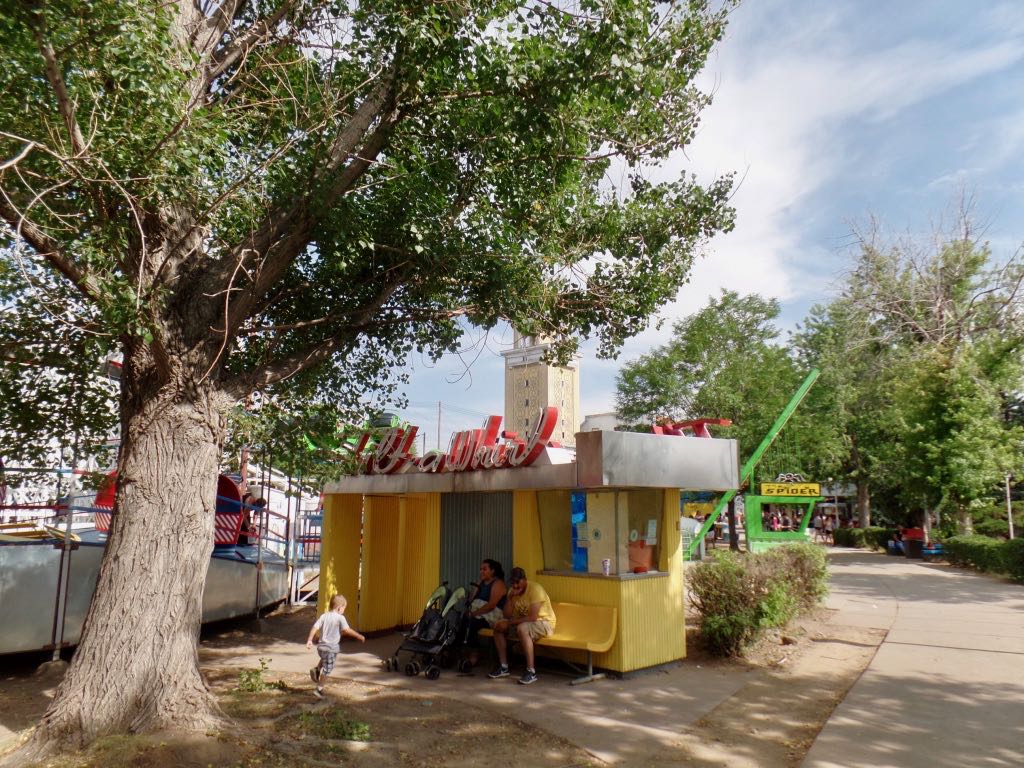 I would legitimately try pushing a cocktail book that's just pictures of the ticket booths for Lakeside Amusement Park. Notice the Tower of Jewels in the background. 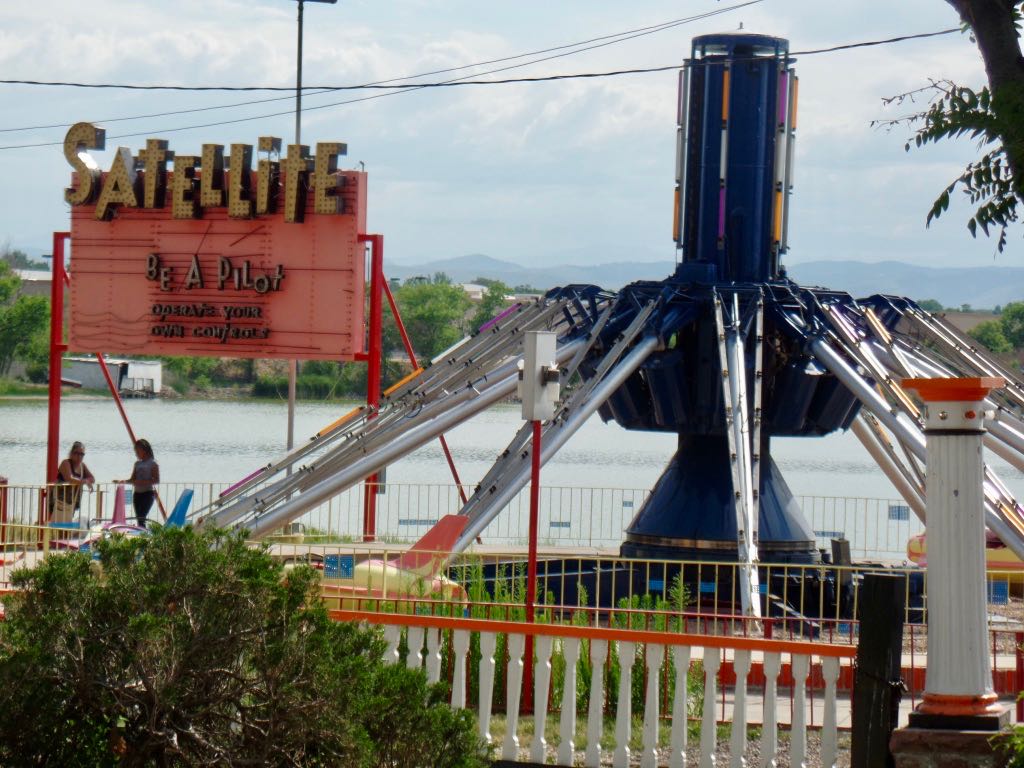 Satellite --- be a pilot!. It's one of the rides that's across the railroad tracks and near the edge of the water; you have to get to it by going over that silly little steps. Notice the column supporting nothing on the right there. 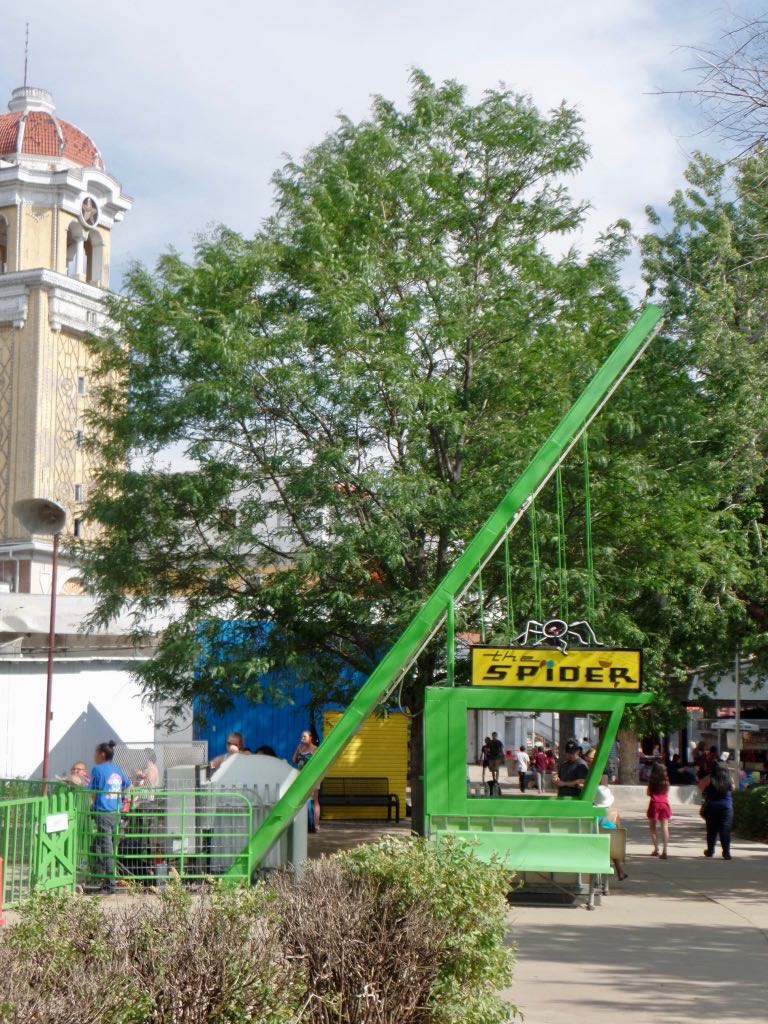 Even in the full light of day, without the neon being on, the Spider's ticket booth looks fantastic.