So what did we do Saturday, visiting my parents? ... Really, not a whole lot. Slept in, since we were still kind of knocked out from our travel. We had bagels for lunch after my mother remembered she had some frozen, picked up from Wegman's when she visited my brother in Maryland recently. The bagels are just better the closer you get to New York City, what can I say? ... Also, they thawed surprisingly fast, which is probably going to change our policy about when we realize we forgot to take bagels out of our own freezer.

And after that? Really, we just puttered around the house all day. My mother did go out to the supermarket at some point, we thought to just get a couple of things she'd needed for dinner (empanadas, again her cooking and a reminder to me and

bunny_hugger that we could probably do a little more cooking on our own). This turned out to be more enough that my father needed to go out with the little carrying cart, of a kind that

bunny_hugger could really use for work herself. My mother said she got it at The Container Store, which I think I've heard of being somewhere. Also she got a bunch of those weird new-flavored Diet Cokes, the ones in the weirdly skinny and tall cans. She had already gotten a bunch before we arrived, and then went and got another bunch of flavors. I'm hoping that my parents like what's left over.

We did have minced meat pie for dessert.

bunny_hugger had never had it before, which she acknowledged seemed out of character for her eager participation in Christmas things. But minced meat is by far the least popular of the holiday pies; when we were kids my mother and I were the only takers. My father tried to pitch it to her as being like pecan pie, which does make me wonder what my father thinks pecan pie tastes like. I can't say that

bunny_hugger felt she had finally had the pie she didn't know she needed in her life. We did find, and finish off, the ice cream that's been lingering in their freezer for a long while, and shared the news of the weird habit her father has of microwaving ice cream. (Me, I'm wondering how minced meat pie would go with the right slice of cheese.)

After dinner and the game shows my mother went to bed.

bunny_hugger and I had thought we'd use the quietest day to exchange Christmas presents, and that didn't happen. Also not happening: my father and I going to the Verizon store to figure out our phone problem. For some reason our phones refuse to acknowledge one another, and when I asked my local store why it happened they had no idea and suggested we both go to a store together. This was our first chance since the problem crept up, like a year and a half ago, and we never got around to doing anything about it.

Somehow I was left in charge of the tv remote again, and found where Svengoolie was playing on MeTV. Also my father insisted there must be an HD version of the channel, which I couldn't find. We talked about how our house, somehow, can't pick up broadcast TV even though it's at the centroid of all the TV antennas of the Lansing tv market. The movie was It Came From Outer Space, which like most intelligent science fiction movies of the 50s is about aliens being all snooty about how humans are suspicious and uncomprehending peoples, just because the aliens go lurking about acting suspiciously and refusing to explain their needs and plans. Also it turns out it was written by Ray Bradbury, which explains why all the people aware that they are facing a transcendent moment, in their lives if not the lives of all humanity, are being all cranky about the bother.

My father went to bed about when this wrapped up.

bunny_hugger and I stayed for Star Trek and then an episode of Buck Rogers where Buck contracts a case of Space Werewolfism. It was honestly a pretty decent episode, spoiled only by their trying to give a scientific explanation for why men on the Planet of the Week turn into werewolves.

If this sounds like a slow day, that's fine. It was deeply relaxing. 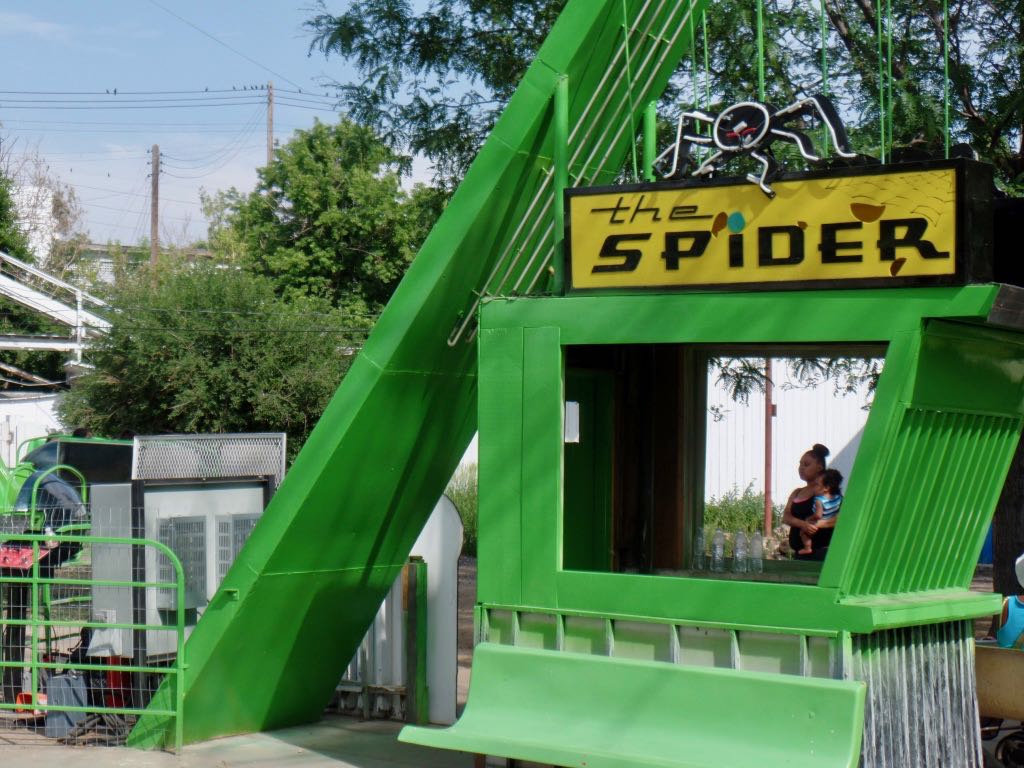 The Spider's booth looks great up close too. 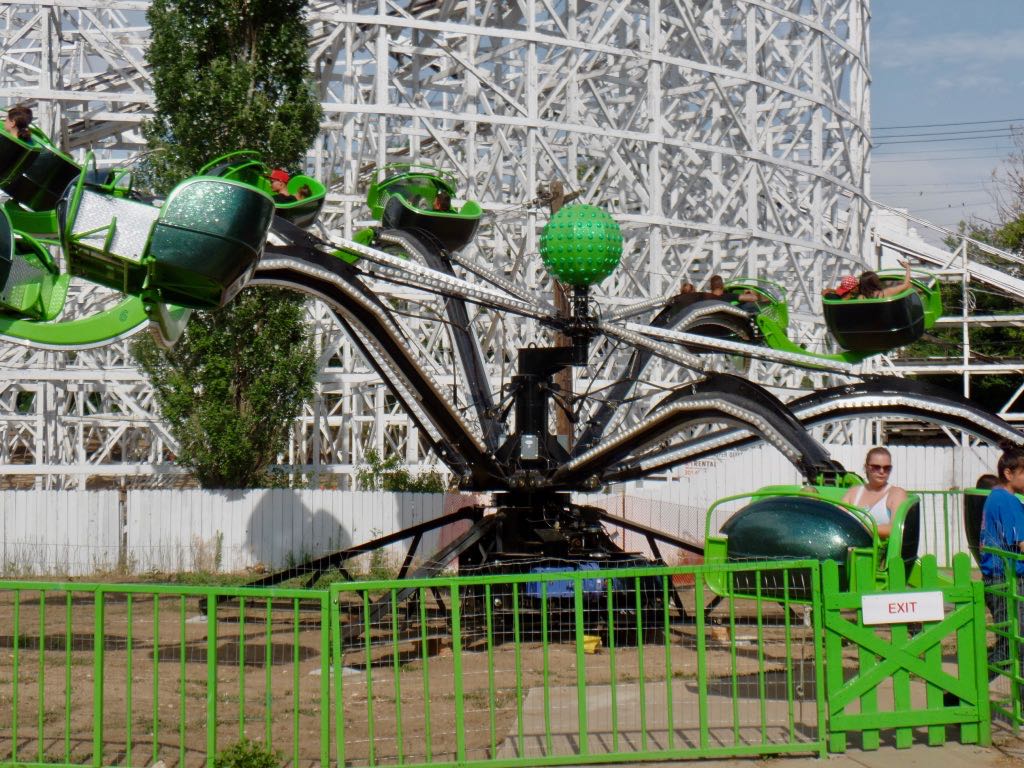 And here's their Spider ride. This is actually a new mechanism, replacing one that was decades old, and I legitimately wonder if they replaced the ride with another of the same model just so they wouldn't lose the booth out front. 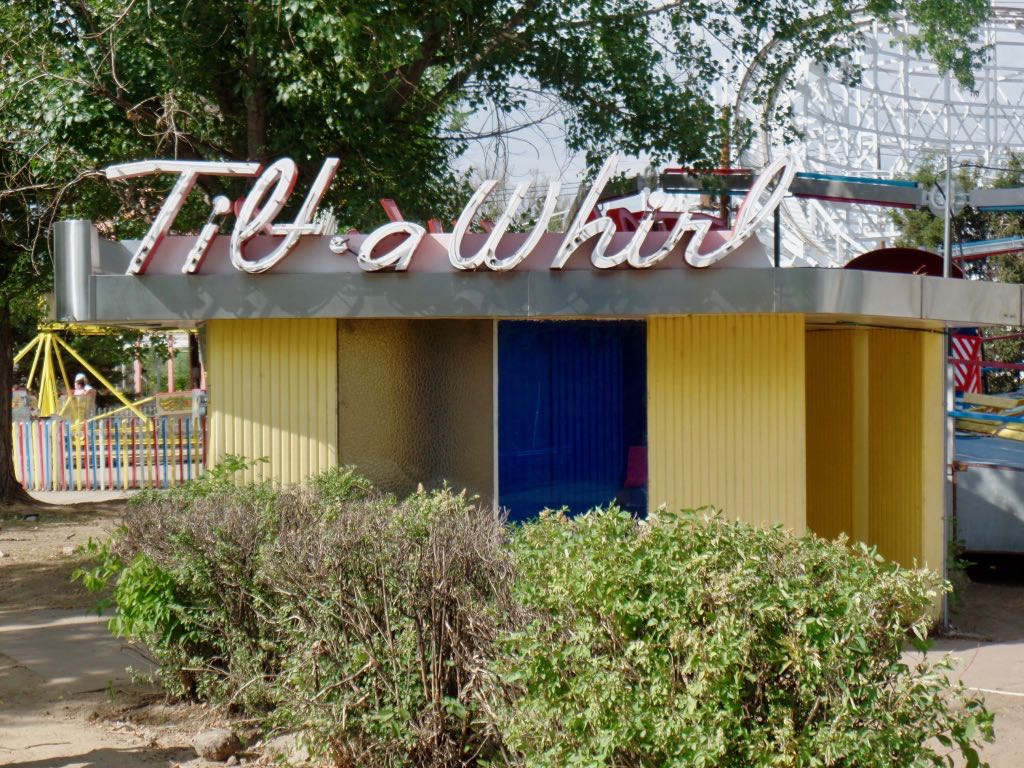 Here's some attention for the Tilt-A-Whirl's booth, which seems like a whole tiny building and not just a way to get to the ride.