Where are all the people going? Round and round till we reach the end

My first day back in the office in years --- literally since Stephen was dying --- started late. I thought I had set the alarm clock and, as best I can figure out, my checking that it was set caused it to un-set. I still woke about 7:30, enough to get in only a little late. Also, nobody cared, since none of the people I was there to see were there anyway. I would try not to take advantage of, oh yeah, it not really mattering just when I got in. But one other morning I did sleep in, when I really needed it. I'm amazed how much better I am getting up for 9 am than for 8 am.

The first day back, as often happens, ended up including a whole morning of catching up with people I hadn't seen and learning how many people had surprisingly gone since I was last in. And waiting for my computer to be set up with a desk and monitor so I could do anything. This took a very long time since I hit one of the busiest days for the tech folks, and it brought back memories of the eight months I worked three days a week there without any responsibilities whatsoever. I did get to talk some with one of the guys working on the project I was supposed to start on, and got briefed enough to have a clear idea of what exactly I was out there for, though. Also at lunch I discovered the deli I always went to has closed, replaced with a little cafe that I didn't think I could just get, like, pork roll at. I went to the other deli counter, in the convenience store across the street, and they apologized; they couldn't make hoagies because they were out of bread. So after this I started bringing in a tray of hummus and chips for lunch and skipped looking for local food.

Friday ended up being the big day, with first me going to the SQL server guy. My intent was to ask him to just get server address and password and any one preloaded query so that I could prove out connecting my stuff to his SQL server. The SQL server guy is this guy you don't actually talk to. You stand within his perception range, and then he starts talking, and showing off whatever the heck it is he's doing, and eventually the day ends. It was, without exaggeration, a half-hour of him showing off stuff he'd worked on before I could even say what it was I was there for, and while he was thrilled beyond all reason to provide this I'm still not sure I actually have what I need. I would have liked to go right back and do a test build, but the boss came in and we finally had everybody who'd have some say in this project. So we started a meeting about that, and that meeting went on the rest of the day.

The major disagreement and the one I couldn't find a way to excuse myself from was about the core design. It's a system about letting people in the field enter data. The boss would like to have this all done as a web application so that people with cellular-data-equipped tablets can send us data updates in real time. The tech people say that clients are not going to pay for cell-data-tablets because they are just as happy to have their records updated in a batch at the end of the day and save on the data plan charges. I think the tech people are right about this; but, the boss wants a web application. I'm content to build this, since the stuff I'm least confident I know how to do will be the same either way. Also, they gave me a tablet of the kind that people in the field are using, so that I can build something which looks as much as possible like the data-entry program they're currently using.

In other officing games, though, I was finally able to explain to my boss, enough times, that he started to believe me that Google Maps would not work with OpenLayers anymore. And we even found a workaround. We were using Google Maps to provide aerial photographs of some stuff. It turns out the state of New Jersey has published its own aerial photographs, for 2017, 2015, 2013, and miscellaneous other years going back to 1930 (!). (Pick a year and a map of interest, and then Open In Map Viewer if you want to see, like, what Jamesburg looked like back when. Many of the older maps, besides 1930, are only of regions of the state.) And set things up where anybody, such as us, could put them into our projects. We can also download and host complete copies of the flyover photographs ourselves, which would be the better long-term solution. But even without that, it meant that I could excise the Google Maps stuff easily and replace it ... wait ... uh ...

So, the last couple days of my office work turned into yak-shaving. I've been having issues. Geoserver, which makes maps, on the development and testing server for some reason introduces this great big white block that obliterates the map. Using the developer tools and inspect-elements feature you can remove the white block and see the map, but I can't figure out why it's there at all. All right: the backup is to develop and test in a secret directory on the production server, whose Geoserver doesn't do this. And then Visual Studio decided it would not post to the production server, citing some files not being findable in something called SGEN. As far as I can figure this is Visual Studio throwing a fit, rather than a real thing. But also every fix I could find for this doesn't work. Nor could I post to anything but the original folder in the development server; even other folders on the development server don't work. But I can copy the files from the working development server folder to other folders, including on the production server. Why? I have not the faintest idea. This is too stupid a workaround to live with, though, but it'll at least deal with things a little bit. Also something about the projection is wrong but there is no understanding map projections.

And on Monday there was something wild. Someone broke in to one of the cars in the parking lot. He did it kind of the old-fashioned way, trying each door handle. He got in to one that has those button handles; somehow he hit enough buttons to get the door to unlock. Then he rooted around a good five minutes or so, before finally making off with ... I'm not sure. But he did leave the brand-new laptop in the car. This all happened about 11:30 that day, and it was only discovered hours later. They were looking over the security camera footage and marvelling at it. Also that, like, a couple minutes either way and someone from the company would have been outside, for a smoke break (there's a surprising number of smokers here) or to get lunch or to use one of the work vans. So that made for some excitement at the close of the day.

Tuesday after I came in and asked if there were a repeat performance I noticed what looked like a crumped $50 bill on the floor. I said someone must be feeling flush with cash if they're throwing fifties around. The guy whose car was broken into agreed yeah, it's just there for anyone. What it was, was a color copy of a $50 on a regular sheet of paper, tossed down as the tamest sort of practical joke. This got some talk going about how weirdly good a copy it was, at least seen from six feet away. One of the people who've been hired since I was regularly in office took a $50 out of his wallet, and compared: the color wasn't right, and the bill was a bit small, and of course the paper was nothing and --- excuse me, why do you have multiple $50 bills in your wallet? He explained that he doesn't have a bank account(?) so he has to carry cash(?). I suppose it's his business if he wants to not have a bank account despite having, you know, a salaried job. What I, and suddenly everyone else, wanted to know was where does he even get fifties? And hundreds? And we couldn't get this question answered. In the thirty years I have had a bank card I have seen one (1) ATM that dispensed fifties, and none (0) that dispense hundreds. Twenties and I suppose theoretically tens exist. Where do these people who walk around with fifties and hundreds get this stuff?

And this is how I was spending my work days, while in the Garden State.

PS: So now let's look at the younger section of Lakeside Amusement Park. 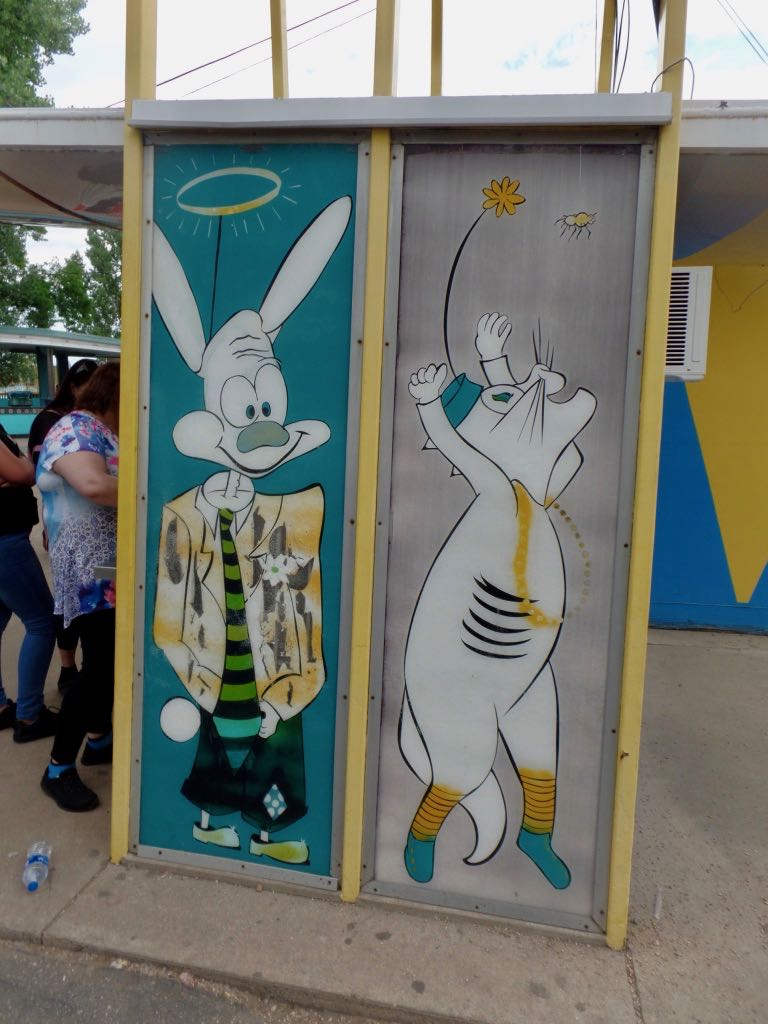 Cartoon illustrations of a rabbit and Jennyanydots at Lakeside's Kiddieland ticket booth. 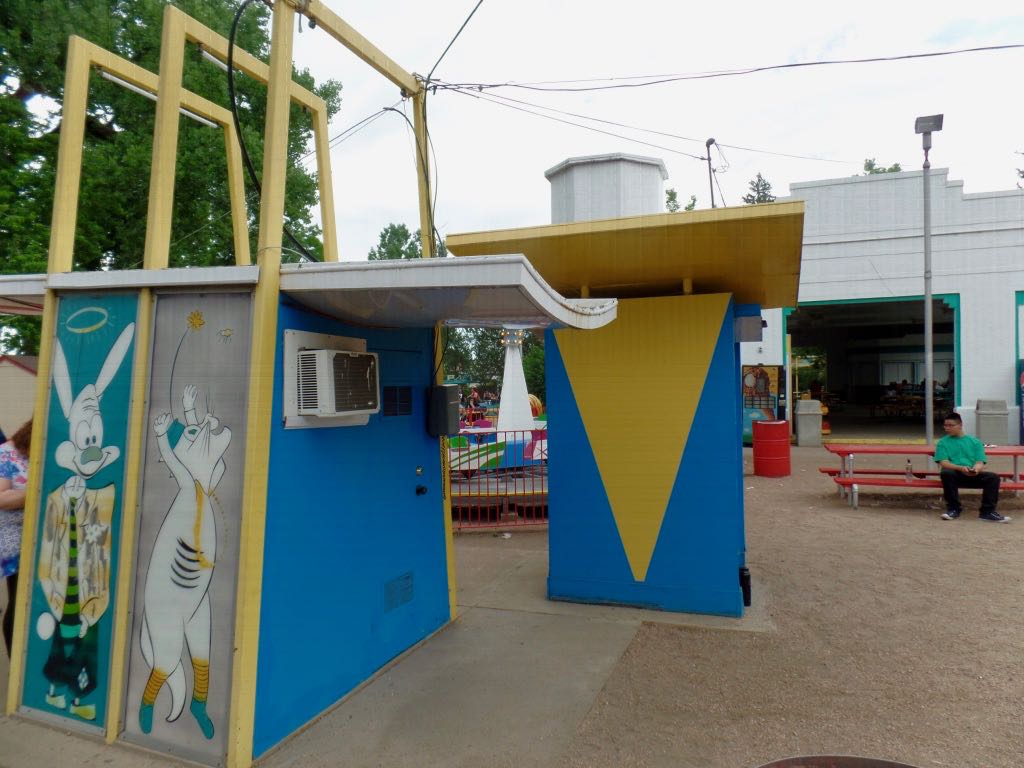 And more of the Kiddieland ticket booth, showing that even that has some neat, weird style to it. 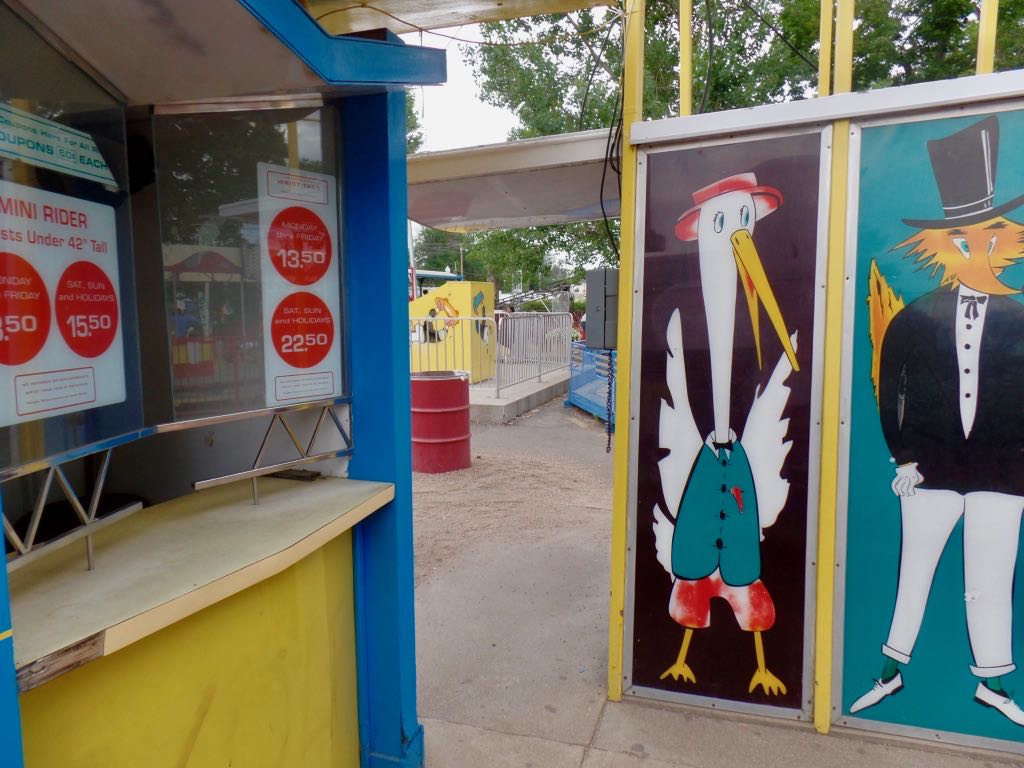 Stork and fox cartoons on the other side of the Kiddieland ticket booth. Also: the actual booth itself, with prices and whatnot.