Welcome to the camp; I guess you all know why you're here

The reason here, though? The Michigan State Pinball Championship. I was set to go in as 13th seed --- no, 12th seed; MJV, to his regret, had to pull out. He's had back pains, which are just awful.

bunny_hugger had been going in as 23rd seed, following her eleventh-hour New Year's Eve performance, and now she'd be 22nd seed. The venue returned to the East half of the state (well, the lower peninsula; the upper peninsula has no pinball scene, and it's really only the lower half of the lower peninsula), for the first time since 2016. The venue this year: AND's house, the basement and garage from which Frostyfest has been held several times. He's got dozens of games, from the 60s to modern games, and mostly quite interesting ones. And he's hosted tournaments, including the Frostyfest that's usually the last big tournament of the year. And, yeah, if the west side got to host the finals one more year there'd be open rioting.

AND's house is near Flint; it's not even an hour away, and most of that on I-69. Compared to the Fremont location of last year this is practically our backyard. And yet weather conspired to make it difficult again. After a winter that's been mostly snow-free and disturbingly warm, we had a winter storm advisory. Not just a modest one either, but the promise of anywhere from four to eight inches. The International Flipper Pinball Association does not allow for snow days, and only allows for delays at all in case of catastrophic failures at the venue. I understand their being intersted in having all (United) states and Canadian provinces hold finals as simultaneously as possible. But I also feel they should defer to the weather service issuing travel advisories. And understand that, like, for people in huge states like Texas or California ``just come next week'' might not be practical. But how the weather might screw up attendance was an important question.

So, we decided to get a hotel room near AND's house. Unfortunately his house is off the main roads, and even off the minor roads; he lives at an intersection that's paved on one side and gravel on the other. I wasn't worried that I-69 would not be in tolerable condition Saturday morning. The county roads, though?

Besides that, we had Sunshine and Fezziwig to take care of. Fezziwig's easy; he has his caches of food and water bottle and wheel to run on. Sunshine? We once again called on

bunny_hugger's grad school friend EJL. He was willing to come over in the morning and give her a full day's ration of pellets and vegetables and hay (the extra pellets in case we were snowbound near Flint). And gave him a house key, which he should really have had before, as the nearest trustworthy person who might take care of minor house emergencies when we're out of town. When Saturday morning and four inches of snow came, he regretted his willingness to help and hoped that we'd have e-mailed him to say that we had decided not to go, or had stayed home overnight, or something. He'd had to park at the top of the unplowed street and trudge down the sidewalk to give our rabbit her food. We really owe him.

bunny_hugger found a Baymont Inn, usually a nice reliable sort of place. Next to the front entrance was a disused industrial-grade washing machine, prompting me to say, ``Hey, free autoclave!''. At the check-in desk was a letter, mounted in one of those frames corporations use to put up notices expected to be there for a while, explaining that while they are near Flint they do not use Flint River Water and besides they're not in the City of Flint and have excellent schools and all. Okay. They were having some problem with one of the credit card readers and had to move us to another station to finish checking in. The guy behind us, paying his hotel bill with $100 bills that he somehow had, was fine. Also, not sure what's sketchier, paying for a hotel room in cash or paying for it with hundred-dollar bills. We had a second-floor room, but the elevator was right next to the lobby and we found ... the button for the second floor doesn't work. We started to look for the stairs, when the desk clerk told us that yeah, the elevator's been doing that and they have someone coming but it'll be a couple days because this is the busy season for elevator repair(?). But if we pressed the third floor button, and once the elevator was in motion pressed the second floor button, it would stop on the second floor. This was a dirty lie, and we took the stairs down from there. We didn't tell them their instructions didn't work, though, so as far as they know the instructions do. Also, the tag by our door, with the room number, was covered up with stickers replacing whatever was there with the 207 it was supposed to be. They also had said they didn't have any password for their Wi-Fi, you just agreed to their terms of service, which did not come up when I opened my laptop. It just connected and showed a blank screen for that Wi-Fi Connection thing.

As delightfully sketchy as all this was, though, the actual room, the part of the hotel we should care about, was clean, warm, quiet, and had plenty of pillows. So, you know, everything to care about was in good shape. The only thing I'd have liked is for the morning breakfast to have extended to 11 am.

Trivia: Darling of the Day, which opened at the George Abbot theatre on 27 January 1968 and closed after 31 performances, was at its time the costliest Broadway failure. It lost $750,000 on the initial investment of $500,000. Source: Not Since Carrie: 40 Years Of Broadway Musical Flops, Ken Mandelbaum.

PS: Getting from Lakeside Amusement Park's Kiddieland to one of its really prominent features. 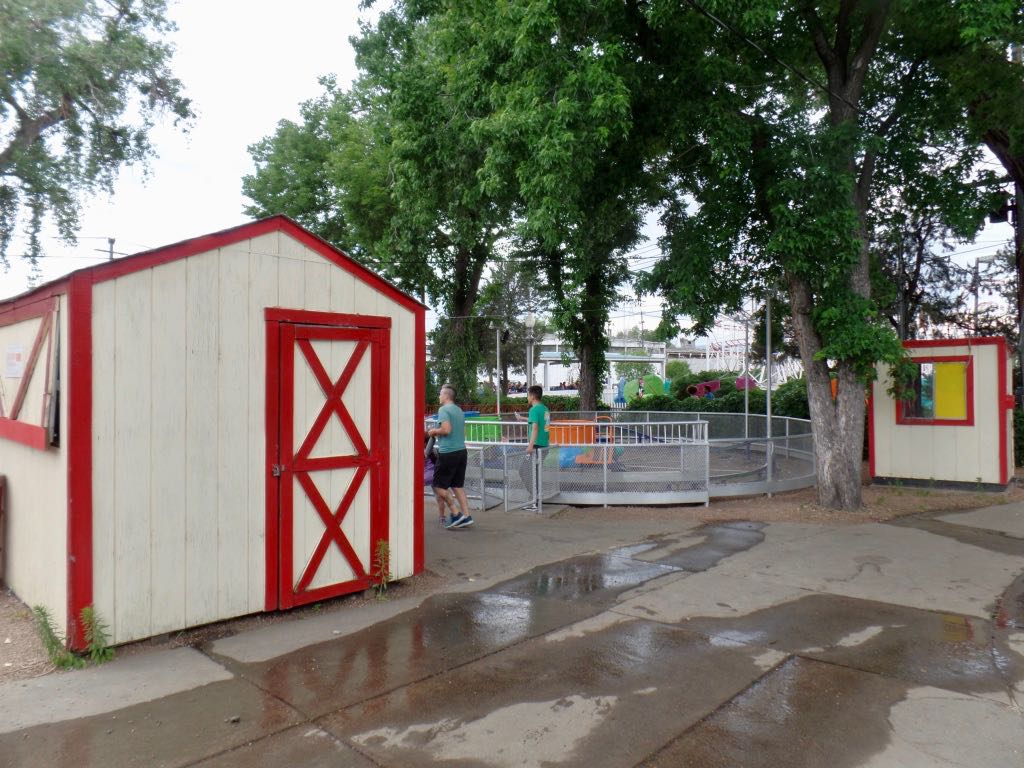 A Kiddieland ... snack stand, I think, though it wasn't in use and a flat ride behind that which I think is a junior tumble bug; I'm surprised I don't have a closer-up picture of it. 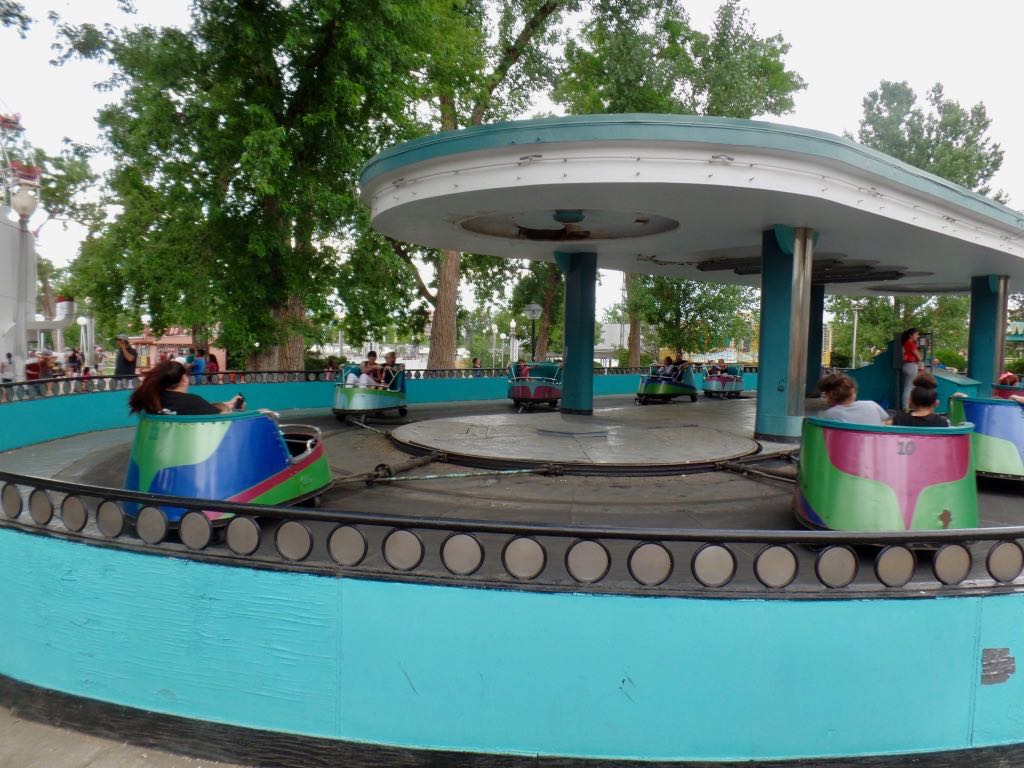 And here's a look at the park's Whip, featuring a nice overhang and an outer ring with many (barely) translucent circles between two bars. 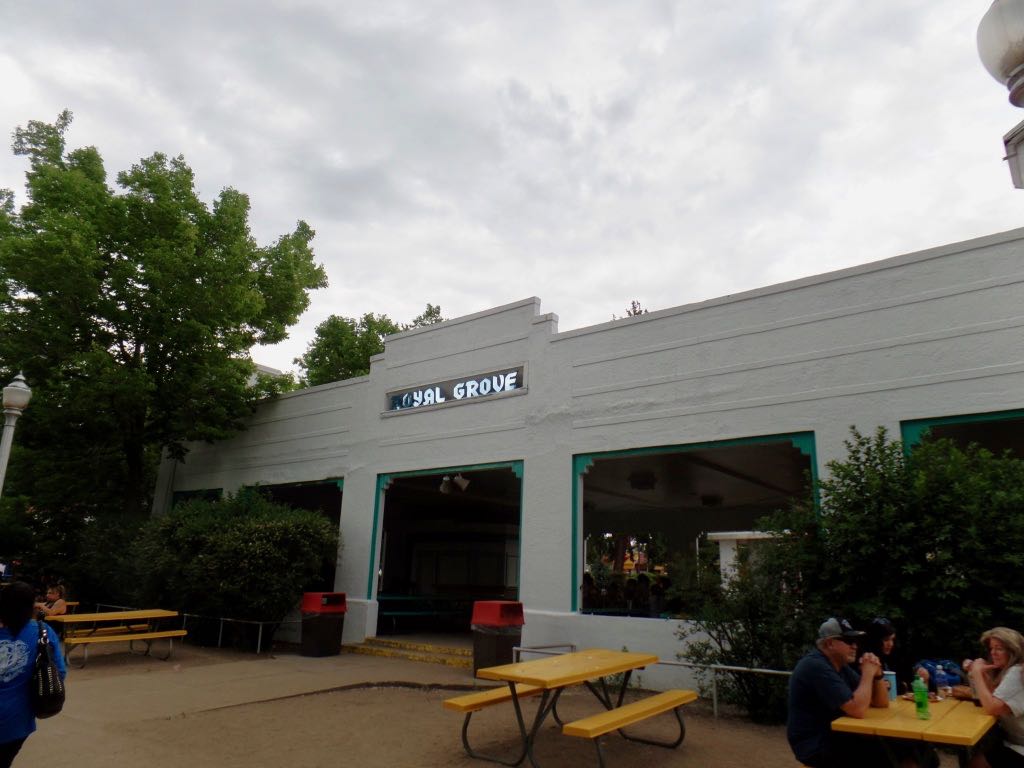 The Royal Grove is, I believe, an arcade set next to the Kiddieland area, although it sure does look like there should be food in there, doesn't it?