And here's another round of pictures from Lakeside Amusement Park, particularly, the kiddieland area. There's also pictures of the roller coaster we did not ride: what was that one, and why? Read on ... 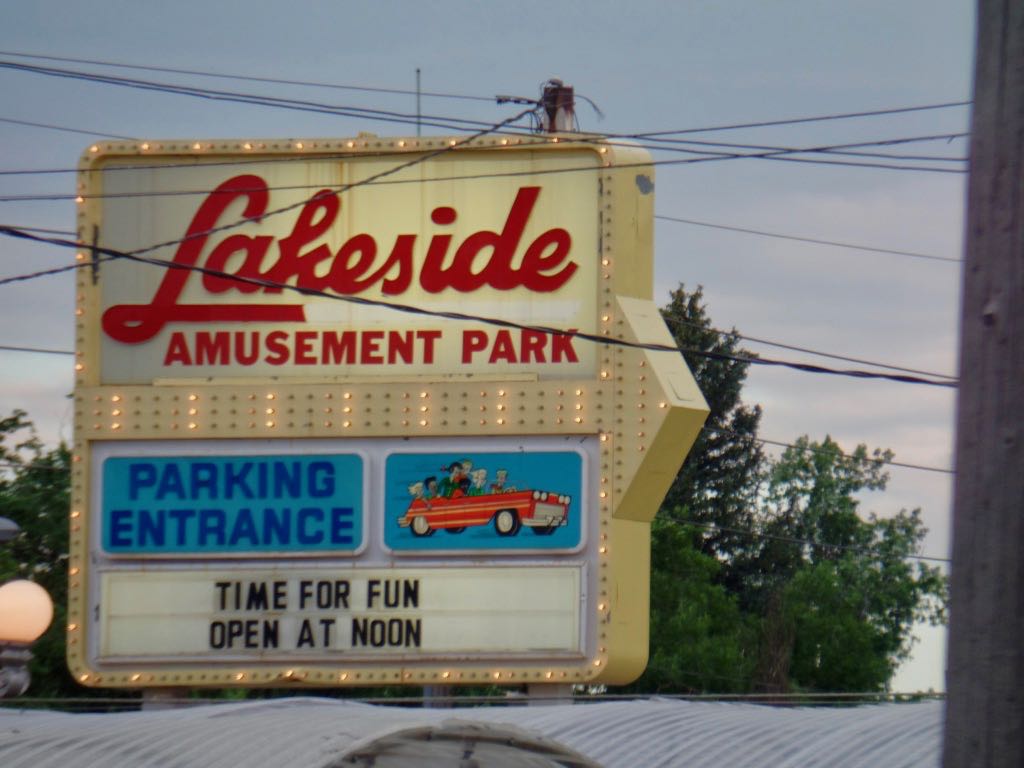 Evening setting in so here's a look at the parking entrance sign to Lakeside park. Time for fun! 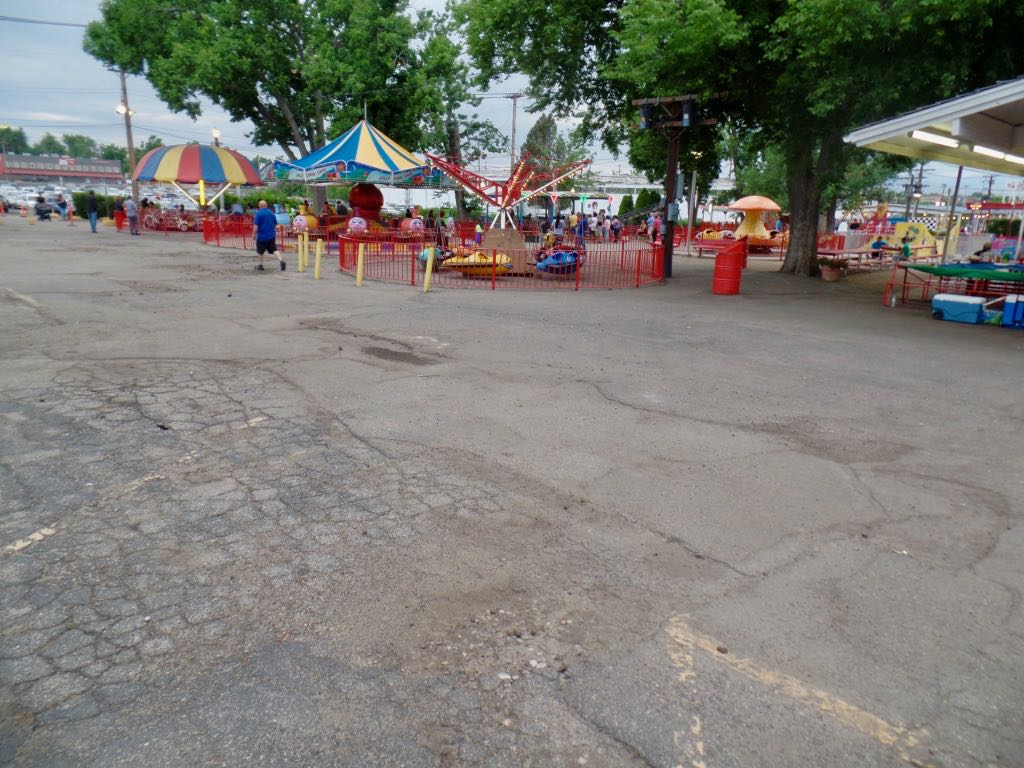 View of some of the kiddieland rides at the parking entrance to Lakeside. 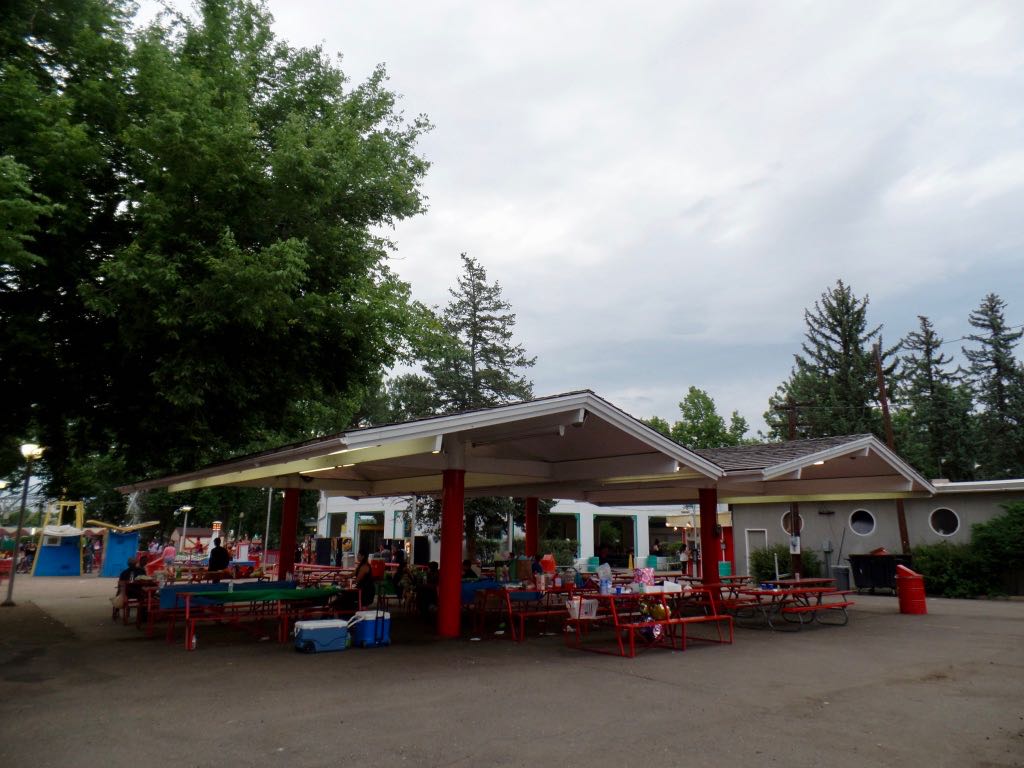 And the kiddieland picnic pavilions for Lakeside, too. Coolers are welcome, you can see. 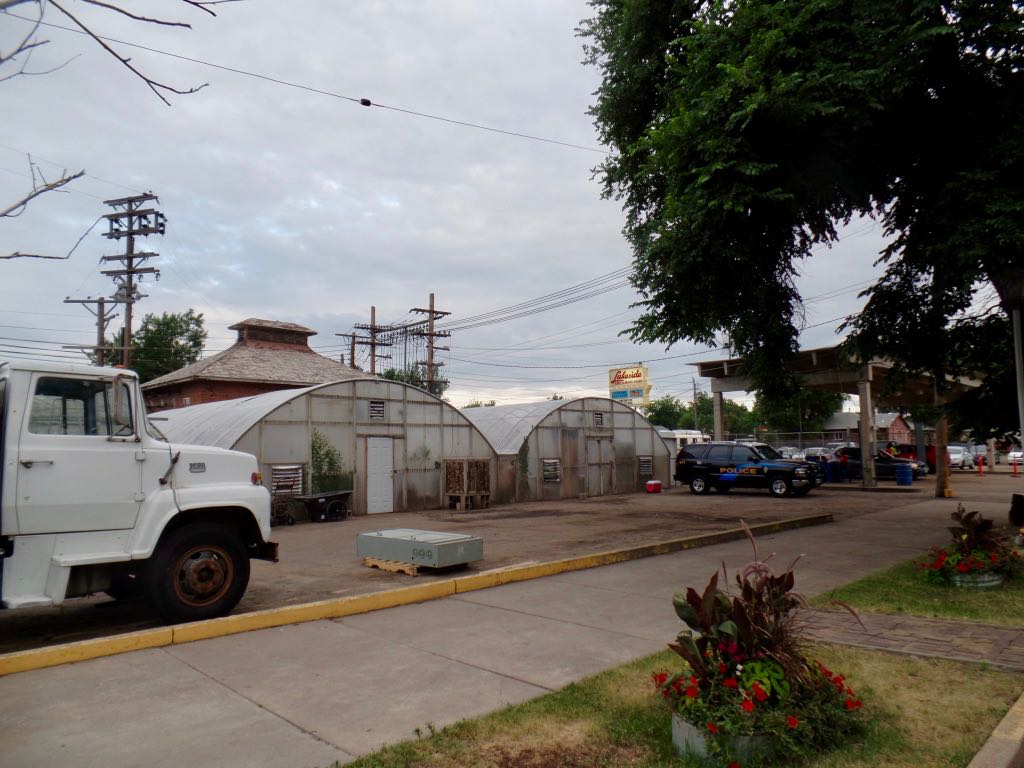 Just past the Kiddieland we get a glimpse of some working parts of the park. 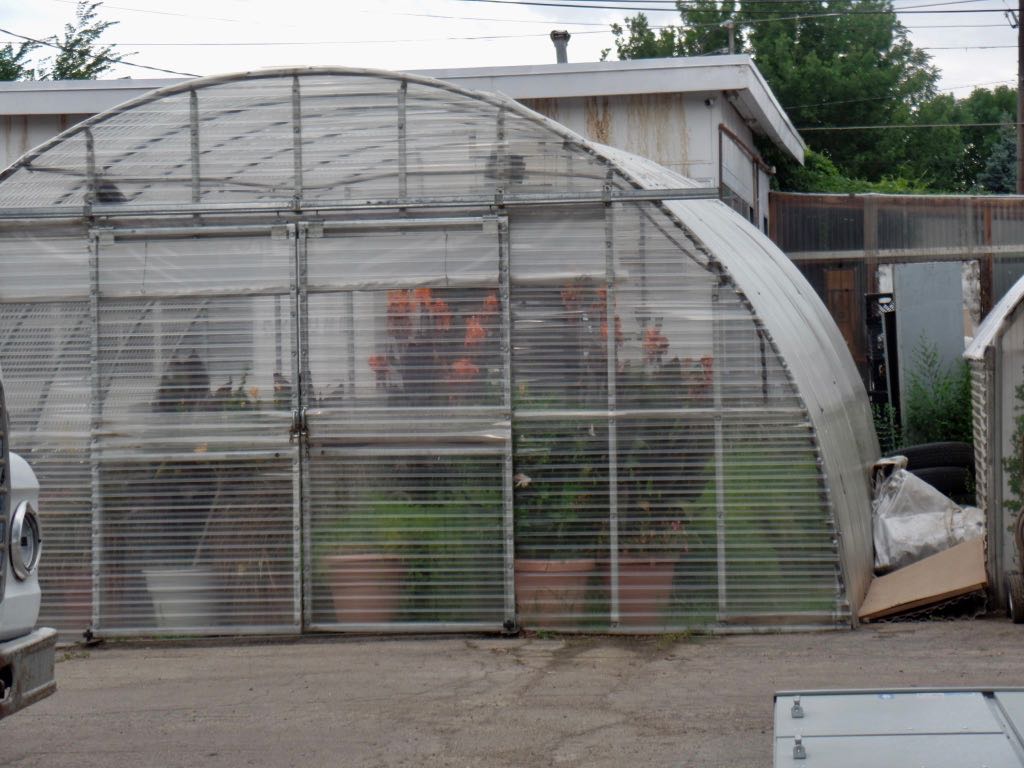 They're greenhouses where plants for the park --- which, for all that its buildings are dilapidated, is well-planted --- are kept or grown. 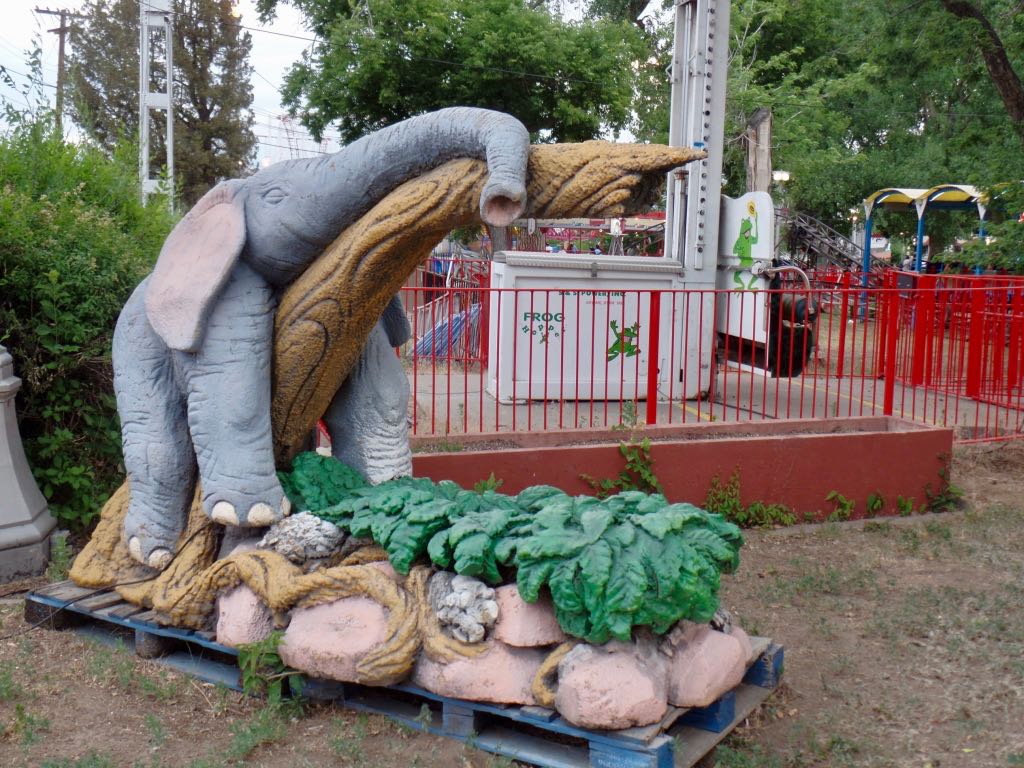 And here's just a statue of an elephant sprawling on a tree. 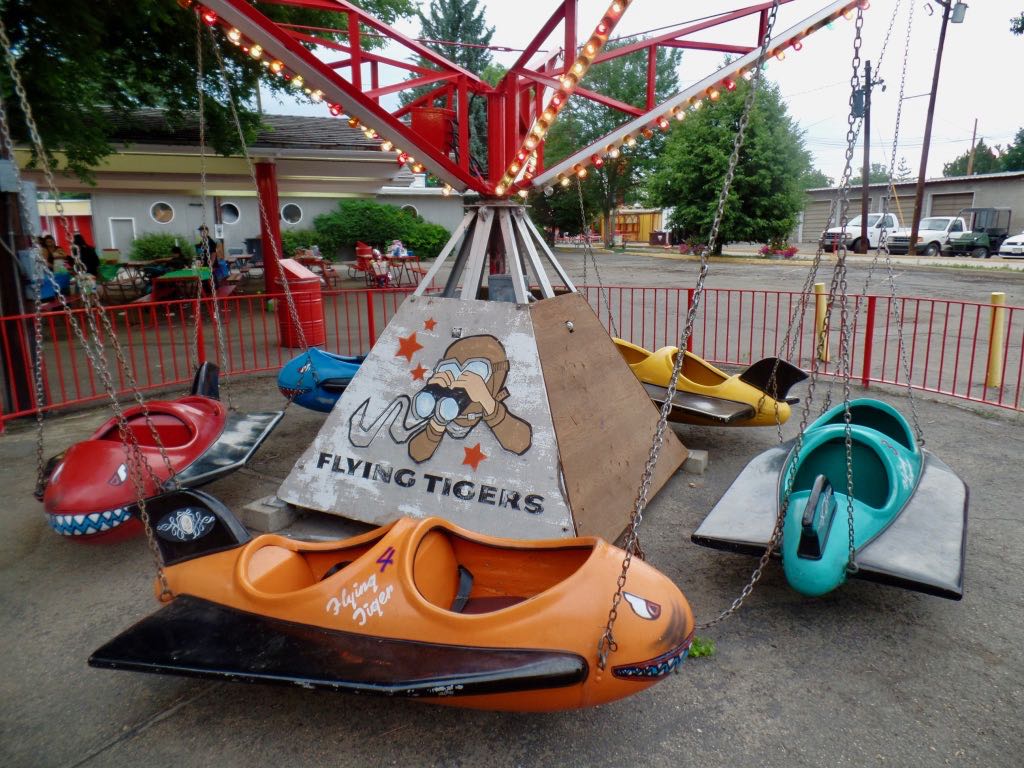 Kiddieland captive flying-airship ride. That base with its sharp pyramid makes me think of Conneaut Lake Park's kiddieland; this is certainly an old installation. 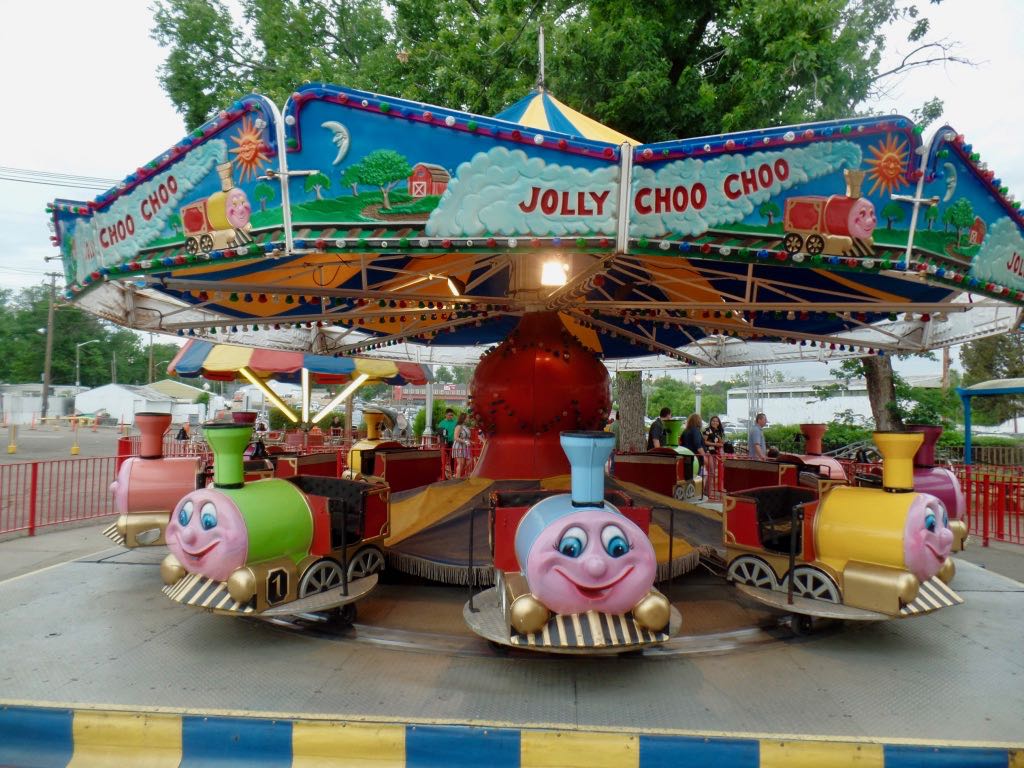 The Jolly Choo Choo ride; I think that the trains must rotate to get moving forward as the ride turns but I don't have the photographs to prove it. 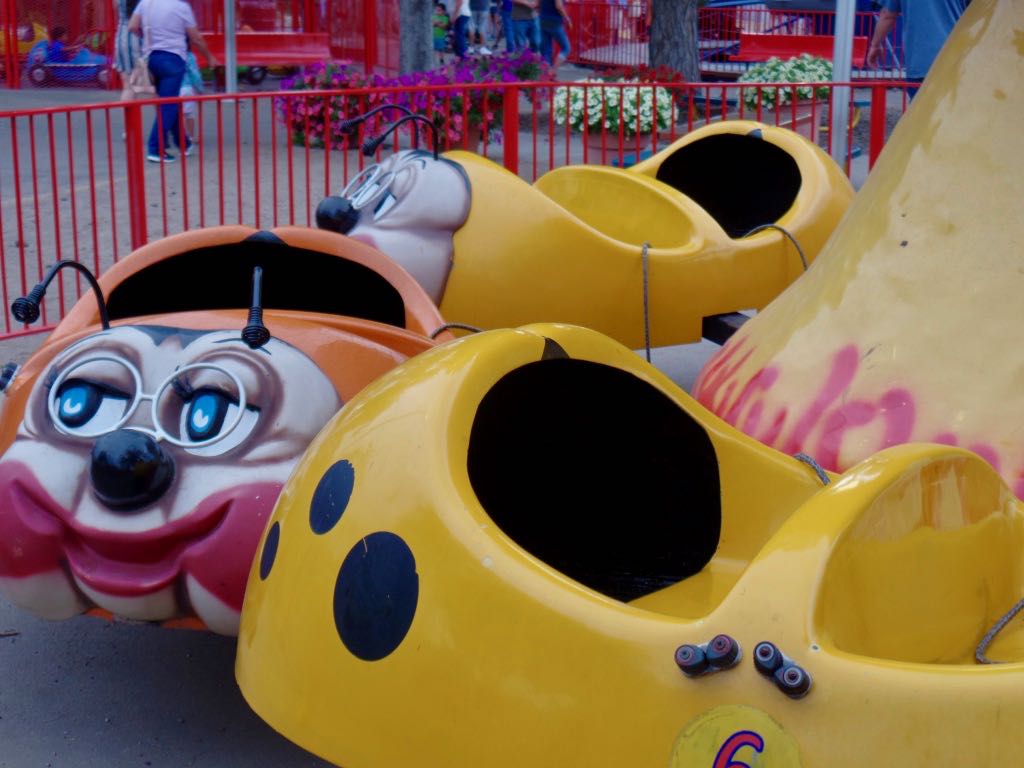 What a cute little insect ride. I wonder why the bugs all have such big glasses, though? 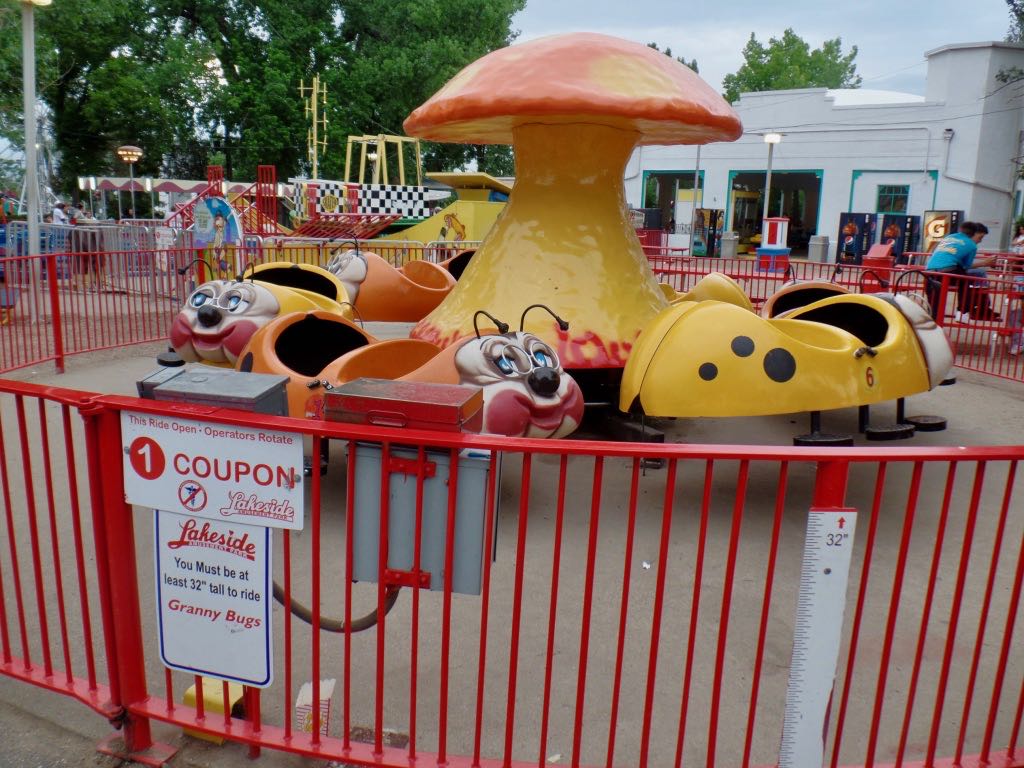 Oh, it's the Granny Bugs ride. That's why they have glasses. ... It sure looks like the minimum ride ruler has lost everything but the working part, doesn't it? 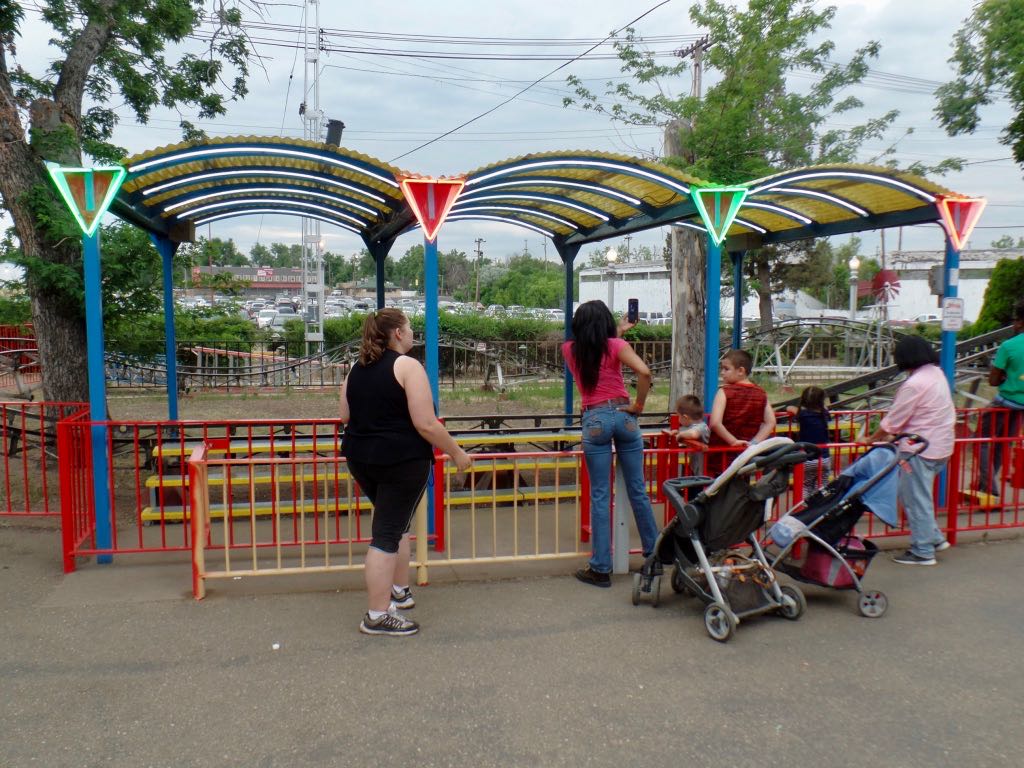 View of the Kiddie Coaster, the one roller coaster at Lakeside which we didn't ride. The lights are starting to come on for the evening. It was made by Miler Manufacturing, of Portland, Oregon; ten of their roughly 40 coasters are still operating. 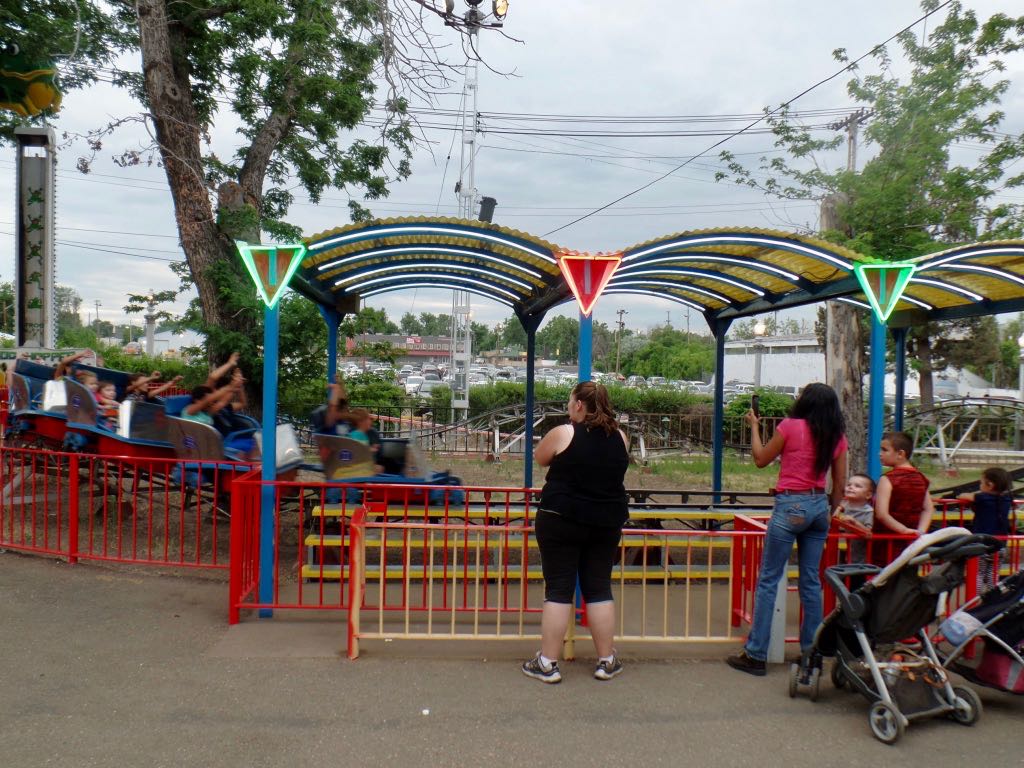 Kiddie Coaster rolling past. We couldn't get a clear answer whether unaccompanied adults were allowed, and it looked like such a knee-banging ride anyway that we weren't sure we wanted to ride it just for the credit.

Trivia: The newsreel industry estimated in 1953 that it could save $57,000 per year if censor-board reviews, and their feeds, were abolished just in the state of Ohio. Source: The American Newsreel 1911 - 1967, Raymond Fielding.

Currently Reading: Disney's Land: Walt Disney and the Invention of the Amusement Park that Changed The World, Richard Snow. OK, like, I get Snow treating as frivolous the lawsuit filed against Disneyland by someone attacked by the escaped pet lions of a person who was at the park. Not a park employee, just someone who went to the park and had a pet lion who escaped. But, like, here: ``Sandra Varely, rear-ended on the Autopia ride, suffered back injuries that required $120,000 worth of surgery. Her lawyers improved what already seemed a watertight case by getting a change of venue from Orange County. Even so, the jury took less than two hours to find for the park. Her husband said, `The situation with Disneyland, to put it bluntly, is that you can't sue Godin heaven'.'' End of chapter. I mean, without some further context there, that looks like a miscarriage of justice. The reasonable risks you assume by going to an amusement park don't include $120,000 worth of surgery. And granted the park has an interest in fighting any tort against it, but winning this case does not make them look like the good guys. What's happening there?