I absolutely love you but we're absolute beginners

I wanted to report about the Cohanzick Zoo Coati Day weather forecast but haven't found reports about it yet. If that changes, I'll do something.

Meanwhile, mm. Changes. The International Flipper Pinball Association put in some new rules about how it scores leagues. These severely nerf leagues where your seeding for finals are based on self-reported scores. Which is trouble since that's how Fremont has run, and while it's no longer the points bonanza it was, it's still very lucrative and is entirely why

bunny_hugger and I are ever in the state championships. And it's a big reason why AJH --- who with PH runs the Fremont events --- was the #1 seed last year, and is so regularly on top of the standings. But self-reported scores make it too easy to just cheat, even though we don't suspect anyone in Fremont of doing that. So the scoring changes are the worst of all possible things: the thing that is right that's personally disadvantageous.

AJH and PH worked out an alternative. If a designated scorekeeper records the score, then the nerfing doesn't happen. So they set up a more manageable thing, people playing unlimited-Herb-style on a bank of four games. This means you get points based on how many people your score beats, on each game. Also, a concession to the new IFPA rules: only the top half of players who enter can play in the A Division. This last particularly worried me. The great value of Fremont tournaments was that a lot of people entered, but come finals, only around 15-20 people would play; if only, say, ten people got to go to the meaningful finals? But AJH and PH felt that, besides being more legitimate a seeding system, this would let them hold shorter tournaments for the same IFPA point value. In fact, they planned for two tournaments for the end of January, and they plan to start holding three tournaments in a day come March. And they know how to get IFPA points out of a system. How would it all work in practice, though?

Well, my big worry was that there'd be fewer people entering --- the old scheme let people self-report scores from public venues all over the west side, even from people who had no intention of playing in finals --- and that, like, we'd end up just below the cutoff. That didn't happen, though: about 28 people entered the tournament at all and there were 13 people showing up for each, so, all that was at stake for the Herb-style scoring portion was your initial seed. The seed bothers me a bit, but only because I didn't do better; one of the games, particularly, really had my number and I got upset, during the couple hours before the tournament started on Saturday, that I could not do a blasted thing to improve on the lone game I played of it at the end of December. And a good seed matters: it gets you first pick of games. Or makes more likely you'll be put into a three-player group, when two players in each group advance to the next round.

bunny_hugger had the opposite luck. Another big difference: each round was only three games; no more would be needed for the tournament to be worth its maximum possible. In previous years rounds have needed four or five or as many as seven games. ... This is going to take some adjusting to. The advantage of a three-game round is that if you win one game, and just don't finish last in the other two, you're probably through. The advantage of a five- or seven-game round is, if you finish last in one game, you have time to recover.

bunny_hugger, in a killer four-player group for one tournament, wasn't able to recover. In the other tournament, she had a three-player group, one with AJH and that he ... did not dominate the way she expected, and that knocked her out quickly. Me, in both tournaments I made it through the first round handily. In tournament 2, I did this with three first-place finishes, which sent MWS home early, except that he carpooled with us. I got knocked out in the second round of that, after a third- and a last-place finish left me with no hope. In the second round of tournament 1, against the player who upset

bunny_hugger in that three-player group --- she said to ``avenge me'' --- I stunned myself: after a second-place and a last-place finish I figured I was done for. I had the last pick of game, though, and figured since it was ending my competitive day I should pick the game I could most certainly win on, and did, and this was enough to put me into finals.

bunny_hugger said she didn't mean me to avenger her that much.

Finals are notable because I had the last pick of the round, and chose Johnny Mnemonic. People wondered why I would pick that game when playing against AJH, who is a first-rate master on the game, and would go to put up 16 billion points on it. It's a high-scoring game, but three billion will usually win in any group that doesn't have AJH in it. Well, first, because I am a second-rate master of the game and can usually put up three billion points on it --- as it happens I did four, after two abysmal balls --- and I figured I wasn't playing AJH. I was playing everybody else. This finish wasn't enough to get me second place in the tournament, but, all right. I got third, and I felt really good about my finish.

Then we spent some time putting in scores for the Herb qualifying for next month. There'll be some hours of open qualifying before the end-of-February tournament too, but they'll likely be crowded and a bit stressed; any good games played last Saturday make next tournament day better.

Do I like the new format? ... I'm not sure. Three-game rounds are tight; one lousy game makes it very easy to sink the round, and end your play. On the other hand ... I think this might give me a competitive edge. In this format, you can get through a whole tournament playing nine games. In the older format you'd have to play fifteen or eighteen or even 21. (Yes, if you play well in the first games of a round you can slack off the last game, or even last two games, but ``play well'' here means ``win the first three games'' which is hard.) I am convinced, without actually looking at the evidence, that I get fatigued. Playing pretty good for nine games is a lot easier than playing pretty good for eighteen. The tournament rules allow us to pick a game only once per day, so if you choose one round to play Blue Chip, you can't pick it again (although other people might, if they think they can beat you on it). I have six games at that venue I feel confident I can reliably win, or at least finish a strong second in. Did I have the greater number of games in my pocket that I'd needed in the old format? ... Not really. (The older Fremont scheme would need more games, over the course of a two-tournament day, for reasons that just take too many words to explain here.)

But, then, I had a good day: a third-place finish in one tournament, a tie-for-fifth-place in the other. If this scheme scores like the old Fremont tournaments, then I had a really solid day, the pace that would put me back into state championship. It's easy to feel good about a system that went so well for me.

And all this playing did take less time than the old format did. But some of that may be eaten back up by starting a third tournament for Fremont days, as they figure to do from March onward. On the other hand, another chance for a final-four finish? That would be quite nice to have, too. Although now that I think about it, I wonder if the third tournament isn't meant for anyone who fails to make the A-Division cut, or gets knocked out in the first round, so they have something worth going all the way to Fremont for anyway.

So it's too soon to tell. There are probably something like 350 tournaments left in the year.

Trivia: According to the 1890 census New Yorkers averaged just under 300 mass transit trips each year, compared to 74 for each Londoner. Source: 722 Miles: The Building of the Subways and How They Transformed New York, Clifton Hood.

Currently Reading: The Great American Motion Sickness: or Why You Can't Get There From Here, John Burby. So it may be possible to find the latest possible date that this book was written, from Burby's casual mention how no United States city has lost population.

PS: Have a couple pictures of nothing in particular at Lakeside Amusement Park. I know I've been at this for a month now but don't worry: someday I'll get out of the park. 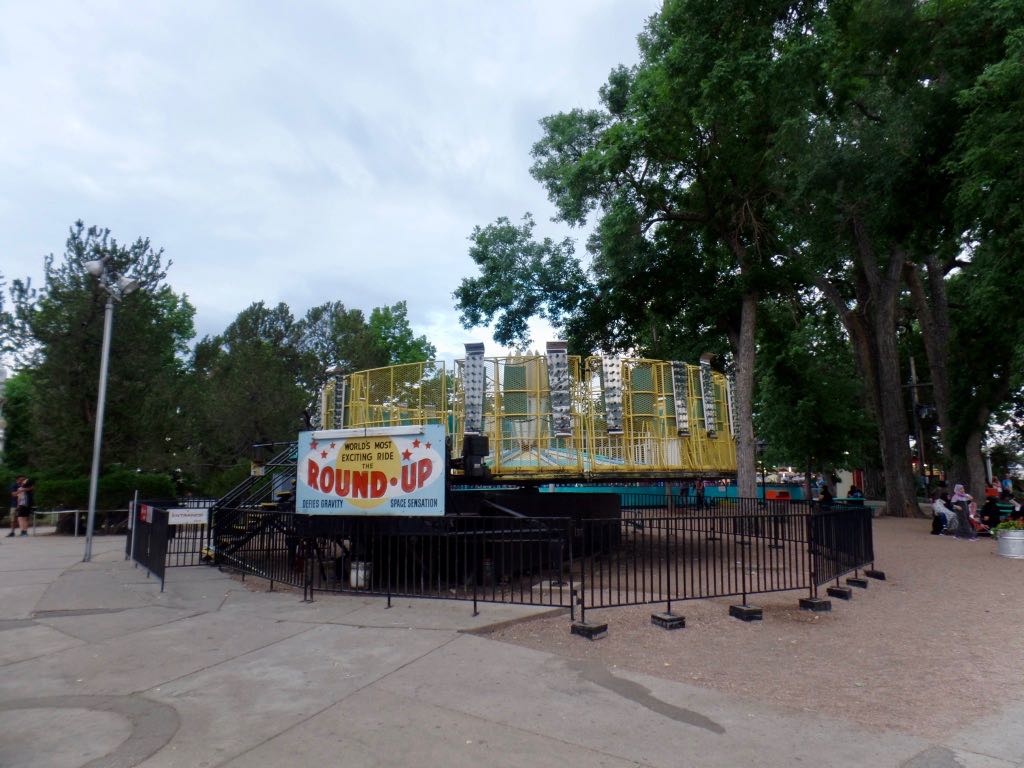 A good look at the Round-Up, with some glorious old-fashioned ballyhoo on the sign. 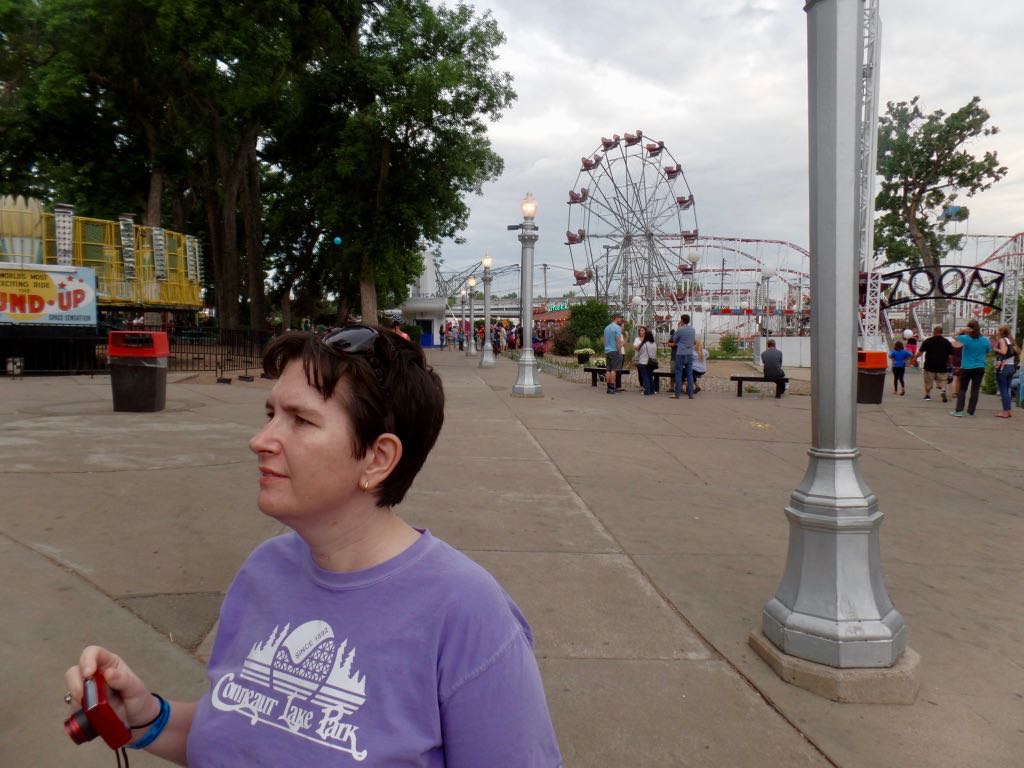 bunny_hugger, just done talking trash about Zoom: ``It's right behind me, isn't it?'' 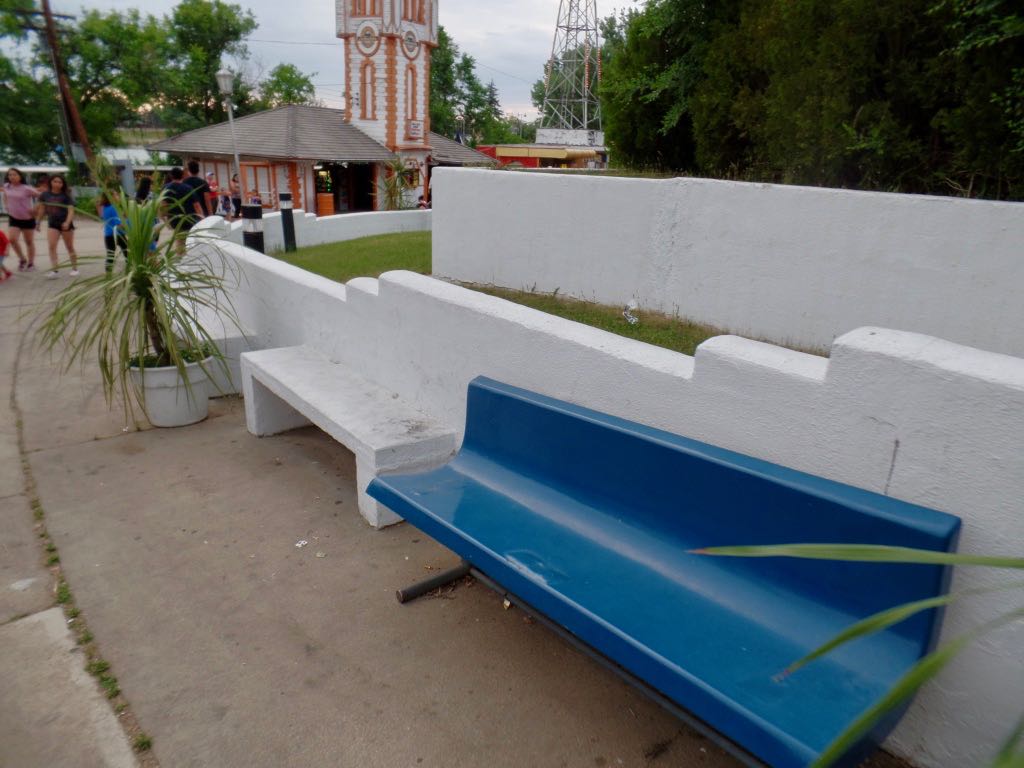 Park benches, many of them built into the curved walls along a downward-sloping hill, which is why the plastic bench here looks like an optical illusion.