Dancing fires on the beach

It's Thursday night, or Friday morning, so here's my humor blog looked at. Stuff that's been running hte past week includes:

So that said let's get back to Lakeside Amusement Park. The night is getting pretty serious here. 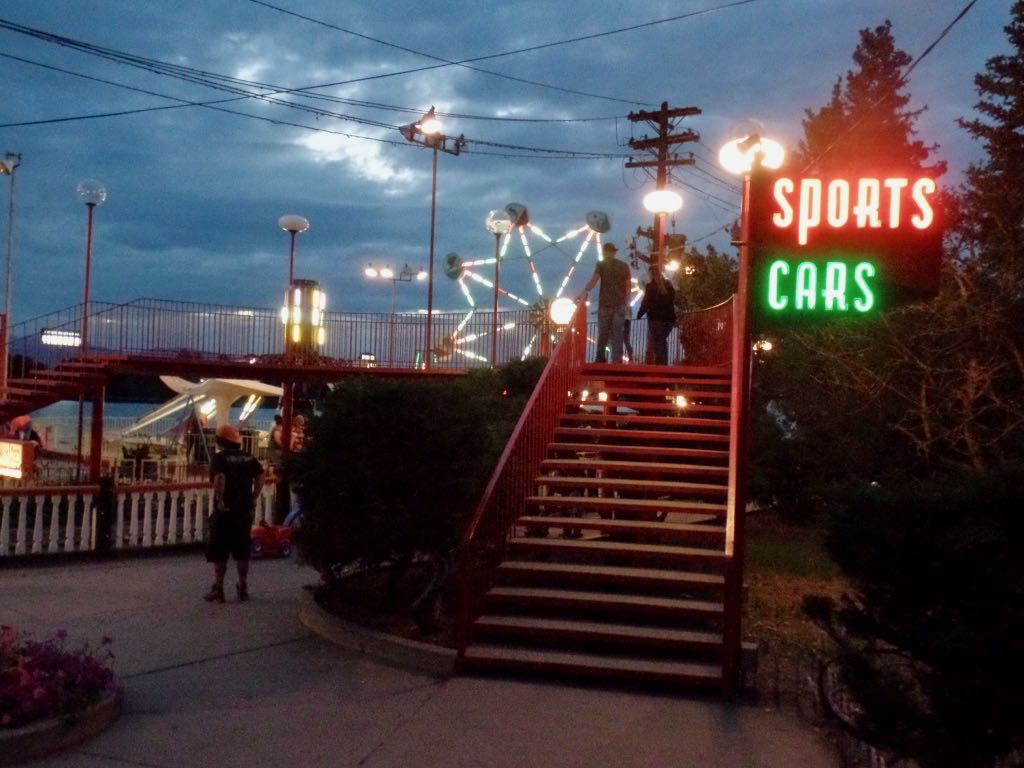 The sign promises the Sports Cars ride, if you go up these stairs to cross the train tracks safely. Note the star in the background of the Roll-O-Plane which we did not go on. 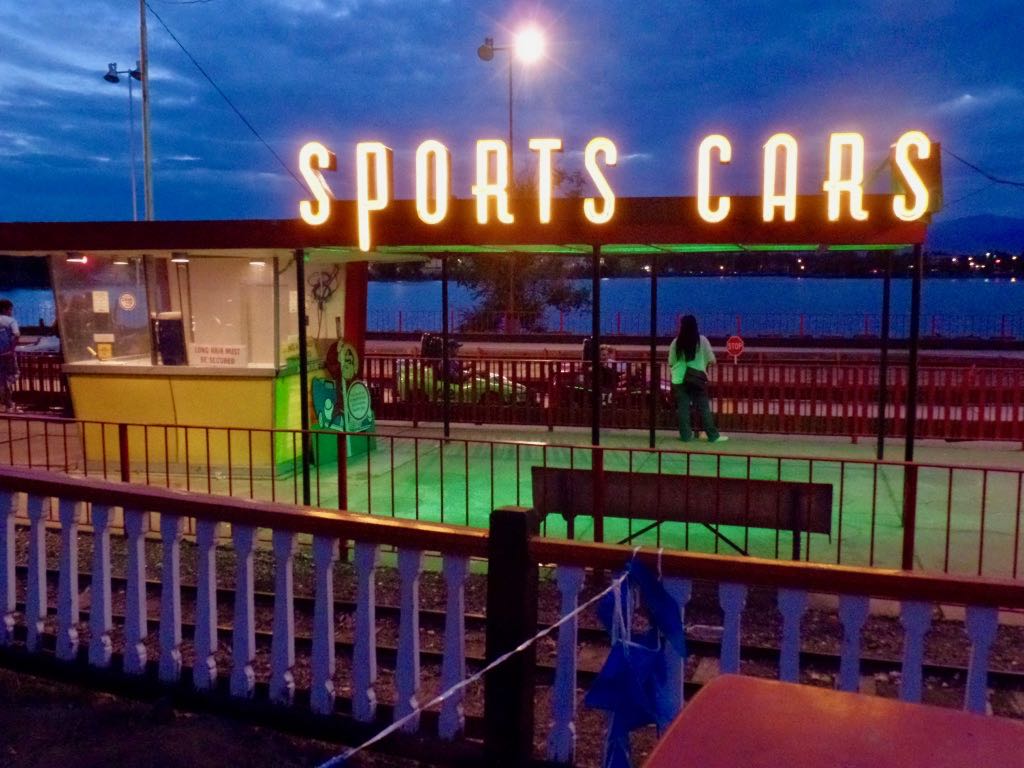 And here, across from the track, the promised Sports Cars ride. 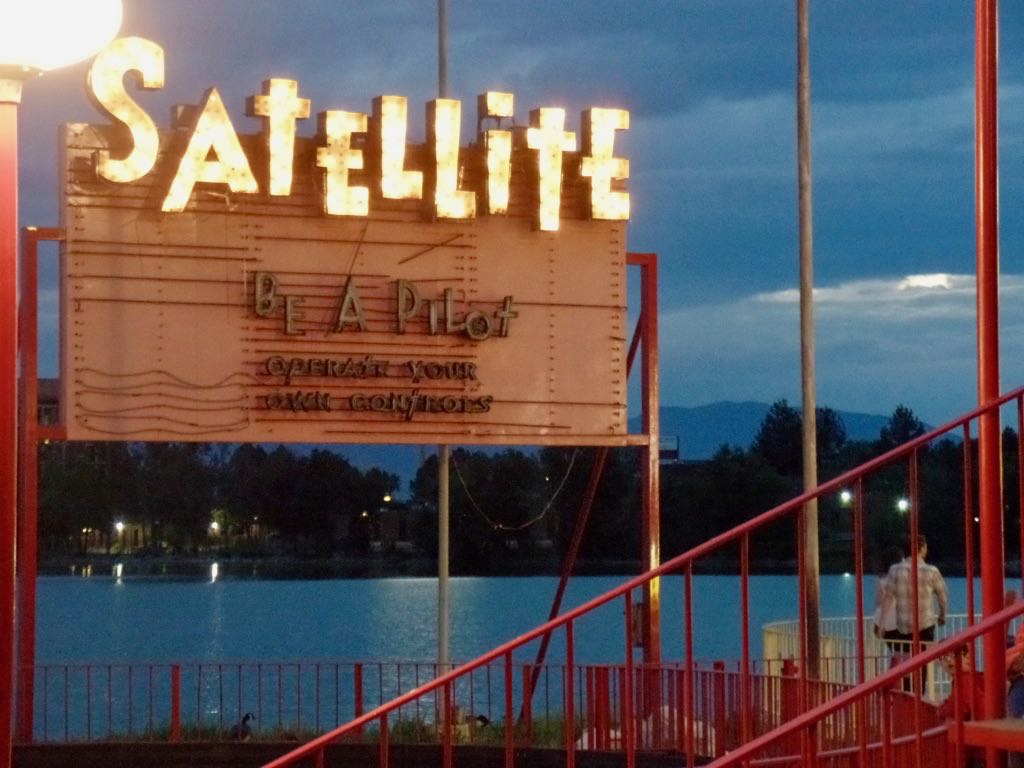 Also, the Satellite ride, offering you the chance to Be A Pilot. This is a Roto-Jet ride where you can control how high your captive rocket flies. 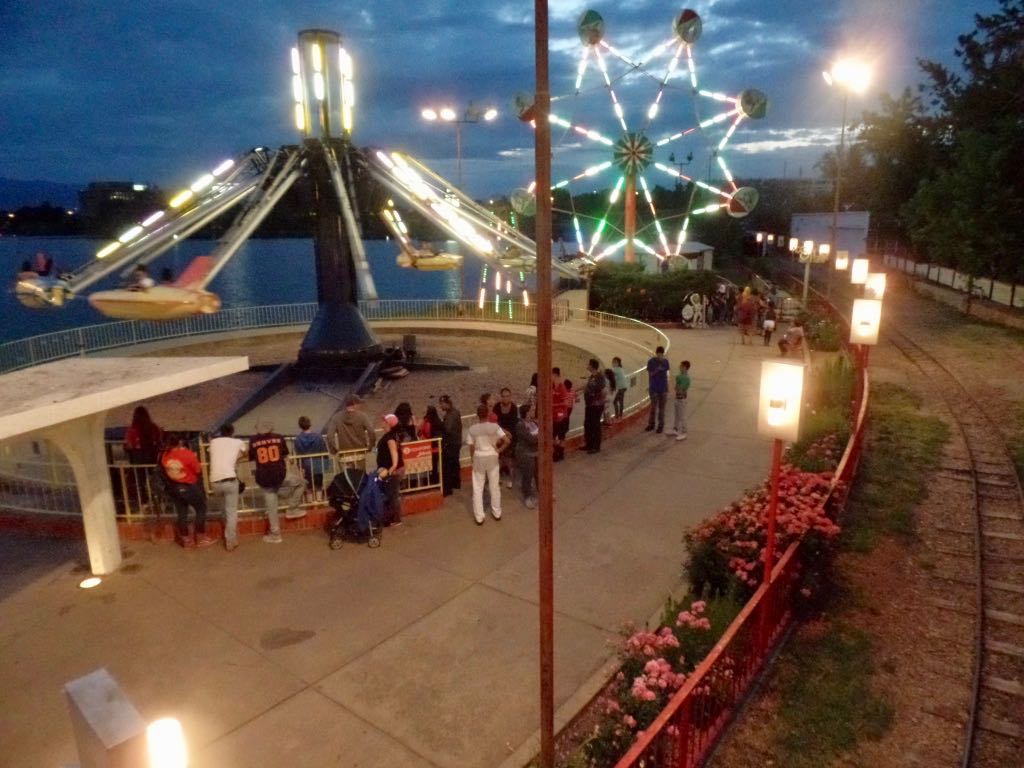 Looking out from the walkway to the Satellite and the Roll-o-Plane rides, plus a long string of street lights that line up so great. 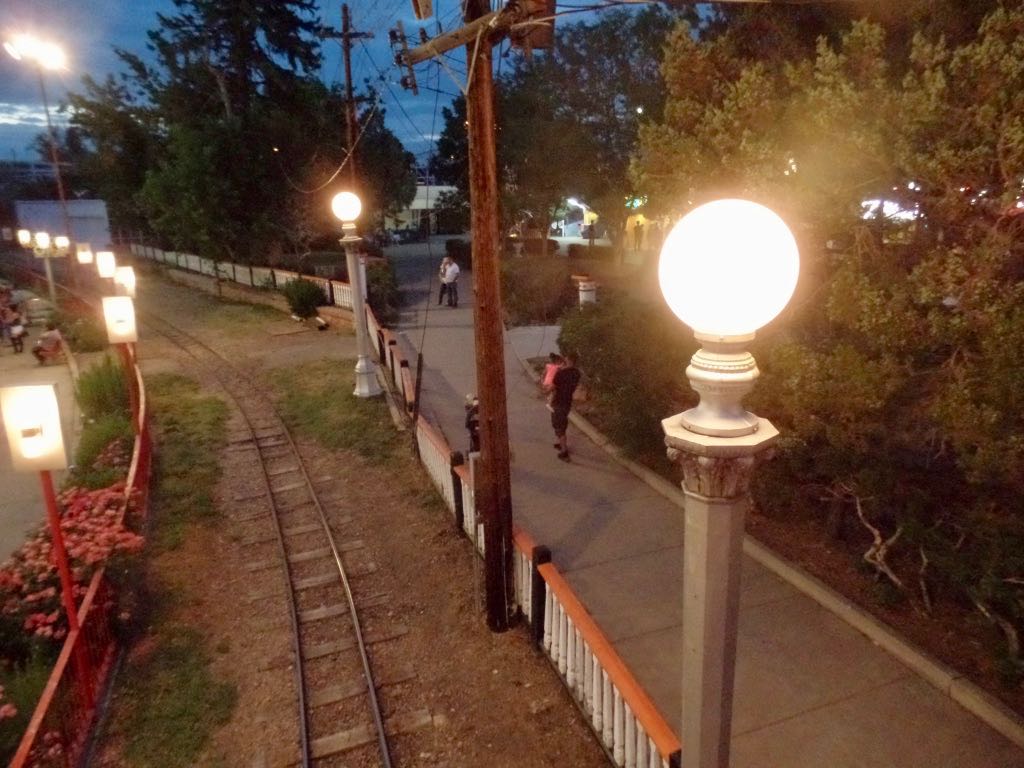 A different view from the walkway over the train tracks, at the old-fashioned street lamps on the right and the more gorgeous Modern ones on the left. 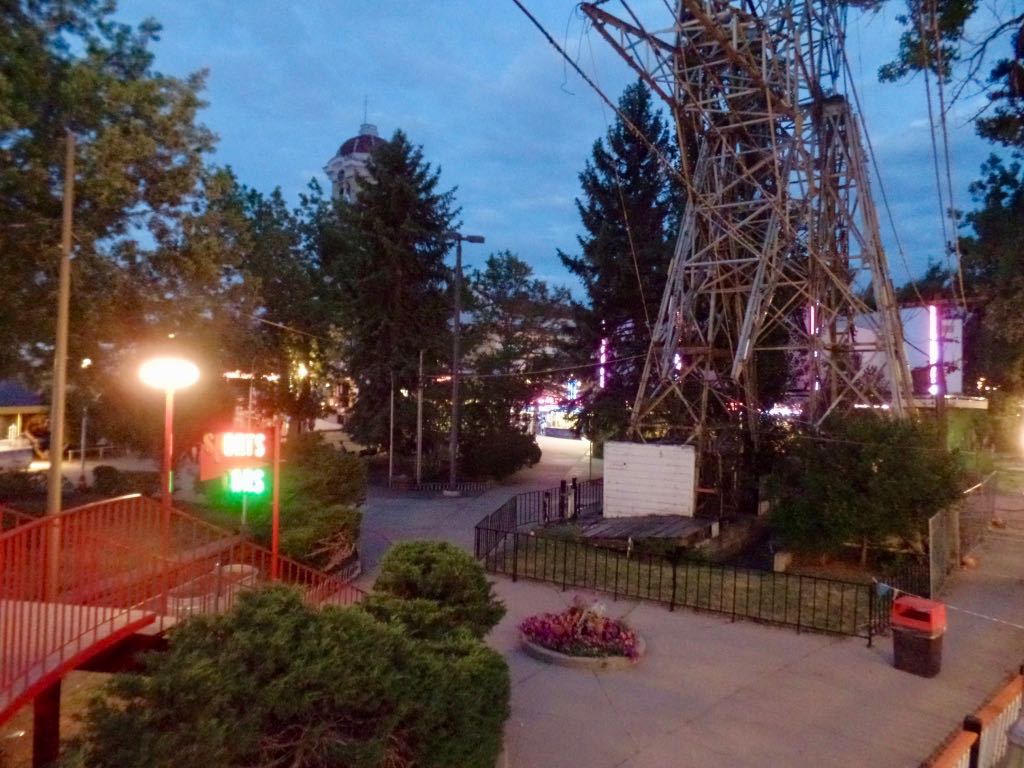 A view of Staride's remains, in the twilight, with the lights around it starting to give it definition. 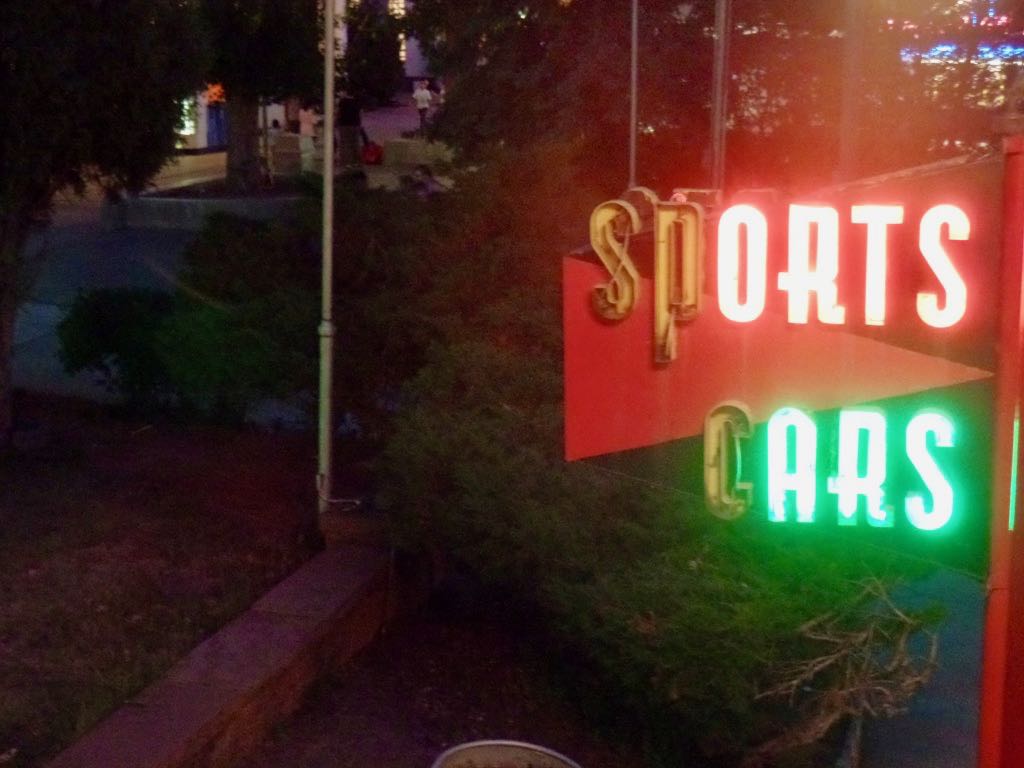 The opposite side of the stairway light promises the location of Orts Ars. Also I only now appreciate how the backing provides an arrow pointing to where to find the Orts Ars. 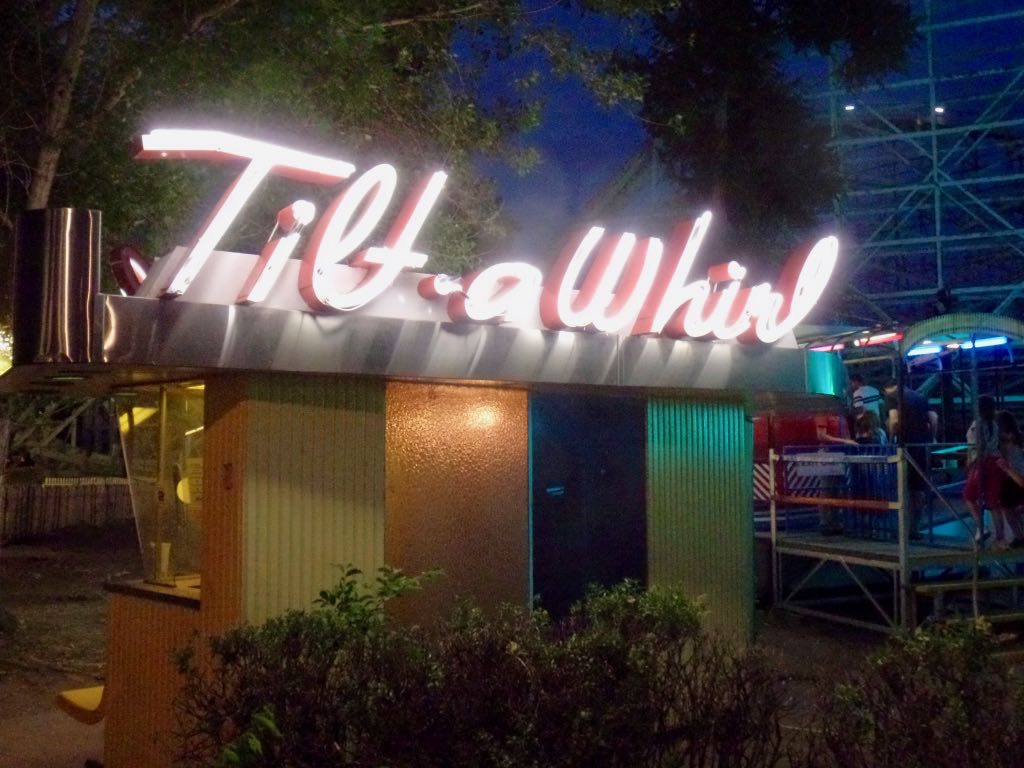 Scripty neon lighting for the Tilt-A-Whirl above its unused ticket booth. 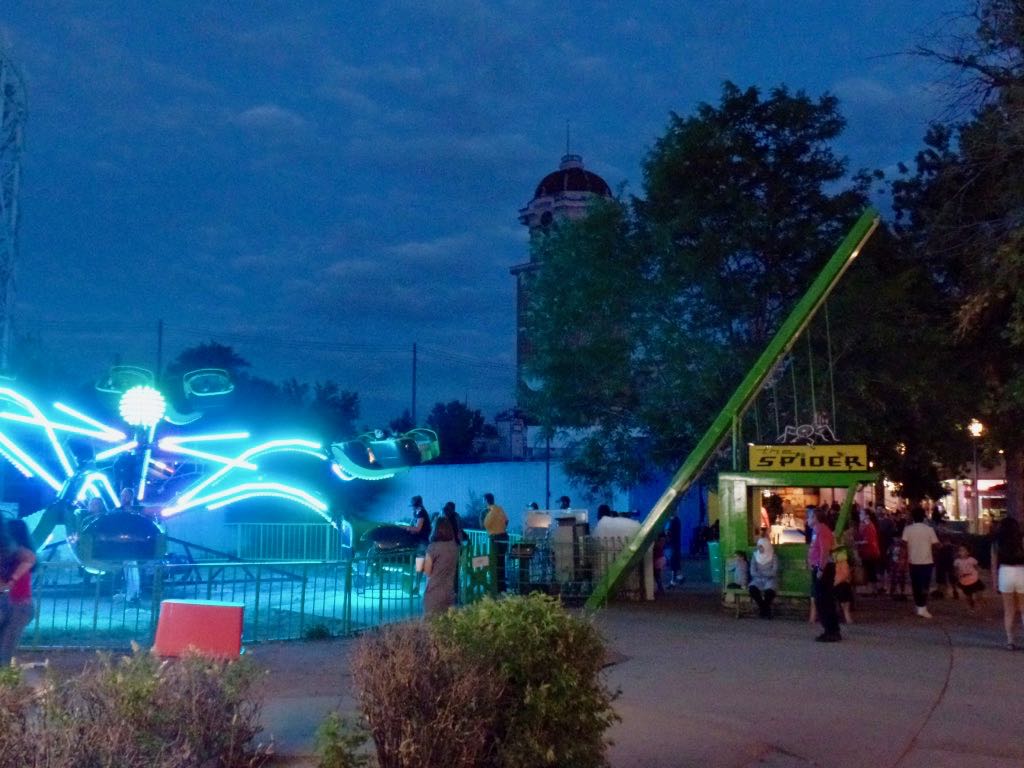 And here's the Spider under its own illumination, with a view of its station on the right. That isn't illuminated ... yet.

And now we've got the Scrambler shining through the night, with its sign and one of the signs for the Wild Chipmunk behind that. 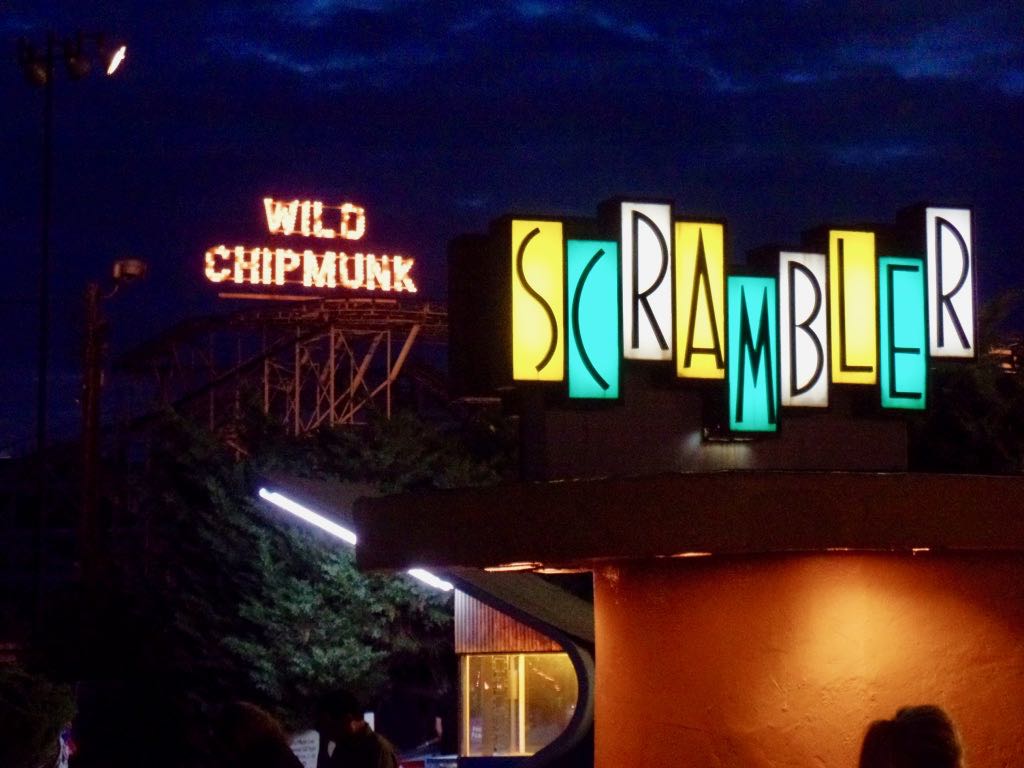 The wonderful Scrambler logo design, illuminated. Also in the background, the on-ride lights for the Wild Chipmunk roller coaster. 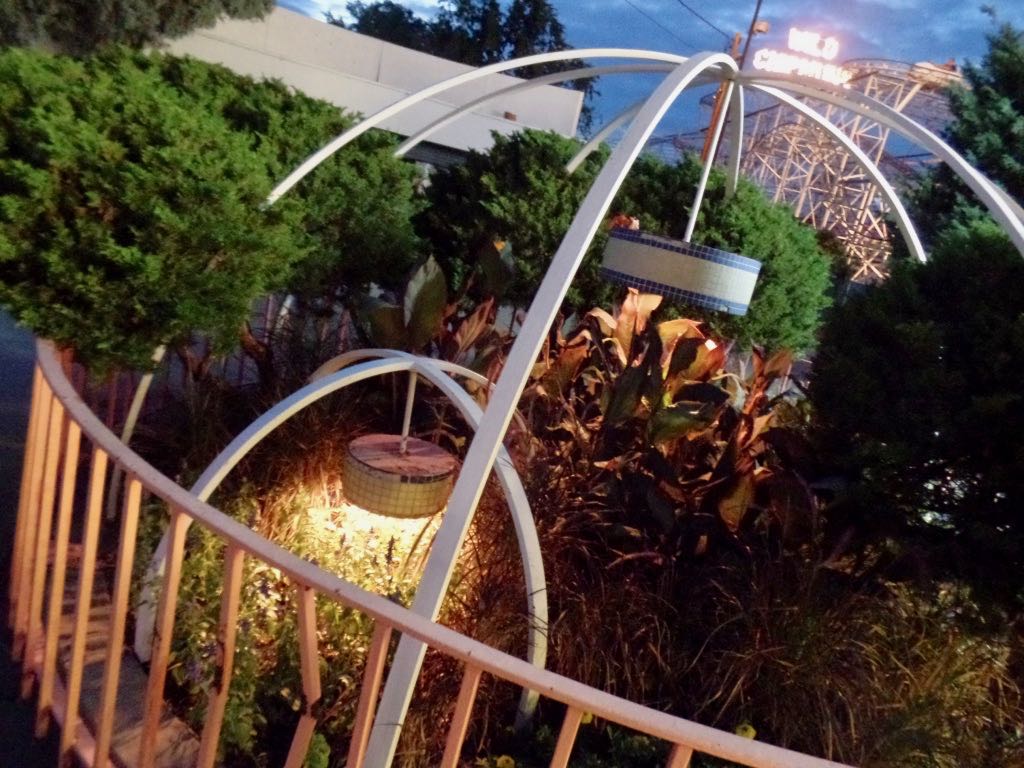 And here's one of the flower planters, with lights that make it look like flying saucers are teasing plants out of the ground.

Trivia: Two women, applying for the Royal Navy's General Service Medal in the 1840s for their service aboard ship in Aboukir Bay and at Trafalgar were turned down on the grounds that the precedent would prompt ``innumerable applications'' from other veteran women. Source: To Rule The Waves: How the British Navy Shaped the Modern World, Artur Herman. (These would be, largely, wives and girlfriends of crew or warrant officers, and sometimes women who dressed as men. And yes, I'm irked that Herman doesn't give names or a more exact date. It's in a footnote about the changing character of Navy crews, their becoming all-male as part of that.)

Currently Reading: Inside Las Vegas, Mario Puzo. So, not to challenge Puzo's perceptive nature, but in the prologue he explains how gambling is the one vice that hasn't got any compensating glamorous side, that nobody has any good stereotypes of the gambler and ... uh ... I realize that you're writing in 1977 and feel extremely defensive about your gambling habit but are you sure there's no image of gamblers as aspirational figures there, Mario? You're positive?