But the prettiest sight to see

And I hope you've enjoyed the pictures of Lakeside Amusement Park. I've been dwelling in it since the 3rd of January and I think fairly so: it's one of the most photogenic amusement parks I've been to, even with the deferred maintenance that's bothered it. Nevertheless I am looking forward to sharing pictures of something completely different! Ha ha ha, it's going to me more amusement park stuff. 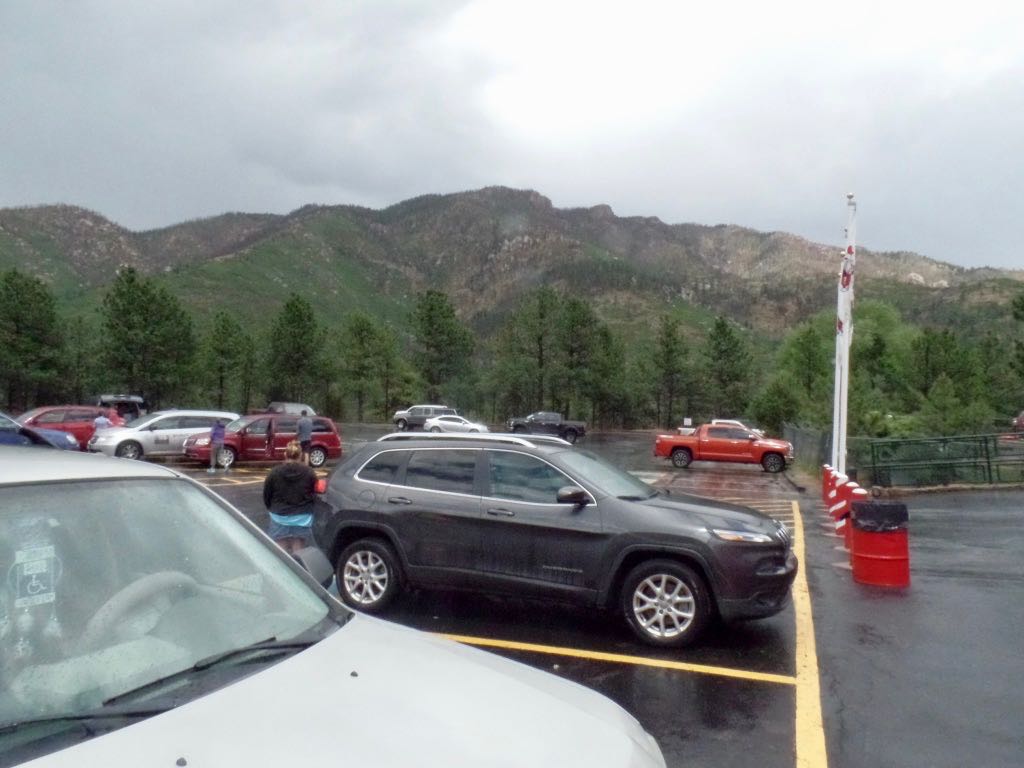 So here we are, nestled in the mountains of Cascade, Colorado, in a place that turns out to be right next to Pike's Peak, which would have taken longer to ascend than we really had. 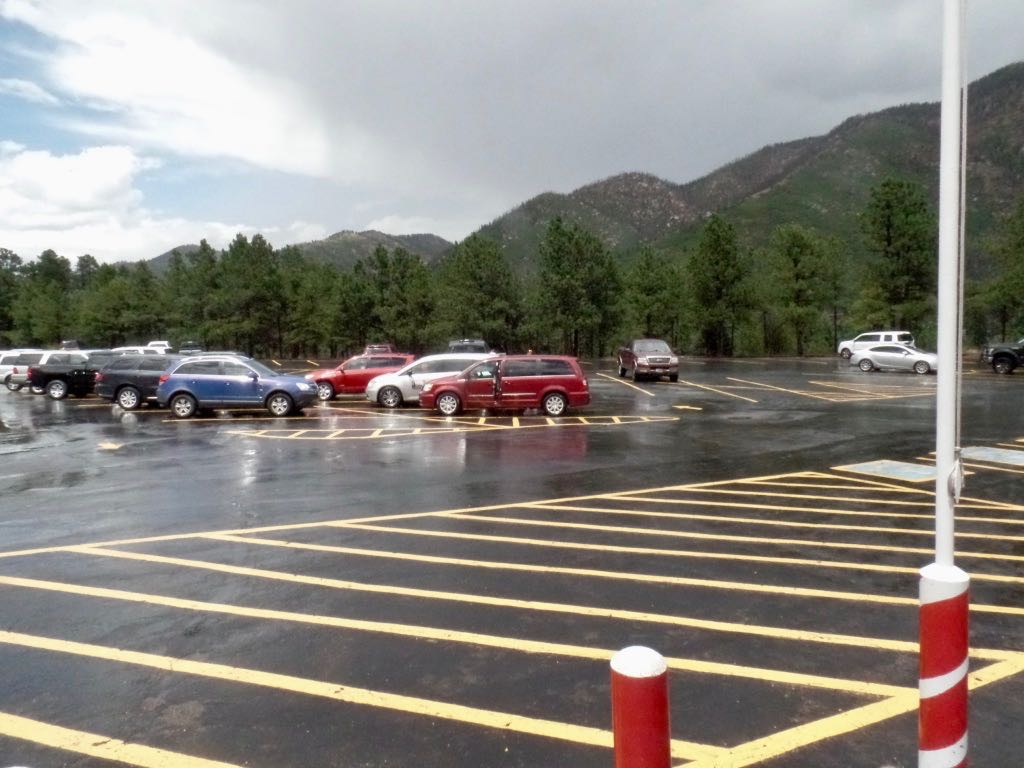 And which of these is Pike's Peak? I'm ... not sure. It's somewhere around here. Maybe off to the right. Anyway, you can see that it's been a very rainy morning, and it was colder than it had been the two weeks before, and we were not really prepared for this contingency. Still, what's important is where we were ... 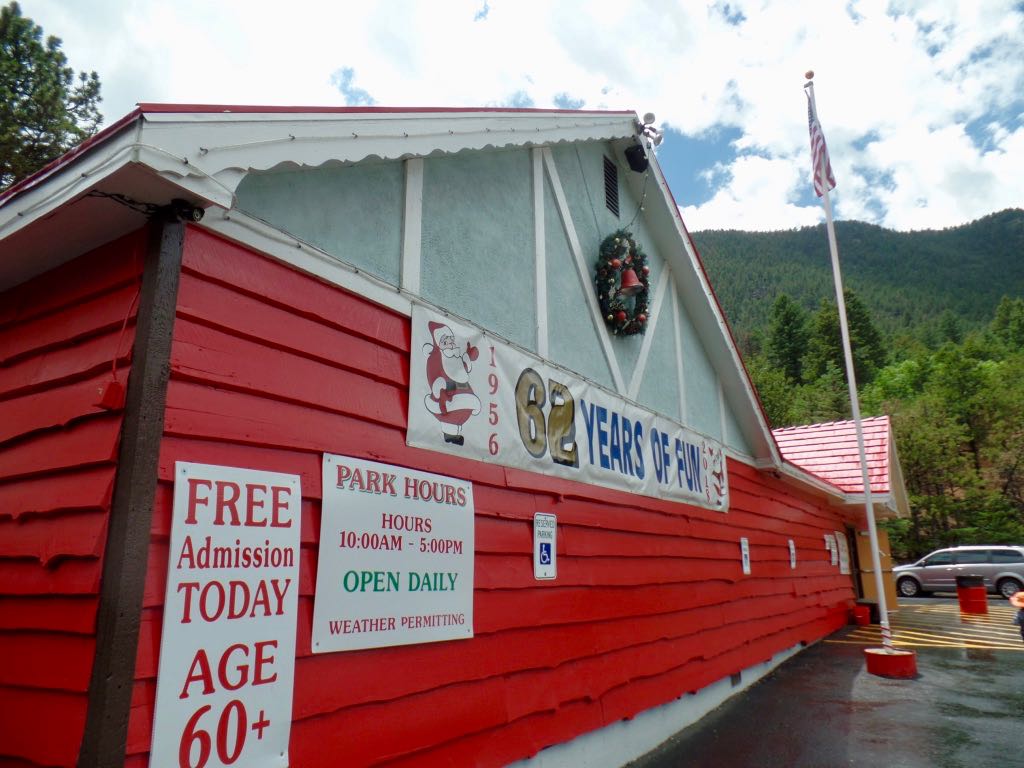 Yes! Another amusement park. Santa's Workshop. Which, as you can see, was free for seniors. Also, since this was Father's Day, they asked me if I was a father since there was some kind of discount, possibly free admission. I felt I had to be honest: no, all we had was two rabbits. 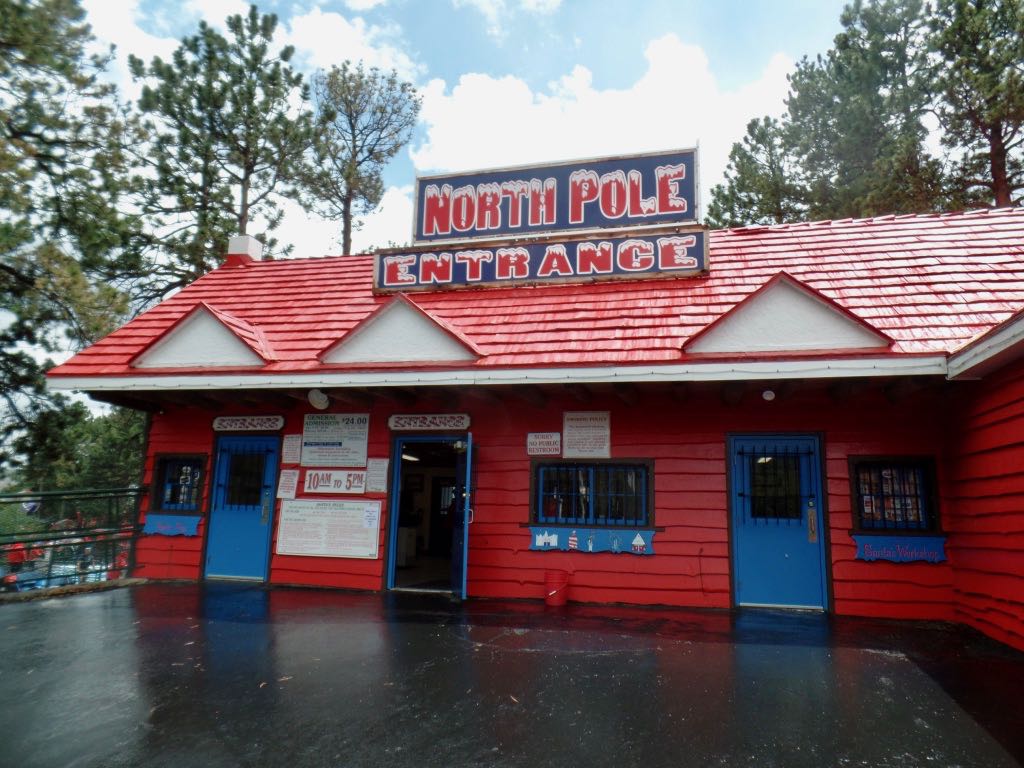 Entrance to Santa's Workshop. Rather like Story Book Land in South Jersey you enter through a building that's also the gift shop. 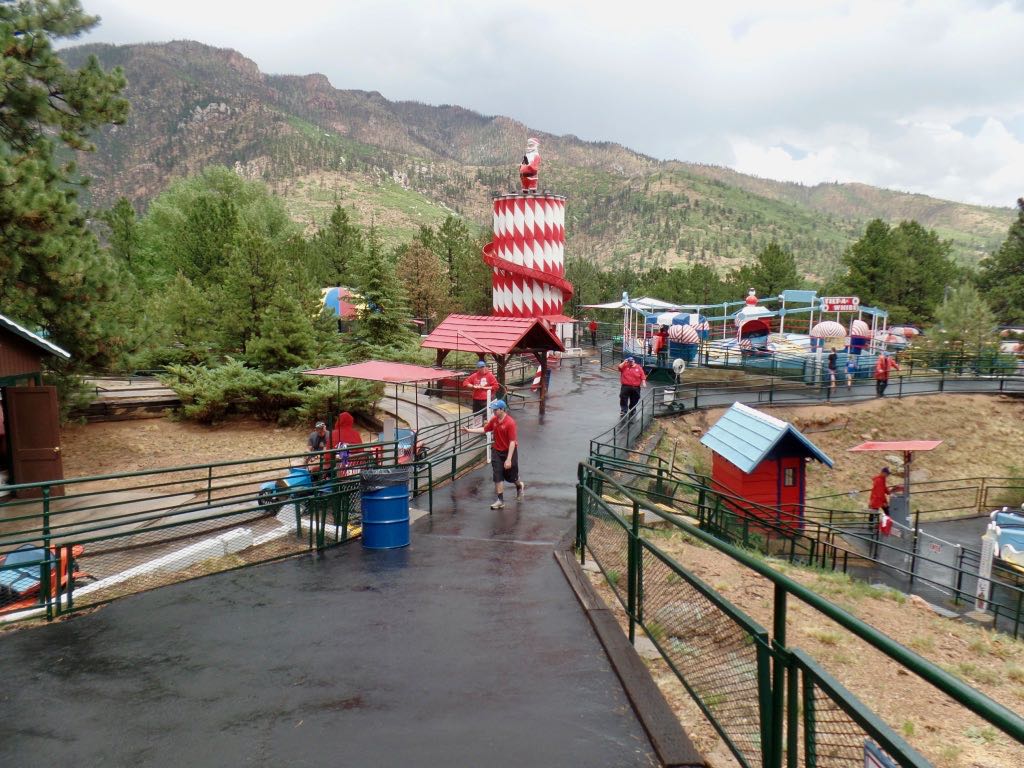 First look inside the park! This is a serious terrain park, built up against the side of a mountain and embracing its hilliness. 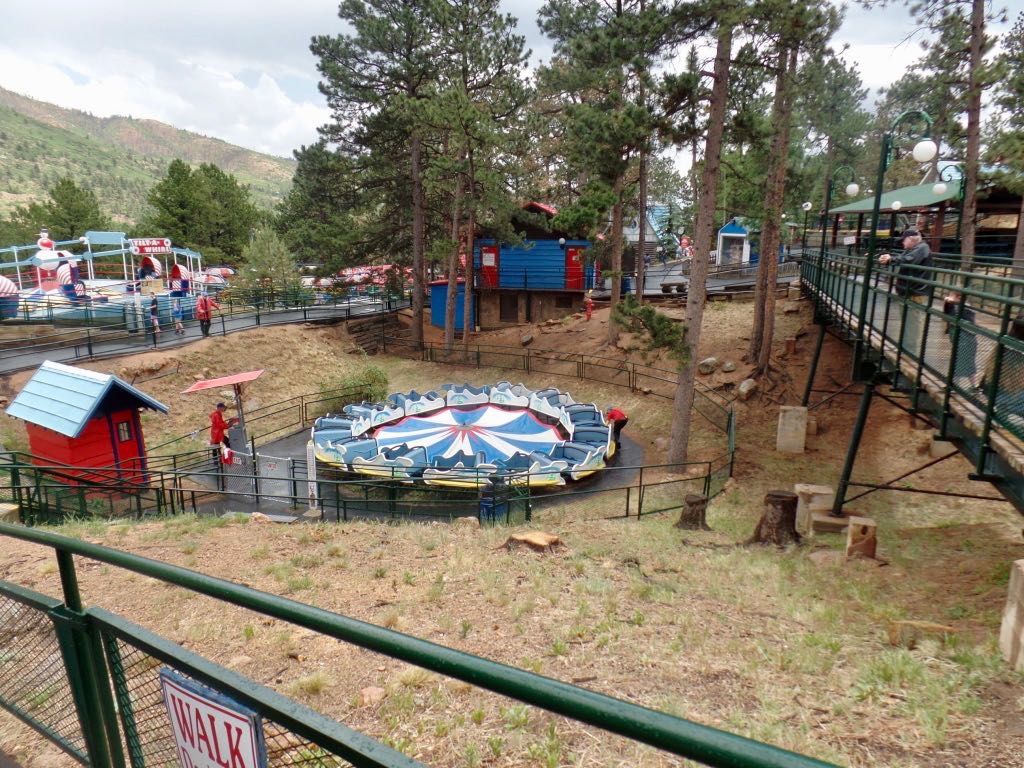 Peering way, way down at a Music Express-type ride, albeit one without canopy, which I imagine is normally just fine but which was a little less of a good idea on a rainy day. 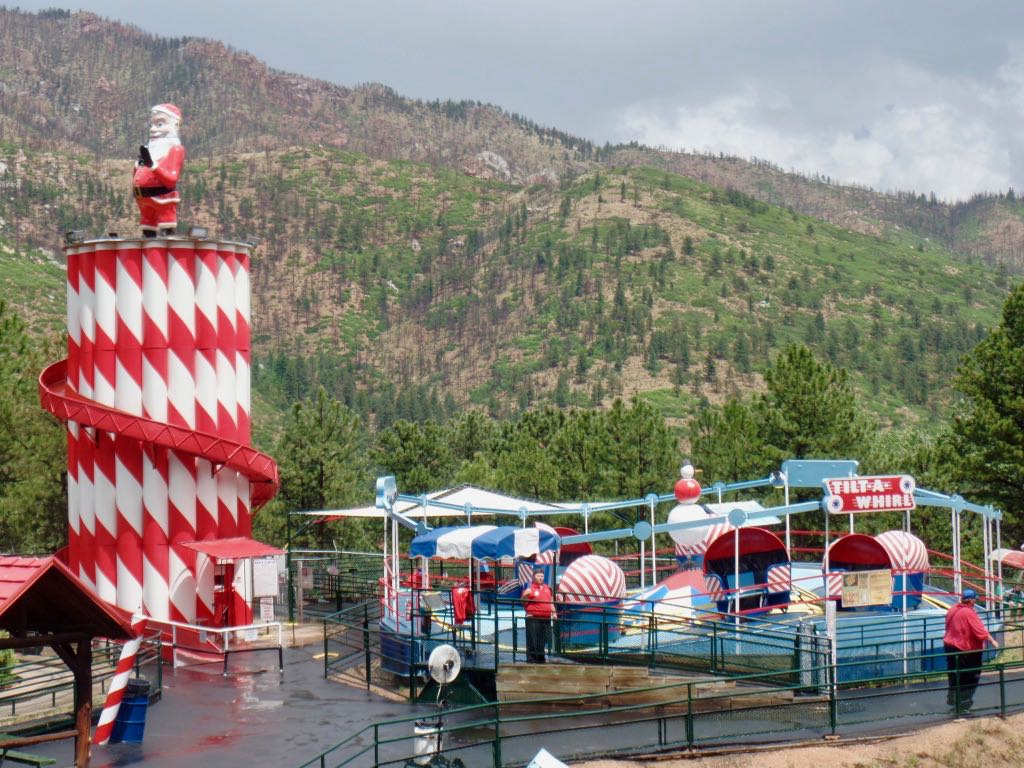 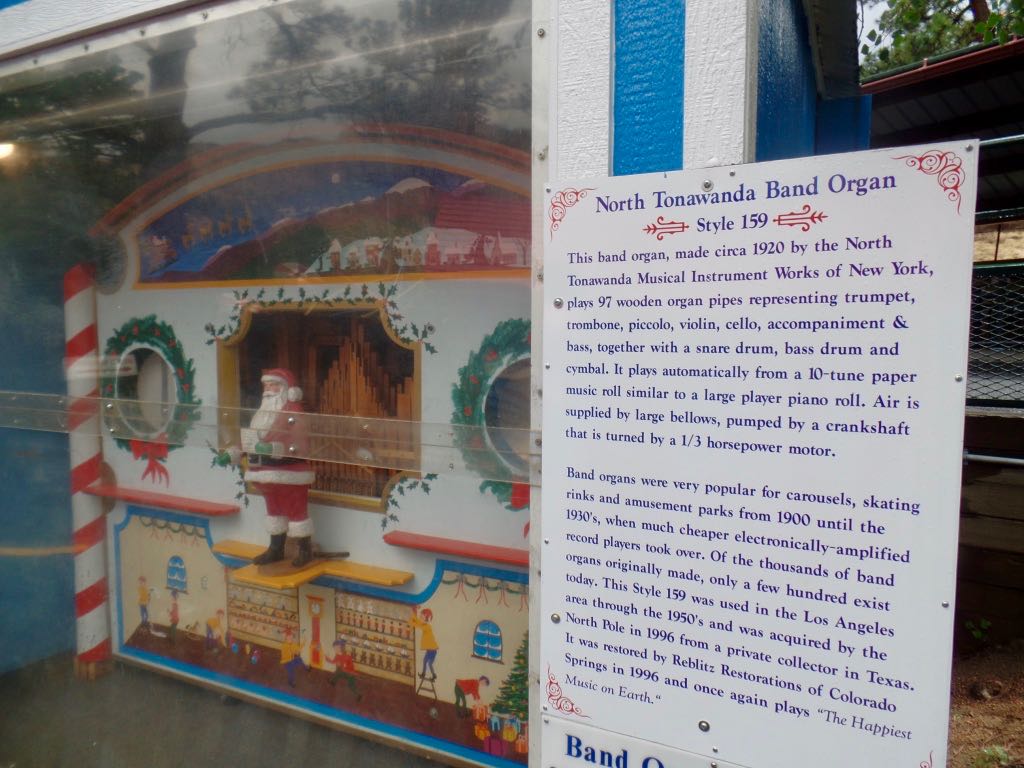 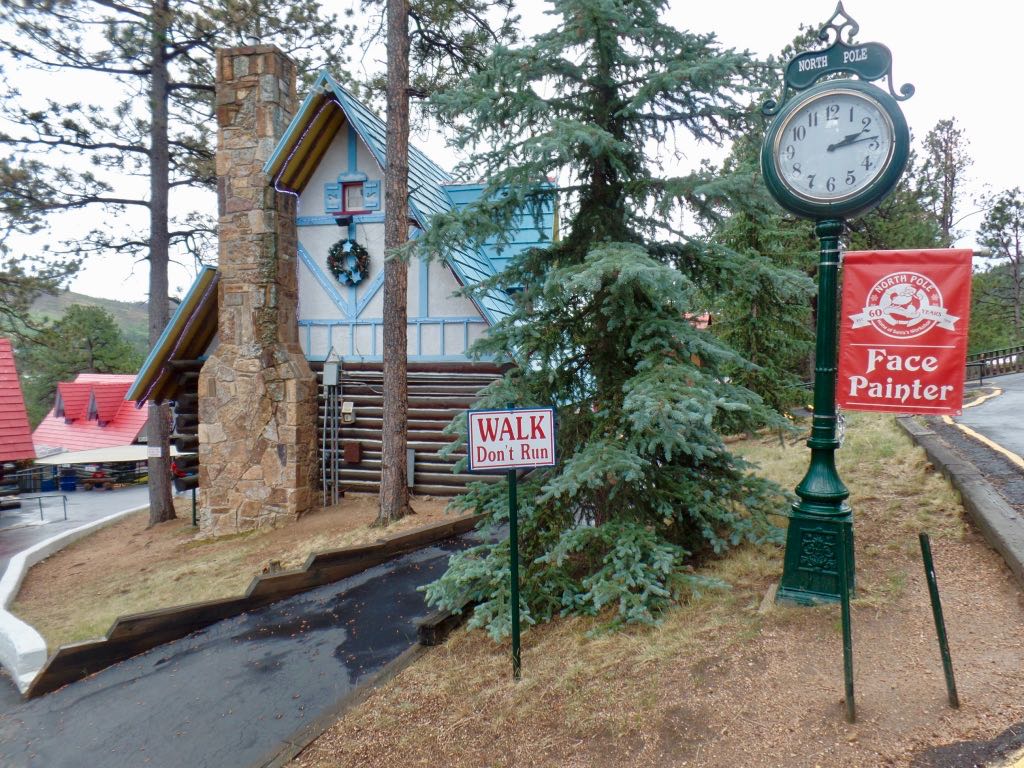 The park would only be open until 5 pm; we hoped that about four hours would be enough for the place, and traffic ate up an annoying lot of that. Still, three hours wasn't too bad, though. It's a small place, especially when you aren't and don't have kids. 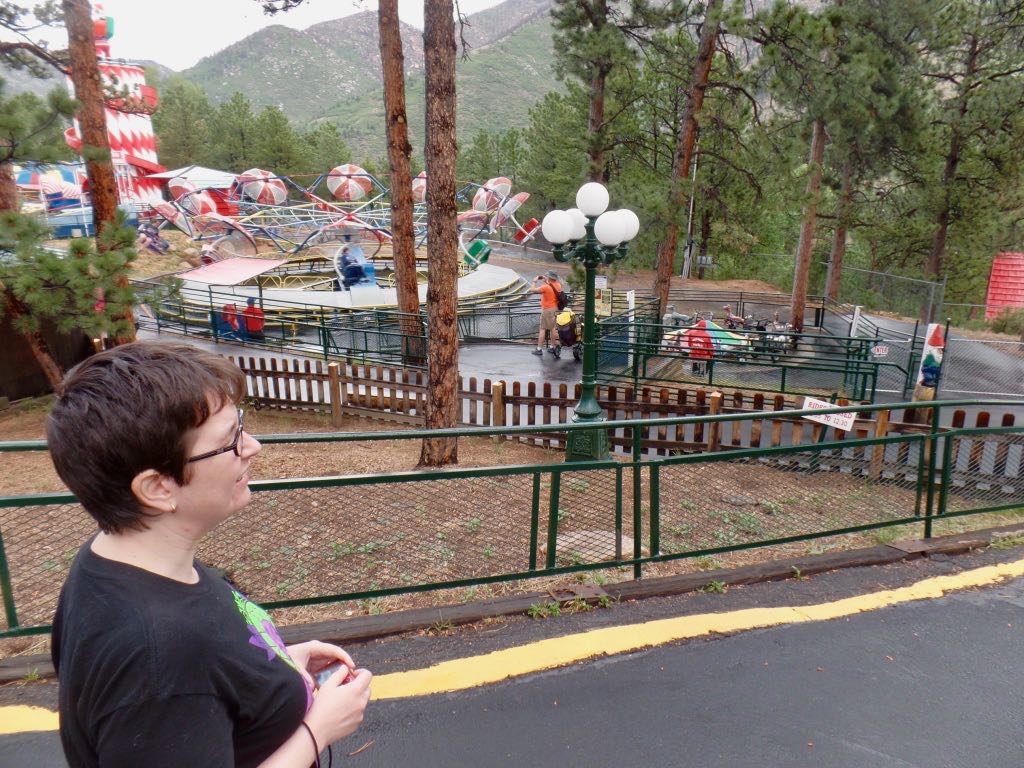 bunny_hugger looking down at more rides and setting. 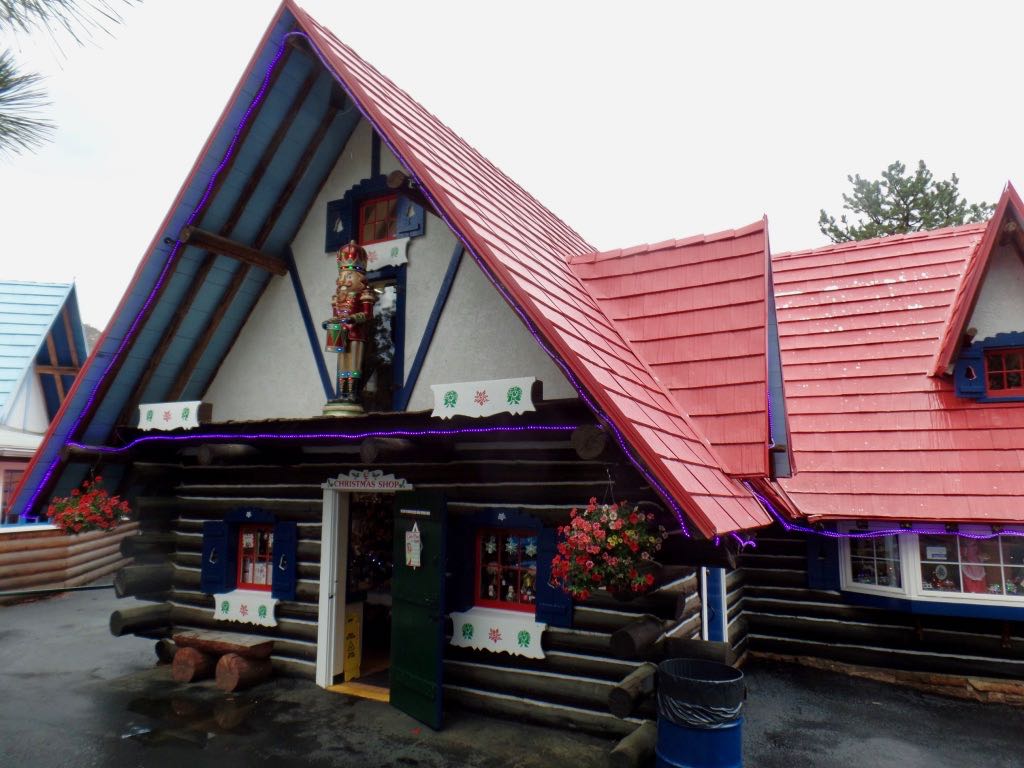 Of course the park has many Christmas shops, with this a nice representative sample. 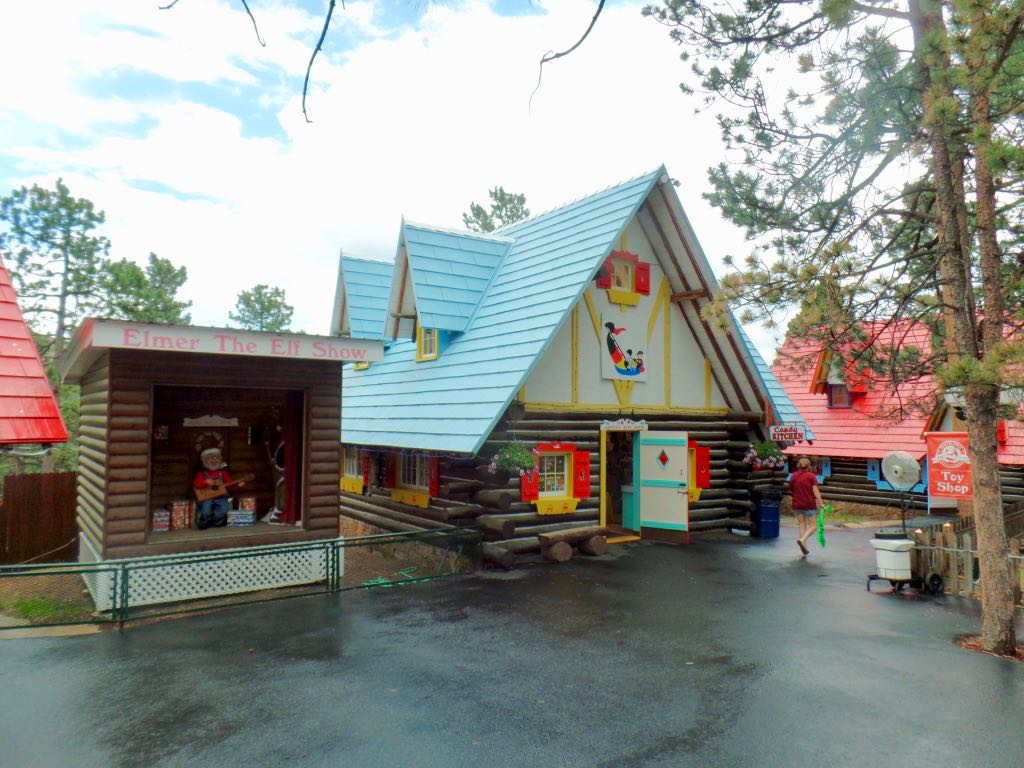 And on the left is Elmer the Elf, with his show of animatronic singing.

Trivia: In 1913 the Loose-Wiles Biscuit Company, maker of Sunshine crackers, opened its $2,000,000, 800,000-square-foot concrete factory unit in Long Island City, Queens. The building was swiftly named the ``Thousand Window Bakery'' for its considerable glass structure, and its 586-foot-long electric sign (LOSE-WILES SUNSHINE BISCUITS) could be seen seven miles out to sea. Source: Greater Gotham: A History of New York City from 1898 to 1919, Mike Wallace.

Currently Reading: The Great Salad Oil Swindle, Norman C Miller. Miller points out how when the scandal finally broke, all the companies that had lost money pretty much just trusted that eventually American Express would make it all good, and American Express was allowed to just decide how much they felt like paying for this, and it would just be so awkward and embarrassing if anyone quarreled with them about it so that ... like ... everybody just shrugged and went on, resolved that nothing particular really needed to be changed. Also there's a weird side thread where American Express Warehousing, the subsidiary unit that was actually responsible for certifying the existence of imaginary salad oil, got split into two companies, one doing imaginary salad oil and one not, with the other side getting sold off; after the scandal, some creditors sued the not-salad-oil side, which had nothing to do with anything, and got a nine million dollar judgement against it; this was, mostly, a way to get American Express to make a better offer.