Eight miles high and when you touch down

Valentine's Day was a bit low-key around here.

bunny_hugger has had one of those colds that drains all the color from life. And, separately, a doctor's appointment that took up the whole morning. In the evening she mentioned that we were going to a pinball tournament the next day, though. RLM was having another tournament in his fairly-new facility just outside Grand Rapids. Bit of short notice but, that's all right, I can roll with that. When she started to talk about a tournament I thought she was talking about a new Bells and Chimes tournament, since

bunny_hugger's wanted to get to those more often. It would be a morning tournament, annoying, moreso as RLM wanted everyone checked in by 10:30, but we've certainly done worse.

bunny_hugger packed a cooler with drinks while I showered and all. We didn't need to bring food; RLM was going to provide pizza. We started out in my car, to find the low-tire-pressure light was on and I don't know whether that was legitimately low or whether it's just reflecting that it's been bitterly cold. Anyway, we swapped out to

bunny_hugger's car, and in the confusion I never noticed that she didn't get the cooler out of my car. Which would have been a trick, since she had never put it in my car.

I'm only about 40% sure I could guide us to RLM's place unaided. My satellite navigator has the place in it, so I brought that in case hers did not have it recorded. It didn't, but she had the address, so now it is recorded. And we got started, later than we really wanted but still on time to get to RLM's by 10:30 ... with even a few minutes to spare, if there were no late traffic problems. We got almost to the point where I-96 splits off the spur that goes into Grand Rapids when

bunny_hugger told me to stop the podcast. She had a confession.

When she said we were going to a pinball tournament, she was lying.

We were going to something in Grand Rapids instead.

She had the address for the place, and could I put that into the satellite navigator instead. All right. And did I have any guesses what we might be doing instead?

No, I had no idea. This kind of fib would be the sort of thing to get someone to a surprise party. But it's not anywhere near my birthday, nor our anniversary, and while it's kind of close to our designated relationship anniversary (Leap Day) it's not all that close. Possibly a concert? But then we similar logical problems: why keep that a secret? Also, who'd be starting a concert at 11 am? (Well, something with upper-class connotations, like an orchestral performance or something.) Longer-shot thoughts: a play? An (animals-free) circus? Going to one, as a surprise Valentine's Day present, that starts to make sense again.

We got to the address. It was the Grand Rapids Public Museum. Which made, like, a concert or opera or play a pretty low-probability event, and almost knocked out the circus idea. All

bunny_hugger would tell me --- and I did say I wanted yet to be surprised, so it's not like she was teasing me by withholding information --- was that it started at 11, and doors opened 10:30, and it had sold out. Well, the tickets were free, but they had all been claimed. All right.

As we pulled up to the museum I noticed, as in paid attention to, the Apollo boilerplate capsule the place has on the corner. The capsule, BP-1227, was lost in 1970 during recovery training exercises, discovered by a Soviet fishing vessel, or by a Soviet ``fishing vessel'' if you prefer, returned, and set up in Grand Rapids as a time capsule in 1976. Just a neat thing to observe.

In the entrance lobby

bunny_hugger showed off her tickets and we got wristbands. We also overheard a couple who were upset to learn that they had unnecessarily bought general-admission tickets to the museum with their event reservations; the event was free and did not demand museum admission. I do not know how this resolved itself. I did look around for clues, but found nothing distinctive in the entrance hall. Just, you know, the signs listing admission prices for the museum, the planetarium shows, the Bodies Alive exhibit, and boasting of their antique carousel. A group of people with wristbands all waiting for the event venue to open. No real hint for what the event was, though.

And so that's the state of deception and intrigue which I faced, Saturday morning. Also, the discovery that

bunny_hugger can get me to just shrug and go along with anything by the expedient of declaring ``it's for a pinball event''.

PS: Please enjoy a nice trio of pictures from Santa's Workshop and our visit to it. 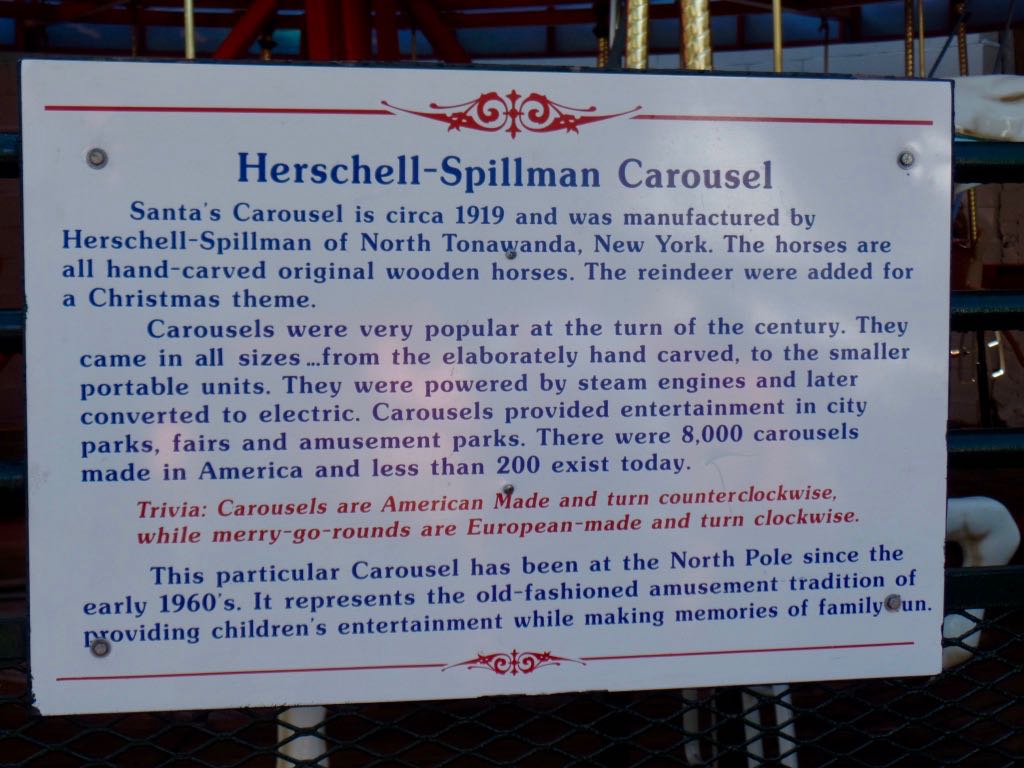 Sign attempting to curate the Santa's Workshop Herschell-Spillman Carousel. The trivia is completely wrong; there's no difference between a carousel (or its alternate spellings) and a merry-go-round, however much people really want there to be some division. 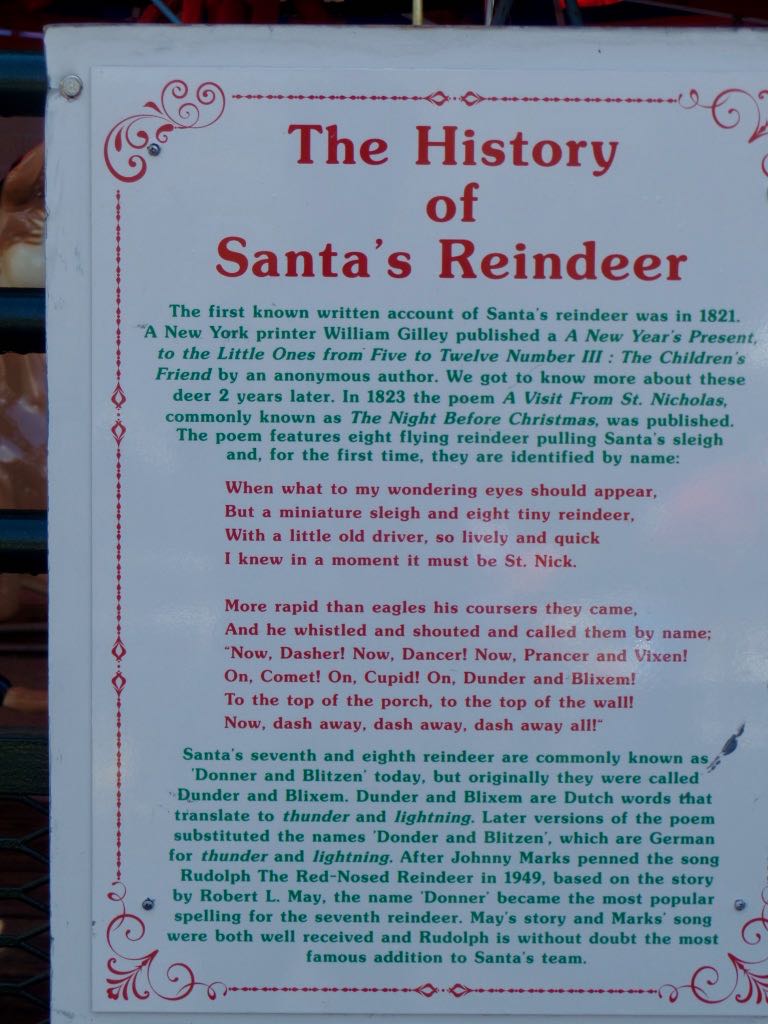 The carousel is themed to Santa's Reindeer, sensibly enough, and they also have a sign curating that part of things. My confidence in their research was shaken by that merry-go-round/carousel distinction they tried to draw, but I can say that the assertion of the reindeer being named ``Dunder'' on first printing is true: the Troy Record (at least) once reprinted the original newspaper appearance of the poem and, yes, Dunder it was. So that rebuilds some confidence. 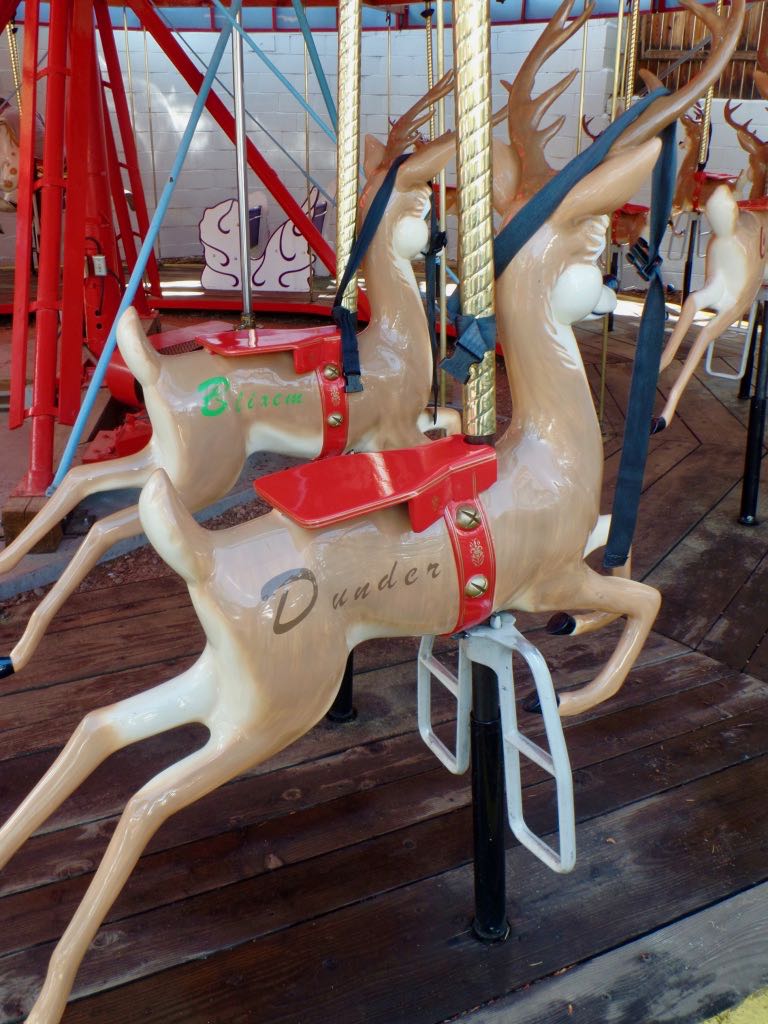 And here's some of the carousel! Each of the reindeer gets their name printed on their side. The carousel is a Hershell-Spillman, not a Golden Age of Carousel-Carving antique, although it is a mechanism made from the 40s through ... well, whenever in the 60s Santa's Workshop got their carousel so it's Old If Not Quite Antique there.