You'll find that it's stranger than known

I finally got a hint of what we were doing by seeing a logo for ``Roger That!'' And remembered that

bunny_hugger, fresh off seeing the movie Apollo 13 for the first time, had asked if I knew Roger Chaffee was from Grand Rapids? I did not, although guess who the planetarium there is named for. And in some small talk she asked which astronauts I've seen, like, in person. My most exciting connection is a chat with Harrison Schmitt, Apollo 17, working out that a picture in this one Peanuts book was certainly not him, and was probably from Apollo 15, but that he autographed anyway.

``Roger That!'' is a four-year-old science-outreach program of the Grand Rapids Public Museum. It's held in mid-February, to match Roger Chaffee's birthday of the 15th, so we were there on his actual birthday. The talk we were there for: Astronaut Story Musgrave Presents: From Farm Kid to Trauma Surgeon to Rocketman and Way Beyond. We settled into the lecture hall early, getting second-row seats (the first row was reserved) and wondering just how full it would get. It turns out only about half full, even though the event was ``sold out'', a hazard of tickets that are free but request reservation. If we made any mistake it was that we sat on the right side of the stage; the people organizing this, and Musgrave himself, hung around the left side, where the podium was, and Musgrave walked around the seats there chatting and looking back up and all that. This is just as well: I am a bad small talker at the best of times and could not possibly think of anything non-embarrassing to say in the circumstance. That Peanuts book thing with Harrison Schmitt I had weeks to prepare for.

We did watch in the row with us a family with three kids, all of whom had sketchpads and all of whom were drawing ... something or other. An empty stage doesn't seem like much of an artistic subject, but

bunny_hugger was impressed by the parents encouraging that creativity. I'm impressed they had the courage to draw like that in public; I'd be far too bashful to try.

Musgrave's title for his talk likely gave you some idea what it was about. He took his hour --- he was careful to check on the time, and several times remarked on whether he would finish by the designated hour of 12:11, after they started ten minutes late ``because of the traffic'' --- to describe his life. It's been a lot of life. Musgrave belongs to that class of astronauts who didn't particularly think about going to space as a child. They just kept doing a lot of things and eventually this set him on a rocket. So he had a lot of adventures. Including a lot of college experiences. Musgrave's credited with six academic degrees (a BS, an MBA, a BA, an MD, an MS, and an MA), and his talk gave the impression he would just feel a little restless one weekend so he'd drive to a small town, ask where the nearest college was, and ask if they have any application blanks on hand.

I have cultivated the habit, if I must give a Powerpoint-style presentation, to put a slide up and leave it up for a good minute or so. Musgrave has different habits. He put up and advanced through slides fast enough to be exhausting. Well, anyone's life will be confusing if reduced to one hour's talk, but especially so when there are things that were done simultaneously but have to be presented in some particular order. For example, Musgrave did a lot of work as trauma surgeon while he was part of the 1967 group of NASA astronauts. He didn't mention this was the group that named itself the ``Excess Eleven'', so-called because their first day Director of Flight Crew Operations Deke Slayton warned them there were no flight spots available for them for the foreseeable future. Without that knowledge it kind of seems like he wondered, oh, I don't know, will I pop over to Skylab this weekend or pick up a couple hours at the emergency room?

This was all a very funny talk, as you might expect if you've seen Musgrave on a TV show. Quite lighthearted, as well. Now and then a theme tried to intrude, of some vague thoughts about preparing yourself for how you're going to make your mark in the world. It never quite got to being a motivational speech, but there were a couple slides where I felt like he was going that way. But it's hard to come up with a grand lesson about a kid who worked out how to get a college education paid for by the GI Bill and a wrestling scholarship and being in the Reserves and a side hustle doing mechanic work was preparing himself to fly into space on all five space shuttles. I can make one out: his attestation of himself is that he worked very hard to be really good at a great diversity of things, so that when some extraordinary opportunities were available, he was the best candidate for them. It didn't quite get there, though.

bunny_hugger told me how she had thought about buying one of Musgrave's books --- which he had mentioned included one that's pictures of the T-38 planes astronauts fly, many of which happen by wild coincidence to include the space shuttle in frame --- so that he could autograph it. But she had read up on it and learned that Musgrave doesn't do autographs much anymore, as they're too often just put right up on eBay. You know how it is; the marketization of everything has wrecked every hobby. And then at the end of the talk they announced he would be signing autographs just outside.

I'm surprised that only perhaps a quarter of the people at the lecture stuck around for an autograph. The line formed outside, more or less following this set of moonwalker footprints placed on the carpet and mostly meant to lead to the Roger Chaffee display. There was enough ambiguity in the line placement that we ended up behind a group of people who were just standing there, talking, for a couple minutes before they noticed we were behind them. All right.

Musgrave had eight-by-tens of old NASA publicity photos; the one we got was of his first spaceflight, on Challenger, STS-6. He autographed it to both of us.

bunny_hugger mentioned how going to this talk, which was great, was her Valentine's Day gift to me. I agreed, and that I liked it ... and that my gift to her was a T-shirt. It was the new red Silverball Museum t-shirt that I'd secretly picked up when I was back in New Jersey in January. She was wearing it, part of the subterfuge that tricked me into coming here. I cannot guess what Musgrave thought of these revelations.

Trivia: On the 19th of February, 1903, a Harrisburg newspaper reported on Milton Hershey buying ``all the land bordering Spring Creek, from its source until it empties into Swatara Creek'', the spot which would become the town of Hershey. Source: Hershey: Milton S Hershey's Extraordinary Life of Wealth, Empire, and Utopian Dreams, Michael D'Antonio.

PS: Reading the Comics, February 11, 2020: Symbols Edition, which turned out to feature more of me thinking about my elementary school experiences than usual. 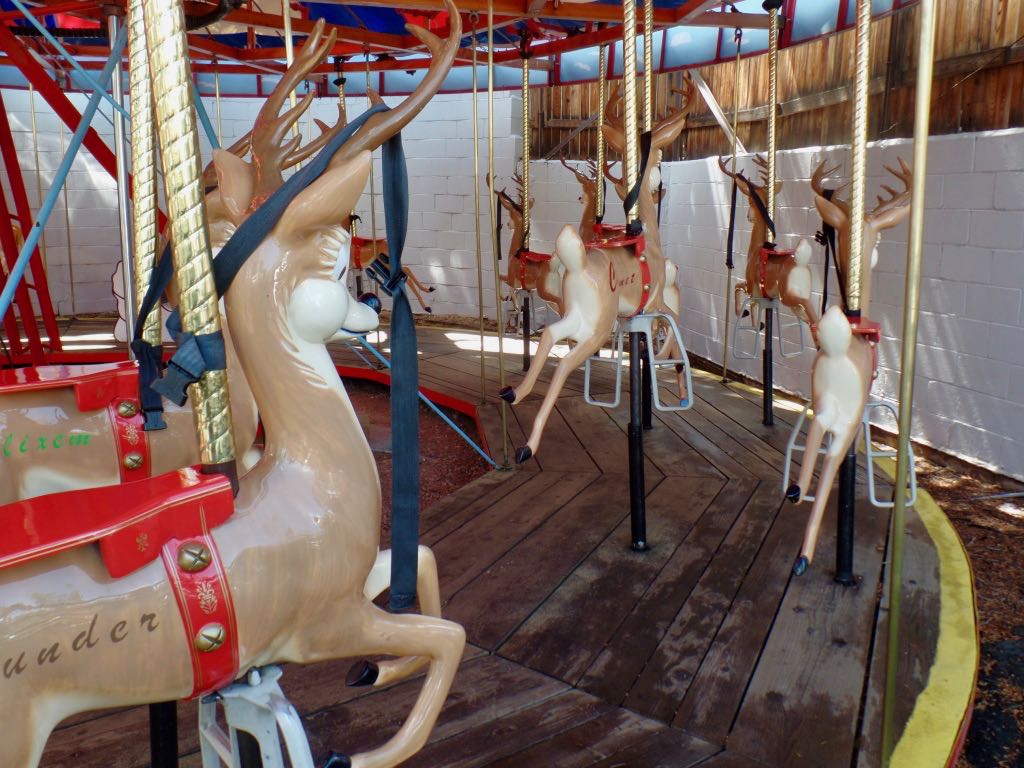 Some more of the reindeer on the Santa's Workshop carousel. 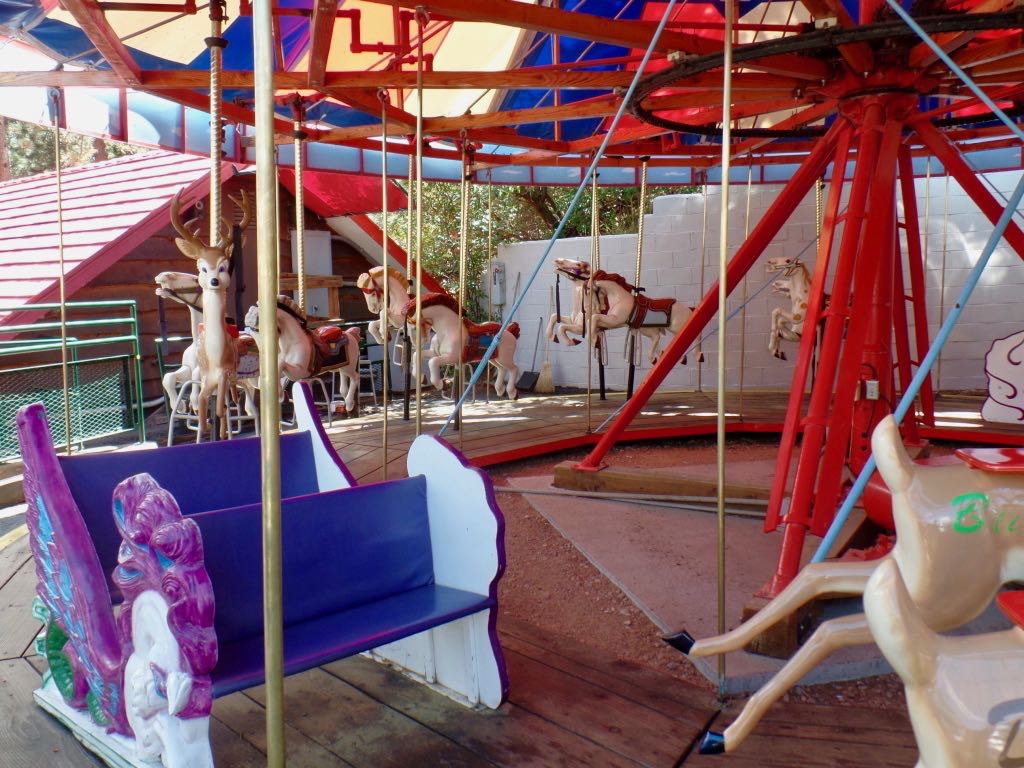 There are not only reindeer on the carousel. It has two chariots, naturally, an a couple of regular horses. 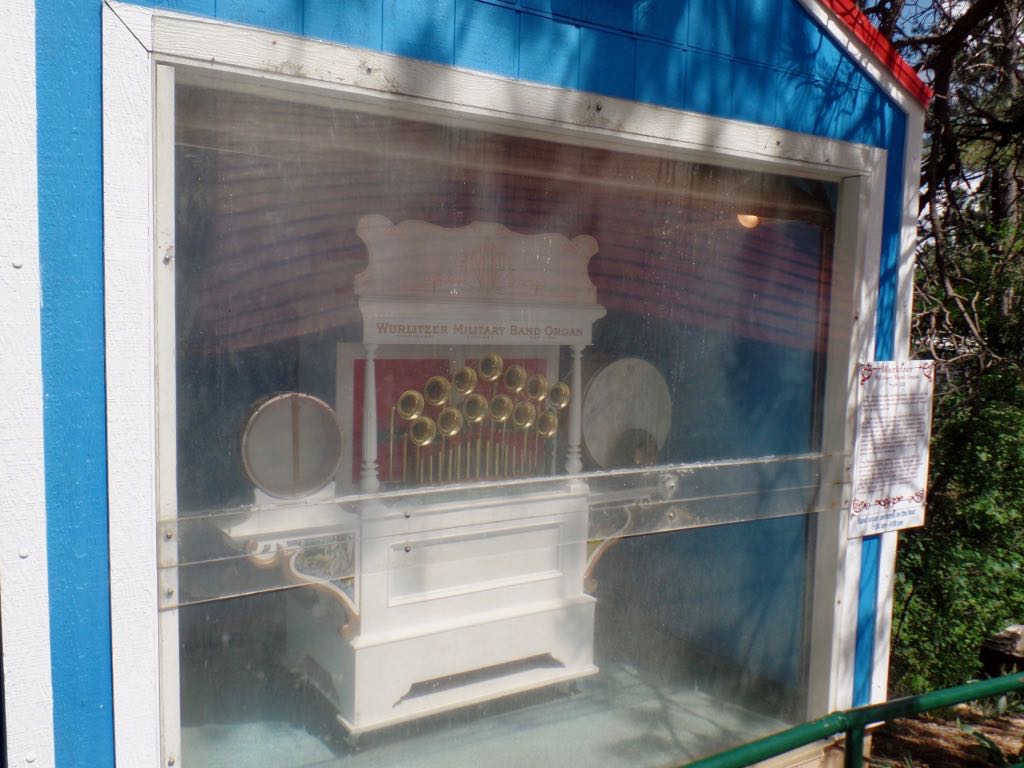 And here's one of the park's band organs, opposite the sidewalk from the carousel.