Love survives beyond our lives

Sad news from my parents. Their cat has died.

It was sudden, and unexpected to me, but not so much to them. The cat had had a cancer scare last year, a tumor that was removed fairly easily and left her, for a while, forced to wear a cone or be scolded for licking her scar. I had thought that everything was fine after that, and when

bunny_hugger and I visited my parents in January, the cat seemed in good shape. Maybe a little slower than she used to be, but who is not?

So apparently the tumor was more dangerous than I had understood. Or the surgery took more out of her than I'd realized. Maybe more than my parents had, too; as my father described it, they had woken up to find that she'd died, in the night.

It had happened several weeks ago, during a stretch that interrupted my routine weekly calls, as I missed them or got them at a bad moment or whatnot. My father mentioned it as casual old news.

This is the fourth cat they've had, and the last of the barn kittens that my sister had given to them. In fact, this cat I had brought from the barn where my sister then worked to my parents, coming home with me after a Christmas party that I had been invited to.

It's another sad thought about the passing of time, as though there were any happy thoughts about the passing of time. But here is another sad thought: my parents don't figure to get another cat. Not just because my sister lives a little farther away and it would take a little more effort to deliver a cat who didn't really belong in a barn. This cat was just over twelve years old when she died, and this felt abbreviated. There is something implied in the decision that they will not have another pet.

My parents are still in good health, so far as they have let on. And there's no reason to think otherwise. But where might they be, and in what state, for the next twelve years?

It's a hard thing to look at honestly, so I now look away and pet a rabbit of unknown age and parentage and history, but who acts young and still overflowing with life.

Trivia: In 1946 the Monopoly Guy was given a name --- Rich Uncle Pennybags --- for his appearance in the stock market game Rich Uncle. Source: The Game Makers: The Story Of Parker Brothers From Tiddledy Winks To Trivial Pursuit, Philip E Orbanes.

Currently Reading: Fontaine Fox's Toonerville Trolley, Editors Herb Galewitz, Don Winslow. So the strip, being ``slices of life'' from the days when you could have a hick trolley line running through lots of vacant lots to the town railroad station, and discontinued in 1955 when the last vestiges of the world it depicted of one-room schoolhouses and spinster librarians and the Foighten' Oirish Kid and general stores with checkers matches were forgotten, is of course quite dated in its trappings. And yet somehow it's more current than this line from its 1972 introductory matter: ``Remember tomboys, when that word was used without reference to a sexual abberation?'' Mr Galewitz, if you wish to make remarks like that I invite you to step into this door and knock yourself further senseless.

PS: Here's a couple of things at Santa's Workshop. 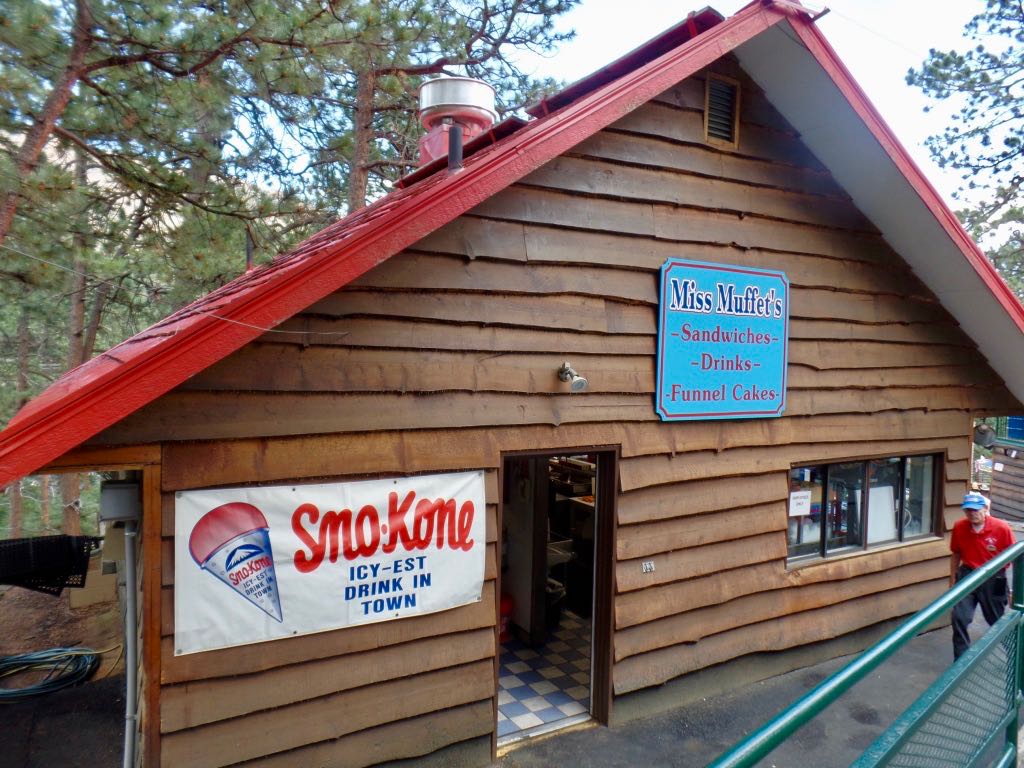 One of the refreshment stands. The place being named Miss Muffet's is kind of a concession to there not really being an inherently Santa-y food place name. 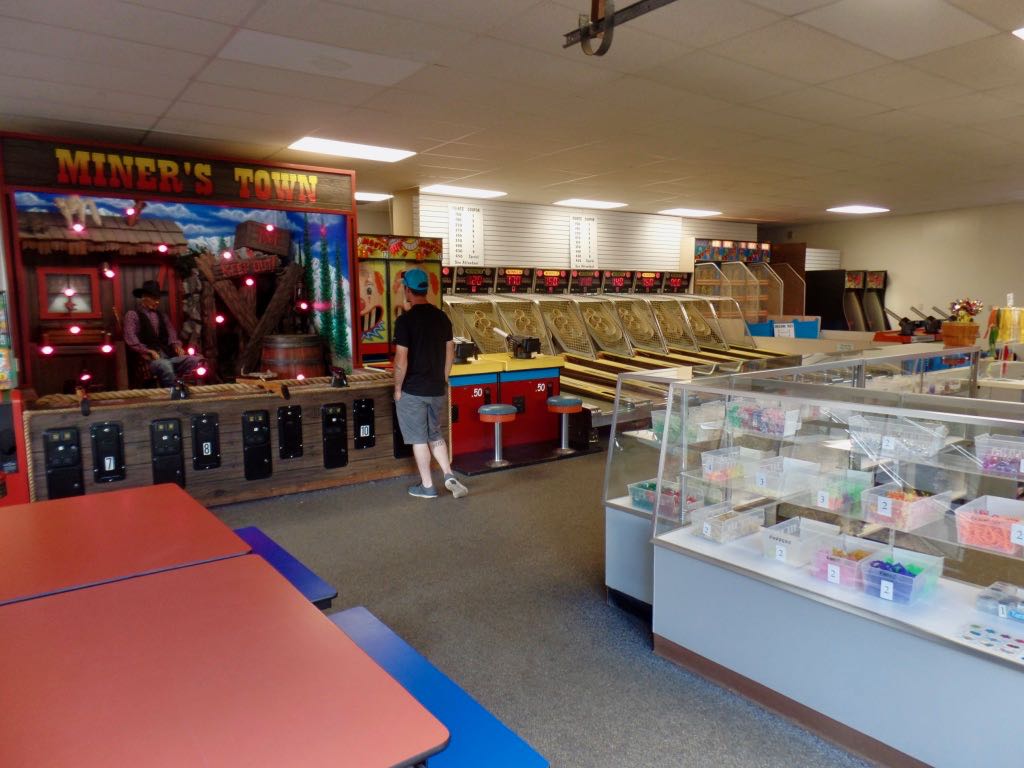 The Skee-ball arcade, and some of the games around that. There was no pinball. 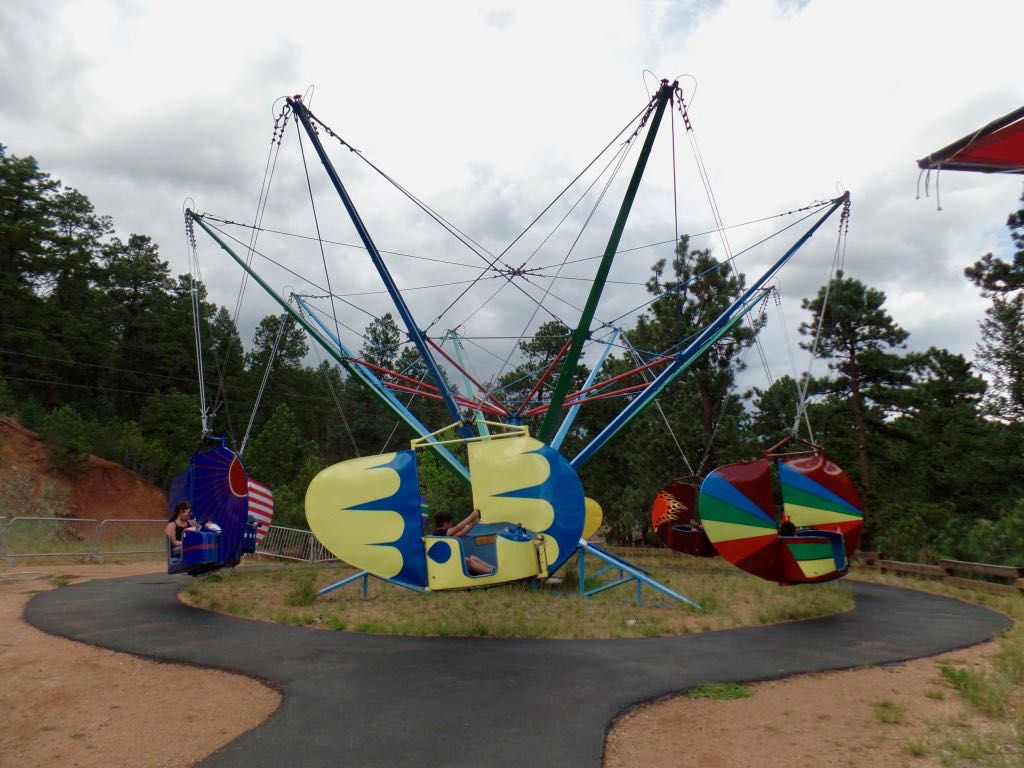 A flying scooters ride that looks like it's of the old generation. The ride type's gotten a revival in the 2010s but the center mechanism looks different.