When the curtain falls to end the show

And then more shocking news. This I got from e-mail from

bunny_hugger while she was at work Tuesday. This is only about amusement parks, nothing as serious or intimate as pets or anything.

But Apex Parks Group announced the closing of two parks, this after the search to find a buyer failed. The parks are ones that I've been to once each: Indiana Beach, in Monticello, Indiana, and Fantasy Island, in Grand Island, New York. All of the rides the parks have are listed up for sale; in fact, that news item was the first bit of alarming news to come up about them.

There's a lot of surprise to the bad news there. First that the parks were up for sale. Second that Apex was feeling insecure enough in its finances to not just keep the parks up and running. Third that nobody wanted to buy either park. Indiana Beach had been run almost into the ground by its previous owners but, by every report, had seen a great comeback under Apex. Certainly when we went it seemed healthy enough, as far as you can tell in one visit. Fantasy Island, similarly, looked in great shape even for a day limited by rain. It's a relief we got to both at least once, but it especially hurts that Indiana Beach closed on us. It's just enough farther away than Cedar Point that we never felt like it was a good day trip, but it was doable, and maybe if we had visited more we'd have seen it as a day trip.

I imagine it's possible something will happen, and the parks find a way to open again. I don't see a logical reason why they would, but it's not like anything's been torn down --- yet --- that I know of. But if the parks weren't making enough money as places planned to open in 2020, how much more can we expect from places planned to be closed? And yet apparently the Facebook page of Fun Spot America, which runs three parks in Florida and Georgia, happened to get a comment from someone saying, you guys should buy Indiana Beach and Fantasy Island. And they happened to have a response saying someone there had a flight to Indianapolis that day. Maybe it'll be something. Maybe it'll just let roller coaster fans know Fun Spot America exists and runs these three little parks, two of which have wooden coasters.

This is not the only park closing news of the season. Clementon Park, in New Jersey, abruptly closed in late September, refusing to let patrons in for a customer appreciation day and cancelling all sales for 2020 season passes. I haven't heard of any information about what's going on and whether there's any hope of the park reopening.

And even worse, since it involved actual deaths: La Feria Chapultepec in Mexico City has been closed since October. This after something that never happens, happened: the roller coaster Quimera derailed. It killed two people and injured two more. In the accident investigation it transpired that none of the rides had been properly maintained, and the local government revoked the operation permits. Allegedly they're looking for a new operator, but I haven't heard anything to say that one's been found, or what it might take to get the park up to code. It's possible this will lose Montaña Rusa, their wooden Möbius-strip roller coaster and one of only three like it in the world.

So. I don't know just what's going on here. But this seems abnormally grim a year for amusement parks. I don't think it's just that these were four parks I knew in person; the concentration of closing news seems like a lot. I suppose the La Feria news could have hit anytime, but all the other park closings feel to me like the leading edge of a serious crisis. May it only be one of amusement parks.

As for us? Well, this makes a much higher priority of our getting to Camden Park, in West Virginia. This has been a place we've wanted to get to for each of the last several years, and we've been trying to find some way to piggyback it with any other parks to be less of a long ride for one roller coaster. (Well, one marquee roller coaster; the park has others, plus, of course, a whole park.) Now, we're probably going to just accept we're going to have to drive the long way there and experience the park while it's still with us, even if the ride can't do further duty. Also, Conneaut Lake Park, which has somehow been doing all right without us, becomes a high-priority visit. I'm also considering whether, if work summons me back to New Jersey during the season, going to any small parks available even if I can't go with

Trivia: Ranger 6, which crashed into the Moon (as designed) without the television camera ever turning on, was the twelfth successive American lunar flight failure. Source: Lunar Impact: The NASA History of Project Ranger, R Cargil Hall. SP-4210.

Currently Reading: Fontaine Fox's Toonerville Trolley, Editors Herb Galewitz, Don Winslow. So now that I've finally read the whole book, do I like it? ... And yes, I do, and found it mostly funny, although I'm not sure I can say why. It's all panel jokes, few of them forming stories (although the strips are presented out of chronological order, bunching together instead by who the star of the day's strip is, and only the occasional reference lets you guess when anything came out), each built around here's the featured character and his or her One Big Thing. Like, having a short temper. Or being incredibly fat. Or having quite long arms. But the jokes are reliably tied into everyone's big named trait, and often fairly ingeniously, and that way, they land. It's a weird experience, really. 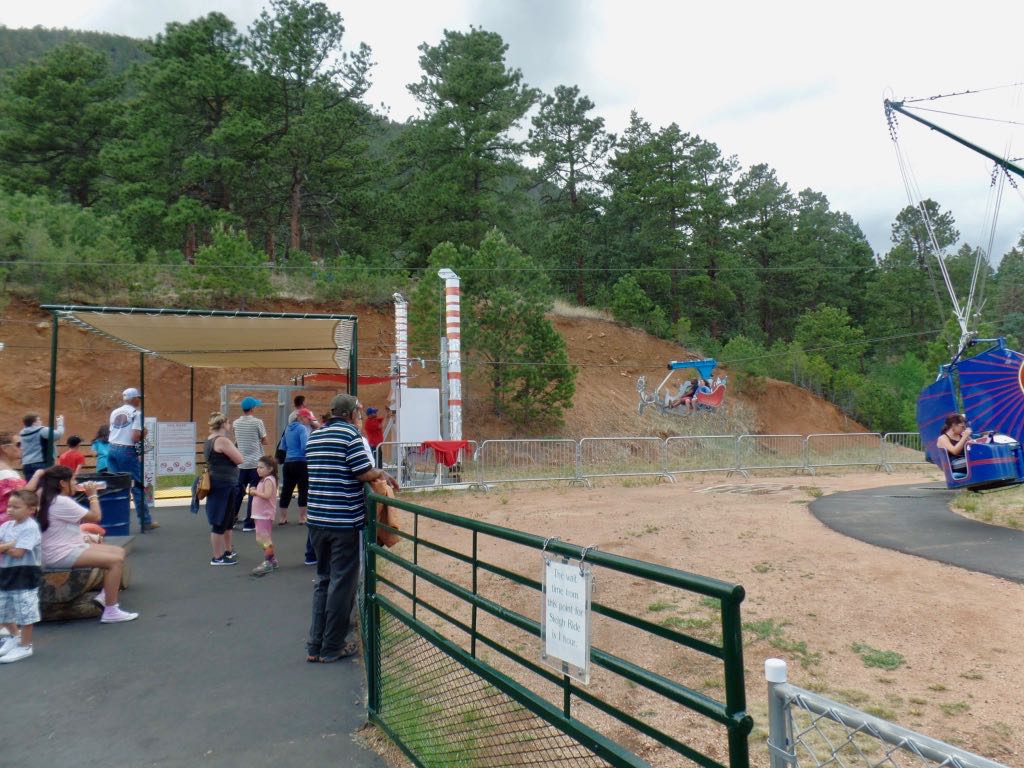 Beside the flying scooters ride is the queue for the Sleigh Ride, a zipline ride that we did not get on. Note that the sign implies this queue would have been the better part of an hour for the ride and we're not that delighted by the idea of a zipline ride anyway. 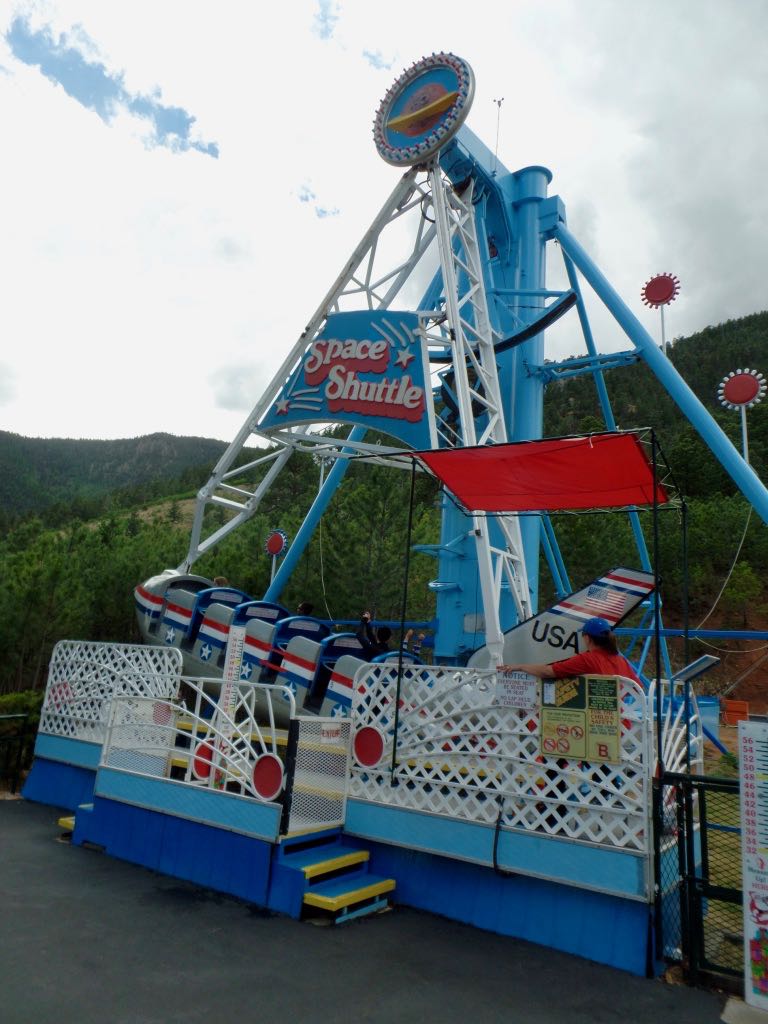 A treat from the 80s: a Space Shuttle-themed rocking ship ride; they used to have one much like this in Great Adventure, although it wasn't painted in Air Force livery like that. It's so weird that a space-themed ride in a park near Colorado Springs would go so Air Force crazy like this, isn't it? 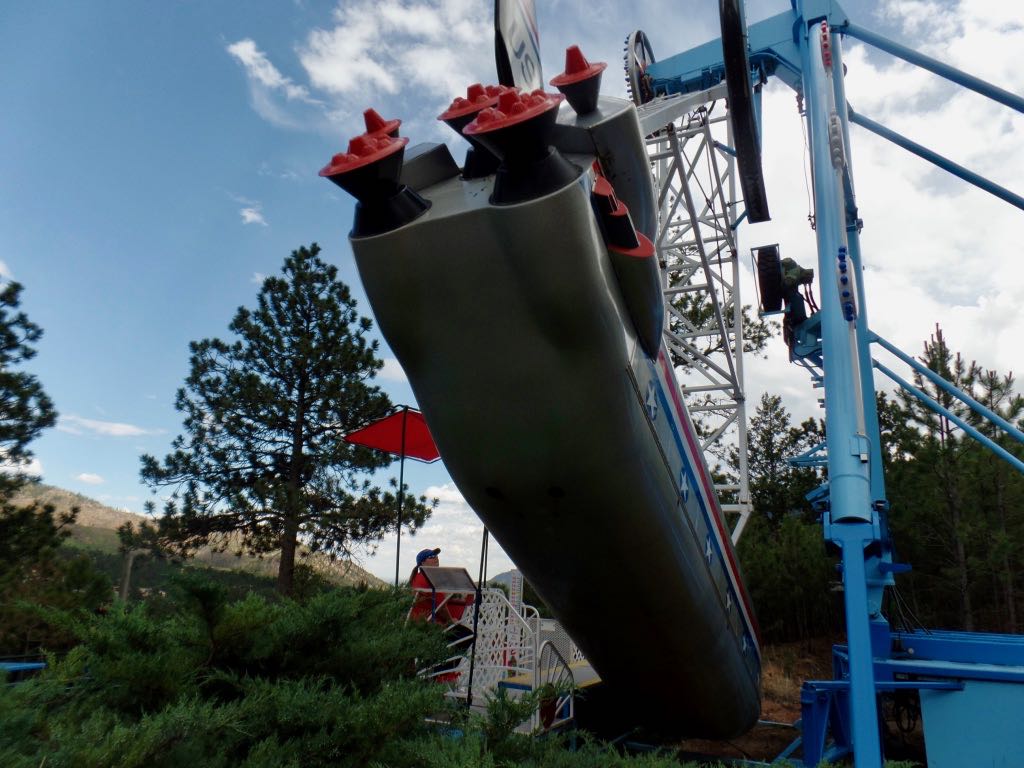 Looking up at the Space Shuttle ride in its flight.