Hey, I did two non-comics posts in a row on my mathematics blog! It's almost like I'm getting my energy back together for writing it. Published in the past week have been pieces including:

I do story comics too. What's Going On In Gasoline Alley? Did Baleen leave Gasoline Alley or what? December 2019 - February 2020 in plot recap.

And back to Denver! We were done with our last amusement park expedition for the weekend, on a day that turned out to be colder and rainier than we had thought possible. So what did we do with the large swath of afternoon and evening left? 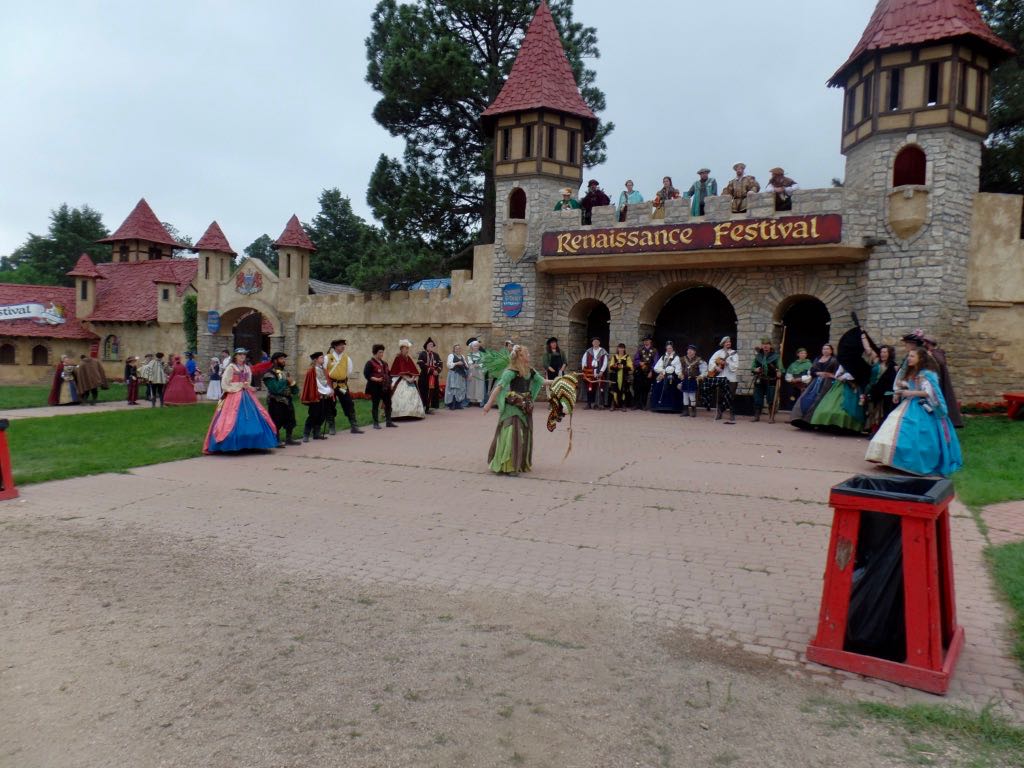 So, a person I knew in Denver was not going to be able to meet up with us for anything, because he was working at the Renaissance Festival all weekend while we were visiting. Fortunately, the Renaissance Festival is in this town just off the highway between Santa's Workshop and Denver. So we were going to be passing about when their Sunday performances would be done, and we had plans to meet up and at least say hi then. With various things, including heavy traffic, we got to the closing events late, as the cast was finishing their songs and bidding everyone farewell. 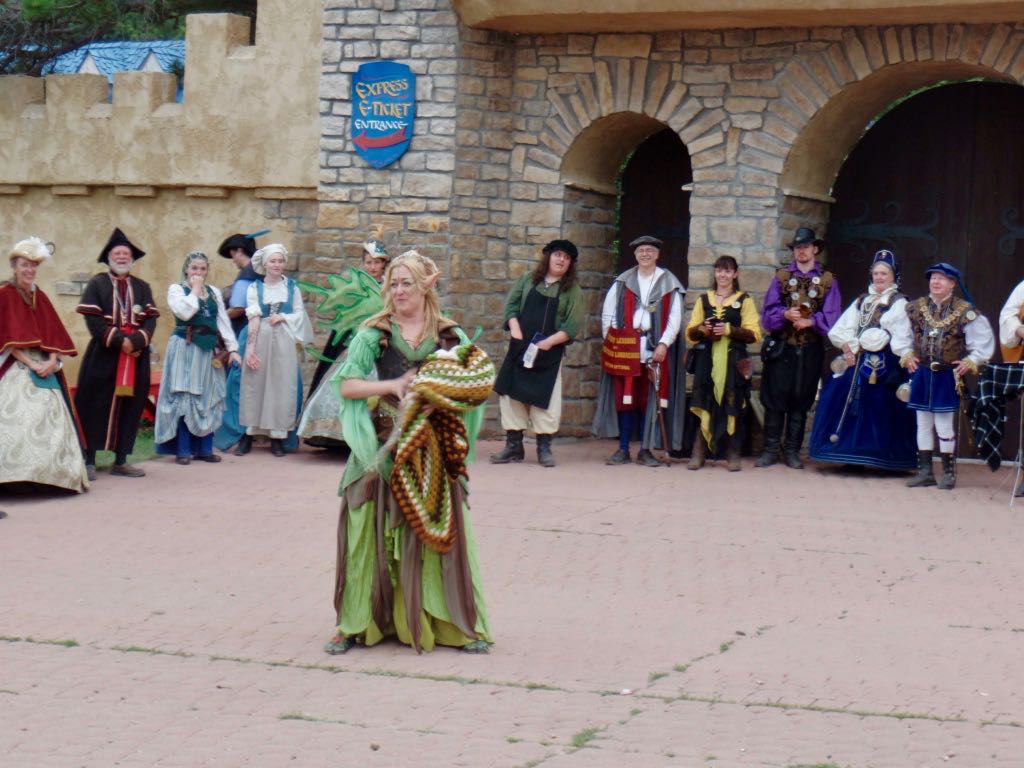 Host wishing everyone well, while I scan the performers and try to figure out if I'm certain exactly which person I should be looking for because you know how it is meeting people you've known online for the first time. 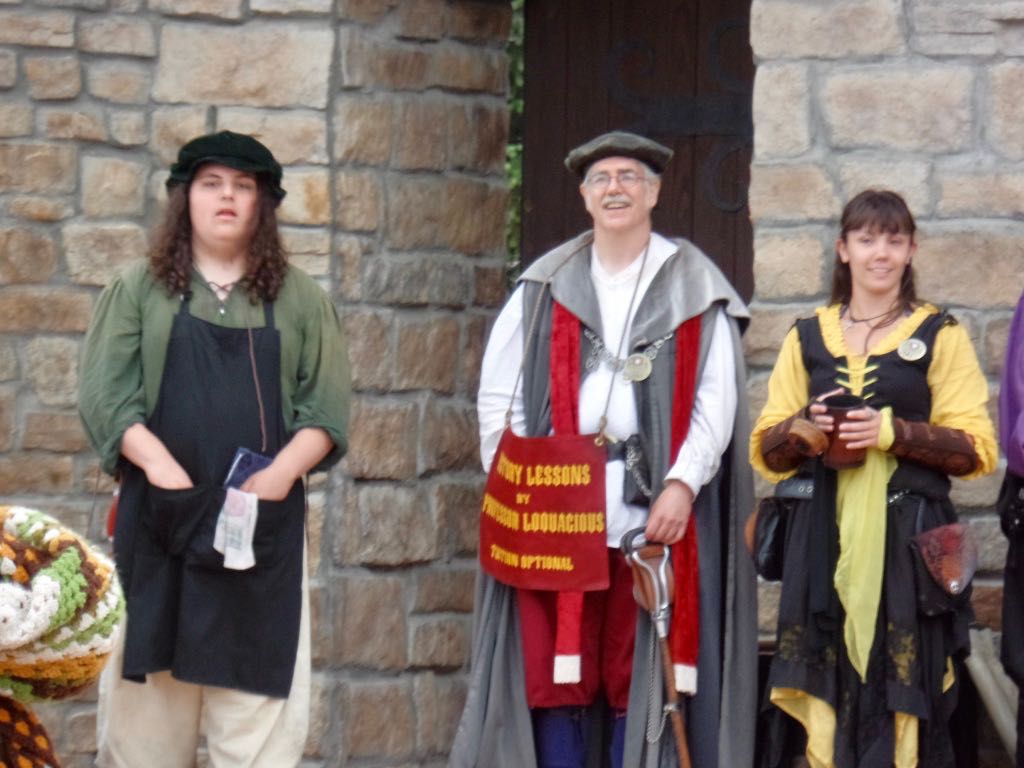 Performers getting ready for their final bow. So, part of the trouble is I did not know when would be acceptable to go up to and bother the performers; they just started going back into the Renaissance Village. 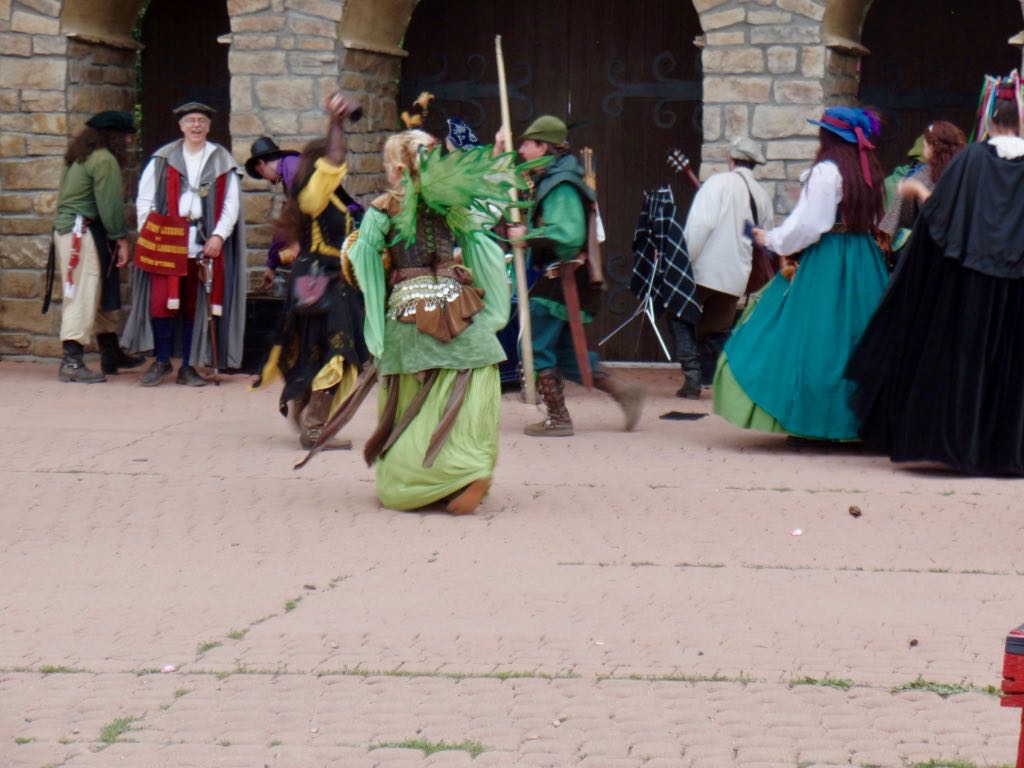 So we failed to, like, organize a specific time and place to meet, figuring that we would meet up after the close of the day. I had thought my friend had recognized me and made clear eye contact and that he'd be right back out just as soon as he had taken care of putting props safely away. 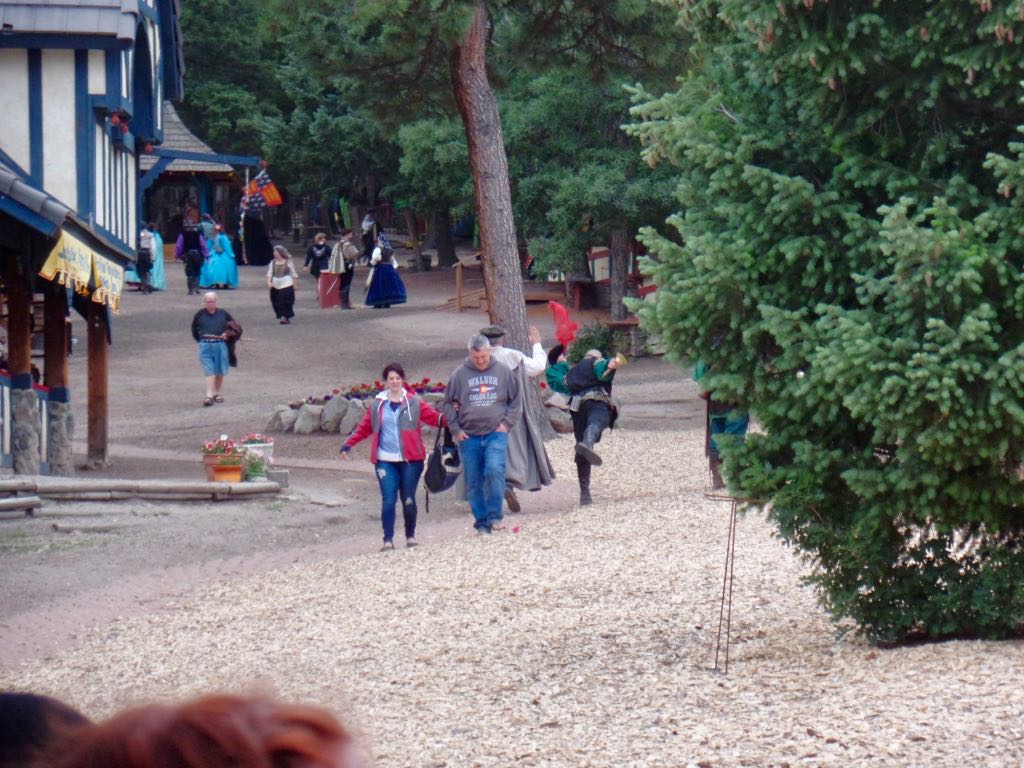 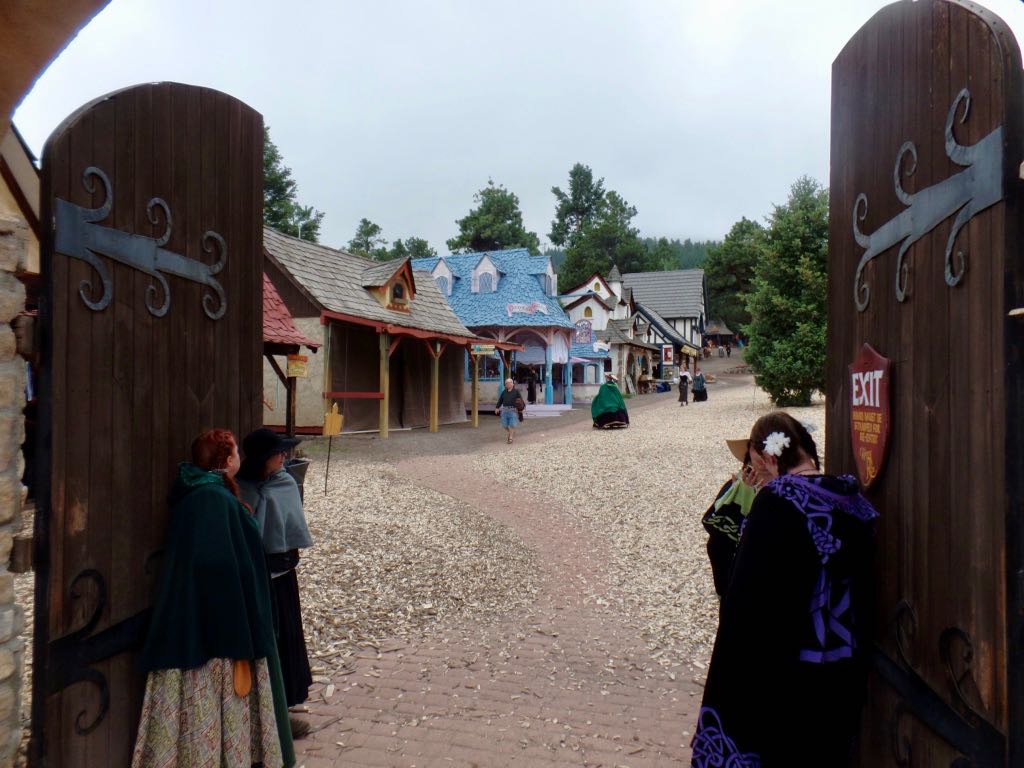 Also was mistaken in thinking he'd be right back out, then. What I should have done was ask people at the gate about him (I know his RL name, as well as his festival stage name) but I felt too shy to do such a thing, so, we stood a long while in the cold and never did meet up. 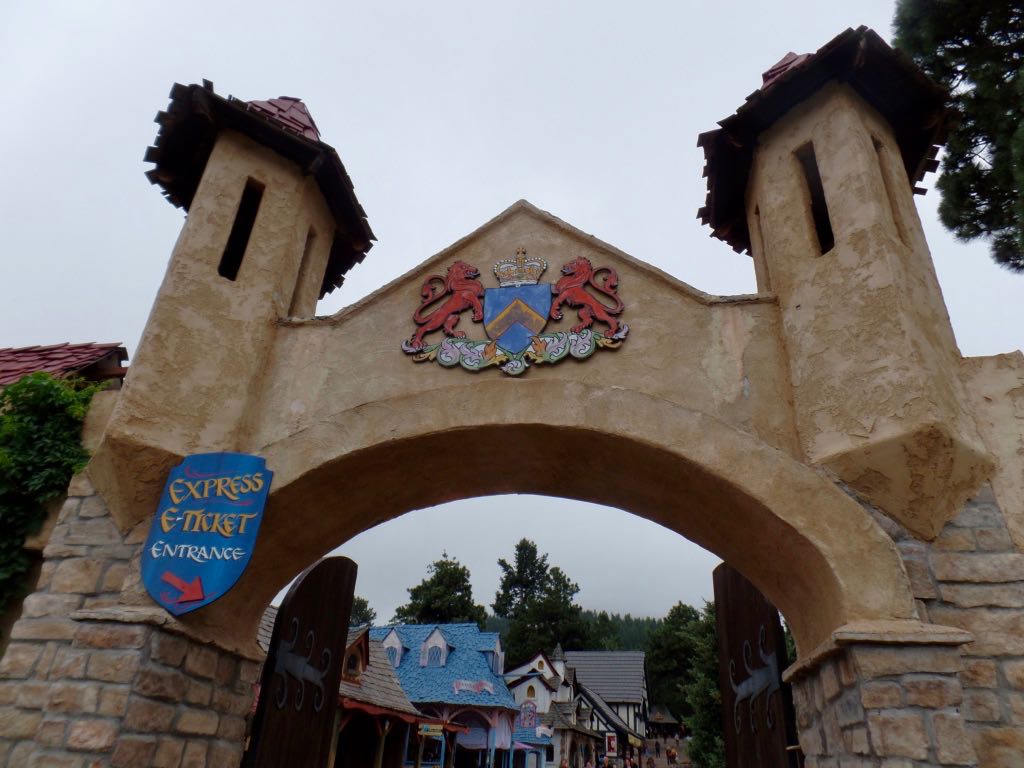 Front gate to the Colorado Renaissance Village; it certainly looks impressive. Also, they totally missed a bet by not calling it the Ye-Ticket Entrance. 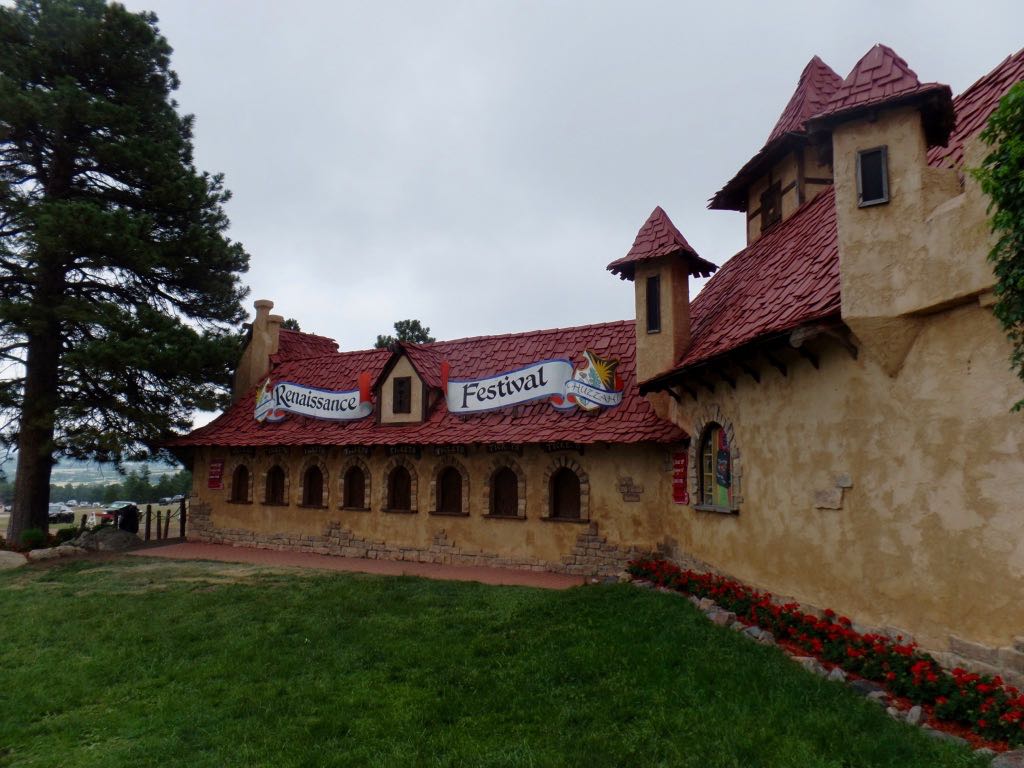 Outer walls of the village, as I continued to wait. Later that day my friend expressed his disappointment that I hadn't got there and I sent him a bunch of pictures proving that I had. 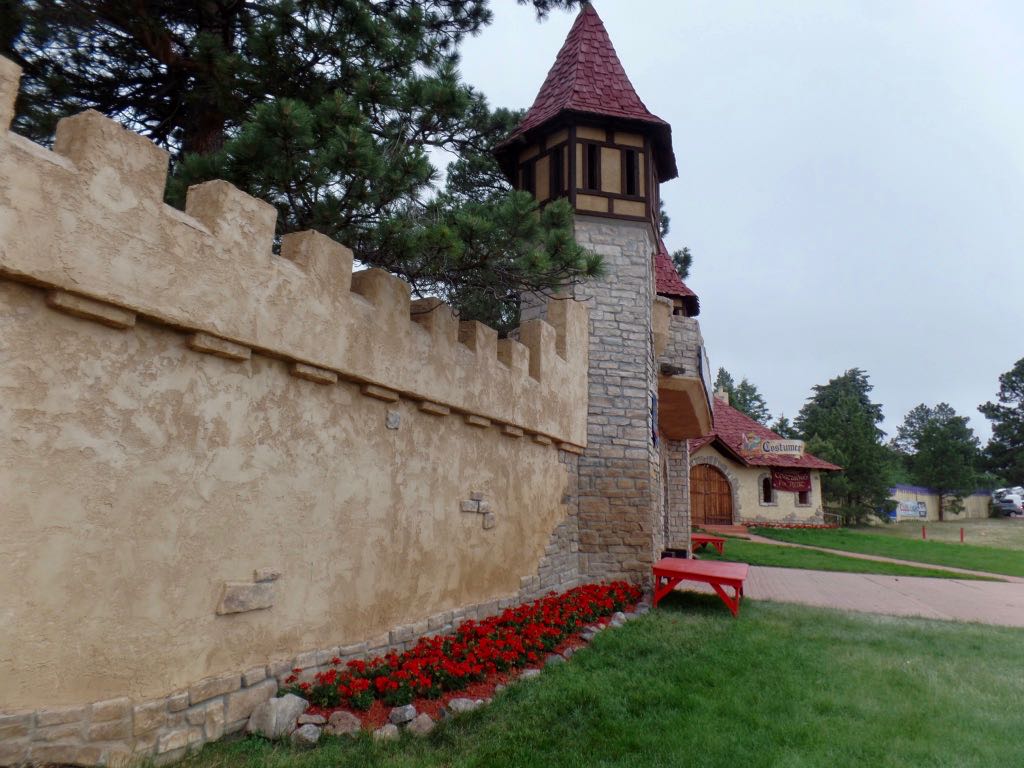 And more of the gate of the Colorado Renaissance village. There's bathrooms somewhere behind one of these walls. 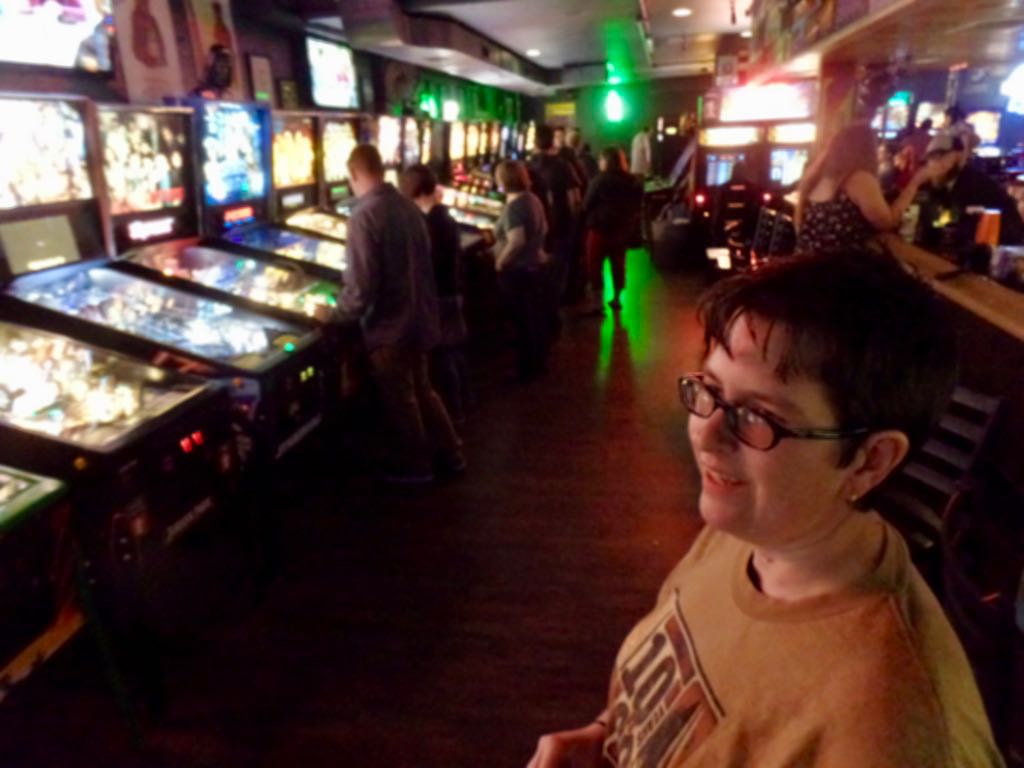 So we got back to Denver, in the pouring rain, so there was no making a night trip to Lakeside Amusement Park. Instead we went to the 1up Arcade, a hipster bar with a lot of pinball that's a center for Colorado's pinball scene. Had we stayed one more day --- and really, we should have --- we'd have been able to drop in on a tournament there. 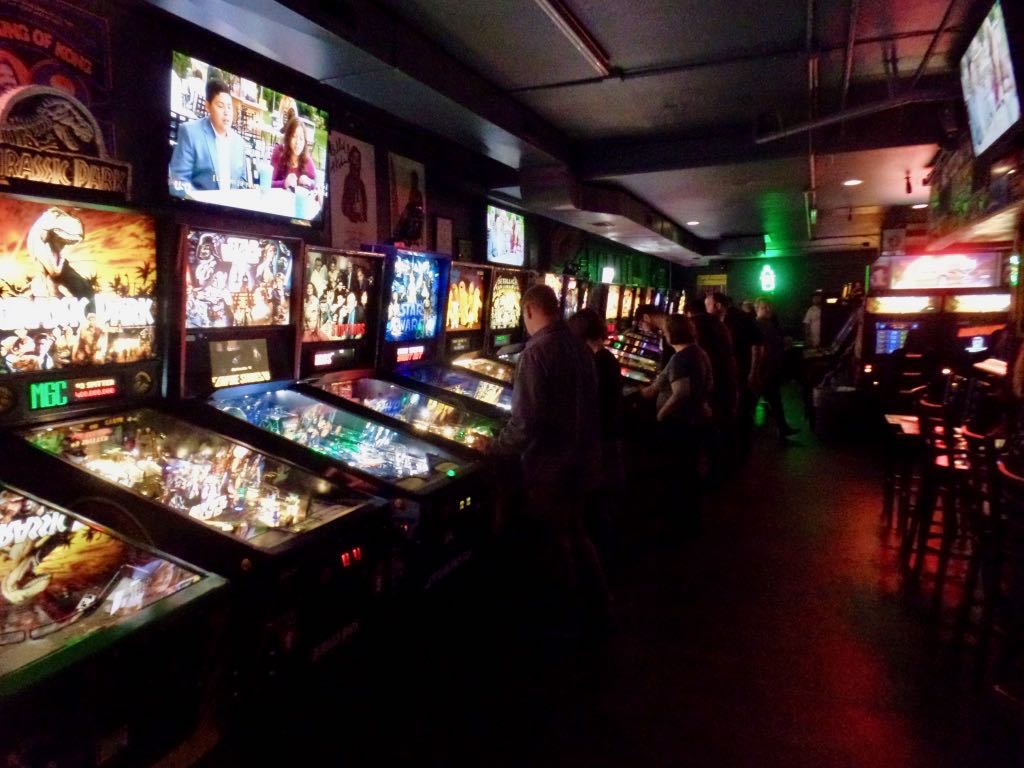 Row of pinball games at the 1up arcade; you can see there's at least two of the estimated seven different Star Wars-themed games on that row. Also the 1990s Jurassic Park; we visited before there was a new Jurassic Park game. 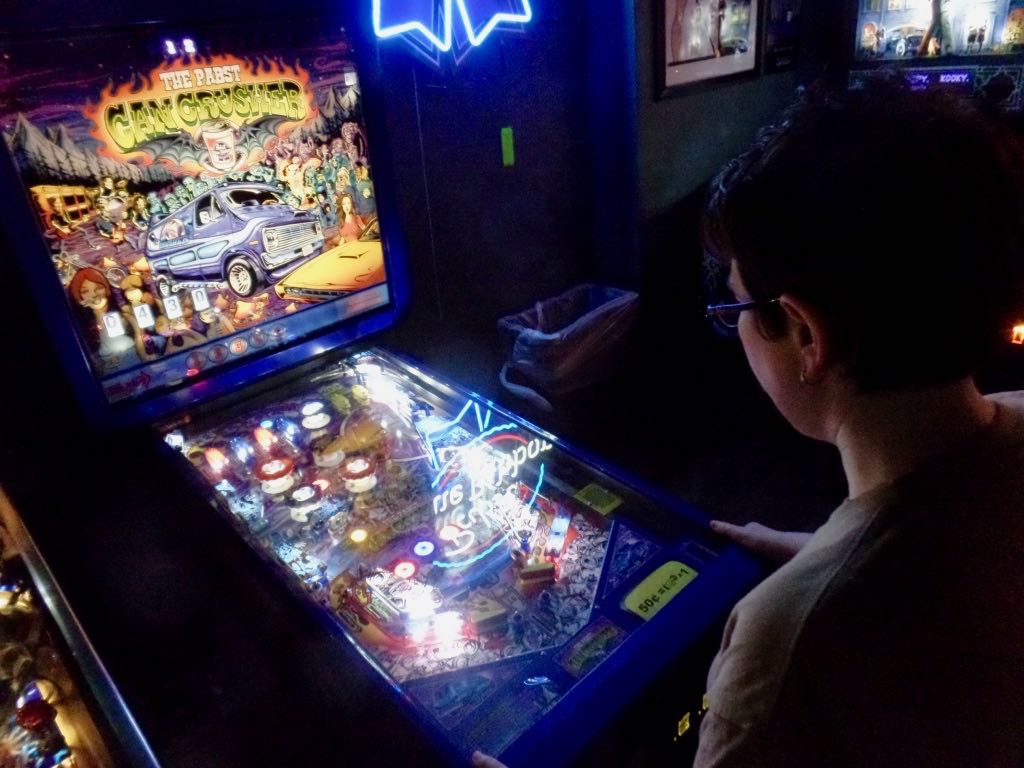 bunny_hugger getting in a game on Pabst Can Crusher. This beer-themed game is actually the same table as Whoa Nellie: Big Juicy Melons, but with new art and we assume sounds (we couldn't hear anything distinct). The theme is shifted from breasts to ``van party in the woods'' and we like this game about a kajillion times better.

Trivia: Three hundred of the space shuttle Columbia's thermal tiles had to be removed, refurbished, and replaced after a nitrogen tetroxide leak that delayed its second flight a month. Source: The Astronaut Maker: How One Mysterious Engineer Ran Human Spaceflight For A Generation, Michael Cassutt.