Saturday, besides being our relationship anniversary (observed; it's not like these things have a real definable moment), was a Fremont pinball day. Two tournaments; next month, it goes up to three. As with last month, the new formats have everyone play two slates of four games each, and, alas, only the top half of finishers on each of the games gets to play for the A Division finals. You know, where the real points are.

Unlike January's, though, more than half of all the people who entered scores showed up to the event. There were people shut out. In the first tournament,

bunny_hugger was one of these unfortunates. There was a consolation, literally a consolation tournament: the three people in ``B'' were to play each other in a ladder tournament for the chance to win a free entry to the venue next month. Ladder is a format disfavored by the current ratings scheme for International Flipper Pinball Association points; you play a string of games, with the lowest-scoring person eliminated from each. MSS, who surprised everyone by not making it into A, won this.

Ah, but I was in main! And swiftly shooed out of main. We had mere three-game rounds. In the first, against PH and MKS, we played Baywatch. It's actually a pretty fun game, even though it's one of the handful of games Sega made in the 90s, most of which are kind of ... eh. I have only a vague idea how to play Baywatch, but that's all right, because I can usually get 250 to 500 million and that's a solid score. Either would have won this game, but I had an appalling time, coming in last. I would need at least one first-place finish to have a chance of moving on, and I had the pick of the next game. So I picked one of my specialties, X-Men. For some unaccountable reason, I am very good on this game. And nobody else is. First ball I put up 22 million points, normally enough to win; PH and MKS put up nothing. Second ball I flop on, but even though MKS rallies, she gets only to half my score. And I have a multiball ready to go ball three. Which ... I flop on; my second and third balls I do nothing. MKS continues her rally, topping me. PH doesn't quite beat that, but it's close. And with scores that I would have beaten, had I gotten that multiball started.

As I watched MKS topping me I remarked to PH, normally, this is my game. The only other one I'd feel confident on, in this group, would be Blackout --- except that the Blackout table there used to be MKS's and her husband's, and I'm not fool enough to take them to their own game. And then MKS picked Blackout for the last game of the round. My only hope to move on would be to win the game. We all put up a lousy first ball, yet, what do you know, but I'm a little touch ahead. MKS houseballs the second ball too; I have a decent but not spectacular second ball. PH, though, he has a spectacular ball. MKS flops the third ball, but that doesn't matter; she's on to the next round whatever happens. Me, I have to get serious and put together several hundred thousand points. But my pinball resolution this year is to work on the ``wood chopping'', the slow but steady accumulation of points, that make this possible. And I'm getting there, when the ball pings out. PH has won, and I'm out of the tournament.

bunny_hugger is in. But I am not: I am one too many for the half of all valid players. There are, for mysterious reasons, more people consigned to the B division this time; six people will play off for the consolation bracket. I'm the highest seed, so I'll join in only after two rounds of play. MSS, amazingly, is in the consolation bracket for this as well. And I know he can beat me.

So, my consolation objective: can I beat MSS? We'll have up to three games together, if I don't finish last, and I'll have the pick of game. Is there any that he's liable to lose on? This may seem like a petty objective on my part. But I feel like, if I'm going to be a serious competitor, I have to be thinking of how to level out differences. My first pick is Jokerz, a late solid state game; it's one I'm good at wood-chopping on, and that can play pretty rough. I suspect that MSS, a very physical player, might nudge too much and tilt his game away. He does not. So my next pick is Johnny Mnemonic, again, one of my great strengths at the venue. I have a mediocre first two balls, but MSS has an even worse time of it. One is just a bad-luck house ball that could happen to anyone; another, though, is tilted away. My third ball I put together everything, a multiball and a crazy lucrative spinner millions mode and bonus multipler that carry me to three billion points. MSS doesn't top one billion. The other player in the group rallies on his last ball too, beating out MSS.

So I make my shameful secondary goal: I figured out the game to play to knock MSS out of this ladder tournament. Not that this was saving me all that much: MSS had won the first tournament's half of things, and whoever won the second tournament's consolation would have to play him, best-of-three, for the pass for next month. So when I lost a pretty high-scoring game of Embryon, I felt, you know, so what? If winning that last match were so all-fired important I'd have picked Blue Chip or something instead.

Nevertheless: having been knocked out swiftly in one tournament and not even making it into the other, I'm less fond of this new tournament scheme in Fremont. On the other hand, it's not as flopping in Fremont tournament is a new thing to me. And next month the Fremont bounty goes up to three tournaments a month, and any of them should, for a final-four finish, be really good at getting into the state finals.

bunny_hugger was knocked out of the first round of the tournament she made, but true to her resolution to take losses with more equanimity she was a pretty good spirit about this.

On the way home, MWS, carpooling with us, talked about the prospect of his running some extra little weekly tournaments at the hipster bar in Lansing. And asking, really, if

bunny_hugger would feel her toes stepped on if he did that. She didn't mind and ... really, a couple little tournaments in Lansing like this could really help our own quest for the state championship. Done well, a first- or second-place finish could be as good as a final-four finish in Fremont, and take a lot less time for us to get there. So there may be this to look forward to in the near future. Maybe.

Boy, though, I would've rather been in the second tournament than made something out of the consolation bracket.

PS: A handful of pictures from the 1up barcade in Denver. 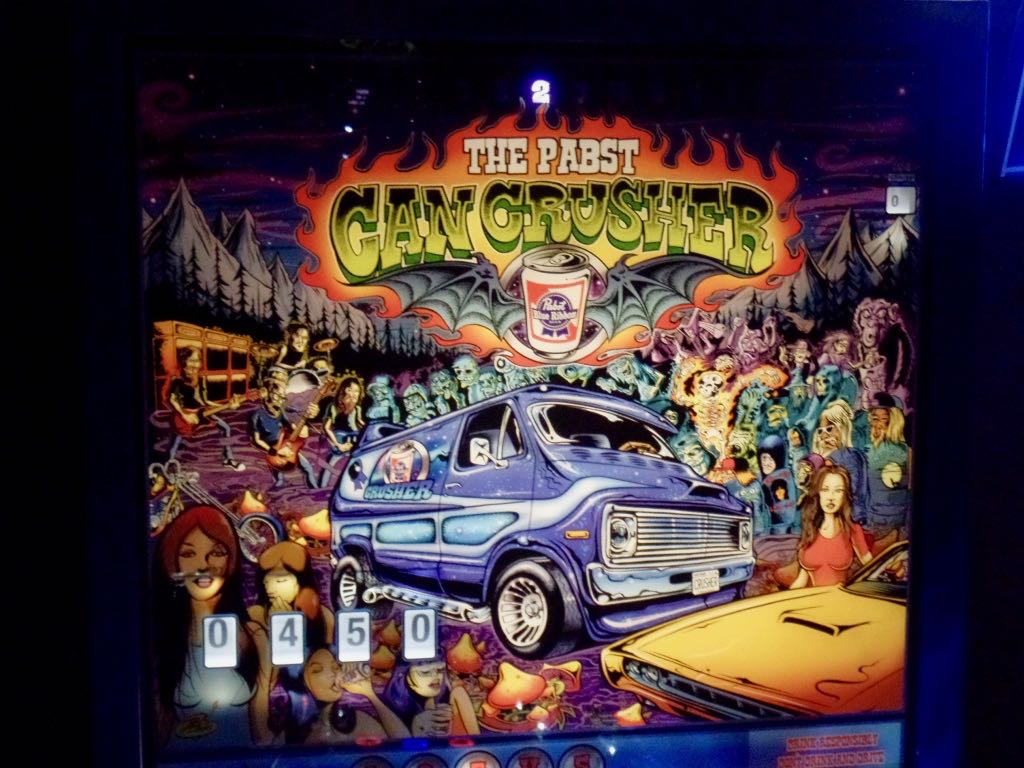 Backglass art for Pabst Can Crusher, the (first!) alternate theme to Whoa Nelly. It is very pinball art but in mostly good ways. Do you see Bigfoot there? ... Also, yeah, seriously, Pabst Blue Ribbon has a retro pinball thing going. 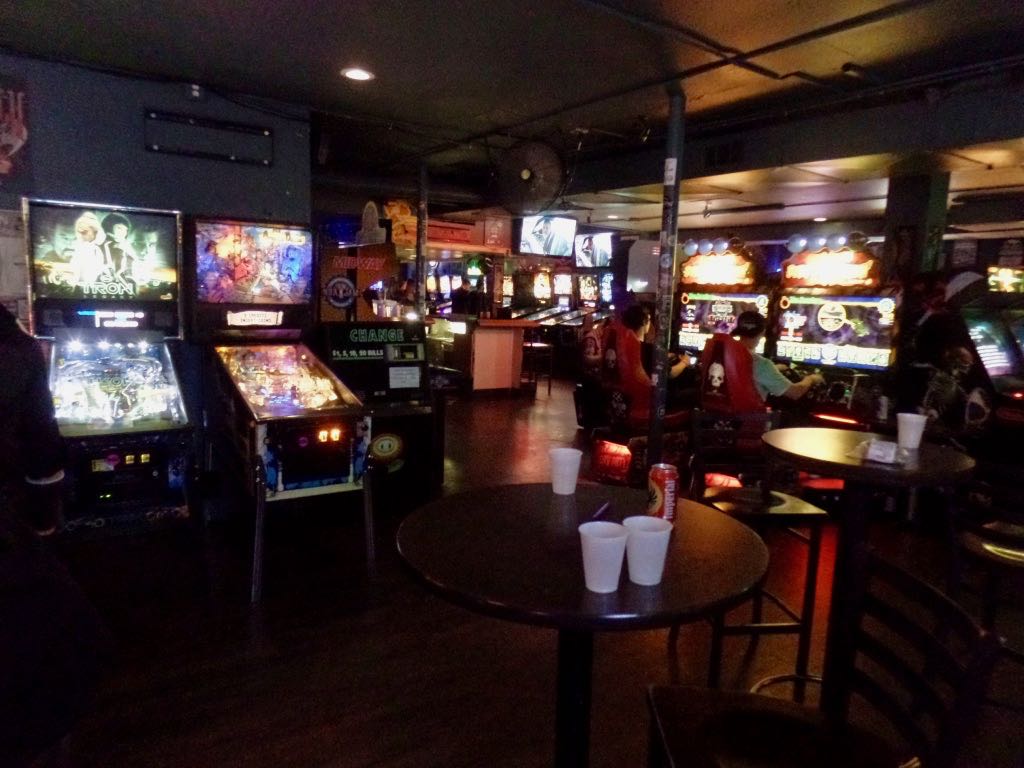 Looking out from one of the alcoves at 1up; there's a couple of video games in the pinball room. There's also a whole other room that I didn't get photographed with mostly vintage arcade games. 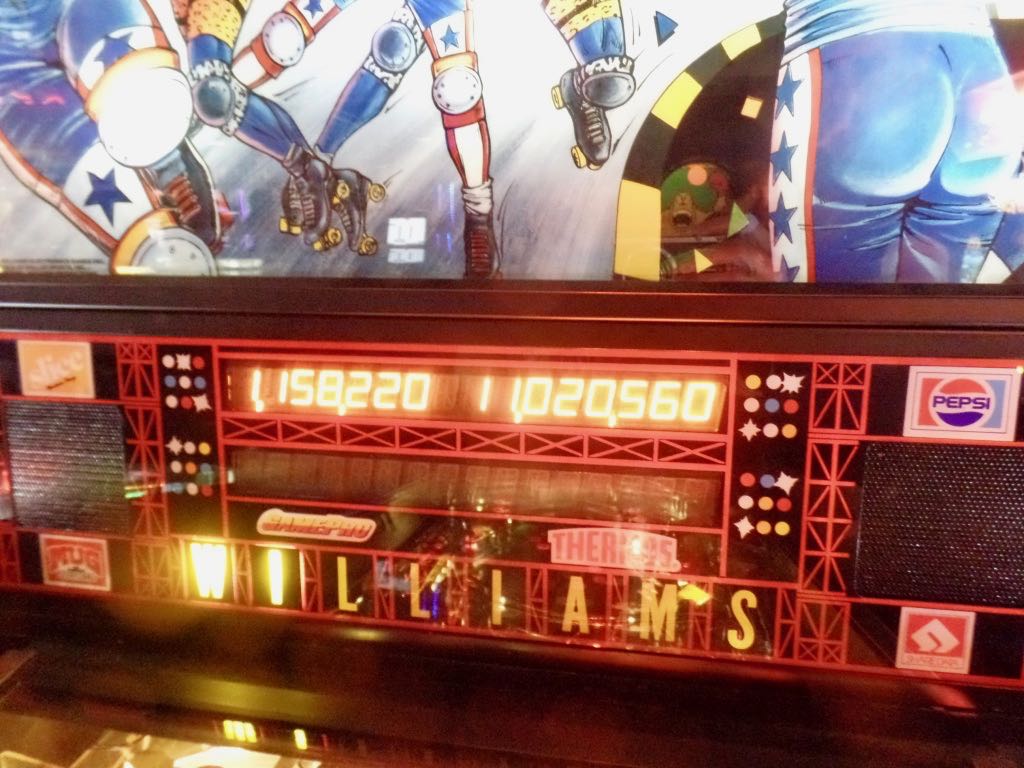 Rock rock rock and Rollergames! ... Yeah, so, we started to discover some secrets of how to play the game that's honestly kind of fun but also has the most annoying earworm of an attract mode. I think that it's

bunny_hugger who put up the better score as I think she was the one to figure out where the Wall shot was. Also, look at that late-80s sponsorship tie-in, with both Mug root beer and Slice cola.