Down came the rain and washed the spider out

Tuesday night we had a second pinball tournament, besides the conclusion of the incorrectly shortened Black Knight one. This started out as a spinoff of a tournament last year, meant for a similar worldwide leaderboard contest. People quite liked it, so why not do it again? And that's how we got the Lansing Pinball League's Royal Rumble.

As with last year's Survivor Series match it was a selfie league, you proving your scores by sending

bunny_hugger a picture of them. Also it was split across three venues, with scores enterable on six under-used games at our local hipster bar, plus three at the Pinball Pete's East Lansing arcade and three at the Royal Scot bowling alley. We made a terrible mistake with the Pinball Pete's location, picking games based on a pinball map before we actually scouted the location. I usually get there once or twice a month, but since I was out of town so much of January and I happened to miss going in February I never knew. It was maybe two weeks before the end of qualifying that we found two of the games were not there and we had to make quick substitutions.

As this implies, though, nobody had gone to Pinball Pete's to put up scores on the missing games. Turnout for the selfie league was low, even though

bunny_hugger reiterated it during league nights and such. Possibly people were distracted, though. There was a nice surge of people putting in scores in the last week, and we even picked up three people showing up the day of finals.

The really great thing was that at the Royal Scot they had Whirlwind, a 1990 game and one of only two late-solid-state game on location in the Lansing area. Unfortunately it's also suffered a string of mechanical failures, including a stretch where the ball drain wouldn't be detected, which sounds great until you realize that means the game won't send a new ball out. And then later on the upper flipper, essential for the game, broke and RED wasn't able to get it fixed before the end of qualifying.

bunny_hugger learned this to her dismay, as she tried putting in some scores one evening when league bowling was going on and clouds of fast-moving children were running around. This cost her a bit, too: she put up a six-million-point score, which would have been the best score anyone put up on Whirlwind. But she didn't have her camera with her, and if she just ran out to the car one of the kids would press the shiny flashing START button and wipe her score that won the credit. She had the thought that I did too, turn the machine off to get to the car and grab her camera. This turned out to be a tragic mistake. Turn a modern game off and on and the last played score comes up. Whirlwind? It brings up a score of zero. She played again some, putting up a quite good four million points, and making temporary friends with some of the cloud of children, but she never got back her six million points.

Well, Tuesday was finals, and I recorded the last couple scores as

bunny_hugger had to rush home from work. The tournament format was ladder, which used to be common and has fallen into disfavor as the International Flipper Pinball Association doesn't reward it with many ratings points. But if you do everything to maximize rating points you start getting boring. Ladder is a fun format.

The gimmick of ladders is that all the players are seeded in order, which is what our selfie games were all for. The tournament is a series of single games, with the players who come in last getting knocked out. The next-higher-seeded person comes in and takes their place. And then repeat, until finally the top seed enters, and then you're knocking out the tournament's fourth-place and third-place and finally second-place finishers. It's a format that encourages Cinderella stories, since most anyone can have, like, a couple games in a row where they just don't finish last. But it also rewards getting a good seed, since it's so much easier to not-finish-last in three games than in ten games.

The IFPA under-values this because their system rates a tournament's value as the typical number of games that the tournament winner had to play. And the high seed is most likely to win, unless the seeding scheme was garbage. If the #20 seed went and won fifteen games in a row it suggests some kind of mischief went on with the tournament. And we had things worse than that: with 11 people on site, and a tournament that could not start before 7:30 pm, we had to eliminate two people each round until we got to the final four. This let us play out a six-game tournament, none too long, but it demolished the tournament value. Fortunately the people there weren't playing for tournament value, but, this is the sort of thing that makes ladder tournaments rare anymore.

And how'd I do? I went in as third seed, thanks to abnormally good games of the Beatles and of Wrestlemania (a game nobody likes, but that is staying in because it's just too on-theme). And the first game I played was Kiss, one of those weird tables that nobody likes but that somehow I have a really good feel for. And I went out right away, playing just lousy. Everyone played lousy except for

bunny_hugger, who had a runaway win and stopped only because we realized that since she'd already beaten two people it didn't matter how much she stayed on fire. I finished in fifth place.

bunny_hugger meanwhile went in at fifth seed, and had to come in right from work. But the format did mean she didn't have to start playing right when she got in the door. And she had a little Cinderella story of her own. She didn't just play well her first two rounds; she won them, handily, and that against some great players like DMC. She made it to the final three before finally being knocked out, playing the modern Jurassic Park against MWS and DMC, who just ran away with it. Well, I told you the tournament system lends itself to Cinderella stories.

MWS finally beat DMC on Star Trek: The Next Generation. The table is one of the all-time greats, but it's not much liked at our venue because this particular table plays extremely hard. And it's prone to resets and mechanical failures. We'd included it in the tournament on the theory that giving people reason to practice would get them to like the table better --- often a game's reputation depends on whether anyone remembers having a good time on it --- but the table never really helped us out. DMC got a couple particularly cruel bounces and never really had a chance. The game also malfunctioned for MWS, but in a way that just reduced how much his runaway victory was.

We'll certainly do a selfie tournament like this again. Don't know if it'll be ladder format again, although since it won't interfere with

bunny_hugger's work schedule again it should allow us to start a bit earlier, and have a more valuable ladder, if we do. And the format's fun, really.

Trivia: Wrigley's Doublemint chewing gum signed Gene Autrey for the Melody Ranch series in 1940; the show, with the same sponsor and star, lasted for sixteen years, one of the longest sponsor-star arrangements in American radio. Source: The Mighty Music Box: The Golden Age of Musical Radio, Thomas A Delong.

Currently Reading: The Museum of Hoaxes: A Collection of Pranks, Stunts, Deceptions, and Other Wonderful Stories Contrived for the Public from the Middle Ages to the New Millenium, Alex Boese.

PS: So what's next? A rare non-amusement-park visit for us! Instead we went to a carnival, BalloonFest in Howell, Michigan. Which had roller coasters. Actually we went to two carnivals in one day, which was maybe one more carnival than we should have attempted, but we didn't have the time to do it in two separate days. So here's what we saw. 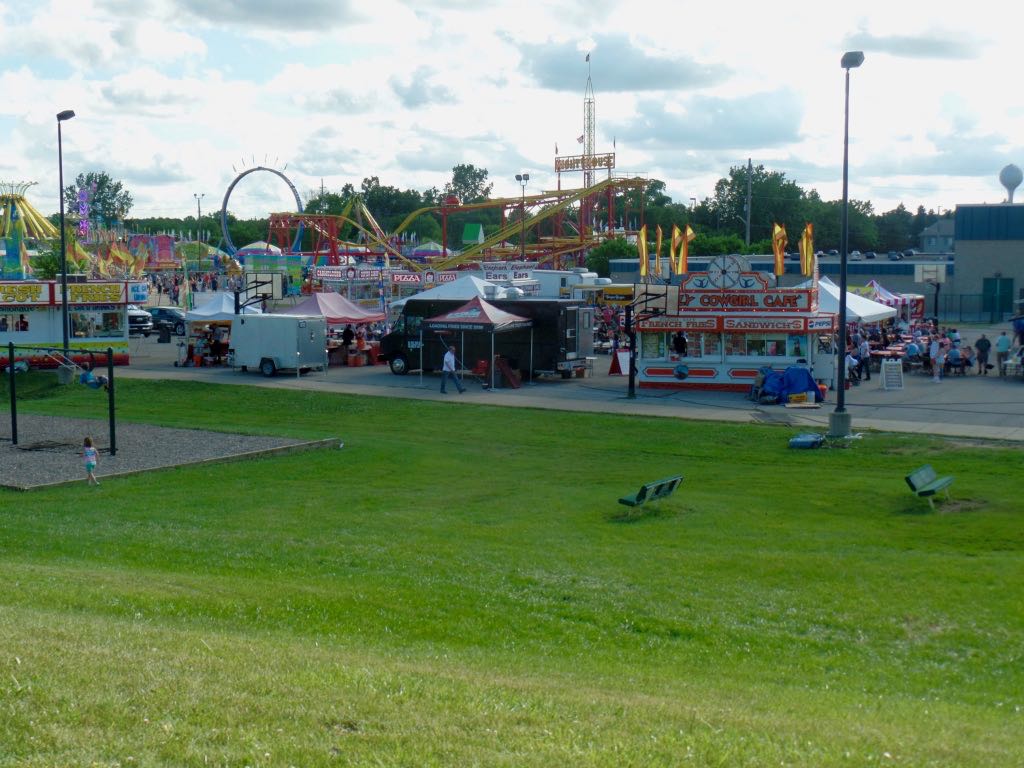 BalloonFest was set up on schoolgrounds. Here's the basic setup of the carnival area. 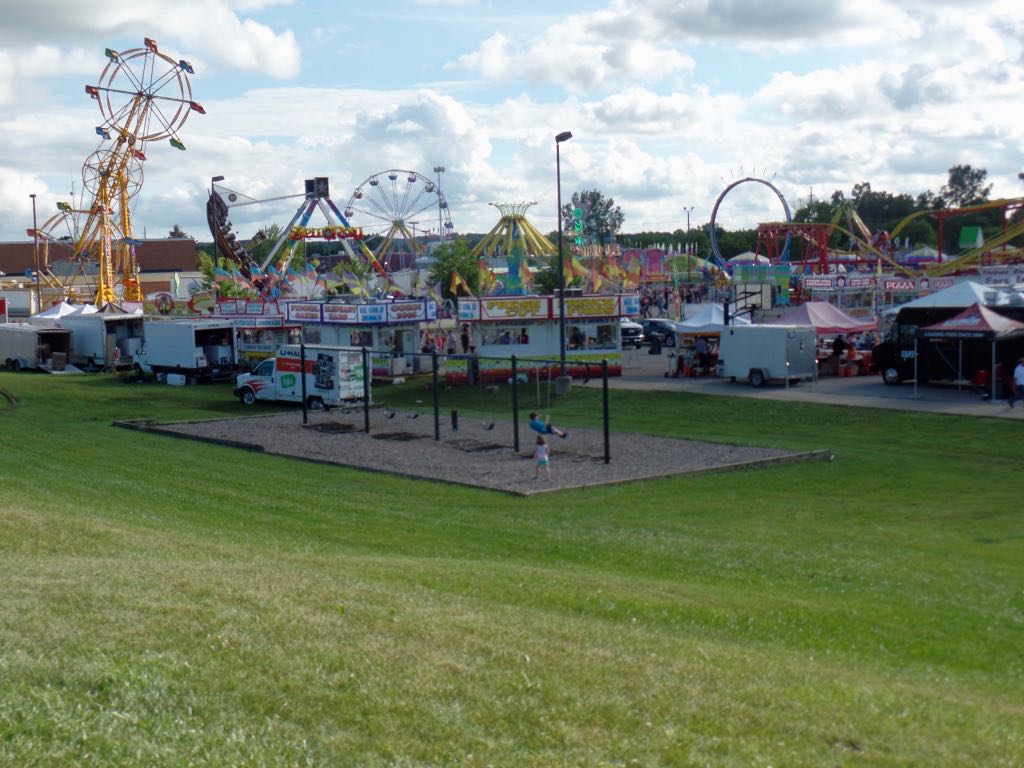 Another view of the carnival area; you can see the normal playground setup too. 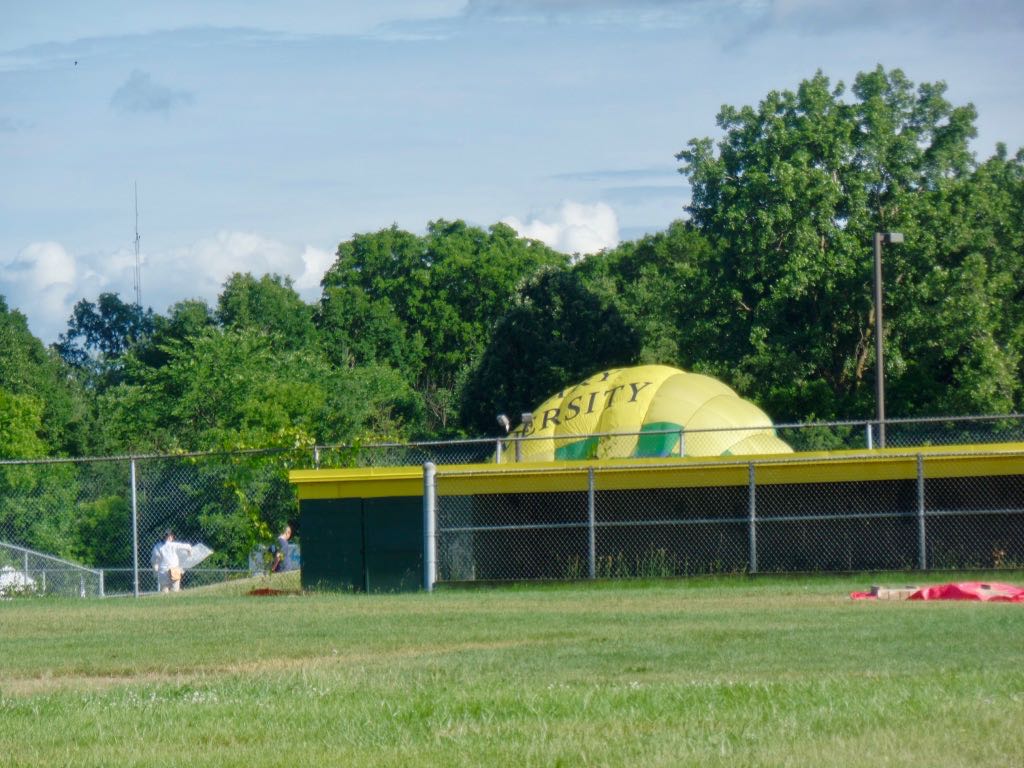 And here's a balloon getting itself ready to fest!