It's not in any of the books you can read, it's no fun to face what you don't get to be

bunny_hugger asked what was new when she came down this morning. I had the exciting news that Michigan State University had --- well, not cancelled classes. Gone to virtual classes for a month-plus. This to limit how much they'll be spreading Covid-19. And we had to admit feeling weird that it was so thrilling to go through something so unprecedented and weird. I was in Singapore for the SARS epidemic --- if I were smart I'd have started my blog then, as it was fascinating living through day by day --- and they never cancelled university classes, although primary and secondary schools did close for a couple weeks. There were little adjustments, and some frightening moments. The one that stands out to me is cases of SARS being found at Pasir Panjang, a major food wholesale market. But then, well, you can say many things about the Singapore government, but you can't accuse them of incompetence or corruption or the other great sins that make a crisis into a disaster.

And we got to wondering whether

bunny_hugger's school would cancel--- virtualize --- classes. We agreed it would be really good idea if they closed now, since the school's on Spring Break. Having everyone stay home a while until whatever they were exposed to during break has passed would be a really good idea. They'd gotten a cryptic e-mail from the dean about having virtualization plans ready. And then MWS messaged

bunny_hugger to ask if she'd made plans for staying home. As she was saying that she hadn't heard anything, both our land-line and

bunny_hugger's hand phone rang. It was the school, announcing that they were switching to virtual classes for one week after Spring Break.

So it's exciting to be going through. Also for

bunny_hugger to figure out how to deliver lectures given that students won't watch videos for more than five minutes, and she doesn't want to record videos. Audio is the obvious alternative, but how long do students listen to that? And while ``don't reopen after Spring Break'' is a really good plan --- MSU was in class for two and a half days after their break --- one week seems like a very short time for this. MSU is virtualizing classes for a month, after all. But the announcement came down just hours after MSU did, and before University of Michigan closed, also through April 20th. They might not have felt confident announcing more before the other top-level school had cancelled.

Still, hey, extra spring break time. Not really, although it's hard to imagine the students won't treat it like that. And there's presentations and things like that to rejigger, if the university reopens at all for the semester.

Coincidentally we saw that Motor City Fur[ry] Convention is still planning to go ahead, the first weekend of April. But that they're watching the situation. I'm no longer fully confident that the convention will go on as scheduled, not with the first couple cases and declaration of a state of emergency in Michigan.

bunny_hugger pondered whether to postpone the March Hare Madness pinball tournament, set for a week from today. That seems too soon, though; after all, one to two dozen people gathering in a bar for four hours is different from two thousand furries gathering in a hotel for three days. Or 20,000 students gathering on campus.

It does feel very different to living in Singapore during the SARS crisis, though.

PS: Find the Factors hosted the Playful Math Education Blog Carnival this month, just a heads-up for people since I didn't write the thing I meant to write. Work obligations.

PPS: So after BalloonFest we drove east, to get to Livonia Spree, a massive fair held in Livonia in mid-June. The fair had a travelling roller coaster, a nice big one, and

bunny_hugger was ready for it to be the 250th logged coaster she's ridden. 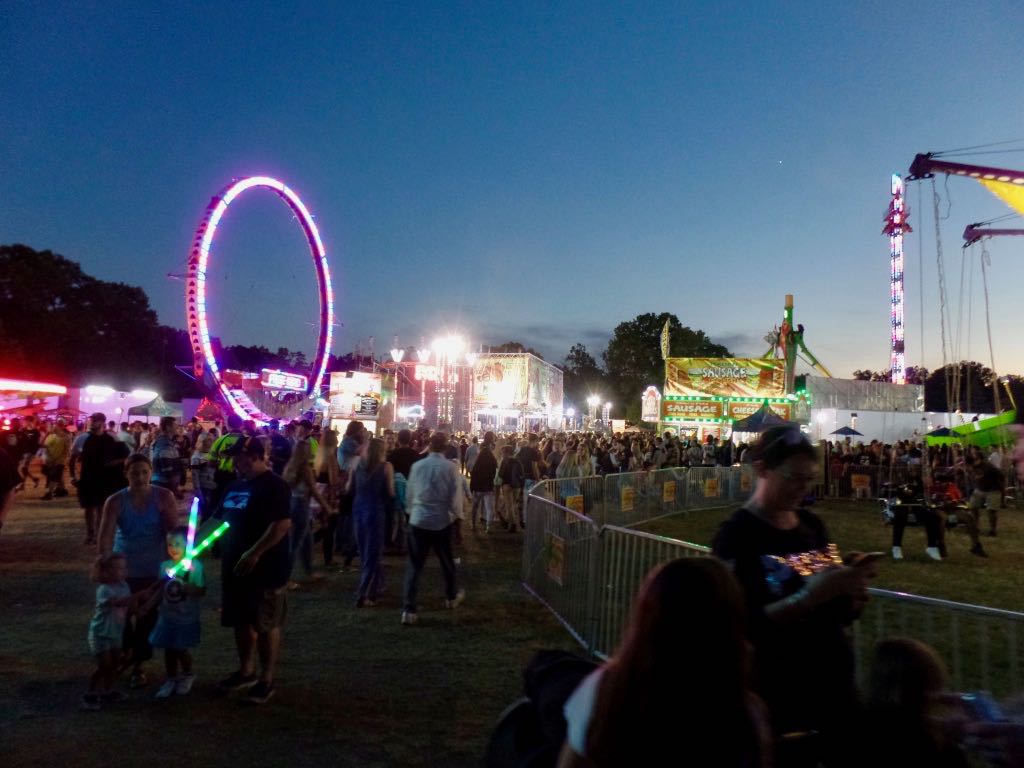 Between how long we spent at BalloonFest, and the drive, and the traffic, and getting from the designated parking areas to the fairground --- they had a shuttle-bus we had to use --- it was dusk by the time we even got there. Which has the advantage that every photograph is rides being beacons of their own light, like this. 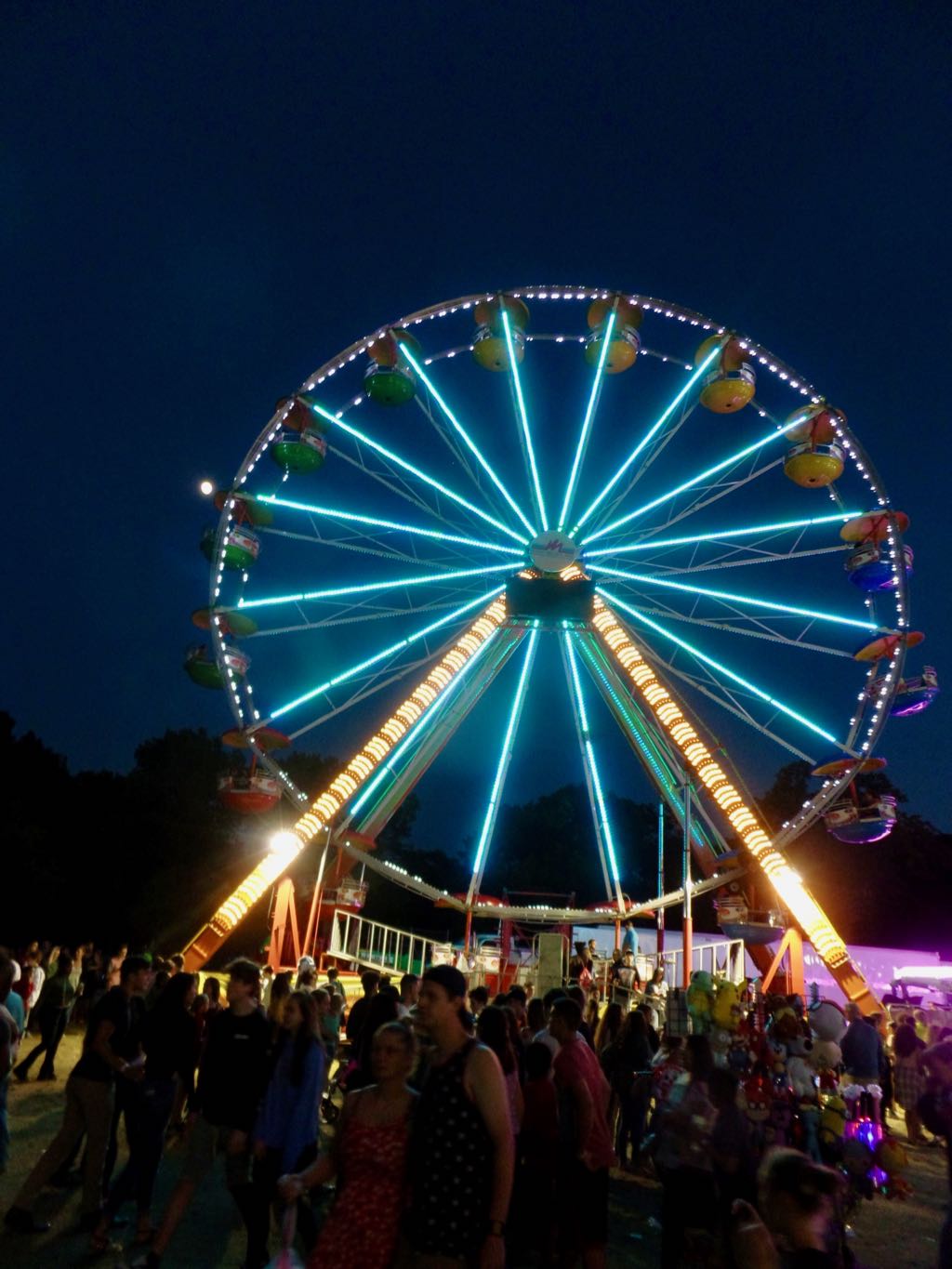 See, here's the Ferris wheel, a pretty good-size ride considering it's a travelling wheel. And hey, look at what's on the left there. 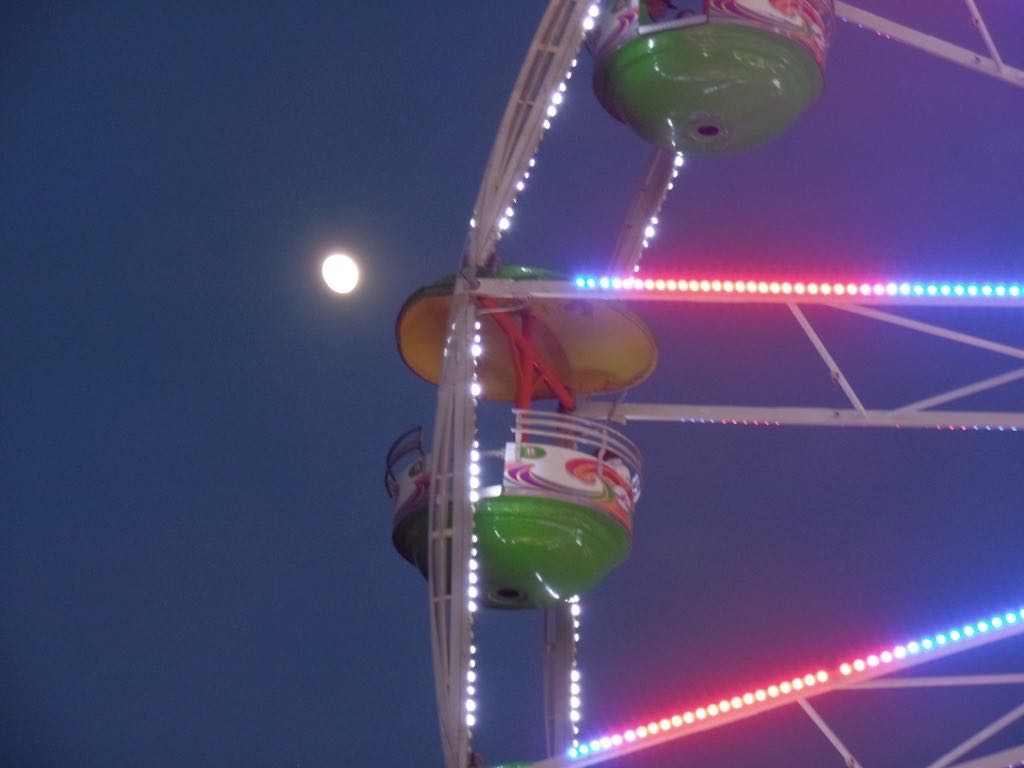 The gibbous moon hangs just off one of the Ferris wheel cabs.