Don't sympathize with the mystery disease

So, we have a sick goldfish.

bunny_hugger noticed on Wednesday that one of our fish was on its side, on the bottom of its tank. It could be prodded into a little movement, where it would spiral in and fall, failing to really swim. It only became critical in the last few days; I hadn't noticed anything particularly out of the ordinary over the weekend when I had last tested the water quality. But I also hadn't studied the fish's behavior and am less aware of the minor signs of distress than

So, we went into emergency care mode. The first thing was setting up a quarantine tank. Oh, we have a quarantine tank, but there's two fish in it, our giant ones who had the mysterious scrape and fungal infection at the start of the season. They seem recovered from their woes and we could likely put them back with the general population, but we haven't done that. We couldn't put the silver fish into the quarantine tank with them, as those fish are much larger than the silver one and we don't want it being picked on. Or possibly spreading an infection to its parents or grandparents.

So we used a 20-gallon plastic storage bin as a second quarantine tank, and set the fish up alone in that. And we got a good look and some pictures. It's got these red sores around its gills and chest.

bunny_hugger's reading makes her think this is likely something called 'red pest' or 'pond pest', a bacterial mess that infects already-compromised fish, so this represents half of an explanation. (It strikes me this is the same tank that the large fish with the fungal infection was from, but that was five months ago and 'red pest' is not very communicable.)

We took the pictures and a water sample to the Preuss pet shop. They're fish specialists. We figured we'd spare the silver one the trouble of being moved unless they thought it worth bringing the fish in. The verdict is that our water is basically fine, apart from being higher in nitrates than I had been reading. Well, it's very hard to tell the colors apart on the test kit's chart, it's all grades of red. But it suggests a need for more changes of water. (Nitrates are what you get after the ammonia excreted by fish go through a couple rounds of bacterial eating. In the wild they're absorbed by plants and soil; in our tanks, there's not much of a place for them to go.) The nitrates weren't high enough to be suspects in the fish's problems, but I'd rather head that problem off.

We have the fish on antibiotics. Those are best given in food, but the fish wasn't much interested in swimming all the way to the water's surface to eat. It can be diffused into the water, but that's a less efficient treatment.

bunny_hugger is not optimistic. She has rarely seen a fish in this much distress come back healthy. But what choice do we have but to try our best and see if something comes through?

Trivia: The anti-contamination uniforms in the Jet Propulsion Lab's Spacecraft Assembly Factory, at the time of the Mars Exploration Rover assembly, were a robin's-egg blue smock and booties, with a white hairnet. Source: Roving Mars: Spirit, Opportunity, and the Exploration of the Red Planet, Steve Squyres.

PS: Getting Ready for Pi Day, and also the Playful Math Blog Carnival, which is me appealing for new stuff to read and sharing some old stuff to read.

PPS: So here's a couple more pictures from Livonia Spree and our short adventure at it. 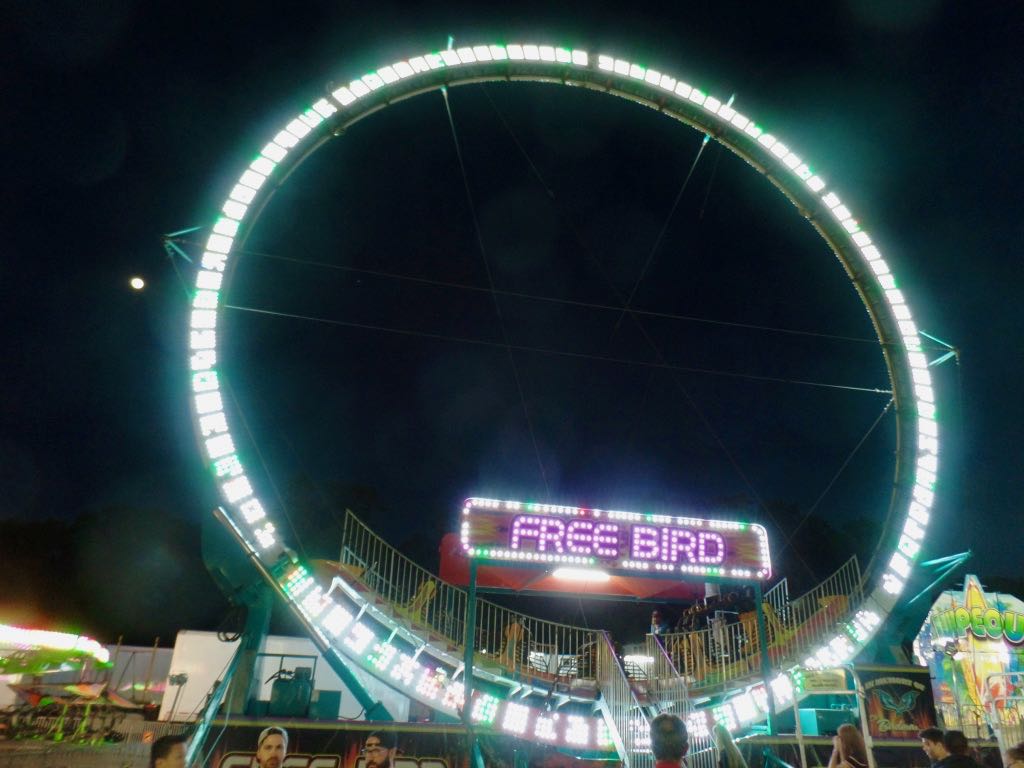 Play it! A Fire Ball, successor model to the Ring of Fire as seen at the BalloonFest and other rides. 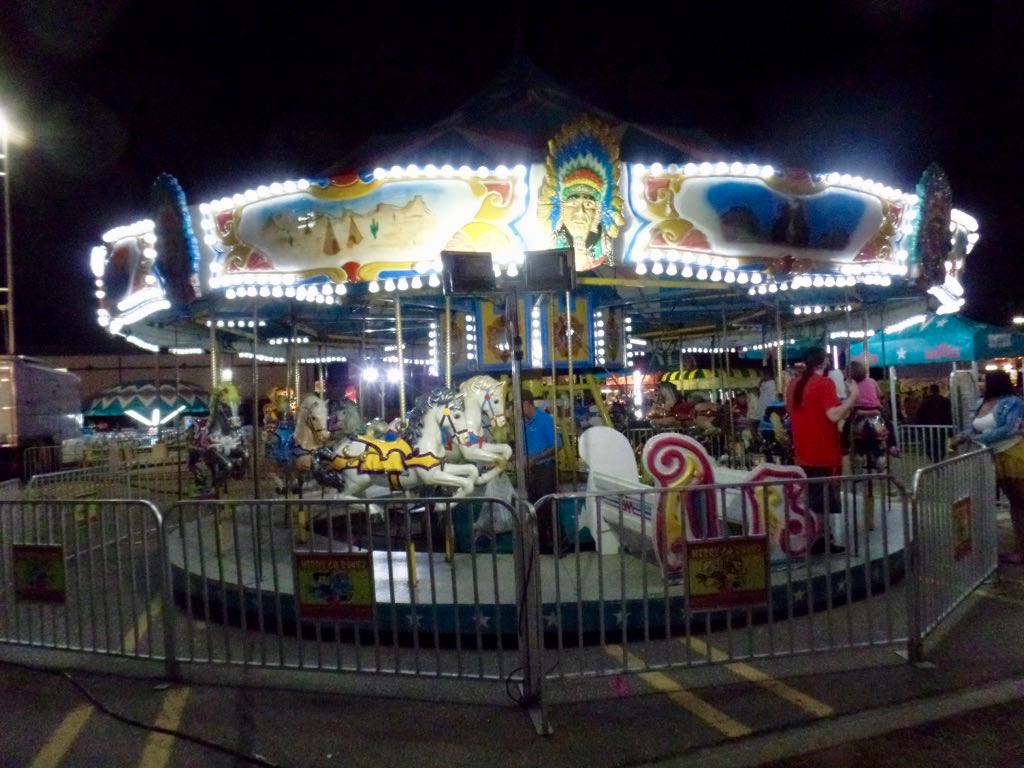 Small carousel that we figured, hey, we could ride that and use some of the ride coupons I'd bought before finding out the Super Cyclone wasn't running. 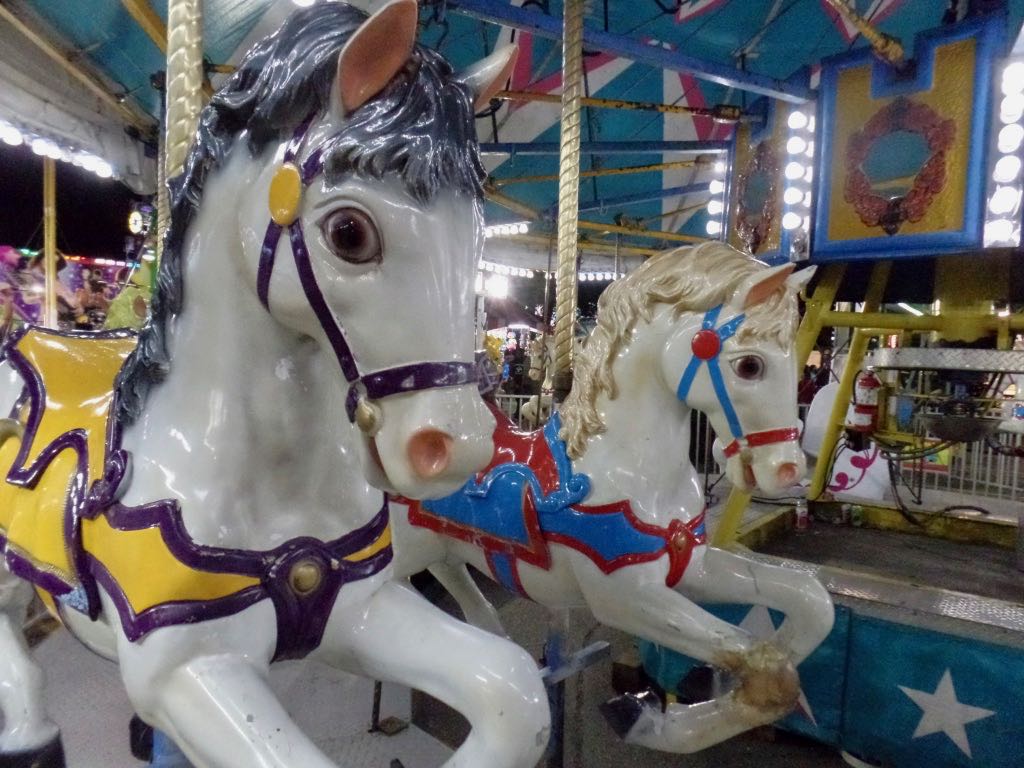