I mentioned having gone to Chesterfield Pinball League last week. Last Monday, when that sort of thing was uncontentious. This was because

bunny_hugger had Spring Break, and so a then-rare Monday night when she didn't have to be anywhere Tuesday morning. So the two-hour drive out there was no especial trouble. MWS, normally our partner in this, couldn't make it as he was going to Trivia Night with his family.

Chesterfield has changed away from the Flipper Frenzy format. In Flipper Frenzy, you play two pinball games in a row, get a break, and then go back to two more, according to an algorithm that's meant to get you to play a lot. This turned off a lot of players, some because it meant you couldn't go out for a smoke or get something to eat. Some because they knew it was possible to game the system: walk slowly back to the computer to report on your last match and you might get a better partner. Some because they just never understood how pairings were drawn up. Some because they could be forced into the dilemma: struggle to overcome this guy's large lead, or concede a loss and hope you can make it up on a future round? With dwindling attendance the league switched back to match play, forming groups of four people and setting them in a random order on a randomly chosen game. There'd be only five or six rounds, depending on time, but on the other hand, you could hang out and talk with the people you're playing with.

bunny_hugger had the game of her life on Rollergames her first round, putting up over 12 million points and even fending off a weird game malfunction that probably should have ended an opponent's ball but, in the official ruling, did not. Then everything went lousy: a last place on a weak round of Attack From Mars. A third place on Meteor, a game she'd practiced before league and consistently scored well enough to have won that group. And then in the fourth round, of an ultimate six ... we faced each other. And two other people, on Time Warp. The 1980 game with the curved banana flippers.

I like this game. I like the weird experimental curved flippers. I used to be decent at the game when it was at Stella's in Grand Rapids. I could do not a blasted thing with it this round, though.

bunny_hugger could do little either, but she at least got third place. I finished a dismal last.

She would go on to her favorite game, FunHouse, and make use of the thing she knows about that particular table there: it hasn't got a tilt. Despite this and some good play, she got beaten out by both MJV and JRA. And then closed the tournament on another well-loved game, Hurricane, part of the roller coaster series. Everyone has a lousy game on this, and she has a typically bad one, finishing in third place.

Me? My next round is Medieval Madness, a game which is wonderfully easy in tournament play in principle: shoot the castle. Forever. If you can find that shot, all is happy. I have a weird little thing my first ball, getting credit for a castle-destroying shot that I shouldn't have, and I call over the tournament director, who it happens is in my group, to ask about this. He says we'll watch to see whether it was a fluke or not. The problem doesn't recur, though, so I get to keep my not-exactly-earned two million points. I fumble the second ball, though, and that leaves me in second place, where a first would have got me into range of first place for the night.

The last game: Attack From Mars. Which is the same game as Medieval Madness, albeit with saucers instead of castles to shoot at. This is good. The bad: JRA is in my group; he's gotten good enough, especially on a game like this where you can just shoot one target all day, that he can easily run away with the game.

He does not. Nobody does, really. I do the least running away with it, fumbling away the first two balls. JRA, incredibly, goes home, the rumo being that he's calculated that he can't win a trophy position and it is getting late. (It's not that late.) At least it's an opening for me. If I can just get control, shoot the saucer, and keep going, I can win the round. I get the saucer that I need. And I start multiball, which should be a points mine. What I do not know at this point is that the rightmost orbit switch isn't registering. Attack From Mars uses the model where there are a bunch of shots lit for jackpot, and if you get them all, a huge super jackpot lights. The last jackpot is unavailable, and the super jackpot is out of reach; I don't realize this. When multiball ends I can get back to the work of knocking down saucers, if I don't fumble the ball, which I do, and I end in last place for the group.

Neither of us make even the top ten of finishers. For such a long drive, for a place so hard to visit, it's disheartening.

The pinball league evaporates in strikingly little time. We stick around, figuring to stay until the place closes at a nominal 11 pm. This gives us the chance to play some games, like Dr Dude, a late-solid-state game that I like a little bit more every time I play it. I play a game of Dialed In!, which has just disappeared from location pinball, and have the game of my life, racing through modes as if I were fleeing a volcano, and getting to the mini-wizard Chaos In Quantum City mode.

Trivia: In the 1950s IBM was General Electric's largest customer for vacuum tubes. Some have attributed GE's reluctance to produce electronic computers to not wanting to spoil its own market. Source: A History of Modern Computing, Paul E Ceruzzi.

Currently Reading: The Lost City of the Monkey God: A True Story, Douglas Preston. Will admit I've been disappointed by the lack of encounters with coatis in the Honduran jungle here. Just saying.

PS: In a once-in-a-lifetime synchronicity, I have some pictures of an earlier visit to Chesterfield, from 2018, to share. Just a few; to an extent, every pinball tournament kind of looks the same. But today and tomorrow, here's this: 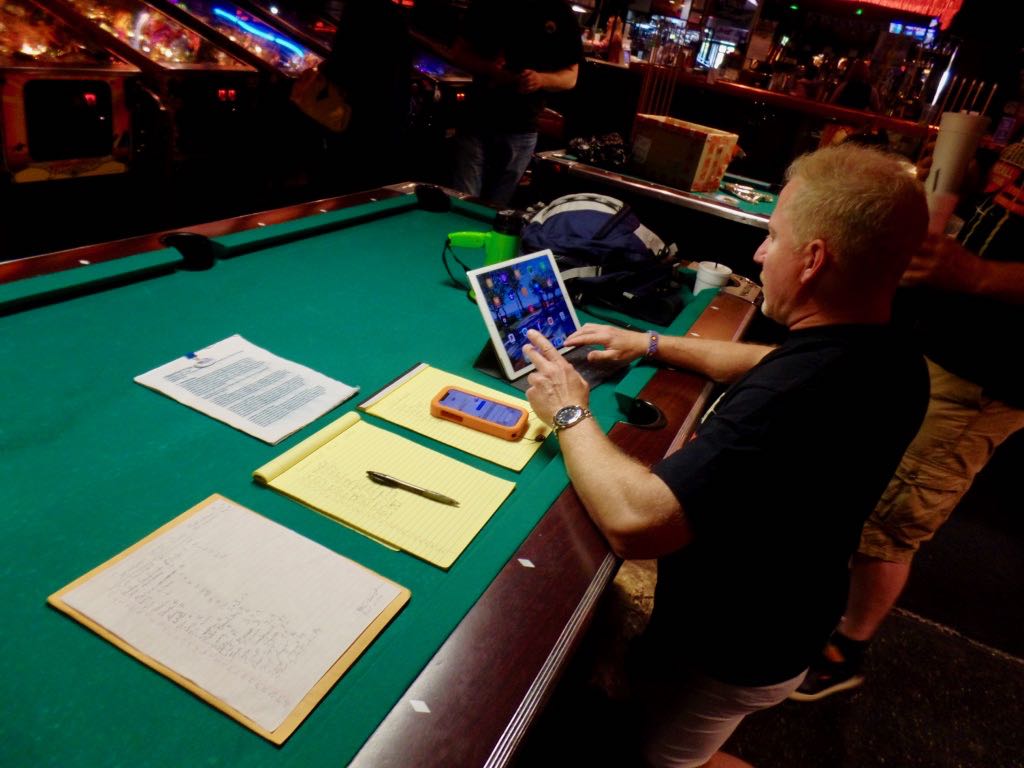 Setup. A pinball tournament involves a lot of typing things into other things, and about every notepad in the world. The typewritten thing off on the side is the Official Rules of the league, which at some point got a drink spilled on them and while the rules were dried out I'm not sure anyone's ever checked to see if the pages can be separated anymore. 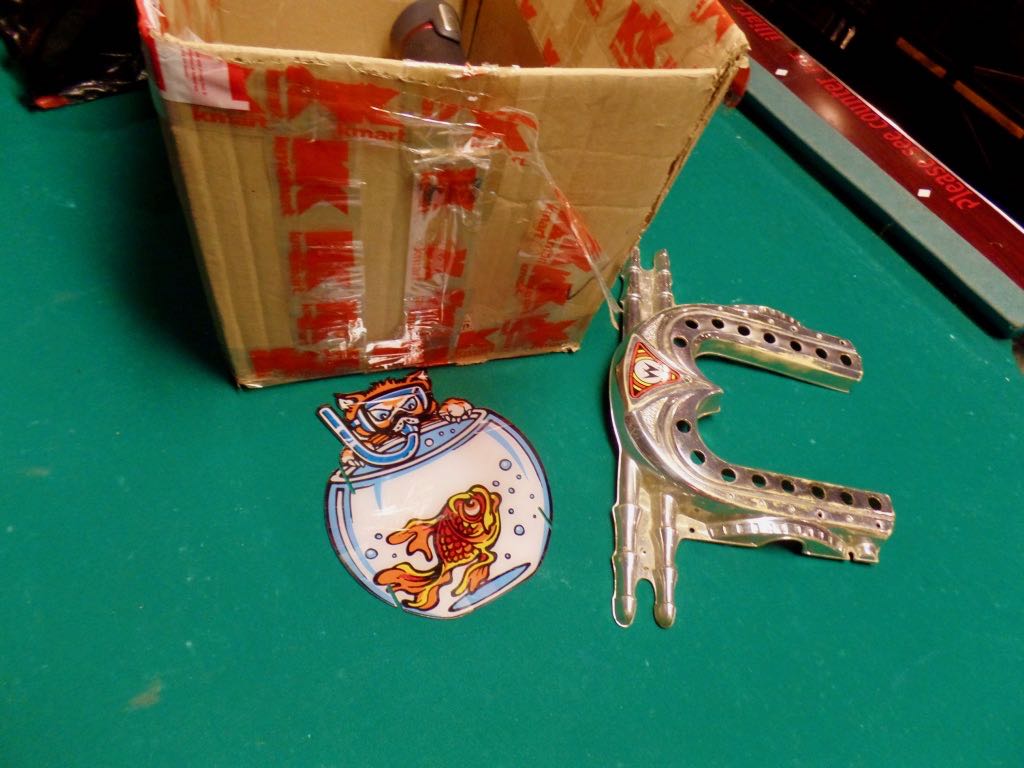 Props: Chesterfield often has miscellaneous pinball parts to show here. Here, the cat and the fishbowl is a promotional piece from Bad Cats (meow meow meow meow). The helmet on the right, tilted sideways, fits around the head of The Machine Bride of Pinbot; the holes along the U-shaped part there go over blinking lights to emphasize that she's a robot. 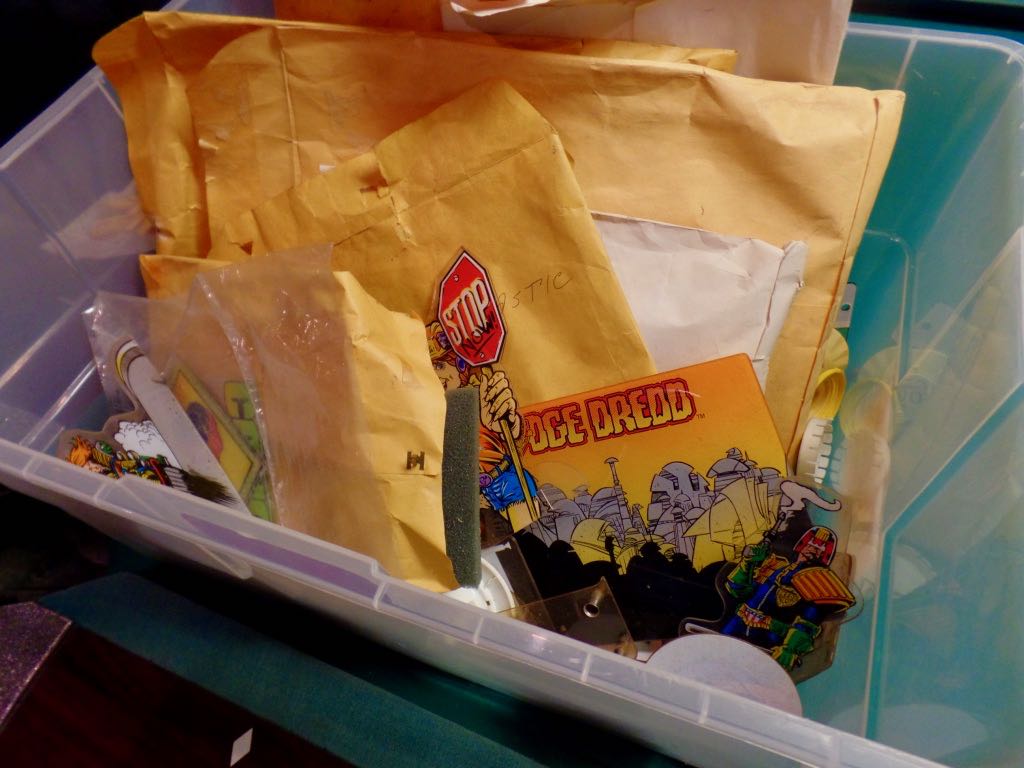 Big box full of, in part, promotional plastics and such. But also a lot of the owner's manuals and other informational papers for games. And spare plastic parts that might come off or break during a game.