bunny_hugger's parents. We hadn't seen them in a month or so, and this was a good time for it, since there'd be so little class work for her. We planned on Saturday, to have breakfast-for-dinner and also play some Mice and Mystics and generally see them.

As the week developed, so did the Covid-19.

bunny_hugger's school called off for a week. She had to find someone with a copy of a textbook that she had left at school on the reasonable supposition that she'd be getting back there. We checked with

bunny_hugger's parents that they did not mind the risk of infection from us. We thought over how we'd check that we didn't have anything, before going over. To the best of our ability to tell, of course.

And we had a good time.

bunny_hugger was able to swiftly fix a problem they were having with their BritBox streaming account. I was able to have nothing to do with that, which logically should reassure them that

bunny_hugger is the brains in our computer-problem-fixing environment, although it won't. Along the way she fixed the printer that wasn't working, which I think she said was just there was an update that needed running.

They had just made a big shopping trip, their biggest in years. Not that they were looking to hoard, particularly, but that they don't want to make a greater number of trips than they have to, given their (reasonable) health fears. We offered that we could do shopping trips for them, an offer maybe made two days too late to save them any real trouble just now. But we'll see.

Her parents made dinner. We'd volunteered to bring dip but they declined. Her father made scrambled eggs; her mother, pancakes and (vegetarian) sausage patties and such. This was nice and easy and abundant and all really good.

And there was a nice surprise: an opossum came tromping along the bank of the river, across the road from their house. A bit later the opossum came back, puttering over to the shelter where her parents feed feral cats. I even saw the opossum leaving, maybe a half-hour later. We've had a fair number of raccoon sightings; this is the first opossum that I've noticed there.

As we planned, we played a chapter of Mice and Mystics. It would be an unusual one. The chapter rules wouldn't let her father play her usual mouse. They also recommended a particular party that was mostly characters

bunny_hugger and I always played. And, more: it was to be a stealth mission, with special rules where the bad guys we'd combat would not be chosen the usual way. Still, it's worth spending some time playing and, who knows, sometimes we get lucky.

We got extremely lucky. There is a lot of dice-rolling in the game, and a lot of the dice came out like we'd have hoped. Also we got really good at using special abilities, particularly the game's mana, wedges of cheese. We were even able to get two characters levelled up and equipped with new abilities. And we even beat the chapter, first time through, and not by the skin of our teeth either. It's rare that we have everything come together so well.

After a while, and some coffee and tea and more talk, we went home.

They asked us to not come back again, even though we'll have the free weekends. To minimize the risk of contracting something that we're exposed to. Easter will be an exception; it would be terrible not to get to dye eggs and watch the Easter Beagle and all that. But otherwise we have the strange case of plenty of time to visit lonely people who, for honestly good reason, would rather we stayed home and maybe phoned instead.

Trivia: An anonymous call went through north Texas in January of 1861, urging that in the case of secession the northern counties should secede in turn and remain with the Union, possibly as a new state. Nothing came of it. Source: Look Away! A History of the Confederate States of America, William C Davis.

Currently Reading: The Lost City of the Monkey God: A True Story, Douglas Preston. Yeah, this bit at the end about Preston and the expedition getting back and getting a really nasty parasite disease, and how global warming promises more of that in new places? Not sure I'd ever have liked that but this is really not the week to be reading it.

PS: How February 2020 Treated My Mathematics Blog, as I finally remember to write the easiest post I have for every month.

PPS: Another look at this one Chesterfield event, a couple years ago. 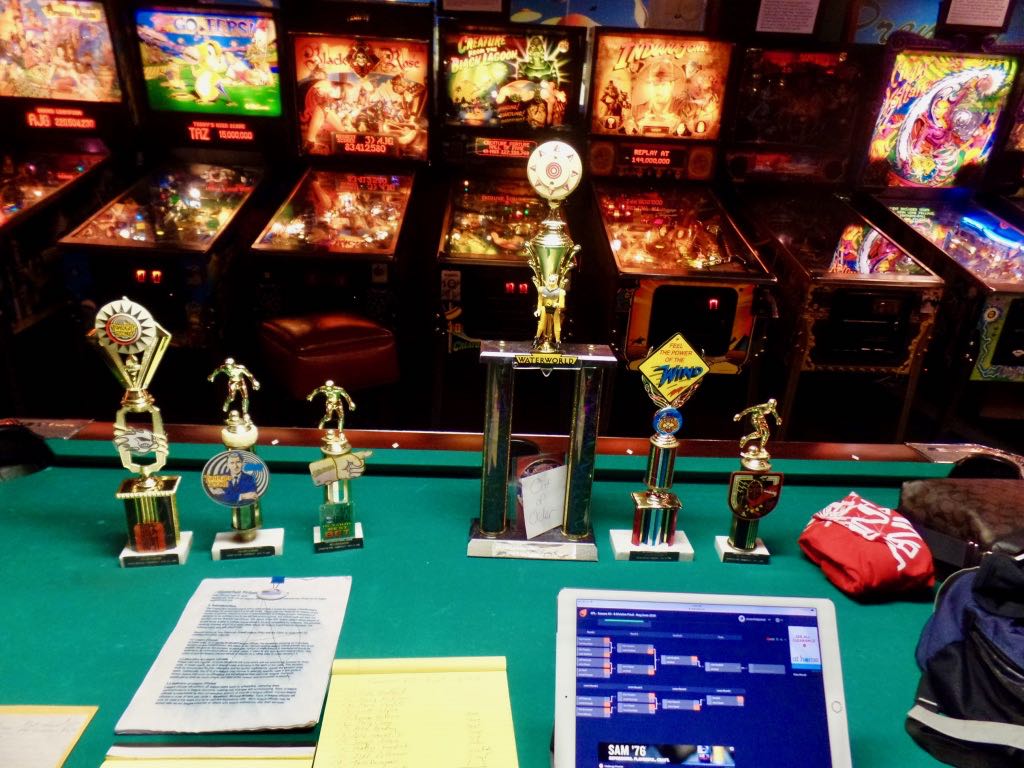 Trophies! I forget why there were so many at this tournament; they usually give out only four. In the background are some games. You may see at the top of, like, Cirqus Voltaire on the right a sign above the games. The Chesterfield league meets at what bills itself the Sparks Pinball Museum, which mostly means that many of the games have signs explaining their historical context and otherwise it's a pinball arcade with like fifty games, most of then 80s and 90s tables. 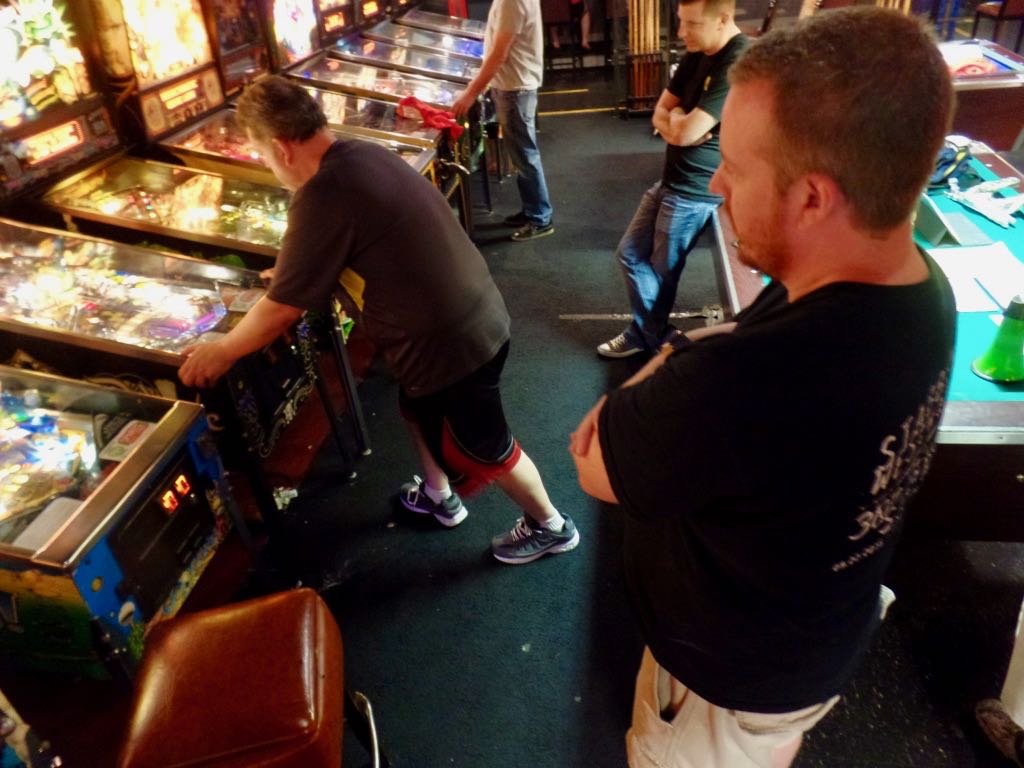 Tense moments as we watch finals play out. 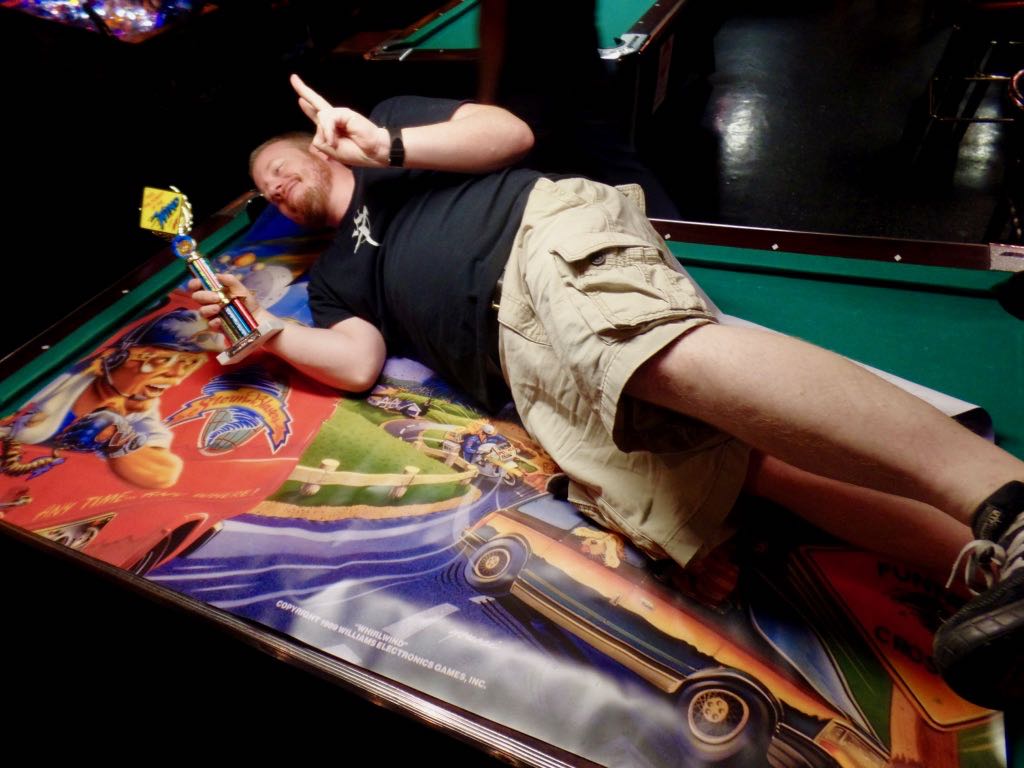 Some people get all smug and silly when they've won a little piece of shiny plastic like that.