Cedar Point's announced they're postponing the opening of their season. Which again is right and unsurprising, it's just hard accepting that it's official. As of right now they think they'll open in mid-May and wouldn't that be wonderful? Also: they were figuring to open before mid-May until all this happened. The fascinating thing is they hope to be ``adding days to the park's operating calendar'' for season passholders. There's not a lot of days they can do that unless they stay open weekdays in the fall, or extend the season into November, which would be (a) insane and (b) still not a chance for

bunny_hugger to ride a roller coaster on her birthday, since that'll be a Thursday this year, but to ride Blue Streak after her birthday would be awesome. Michigan's Adventure still thinks it'll open the 20th of May (for a half-day school thing) or the 22nd (for weekend operations).

I'm scared for many things. The amusement parks are among them. Not Cedar Point, not really, or its chain. They'll have a bad year but they've got the ability to command money to survive this. But, like, Waldameer? Seabreeze? Keansburg? Quassy? Not to mention the parks that were already ghosts and would need an extraordinary event to survive, like Clementon or Indiana Beach.

I fear saying how bad a year I think this will be, as that makes it real.

The first of my podcasts has gone into reruns for the duration. That's the BBC's In Our Time, which has thus revealed itself as recording closer to broadcast than I would have imagined. The show format, three experts talking about their subject, is something that they could surely rejigger to be done remotely; it just takes time to ready for that. I do wonder how long that all is going to take, though. 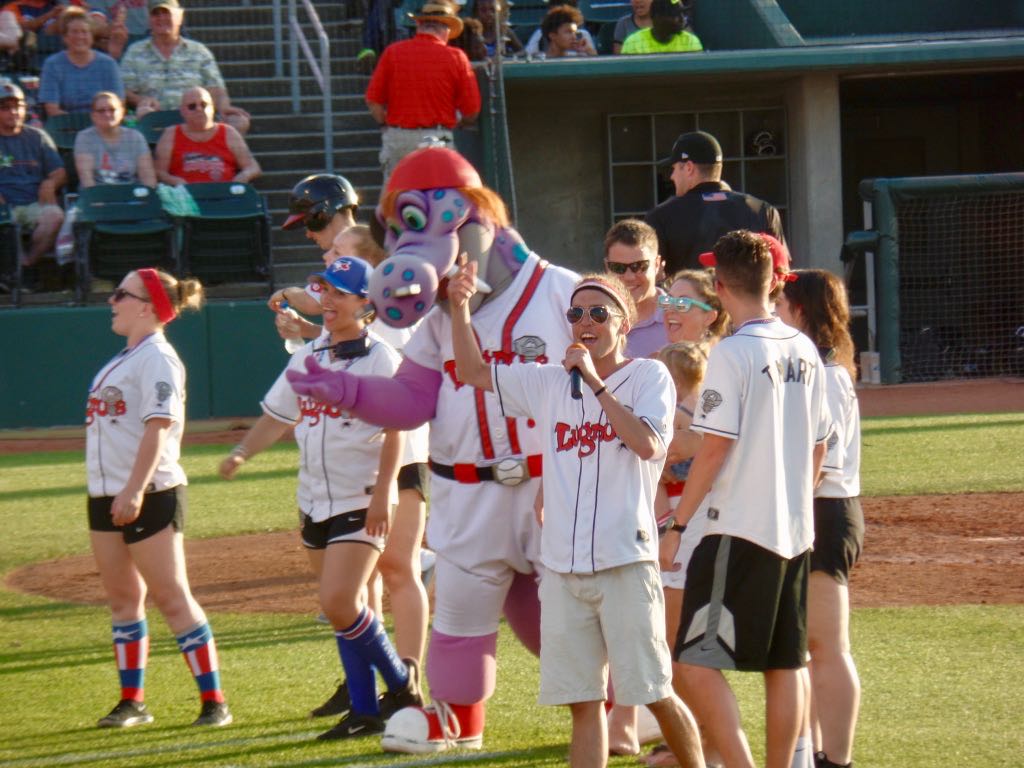 More between-inning shenanigans with Big Lug, dragon mascot, and a bunch of people who were here for ... not sure. Some nice silly thing, anyway. 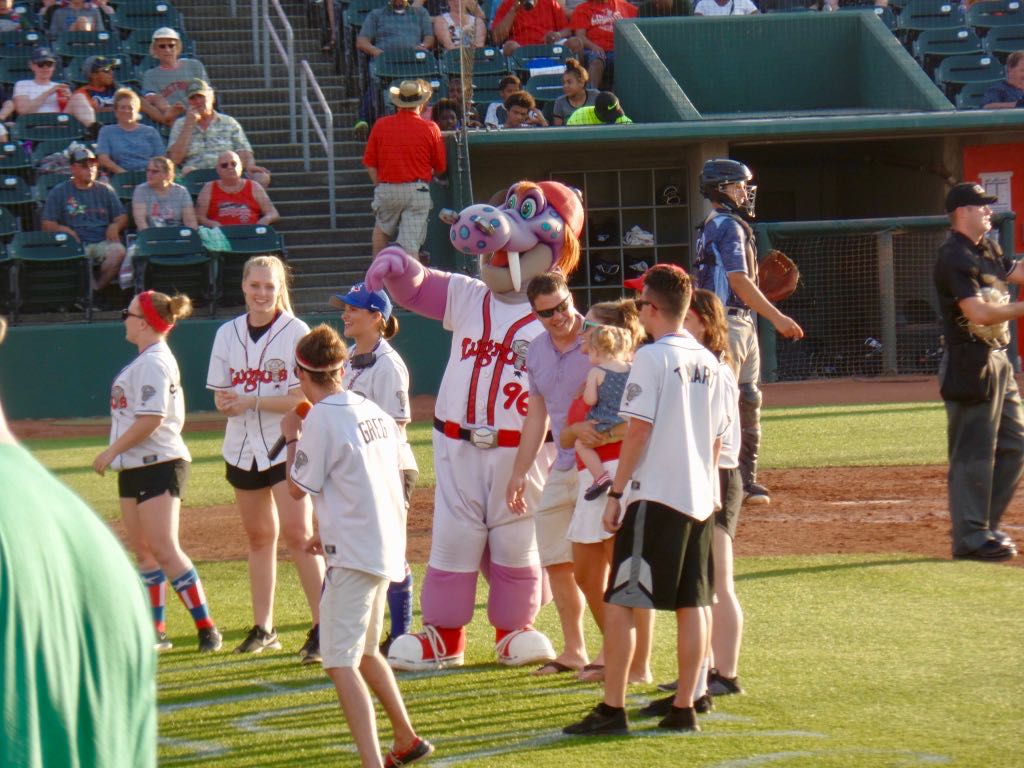 Maybe it was singing happy birthday to the attendees with birthdays that month? Something merry like that, at any rate. 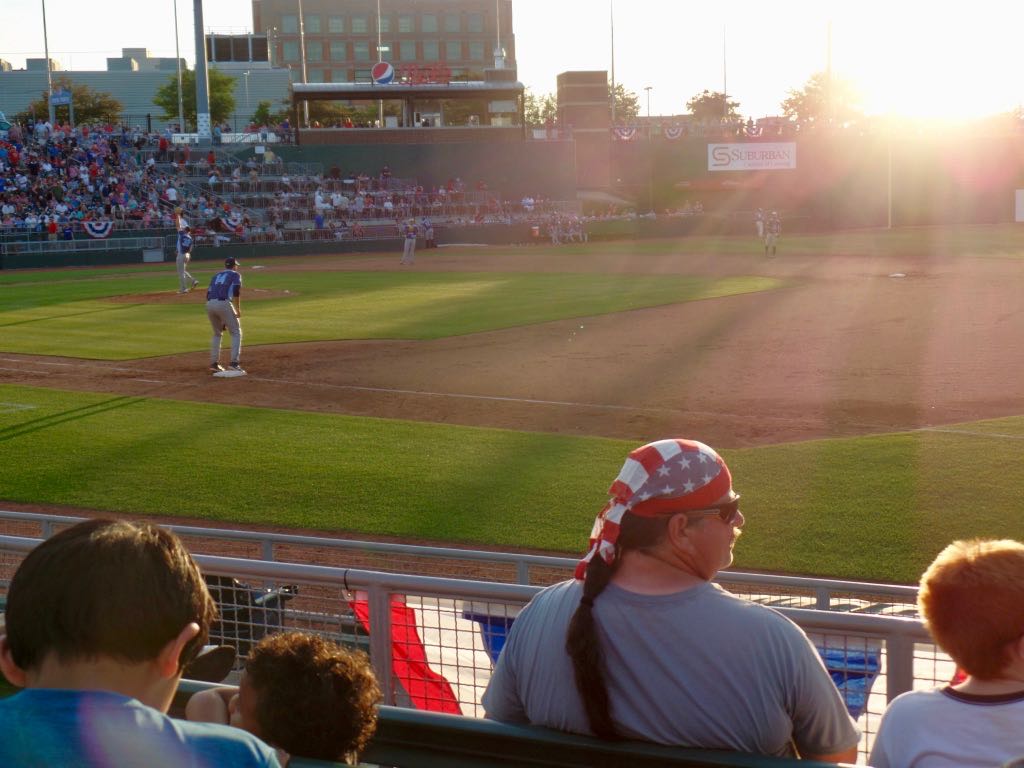 bunny_hugger can't complain about the dust on my camera lens too much. 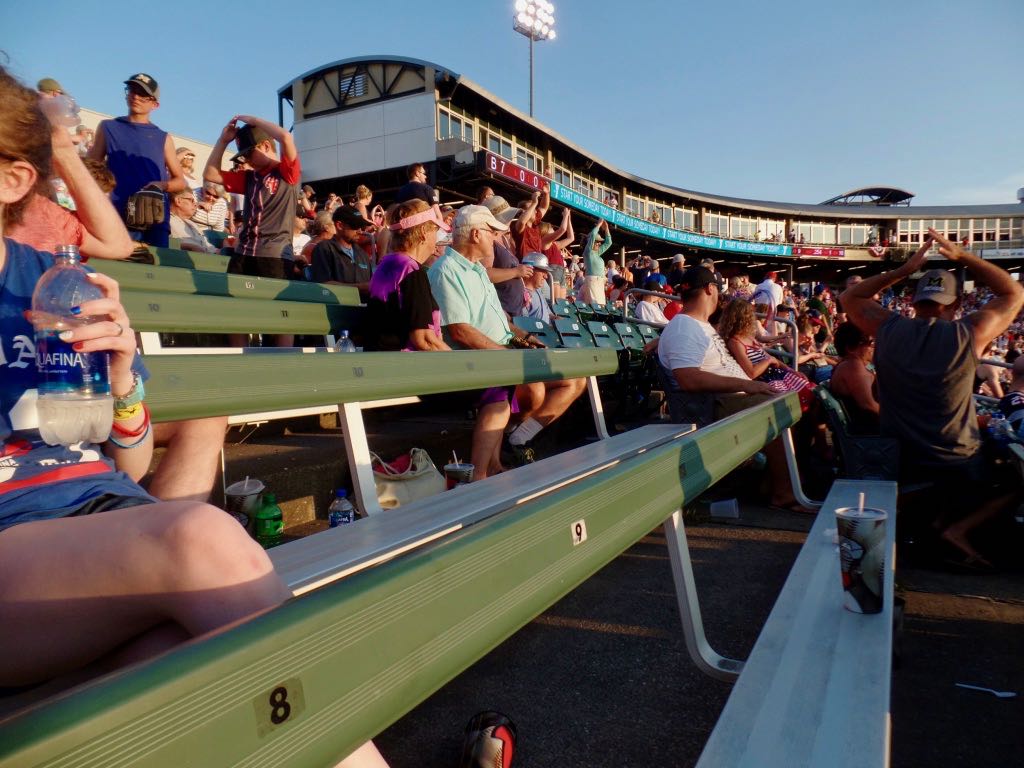 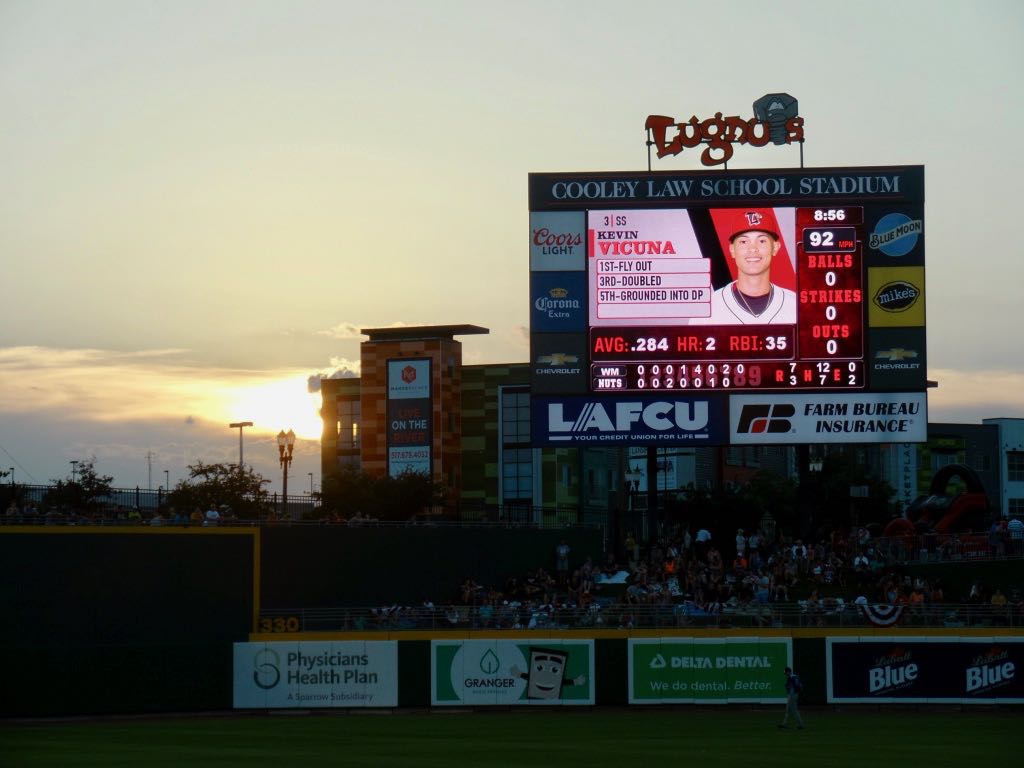 ``Seriously, Kevin? Llama is `too trendy` for you? Your fursona's a freaking vicuña?'' (Yeah, well, this is why I'm a coati and not a raccoon.) 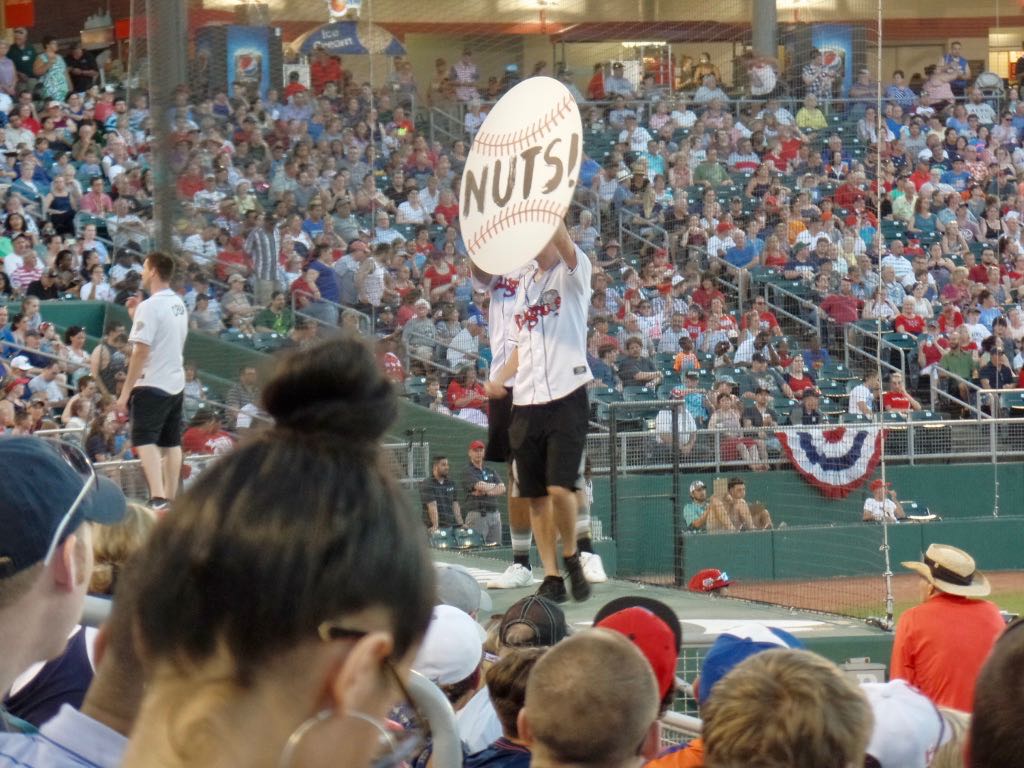 Says it all, doesn't it? Sign held up before the bottom of the last inning, trying to rally the Lugnuts to make up a four-run deficit. 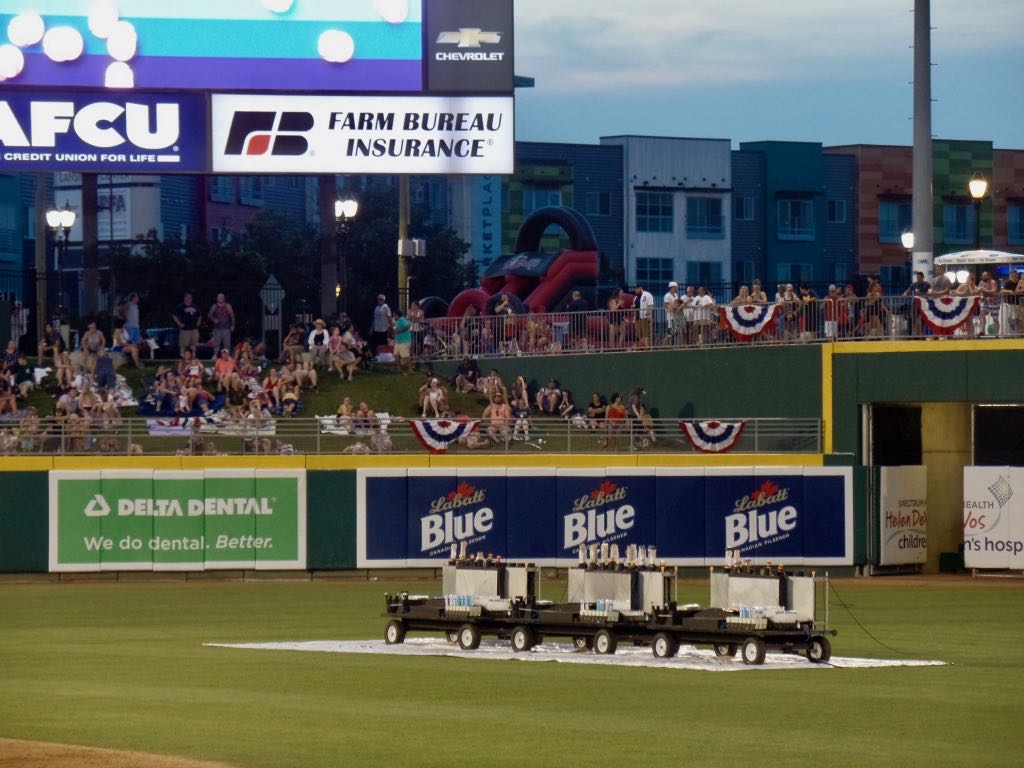 The park's fireworks wheeled out to center field and ready for the show. Doesn't seem like much, does it? 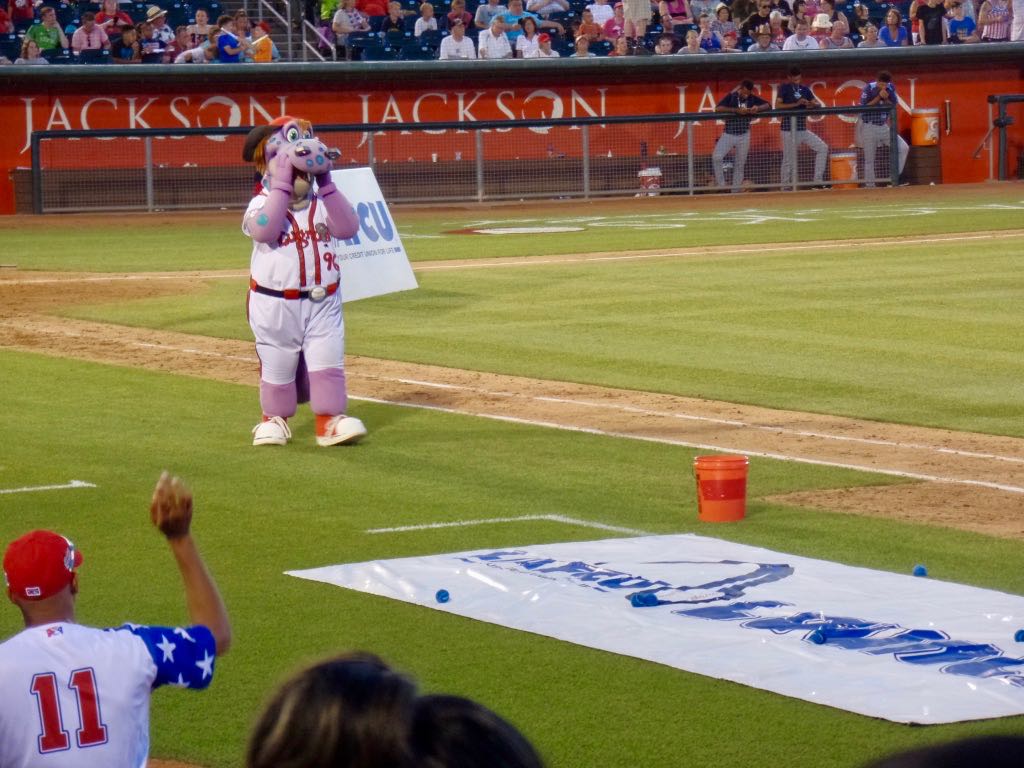 Big Lug overseeing this ball-tossing thing for prizes that covers the gap between the end of the game and when the fireworks are set up. 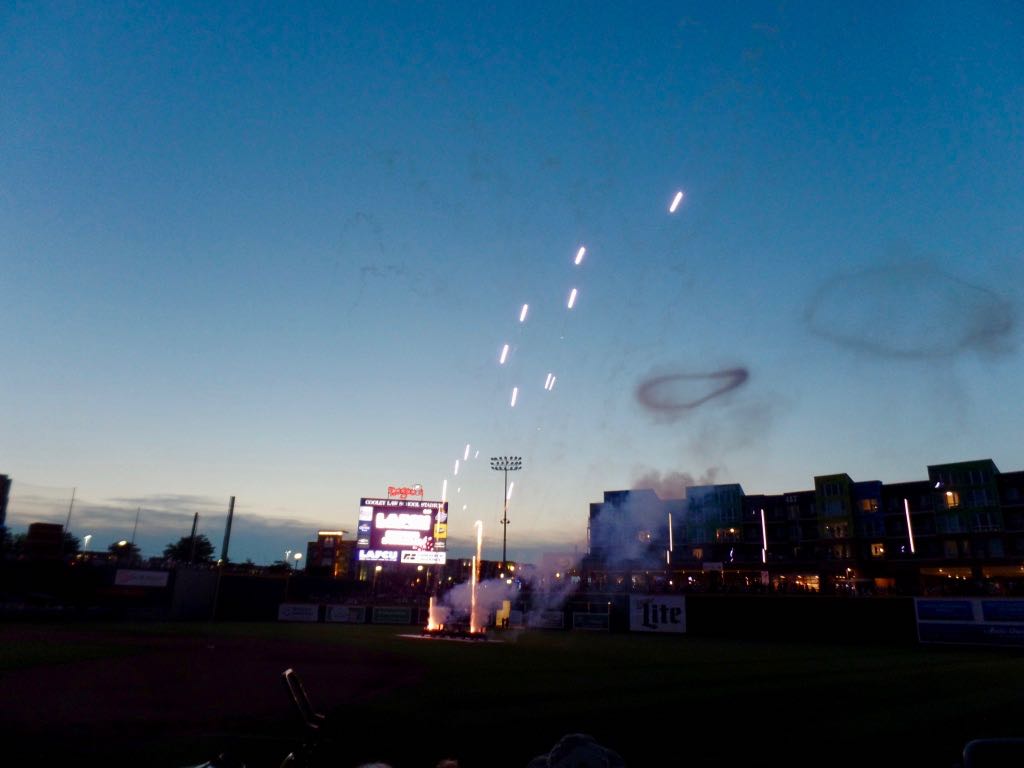 And here's the show starting, not nearly so late as in 2017. There's even some sunlight left in the sky! 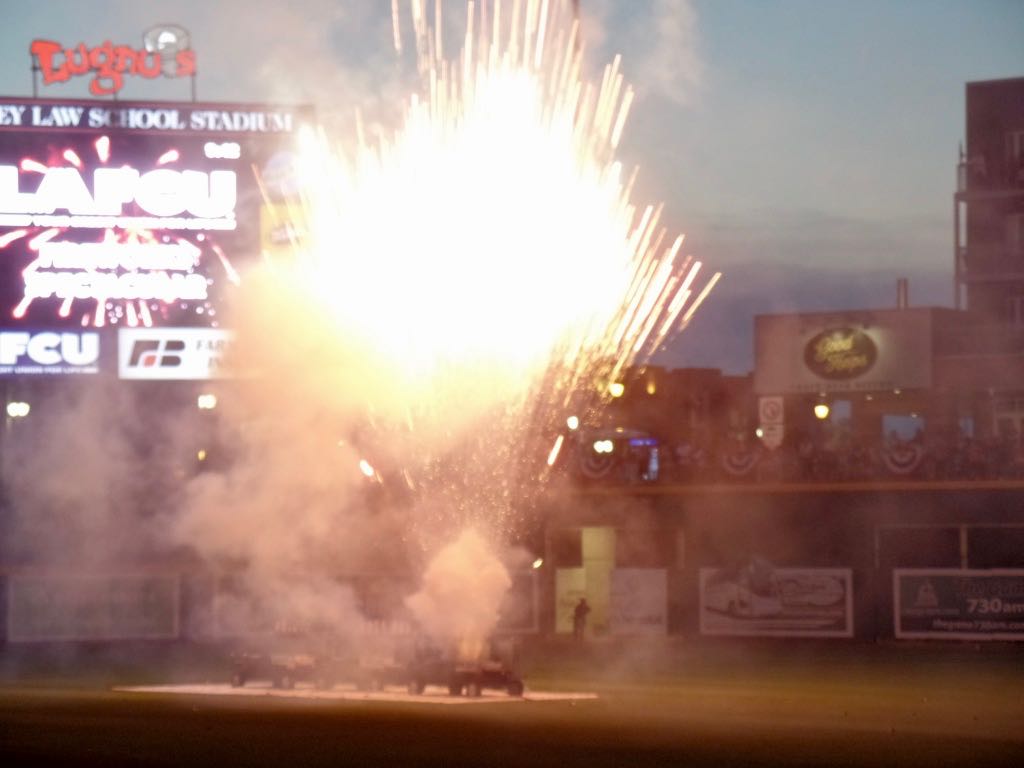 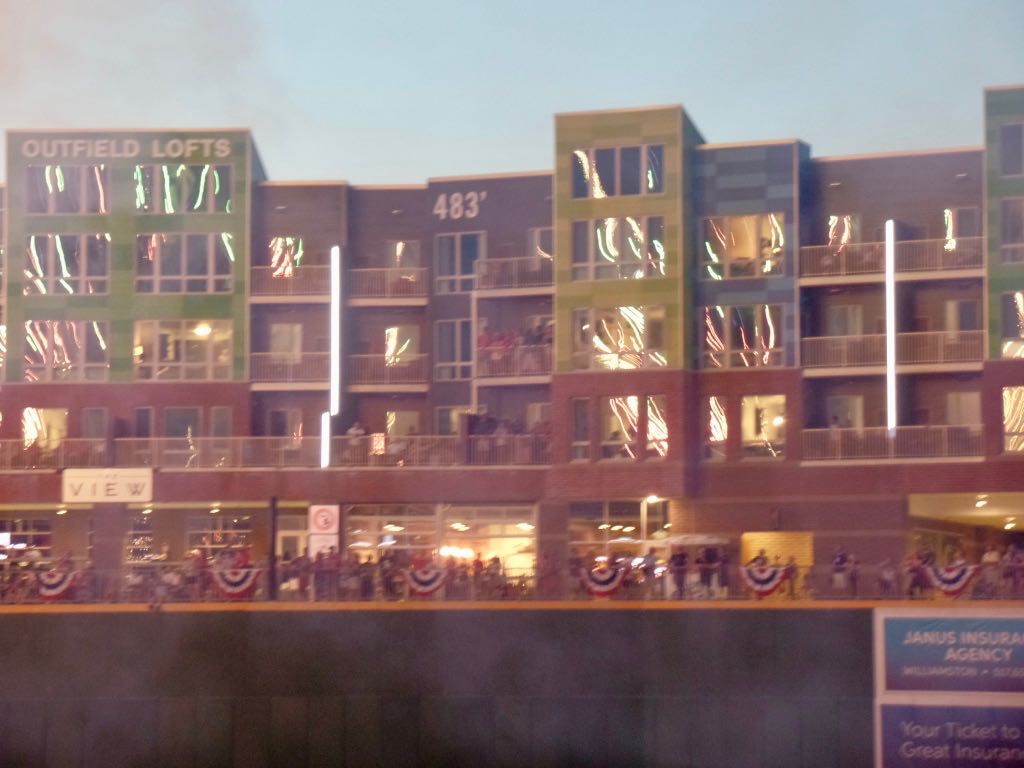 Fireworks seen in the reflections of the windows of the apartments lining the ballpark. The outfield got turned into an apartment building a couple years ago and the windows are supposed to be strong enough to resist a long fly ball. 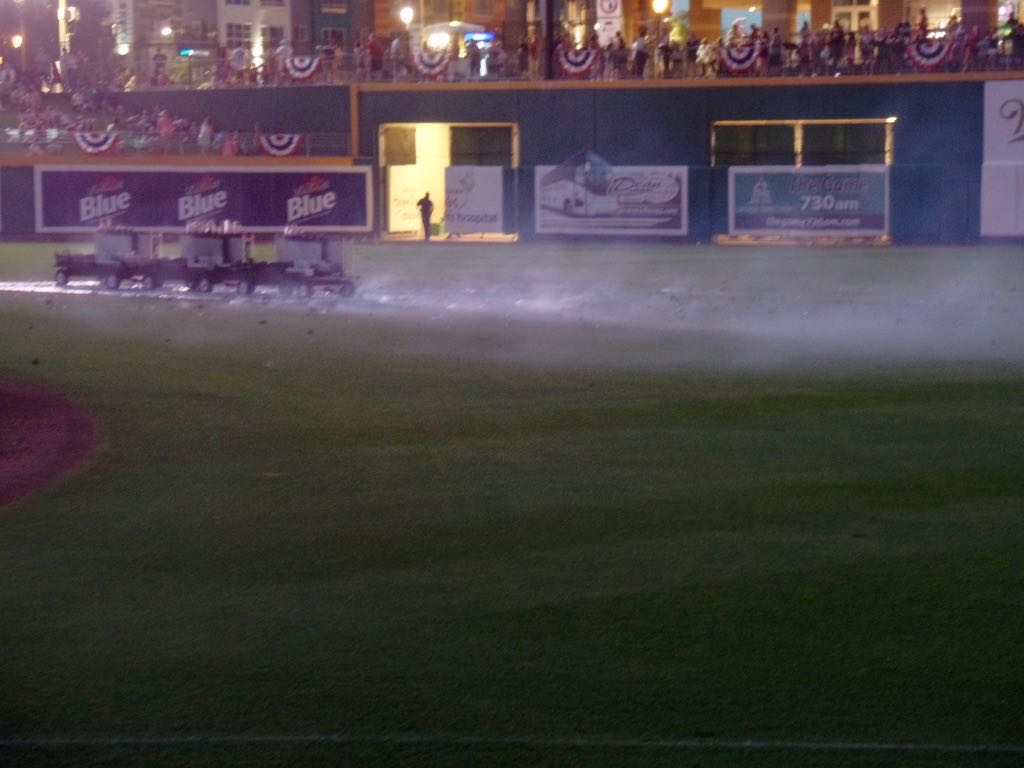 Smoke from the completed fireworks show blowing away. 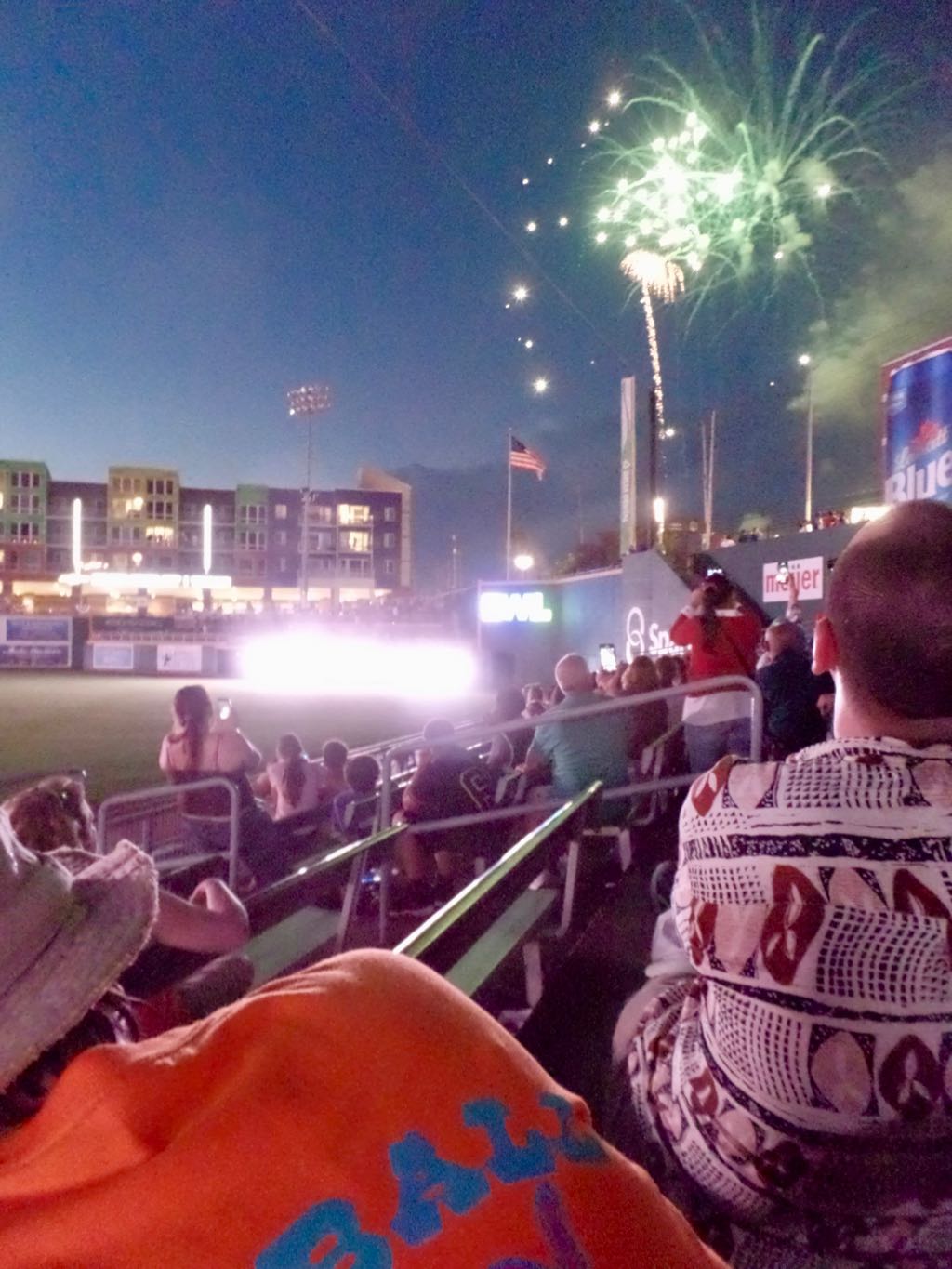 And now the City fireworks begin!

bunny_hugger ducks out of my way. 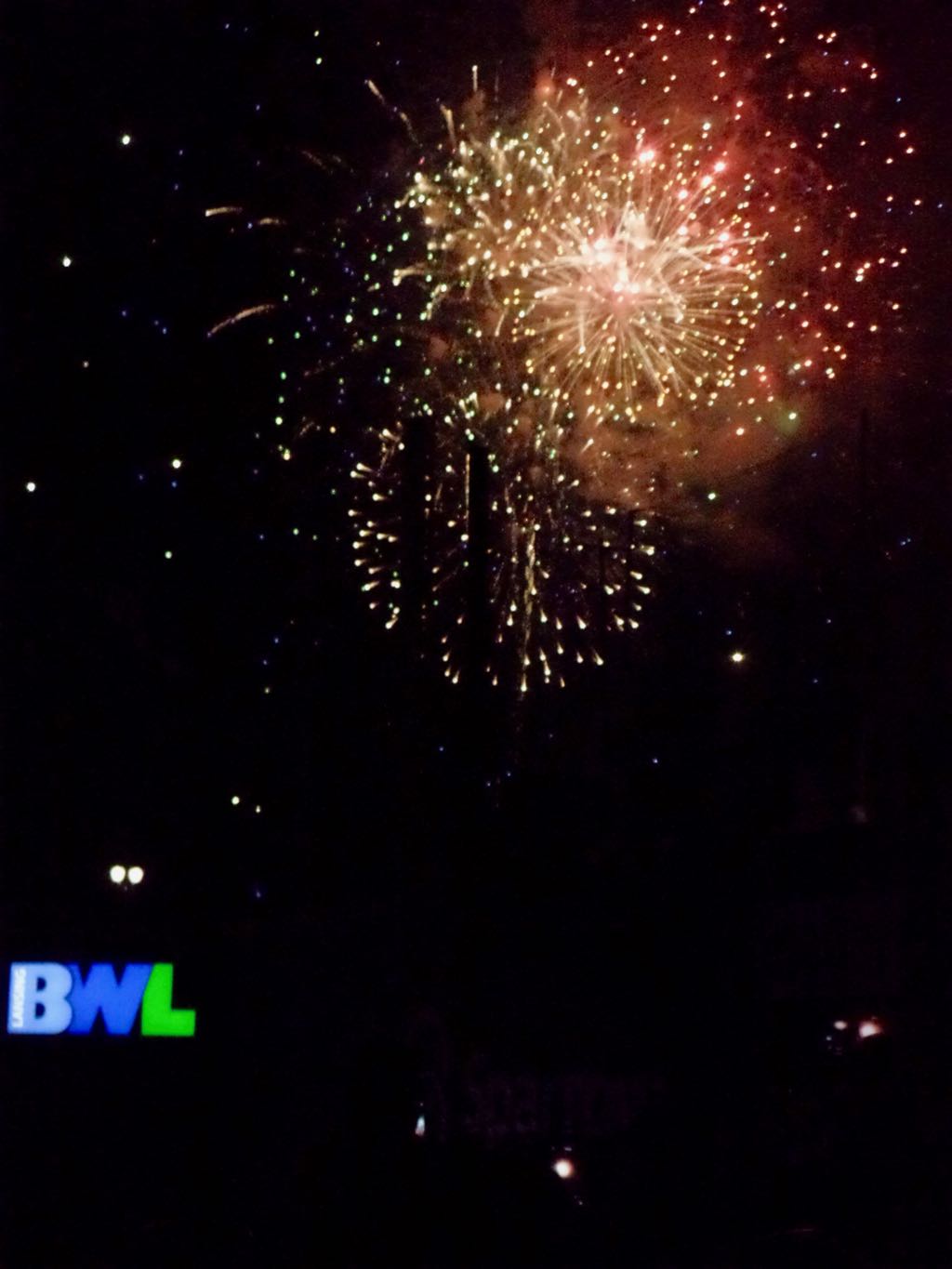 They turned off the stadium lights of we could get a better view of the show. It happens that our seats were ones where the show was kind of at a weird angle, but what were we going to do, move to any of the many open seats with a better view on things? 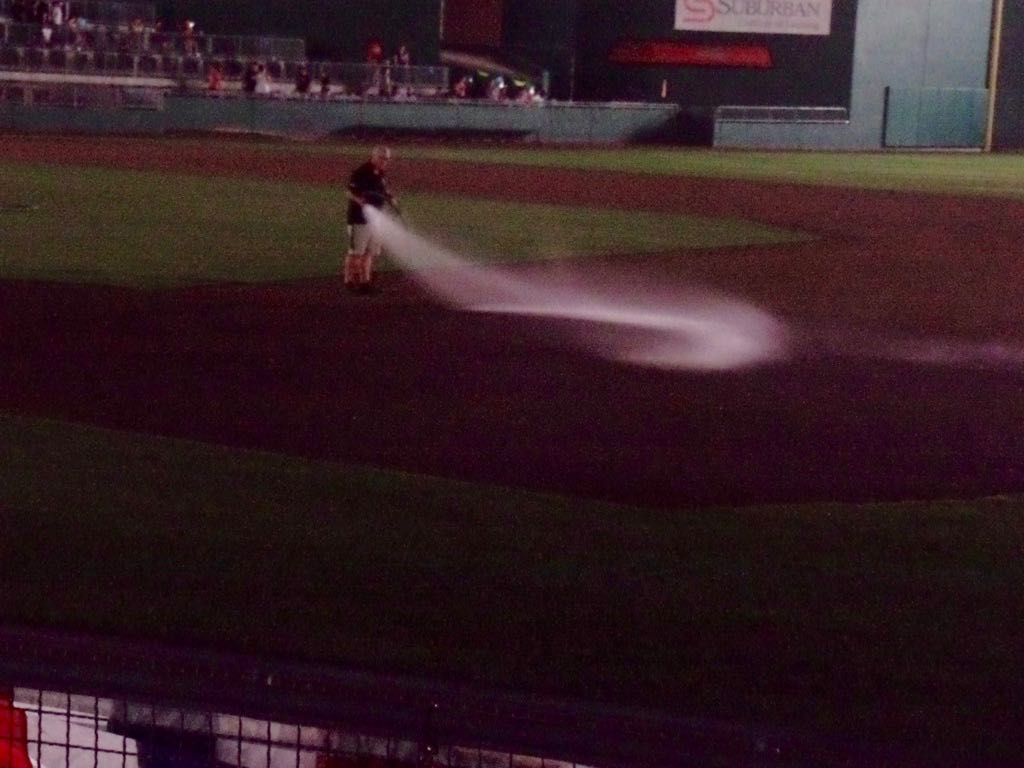 Grounds crew watering down the infield after all the stadium stuff is done.

Trivia: The Xerox copier was originally branded with a capital X at the end, XeroX. Source: Wondrous Contrivances: Technology at the Threshold, Merritt Ierley.

Currently Reading: Perpetual Motion: The Illustrated History of the Port Authority of New York and New Jersey, Joe Mysak and Judith Schiffer. Besides being published in 1997 at least one of the writers was also working for the Port Authority so it's a pretty darned triumphalist history. And confusing in that way histories written by people who aren't historians will be. It'll drop a mention of, like, taking over the Holland Tunnel but not who it was taken over from, or why it was taken over then and not before. Or that there were strong objections to the fourth-area-airport plan but not what they were or how the projects mutated. Also there's talk about a fourth airport being planned for north Jersey, when I know (from John McPhee) there was a 60s plan for a Pine Barrens airport that went nowhere because it would have killed the Pine Barrens, and I don't see a mention of that and I'm wondering if the authors got confused about where the Pine Barrens are.