So. Yeah. Uh. Been a week. I published three things on my mathematics blog since I last did a recap like this, at least, so I'm keeping shockingly close to on pace considering I keep sitting at my computer and staring at it and realizing three hours have passed. This is all good healthy stuff. Anyway here's my recent mathematics posting.

I did not do my comic strip plot recap on Sunday this week. Instead I found a special place to give attention to the 60s Popeye cartoons. Please enjoy a somewhat special feature as Popeye battles Woody Woodpecker for the love of the art world and I notice a mystery in animation history.

What's next in pictures? An alley in Lansing. A friend wanted to get together to hang out a while, and to share just the strange urban beauty he found in this spot near the bar. So let's look. 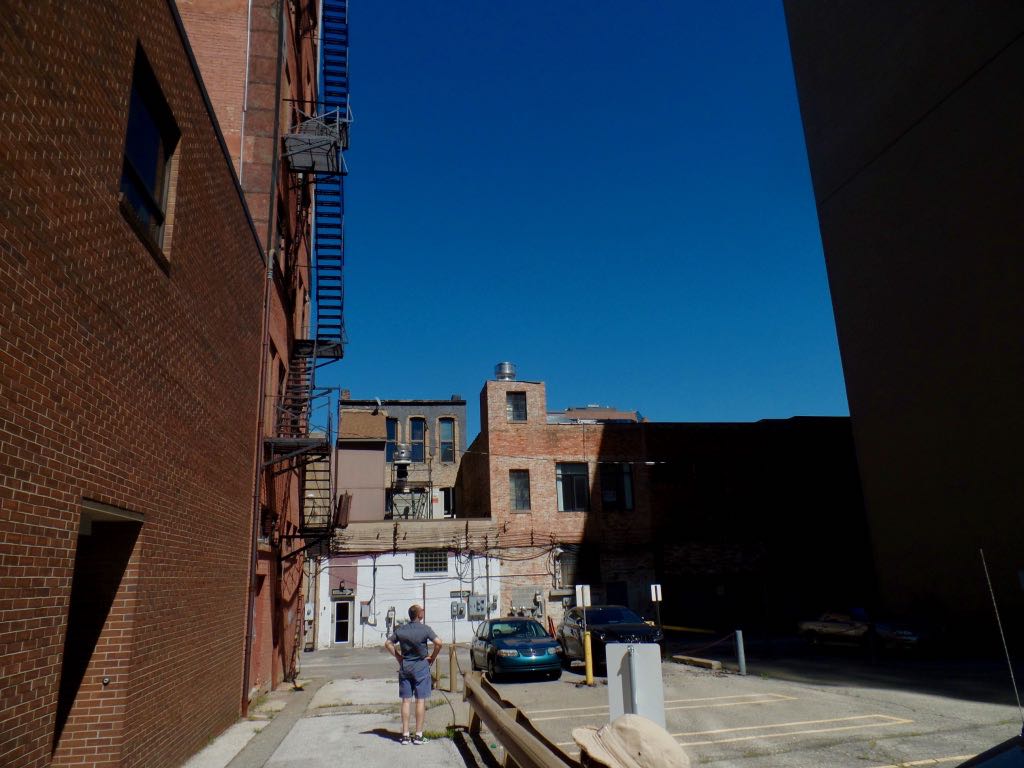 So here's the alley, on incidentally a spectacularly clear blue sky day. It's a fairly old spot in town so the back alleys have got a lot of history in them. 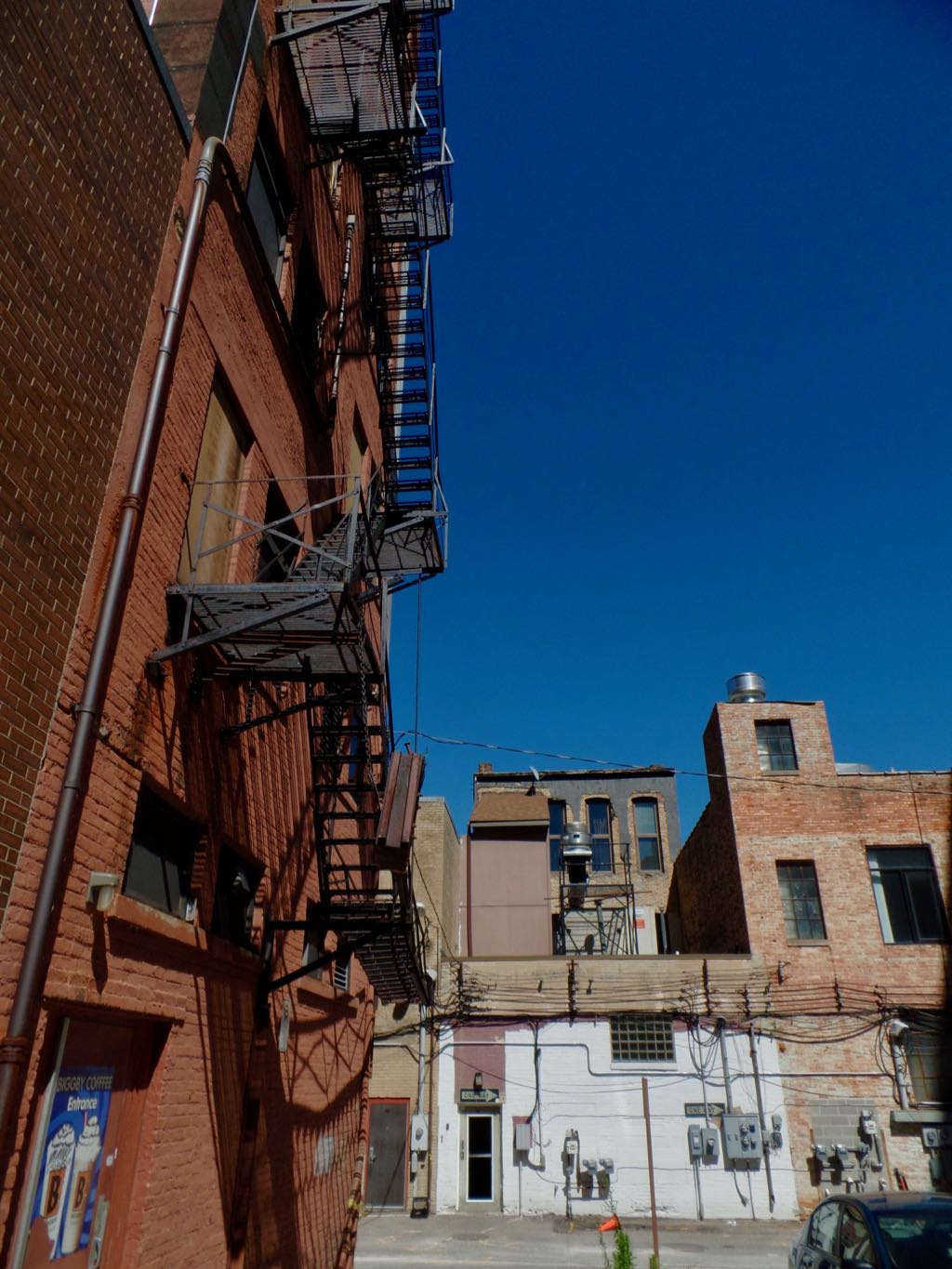 The place didn't have anything particularly scenic about it, just this overgrowth of several generations of building stuff and a lot of straight lines and old brick like this. 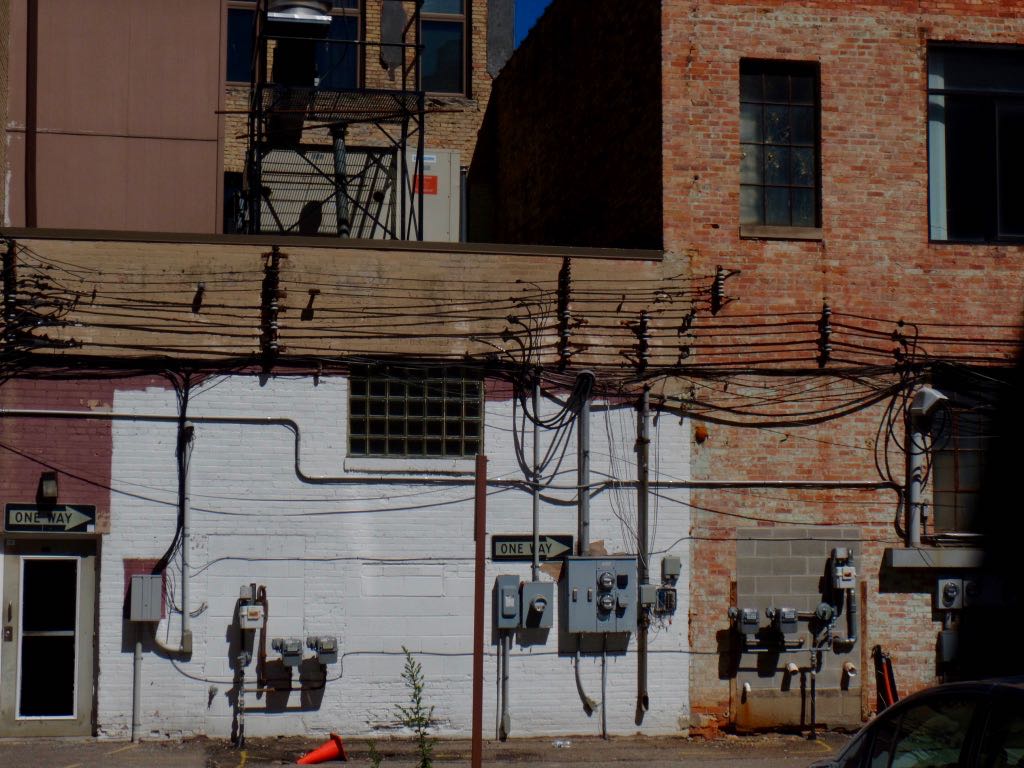 What particularly caught our friend's interest was the complicated net of wires and pipes, all these many straight lines. It's almost a drawing exercise. What caught my eye was how much the transportation department wanted us to know the one way to go. 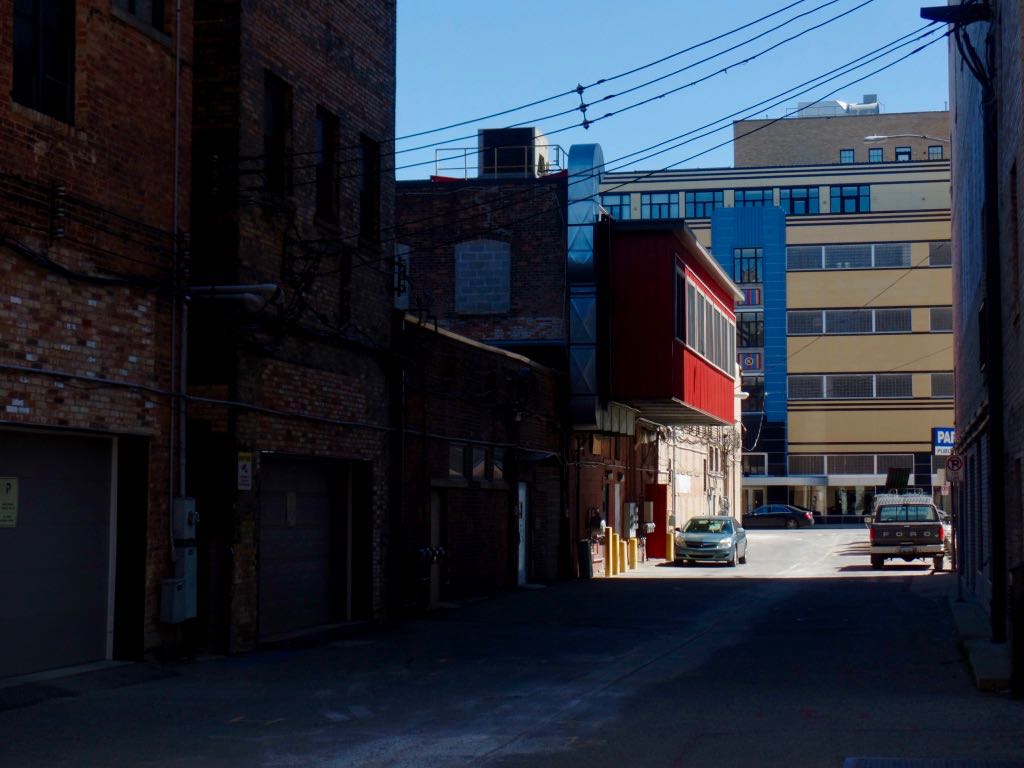 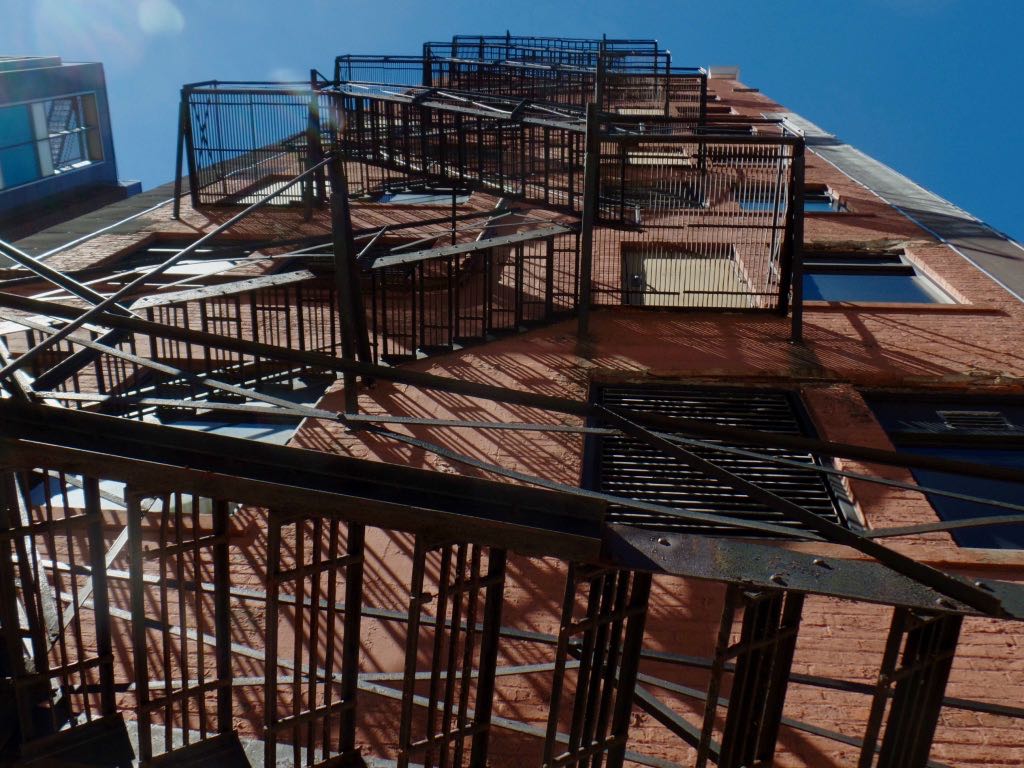 Peering up the wrong end of a fire escape; again, it's just a hypnotic mass of straight lines. 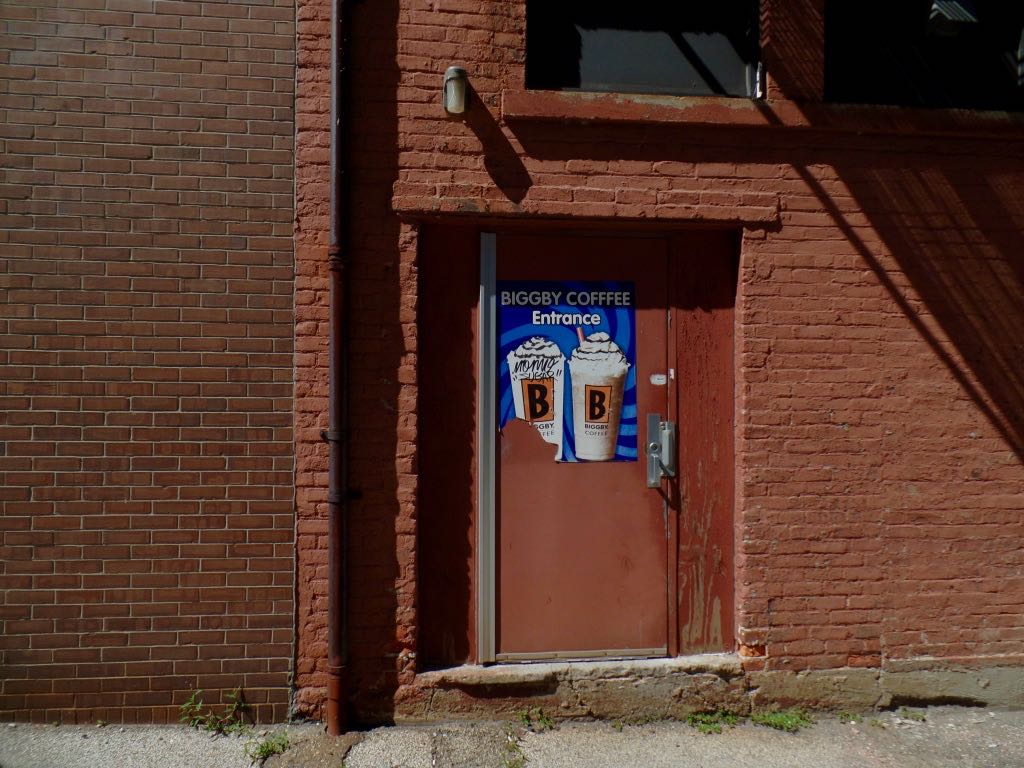 Biggby is the local coffee shop chain, as ubiquitous around here as Starbucks was in jokes about it in the early 2000s. Though this claims to be a legitimate entrance it sure looks sketchy coming in the back door. 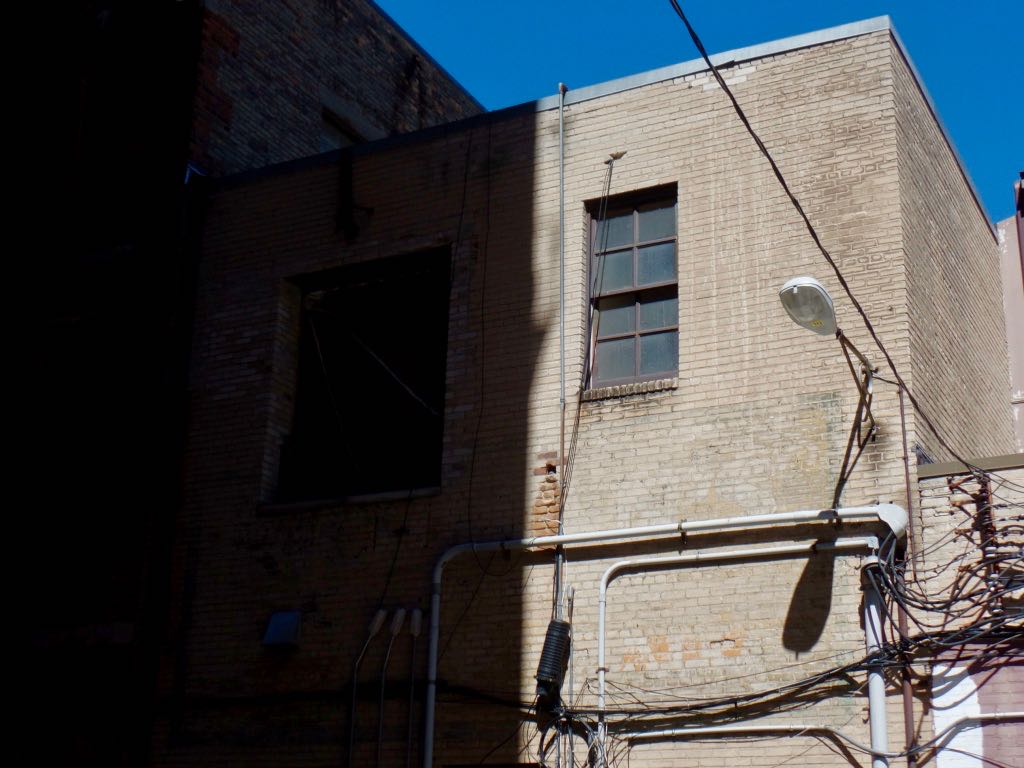 More harsh splitting of the scene between light and shadow. Also check out those PVC pipes that end in a spray of cables. 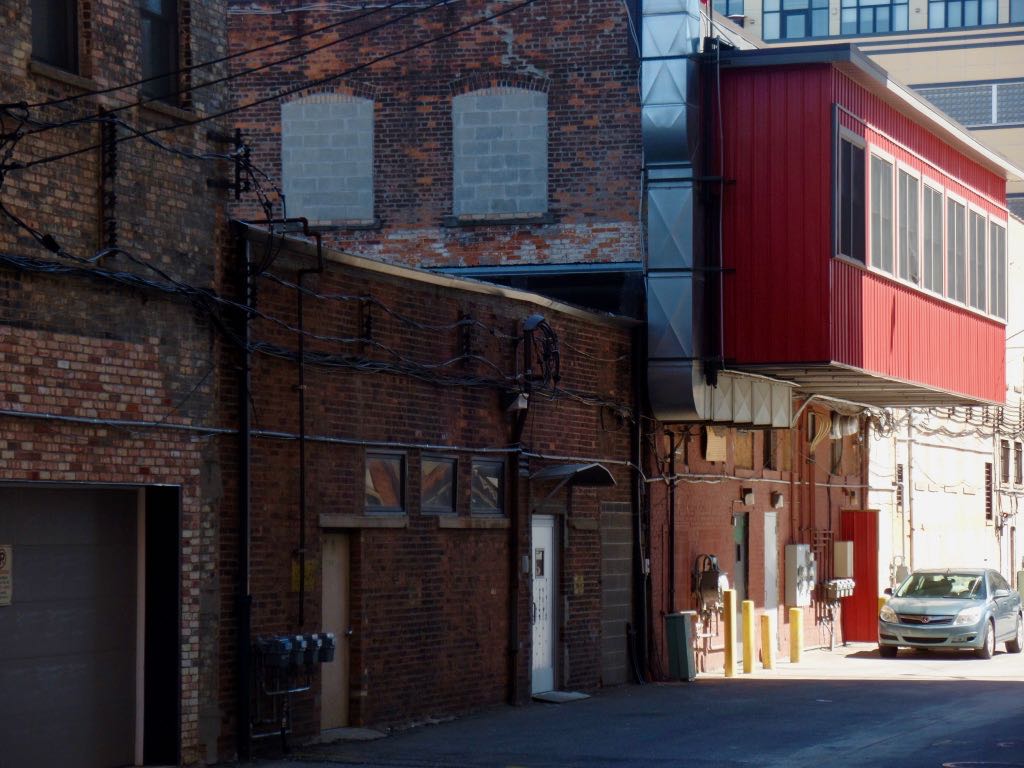 Bunch of things to notice in the two-storey building in back, a bar: first, the ghost windows, long ago covered in cinder block. Second, that the upper floor got extended out back by six feet or so, with that red corrugated-metal overhang and the heating system that goes around the outside, which I'm sure is every bit as good in wintertime as it looks. 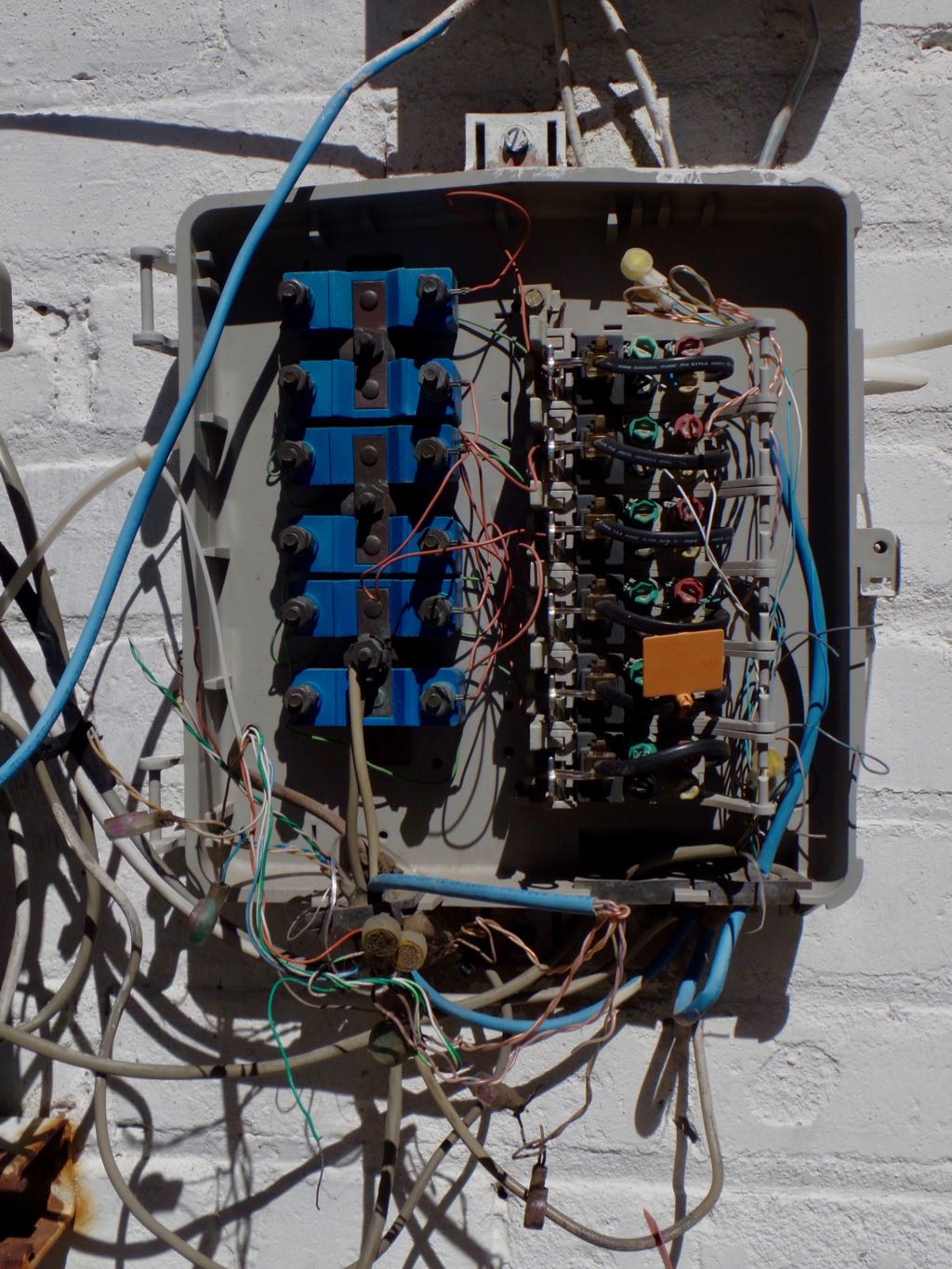 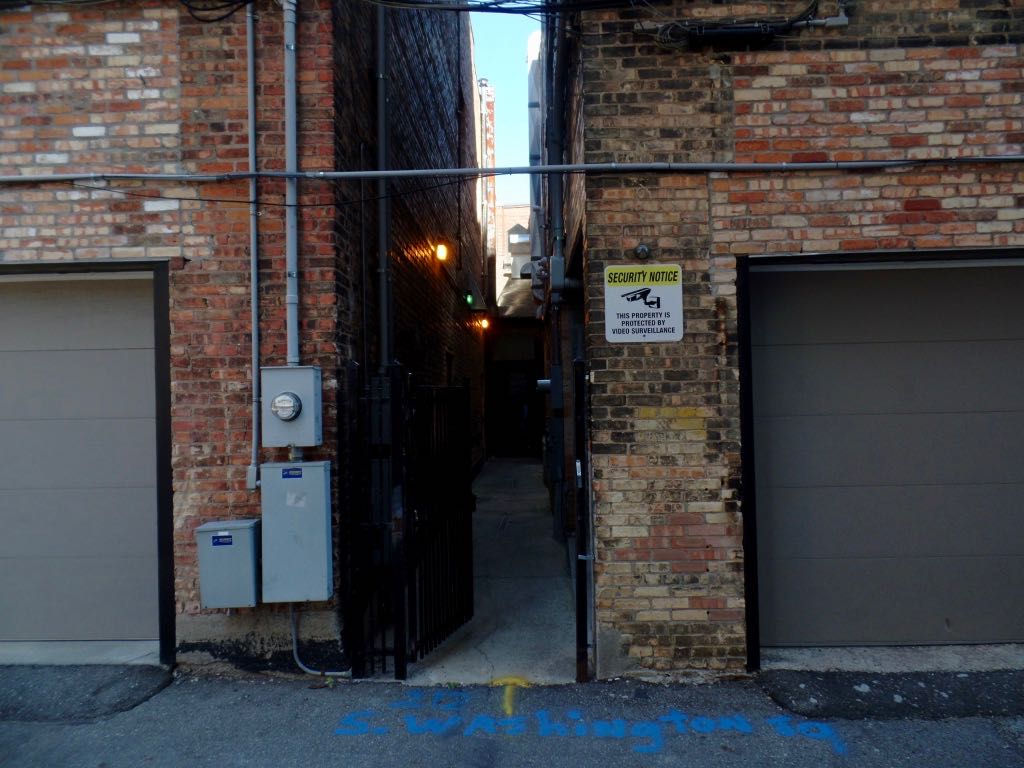 The alley within the alley, and curiously, with the address spray-painted on the ground. 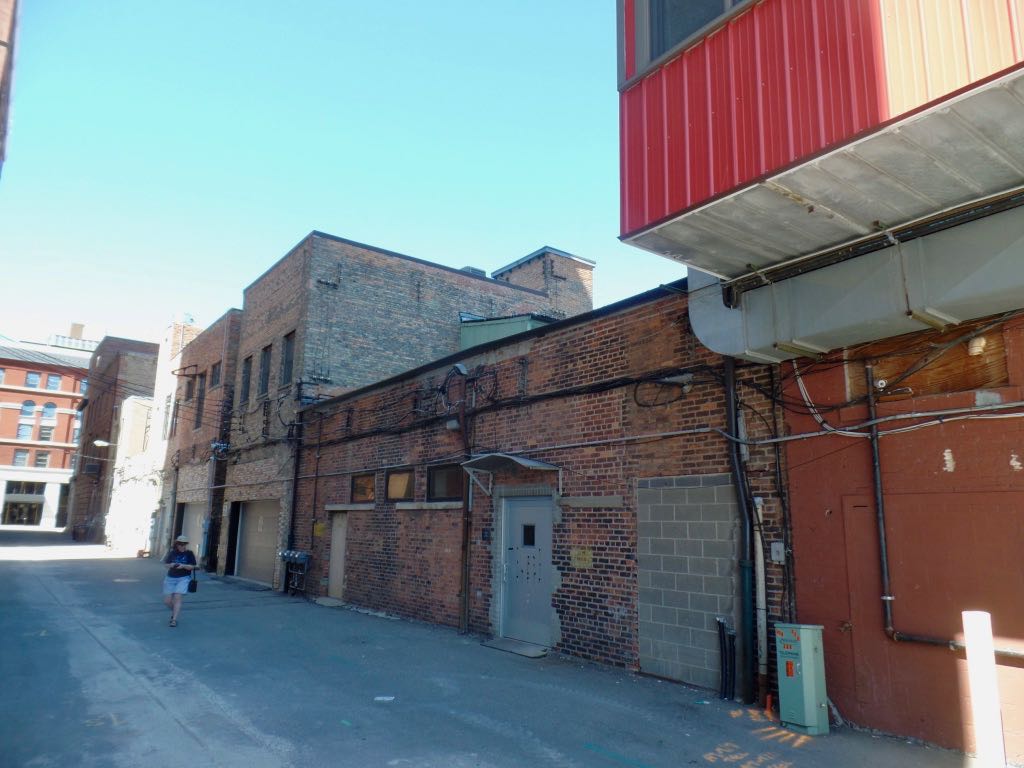 bunny_hugger's album cover from this bunch of pictures, and a view of the bar overhang that's got less intense shading. 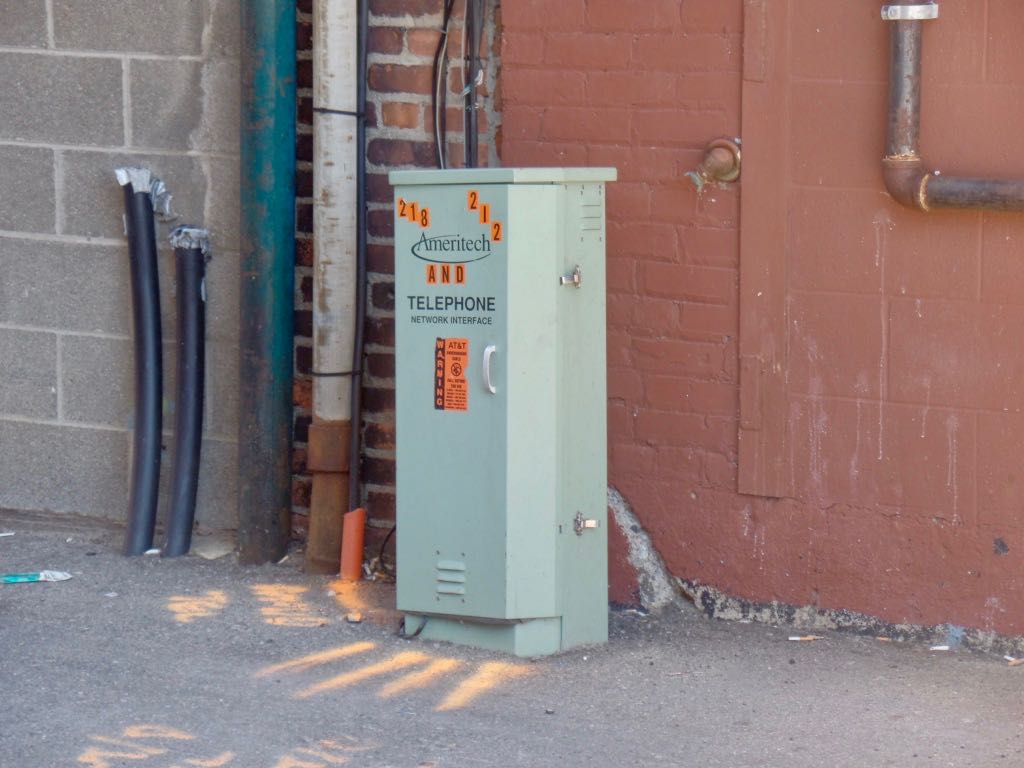 Neat old telephone switching box that still has the Ameritech logo, dating the thing to before about 2003. (Though it's plausible they were still installing older boxes after SBC took the company over) 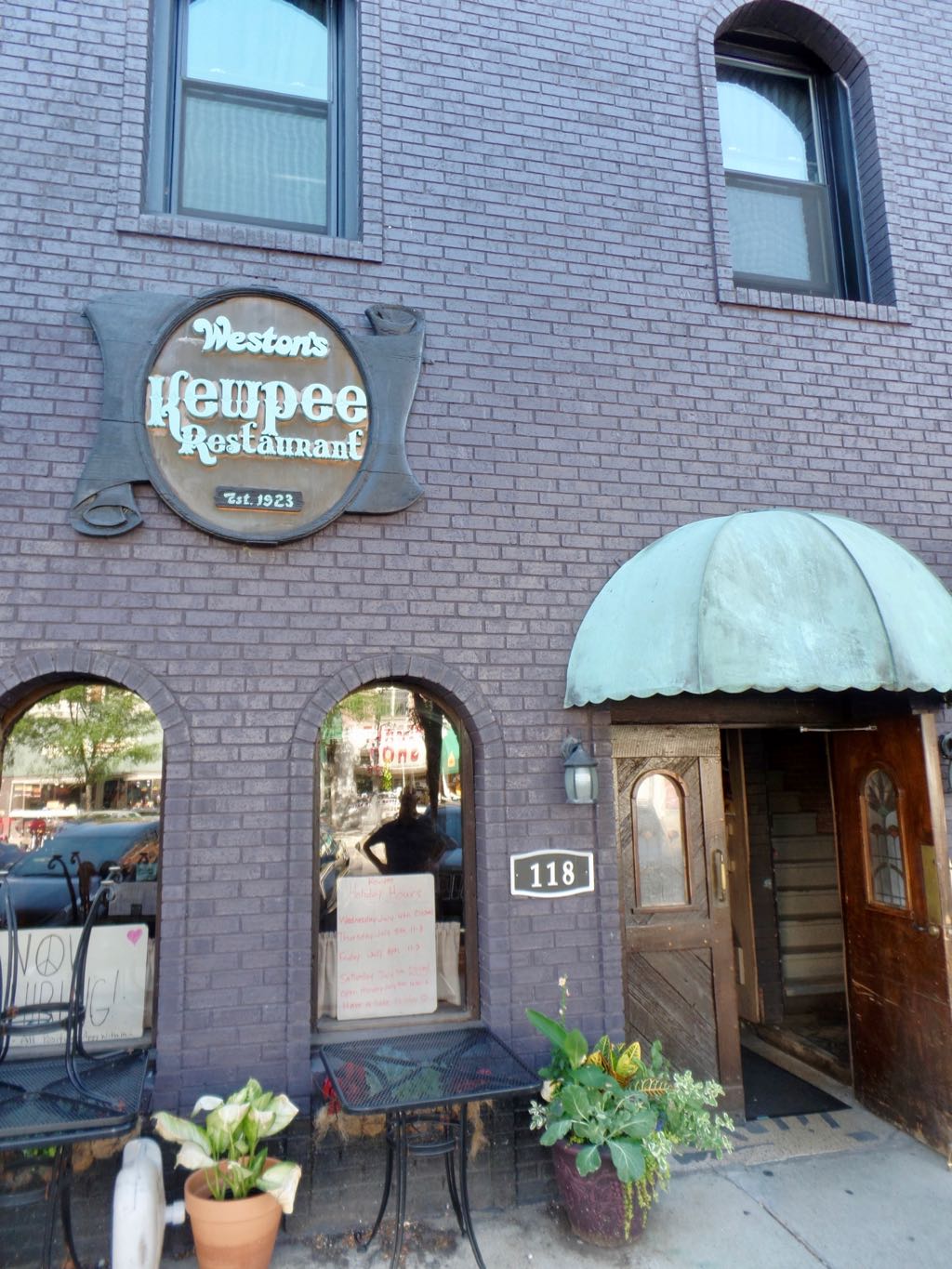 So, Lansing's oldest restaurant is the Weston's Kewpee Restaurant. It's one of the remnants of a former small chain of hamburger places and yes, Kewpee here is as in Kewpee dolls. Inside are a number of bits of memorabilia of the dolls including a bunch of magazine pages from like the 20s with stories about Kewpee land and all that. The restaurant also claims to have invented the olive burger, a Lansing-area thing, a burger with this olive tapenade that's really quite a delight.

Trivia: In 1859 professional balloonist Professor John Wise attempted to carry mail from Lafayette, Indiana, to New York City. His balloon Jupiter failed to catch any wind and ultimately landed thirty miles away from the launch point. Source: Neither Snow Nor Rain: A History of the United States Postal Service, Devin Leonard.

Currently Reading: In Darkest South Carolina: J Waties Waring and the secret plan that sparked a civil rights movement, Brian Hicks. A Christmas-gift book that I turned to because the libraries are closed and I guess I wanted to read something happy and pleasant and not at all infuriating so sure, let's stare hard at the civil rights situation in South Carolina in 1946, right? ... But it is rather pleasantly written, and the focus is about a white guy born into a privileged part of Charleston society, who worked his way into a position of power as Federal judge, and realized that since he believed in America's proclaimed ideals he had to rule segregation anti-American.