I've got some money 'cause I just got paid

Otherwise today was quiet. We were able to watch The Price Is Right and the noon news in their entirety without a breaking-news alert get in. So that's a nice change of pace.

Our next big event was the Rocket Robin pinball tournament, at our local hipster bar. So here's some of my few pictures of the event. 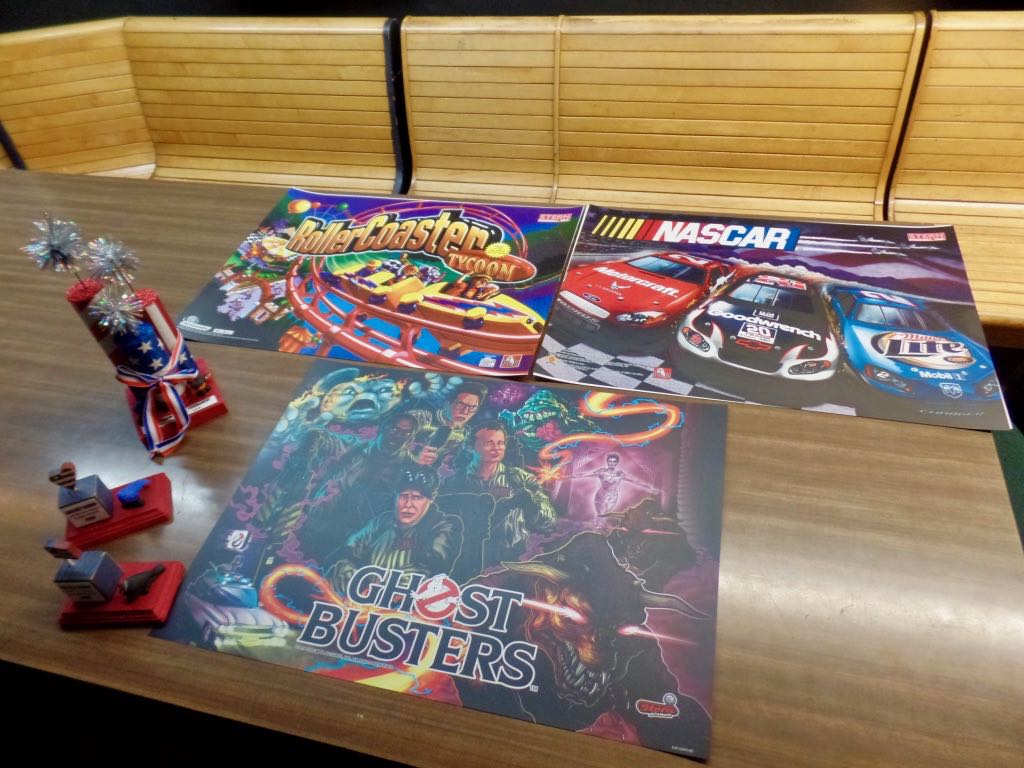 A spread of prizes.

bunny_hugger made the trophies to the left. The large posters are translites, art that fits into the vertical backglass of pinball machines. Ghostbusters is in fair demand, even though a lot of people hate the game because it's quite difficult and unforgiving. Roller Coaster Tycoon is ... not in high demand, nor is Nascar. But Stern sends these translites out whenever

bunny_hugger says we need more to give away. 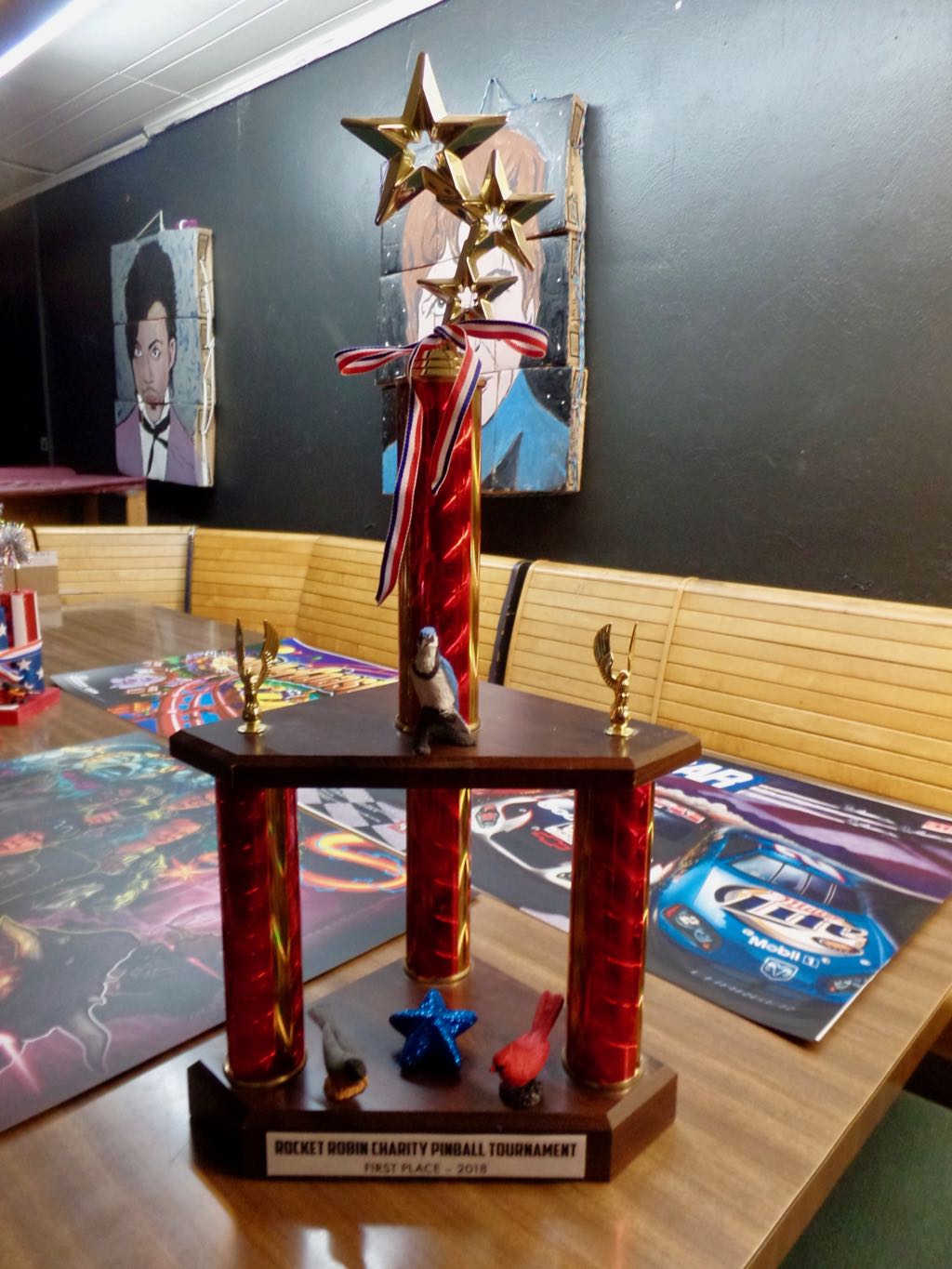 The grand prize! A trophy

bunny_hugger repurposed from GRV's collection of past wins. Also on the wall in back you can see the kind of art that decorates the place, and that they do sell in circumstances I don't understand. 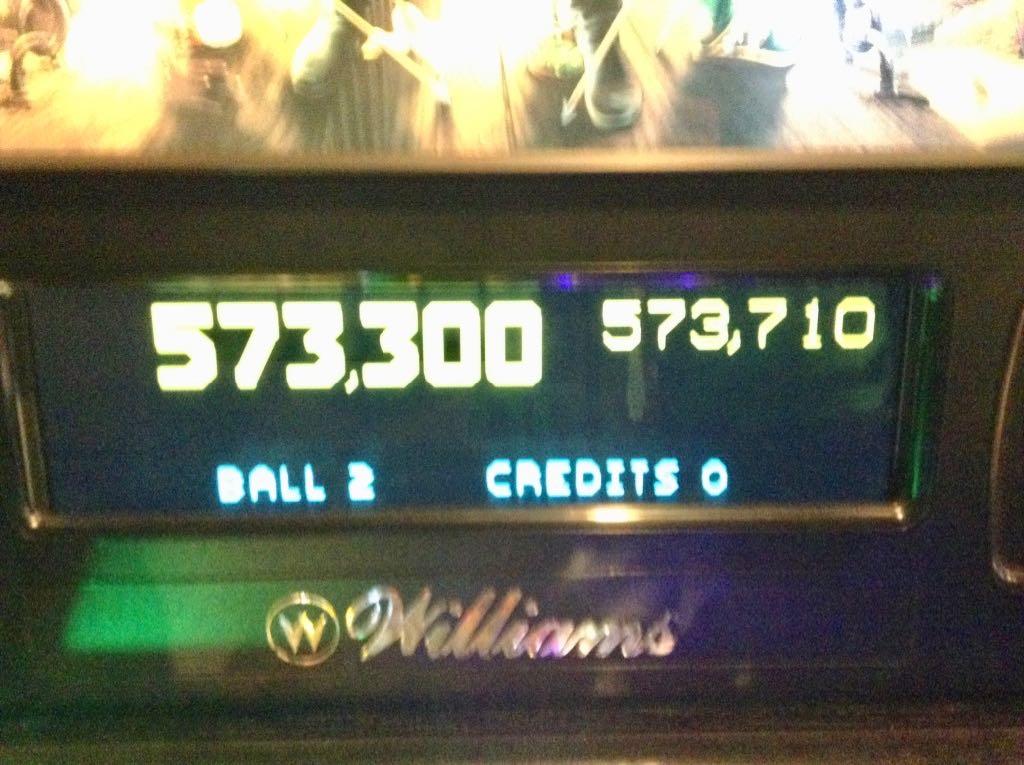 After one ball of Medieval Madness we had to pause and ask whether the competitors were plagiarizing one another. 573,000 is by the way a surprisingly poor one-ball score on Medieval Madness, particularly for players of the caliber we had at Rocket Robin. That two people would have the same dismal score is a bit wild. 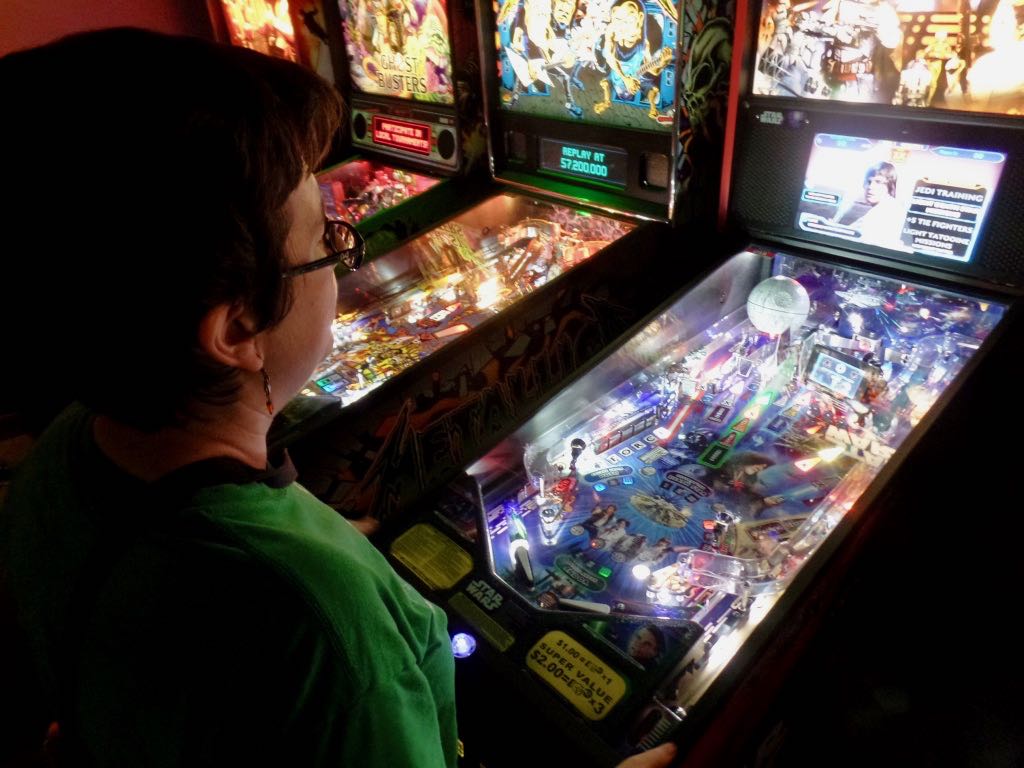 bunny_hugger pondering the question; do I really want to be playing the Stern Star Wars? No, she never wants that, but sometimes, she's got to. 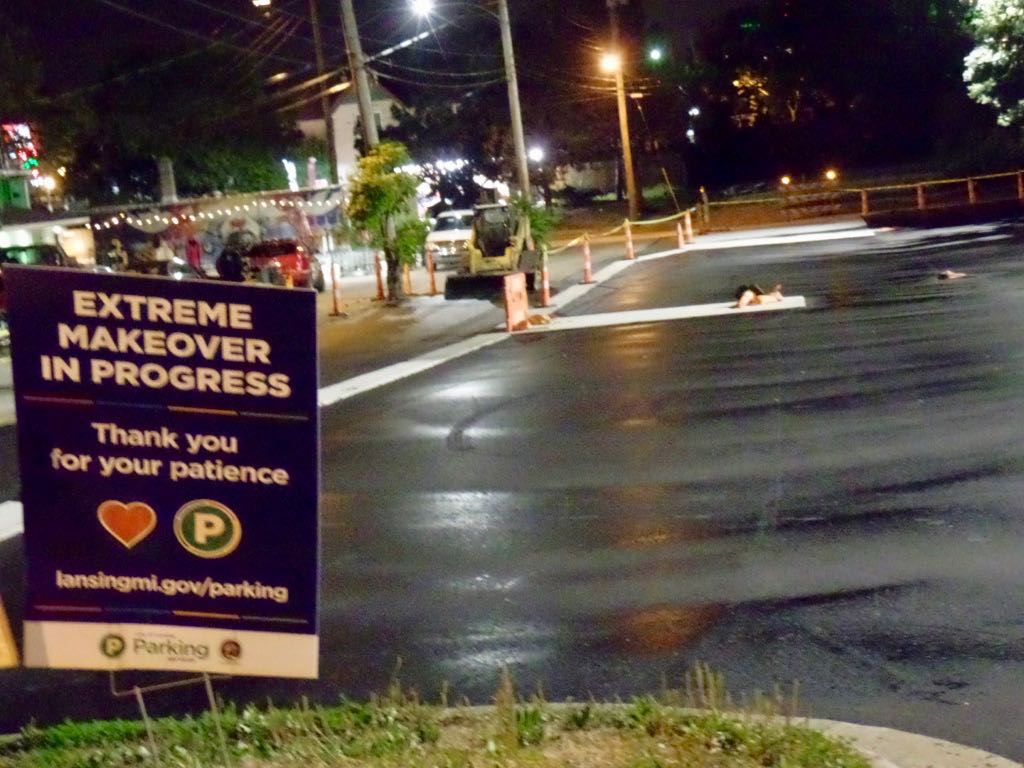 Coincidentally, around the time of the tournament, the City of Lansing repaved the moonscape that had been the parking lot out back of the place. You can see the area roped off while the pavement sets. I took a picture of the lot being the smoothest it would ever be. It was only about a month ago they reinstalled the parking meters.

And now, here's some pictures of Penelope when we knew she had cancer, and were medicating her ahead of her surgery. This includes particularly subcutaneous injections of fluid, and how we managed to get a grumbly rabbit to sit still while we poured saline fluid into her back. 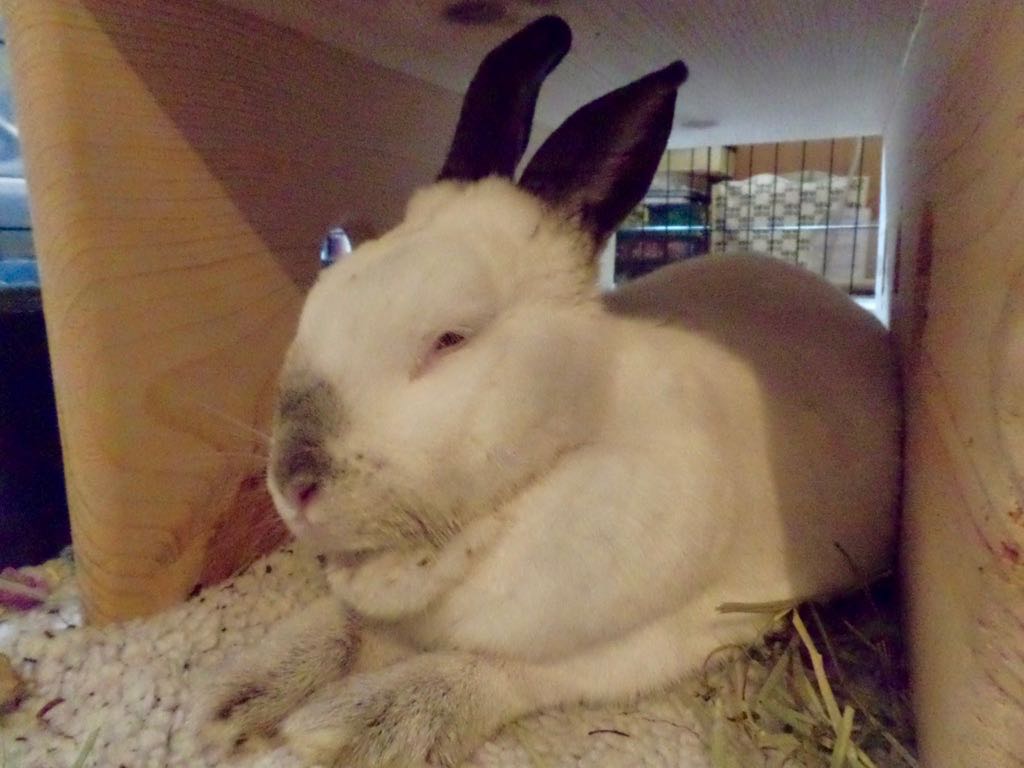 Penelope would sprawl out under this small wooden tunnel as a way to feel nicely sheltered and keep from being bothered by the likes of me. 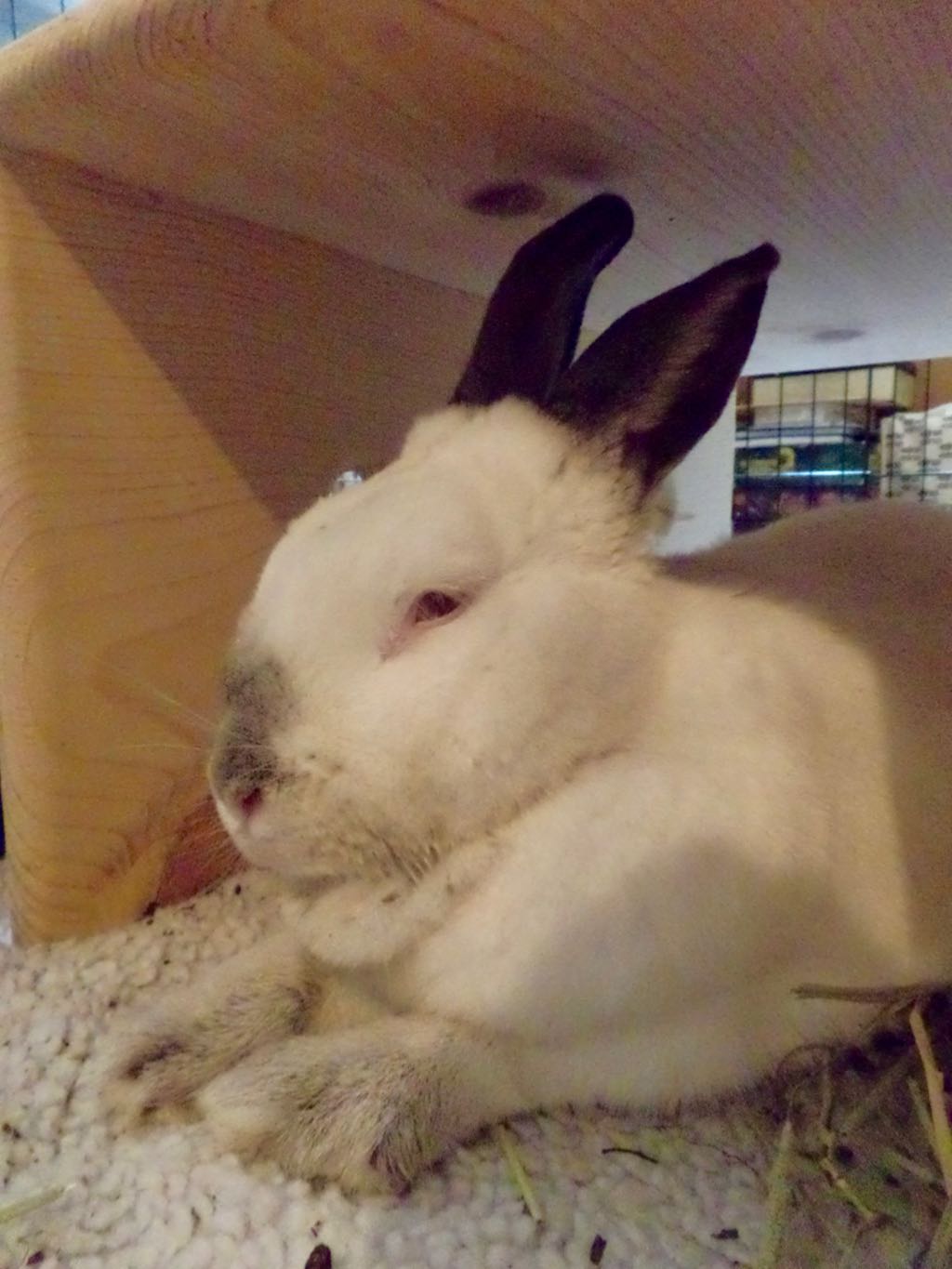 She's noticed I'm up to something, though, and is considering whether to try running or to just slug me. She was a very punch-y rabbit. 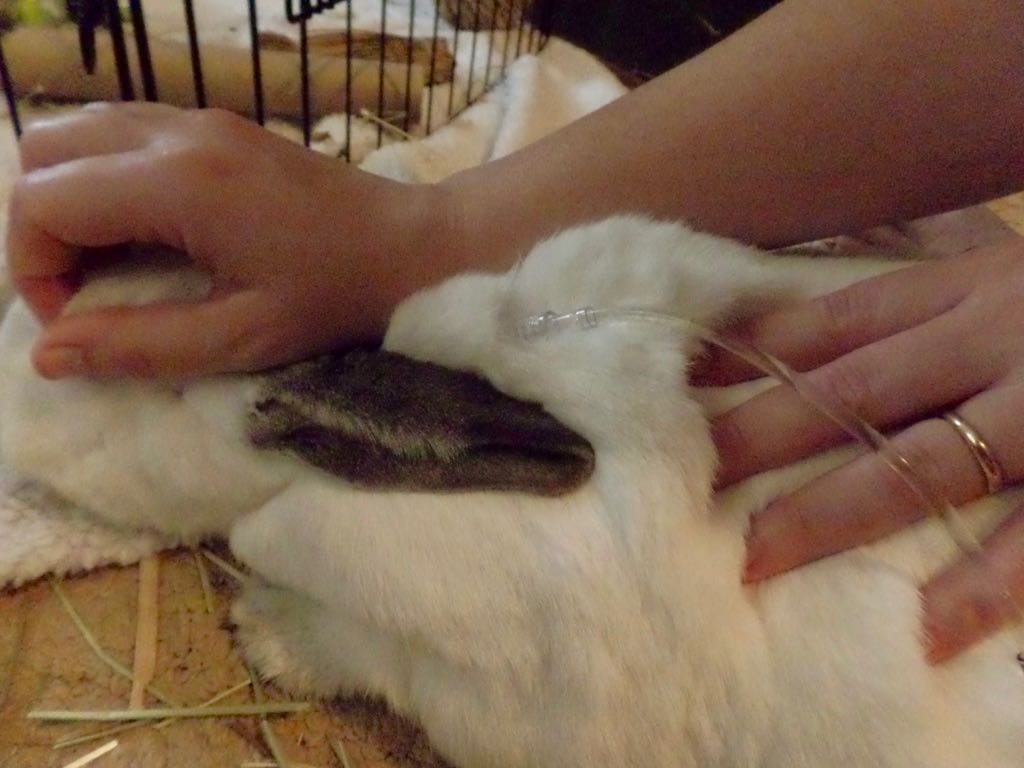 OK, so this looks worse than it is. What

bunny_hugger is mostly doing is brushing Penelope's head, as rabbits regard being groomed as a sign of deference and acknowledgement of their greatness, and like their heads and ears being groomed most of all. (Your rabbit may vary, but if you don't know what a rabbit likes, head-pets and ear-pets are usually right.) Covering the eyes also seems to assure them that everything is fine, they're safely sheltered, it's all right. The intravenous tube there went into some of the very loose skin on the rabbit's back; they have a lot of loose space there, and it's not very sensitive. So we jabbed a needle in there, and poured a saline solution in, which would just sort of flow around until her body absorbed it. 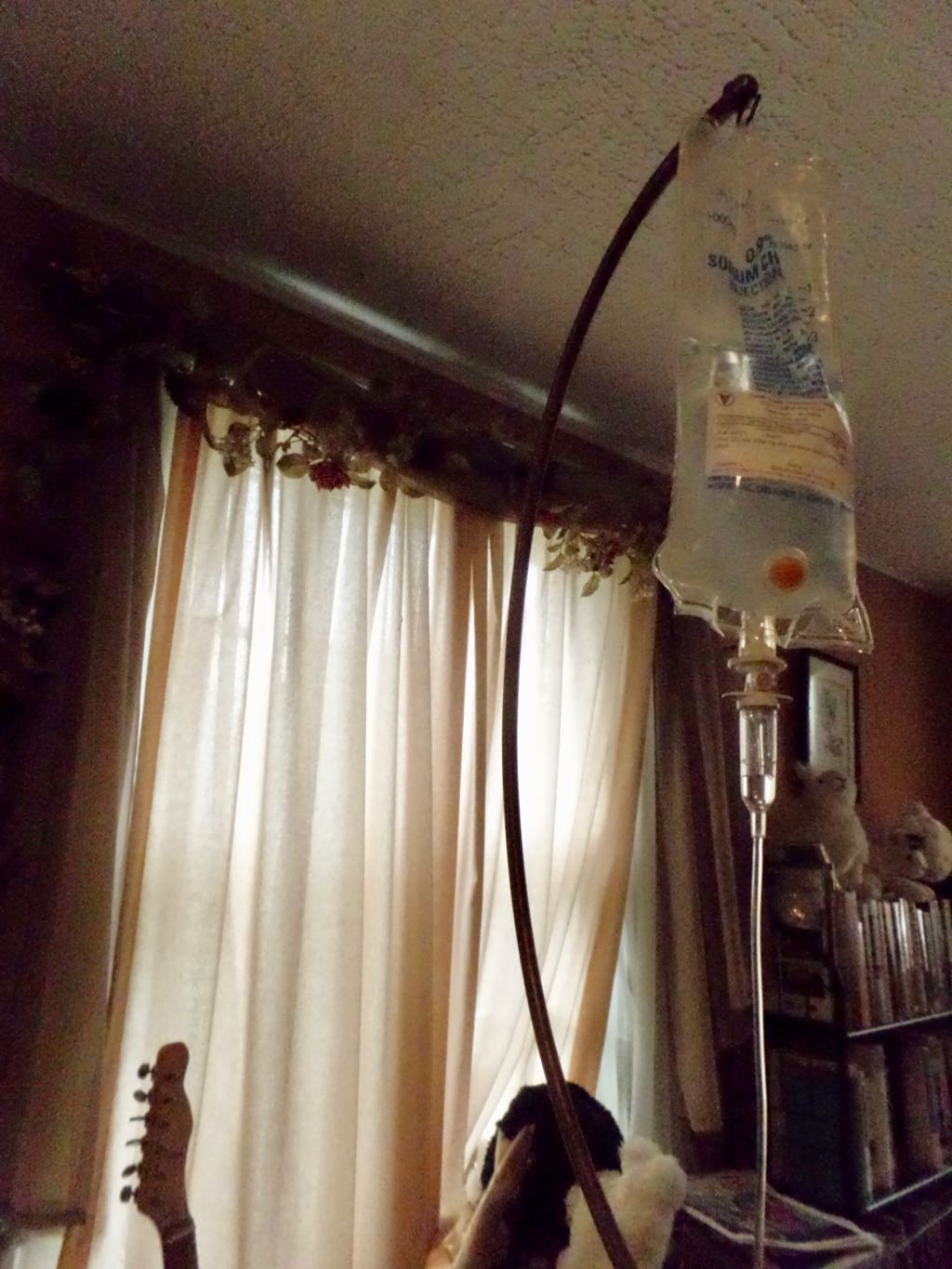 Our sub-Q fluids stand, which when it's not pressed into rabbit medical care holds a decorative birdcage. It's pretty good for holding bags of fluid too. 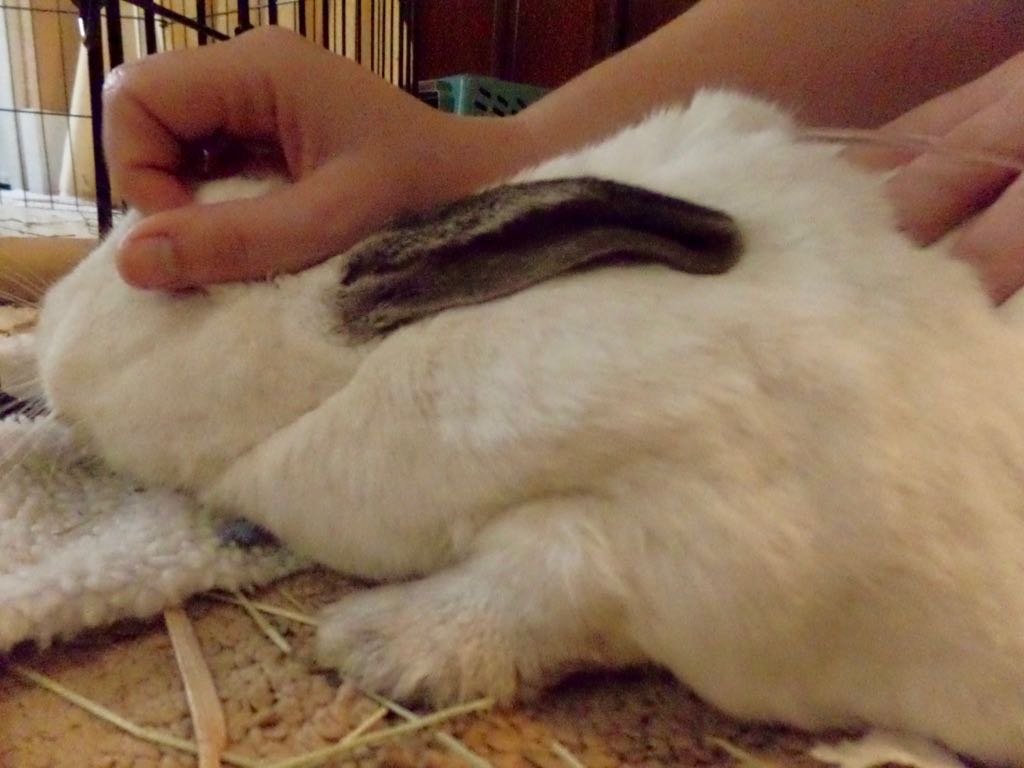 So all we needed was a couple of minutes where Penelope wouldn't run away; this could be helped by petting her the more urgently. Again, this looks rough, but rabbits have a lot of fluff and you can press a lot into them before you touch skin.

Trivia: Standard [Oil] of New Jersey, which had a hundred million dollars in annual profits before the Crash of 1929, had profits of under US$300,000 in 1932. Source: Great Fortune: The Epic of Rockefeller Center, Daniel Okrent.