I won't forget a single day, believe me

So today's pictures are going to be fewer, and harder. They're the last ones we got of Penelope before bringing her in for the surgery she didn't survive. I'm sorry to put this on you in a week that nothing good is going on, but we didn't have enough time with her, and I don't want to begrudge her this. None of these pictures show anything too particularly graphic. I guess I could have taken more at the time, but Penelope wasn't in much mood to do anything different, and we had figured that after her surgery there'd be more with her. 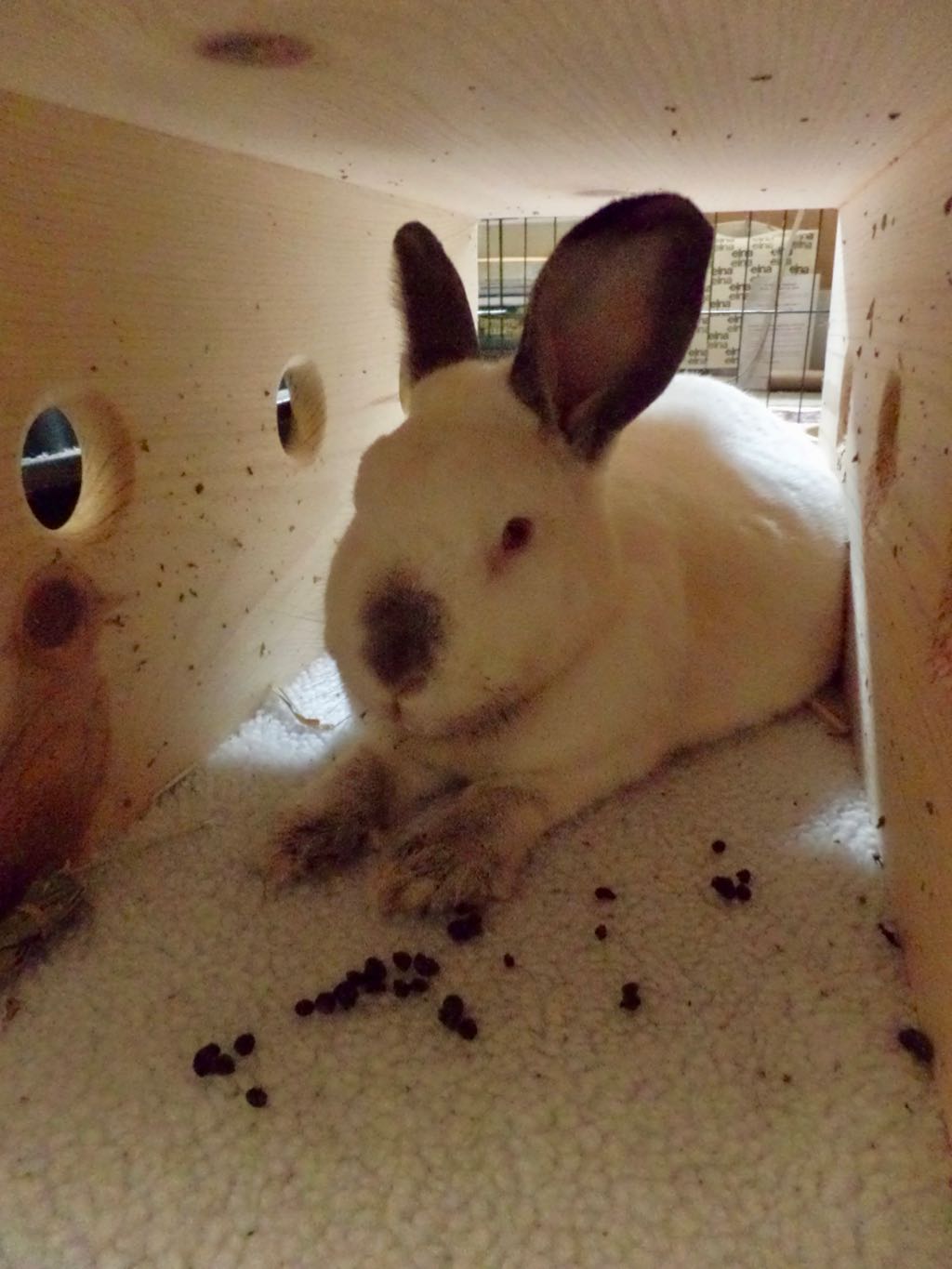 Penelope hiding in her wooden tunnel. The black spots around her are, yeah, droppings. Worse, they're small, malformed droppings, which are always a warning sign of great trouble in a rabbit. A healthy rabbit has pretty uniform droppings, and will usually leave them in a chosen toilet spot (their choice, not yours) or wherever it is they keep eating hay. So what had looked like her just being fussy about her vegetables turned into a veterinarian visit when we had seen those, a couple weeks earlier. 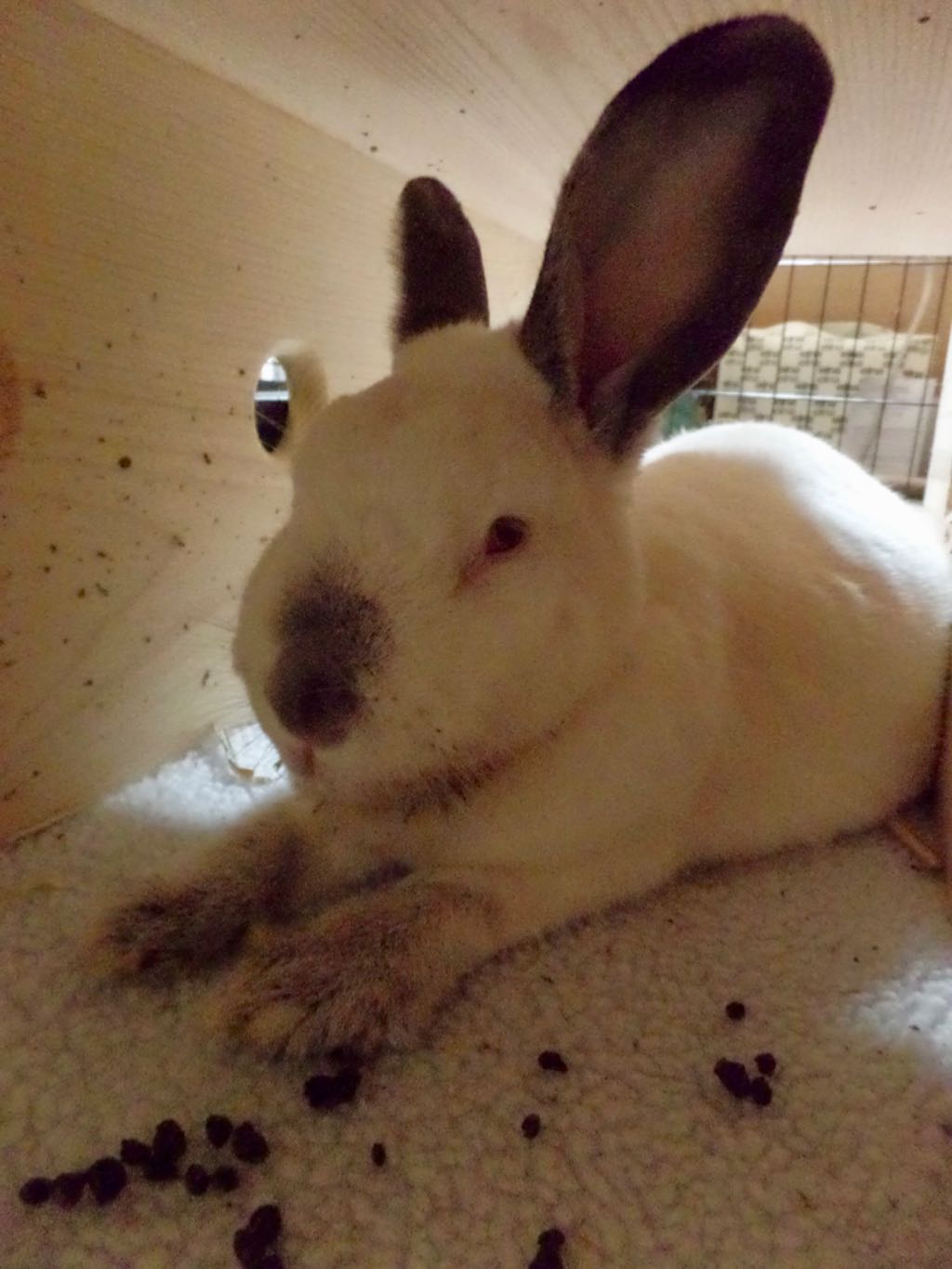 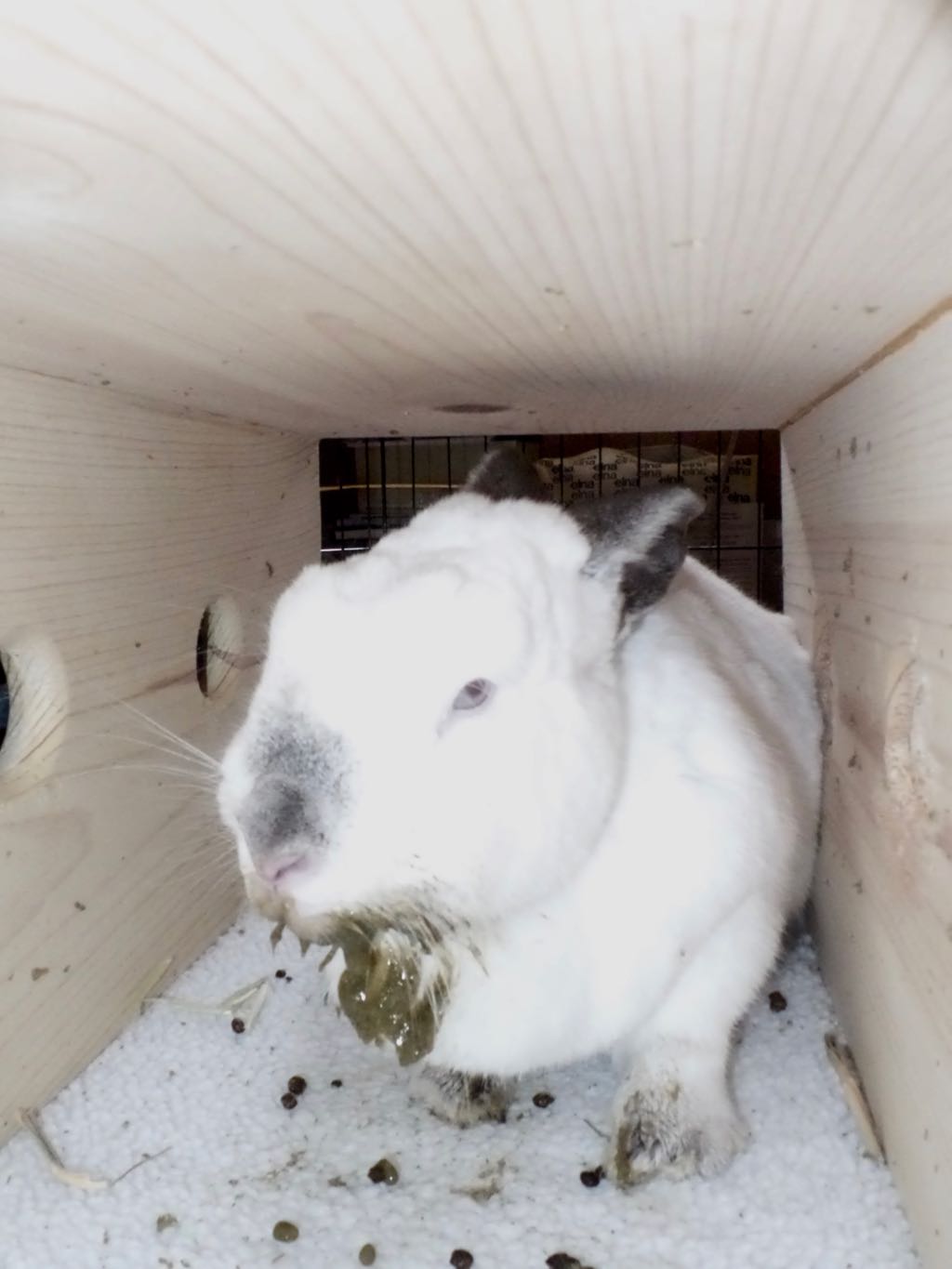 Force-feeding a rabbit is best done fast, though, and with one person holding the rabbit and the other doing the feeding. So there's no pictures of that process. Here, though, you can see the aftermath. Note the ears folded back, the warning sign that she is going to get me for this, compared to her curious and exploring ears in the previous couple pictures. 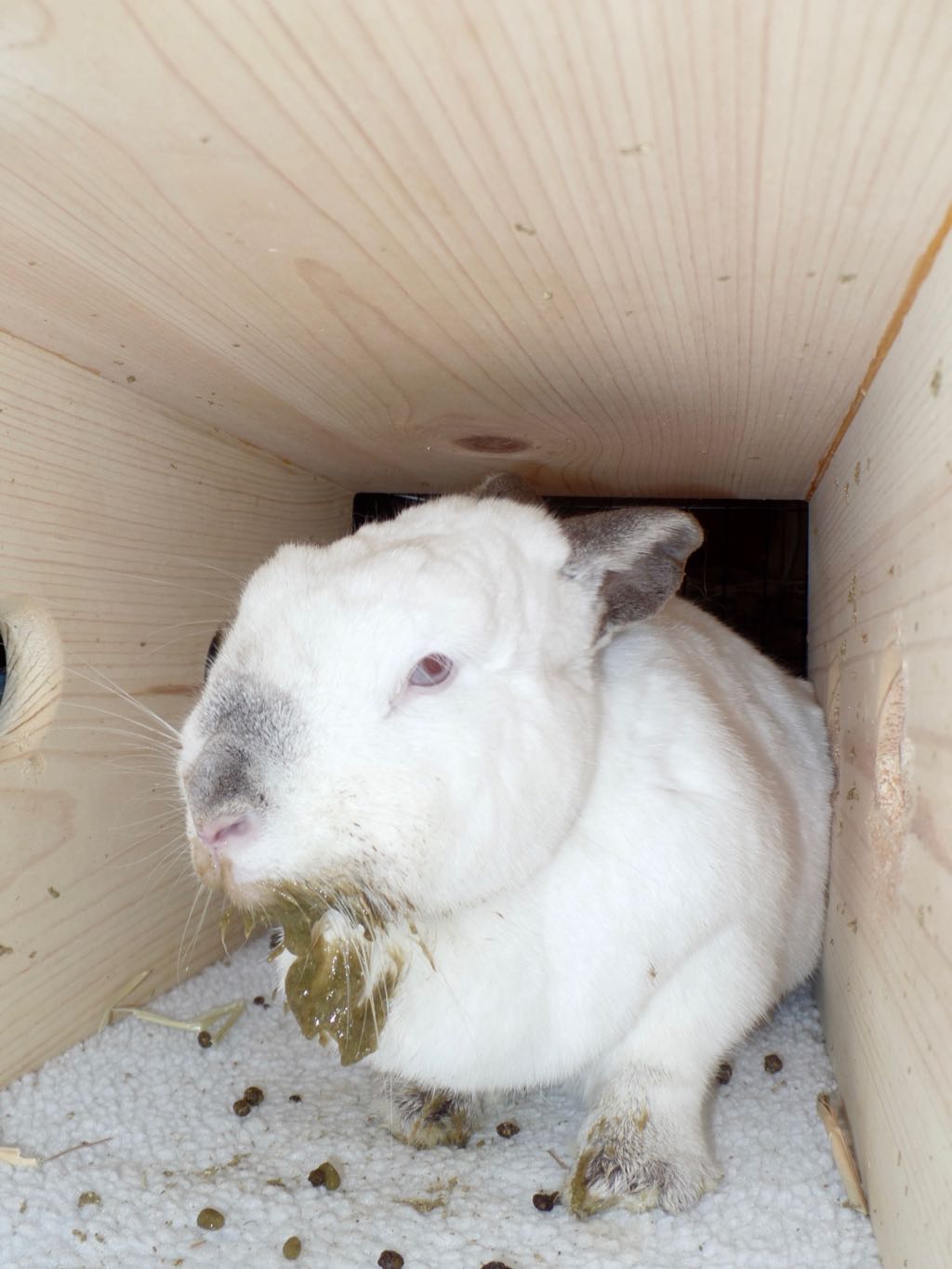 And there Penelope is, having got food paste on her lips and dewlap and absolute murder in her eyes. She would go back after these feedings to hide in her tunnel and we wouldn't force her to interact then. The photos were an exception. 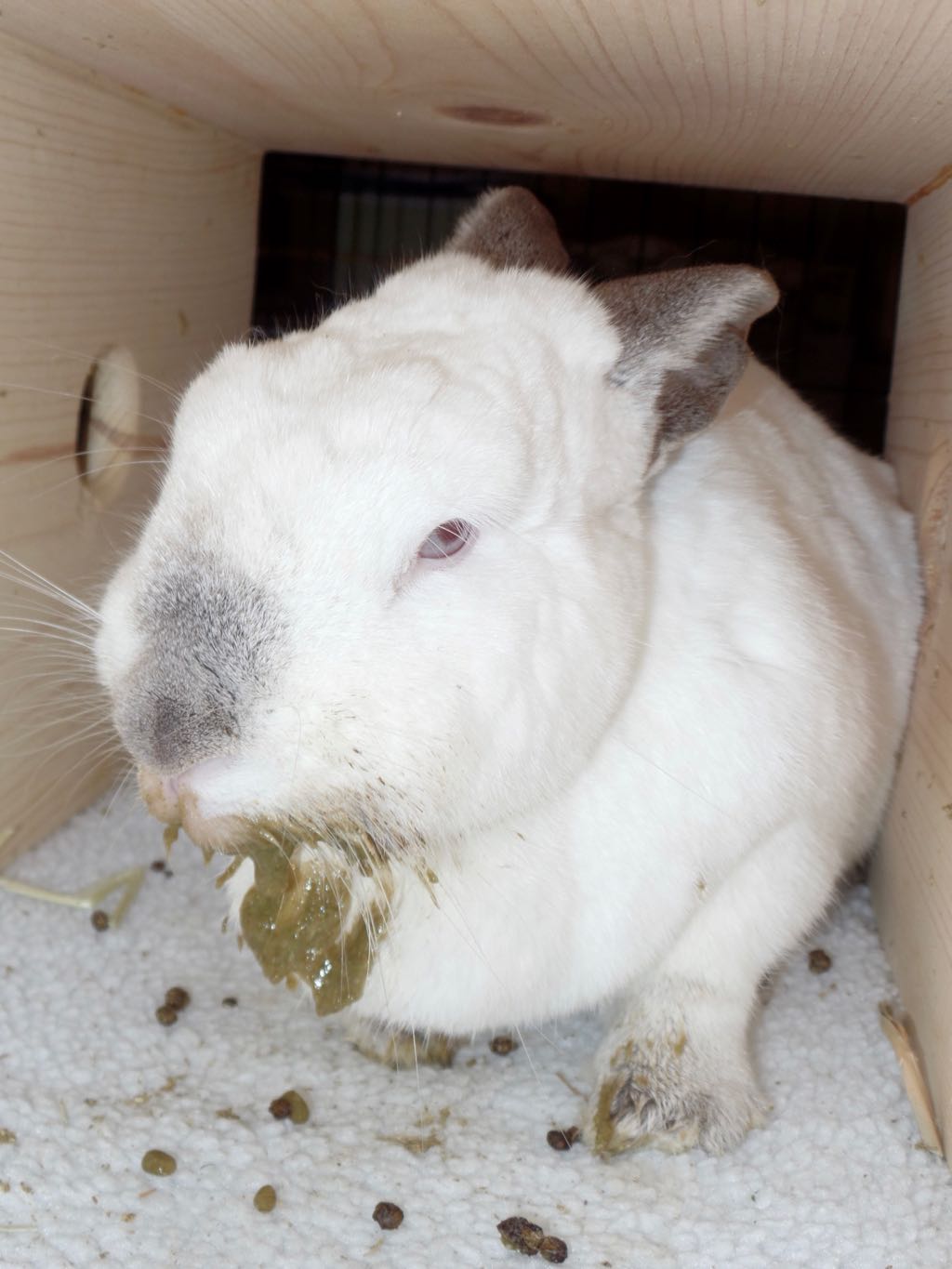 The last photograph I ever took of Penelope.

We had Penelope in total only about four months. She was about eight years old and we could have expected to have her another two to four years. She'd lived most of her life in a rescue, or sometimes in foster homes. Probably she never realized the difference between when we were just her latest foster parents and when we had chosen to care for her the rest of her life. We didn't have enough time with her, and what there was got divided with Sunshine. Sunshine had the hutch downstairs; Penelope, our bedroom upstairs. We spent less of our waking days there, but it was also the only room we could air condition and in the heat of summer it seemed more important that the older bunny have that.

The last months of her life

bunny_hugger or I would take our laptop upstairs for the evening, so we could spend time with her. I would usually take her onto the bed, and sit up beside her, and she would enjoy prowling around the soft bouncy surface. So much as she seemed to enjoy anything; she was, as I've said, a growly, grumbly rabbit. But there is something wonderful in an honest curmudgeon, and if she didn't ever really know that she had a home, at least she had it, for some time.

Trivia: Captain Vitaman, short-lived cereal mascot for Quaker Oats, was voiced by Peter Graves. (The character was redesigned as King Vitaman with Joe Flynn performing.) Source: The Moose that Roared: The Story of Jay Ward, Bill Scott, a Flying Squirrel, and a Talking Moose, Keith Scott. (I'm not clear whether the cereal was named Captain Vitamin too and was renamed King Vitaman with the character's redesign or what.)