No need to feel sad now

So here's something improved: we have fast Internet for the first time since we stayed overnight at

bunny_hugger's parents. That fiber optic Internet company finally got to wiring our neighborhood. We had been sitting on that knowledge a while, figuring we'd get to it when it was convenient. Then suddenly we got a lot more work at home, especially with

bunny_hugger needing to do video chats with people, and our old Internet was way overwhelmed. The company was still out servicing, though, and we thought ... well, why not try? They had appointments the next day, though, and were true to their word. Installing included putting a new hole through the wall of the house, and the plaster of our dining room, which is unsettling. But the first video chat with the new system was really, really good.

Also I took the heater out of the goldfish pond, and put the net over it instead. This will forestall any return of the ducks, alas. But it will protect the fish in there. While I was working on this I saw that at least two big white fish survived the winter and were playing near the surface happy as can be.

To happier days in July 2018: Pinburgh! Day one of the proceedings. I took fewer pictures of the competitive day than you might guess. 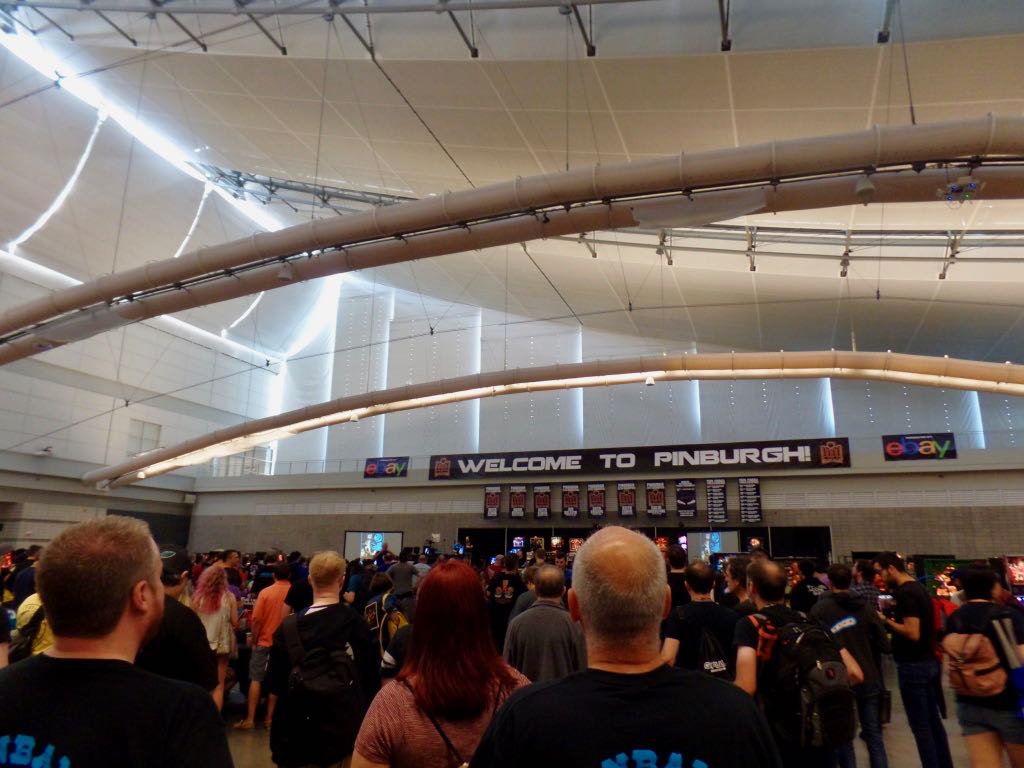 Welcome to Pinburgh! We gather for the greetings and the inspirational speech and the rules instructions. We think, because between the distance and the many echos from multiple speakers we can not understand a word the speaker is saying. 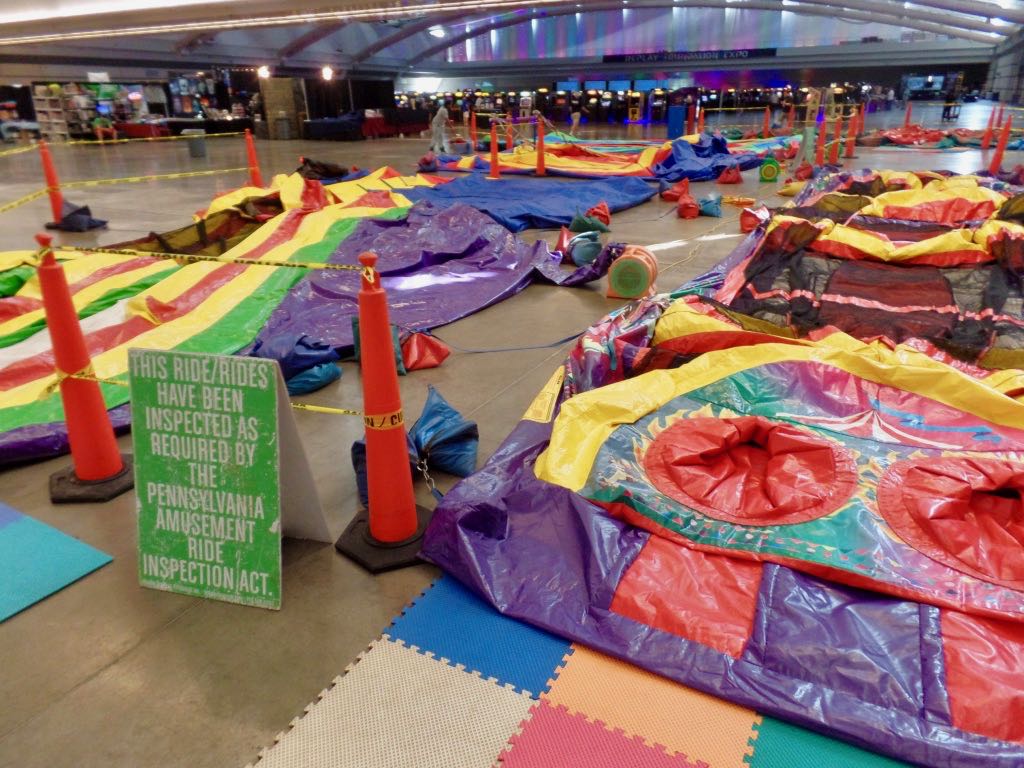 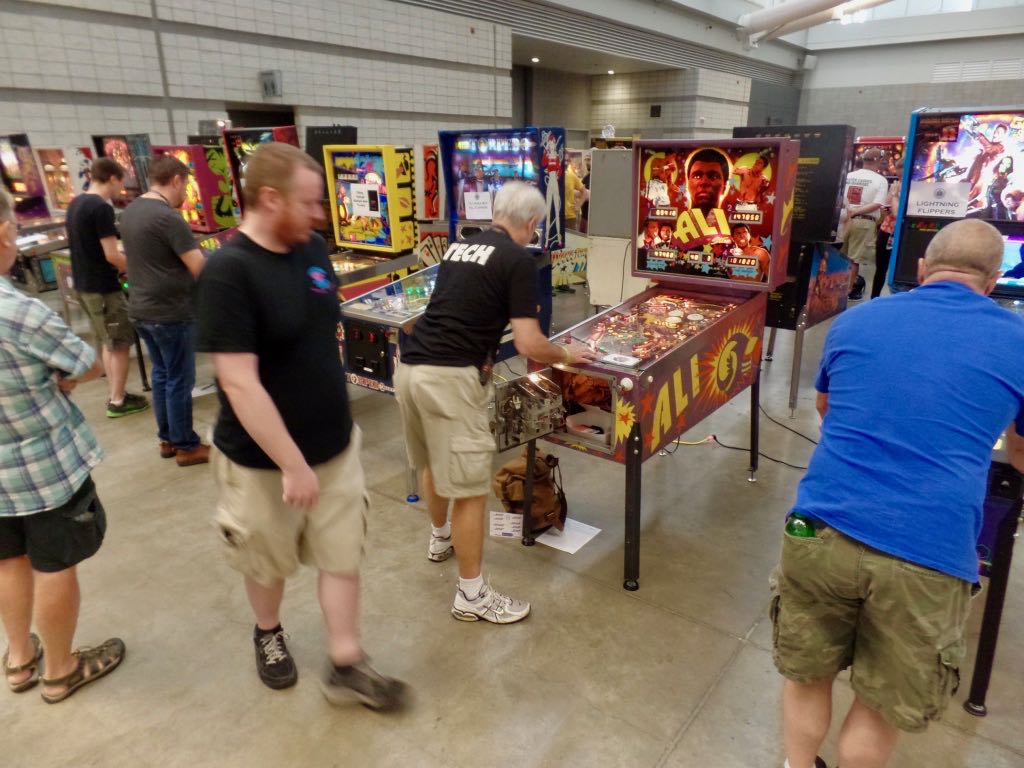 First round and the day is barely started and already the game Ali has something broken. 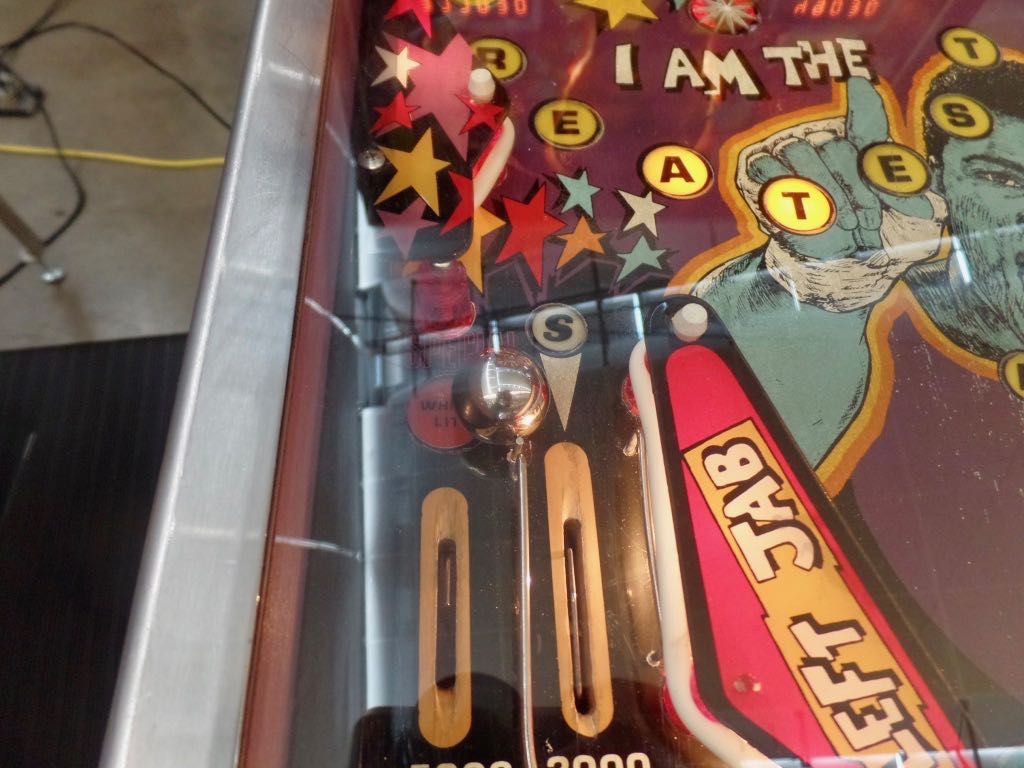 Yeah, you'd think a ball coming to rest on the edge of the inlane-outlane post like this would be a rare event. The more serious and important the tournament is, though, the more it happens. The really nasty thing is if you could shove the machine just right, you could make the ball roll to the right and back into safety. But nearly all nudges will send it to the left, to the outlane. Call a tournament director in and they can open up the game, but, since the ball is leaning to the left, they'll tip it over to the outlane. Which at least gets you whatever bonus you've collected, which you might lose if you try shoving the game hard enough to rattle the ball to the inlane. So what do you do? 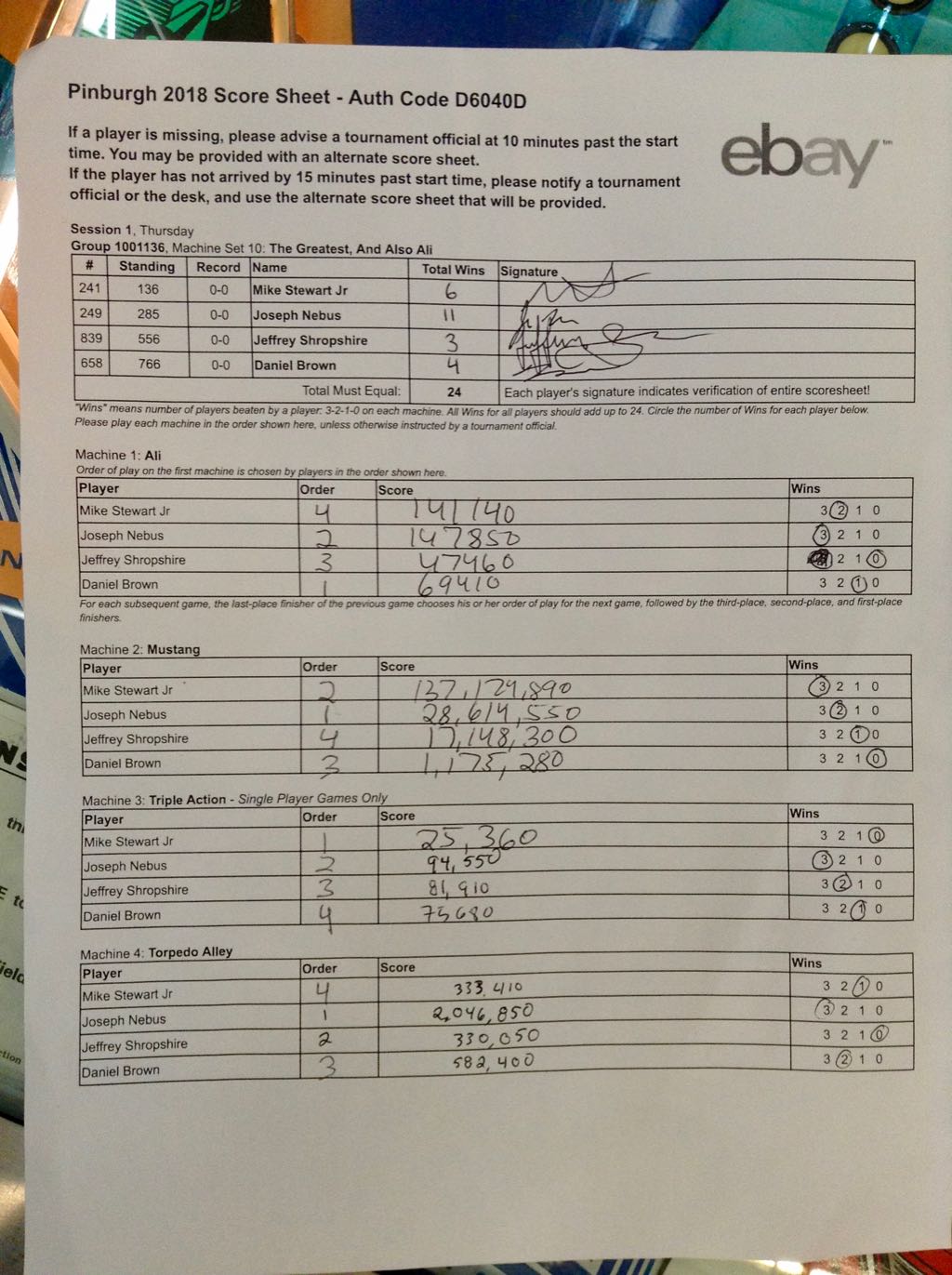 Seriously though, first day, first round, I get put in a group with MWS, who I can't ever not play pinball with whatever the venue. And his last ball of Mustang he blows it up so as to cheat me of starting Pinburgh with a perfect round. Where's the justice? 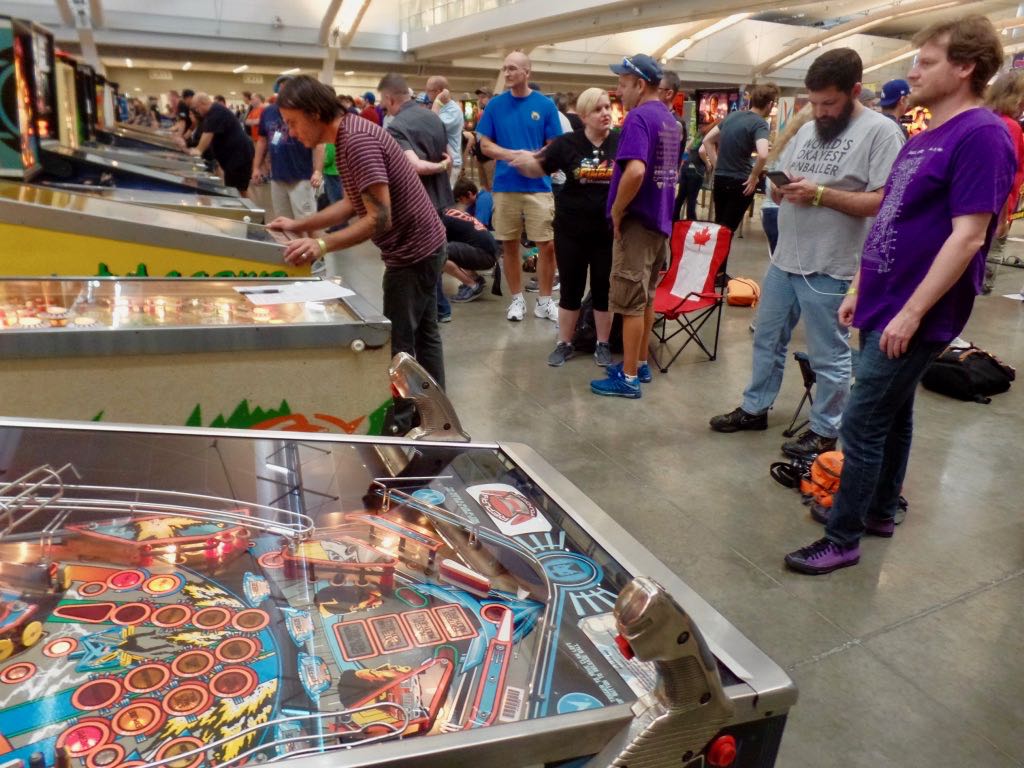 Hanging around tournament play. The ``World's Okayest Pinballer'' T-shirt is a popular one especially at Pinburgh. Notice at least two people have brought their own chairs; there's a shortage of seats provided on the tournament floor. 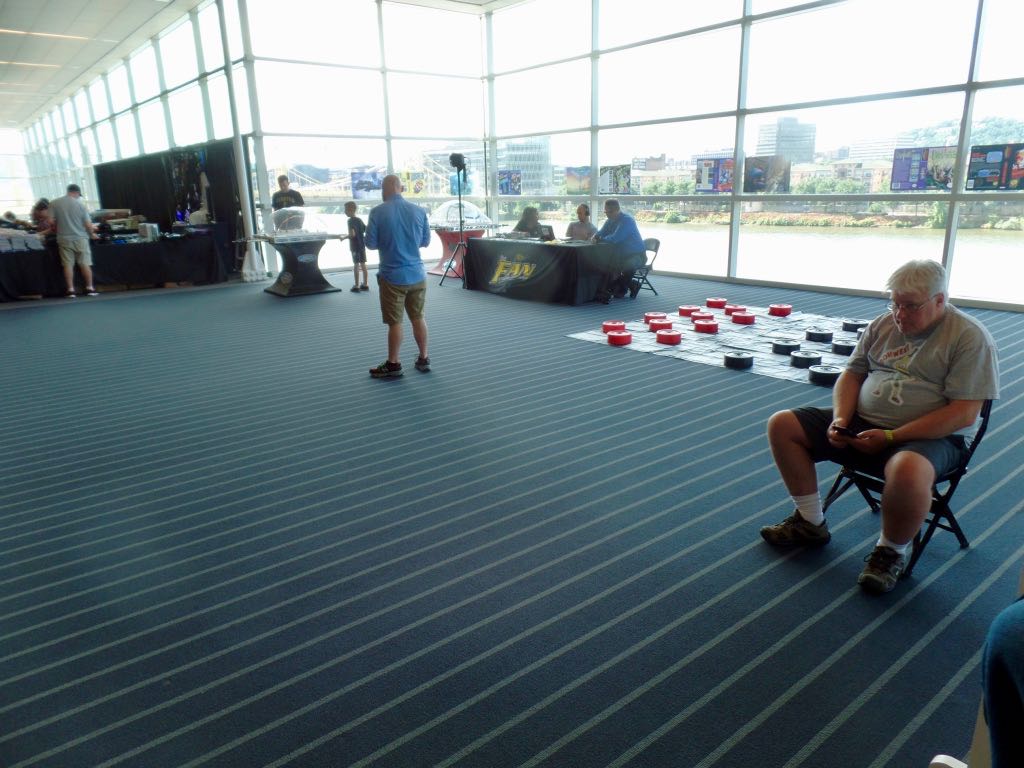 Folks hanging out outside the main hall, including a giant checkers set occasionally used over the weekend. Also a local radio station (I'm assuming) doing the occasional broadcast from the big pinball and arcade convention. 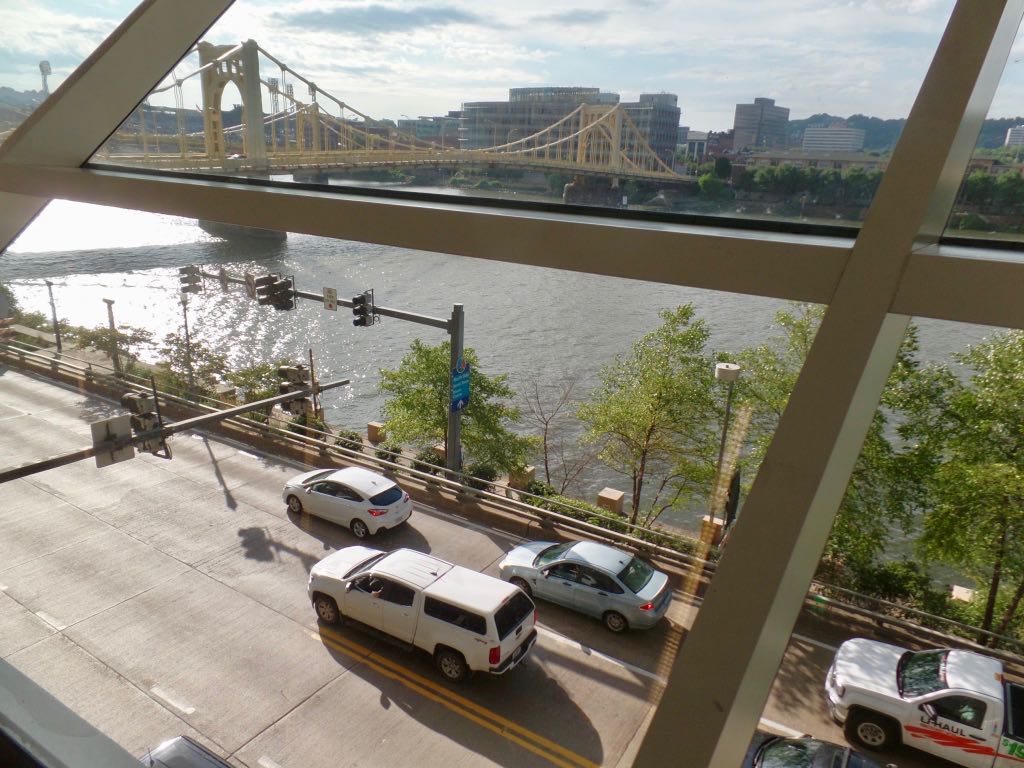 Peering out the windows over the highway, to one of the many bridges of Pittsburgh and off in the distance the ballpark. Our hotel room! Actually our second room; we'd originally been in a rather larger room while this one was shared by JTK, ADM, and MWS, and somehow also RLM and MSS joined in and you know? This room was the right size for two, maybe three people sharing. The other room could just about fit five. At least it had space where they could all get a bed. It was an easy swap to agree to.

Trivia: A team of African-American players from Philadelphia applied in 1867 to join the Pennsylvania Association of Amateur Base Ball Players. They were advised to withdraw their application rather than have it on record that they were blackballed. They then applied to the National Association of Base Ball Players, and after the nominating committee reported in they were similarly pressed to withdraw the application. Source: But Didn't We Have Fun? An Informal History of Baseball's Pioneer Era, 1843 - 1870, Peter Morris. Well, some of us did.

Currently Reading: Lost Discoveries: The Ancient Roots of Modern Science --- from the Babylonians to the Maya, Dick Teresi. The book is really strong talking about mathematics and technology, and a bit on chemistry. But, like, comparing various cosmological origin-stories to one another, and to the current Big Bang theory? That's pretty weak ground except insofar as it points out that the hypotheses and theories we form, even though they are meant to explain ``objective'' observations, are things that we create and that have to fit narrative patterns we accept.