Nighty night, will birdies wake you

bunny_hugger's parents an iPad Mini. We've been trying to get them to move to a laptop, that they can sit in a comfortable chair and use, for years, and they resist for reasons of new-technology-anxiety. But if there is any good to a crisis, and note how much work is loaded into that ``if'', it's that it makes possible leaps into the previously unthinkable. Officially we're calling this their Christmas present, delivered early, but that's a way to let them let us buy such a thing.

The catch was setting it up.

bunny_hugger had it delivered to our house, where she could set up everything. And then we had to get it to them. We brought it, along with some groceries and DVDs and all, to their house today. We had wanted to spend the day, but in deference to the need for quarantine, we didn't go in, or even stand near them. We set the bags down on their porch, and took bags that they set with some things for us, and said things to each other from ten feet away.

bunny_hugger and I wore homemade masks, too. This may be overcautious but overcaution is the better error in the circumstance.

The other catch was getting them to use it. Her mother couldn't get the passcode entered to unlock the thing, and

bunny_hugger and her mother spent 25 minutes on the phone, plus two photographs of what was on the iPad mailed to each other, trying to get through that. And then time spent working out how to sort out other basic stuff, like web-browsing and setting up a the Facetime. In hindsight, what we should have done is let them open and disinfect the iPad Mini, and then watch them from the other side of the sliding-glass door as they set up the basics, where we could see what they were doing and say, no, no, move your finger to the left.

After a lot of this, though, we had success: they had an iPad Mini up and running, and on the Internet, and we could even get a The Facetime running. So it should be easier to talk with her parents, and her brother (we have a get-together planned for tomorrow) and all soon. And maybe even debug Internet stuff. Here's hoping.

And now, at long last, my final pictures of the Kennywood visit we took in July 2018. What's next on my photo roll? Will it be pinball or an amusement park? Tune in tomorrow and just see. 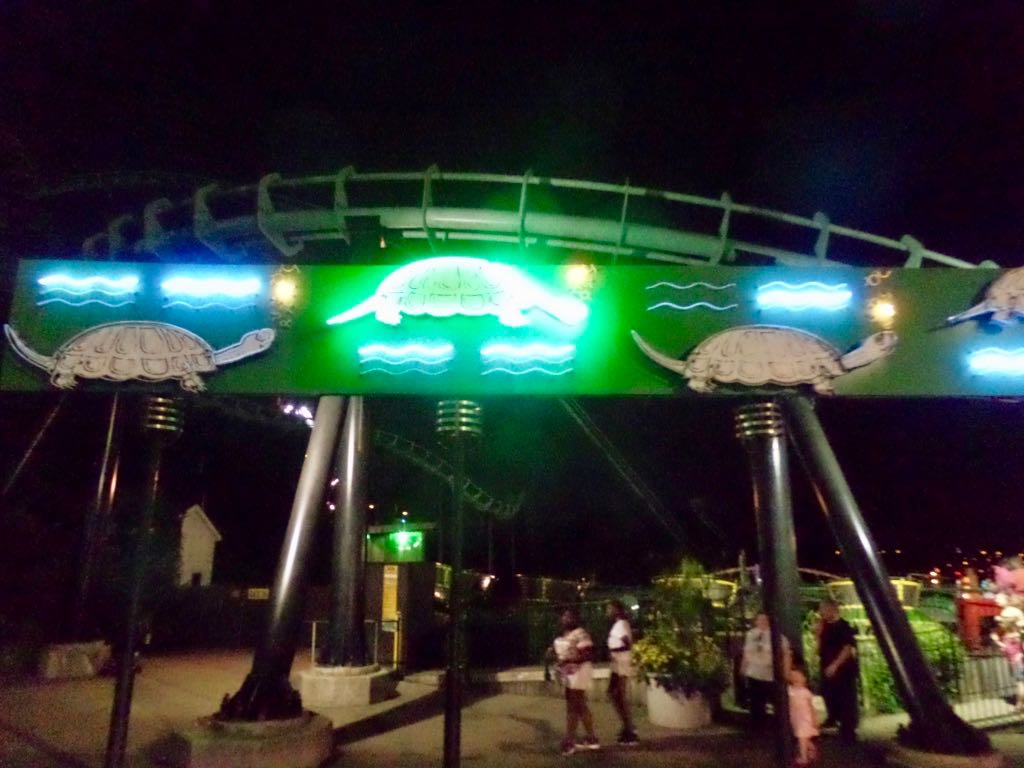 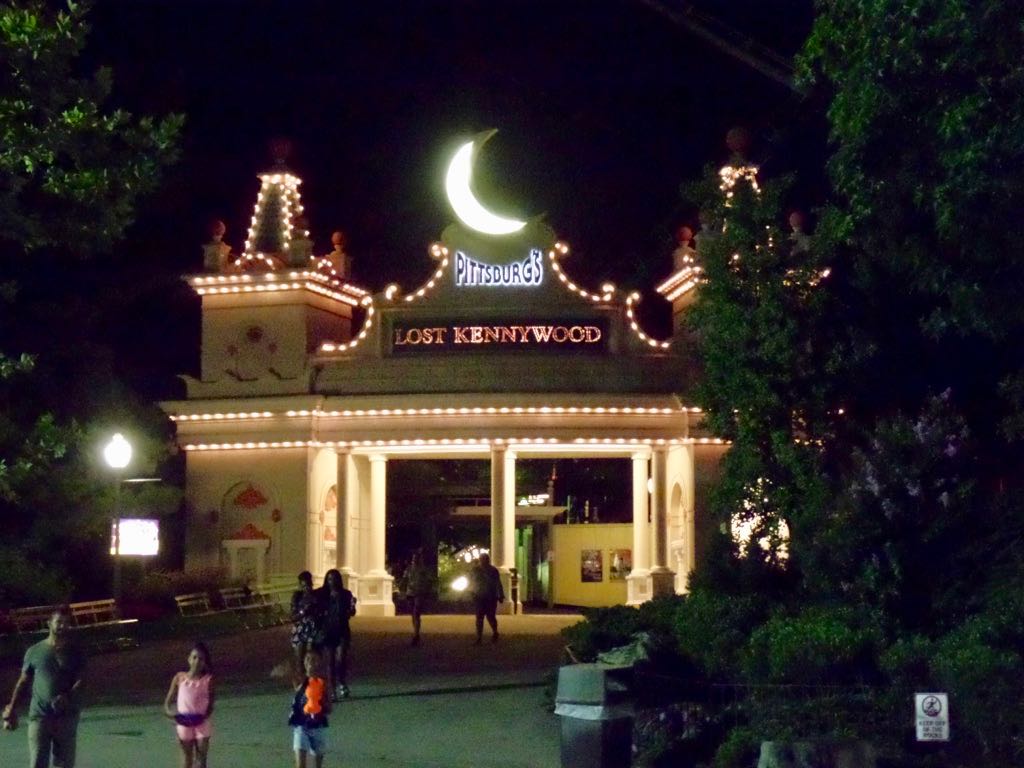 And here's the entrance to Lost Kennywood as seen by night. 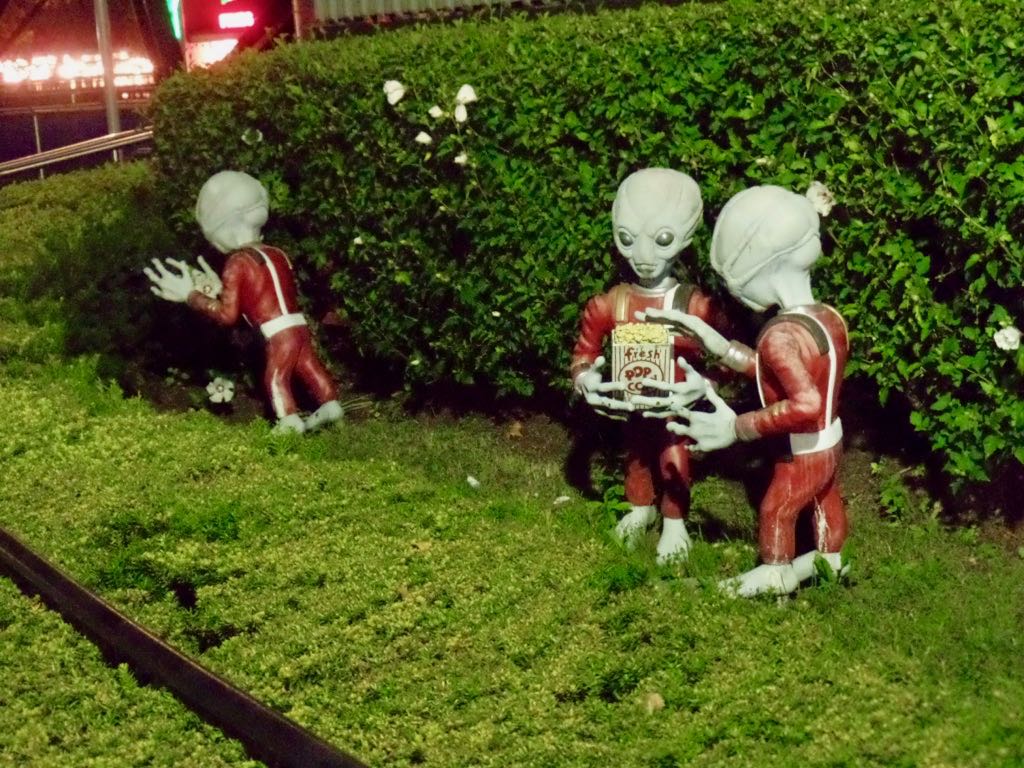 Some of the theming around Cosmic Chaos, a Mega Disk'O, which is made up to look like a flying saucer. Around the ride, we see aliens who are either delivering or picking up boxes marked Fun. 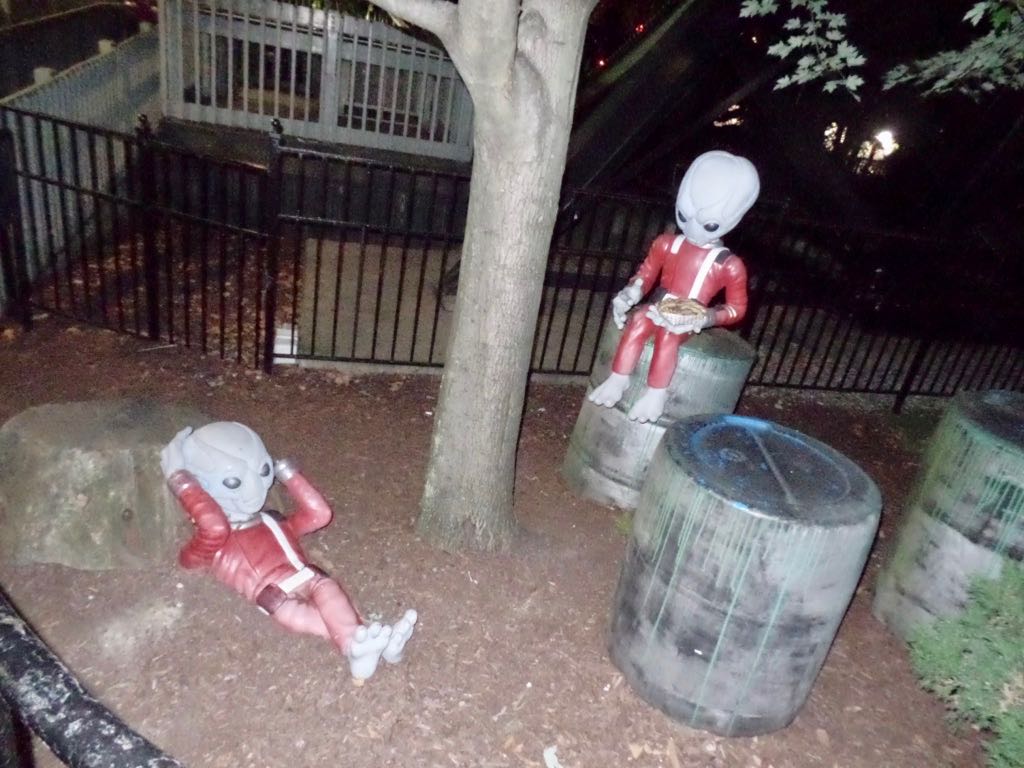 Some of the Cosmic Chaos aliens just hanging out. The photo looks so different because this time I used my flash. 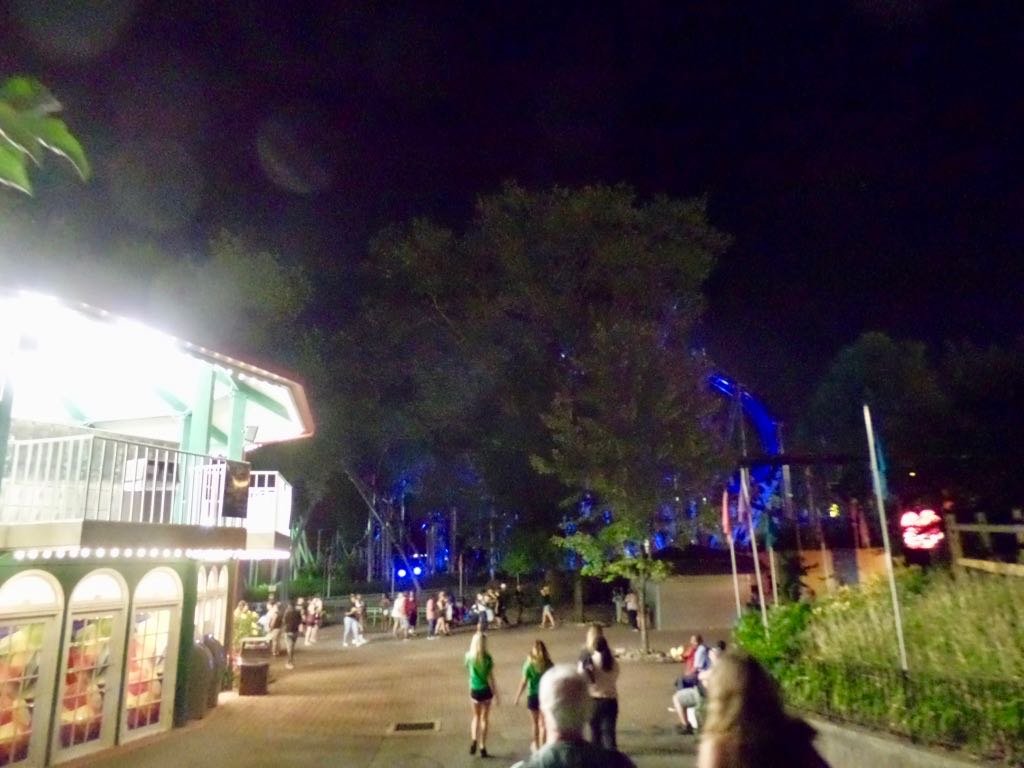 Alas, leaving the park. The building on the left is a candy shop on the bottom and the rental lockers on top. The blue structure in back is the Sky Rocket roller coaster, which was down when we visited in 2018. 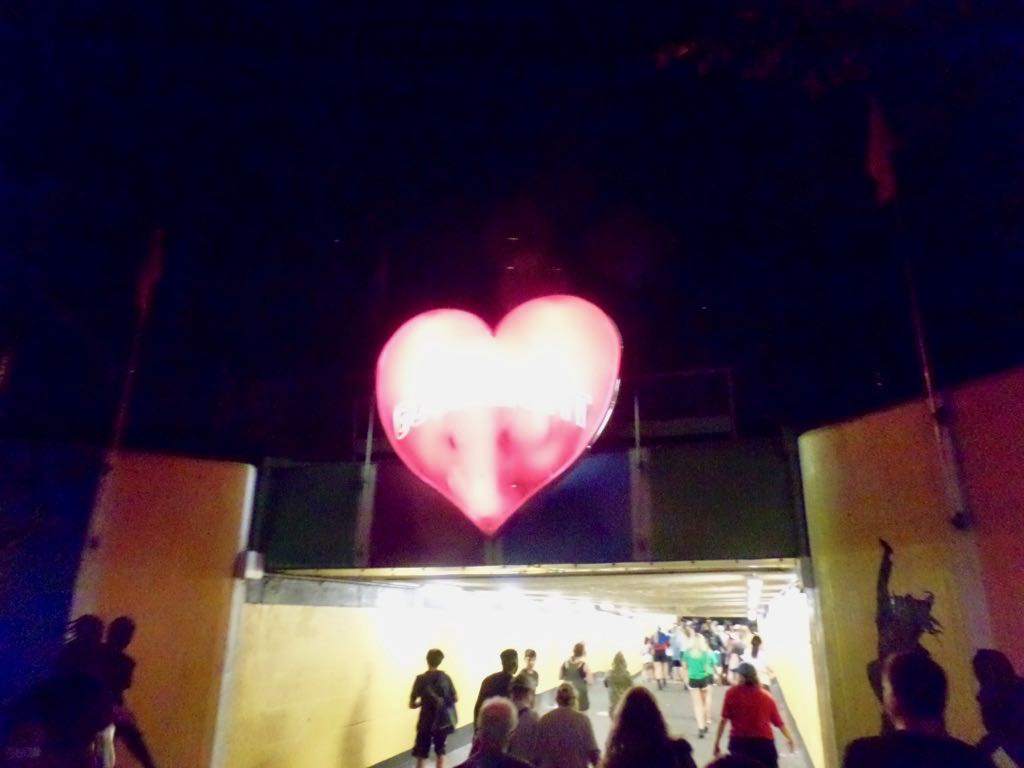 The 'Goodnight' valentine-heart above the tunnel to exit the park. When we leave I try to leap up and tap the bottom, and usually make it. 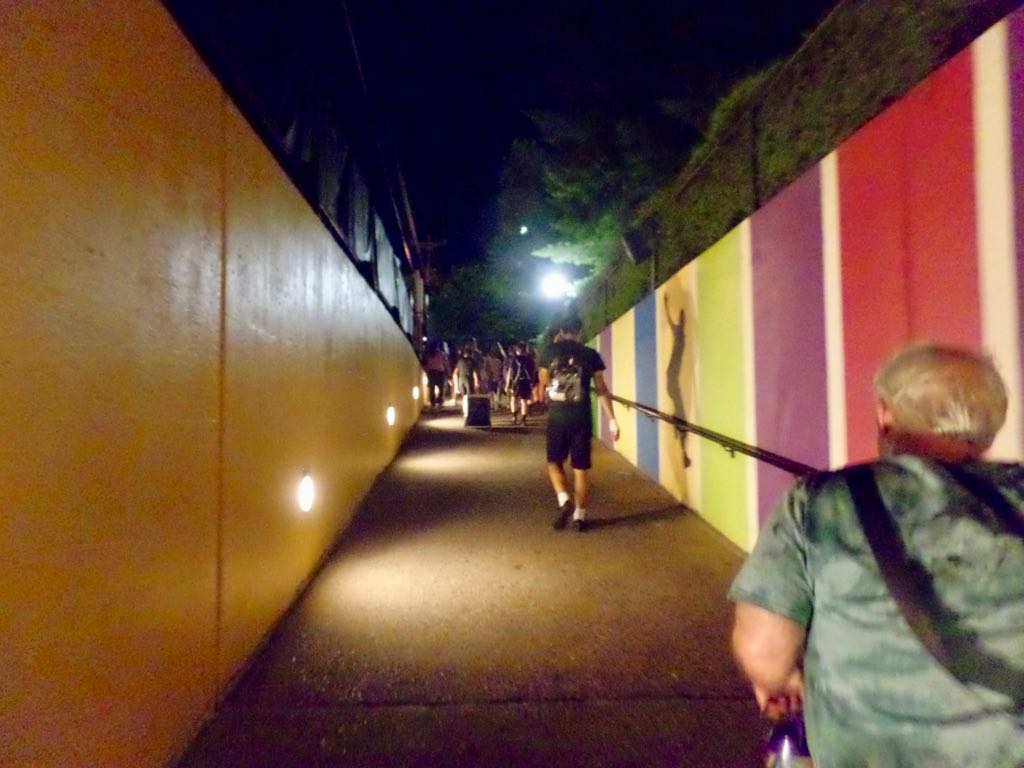 The ramp leading from outside the tunnel to the park gates. There's this nice rainbow patterning, as well as some silhouettes of people doing fun things like jumping. 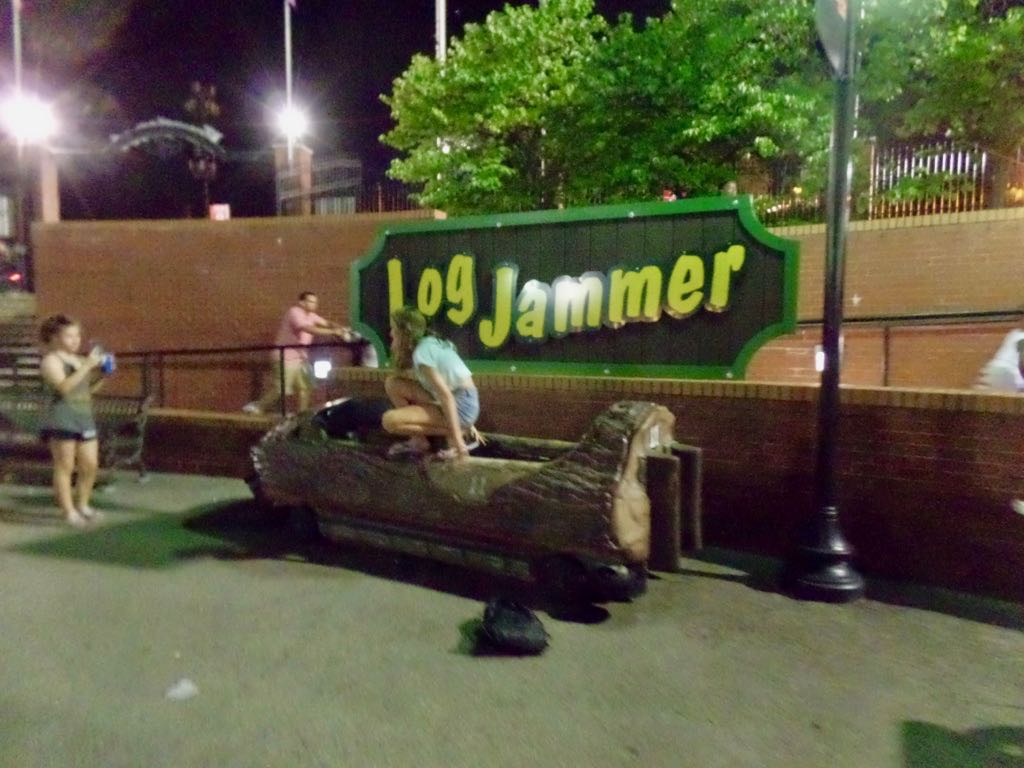 Log Jammer! When they tore the ride down they kept at least some of the boats, and set one, and the ride sign, out front where anyone can get a picture. 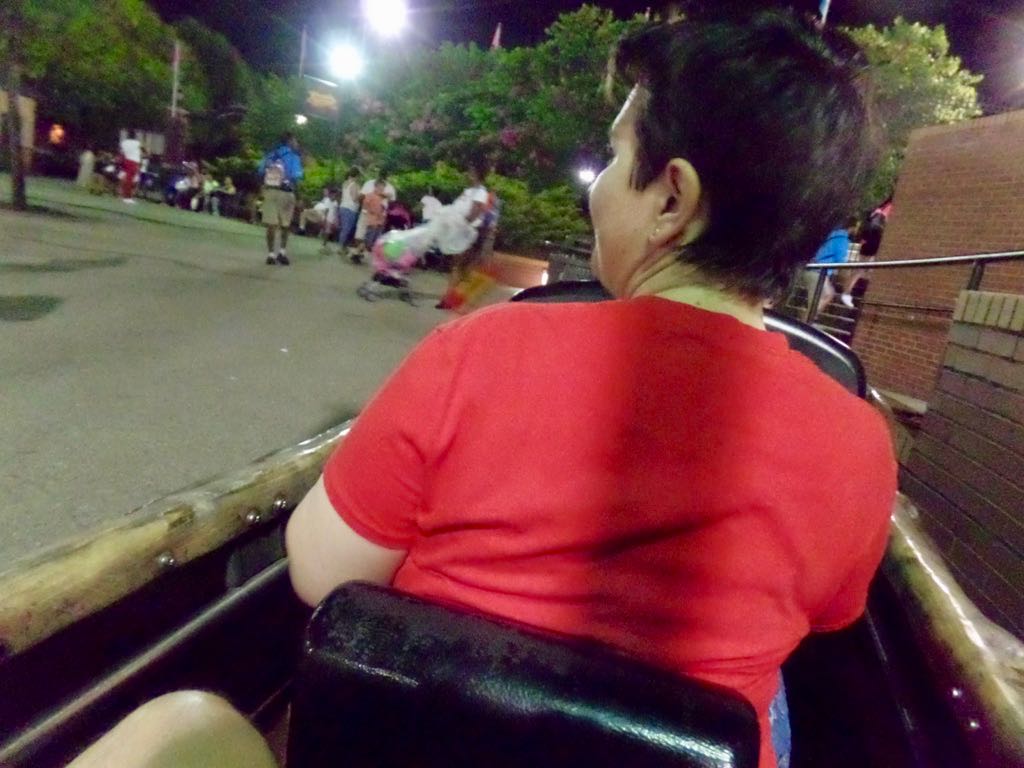 See? Here's me and

bunny_hugger taking the picture inside the Log Jammer boat that we could not when it was an actual ride, because we follow instructions about this kind of thing. 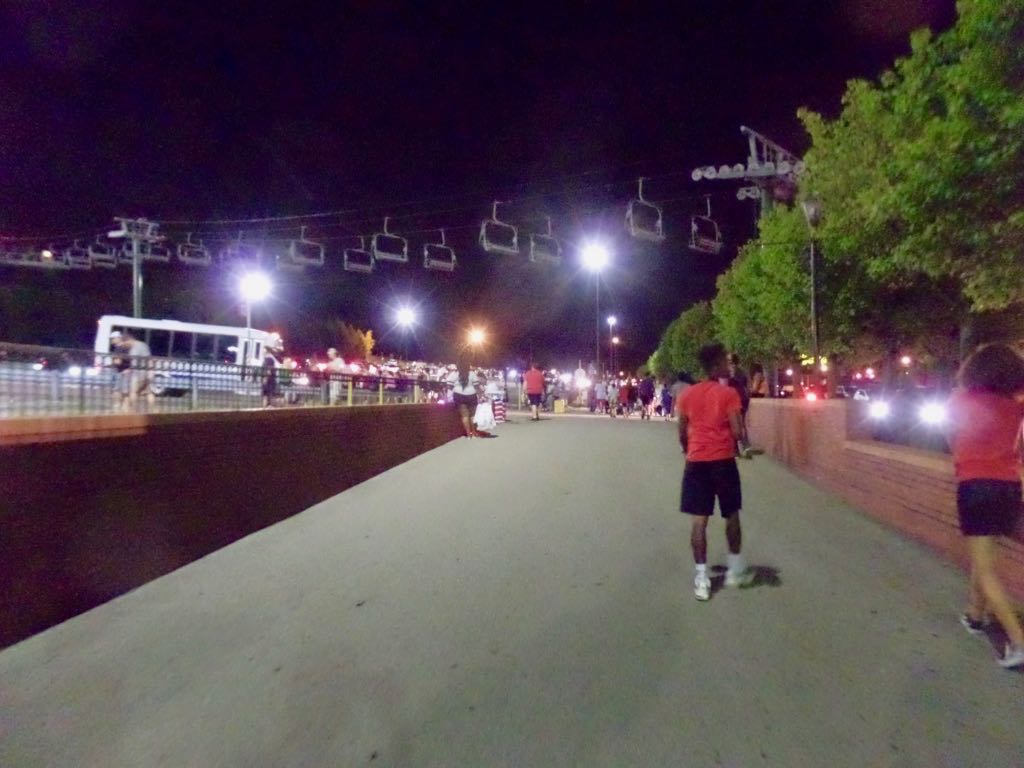 Exiting to the parking lot. The chair lift brings people from the gate to the most distant free parking; we've never seen it in operation. 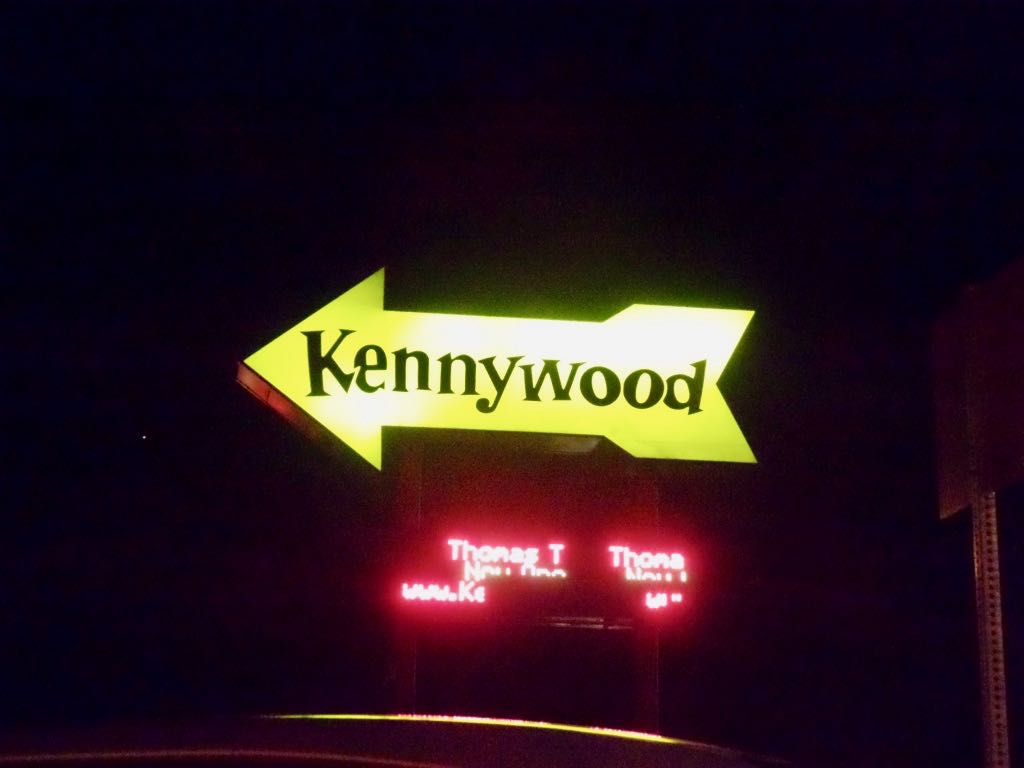 Kennywood's street sign, along with a slightly glitched declaration about the Thomas the Tank Engine town now being open. 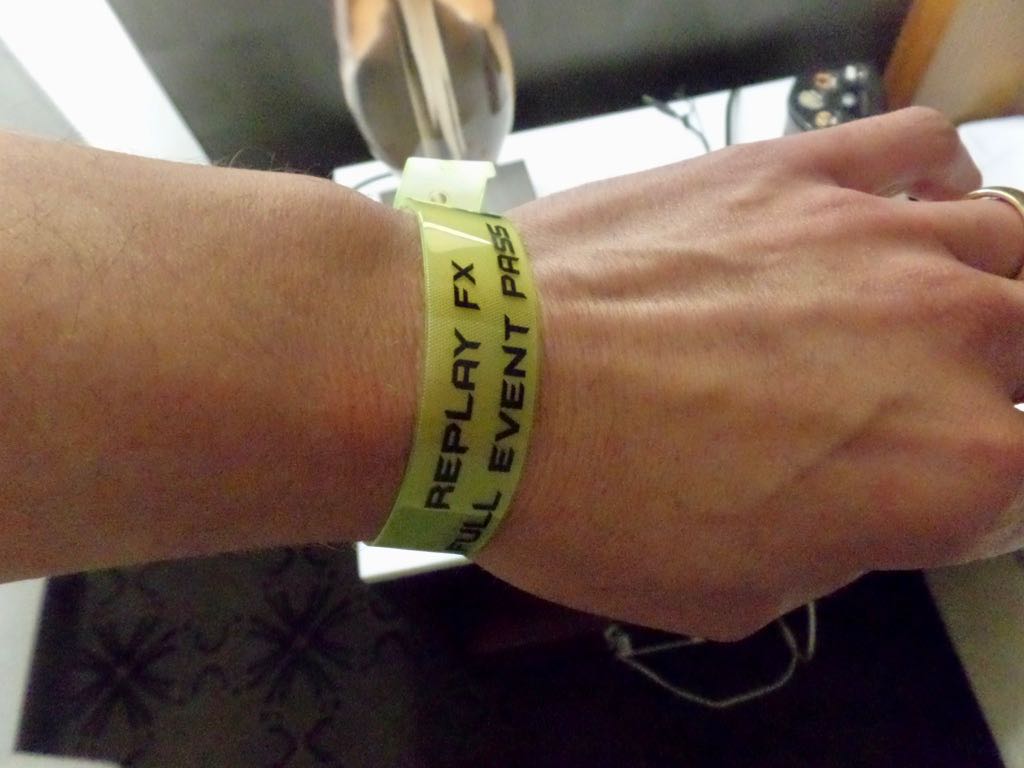 And a last picture back at our hotel, of my ReplayFX admission wristband. Taking it off was the last bit of the Pinburgh 2018 weekend. (For 2019 they had elastic wristbands, removable at night.)

Trivia: Apollo 13's projected landing spot was flown over and photographed during the tenth lunar revolution of Apollo 12. Source: Where No Man Has Gone Before: A History of NASA's Apollo Lunar Expeditions, William David Compton.