There's no need to be unhappy

I did more than I had to on my mathematics blog this week! I didn't do the one post I always do early in the month, but I did some more. Here's what, if your RSS reader missed my feed:

What did I use the Sunday slot on my humor blog for? Popeye and the Giant: body horror, weirdness, but no, not *that* Giant, reviewing a 60s Popeye that, really, went in strange places. You might like.

So those of you who guessed ``amusement park'' would be the next thing on the photo roll, congratulations! Please pick up your winnings at the will-call desk. In early August 2018 we made a Cedar Point trip for an unhappy reason: a ride would be going away, and we wanted a last ride. 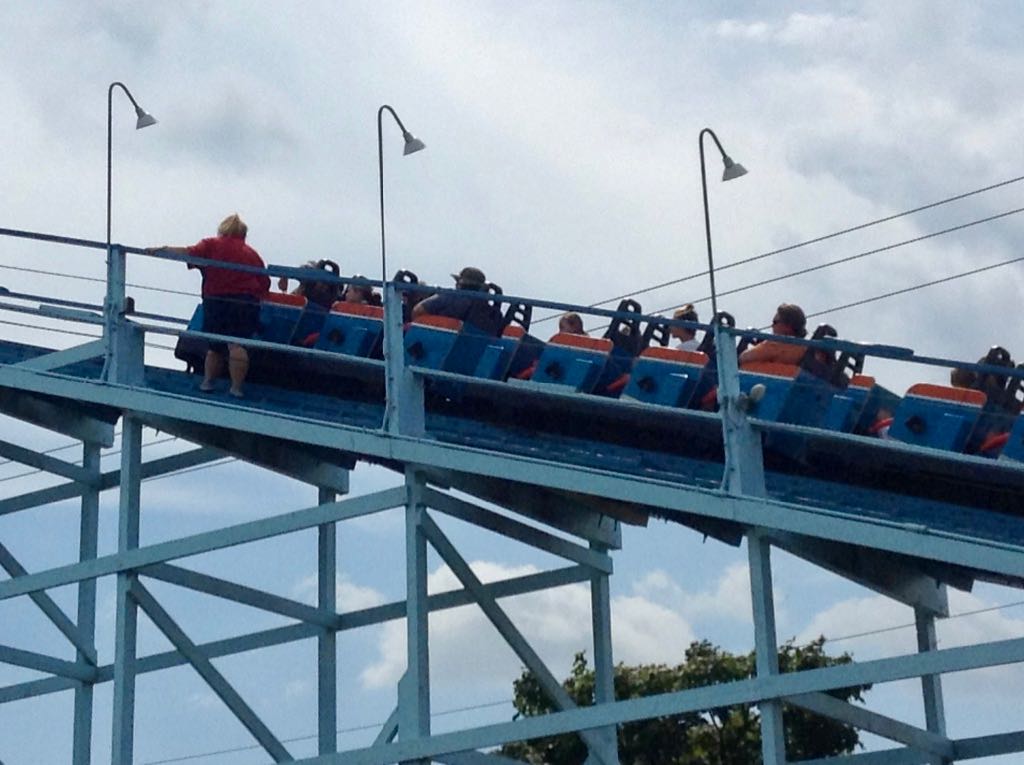 An increasingly common sight at amusement parks: Blue Streak halted on the lift hill, and a ride operator come out, because someone took their phone out on the ride. 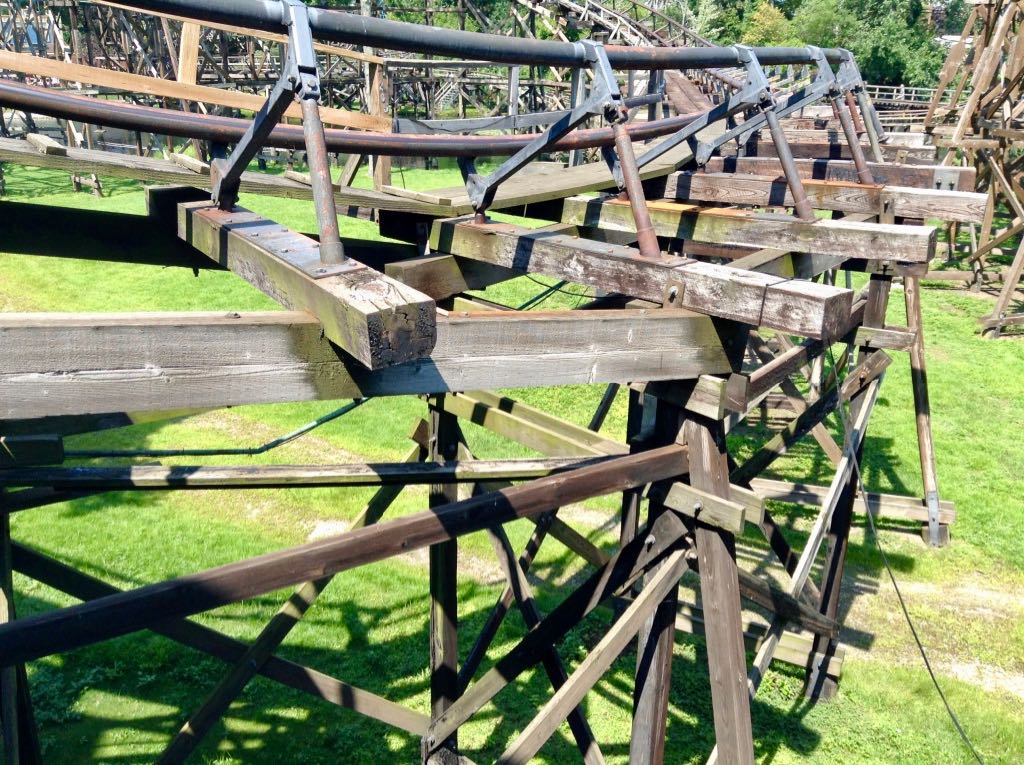 A look at the Cedar Creek Mine Ride because I happened to be at a part where its heap of wood was looking great. 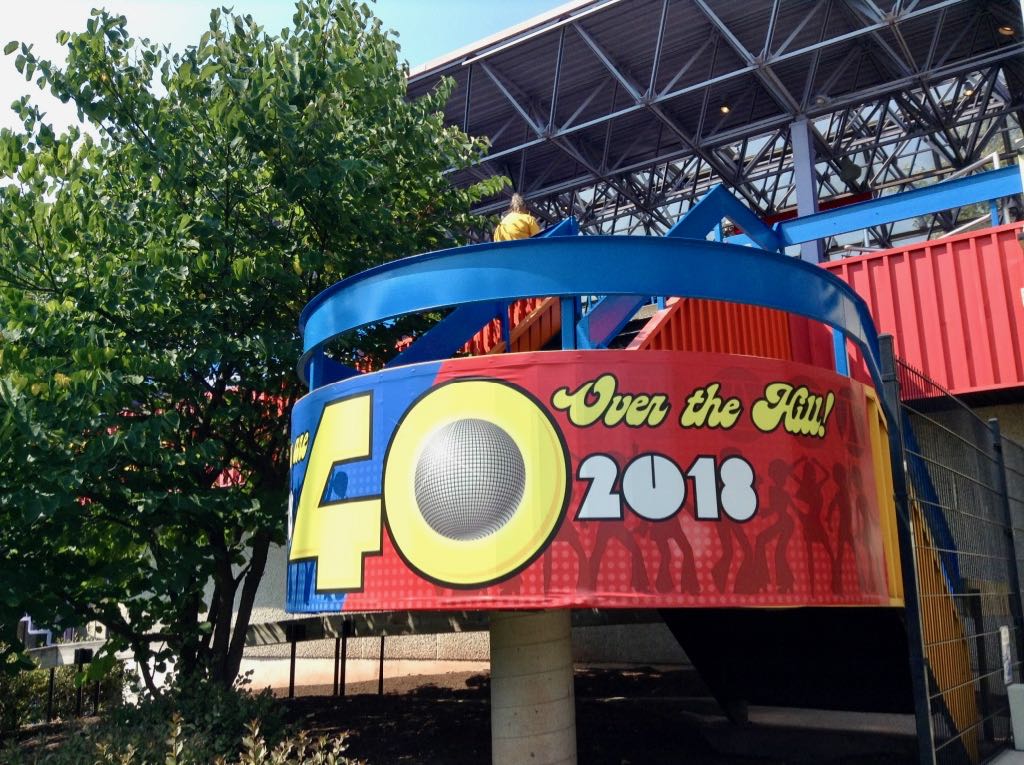 The Gemini racing coaster had its anniversary that year; here the exit queue gets a sign celebrating its 40th. It read, ``The Twins Are Over the Hill! 1978 - 2018''. 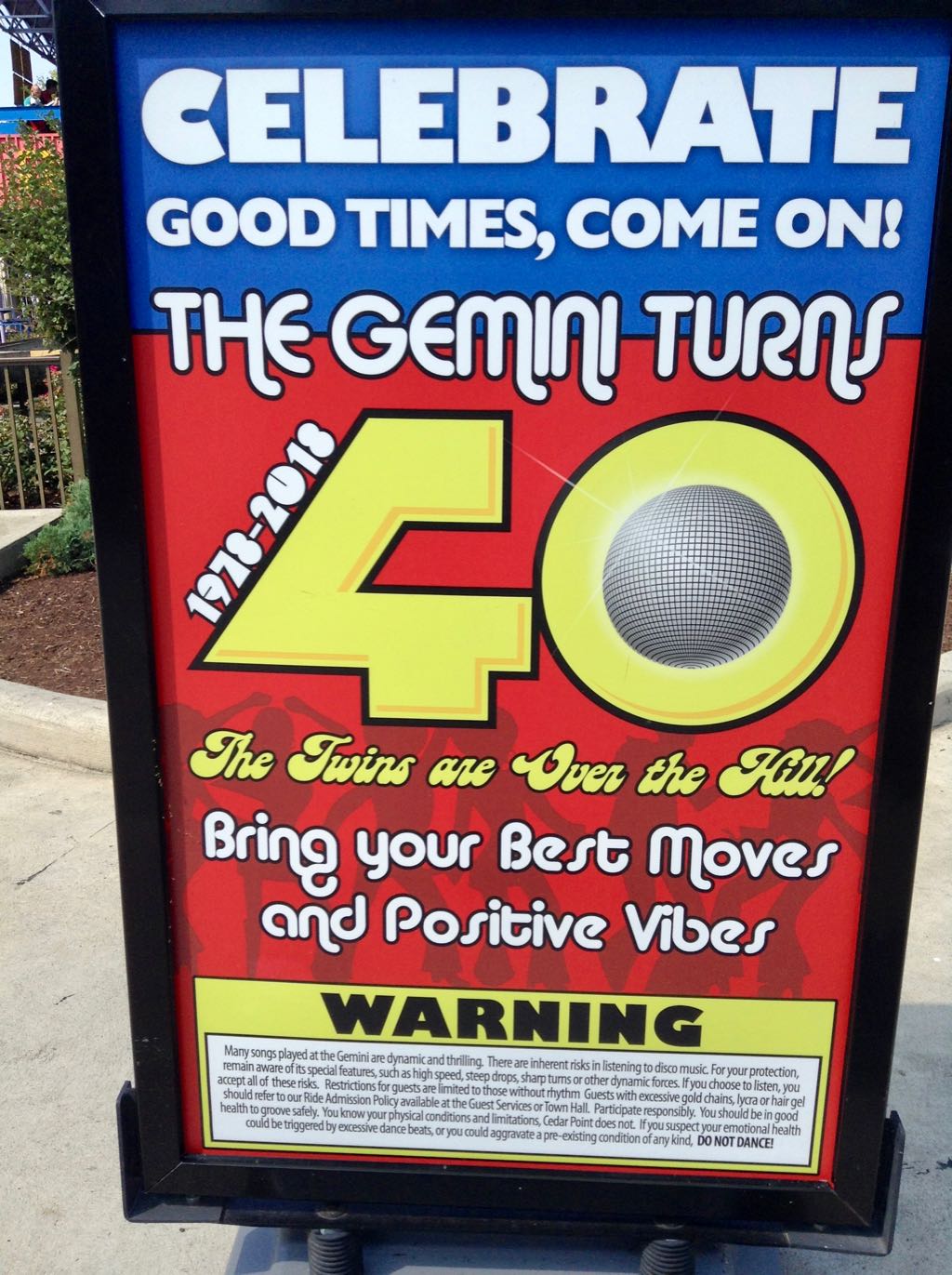 The speakers around Gemini were playing disco hits. Here's a sign they put out to make the decoration a little more strongly themed. 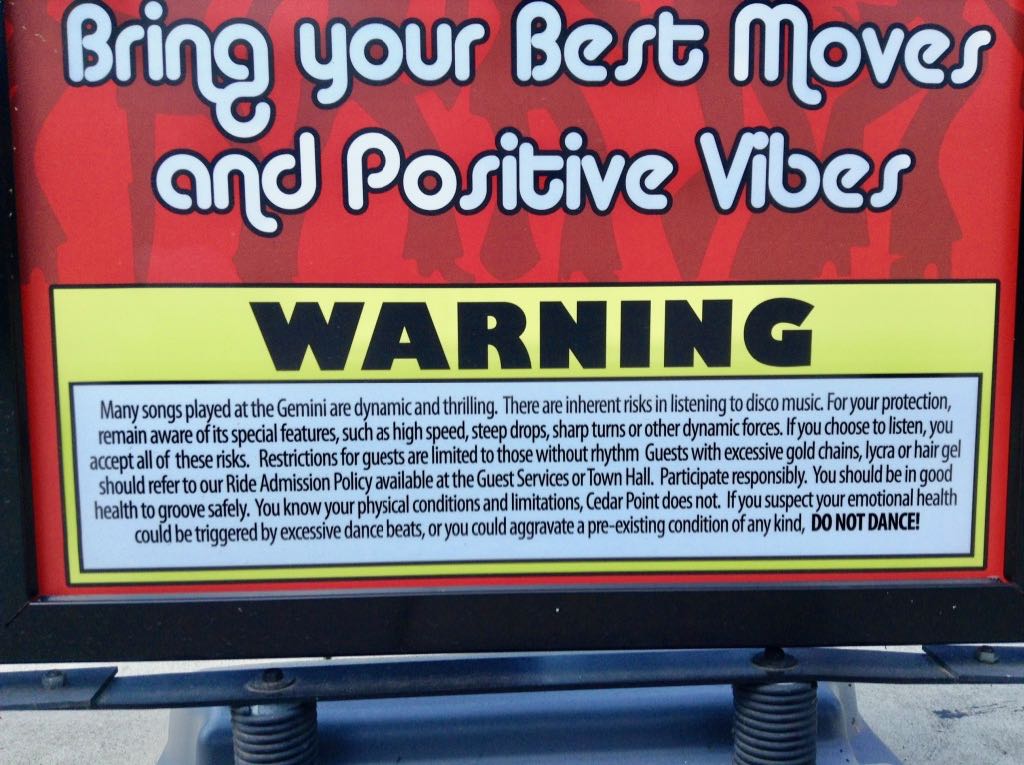 Warning sign at the bottom that's a parody of the disclaimer text on the sign outside every ride. 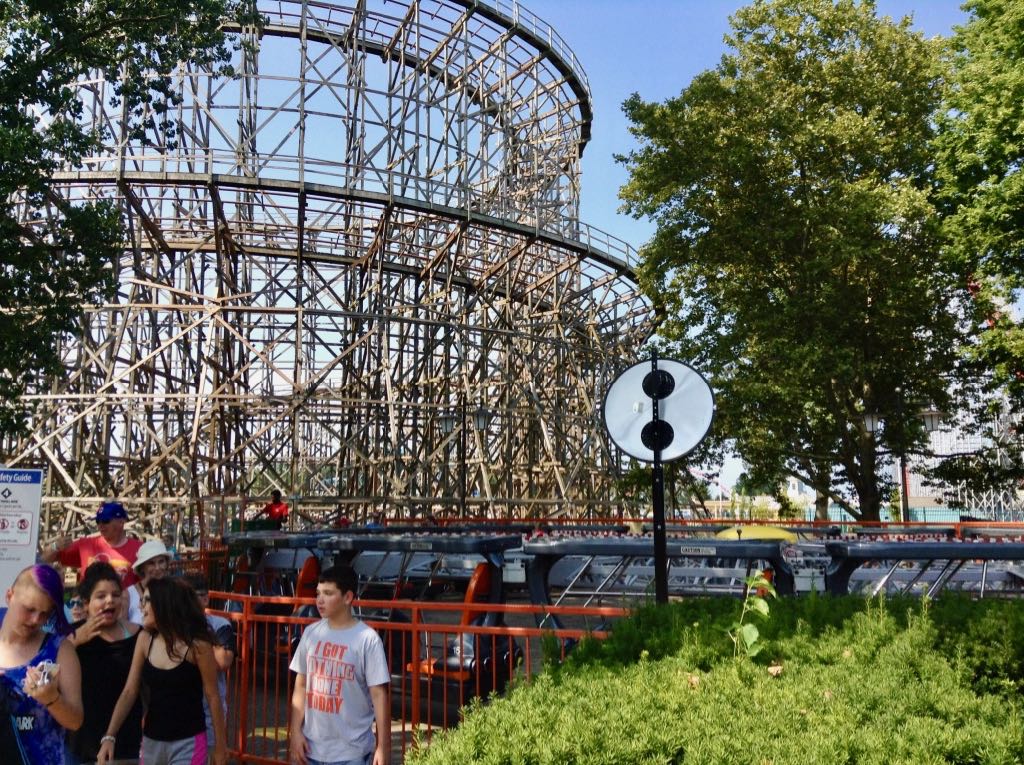 And our goal for this trip: our farewell trip to the Witches' Wheel, which was located at the turnaround for Gemini, seen above. 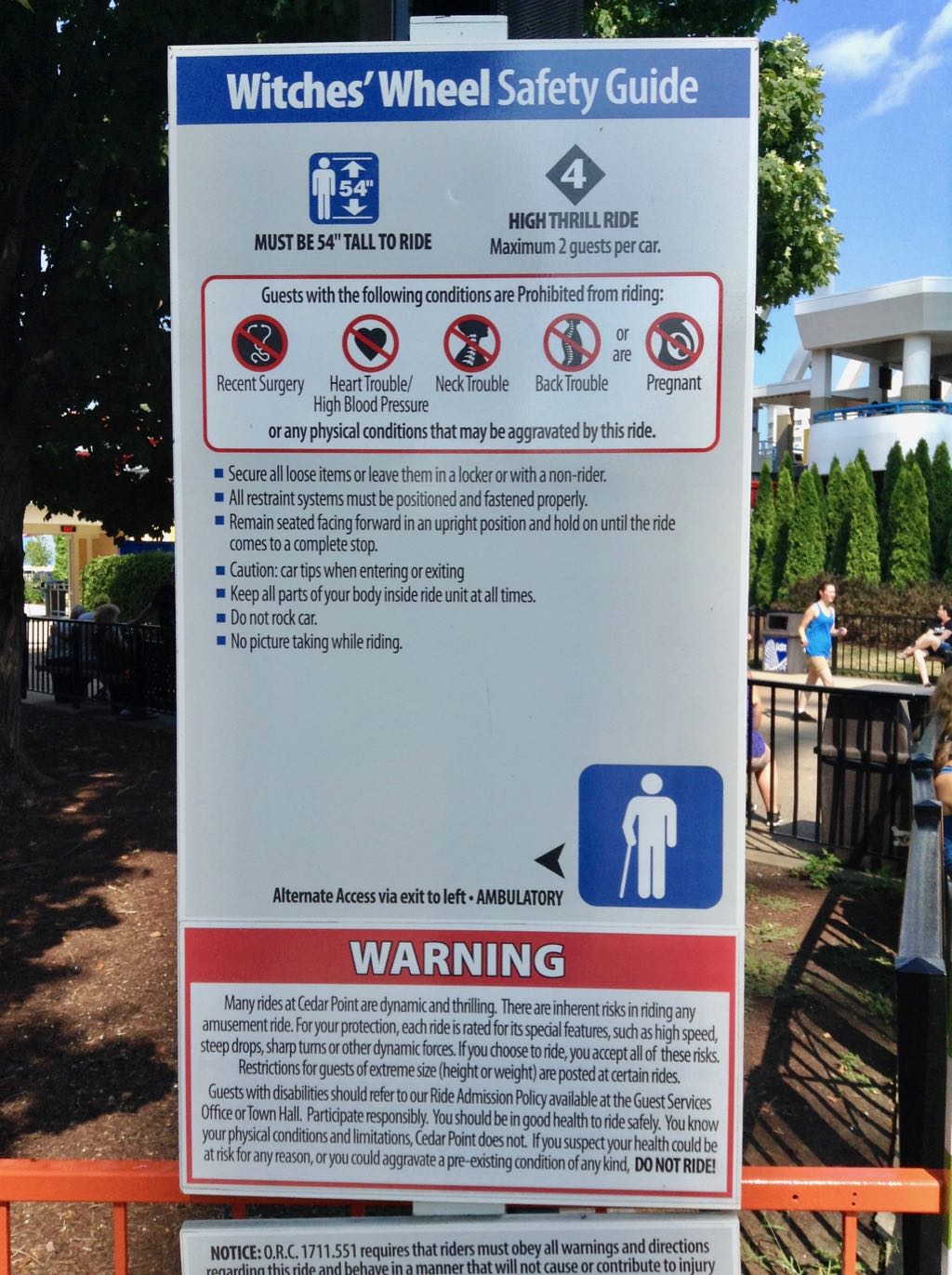 The safety guide and all for Witches' Wheel. Plus, you can see the warning sign for the ride and compare to the spoof one on Gemini's sign. 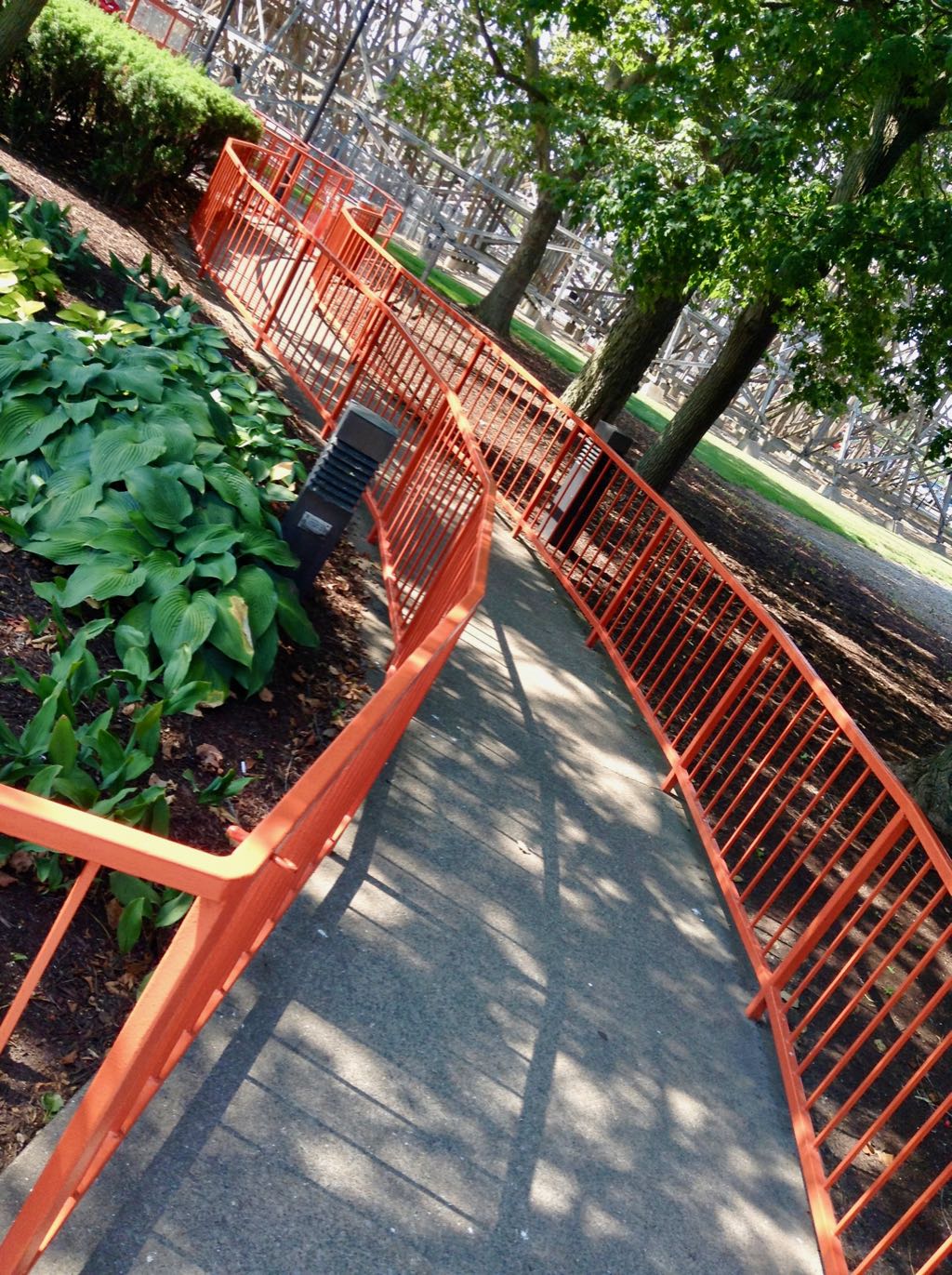 Witches' Wheel had a nice curving path to the ride. 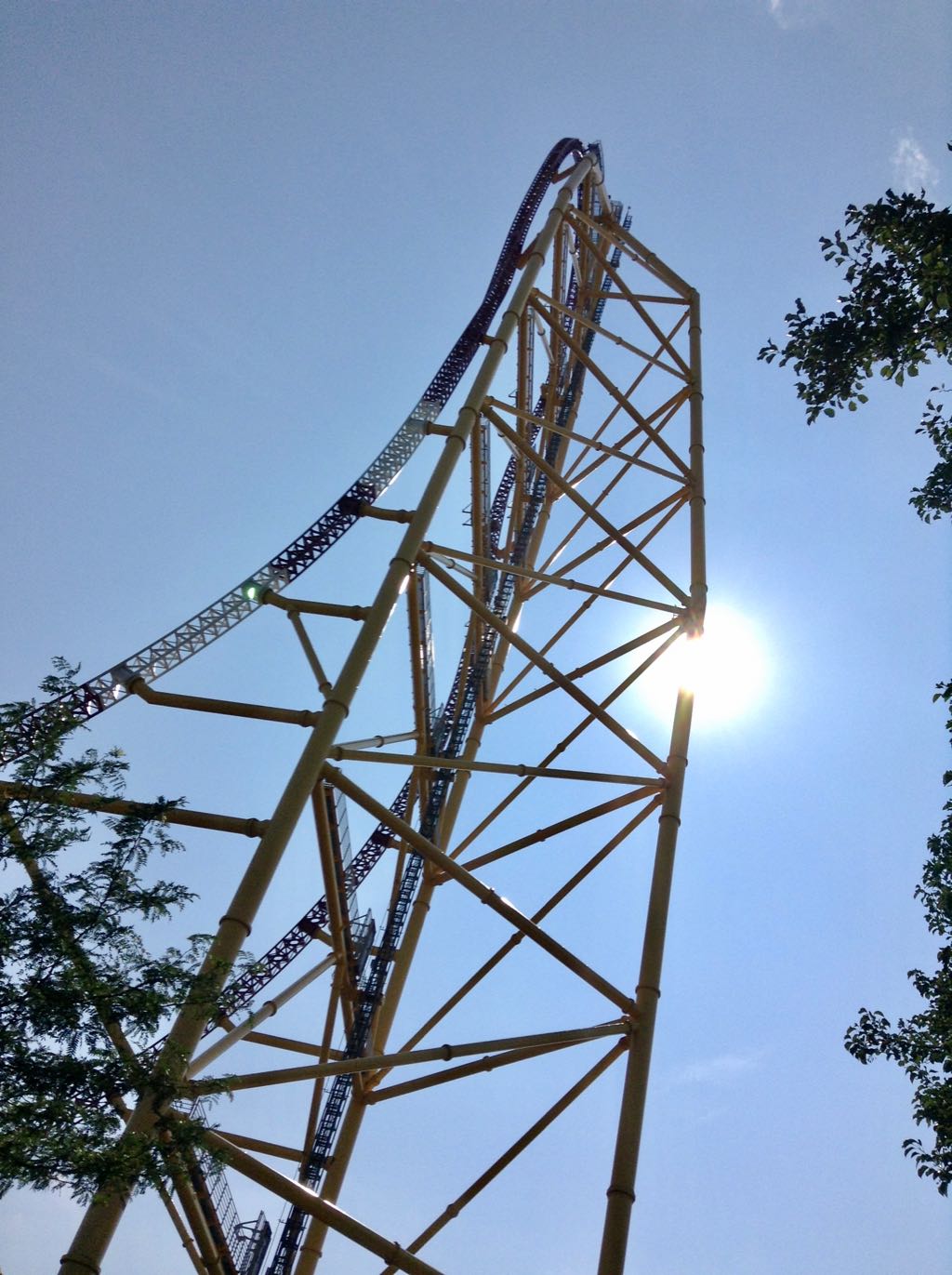 From the Witches' Wheel queue we got a nice look at the 400-foot-tall Top Thrill Dragster ride, here being severed by the sun. 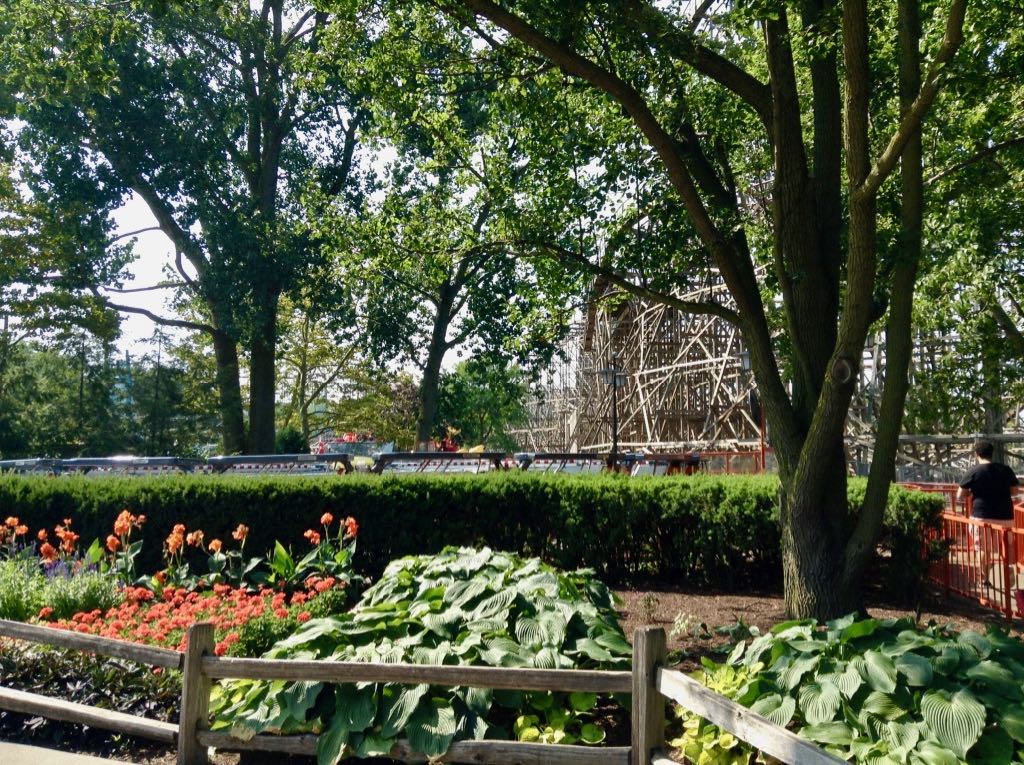 Flowerbeds and the Witches' Wheel ride, on the ground, in front of Gemini. 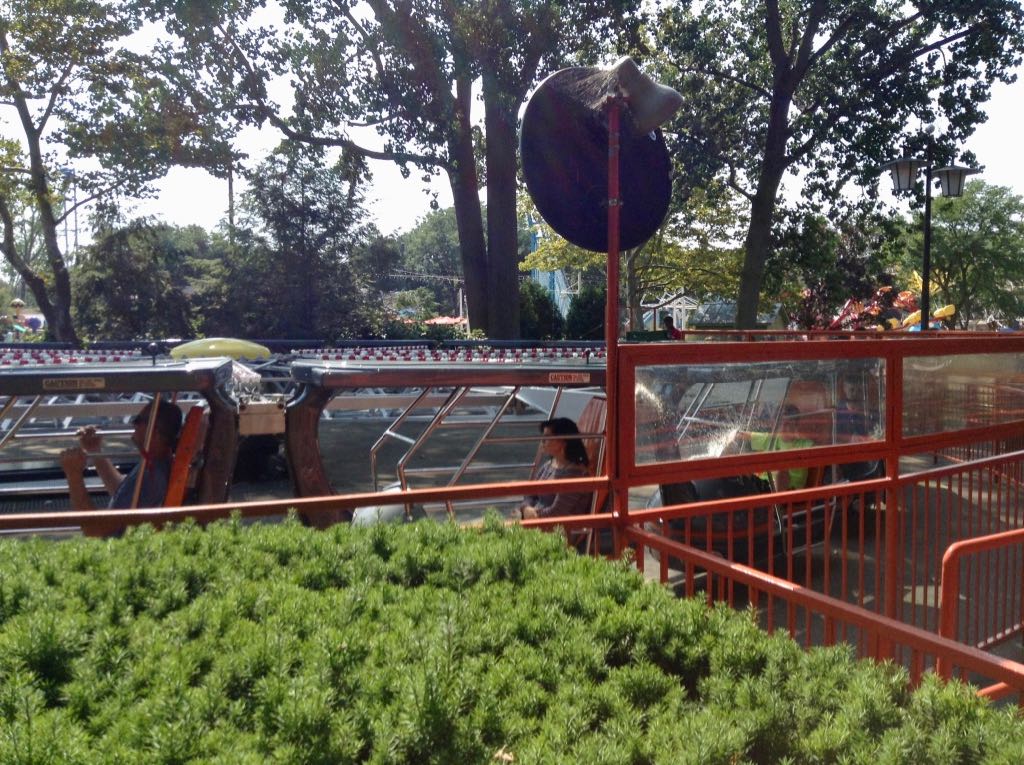 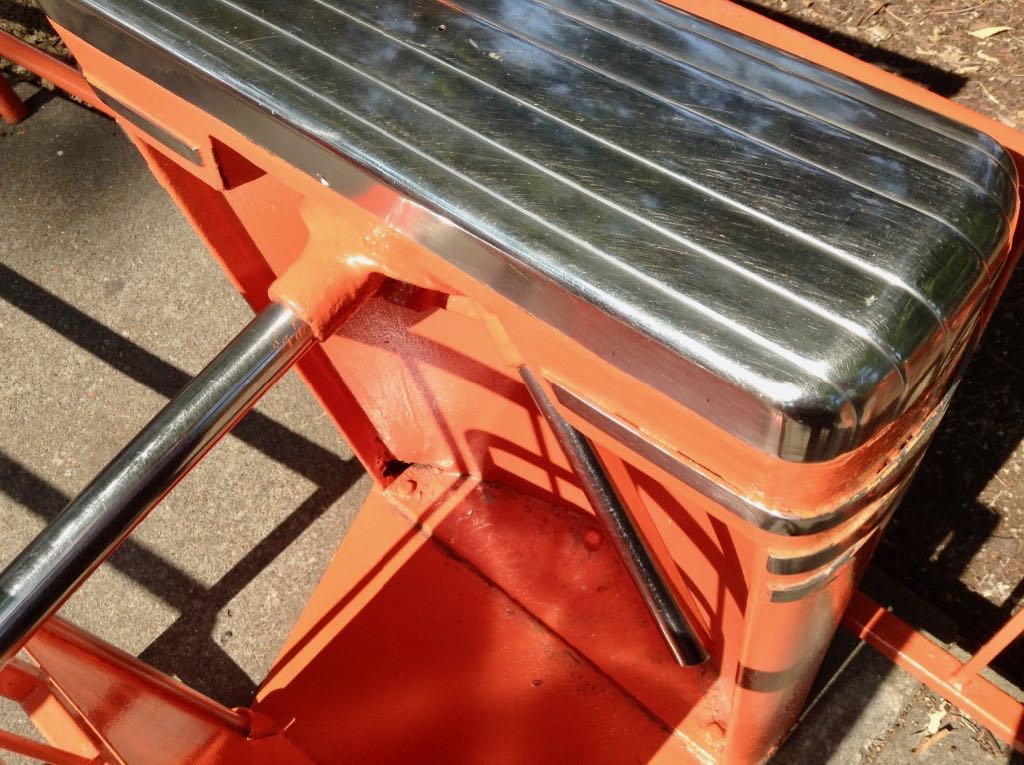 And what the heck, a turnstile that's also painted orange to match the ride. 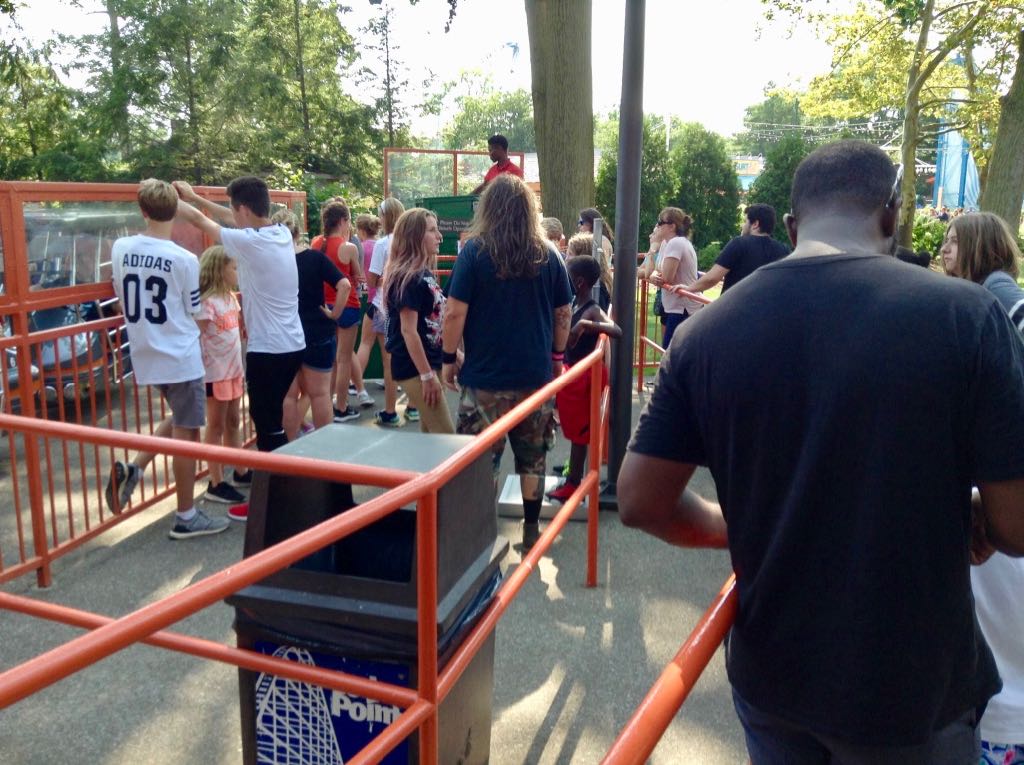 The small switchback area for the Witches' Wheel queue. It only really filled up for Halloweekends, when everybody in the world would be at the park. 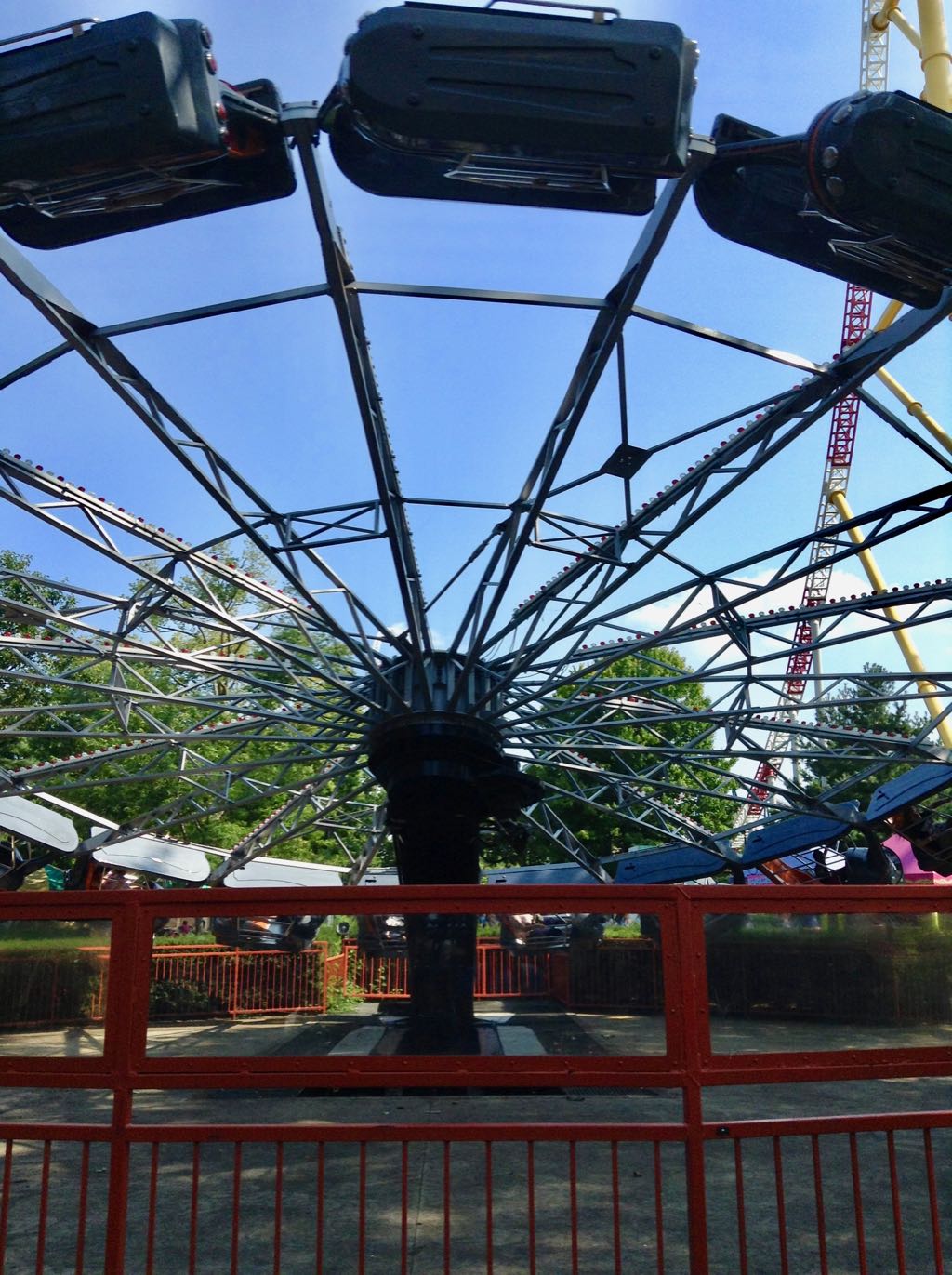 Witches' Wheel was an Enterprise ride, which is one of those rides in recession now. But it's your classic cars-on-a-wheel kind of ride. 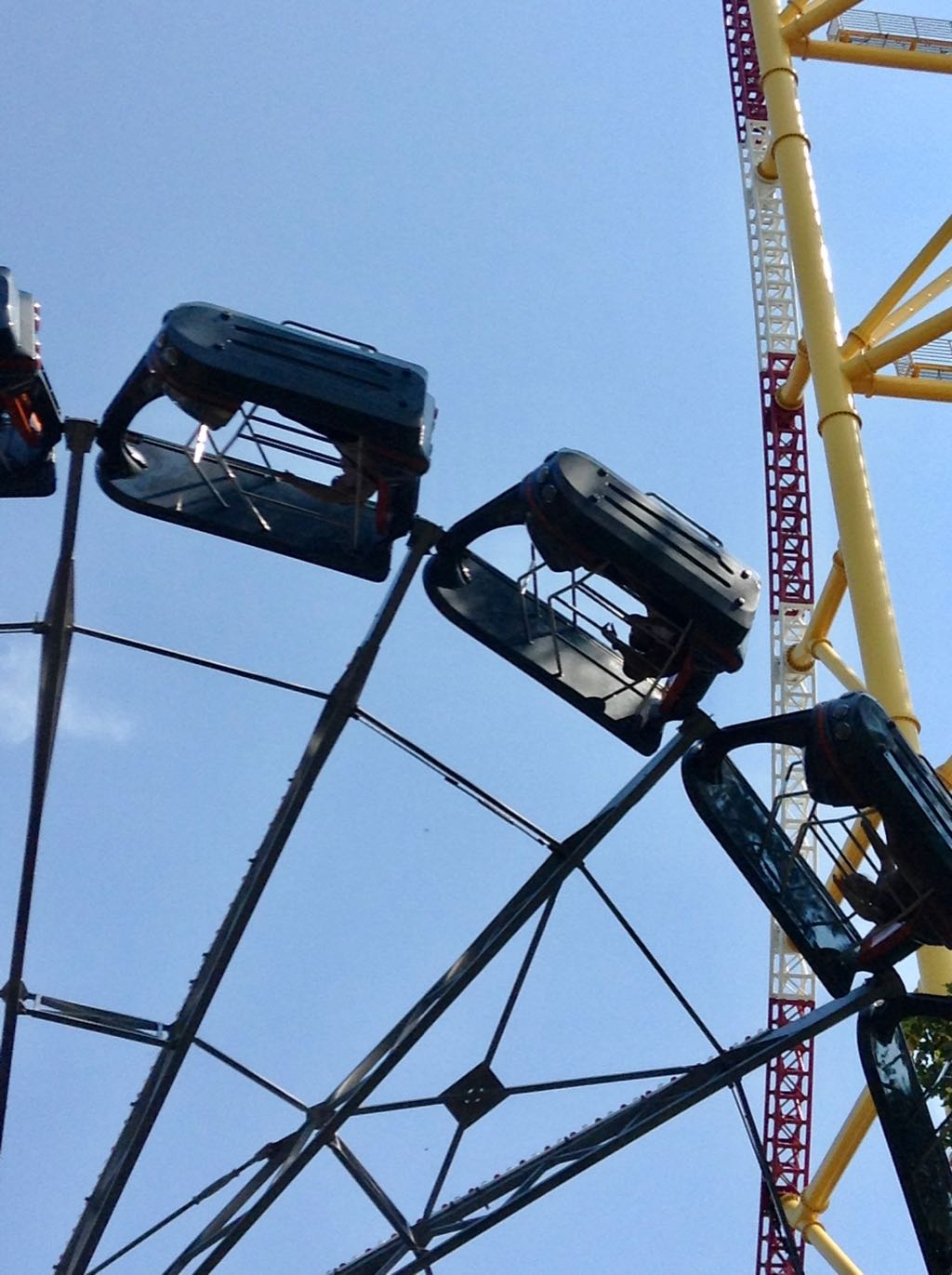 And yeah, the cars go upside-down, as you see here against the ascending hill of Top Thrill Dragster. 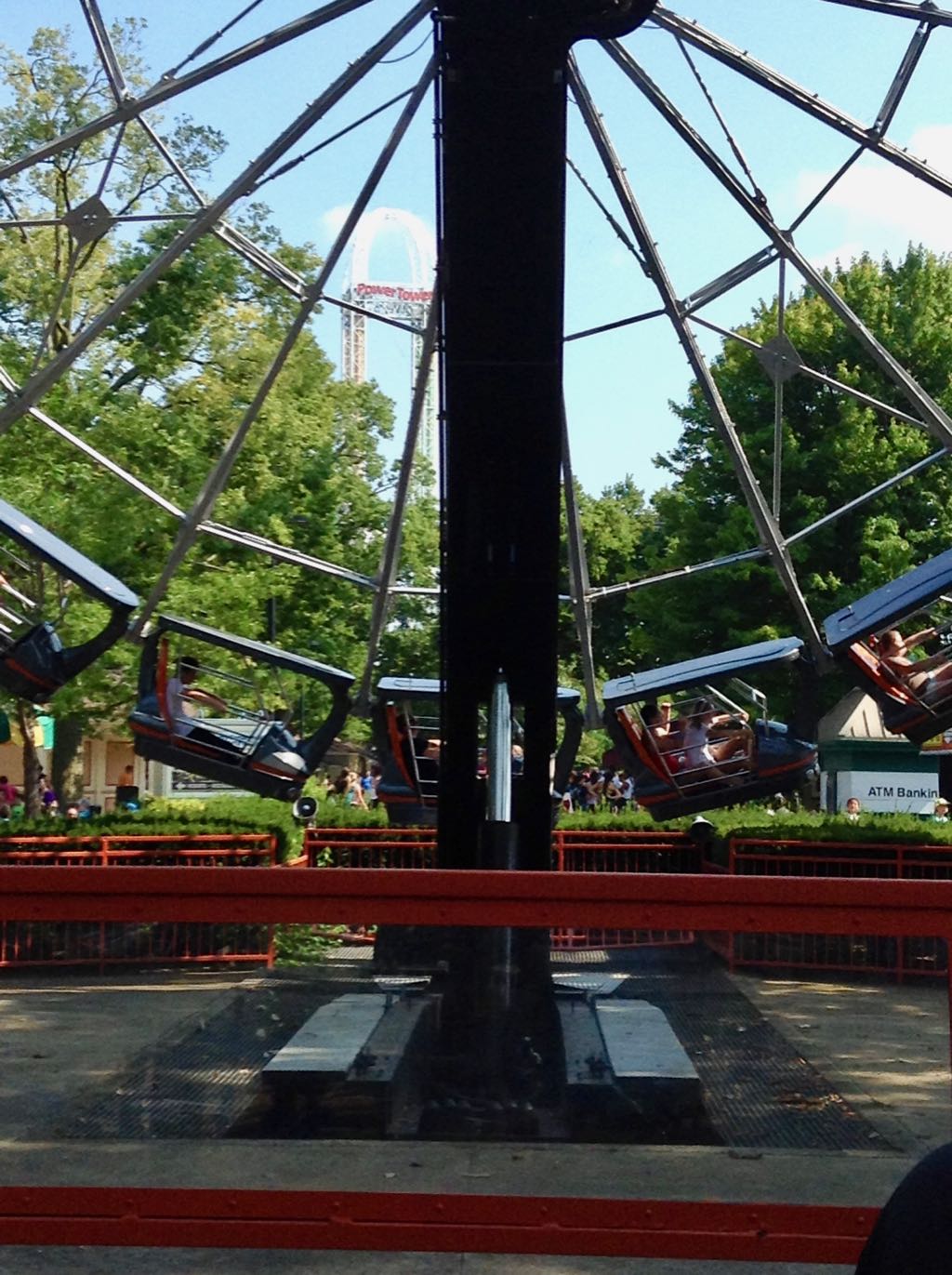 Witches' Wheel at full elevation, centered on the arm that raises the thing up. The Power Tower drop/launch tower is in the far background, a good fifteen minutes' walk away.

Trivia: The time between the explosion of Apollo 13's oxygen tanks and mission control declaring that they were thinking to use the Lunar Module as lifeboat for the mission was about an hour and a half. Source: Where No Man Has Gone Before: A History of NASA's Apollo Lunar Expeditions, William David Compton.