Someday, everything is going to be different when I paint my masterpiece

So dingbats who figure my parents should die in order that they get to go to TGI Fridays NOW NOW NOW NOW NOW converged on Lansing to protest how the Governor's actually trying to solve the problem. It was a lot of people driving around and honking horns. We're about three miles from the capitol but could hear them from upstairs. It took restraint for me not to go downtown and start coughing on their car door handles, but I am trying to cut back on things that will escalate to fights. Still not sure I made the right choice.

In ... happier? ... news, Cedar Fair announced that everybody who's got a 2020 season pass will have the pass extended through 2021. So, on the one hand, that's great: a free year of Platinum passes and we can certainly make enough trips to Michigan's Adventure, Cedar Point, and maybe Kings Island or Canada's Wonderland, possibly even Dorney Park, for that to be a great benefit. On the other hand: this means they're expecting the 2020 season to be cut short enough that passholders would feel cheated. This is going to be bad for the Cedar Fair chain. It's going to be an order of magnitude worse for the independent parks.

On to pictures. I've got what they call a real switcherooni for you, in the pictures today. It's neither a pinball thing nor an amusement park! Instead, there was this little sidewalk art show thing going on at the bars and surrounding buildings a couple blocks north and one over from us. It's basically the place we hang out all the time anyway. They got a fantastic summer evening to do it, too, so let's look back at one Friday in August of 2018. 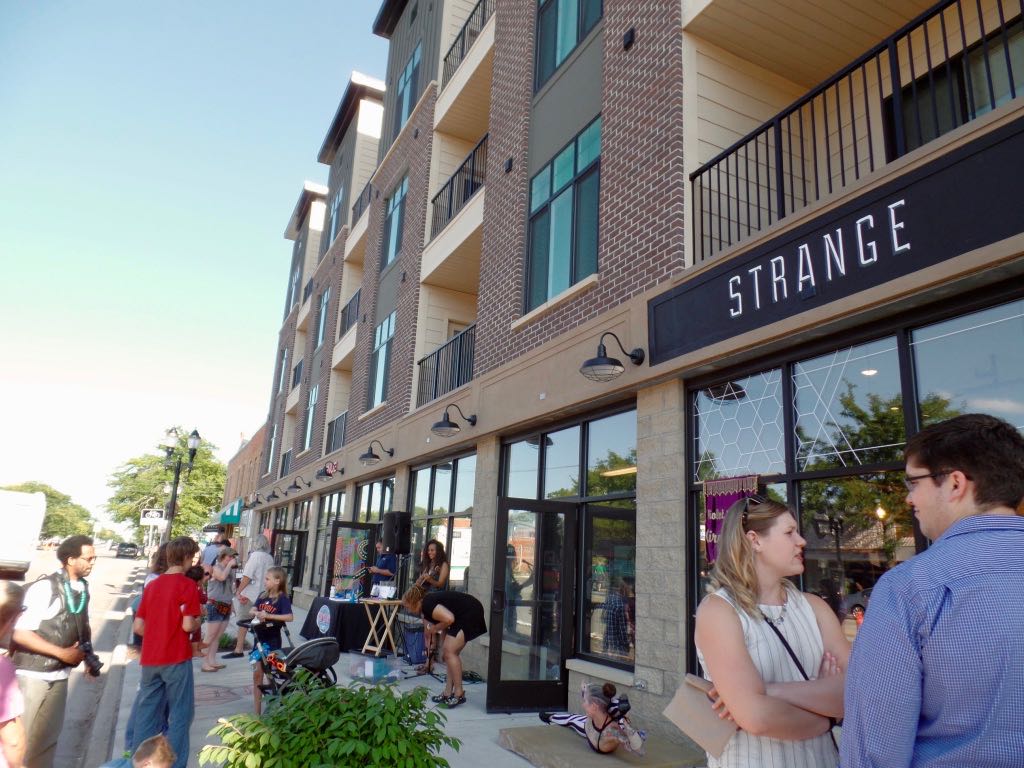 The sidewalk art show as we first got there. The four-storey building here is The Venue, construction of which obliterated nearly all of that block, including buildings and businesses over ninety years old. Strange Matter, there, was the only business tenant in the summer of 2018; today, it and a boxing center are the only tenants. 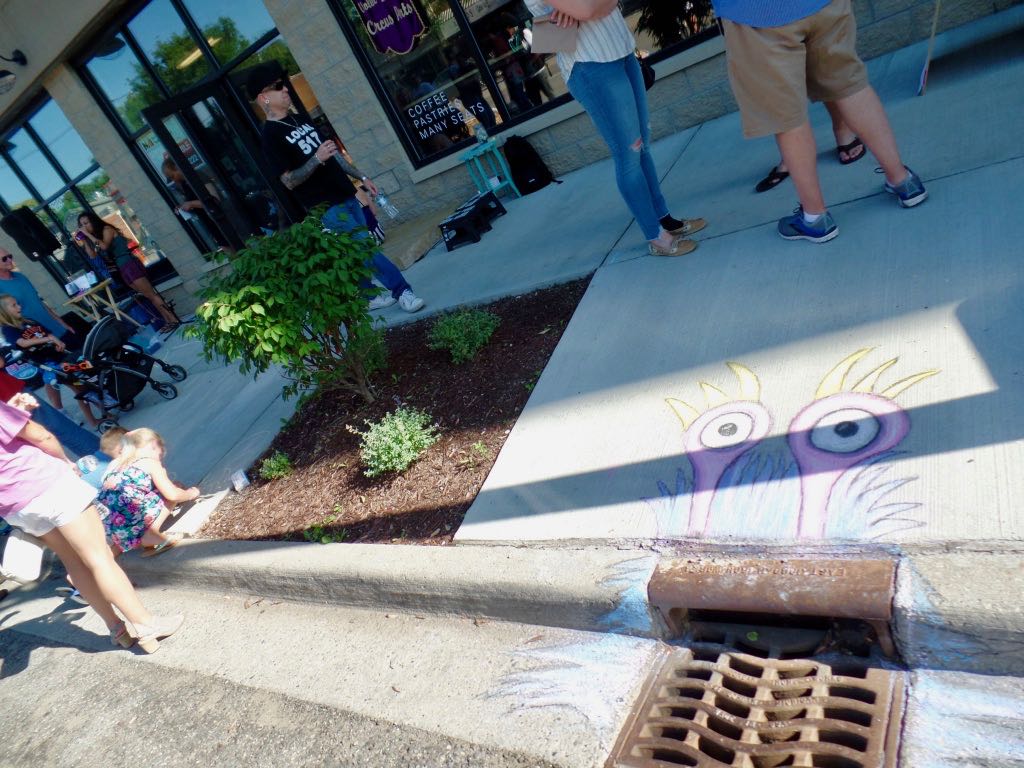 They provided sidewalk chart and people got to drawing. 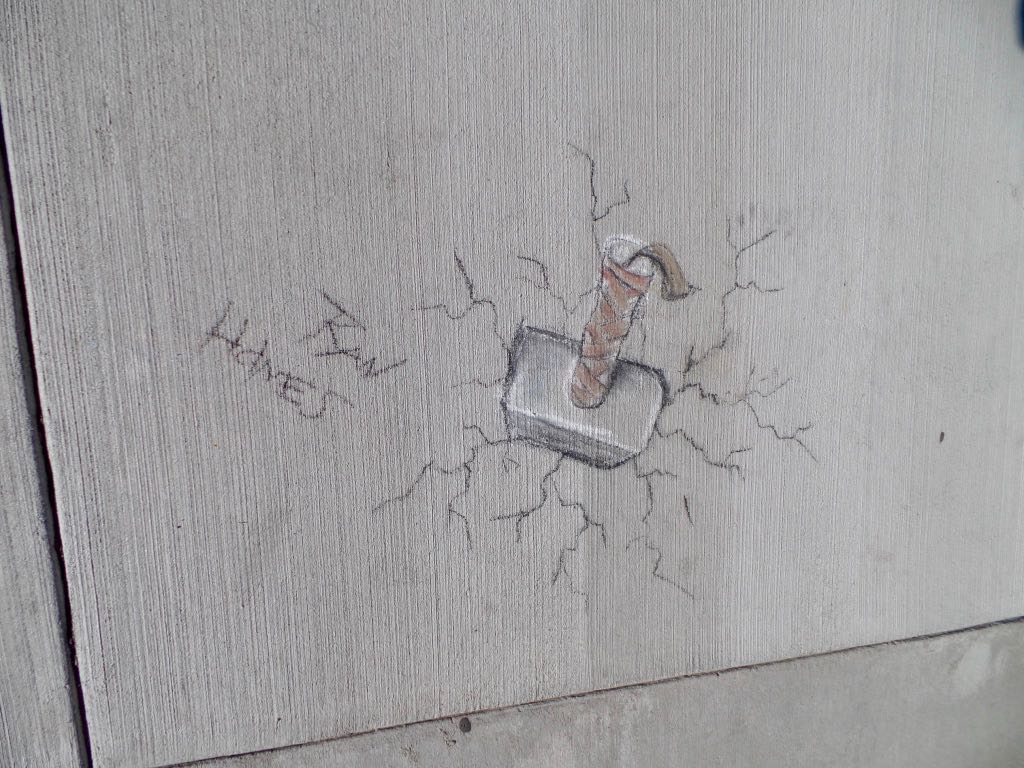 Someone having a bit of fun with a perspective drawing. 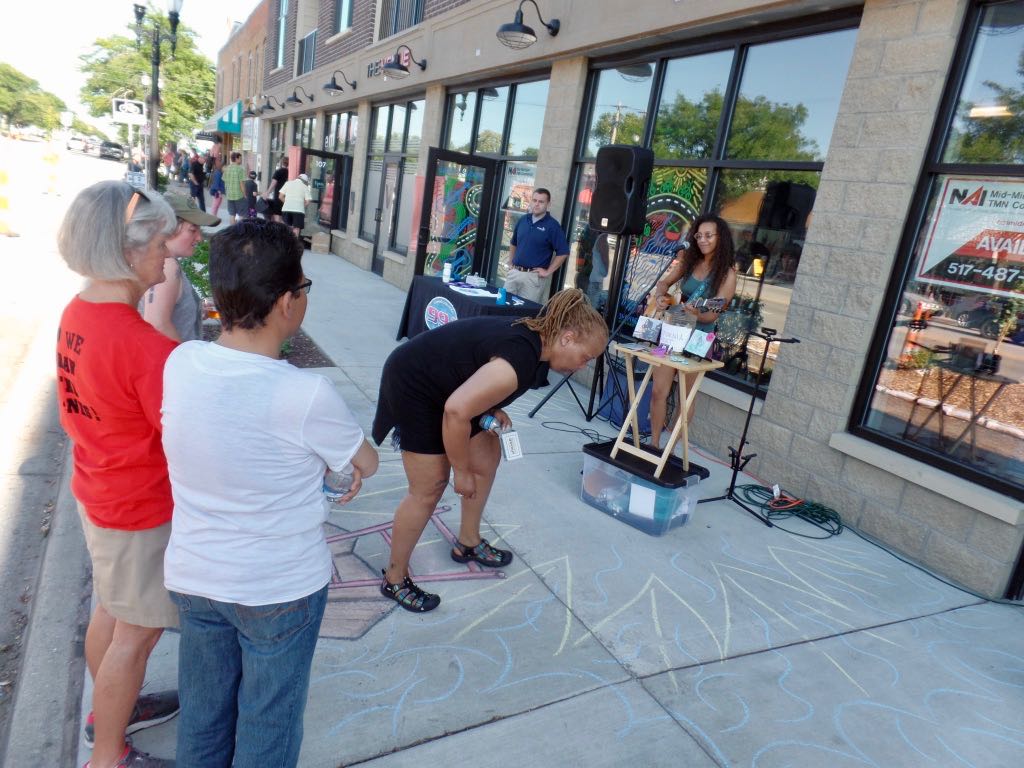 People gathered around a guitarist. You can see a couple sidewalk chalk projects here. 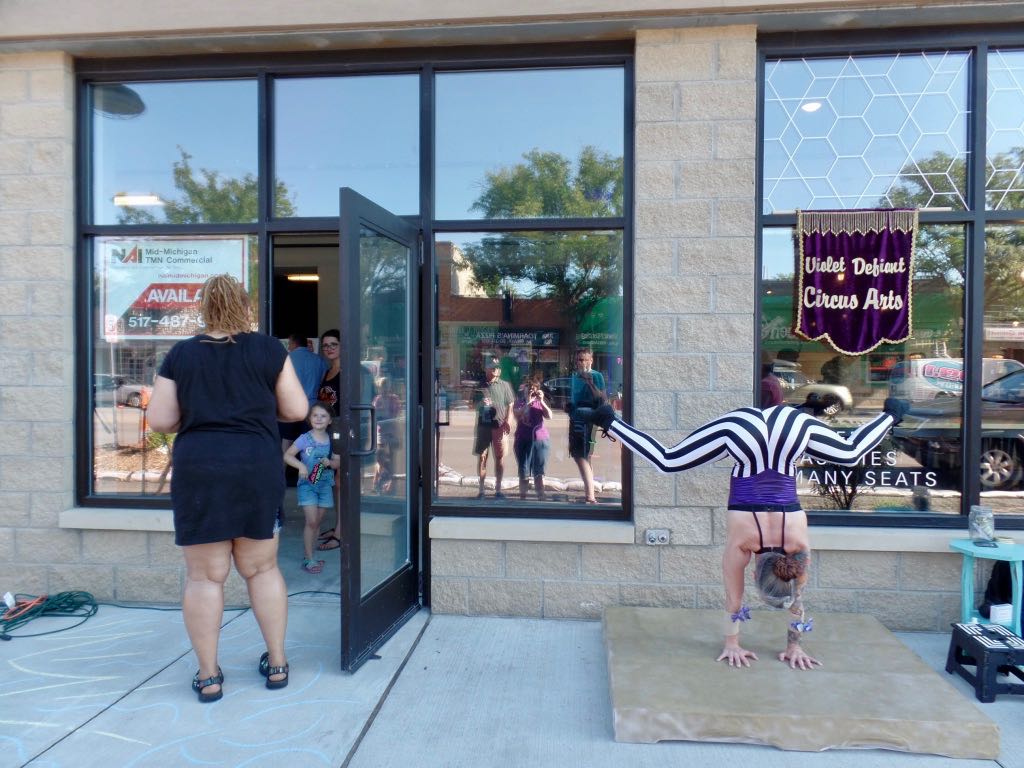 A contortionist does a handstand, as part of the shows. 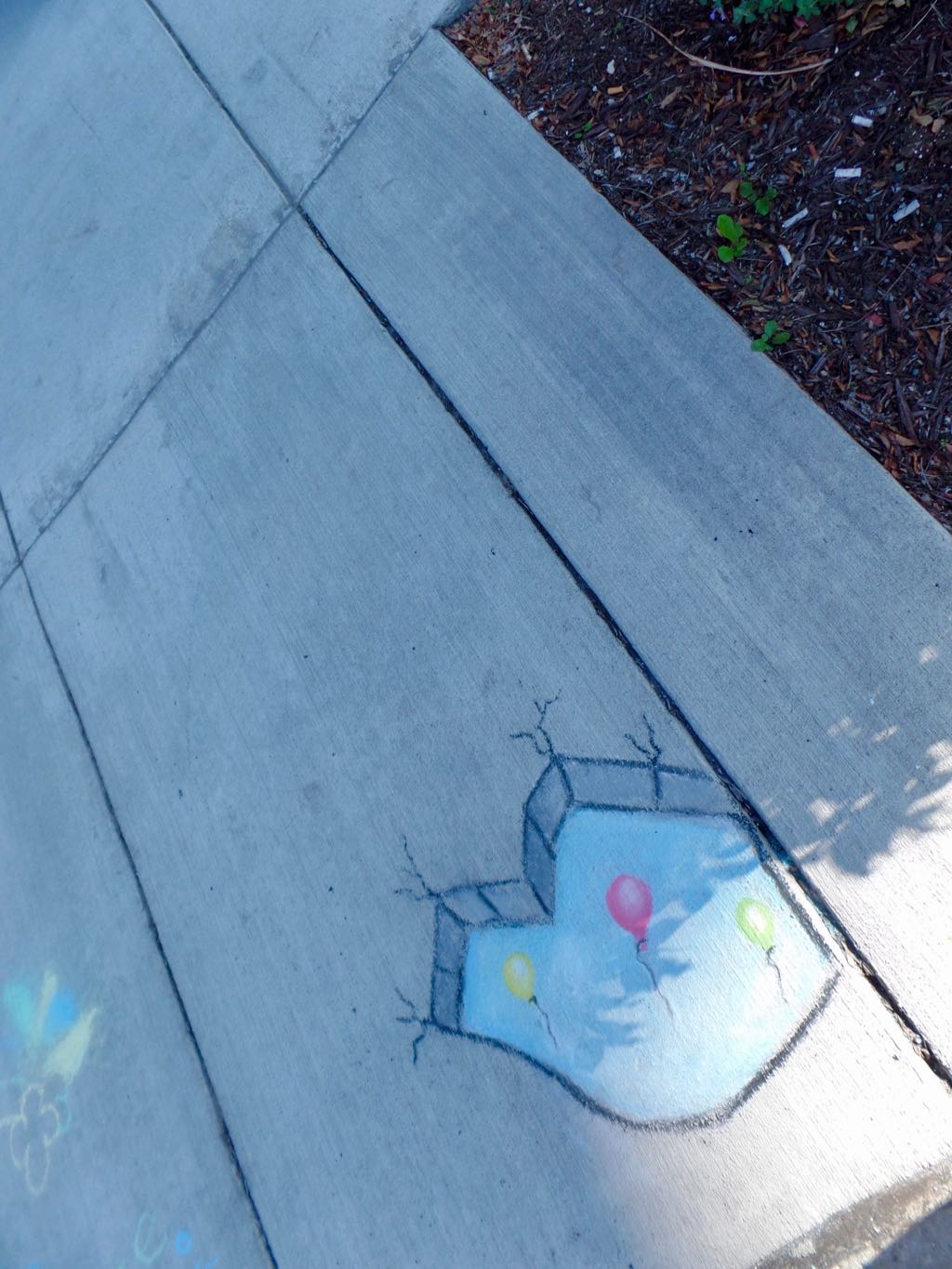 Balloons seen through a crack in the sidewalk. 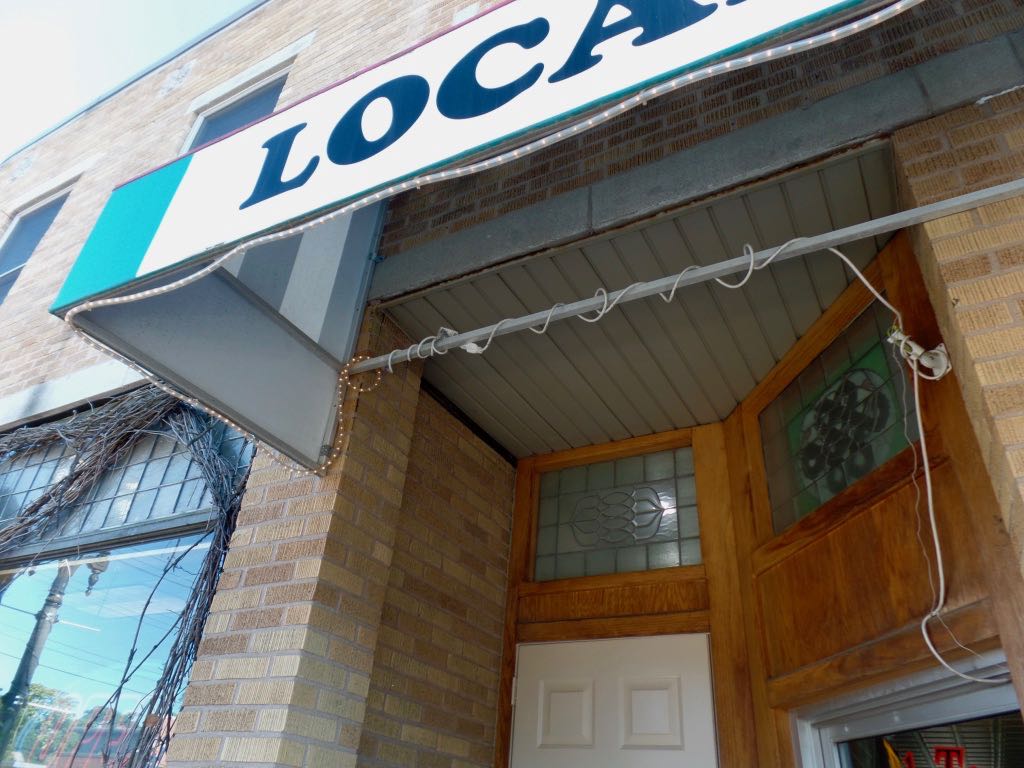 Two buildings on the block were not demolished. Here's the windows above the door for one of them, now a tattoo parlor. It's some neat glass work, though. On the left is one of those shops selling things you give to people who need to have more stuff to dust. If I have the place right, it used to be a shop that sold United Nations-themed merchandise for some reason. 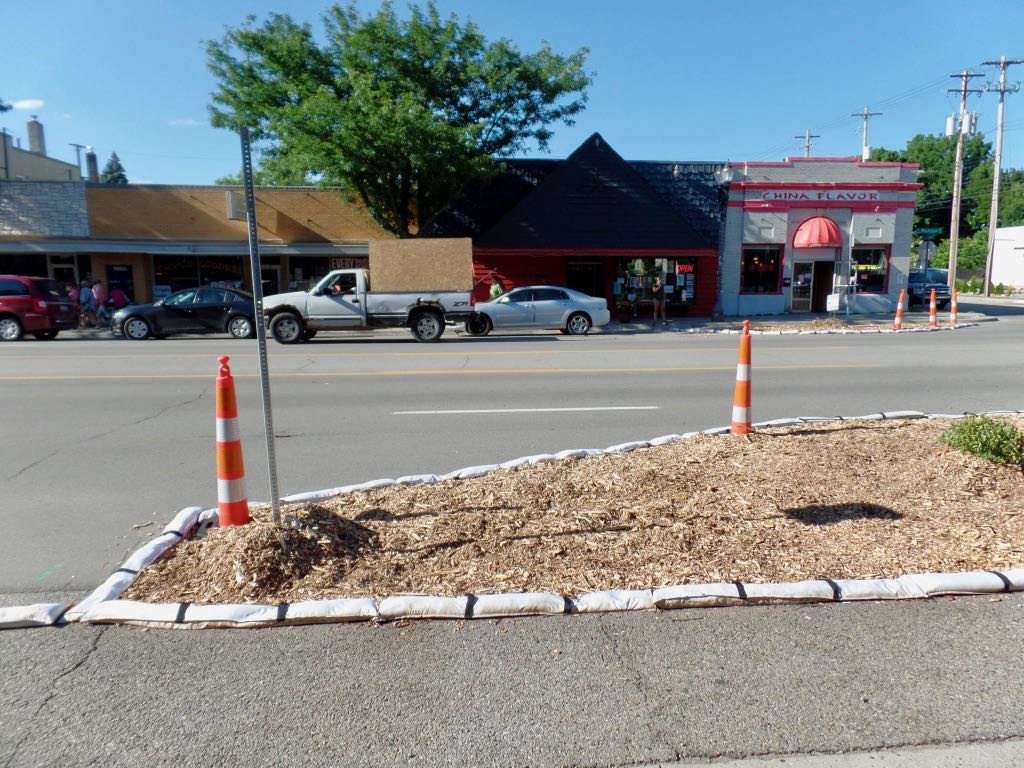 Looking across to the north side of the street. The sign-less black-and-red building, just left of China Flavor, is the hipster bar where we play or hang out pretty much every week. Or did. To the left of that, the blond brick-topped building, is Everybody Reads, the fusion bookstore/comic book shop/hippie-stuff shop that's ... not quite as good a place as you'd think, but is awfully good to have around. 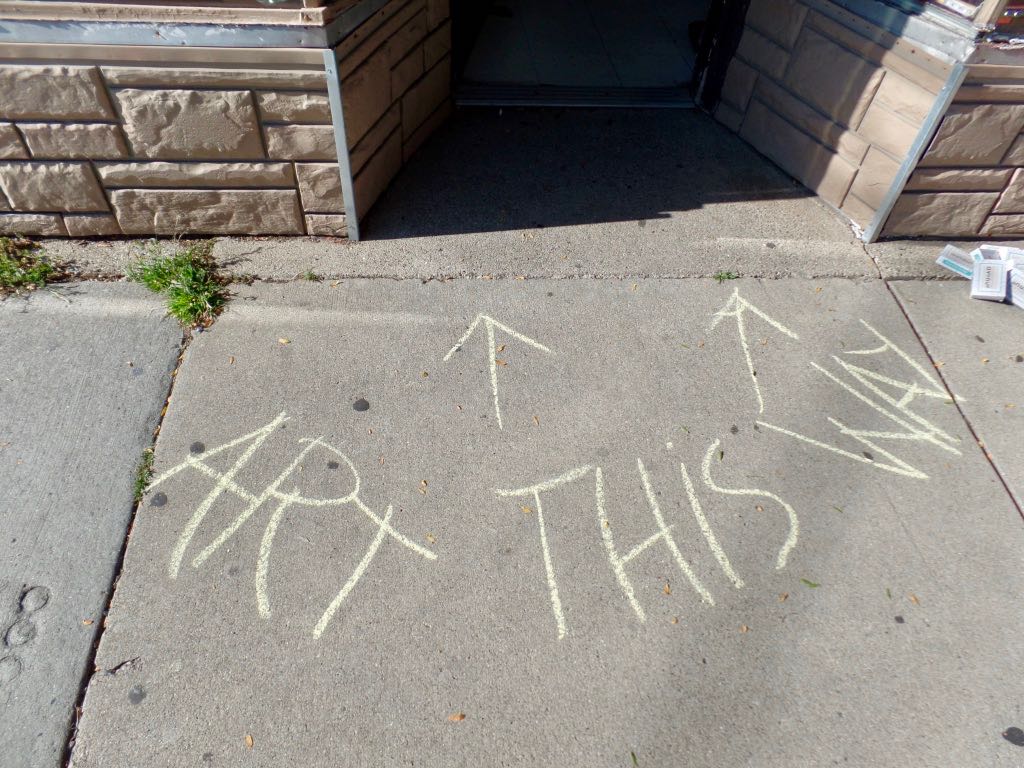 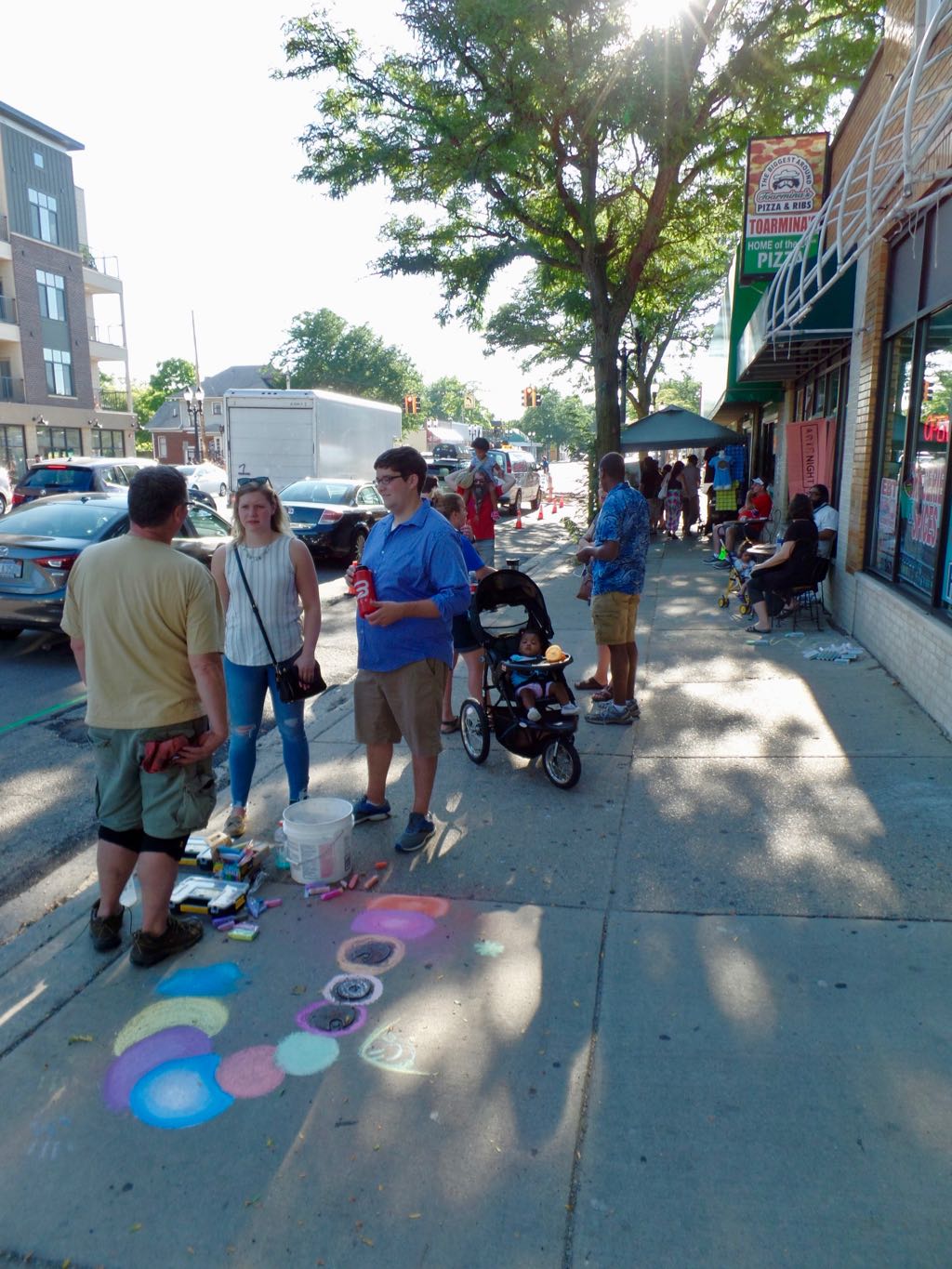 Sidewalk chalk artist caught in the middle of making an arch of bubbles. 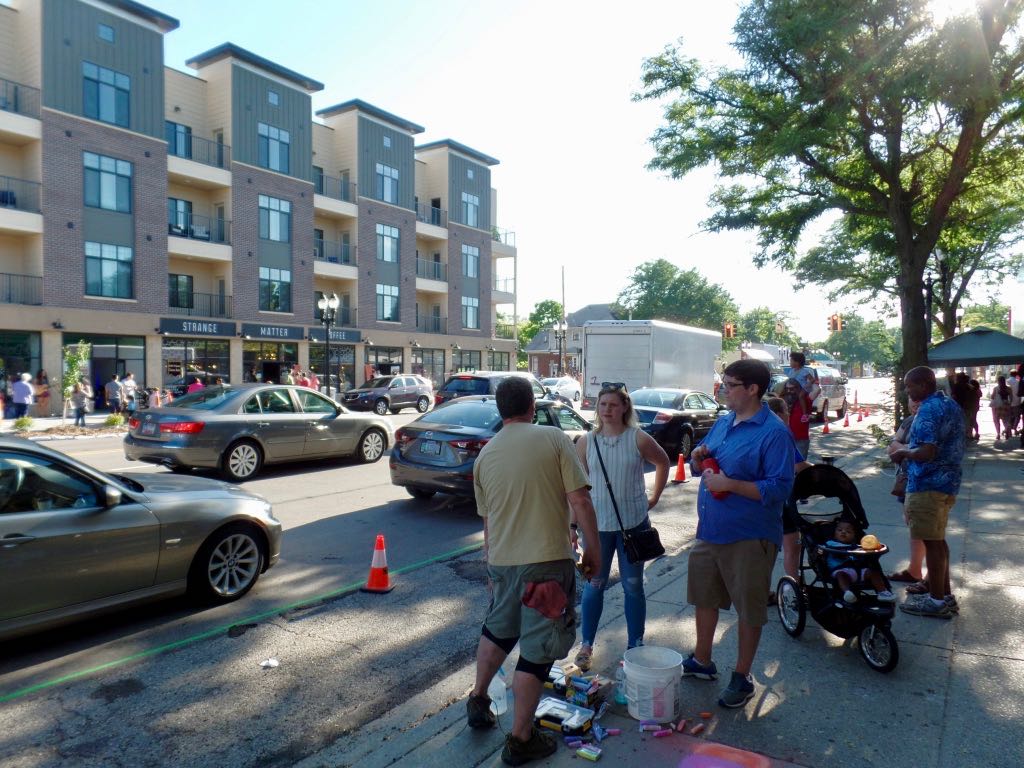 And looking to the southwest from near our hipster bar. 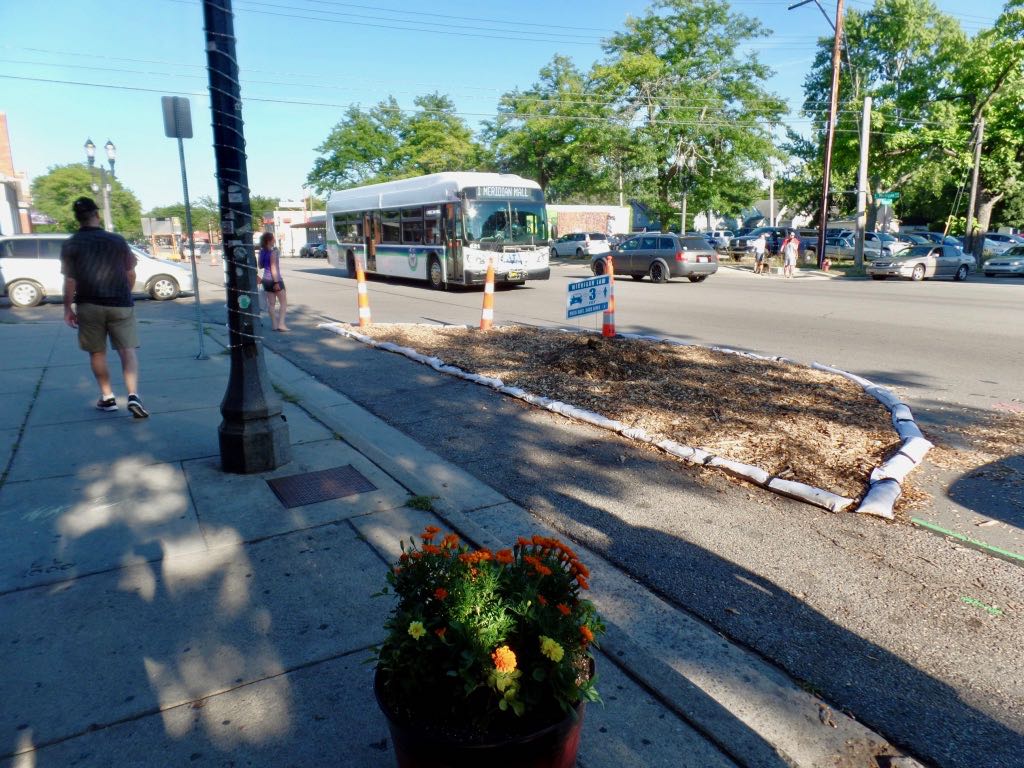 That summer the city ran this experiment with putting in protected bike lanes on the avenue; these little mulch islands with sandbags bordering them were used to separate the bike lanes from traffic, and to help create some tiny park spaces. 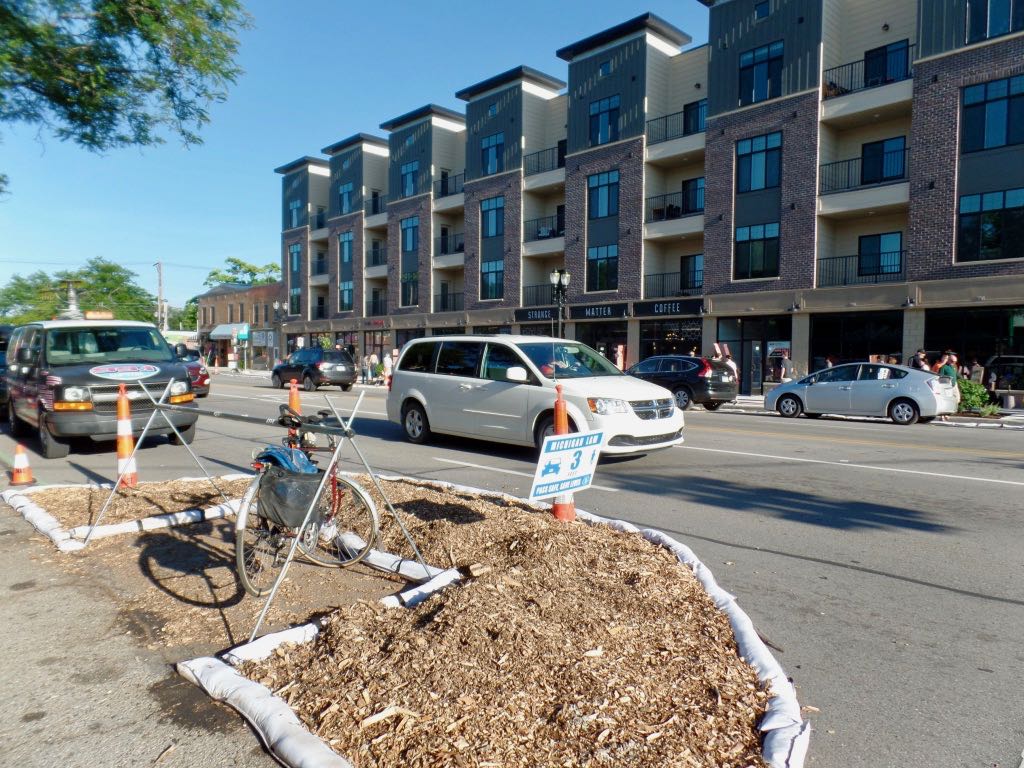 I thought the protected lanes made for a pretty nice arrangement. I say that, though, not knowing whether it made rush hour traffic noticeably worse; I just enver had reason to drive down this street around those hours. They didn't repeat the experiment, but it can take a long time to change road use, especially if it's anything which threatens car people with the idea of not-car activities in the road. 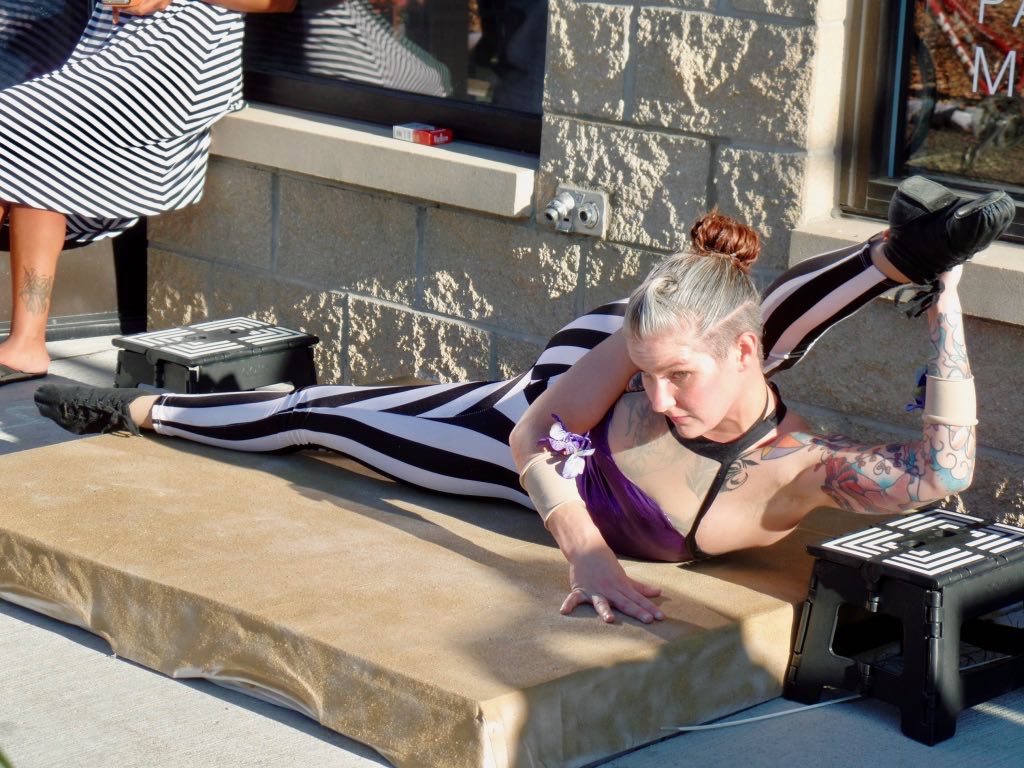 Contortionist pulling her leg behind her shoulder and yet not tearing herself apart, somehow. 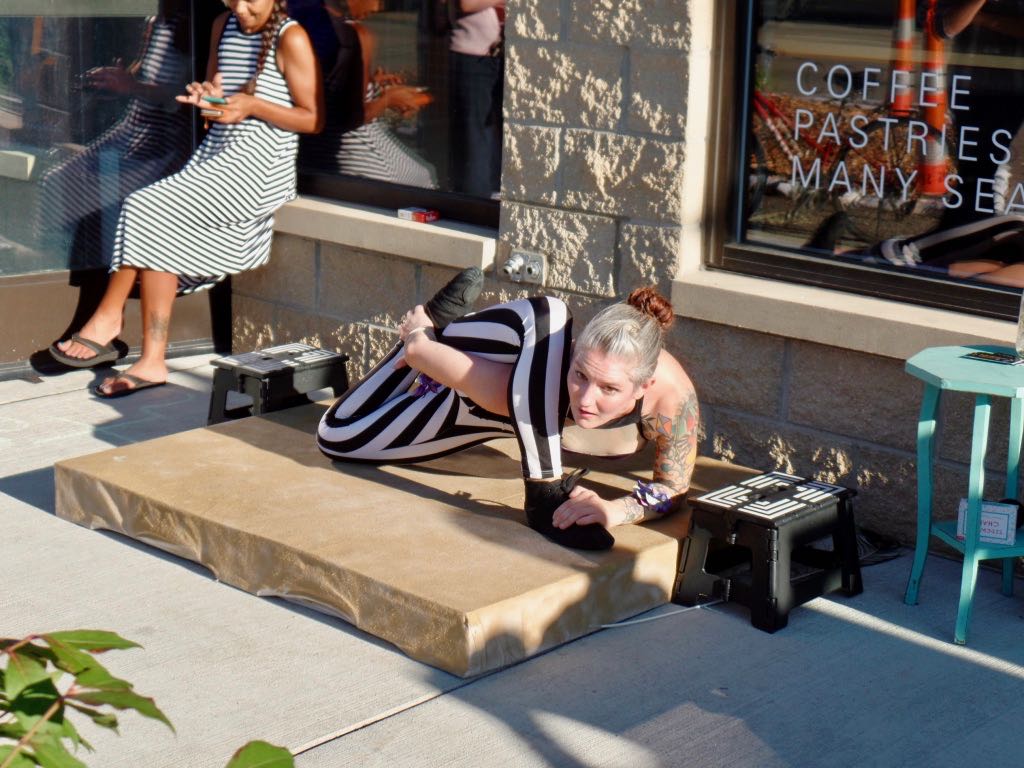 And now she's got her legs an arms all crumpled up. As a person who lacks hamstrings myself I can only imagine what this has to feel like. 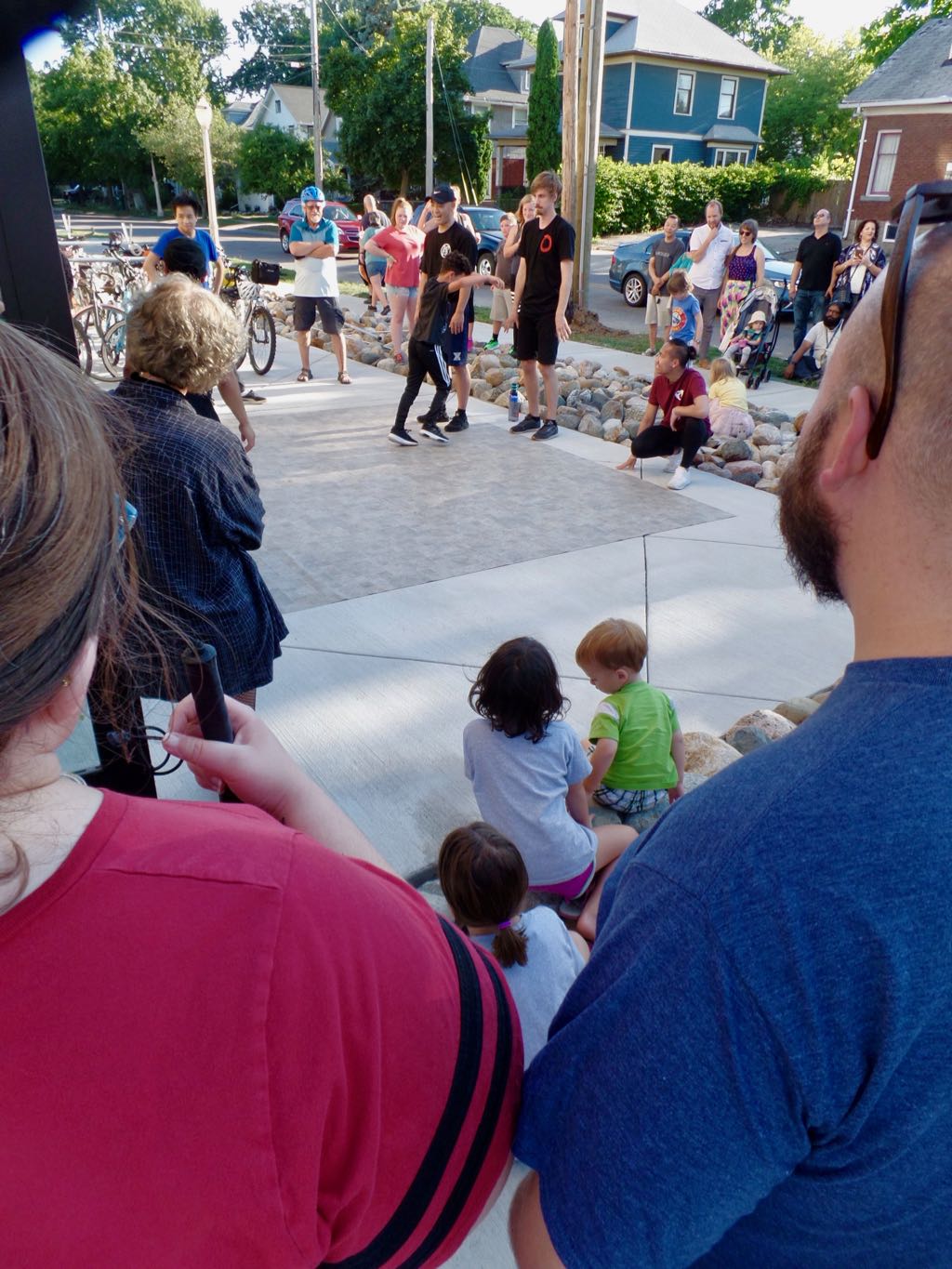 Street dancing show, maybe competition, going on in some empty space on the west end of the block.

Trivia: The sequence to restart the Command Module computers was read up to the Apollo 13 astronauts about fifteen hours before reentry began. Source: Where No Man Has Gone Before: A History of NASA's Apollo Lunar Expeditions, William David Compton.

PS: How March 2020 Treated My Mathematics Blog, Finally, as I close out that month.