We have been much better this year about having Movie Night, normally Wednesdays. Mostly they've been pretty good films, or at least delightful: Little Fugitive, This Is Spinal Tap, Flash Gordon, Demolition Man. Even the ones that aren't good are at least delightful. This week, we watched one that we knew was going to be bad: Pickup Summer, or to the use the name that made

It is a ``teen'' sex comedy, made in 1979 and released in either 1980 or 1981 depending on what source you trust. Obviously, not a major release, although basically the whole crew also made My Bloody Valentine which I understand is a well-regarded slasher movie. The movie is split between being pleasantly stupid and being offensive. The offensive stuff is, like you figure, the treatment of women, who mostly get to be the things that the player-characters fight over. And, occasionally, who get to go topless. Less than you'd think; the DVD has the trailer and it sure seems like that shows all the breasts you get.

When the movie is content to just be about Very Old high schoolers doing summertime nonsense it's stupid but generally watchable. Its greatest problem is that the leads are awful, awful people. I realize this is endemic to the teen sex comedy genre (and, for that matter, 70s films), and that they were probably aiming for ``our protagonists are scamps, always pulling shenanigans''. Thing is, they forgot to set up that the victims of these pranks do anything to start it. Like, there's a runner where they keep harassing the Rich Kid. I understand the genre convention here, the Rich Kid is an annoying snob who deserves to be taken down a peg. But all we actually see Rich Kid do is boast that his daddy bought him a second Cadillac, and ask if the protagonists had spent all their quarters at the arcade. Fair start, but that doesn't put moral balance on recording him making out with his girlfriend and then broadcasting that to the cars at the drive-in theater.

Also, no, the protagonists did not spend all their quarters at the arcade. While the movie was originally called Pinball Summer, and what plot there is circles around a pinball tournament at Pete's Arcade [1], we get like one scene of the protagonists playing pinball before the movie's climax. And that at the diner, not the arcade. Pete gets a reasonable-looking trophy for the tournament. The head of the local biker gang steals it. Our heroes steal it back and hide it inside the diner pinball machine. Pete's assistant Whimpy [sic] finds the trophy and tries to use it to buy his way into the gang. Pete finds the trophy and keeps it secure the rest of the movie. That thread takes about half the run-time and maybe ten percent of the volume of the film.

[1] This was delightful and distracting since the center of Lansing and Ann Arbor pinball is Pinball Pete's arcade.

Also, weirdly, the biker gang is somehow the most likable set of characters in the movie. I mean, they aren't good or pleasant people, but there's never the hint that they're just talking to a woman so she'll let her defenses down and they can make out. This is a pathetic standard to meet, but, circa 1980 teen sex comedy. You take what vague semblance of decent behavior you can get.

So little of the movie is pinball that we had to wonder if they tried to rejigger the film as video games started cleaning pinball's clock. But then why not replace the big tournament at the end with an arcade game tournament? It wouldn't make any difference to the plot and barely any difference to Whimpy's plan to rig the tournament. The movie has some traces that look like it suffered emergency plot surgery. There's an early scene where the mayor's wife takes umbrage at the arcade and those hoodlums hanging around it; that's never followed up on. And then there's Arthur ...

So, what pinball there is, is surprisingly authentic. The games at Pete's Arcade and at the diner are ones that would really be on location circa 1979. More, they use the actual sounds of games, rather than generic bells and buzzers. I know the tune played by a Bobby Orr's Power Play starting up, and that's what it played when the game started up. And when they show actual pinball play, in the big tournament, it's legitimate play, and pretty good too. There's even a strategically correct bit of cradling, bringing the ball to rest on a flipper and waiting to aim your shot. This was a surprise since we had understood cradling to be a little-used technique back in the day. You do not expect a movie this stupid to serve as accidental documentary. The credits list a pinball advisor, Jill Golick. The name is not in the International Flipper Pinball Database's records, but that just tells us she(?) hasn't played in competition in, like, the last fifteen years. Still, they got a pinball advisor who apparently knew the business.

There's two exceptions to this real-pinball stuff. One is in the climax; the big tournament is on a fake game called Pinball Summer, with art showing off scenes from the movie. This ought to read as a sort of joyful, lightly reality-breaking moment of transcendence for the film, although to reach that point the movie would have needed something it could call back to. Right up front, though, in the diner to start is a fascinating game given the backglass of Arthur: The World's First Talking Pinball machine. The game makes some call-outs, as we'd say today, telling the player they have to shoot the ball, or scolding the player for nudging hard enough to earn a tilt warning. This is astounding; it's something just barely within the realm of possibility for 1979 (Gorgar, released that year, was able to say something like six words, though they remixed into several tolerable sentences.) A game talking back to the player is always a great idea, and it would a decade later be done to perfection in FunHouse, with Rudy.

It's weird to have the game established so clearly up front, and with what would be a pretty impressive gimmick for the moment. It reappears at the end, as they're all chasing the bikers for the trophy. For some reason some of the gang is driving a flatbed truck with Arthur, set up and standing on truck bed, with the newly-crowned Miss Pinball beauty pageant winner (did I mention there was a beauty pageant, and the trophy winner got a date with her?) sitting across the table, which thrusts back and forth in the truck bed for some reason. It feels like something that was meant to be part of the movie and then got incompletely cut out.

So, with this movie we finally have the film we'd choose for The Flophouse podcast, if we ever won a name-the-movie contest for it. Also, to use their rating system, we would call this a good-bad movie, albeit with reservations. The reservations are it's got a lot of really bad treatment of women. When it's not doing that, though, it's mostly just dumb, with occasional bits where something fun happens. There's even a couple of jokes that actually land, such as the lead biker sputtering after one of the protagonists drove his motorcycle into the lake, ``You drowned my bike! ... It doesn't even know how to swim!'' So, it's a movie on that level. Glad we watched, kind of sorry not to have live-tweeted it.

Trivia: In 1982 the Hilton Hotel in Rye Town, New York, opened Bagatelle Place, a formal arcade with 33 video games, a cappucino bar, and a dress code. Source: The Ultimate History of Video Games, Steven L Kent. (Rye Town is near the Rye that has Playland Park but is a different municipality.)

PPS: So the next thing we went to was the Calhoun County Fair.

bunny_hugger's mother, still feeling the pain of her back, did not go, but her father did. I believe we brought home an elephant ear for her. 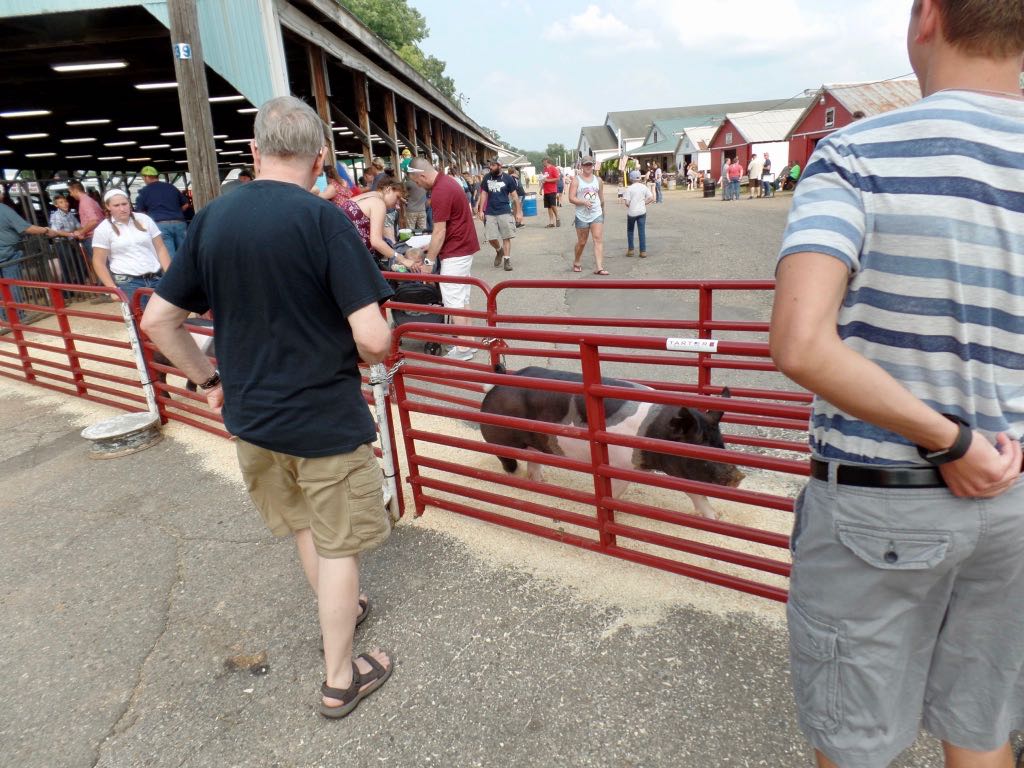 Watching the pigs walk along their gated pathway from the show floor to the barns. bunny_hugger making friends with one of the pigs! 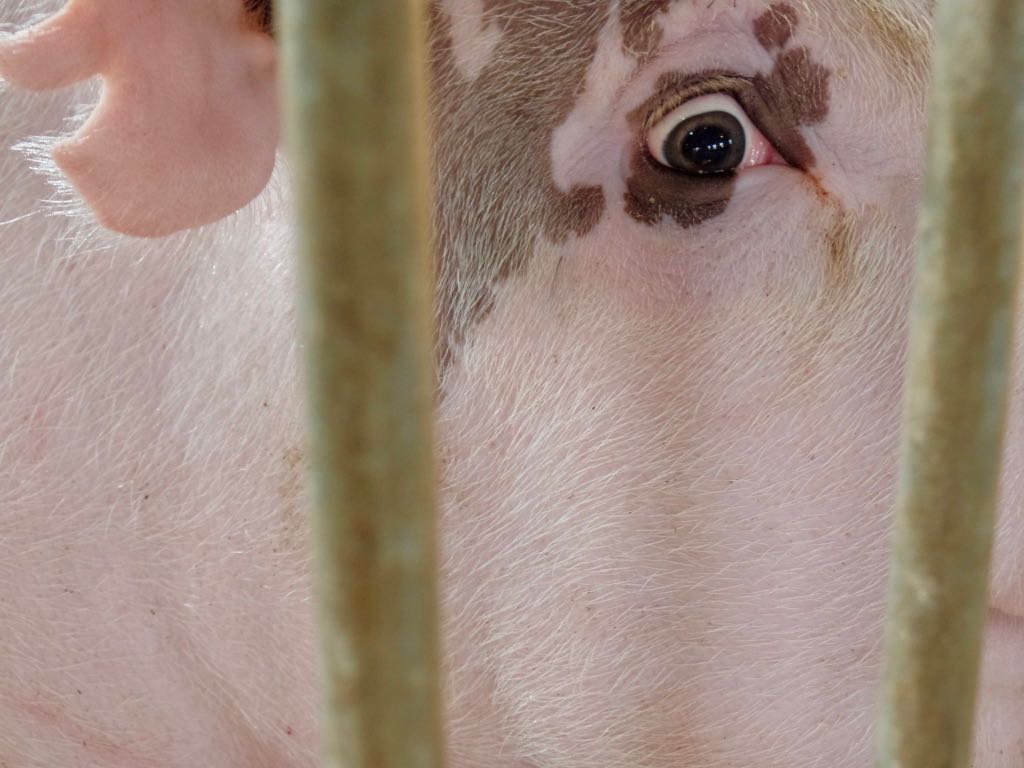 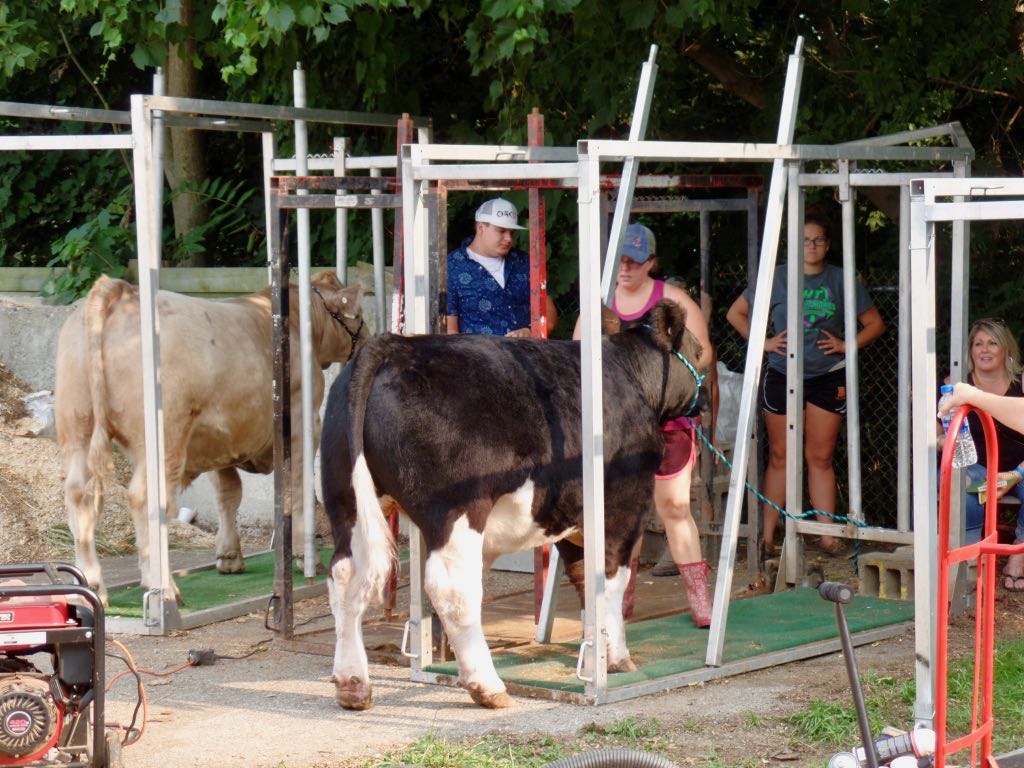 Cows set up in some of the washing stations behind the barns.