Something in the wind has learned my name

So now the really unexpected has happened. Somebody's bought Indiana Beach. Like, somebody that wants to run an amusement park. The company that owned Indiana Beach, in Nowhere, Illinois, and Fantasy Island, in Slightly Less Nowhere, New York, closed them ... sometime before the pandemic. It was what counted as shocking news back then.

So, Gene Staples, from Chicago, bought the place for an undisclosed price. He says he hopes to reopen the park by the 1st of July, which seems hard to credit. But he allowed that if the park didn't open by mid-July, it would punt to 2021. He also hopes to finish the re-tracking of the Hoosier Hurricane wooden roller coaster that the old owners had begun.

Still, that's very hopeful news. The natural follow-up question: what about Fantasy Island, near Buffalo, New York? ... And that appears to be truly doomed. Nobody had bought the park by the time its owners declared bankruptcy. There's reports of rides being moved out of the park, and the state got the company to refund season ticket holders. And at least one of the props, Gulliver, has moved to a private home, I assume legitimately but who can say. I suppose as long as the big infrastructure, and wooden roller coaster, hasn't been torn down it's not hopeless but it's so very little hope, especially in this year.

Nevertheless, it is one amusement park un-stricken, and that is such a very good and big accomplishment for the season.

Now let's get back to the Eagle Harbor Lighthouse, up on the Keweenaw Peninsula back in August of 2018. That whole trip. 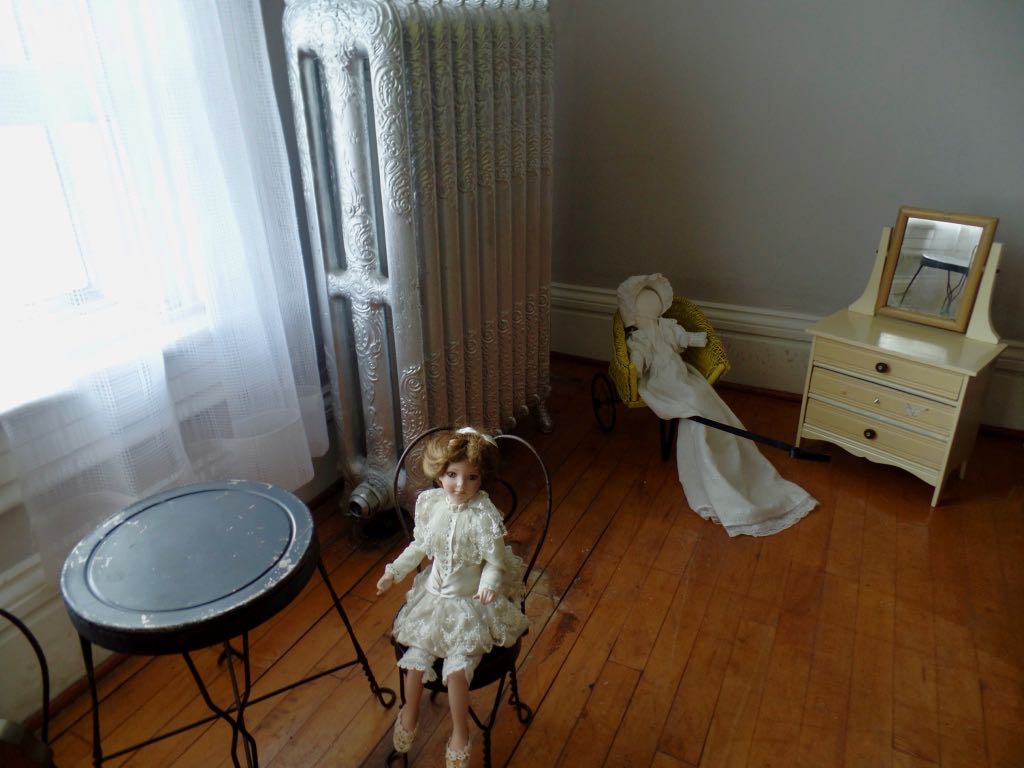 The Eagle Harbor Lighthouse had bedrooms, of course; here's the kids' room with furniture and toys that would seem appropriate to about 1920. I don't know why they picked that era to restore things to, but they have to pick sometime. 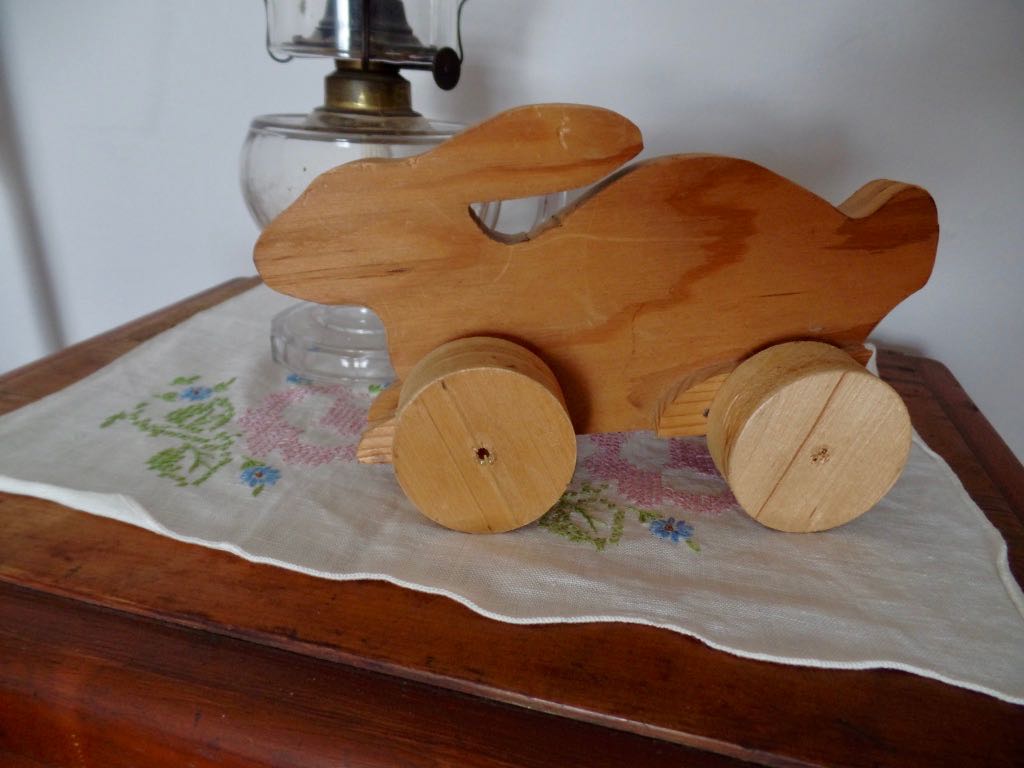 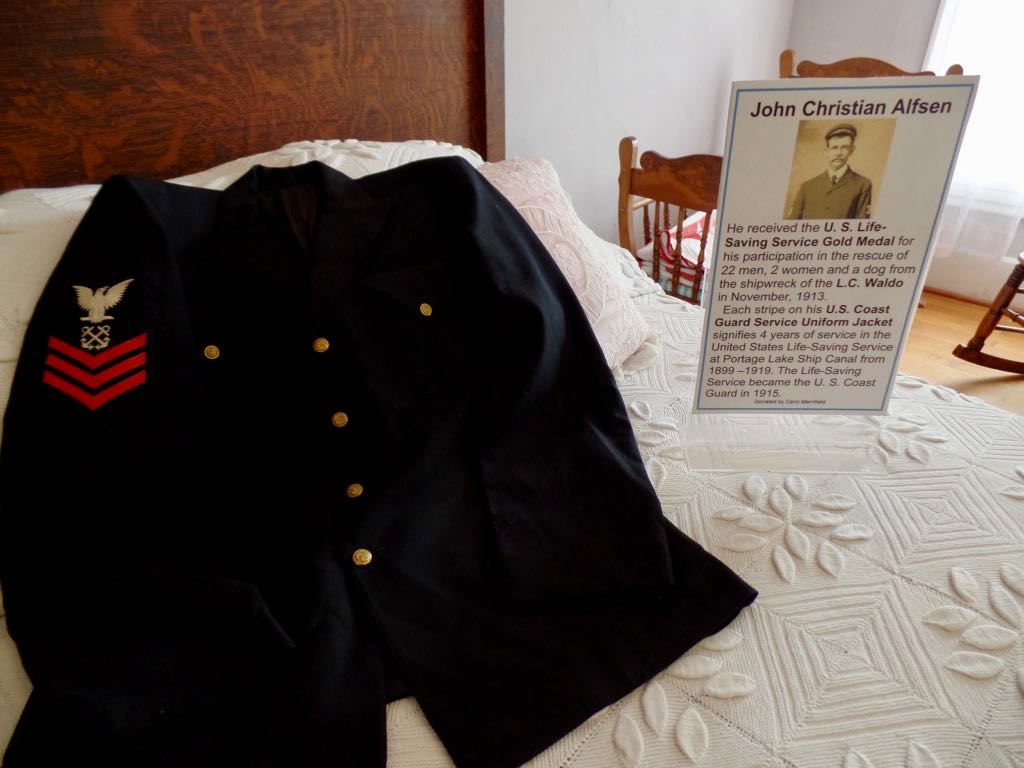 In the master bedroom things are a bit more formal, and we have here the jacket and a memorial to one of the lighthouse keepers. I don't know but it's plausible that this rescue of the L C Waldo might have driven the choice of restoration date for the museum. 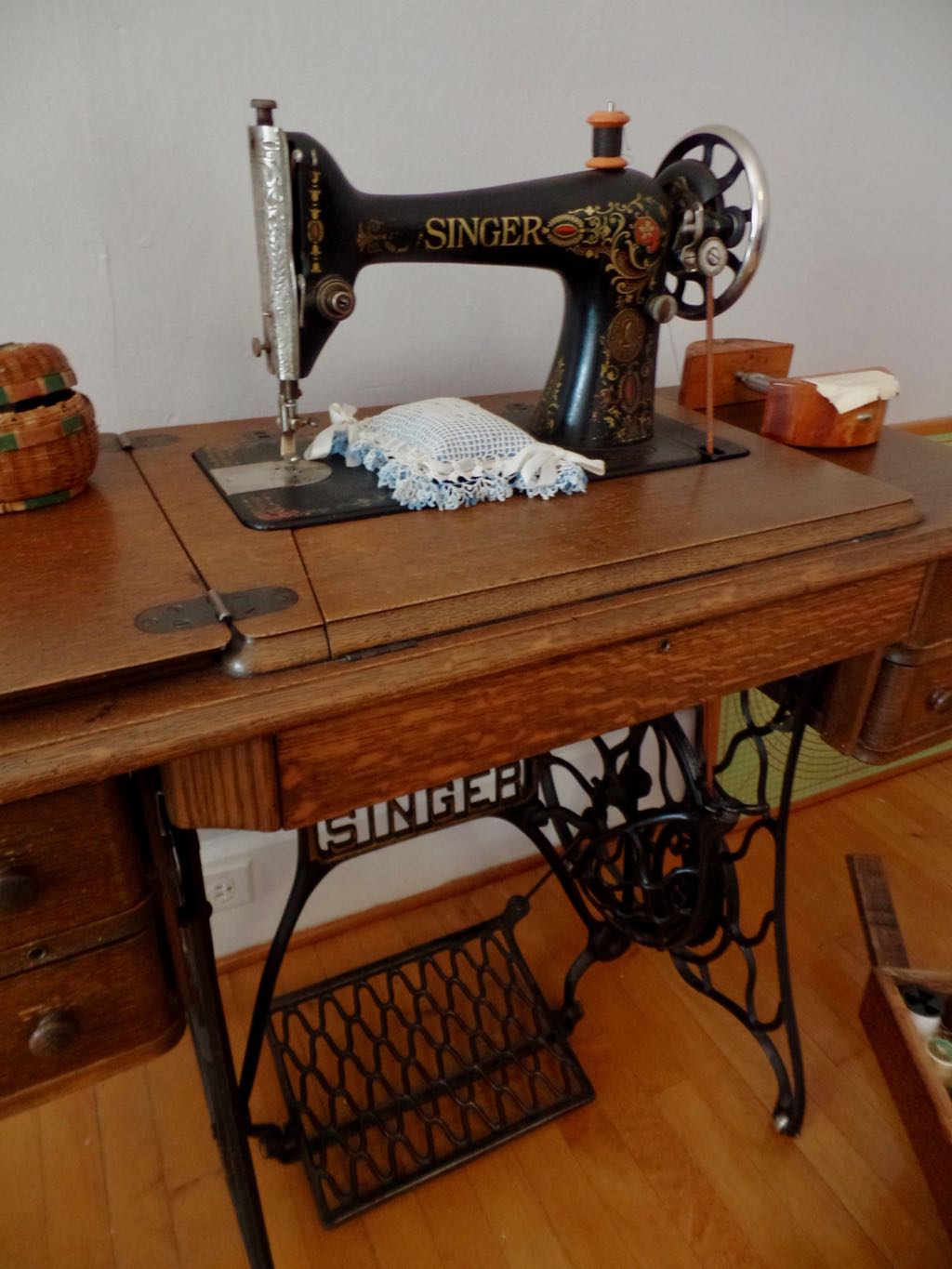 Good old-fashioned sewing machine on display in the lighthouse. 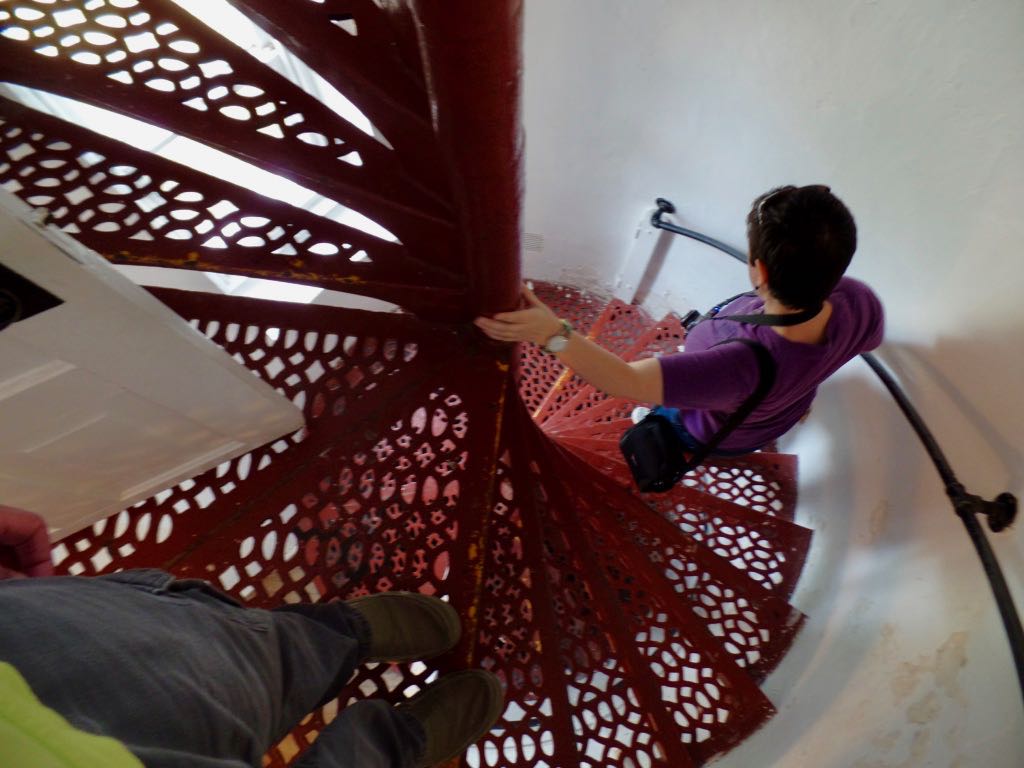 And we walk back to the first floor of the museum while also posing for our album cover. 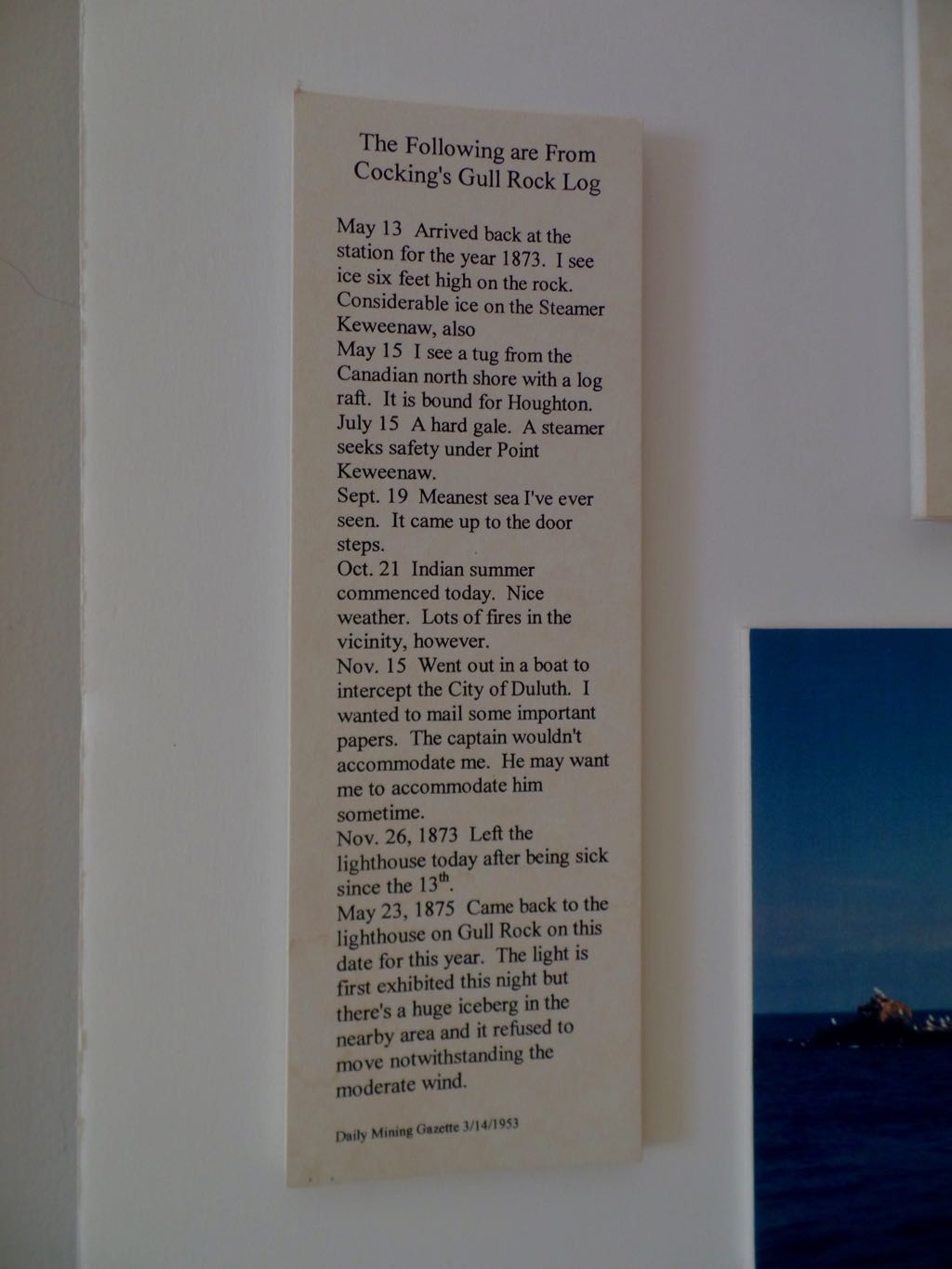 On the 15th of November, 1873, the lighthouse keeper got a bit snarky, although I don't blame him. 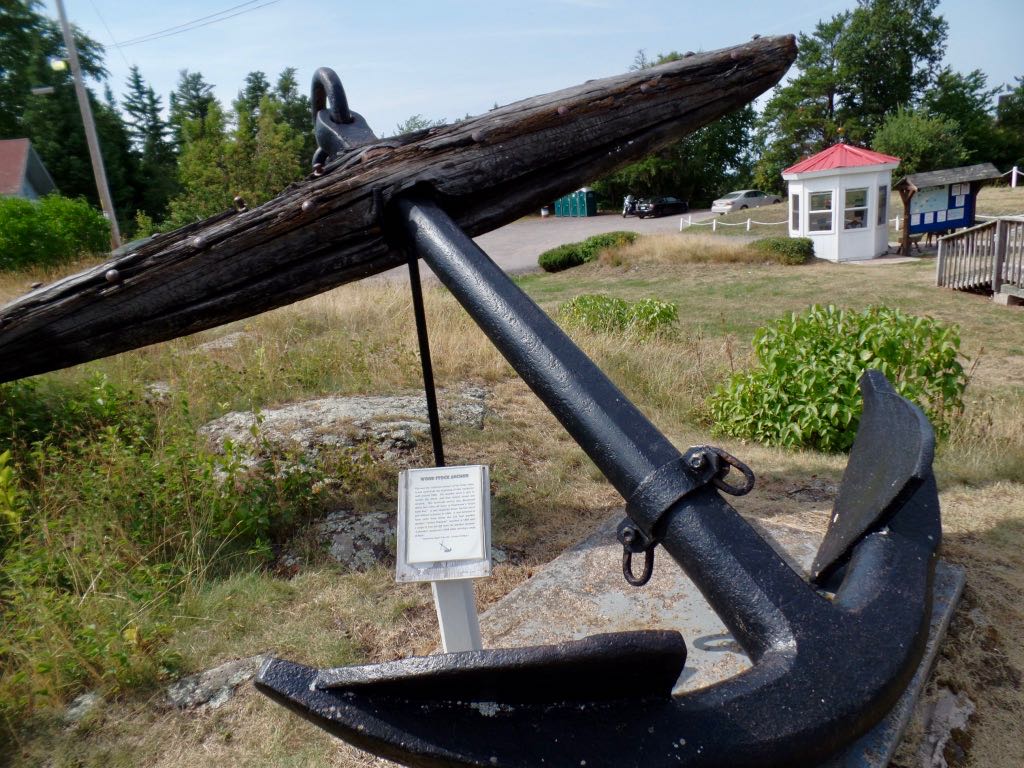 On display outside, a wood stock anchor of a type commonly used in the Great Lakes until around 1890. This one was discovered and raised in 1968; it's thought to have come from either the James Pickands (wrecked 1894, carrying iron ore) or the Colorado (wrecked 1898, carrying flour). 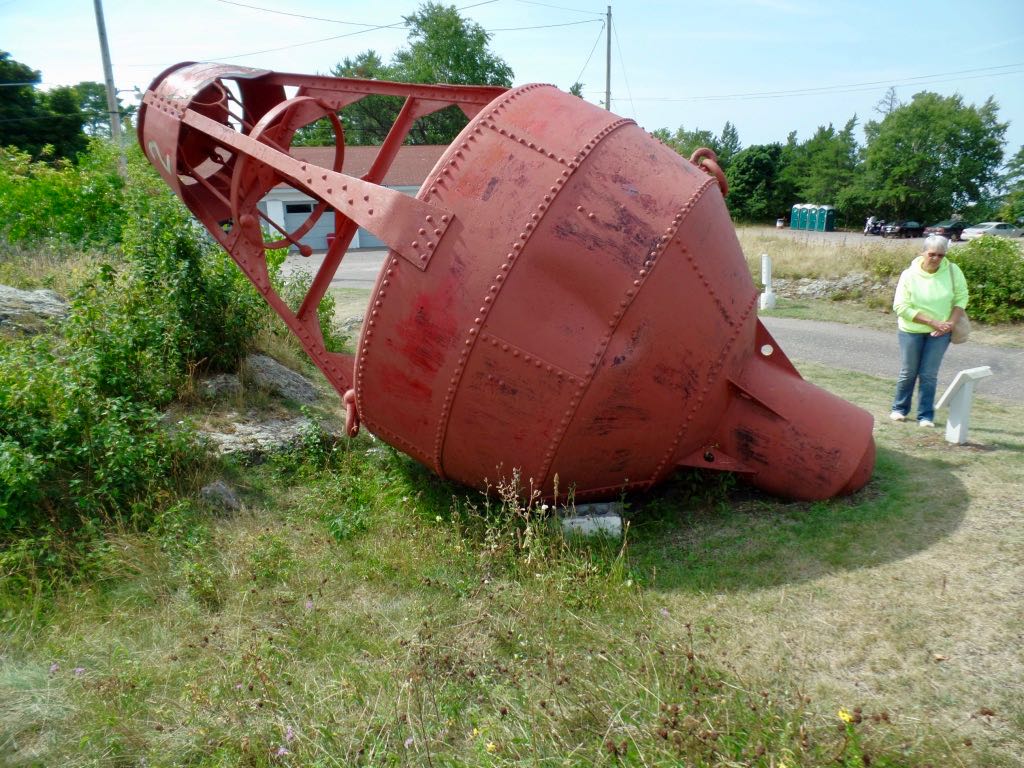 And a harbor buoy of the kind they use now in place of a working lighthouse. 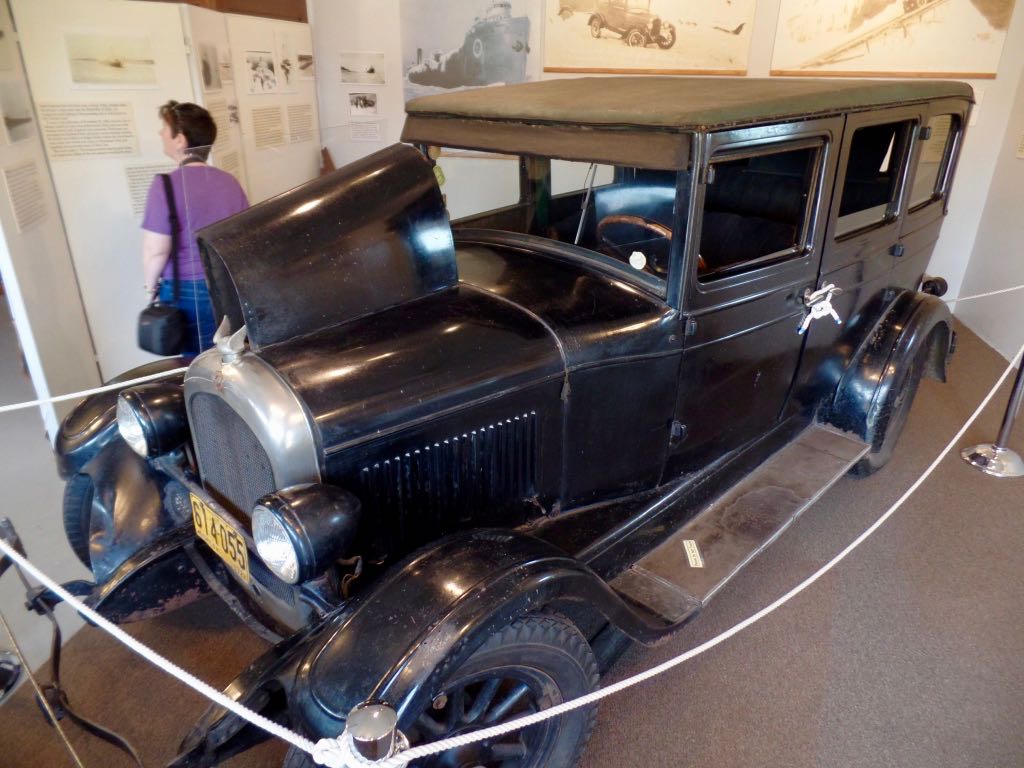 So here's a Chrysler with a story: in 1926 the ship City of Bangor, carrying a load of 248 cars ran aground in winter storms. The crew made it to shore and walked to town, although it wasn't easy and in the storm they walked several miles in the wrong direction before correcting things. 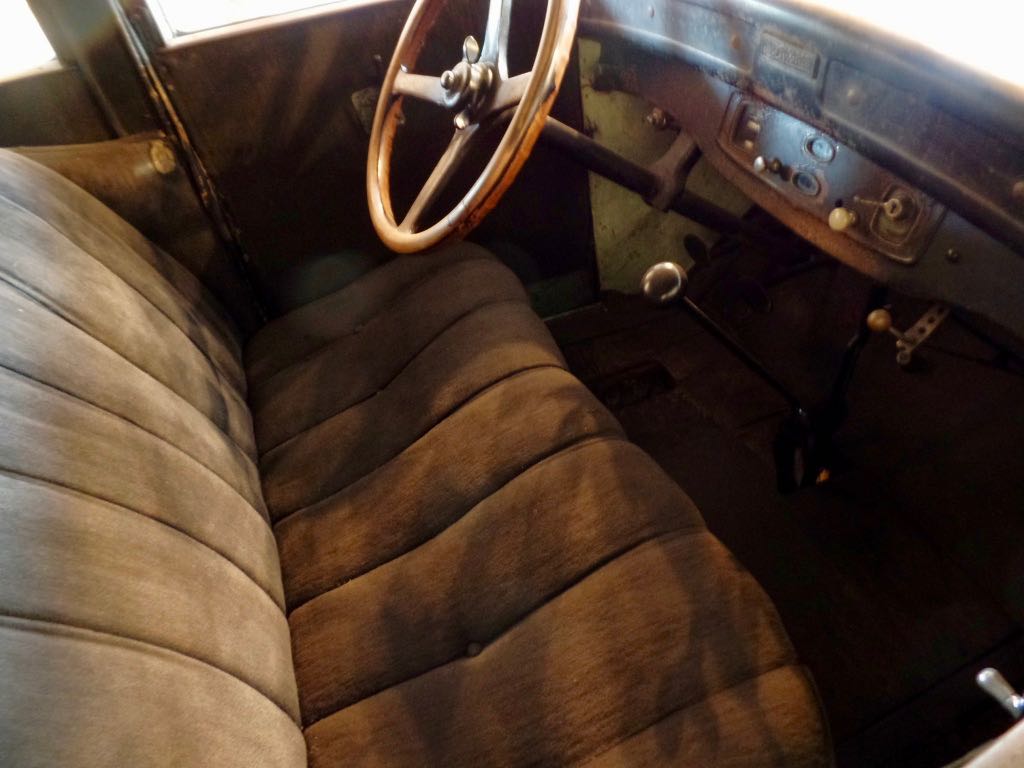 18 of the cars, on deck, fell into the water and washed ashore; the rest were recovered, sent to Detroit (by train), repaired and sold. The cars that washed ashore were also recovered and here's one of them. 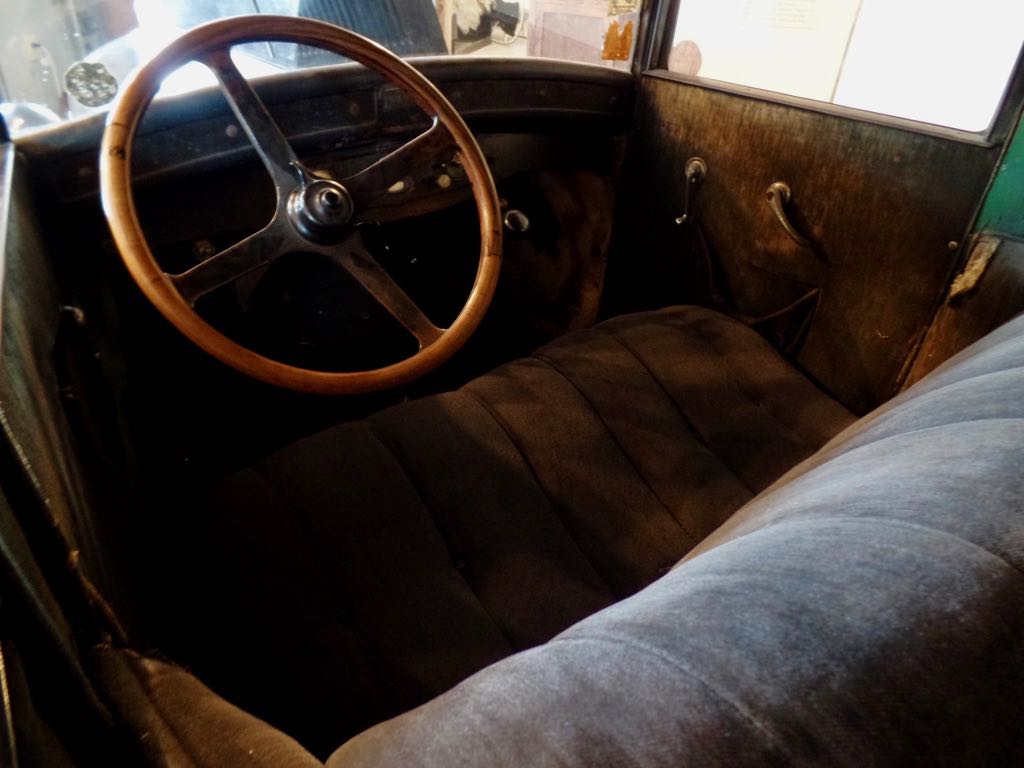 Another view of the interior of the recovered 1926 Chrysler. 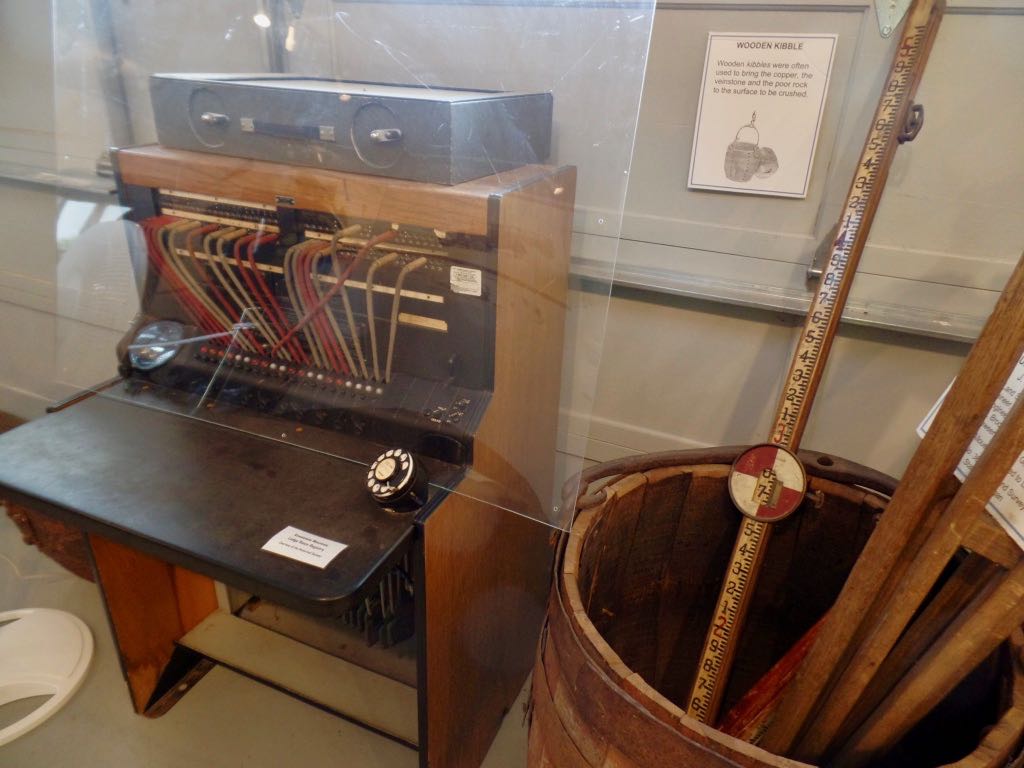 Telephone switchboard from the Keweenaw Mountain Lodge; the lighthouse is, in part, a good place for the Keweenaw Historical Society to keep stuff of local interest.

Trivia: The first crowned monarch to speak on a Movietone newsreel was Spain's King Alfonso XIII, whose extemporaneous speech invited Americans to visit his country, ``where there are no speed laws''. Source: The American Newsreel 1911 - 1967, Raymond Fielding.

Currently Reading: The Legion of Super-Heroes Archives, Volume 5, Archive Editor Mike Carlin(?). It's the one with the infamous Can Nothing Stop Computo?! story. Also a lot of stories that interrupt what slender narrative logic there was to fit in a scene that technically meets the requirements of showing whatever Mad Libs product gave them the front cover, and then diverts back into a shocking lot of head games and casual cruelty that occasionally kind of has a point? Like, in one story, they have to expel a member for killing, even though it was in self-defense, when they show a plausible way that he could have stopped the villain without shooting him dead if he had thought of it. And then they sink my respect by saying, hey, don't worry, you can still join the rejects in the League of Substitute Heroes. And yeah, the Substitute Heroes are correctly described as rejects but still, they're people who have made a go out of, like, having the power to change the colors of things. Also, you let in both a traitor from a galaxy at the just-discovered end of space that's invading Earth in one hour and Bouncing Boy.