They start to ring

Anthrocon 2020 is cancelled. That's sad news, although in an abstract way for us, as we didn't expect to go. It does take the pressure off from my friend (not

chefmongoose) who keeps asking if I'll attend this year. But Anthrocon is held in the same convention center as Pinburgh/ReplayFX. This year it was scheduled to be one week earlier. Pinburgh has been annoyingly stubborn about not admitting the possibility that perhaps things might not come off precisely as scheduled this year, or even acknowledging that they're thinking about the chance they'll have to postpone or cancel.

But it's coming, surely within a week. I wouldn't be surprised if there were an announcement between my writing these words (about 7:30 pm Eastern) and their posting. It's so strange to be sitting up and just waiting for the sad news I know to be coming.

I wonder if our tickets for 2020 will roll over to next year, or if they'll refund everybody's and we have to enter the time lottery for 2021 again. Either way is just, and either way is unjust.

Our second full day in the Keweenaw we went, first, to the Quincy Mine. It's what it says on the label: a once-working copper mine that's become a National Historical Park and sometimes a teaching facility for Northern Michigan University, which used to have a mining program. 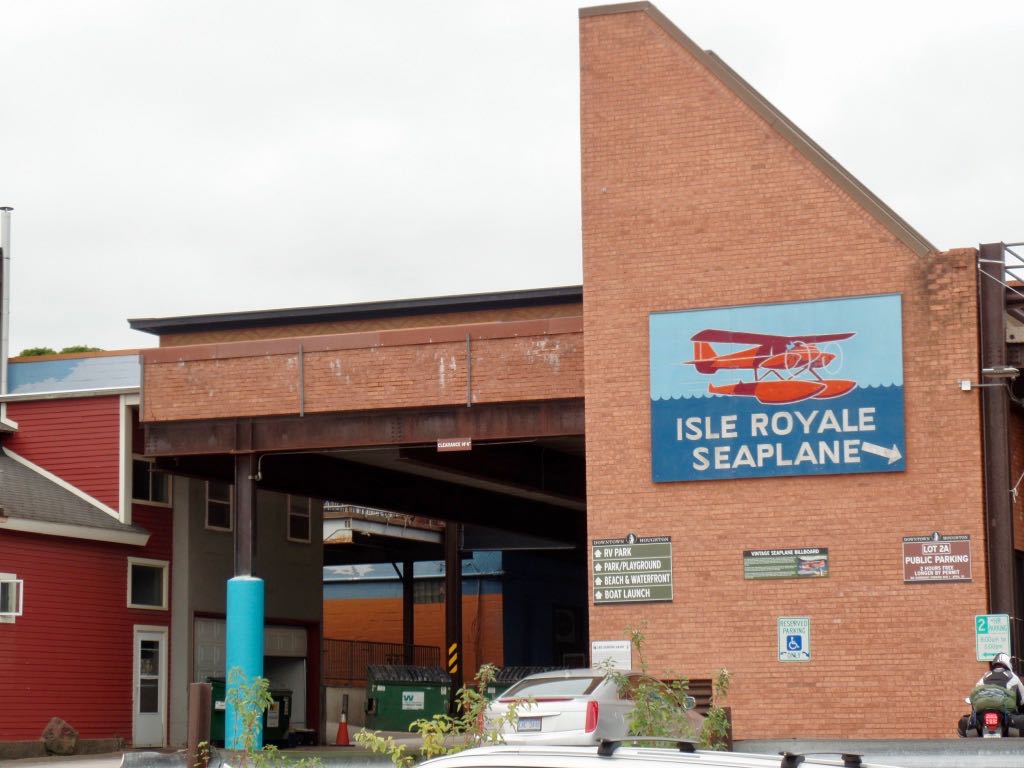 First, though, we went into Houghton, the big city in the area, where as you can see they were ready for Animal Crossing: New Horizons years before anyone else was. Houghton has a population of about eight thousand people, and it's the fifth-largest city in the upper peninsula. (The metro area is closer to 40,000 people.) 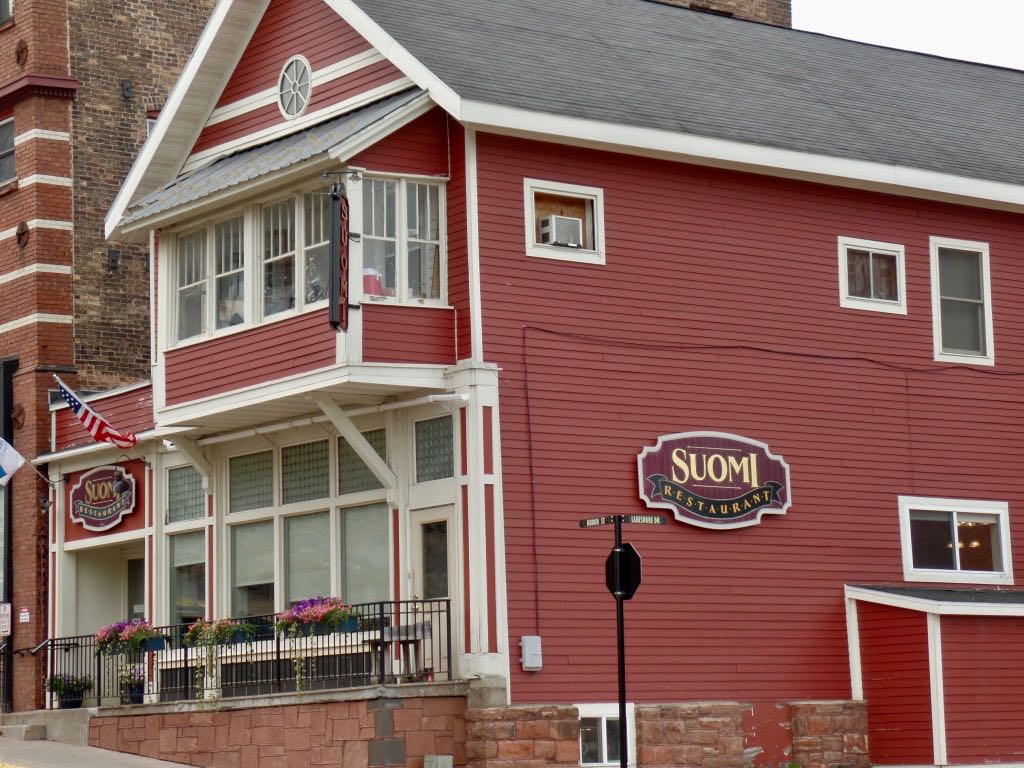 Suomi, the Finnish restaurant (there's a lot of Scandinavians who moved to the upper peninsula) where we went for lunch, for pannukakku, which I know what you're thinking but is not just a pancake all over again. 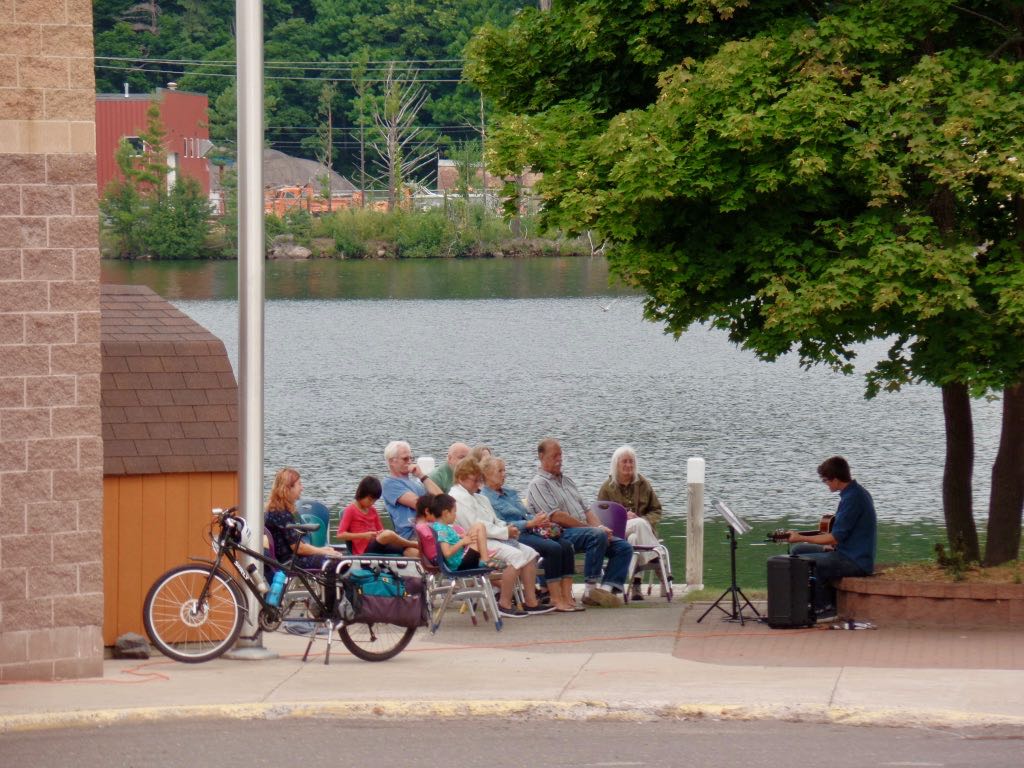 Some folks gathered in a park and listening to the guy with his guitar. 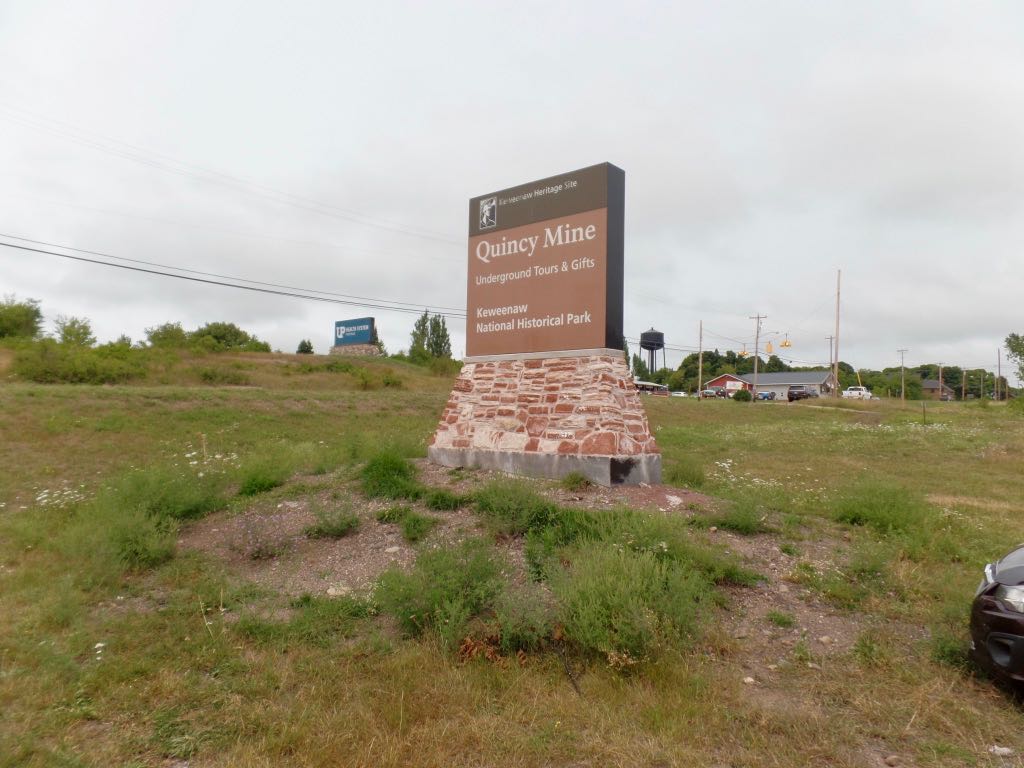 Establishing shot of the Quincy Mine entrance; you can just see my car off to the right. We'd driven past it a couple times already, since it's on US Route 41 like it seems everything in the Keweenaw Peninsula is. 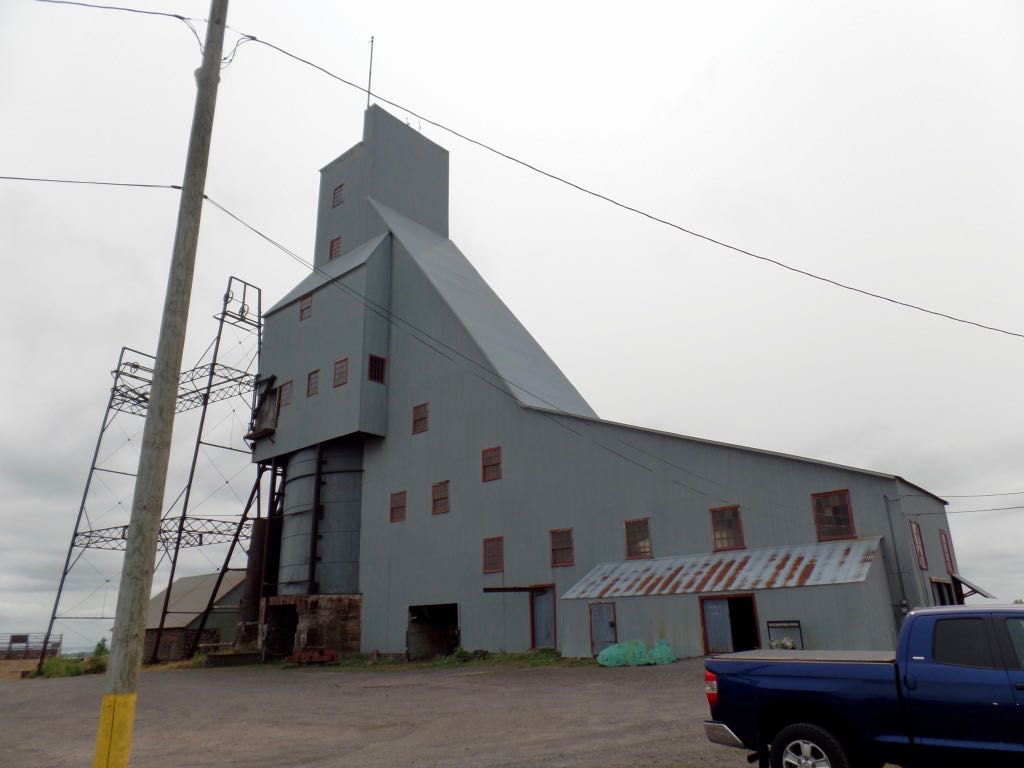 The Number Two Rockhouse, the roughly eight(?)-storey building into which ore would be heaped and sorted and put into place. 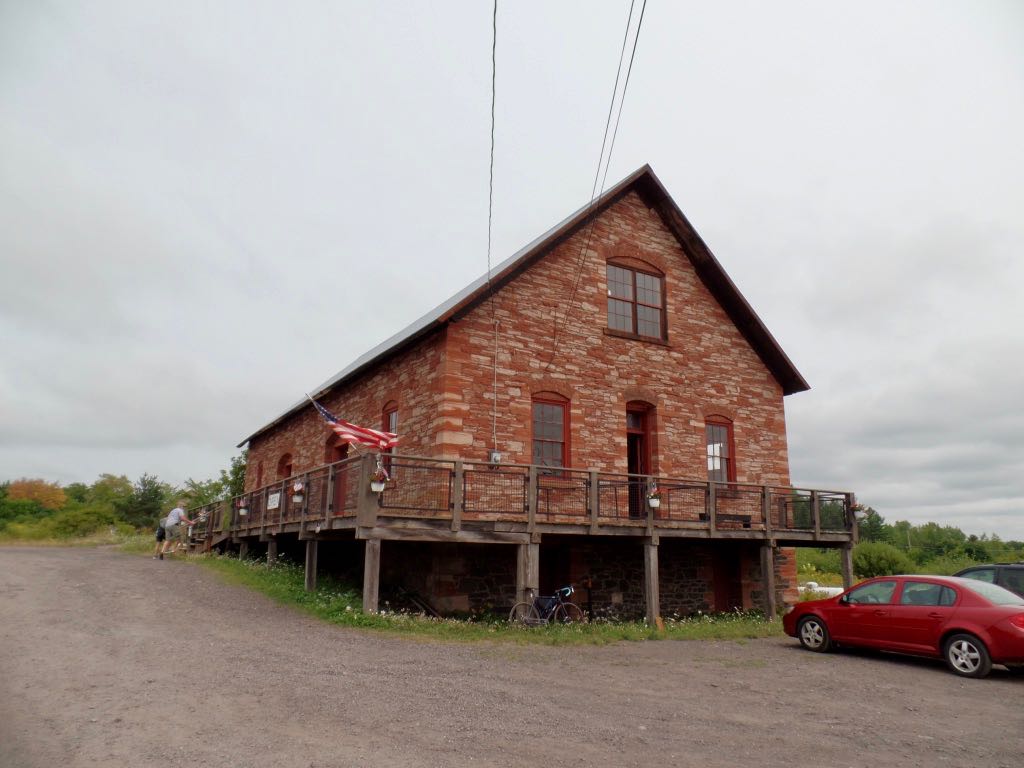 The welcome center and gift shop and place where you buy tickets. I don't know its original function and wouldn't be surprised if it had been management offices. 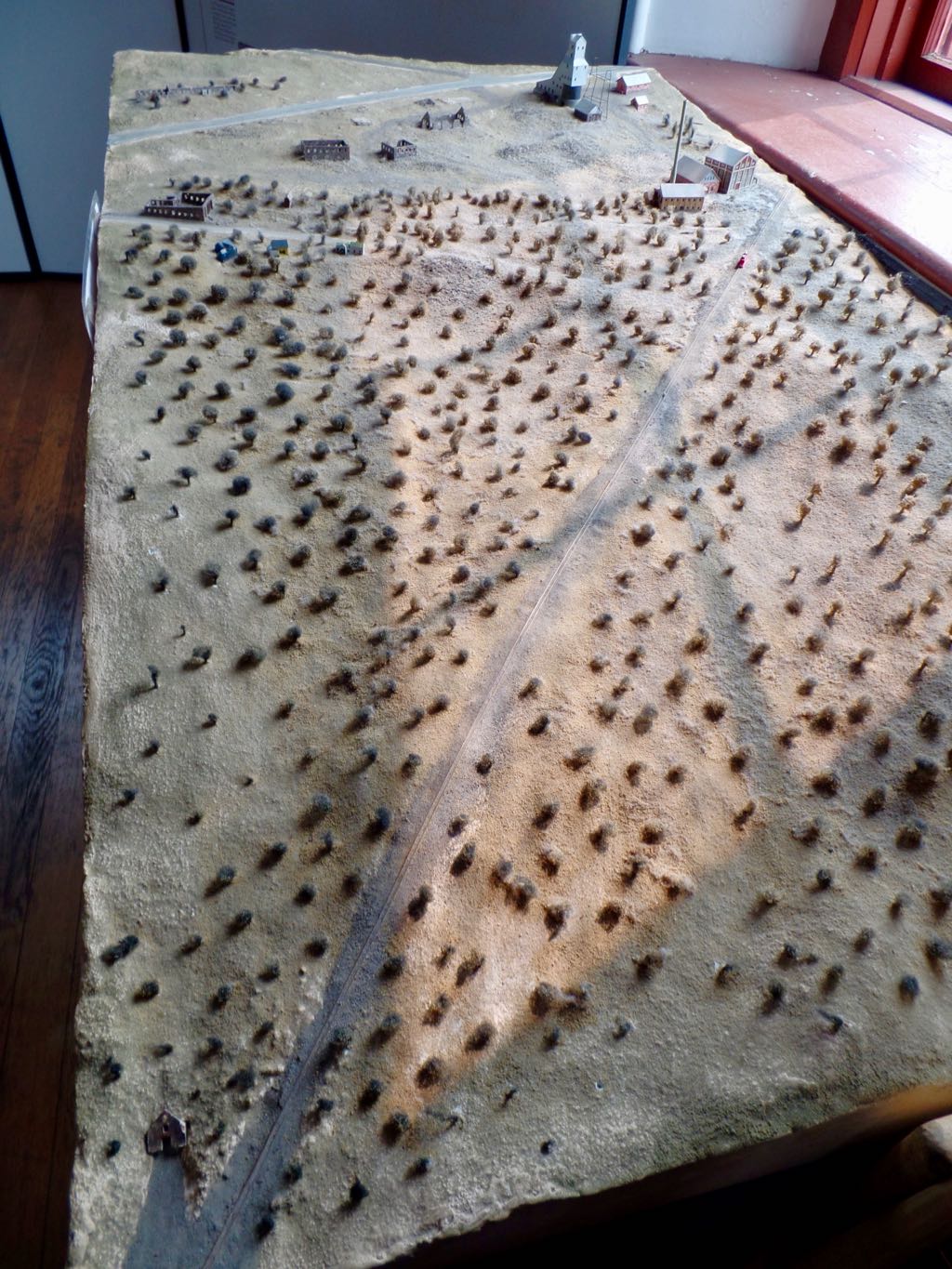 Model within the welcome center showing the layout of the mine. US 41 is the road running along the distant end of the table, and you can see the Rockhouse in the upper right corner. The straight line running diagonally through the sunbeam is the railway down to the adit, the horizontal entrance into the mine that we would use. 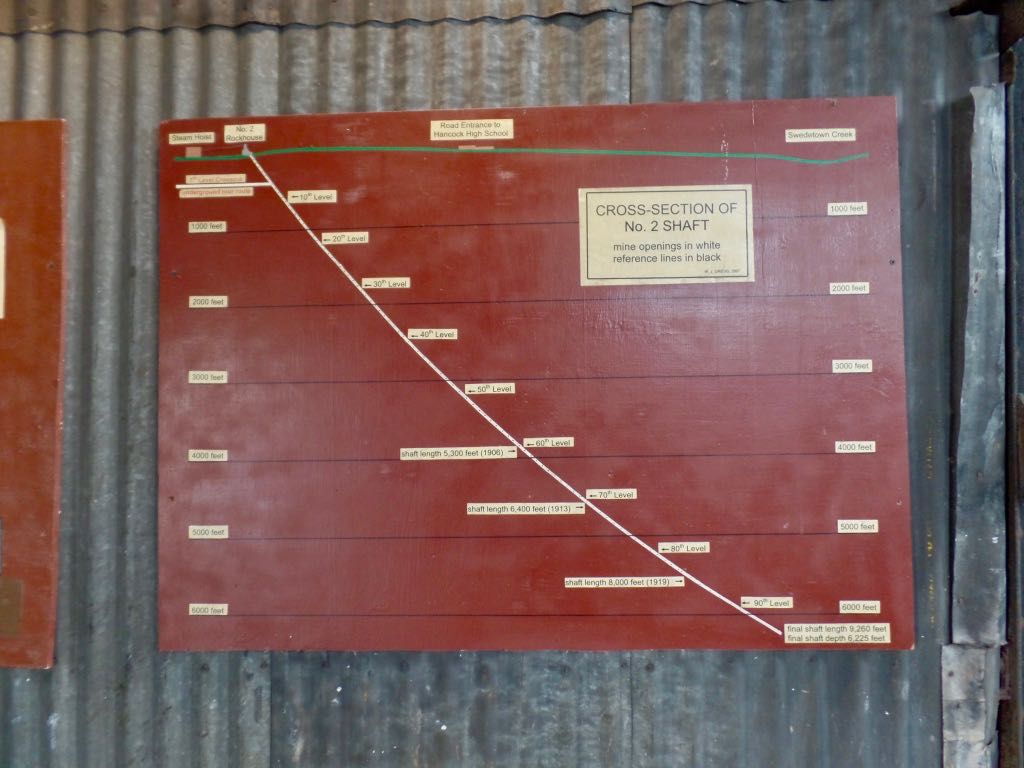 A cross section, inside the rockhouse, showing the Number Two mining shaft, which you can see goes down (the sign estimates) 6,225 feet vertically and 9,260 feet in all. We would go only down to that horizontal mark near the top, less than a thousand feet under the surface. 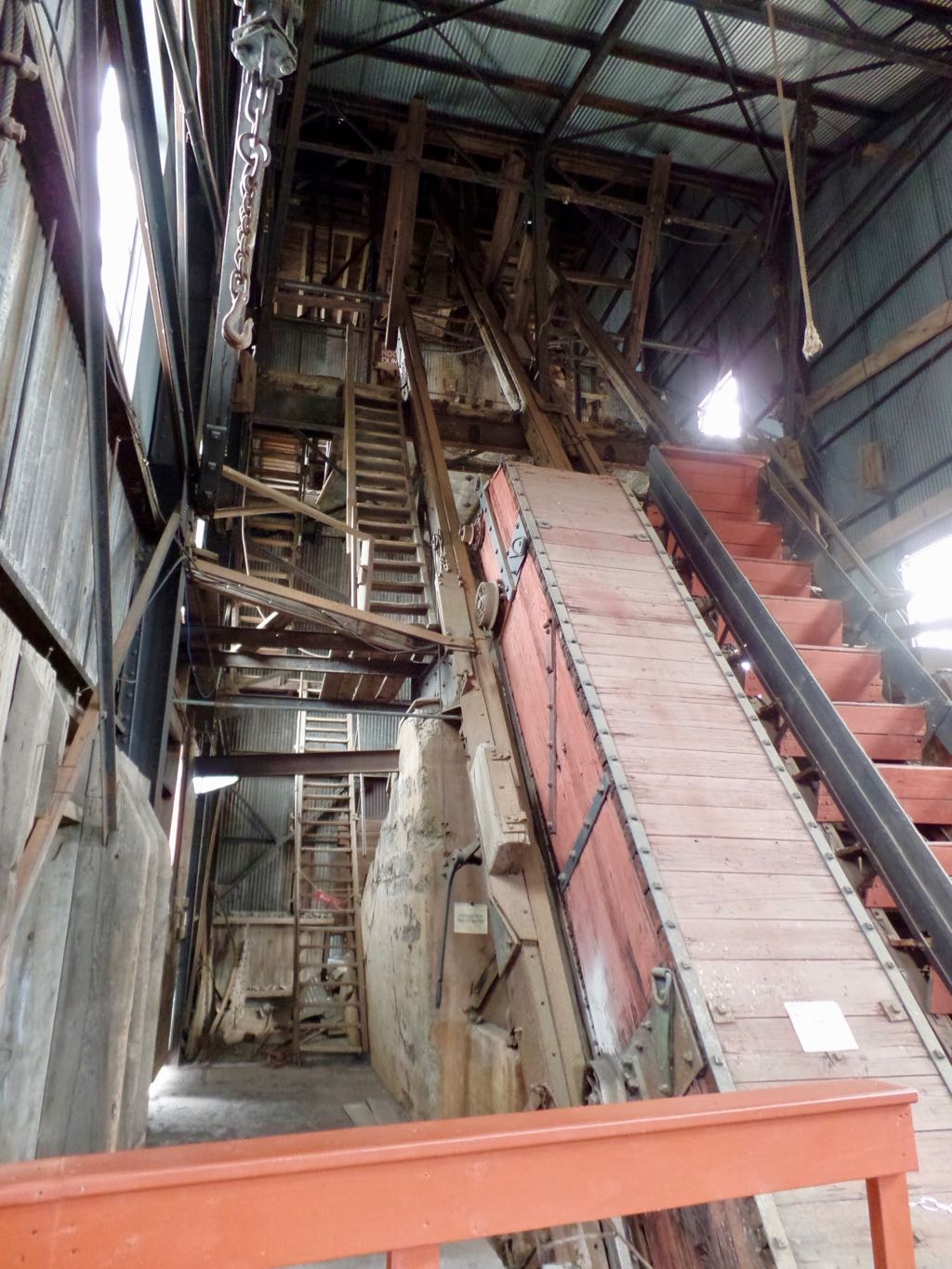 Elevator mechanisms that would bring loads of ore up to be sorted and crew down and up to work and be relieved. 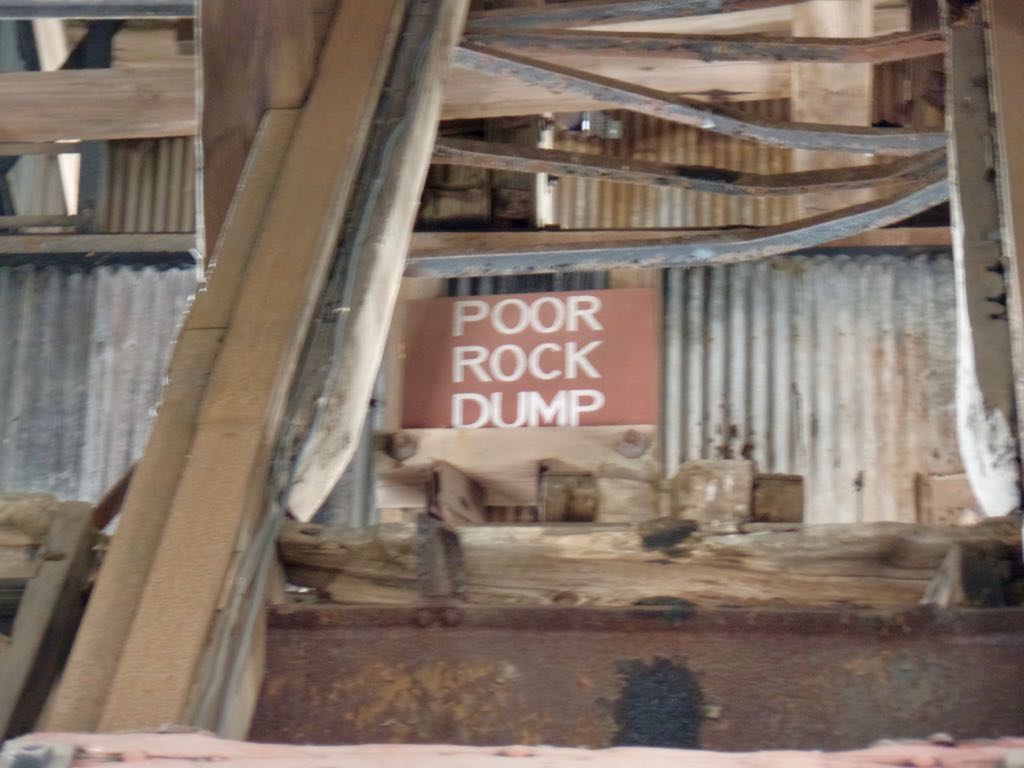 Aw, the rock dump is trying its best! 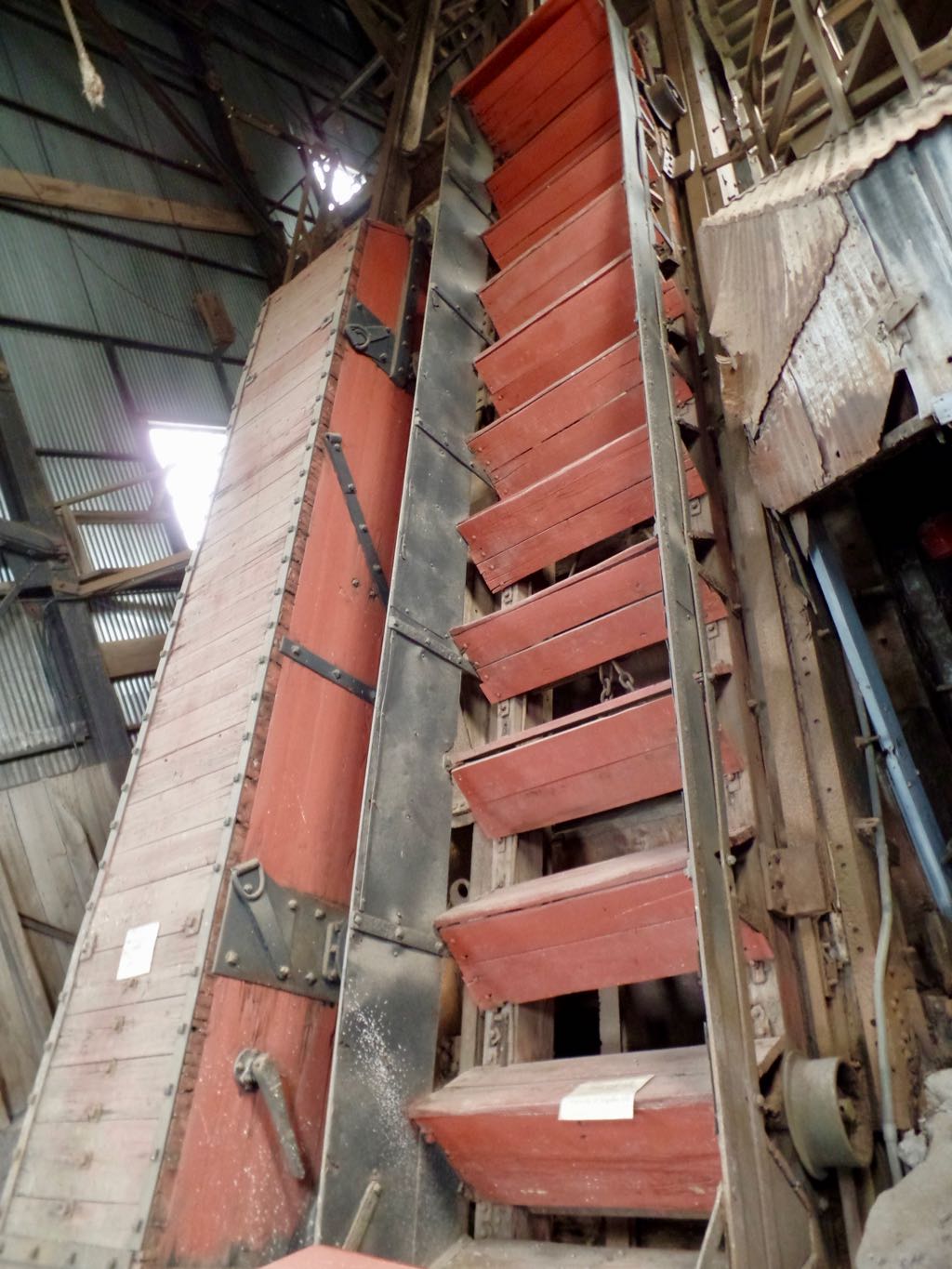 The elevator on right would carry people, who'd sit on each step, their feet in back of the people ahead of them. This looks like an incredible way to get yourself killed just by sitting but apparently it didn't kill enough people so as to be uneconomical. 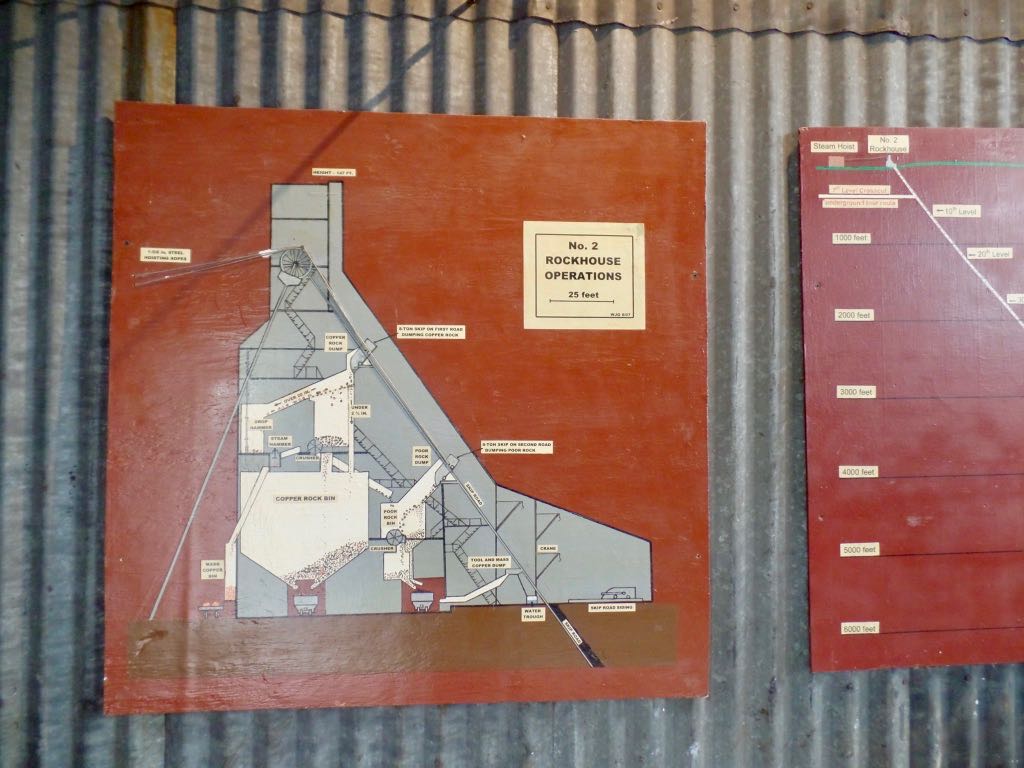 Diagram of the rockhouse operations, showing the way that ore would get sorted; in the middle-center you can see the Poor Rock Bin in its working location. Also you can see the link between this house and the mine. 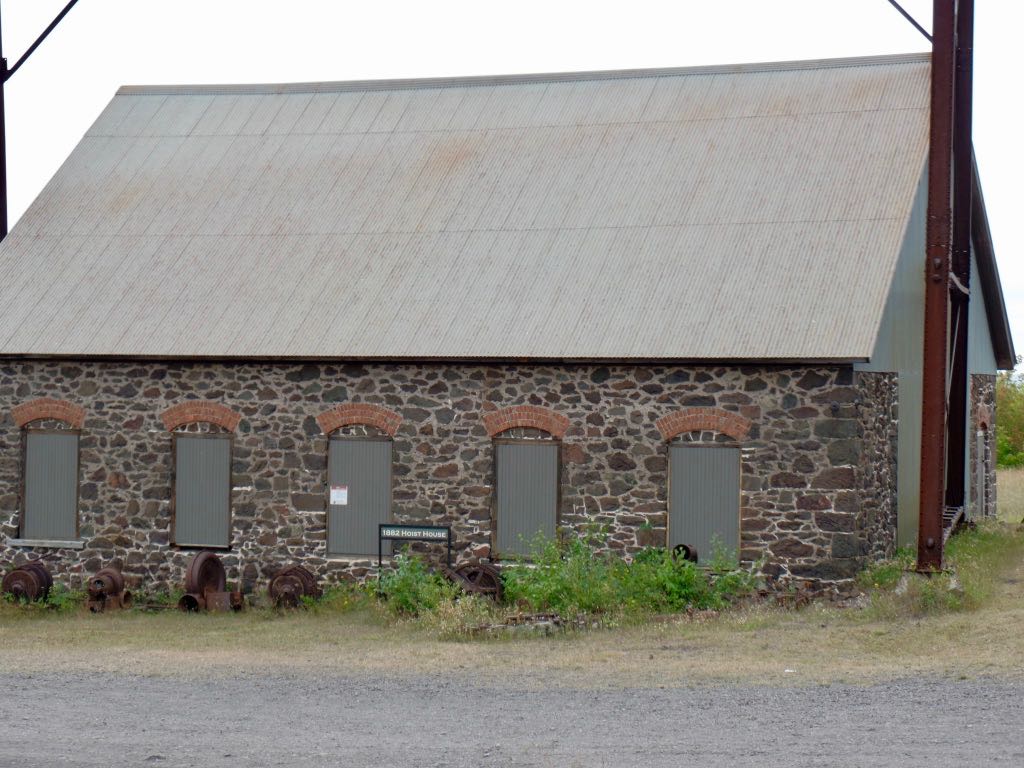 The 1882 Hoist House, which held the machinery for an earlier hoisting mechanism and, I suppose, the Number 1 shaft. 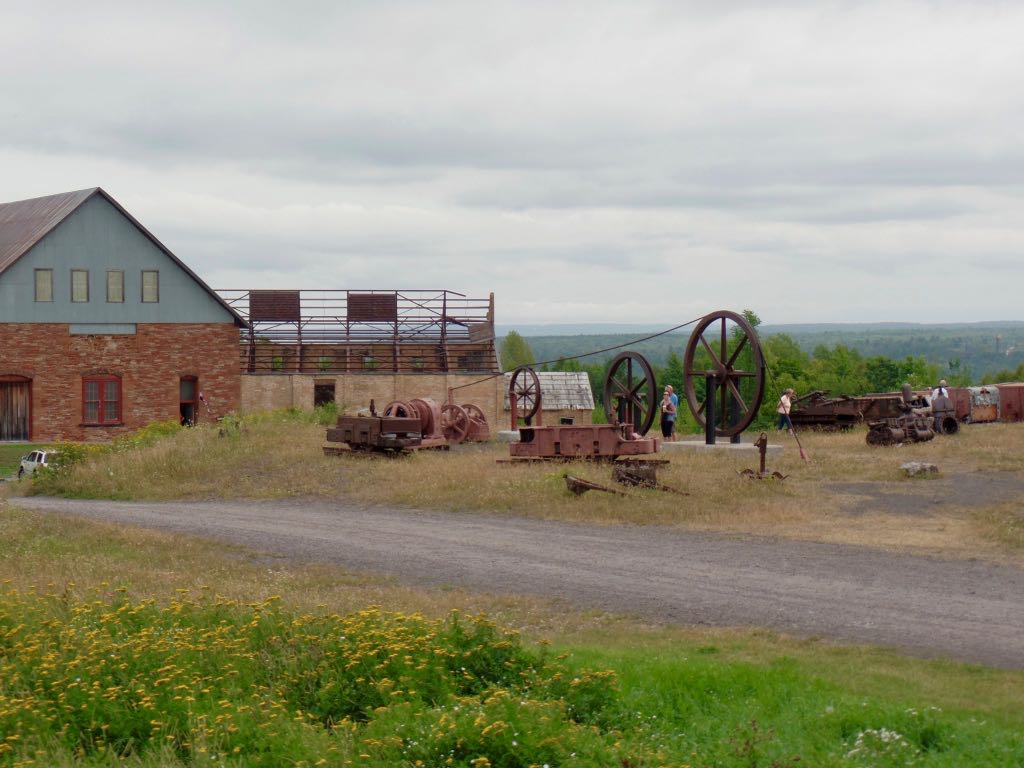 Do you see the letterbox in this picture? No? Us neither, but as best we could tell from the clues there should have been one somewhere around here. We couldn't figure what the clues were trying to get at, exactly, unless they wanted us to go into the parts of the building roped off as unsafe. They can't have meant that. 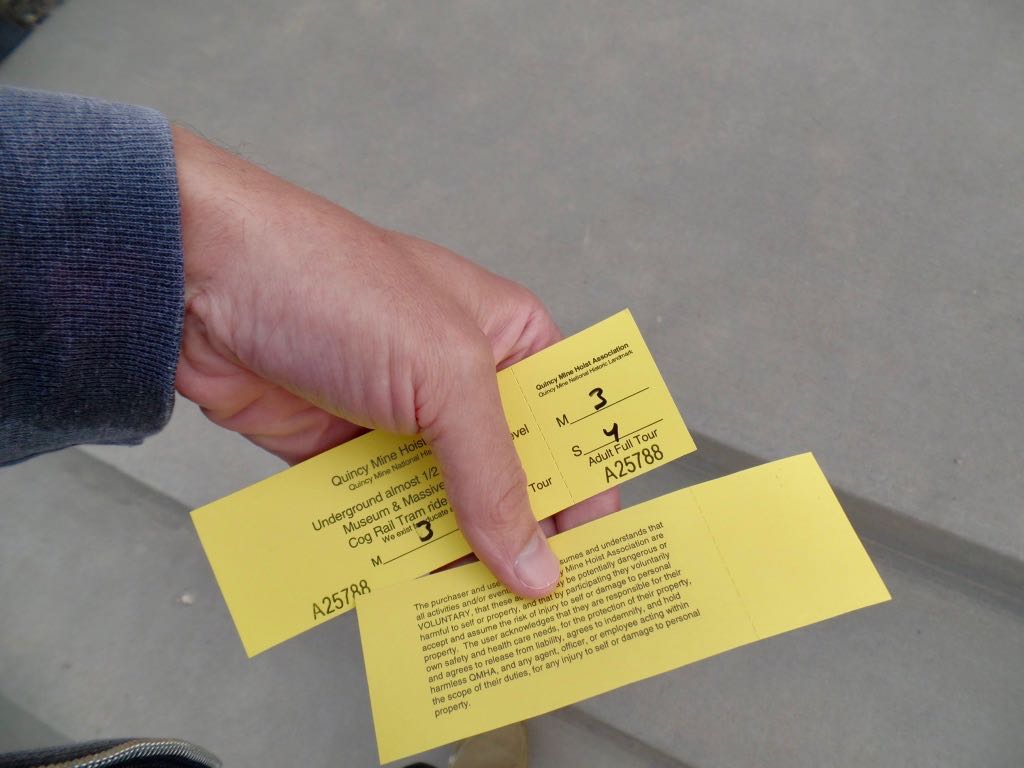 Our tickets! We had reservations to go on the 3:00 mine tour, which left without us, so we got the 3:30 instead. 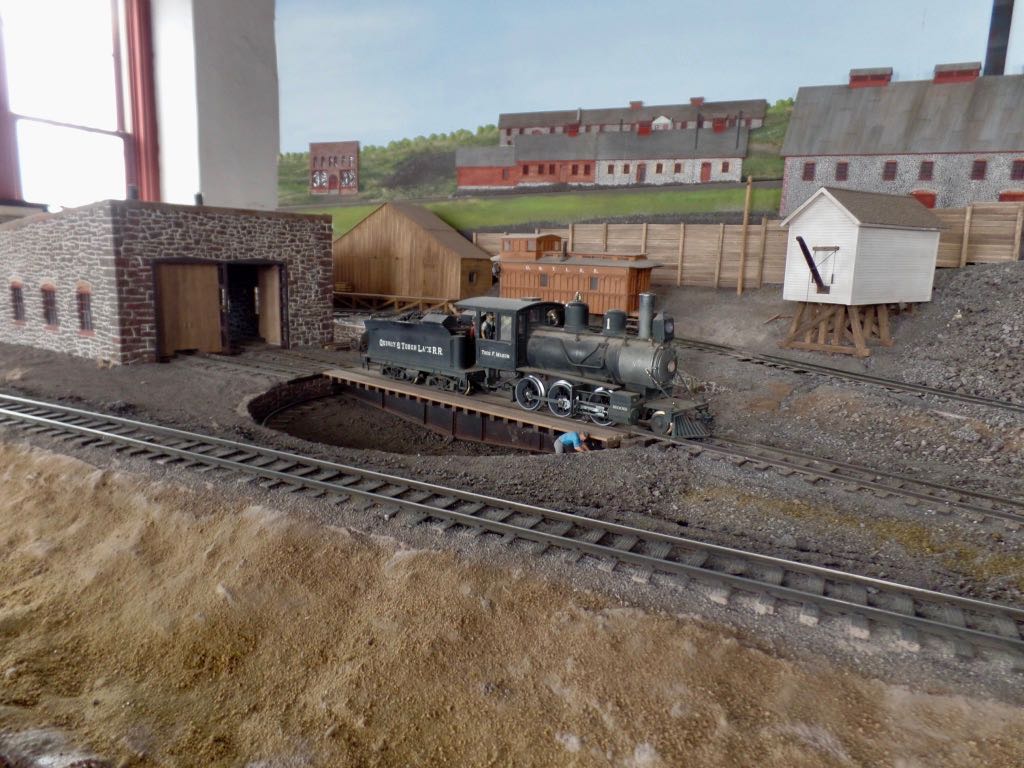 Miniature railroad that's set up inside the final hoist house, and the gathering point for the mine tours.

Trivia: In 1879, the first time the United States Postmaster General prepared such a list, there were 98 recorded post offices robbed in a year. Source: The American Mail: Enlarger of the Common Life, Wayne E Fuller.