Yeah, so a bunch of gun-toting yahoos stormed the Michigan legislature yesterday, hoping to terrorize the state legislature into letting them go to TGI Friday's NOW NOW NOW. It's embarrassing, certainly, and pathetic. Also, it hit the local news badly enough to worry my father, who called to ask if we were all right.

Our house is near the state capitol, yes, in reasonable walking range. I haven't gone down there and back for one of my daily walks, as it's a bit far to go without a stopping point. But that's still several miles, and while you could get to our house from the capitol making only one turn, there's a lot of streets that an angry mob would have to go down before they'd find us. So we're reasonably safe from the plague mobs. Still. Sheesh.

On to happier thoughts, he said with more than usual sarcasm. After the mine we went to Calumet, the small town nearby. If you have ever heard of the town, it is for one thing, photographed below. 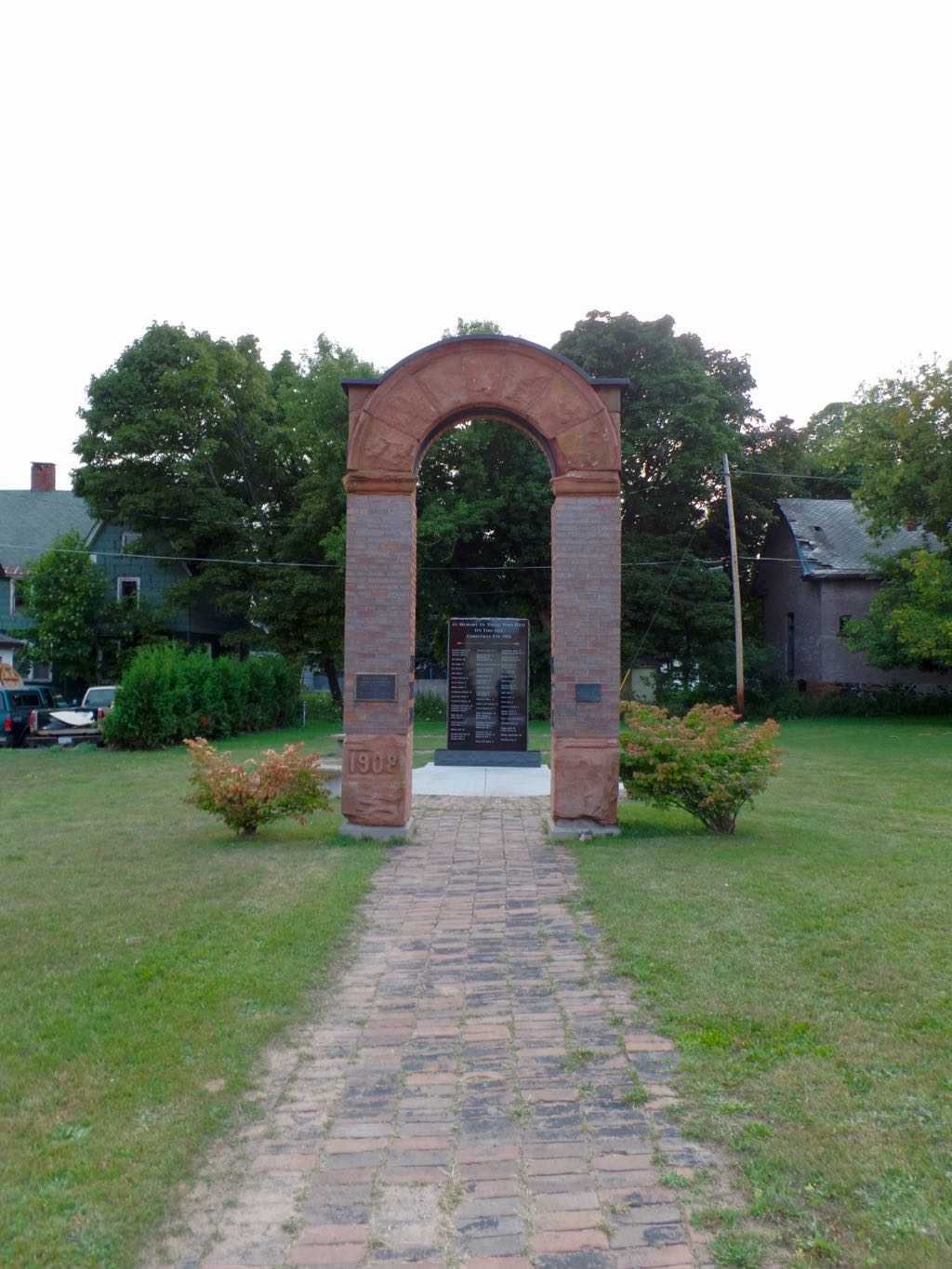 What remains of the Italian Hall. On Christmas Eve, 1913, the Italian Hall hosted a party for strikers and their family. Someone at the door called out, falsely, ``Fire'', starting a panic. 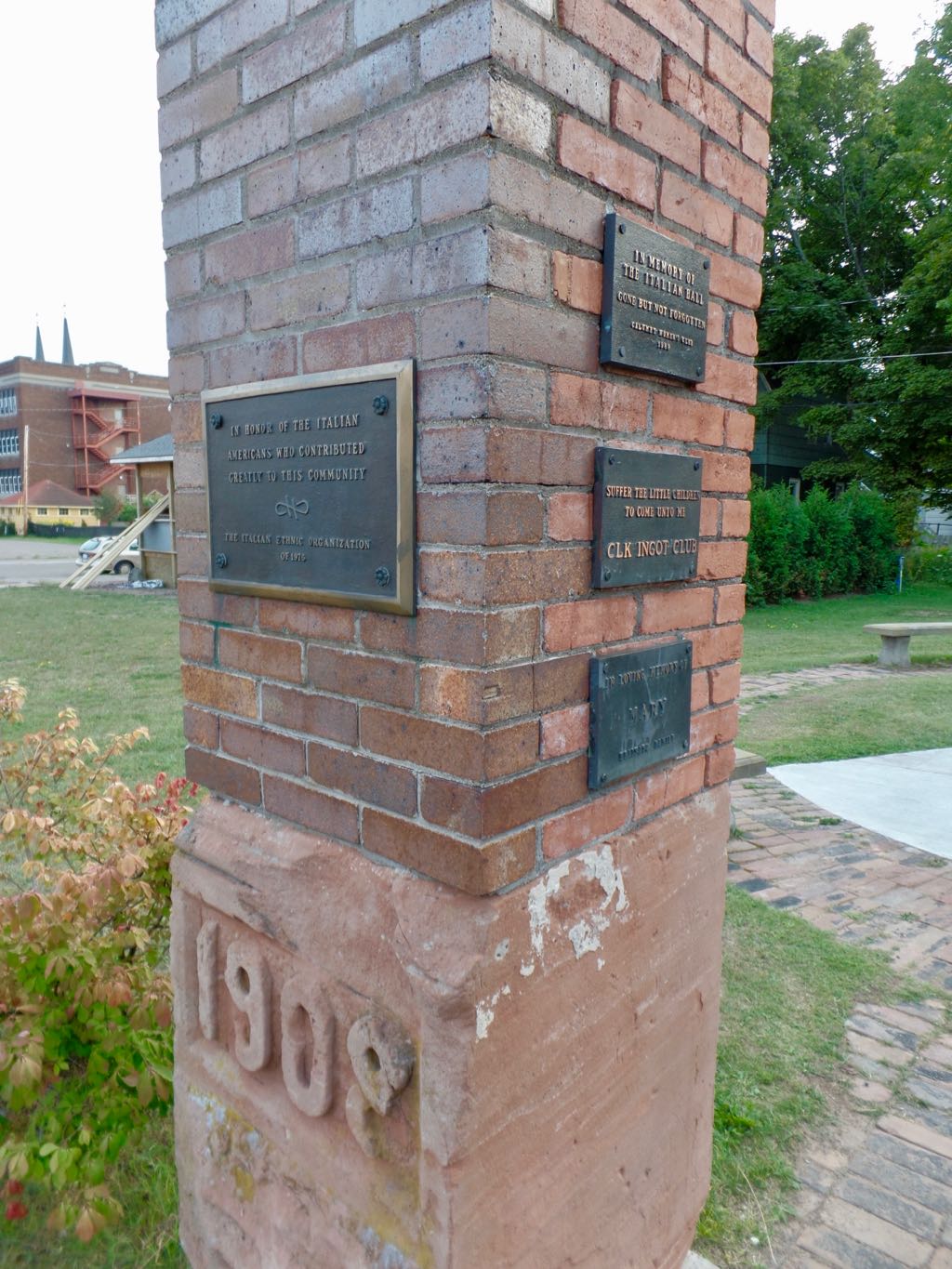 At least 73 people died. At least 59 of them were children. 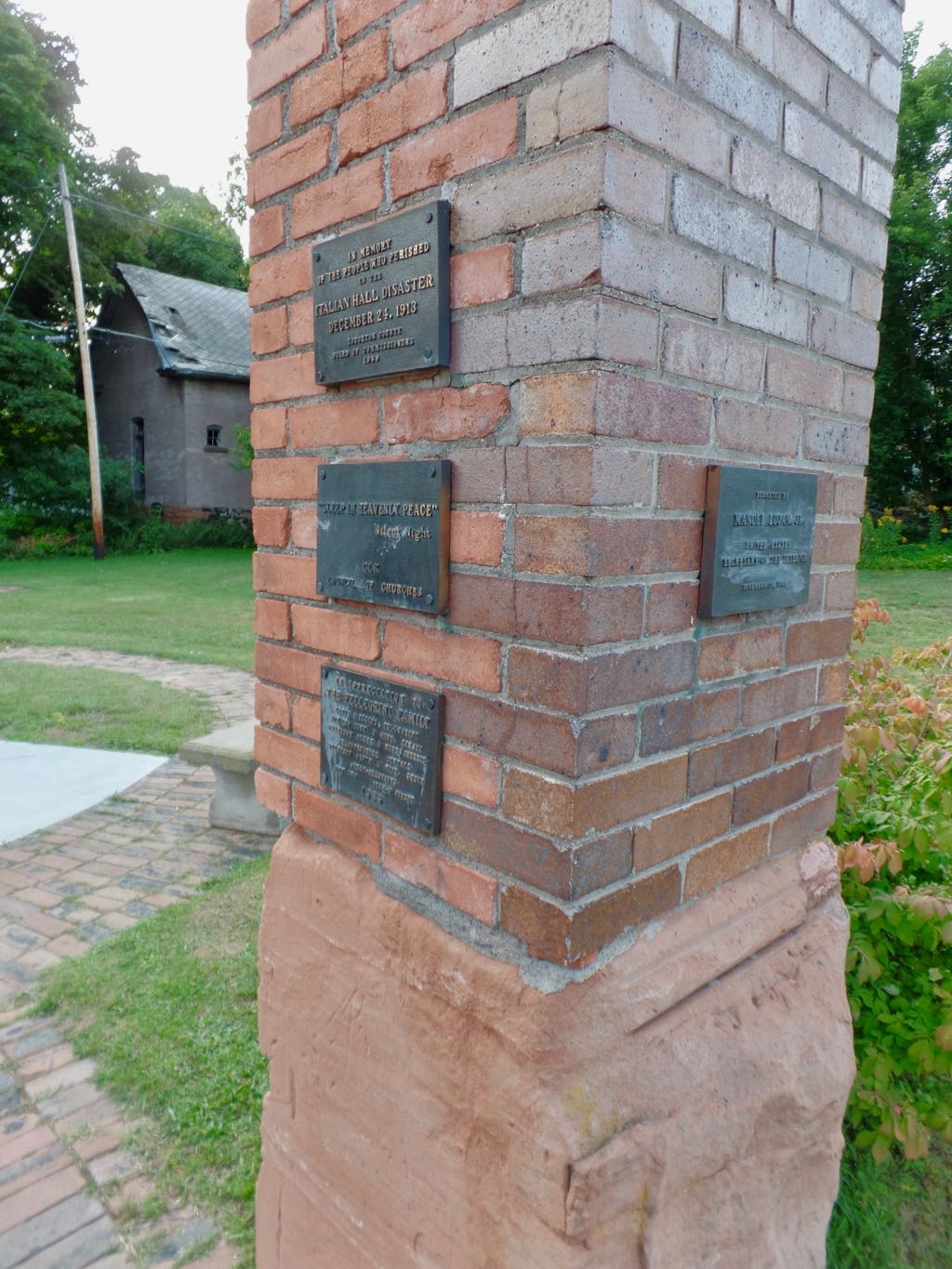 The hall remained in place until the 1980s, when it was finally torn down. The archway of the entrance, which was the far left side of the building, is all that remains. Plaques commemorating the event are attached to what remains of the column. 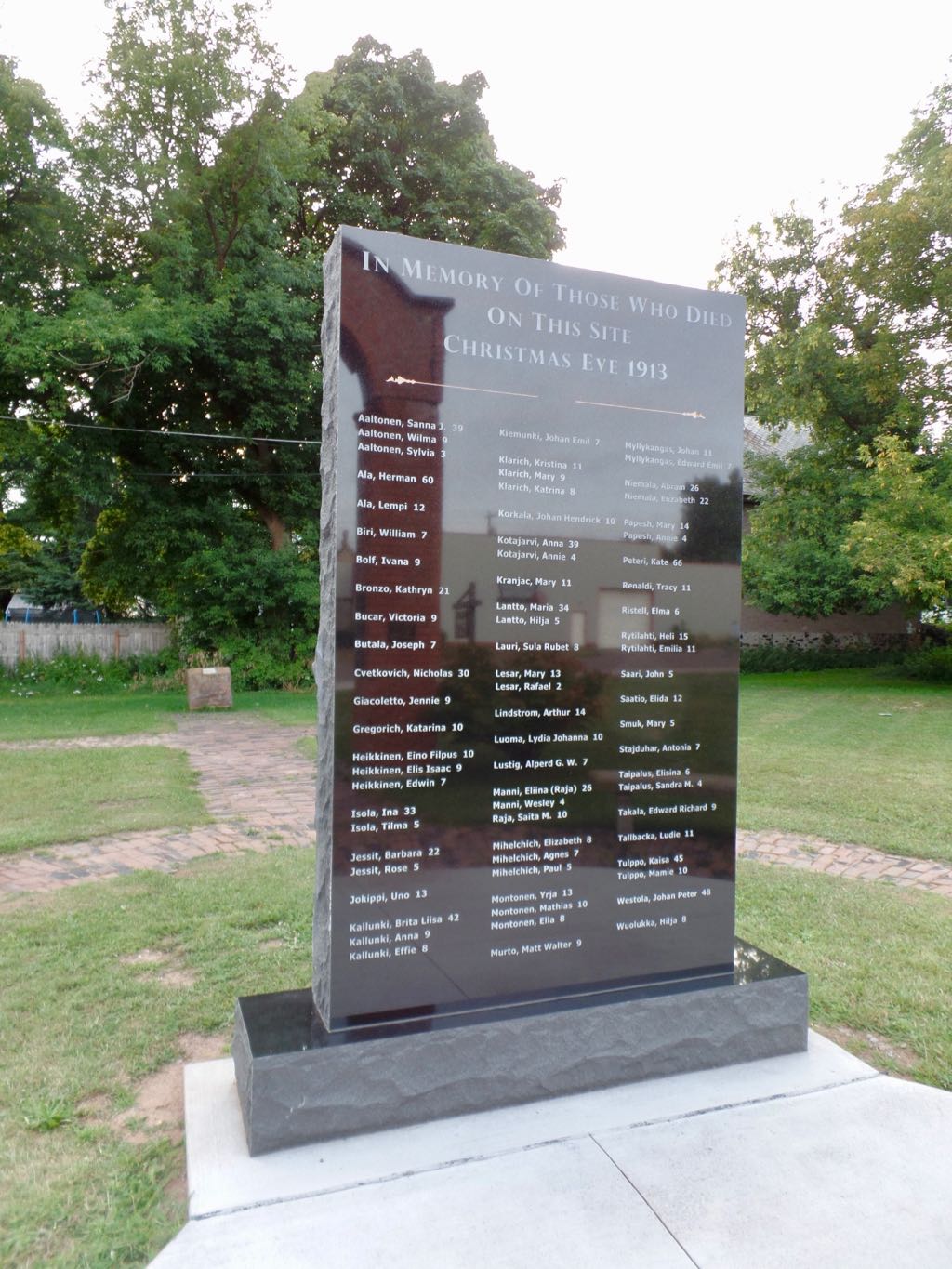 Plaque commemorating the persons known to have died in the panic. There were several families that had several children murdered, and some that ha d at least one parent and child killed. 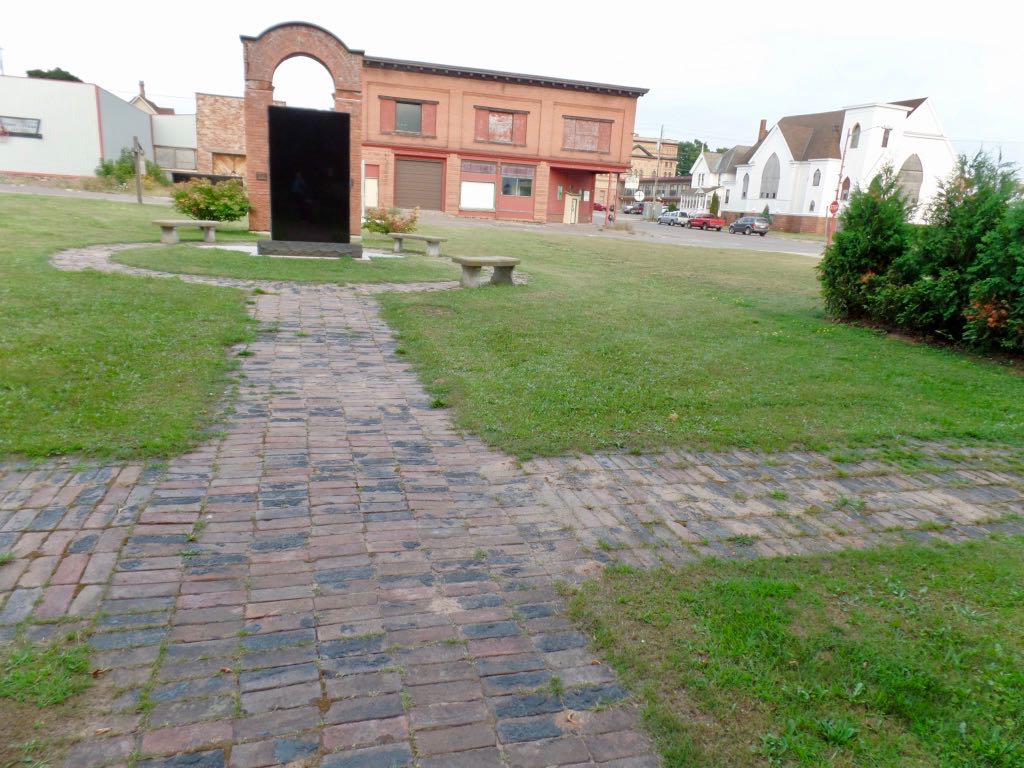 A view from behind the park that's been made from the site. 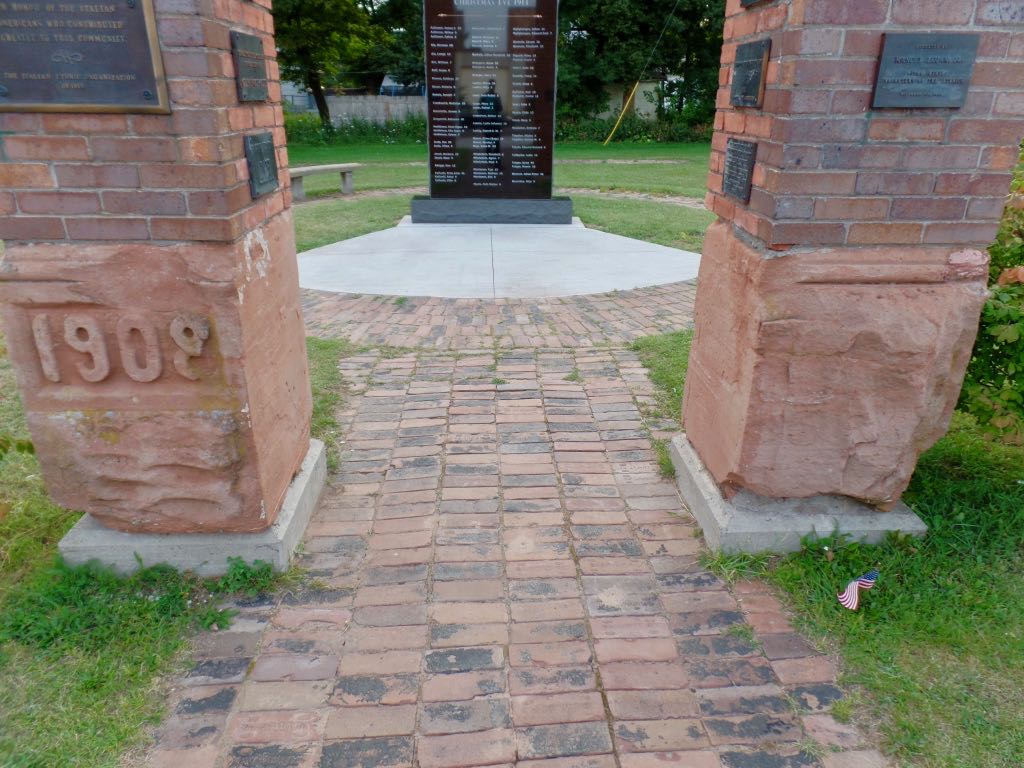 Who called out ``fire'' to start the panic is still regarded as a mystery: was it one of the pinkertons hired by the wealthy mine owners to crush the unionization drive and who had already taken the chance to shoot labor organizers, or was it one of the parents of the five dozen murdered children? Who can possibly say? 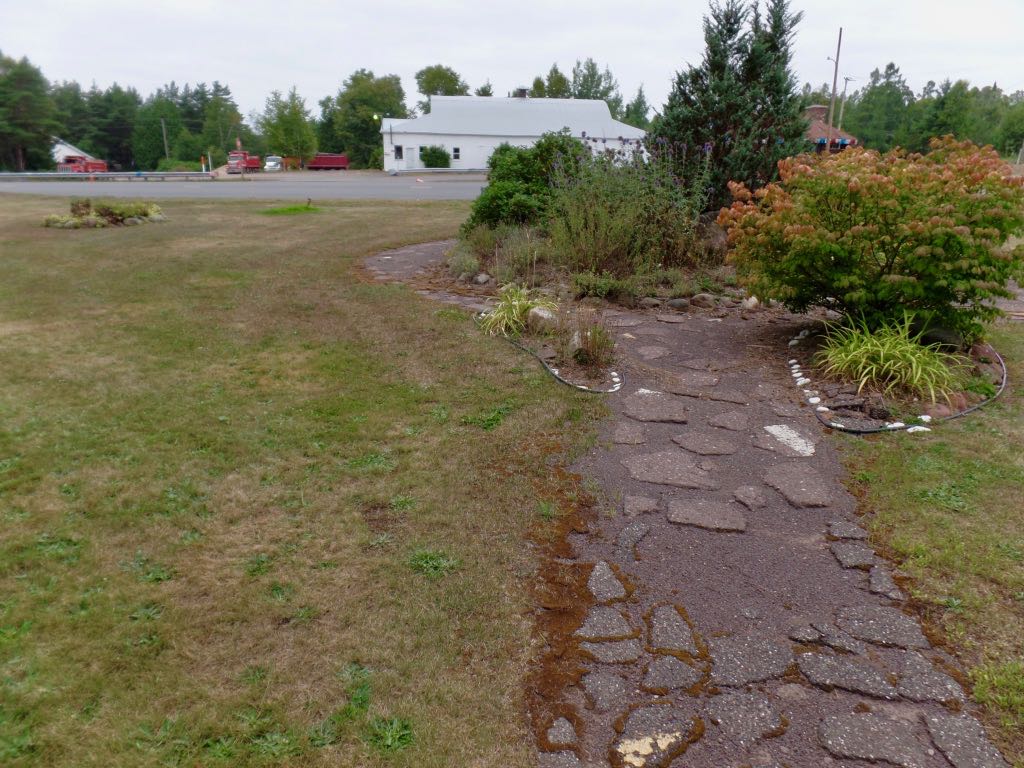 Something a bit more lighthearted here, now. Here's a different roadside park where we had stopped to find another letterbox. This one was successful; we found the box almost immediately. 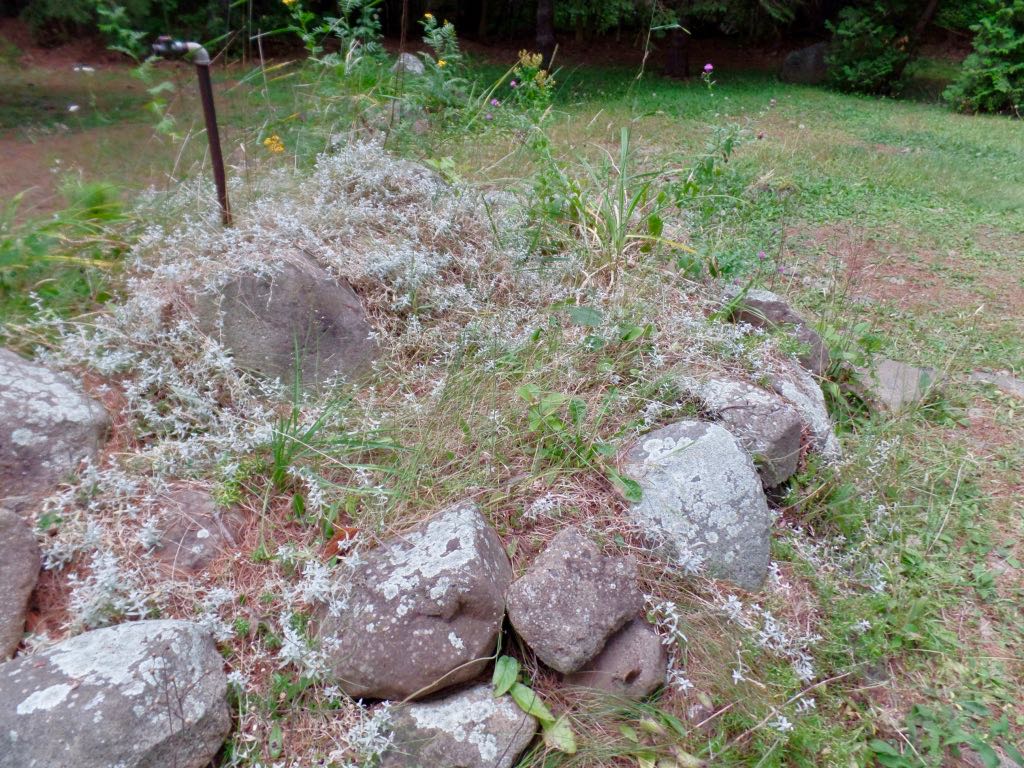 Lovely little rock island of flowers at that park. 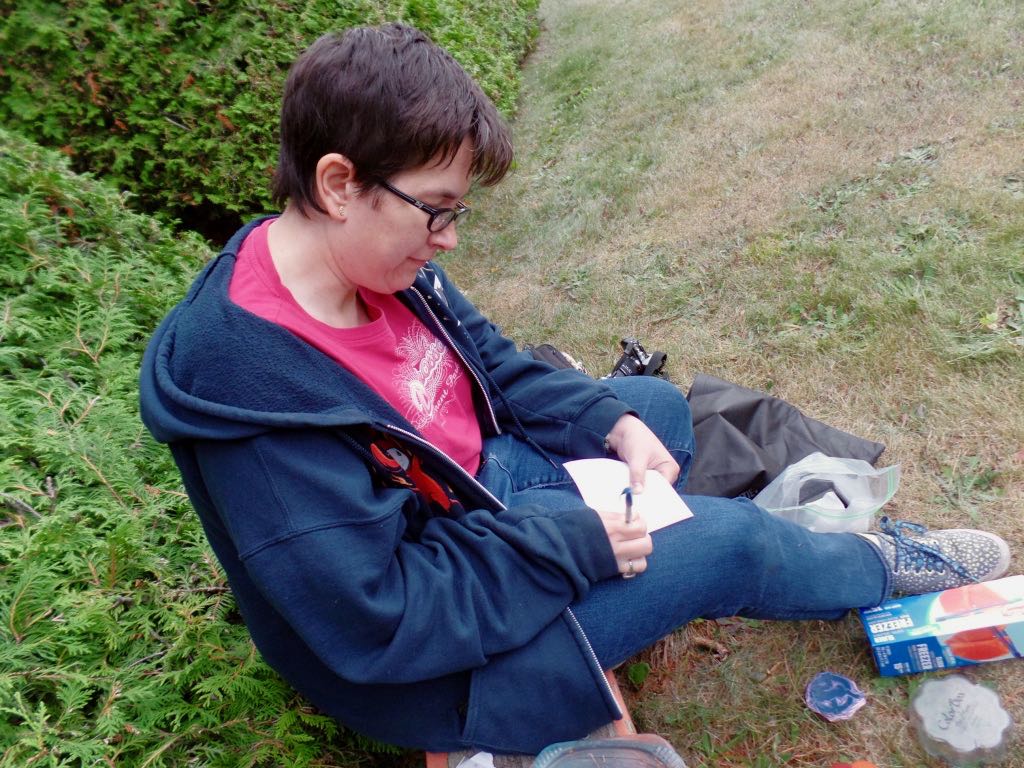 bunny_hugger doing the paperwork for our find. The box of freezer bags is something we got at a supermarket in town. They're good ways to make sure the paper journals don't get water damage. We eventually donated all the bags to needful letterboxes. 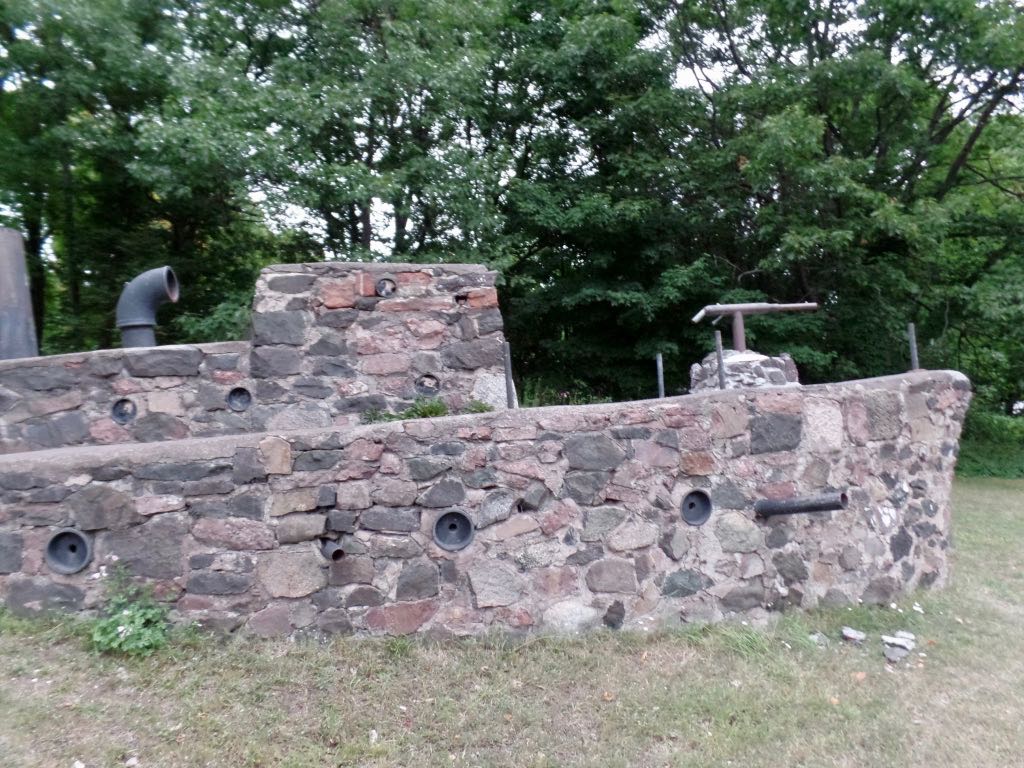 And another park, searching for another letterbox! This one at a small neighborhood park with a WPA-era stone battleship. 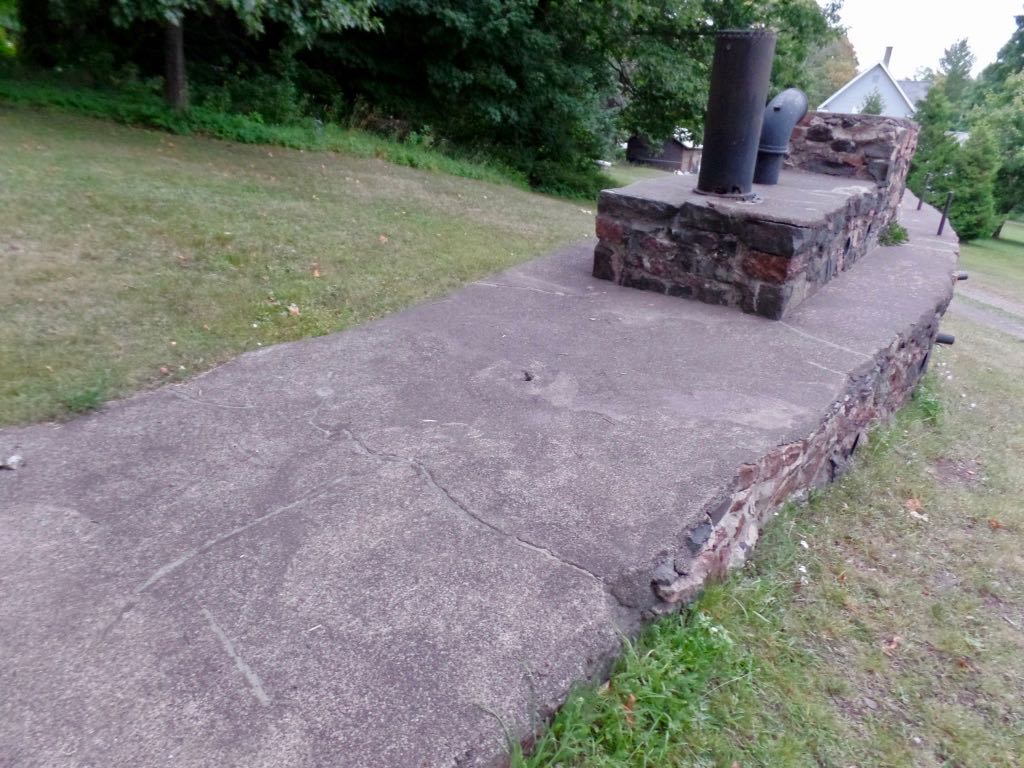 The battleship rises from the ground level, getting eventually high enough that you could probably take a pretty impressive tumble from the bow. 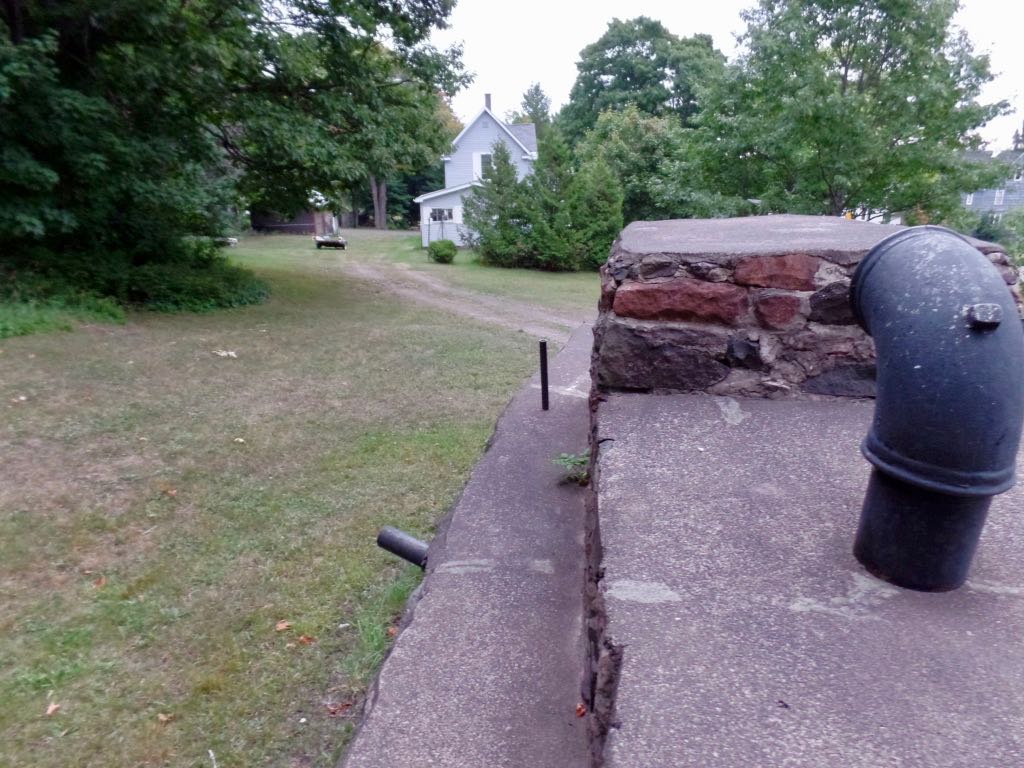 And, you know, it's just in a neighborhood. It's like the little playground at the end of our street, only far more cool. 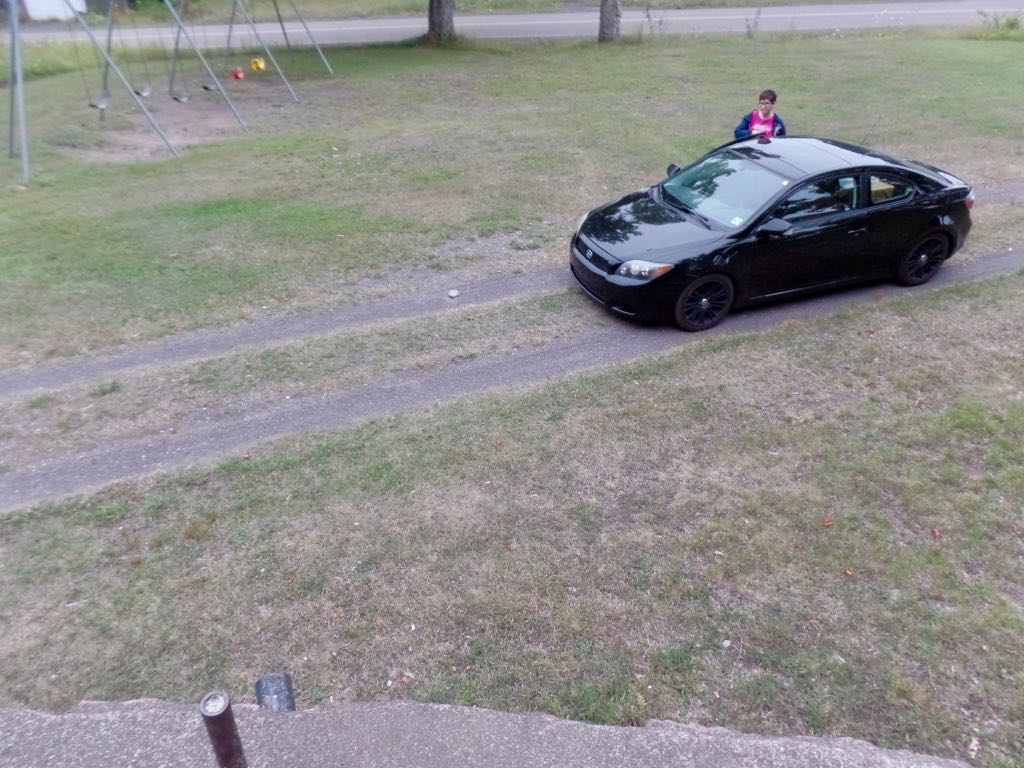 bunny_hugger and my car, from shockingly far away, considering. 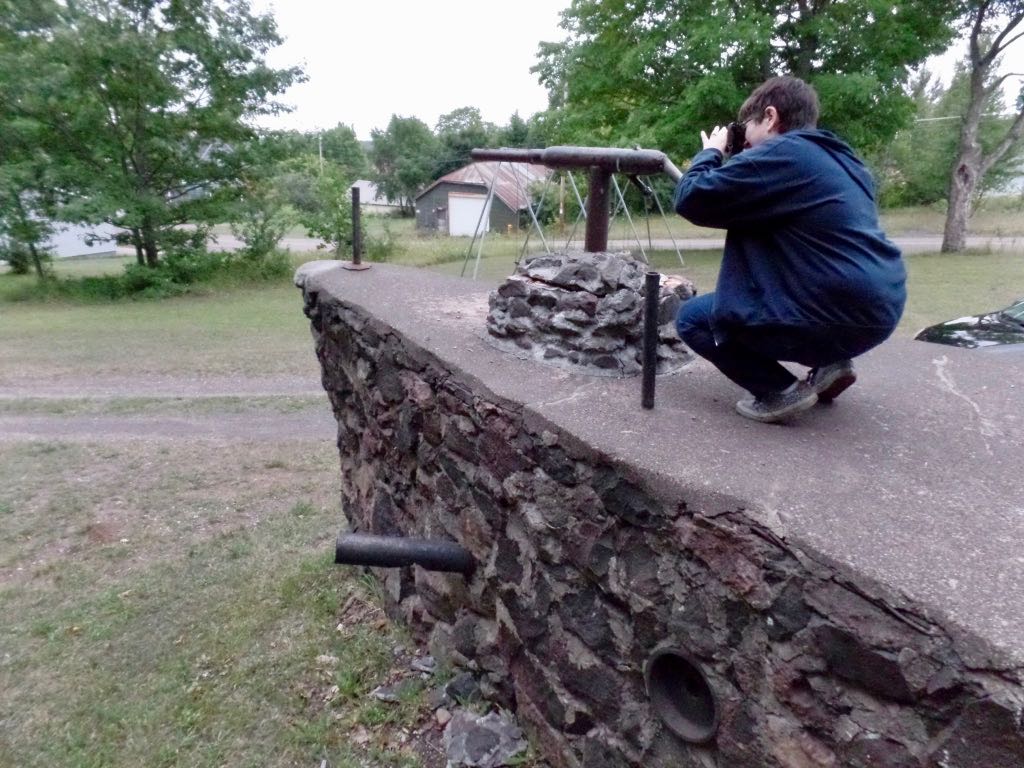 bunny_hugger on top of the battleship, taking some ranges and preparing to open fire. 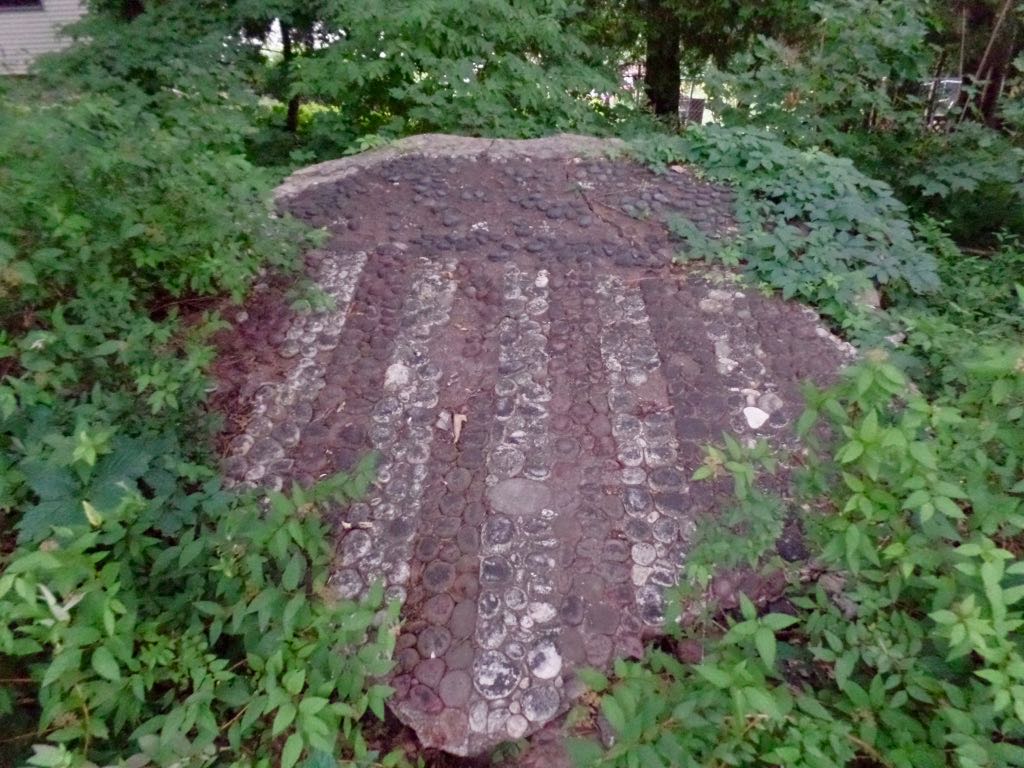 The other centerpiece of the park is this stone replica of the United States shield. It's, clearly, seen better days; the colors are pretty badly faded. 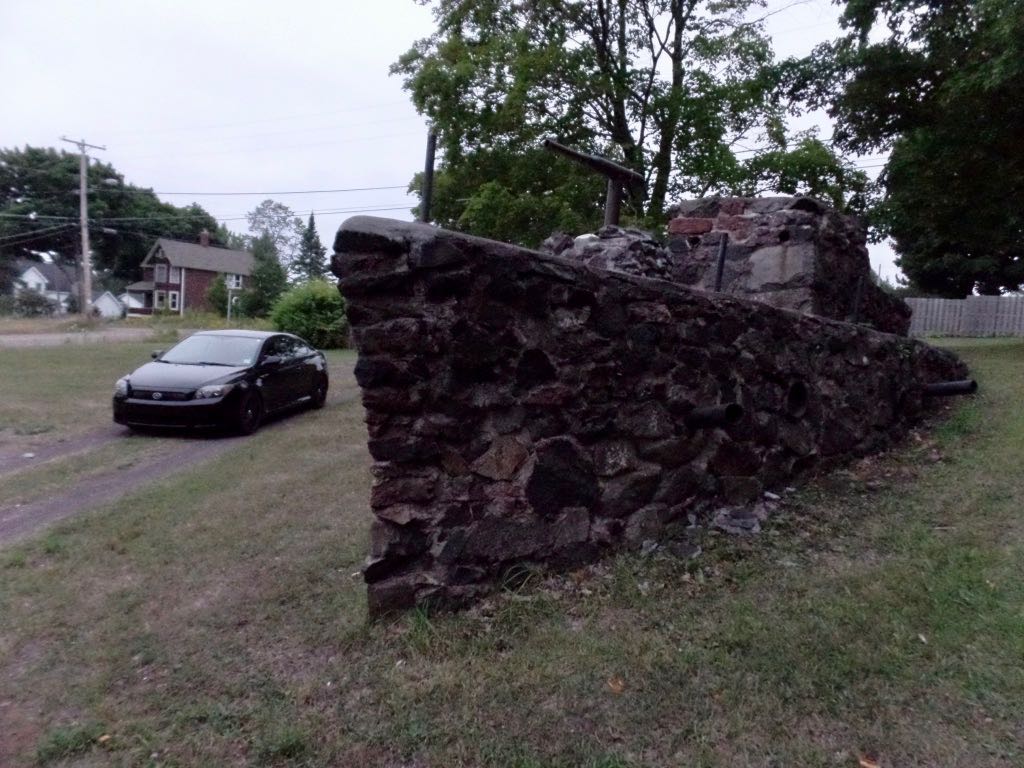 The battleship, and my car beside. This is such a weird set of things to see. We did not find the letterbox.

Trivia: In 1935 Detroit's Ernst Kern stores created a Prep Club of high school boys, in order to give merchandising advice to the store's Varsity Shop. Source: Service and Style: How the American Department Store Fashioned the Middle Class, Jan Whitaker.

Currently Reading: Guardian of the Great Lakes: The US Paddle Frigate Michigan, Bradley A Rodgers.