Now somebody's got ahold of those bells

Motor City Fur[ry] Con has given up on having their 2020 convention in September or October. I suppose that Anthrohio might officially be claiming they'll reschedule their convention later in the year if possible, but I don't expect they'll do it either. KennyCon, the roller coaster enthusiast gettogether at Kennywood park, is also cancelled,

bunny_hugger tells me. I haven't been able to find whether HoliWood Nights, the parallel event at Holiday World, has been postponed. Holiday World officially has delayed the start of their season into June --- they had a ``virtual opening day'' event today on social media --- but goodness knows if that will ever happen.

Particularly urgent news is that Tekko, an anime convention which had postponed from April to the end of June, cancelled altogether. They're held at the David L Lawrence Convention Center, in Pittsburgh, the site of Anthrocon and ReplayFX/Pinburgh. So it's all the more certain Pinburgh will cancel, but they're still not even admitting publicly that they might consider cancelling. Or at least rescheduling.

I guess the next question is whether Pinball at the Zoo, rescheduled from April to the start of October, might happen. Or whether smaller pinball events, things like the monthly Fremont tournaments (which attract under twenty people), might start again. Gads.

Well, back to Keweenaw 2018. Let's have dinner, and then start the next day. 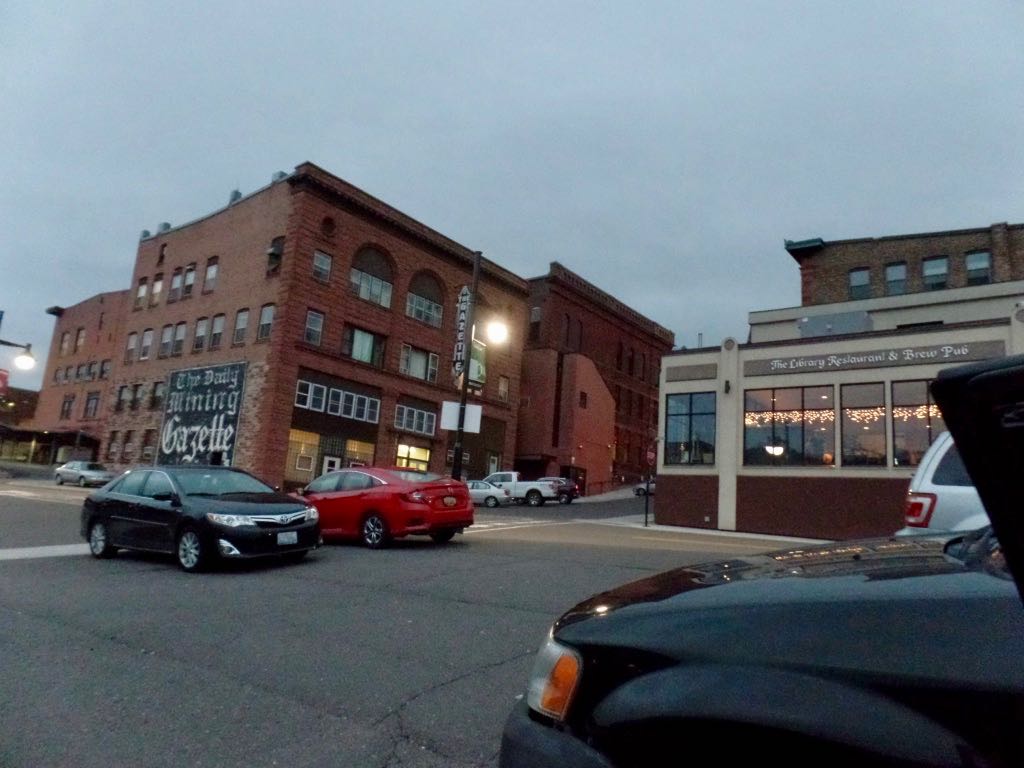 Back to Houghton, for dinner. It was about 9:15 pm, by the way, and it's only dusk. Sunset comes late in Michigan to start with, and the upper peninsula is (nearly wholly) on Eastern Time, and it's at 47 degrees north latitude so sunset comes really late. 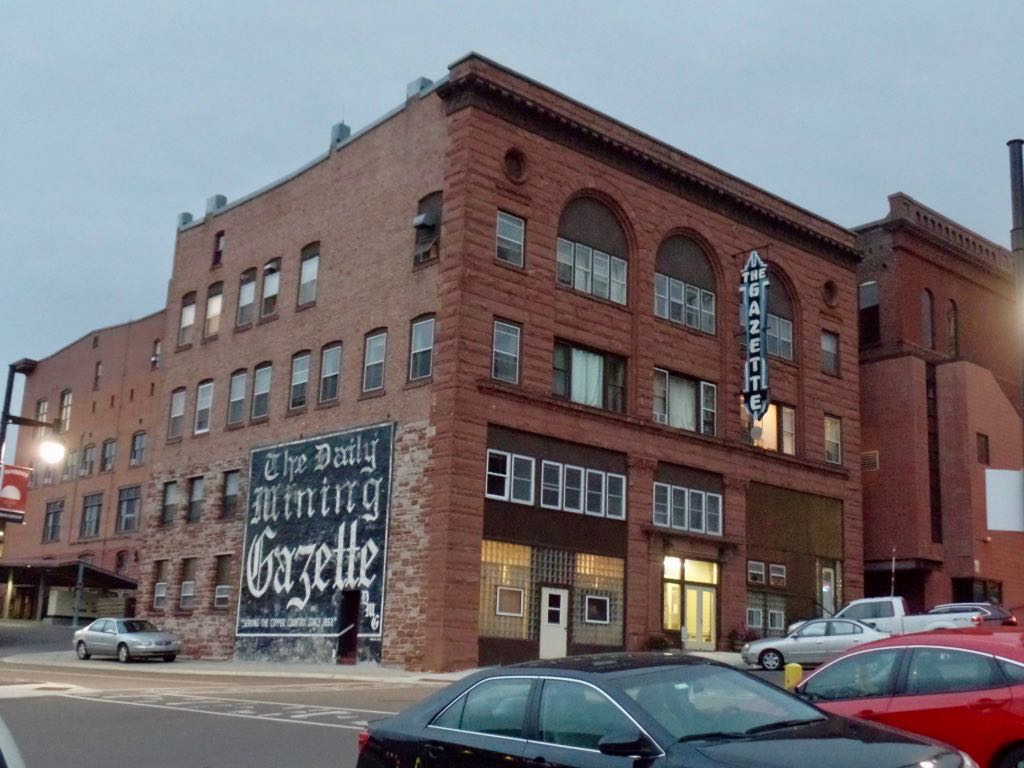 The Daily Mining Gazette, local newspaper and carrying on since 1858; it went daily in 1899. 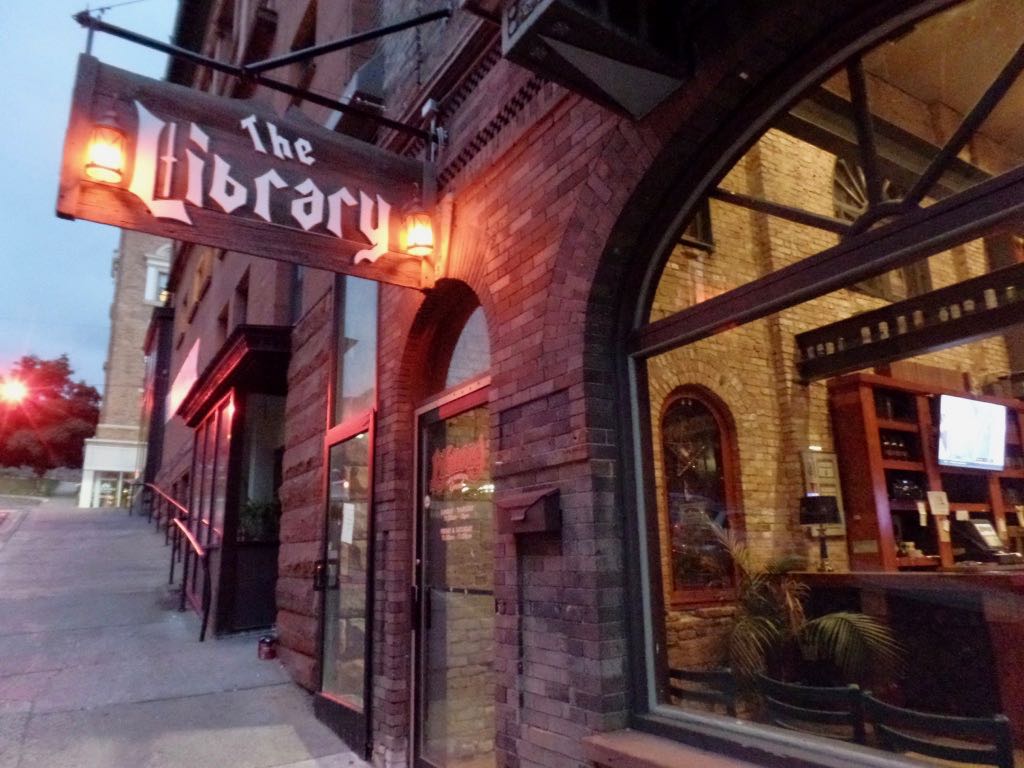 And our dinner restaurant: The Library. So-called, allegedly, so that back in the days students could spend the night at the bar and tell their professors they were at The Library all night. This worked because professors are very naive and unaware of the three places that exist in Houghton, and students are unable to just lie about where they were last night. 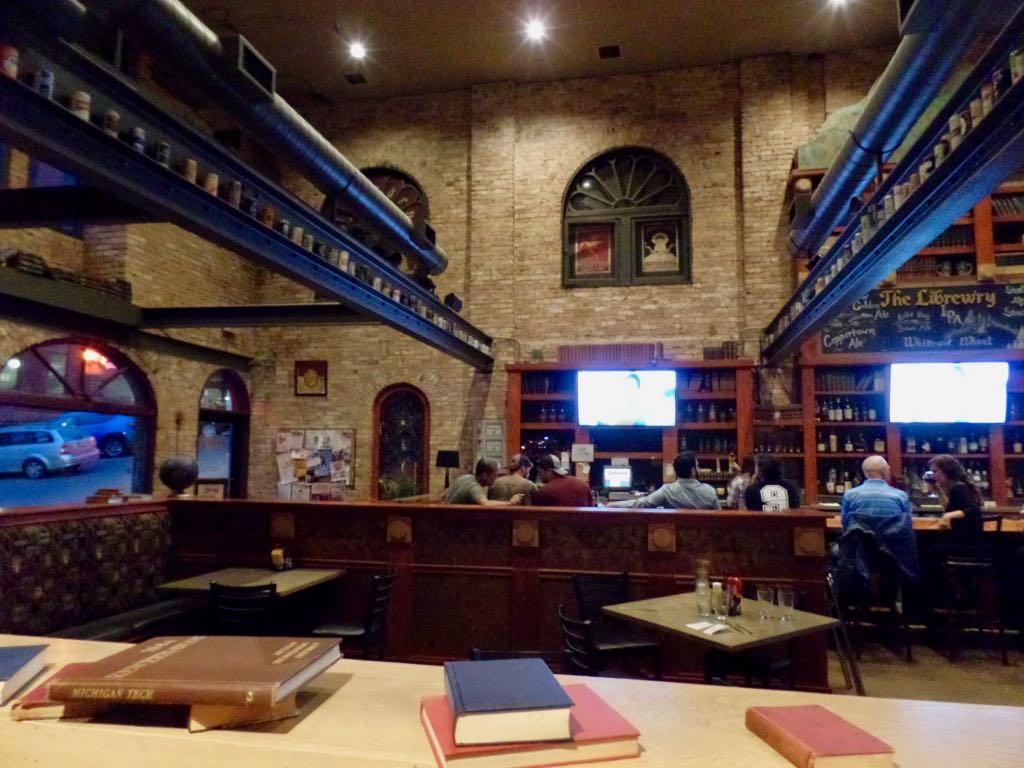 The place is about what you might expect --- notice the list of their beers on the right --- but it does use books to give its name some credibility. Notice the Michigan Tech yearbook by our seat. 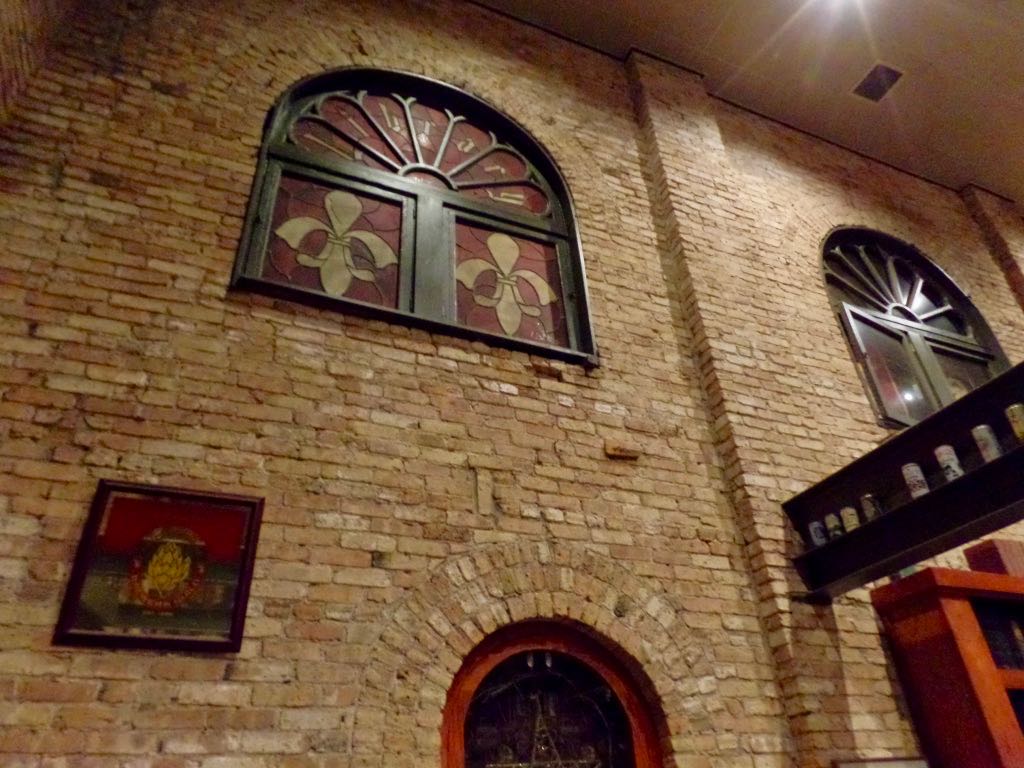 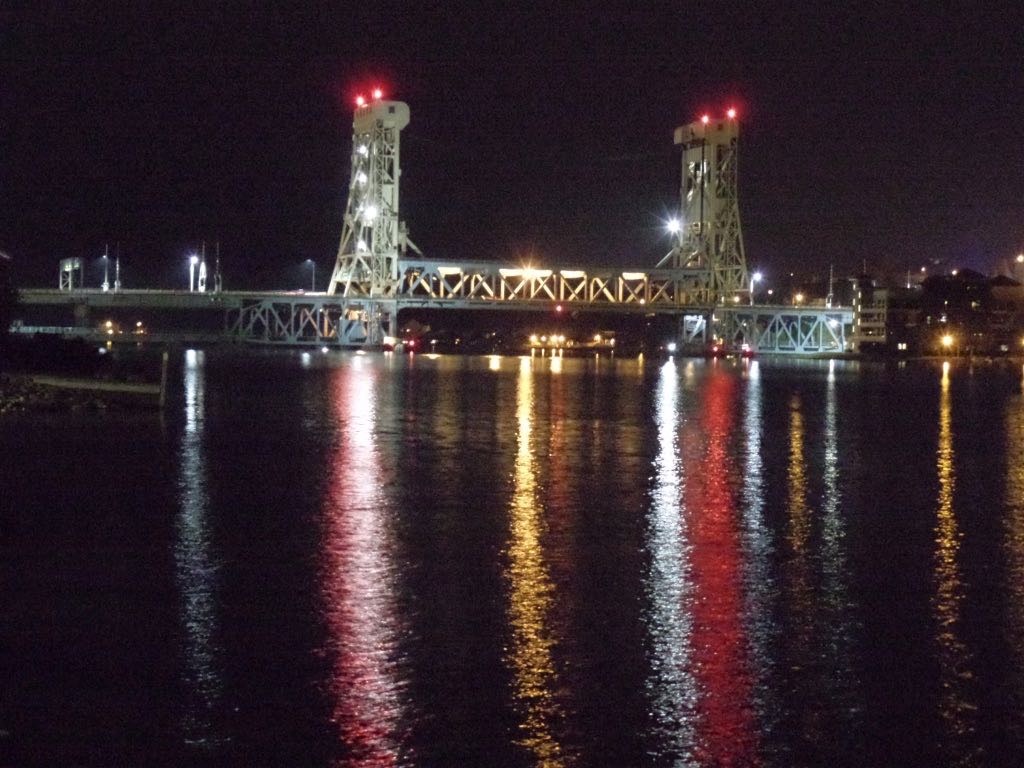 The drawbridge connecting Hancock and Houghton as seen by night. The sun finally set around 10 pm. 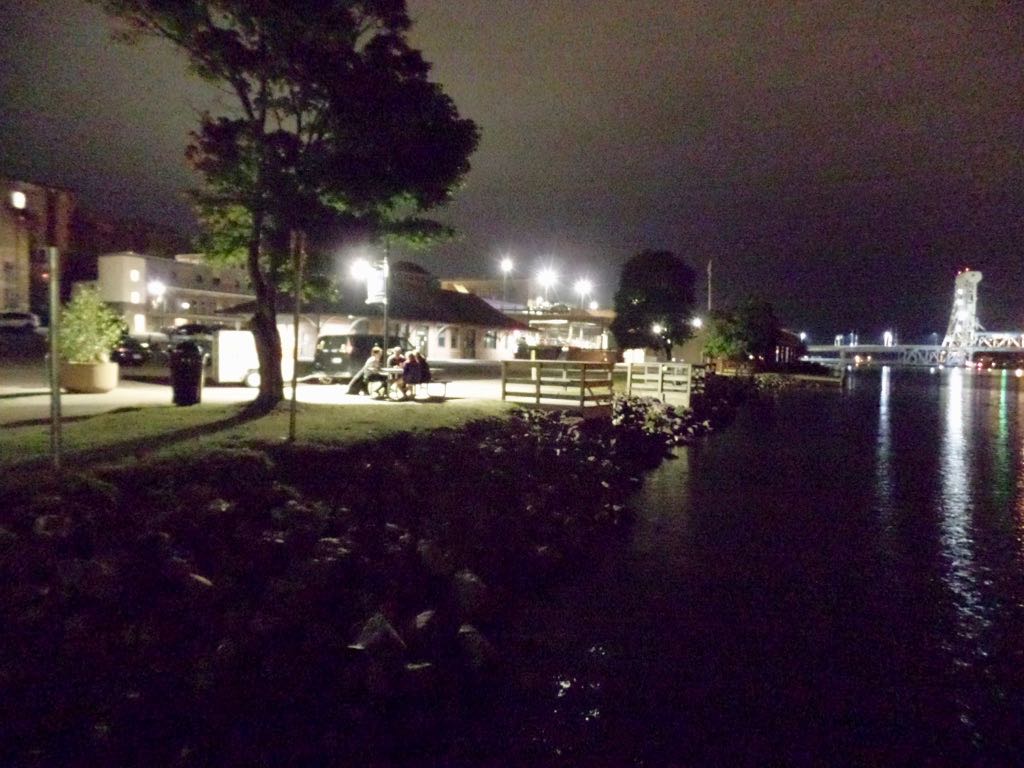 Couple of people hanging out in the park, the one that had that guitar-player earlier, by night. 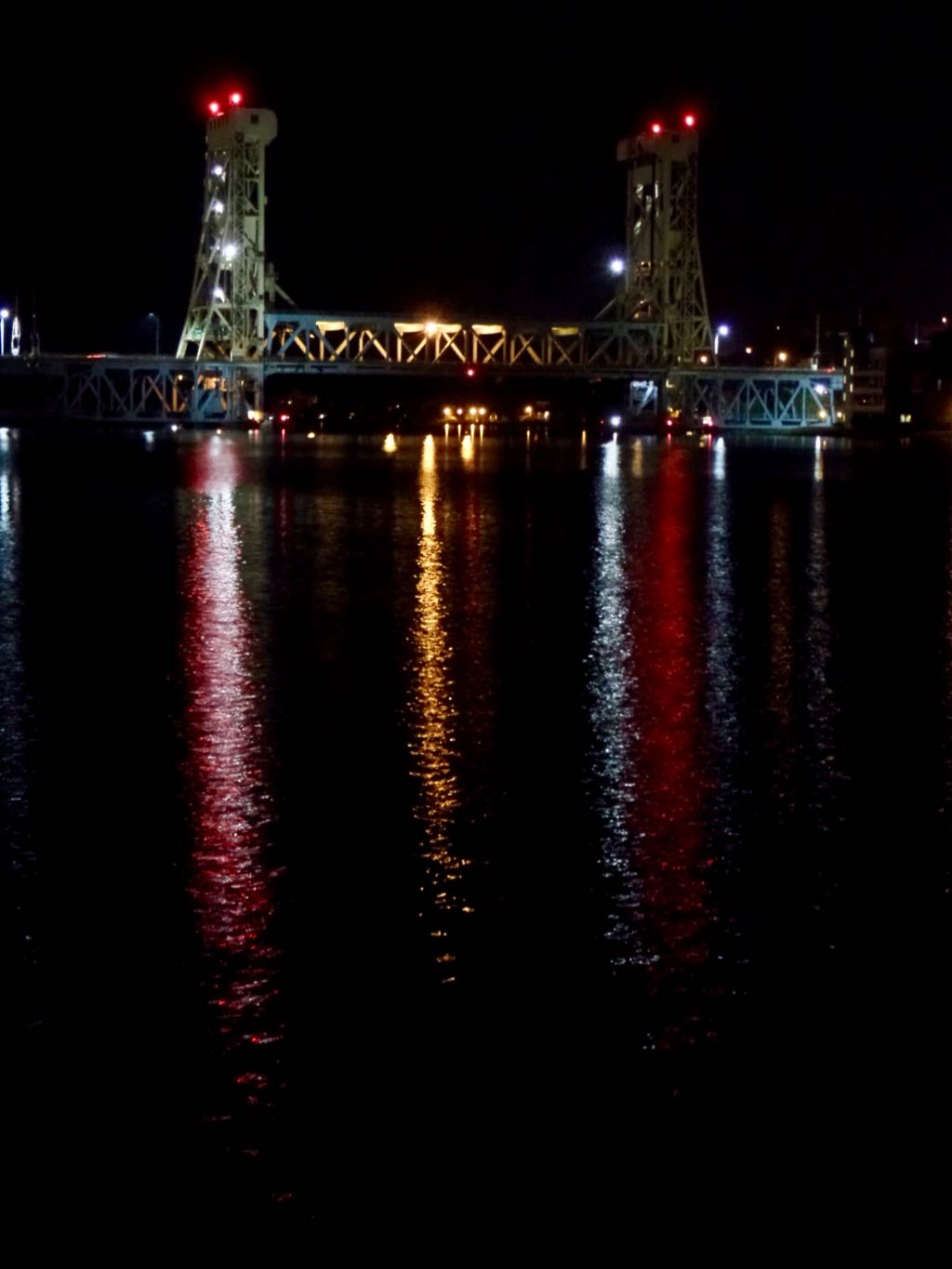 And here, I finally discover the low-light mode for my camera! The drawbridge now seen a little more clearly and with better lighting. 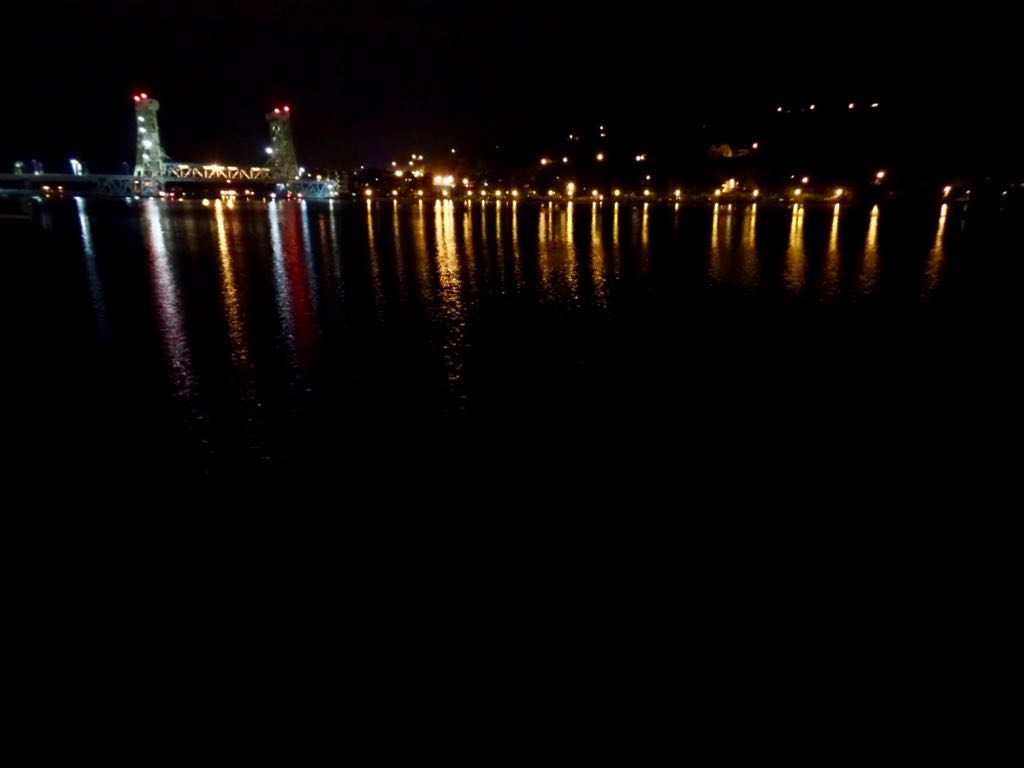 And a broader view now of the drawbridge and the far shore of Hancock.

The next day, I asked what about the other WPA-era concrete battleship.

bunny_hugger didn't know what I was talking about. So I pointed out where it was, when we were driving to that day's touring, and here we go. 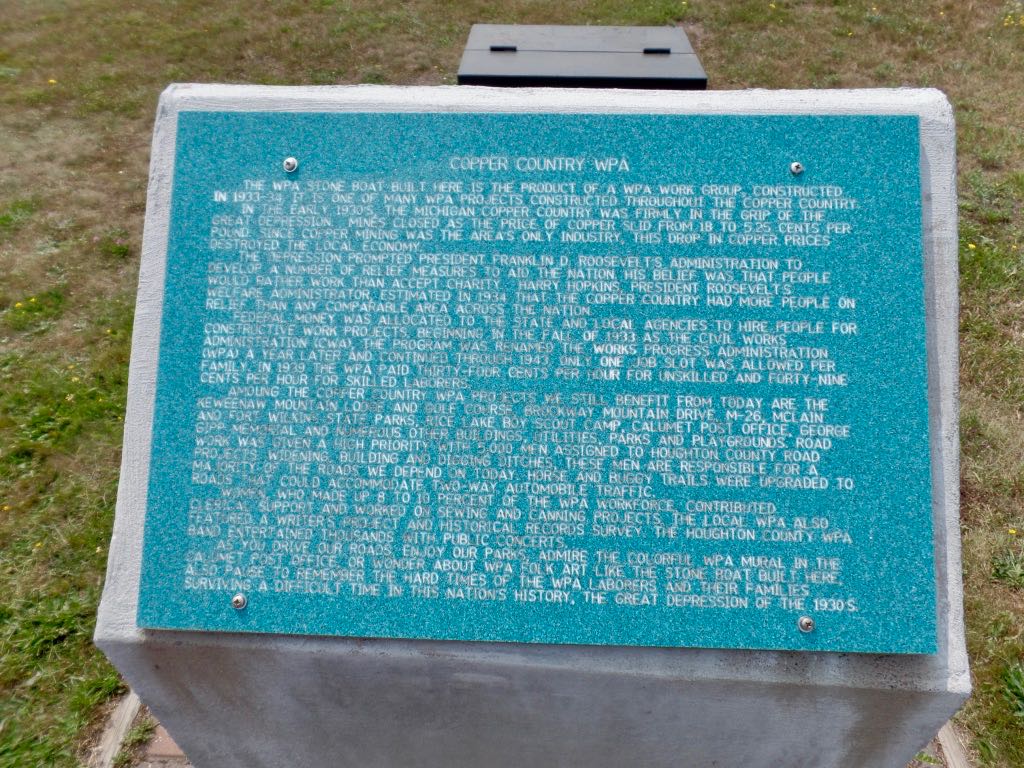 A plaque explaining the stone boat, a WPA project that's ``one of the many'' built in the copper country. The other one, so far as I could tell, has no explanation. 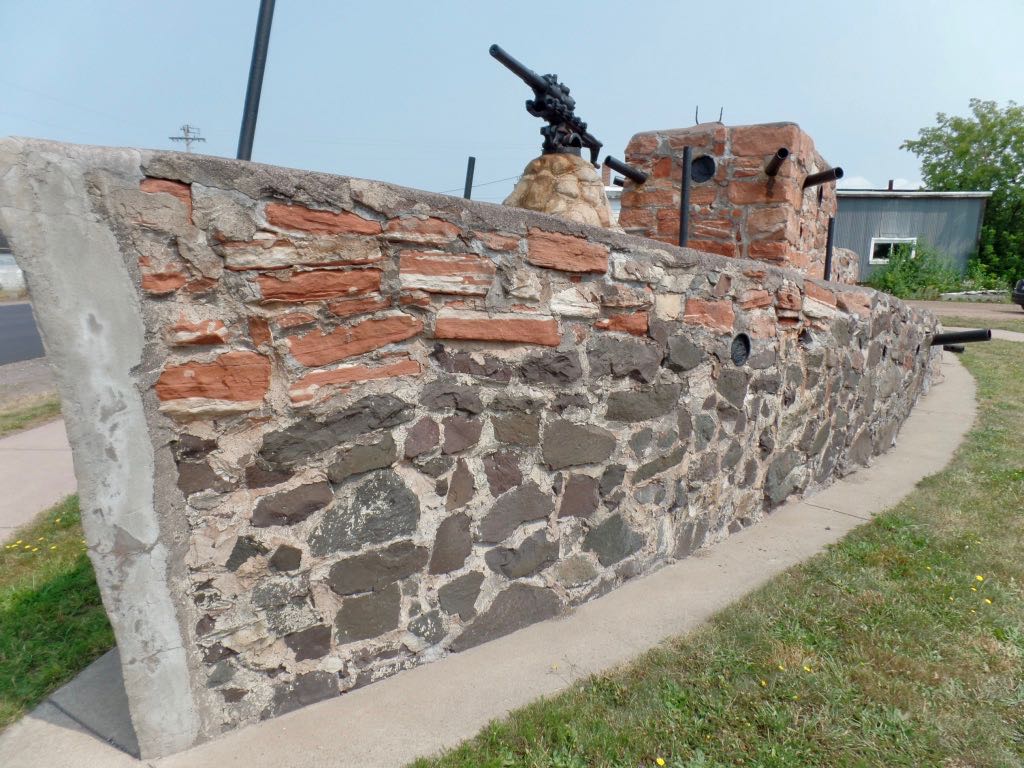 The stone reconstruction, which is in this small park by the side of US 41. 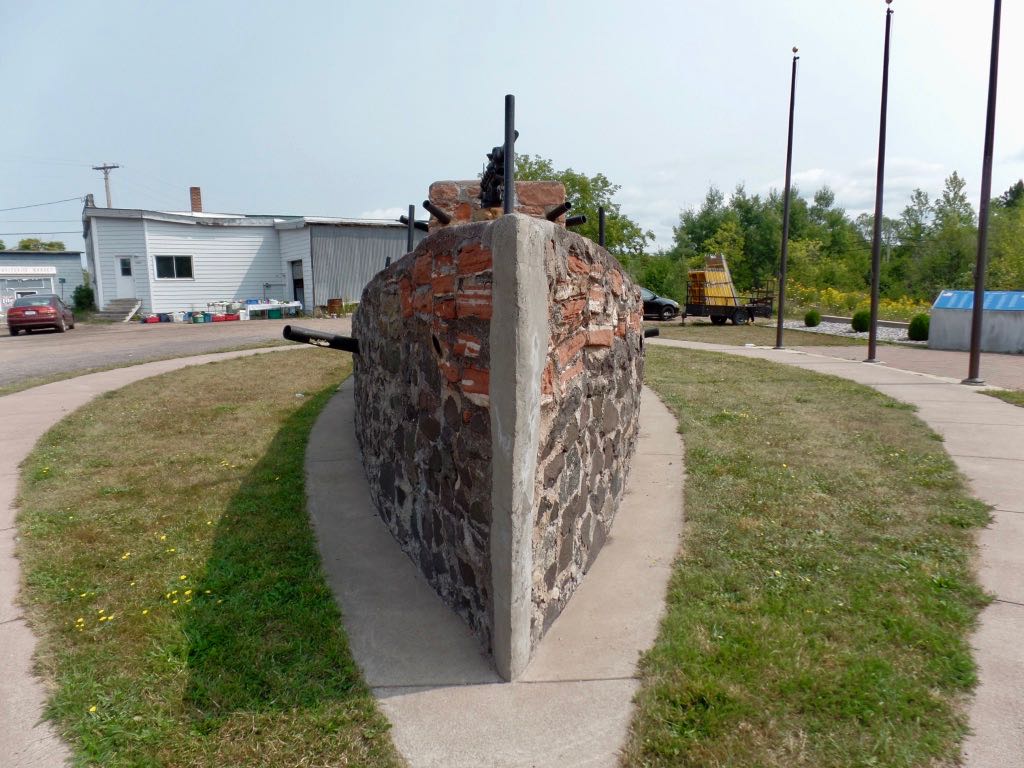 Looking at the boat from front on. To the right you can see flagpoles and some of the plaques for the various Kearsarge naval ships. 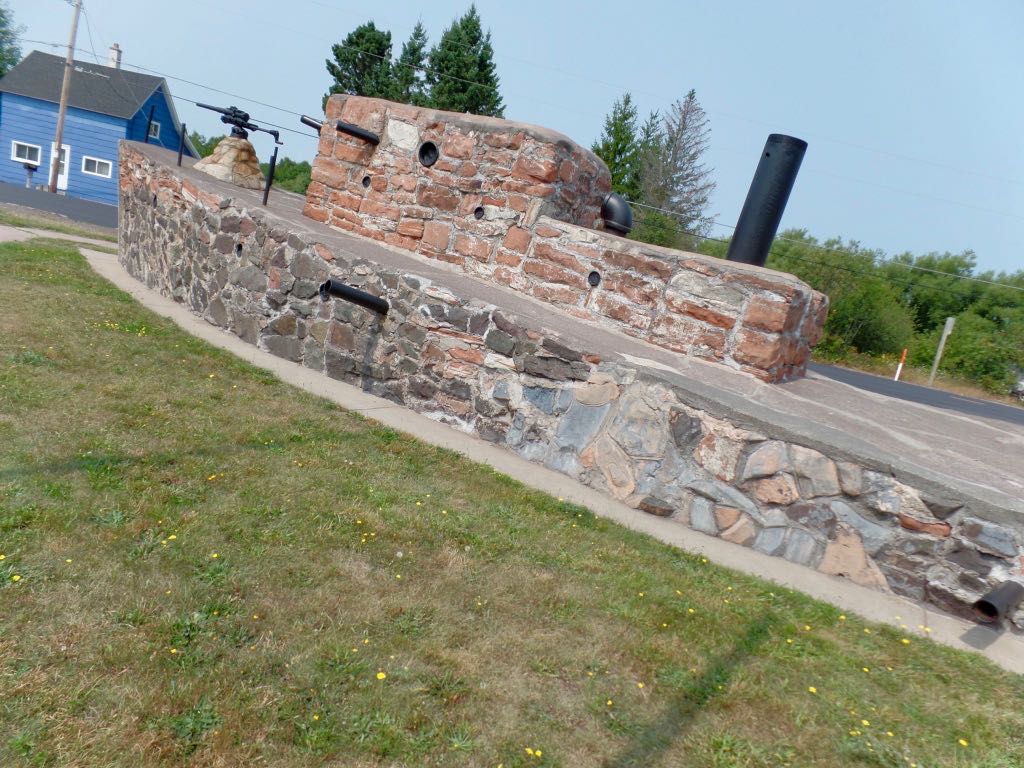 View of the boat from the side, letting you see the way it rises from near the ground to high enough you could fall off. 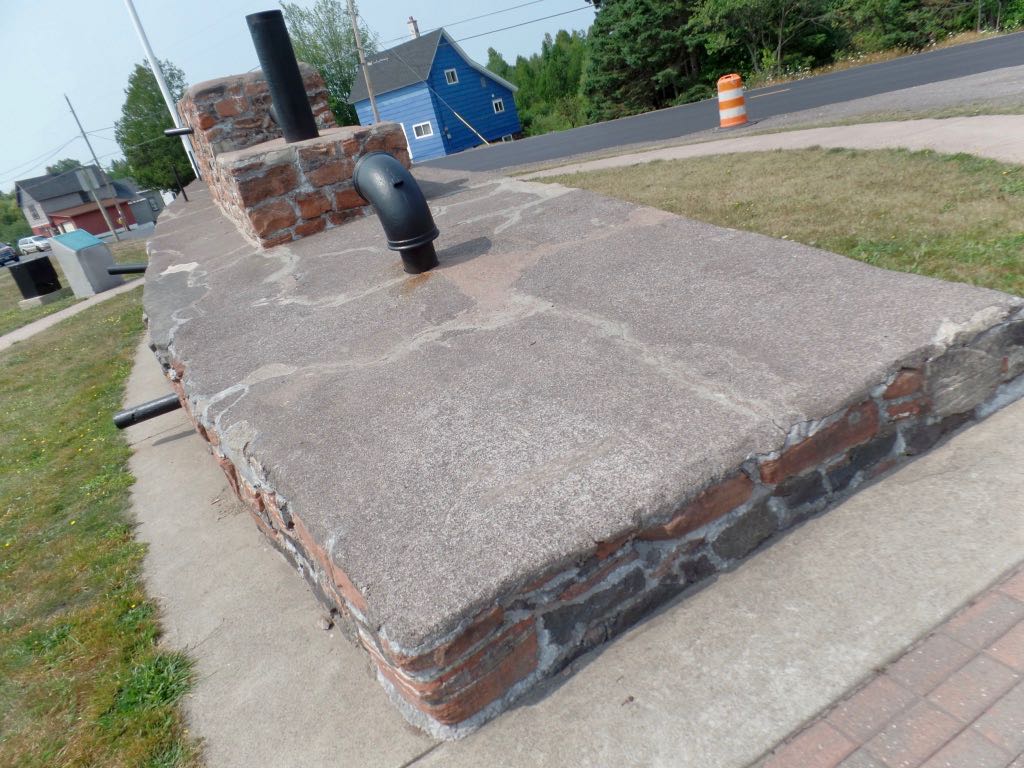 The boat as seen from behind, where it's a pretty easy step for an able-bodied adult. 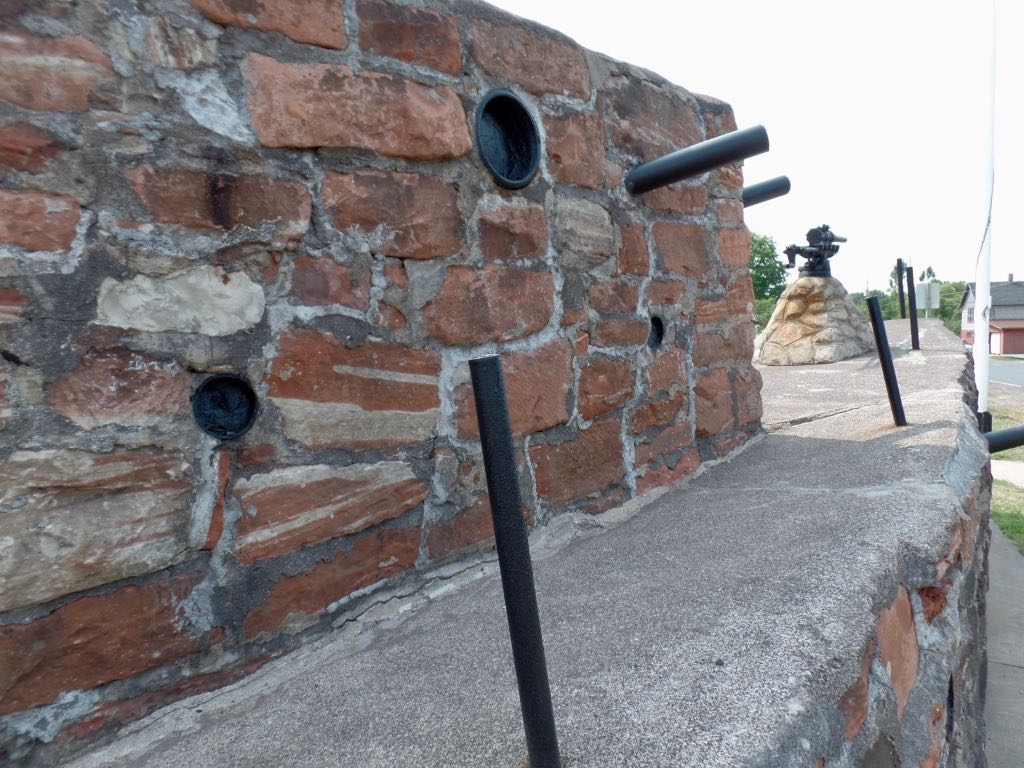 The side of the boat from close up, getting a good view at the fake gun turrets, as well as vertical posts from which some kind of restraint might possibly be attached, but were not.

Trivia: More than 1300 Native Americans, from as far west as the Mississippi Valley and as far east as Acadia, representing at least forty nations attended the conference for the Great Peace of Montreal of 1701. Source: Masters of Empire: Great Lakes Indians and the Making of America, Michael A McDonnell.

Currently Reading: Guardian of the Great Lakes: The US Paddle Frigate Michigan, Bradley A Rodgers.