No marigolds in the promised land

ReplayFX cancelled today, finally. We expected it. They're rolling our Pinburgh tickets over to next year, which is great for us since we won the time lottery and got tickets in the three-second window of availability.

This is unfair to everybody who didn't happen to refresh their web browser on the correct page the moment tickets were available, and it's not fair to the people who decide between February 2020 and spring of next year that they'd like to try Pinburgh. I would expect, without thinking too deeply, that maybe one or two hundred of the thousand people who had tickets for the 2020 tournament will want to cancel or not do 2021 at all, but even 200 cancellations won't fill the already-existing wait list of about 500 people, never mind take care of more people.

(Pinburgh has resisted raising prices to reduce demand to the 1,000-person capacity of the tournament. This I believe is for ideological reasons, to keep the tournament from being even less accessible to poorer people. And that's fine. But it needs to go to a lottery for tickets. Giving tickets to the people who happen to hit the right moment after 12:00 on Sale Day is unfair to people with slower Internet, or who have poor typing skills, or who need, say, a text-to-speech tool on their web browser.)

ReplayFX/Pinburgh 2021 is scheduled for the 12th through 15th of August, 2021. Which is a relief to know, really. There's an academic conference in summer 2021 that we might conceivably go to, and that might have interfered with Pinburgh. But that's set for the last week in July. The academic conference is in Australia, and ... well, nearly two weeks is a bit tight to refresh and re-set from a flight around the world, but it's doable. Here's hoping the world is in shape for us to do it. 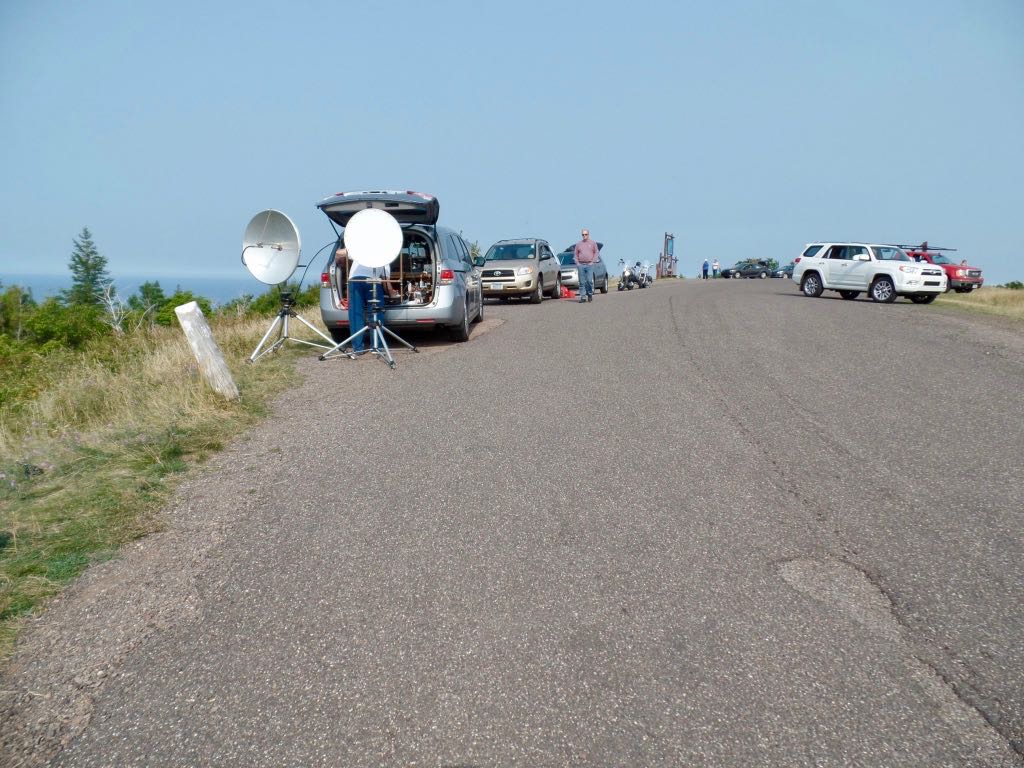 So what we had here was a pack of ham radio operators. There was a contacts-race event going on, trying to make contact with as many people as possible. For that sort of event, the higher you can get your antenna the better, and so the top of a mountain, or at least a 700-foot-tall hill, is pretty good. 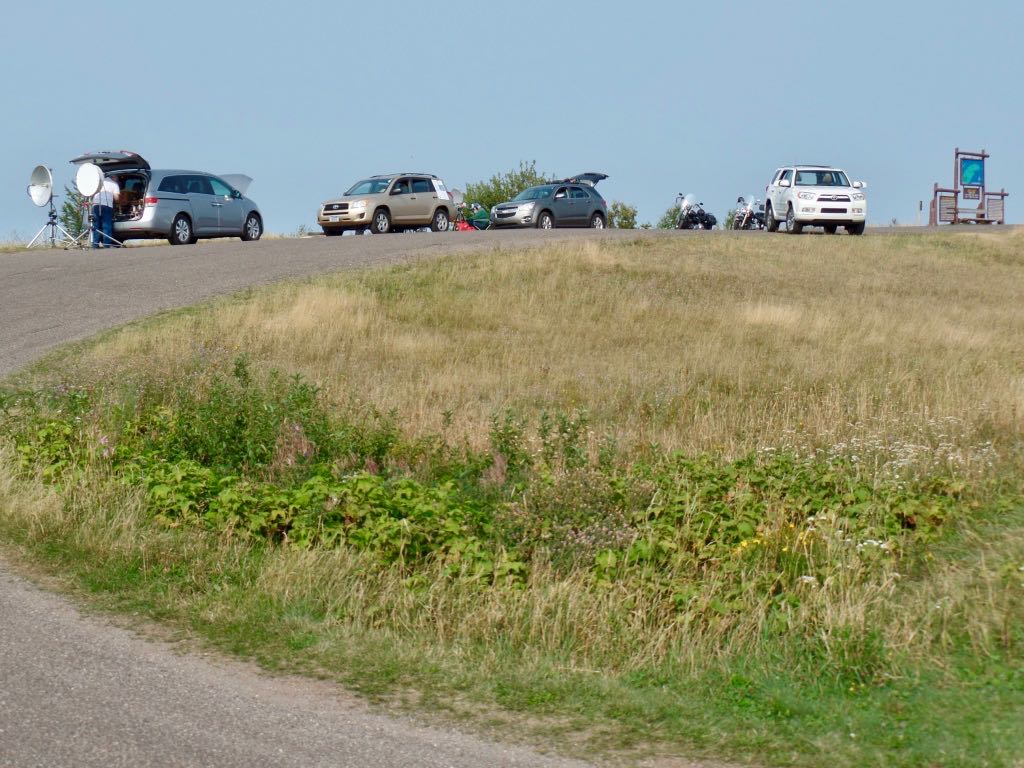 While we walked around we could hear the strangely-modulated timber of voices, altered by their bounces off the ionosphere, and saying things about QRO (``should I increase transmitting power'') and the like. 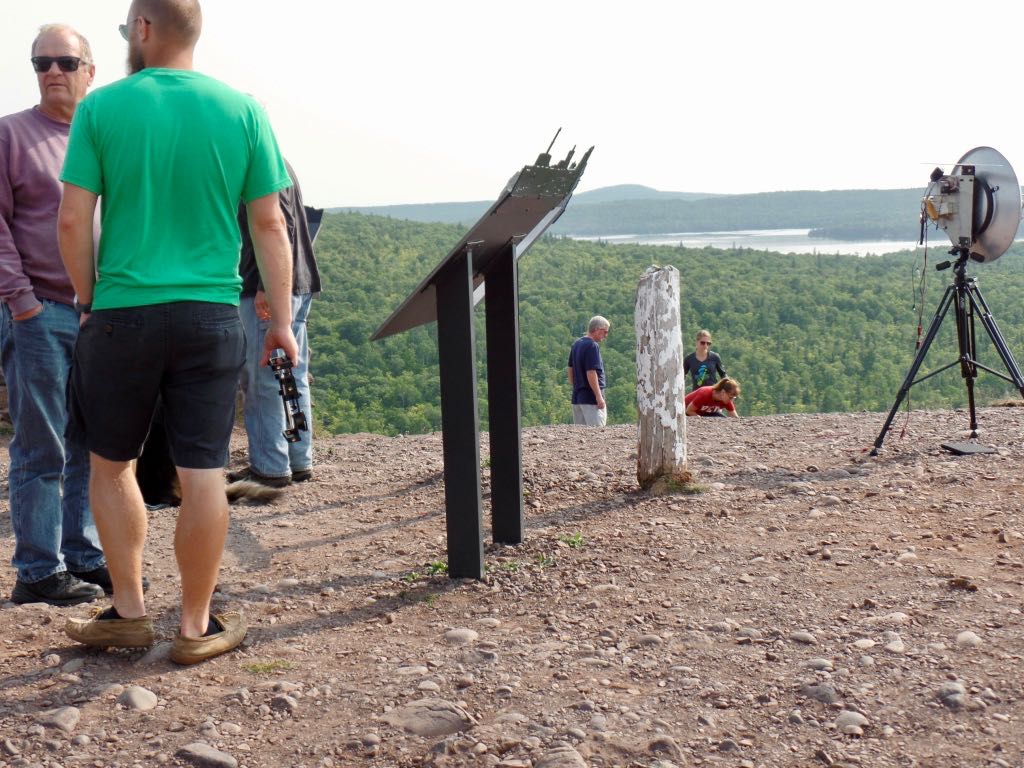 Handful of ham radio operators and one of the radio dishes that's set up there. 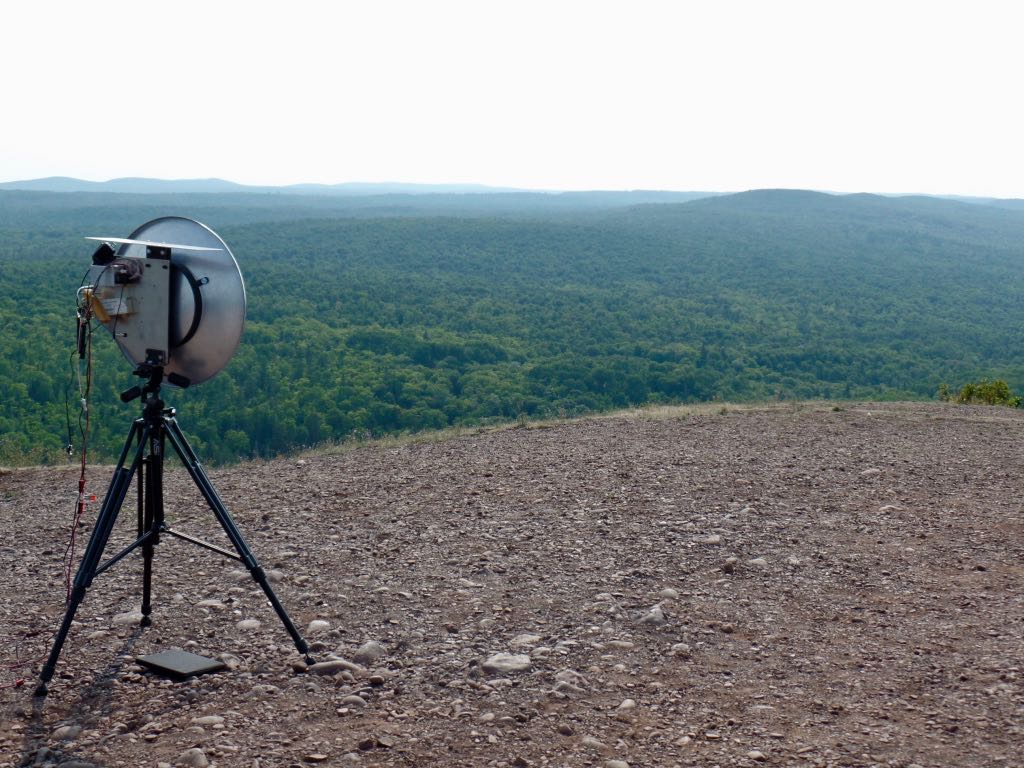 Temporary antenna set out and pointing a bit over the horizon. If I'm making out maps right, this is pointing roughly west . 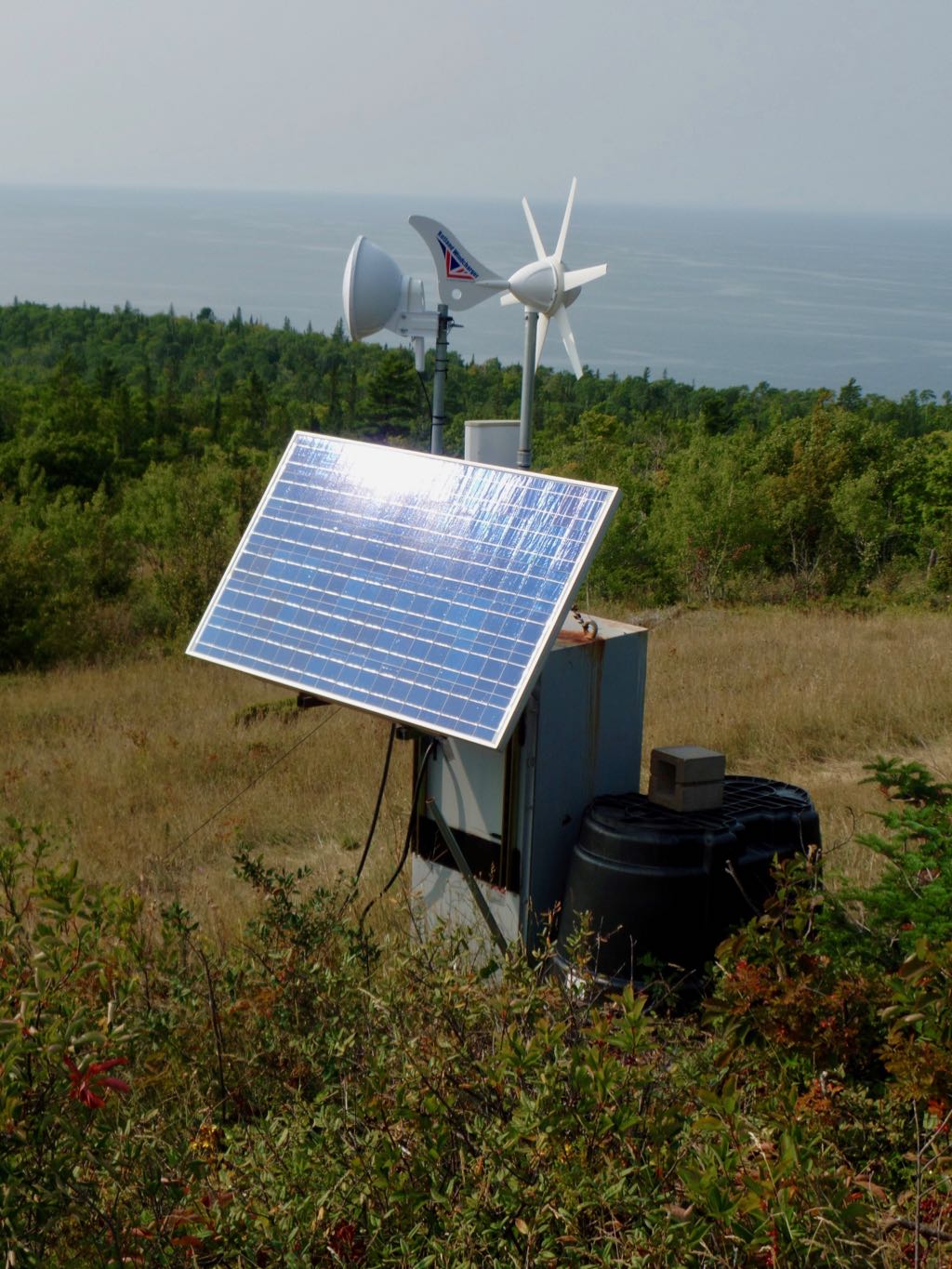 Not some ham radio gear! This is a small solar-powered weather station that's a permanent fixture. 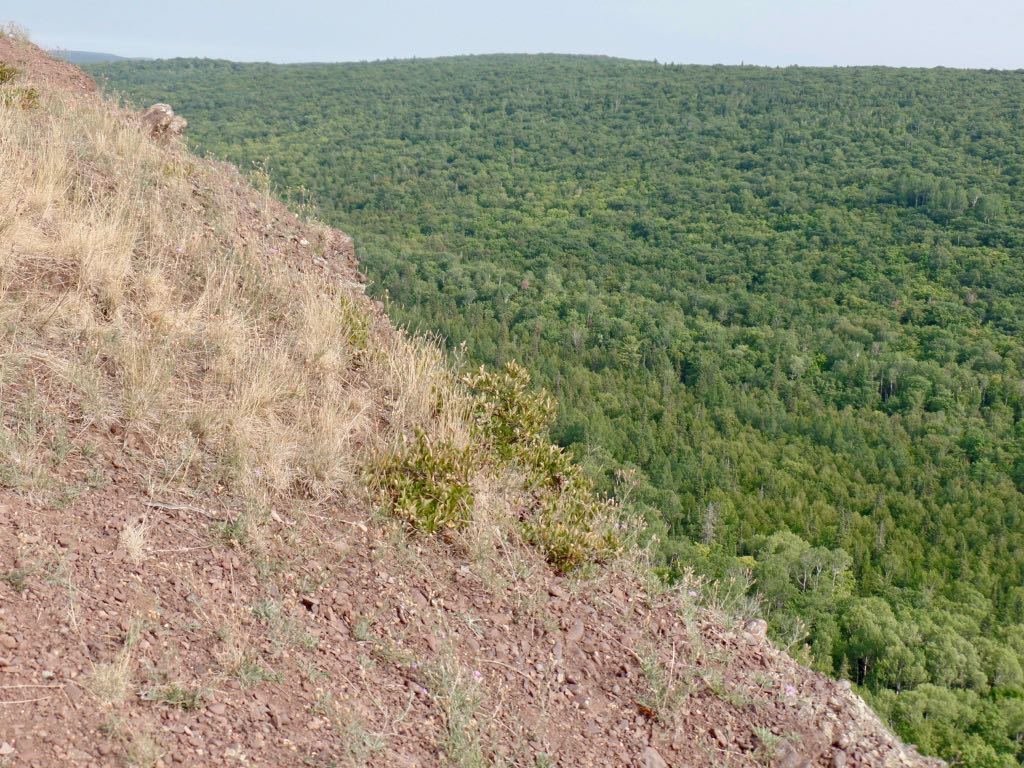 And now? We see how close I can get to the edge of the bluff without alarming my precious bride. 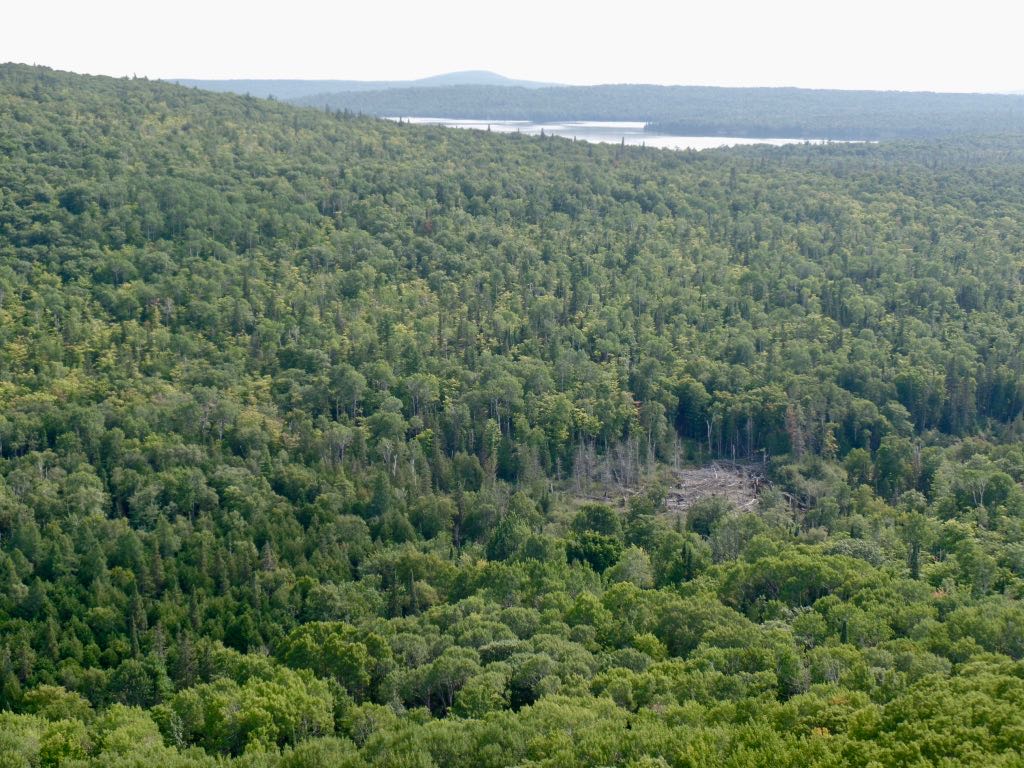 Looking out over the forest. Notice there's a little spot where the trees have all died off. This maybe reflects some recent change in the water table? Hard for an amateur like me to know. 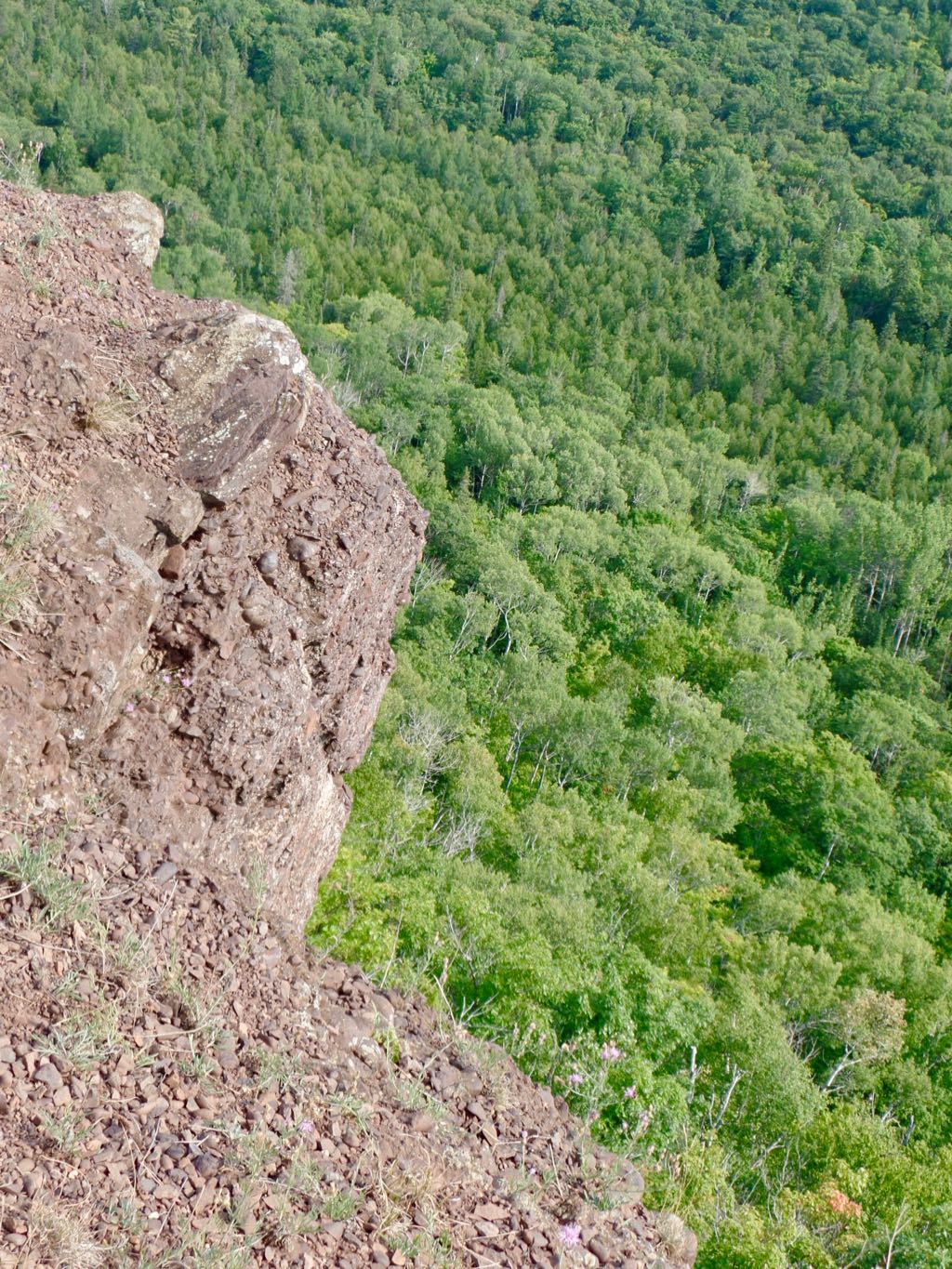 The bluff comes to some pretty dramatic edges, and only your good sense keeps you away from them. 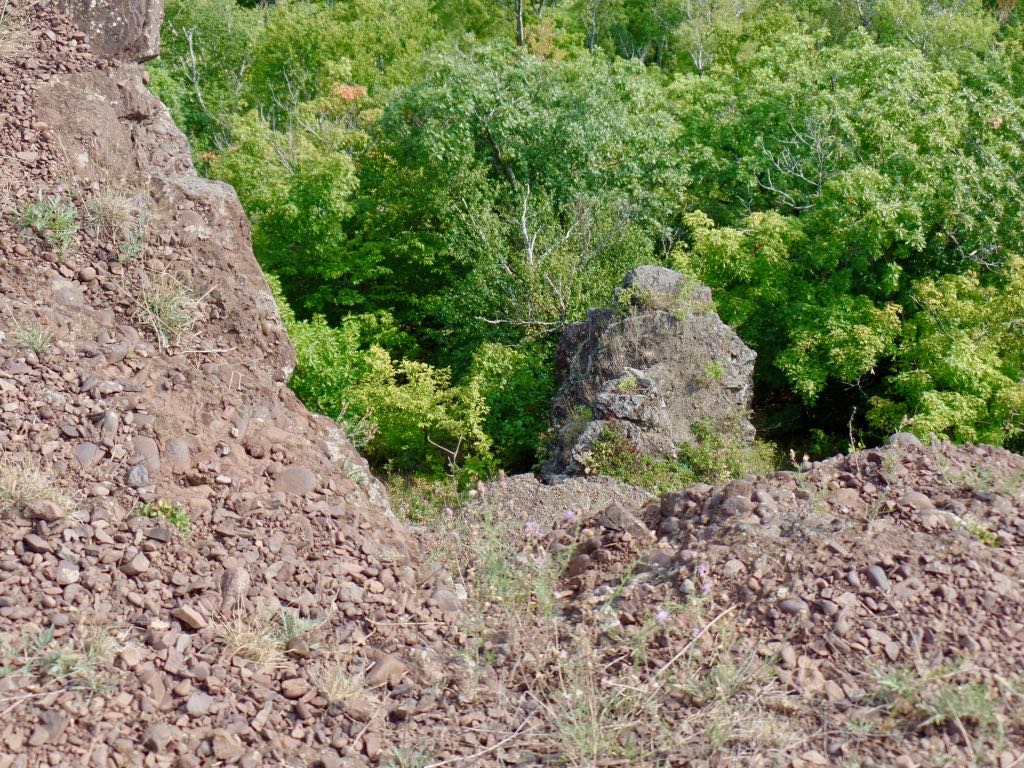 Still, I couldn't get enough of looking down on the forest like this. When we got back to our temporary home, my toes got all cold and wobbly. 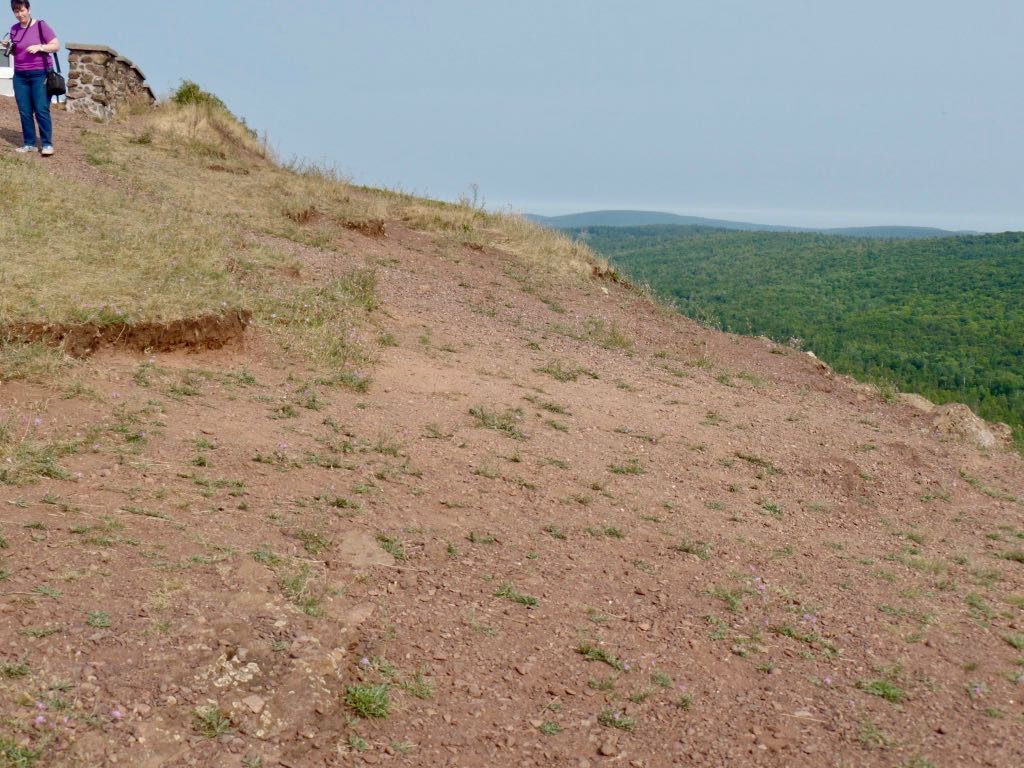 bunny_hugger has had about enough of me getting near the edge. I have too. 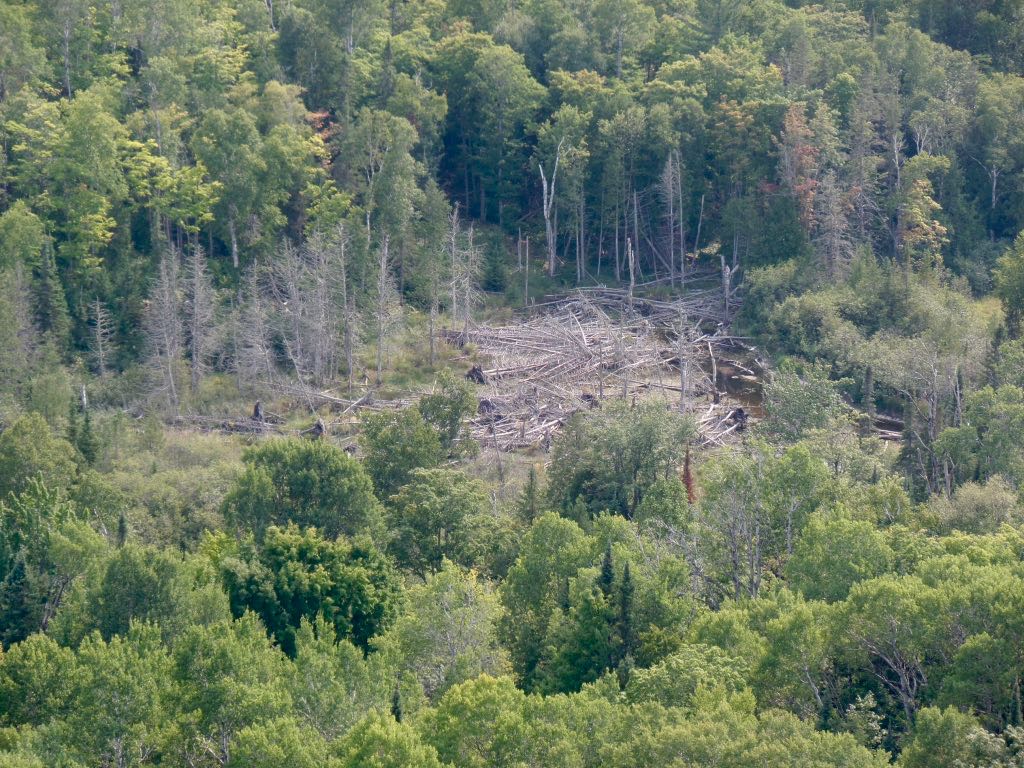 A closer look at that patch of dead forest.

You knew I would try making a panoramic photograph, though. 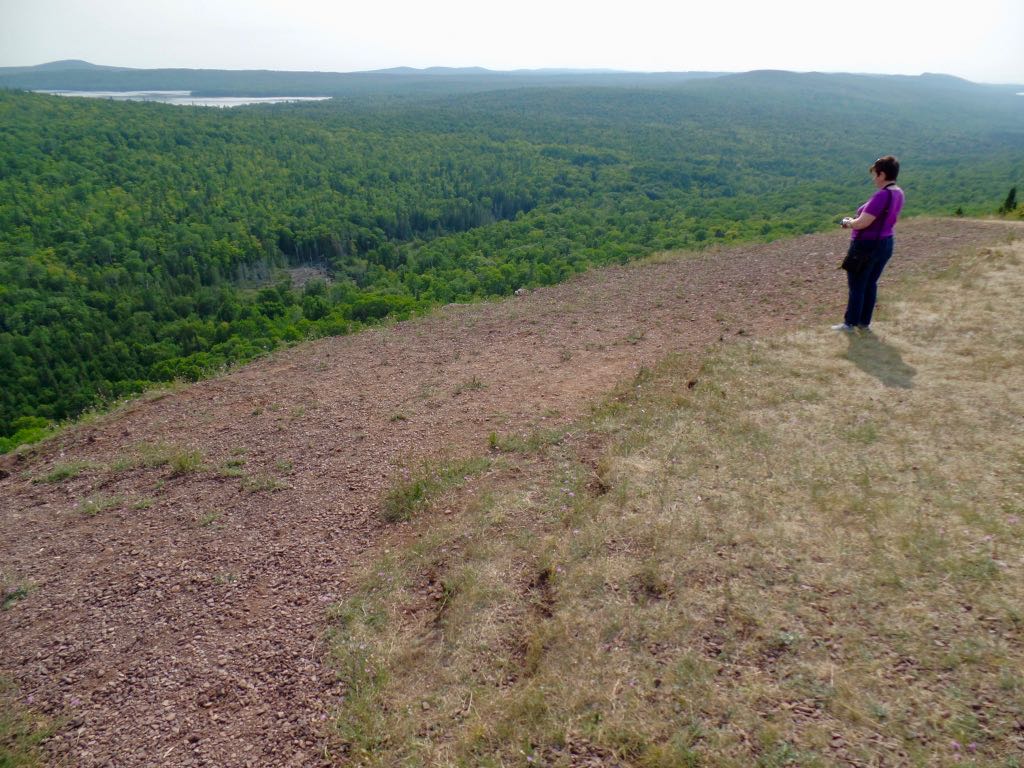 bunny_hugger looks to the edge of the world and disapproves of my having got that near it. Also you see how far you have to go down the slope before you're actually at a dangerous spot. 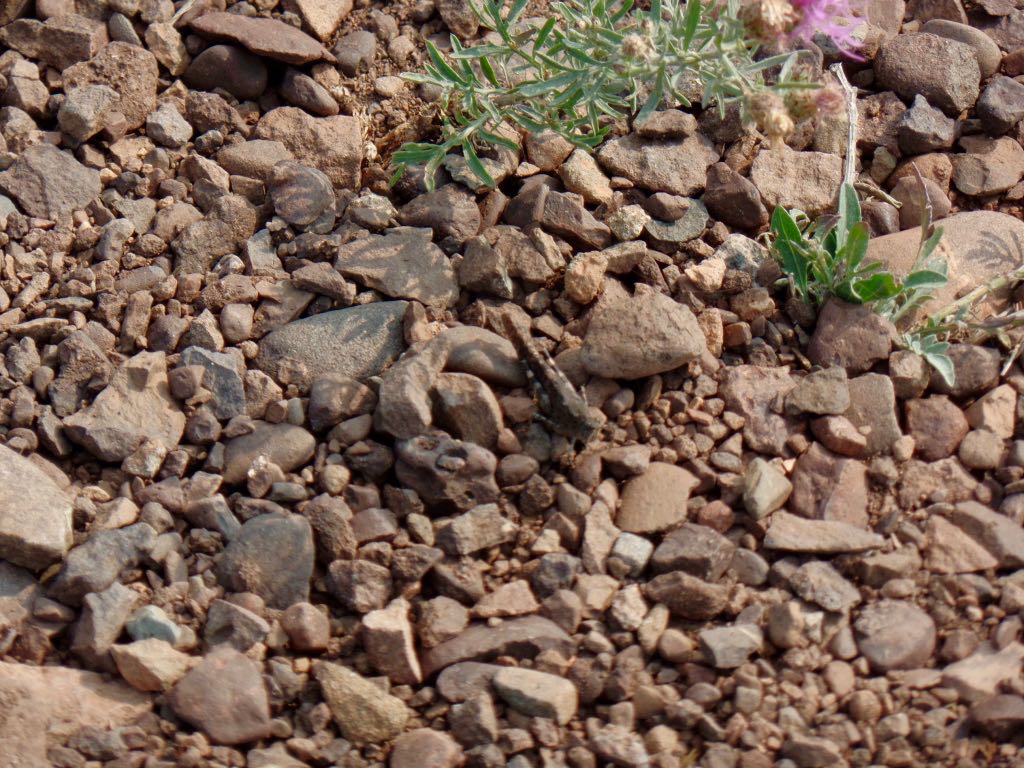 Wildlife! We found whatever the heck this bug is; it was at least an inch long and fairly noisy. 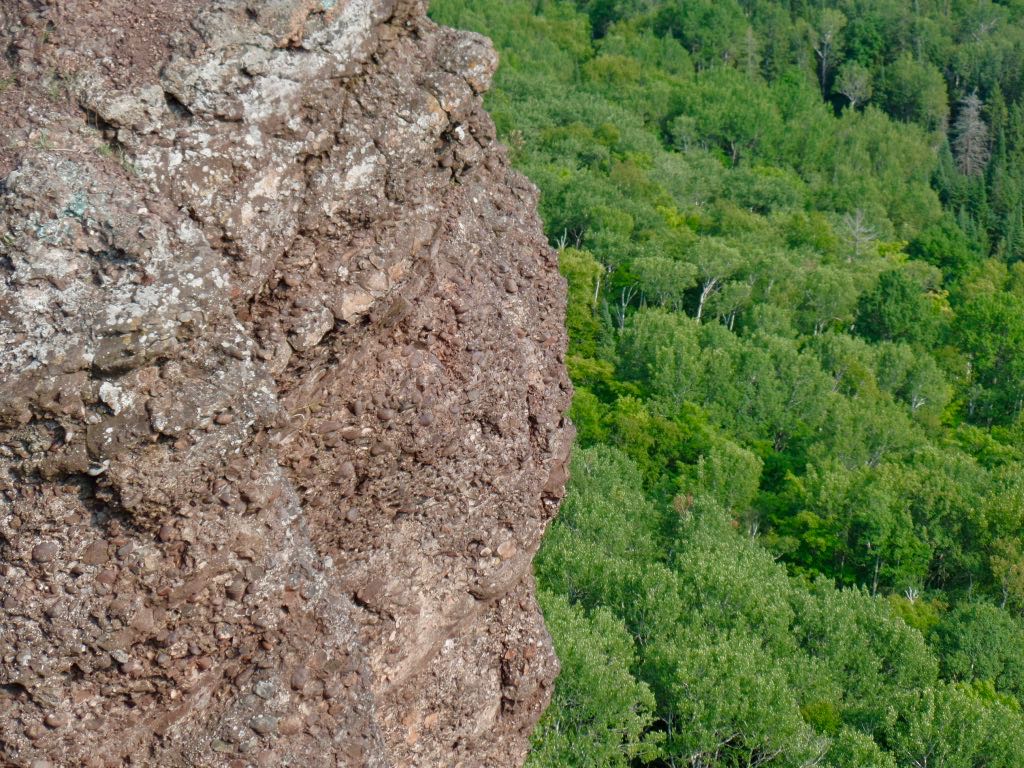 Here's a nice look at the side of the bluff. 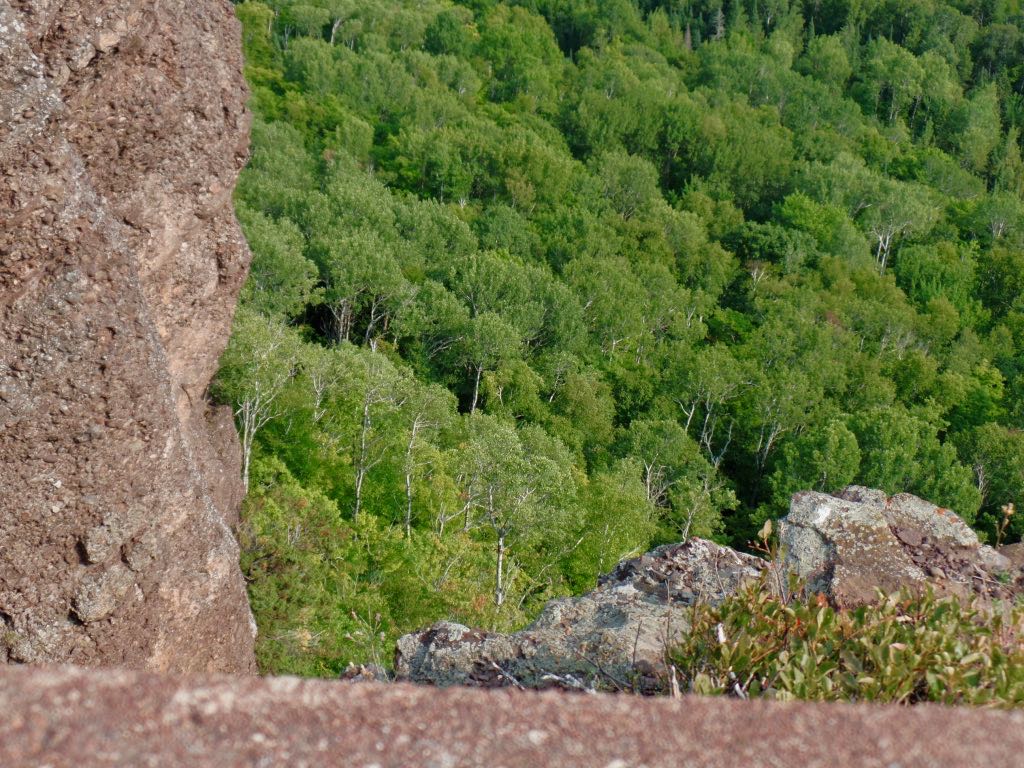 And peering down the side of the bluff to, at the bottom of the photograph, the protective wall at the end of that part of the overlook.

Currently Reading: The Men Who Loved Trains: The Story of Men Who Battled Greed to Save an Ailing Industry, Rush Loving Jr. It is so weird to hear the coal industry held up as the cash cow that will keep any railroad which serves it healthy. Seriously. Also it's amazing how many times railroad executives will say something in a cabin that turns out to be broadcast over the entire vehicle's intercom and that screws up something. OK, maybe this only happened three times, over a quarter-century, among a half-dozen significant railroads but still, it's a heck of a leitmotif.

PS: In Our Time podcast repeats episode on Carl Friedrich Gauss, a heads up to something I had nothing to do with creating, but that I did listen to.