Is the king of the world as far as I know

The Ann Arbor Art Fair has cancelled. We haven't gotten to it in years, it's true; it's usually been at too busy a time of year for us. But it was a chance to see the streets of Ann Arbor even more impassable than usual, this time with people showing off paintings, photographs, crafted projects, everything. It's the first time the fair's missed a year.

The fair was scheduled for the 16th through 19th of July. And this is getting ominous: the state's second-biggest pinball event of the year is Fremont's Baby Food Festival. That's so far still scheduled for the 22nd through 25th of July. I'm not confident that we're going to have big events like that again, that early, though. Heck, I'm not confident we're going to have the small monthly gatherings of the regular Fremont pinball stuff, and that's only gathering around twenty people.

Well, back to the stamp sand, and other features around Gay and another town in the area. 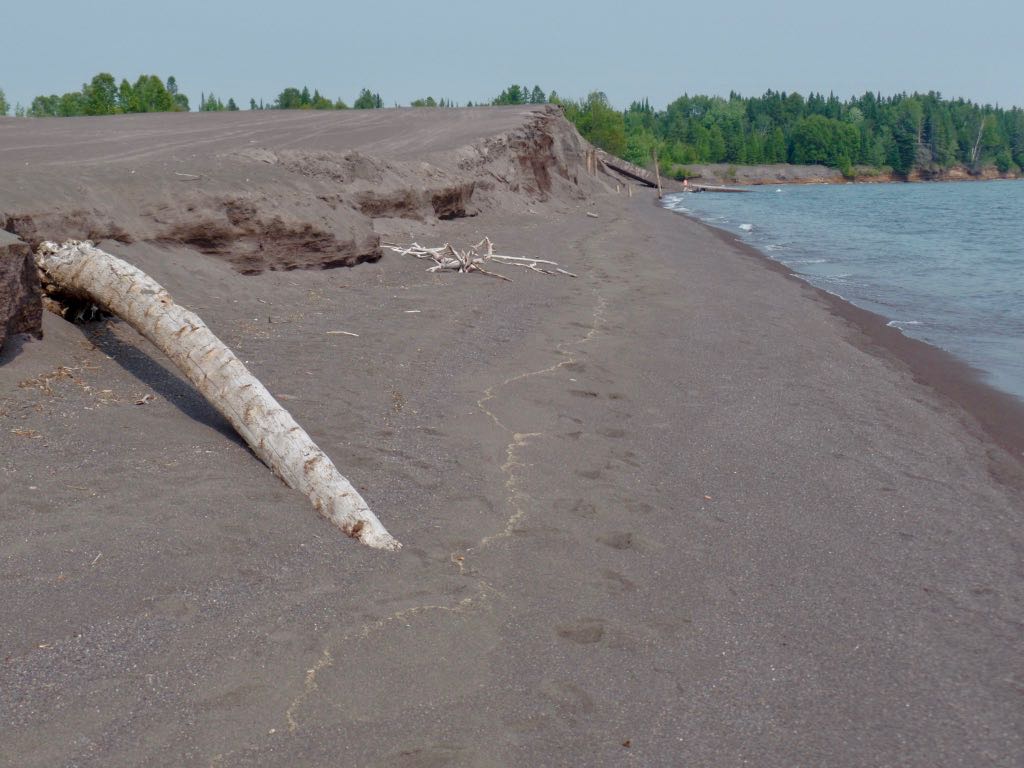 Looking from the shoreline back. I'm not sure whether this is a tree that washed ashore or something that, somehow, grew to substantial size in the sand before shoreline erosion caught it. 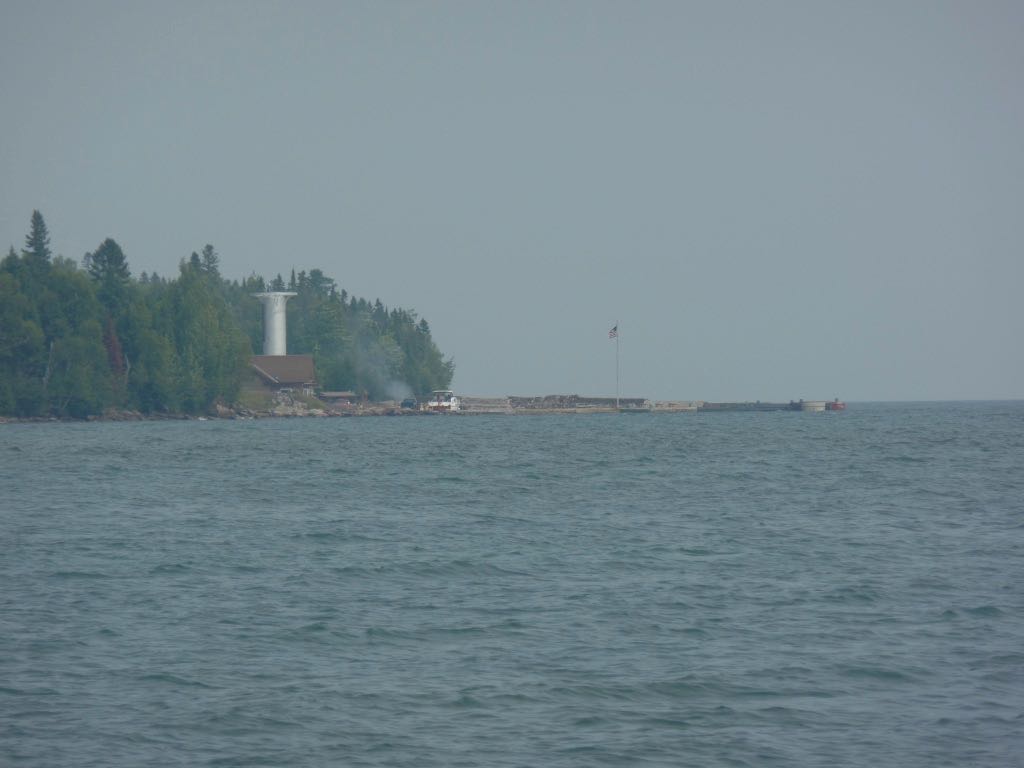 Looking at a dock to the northeast of the stamp sand beach. Someone's grilling or else their car is on fire. 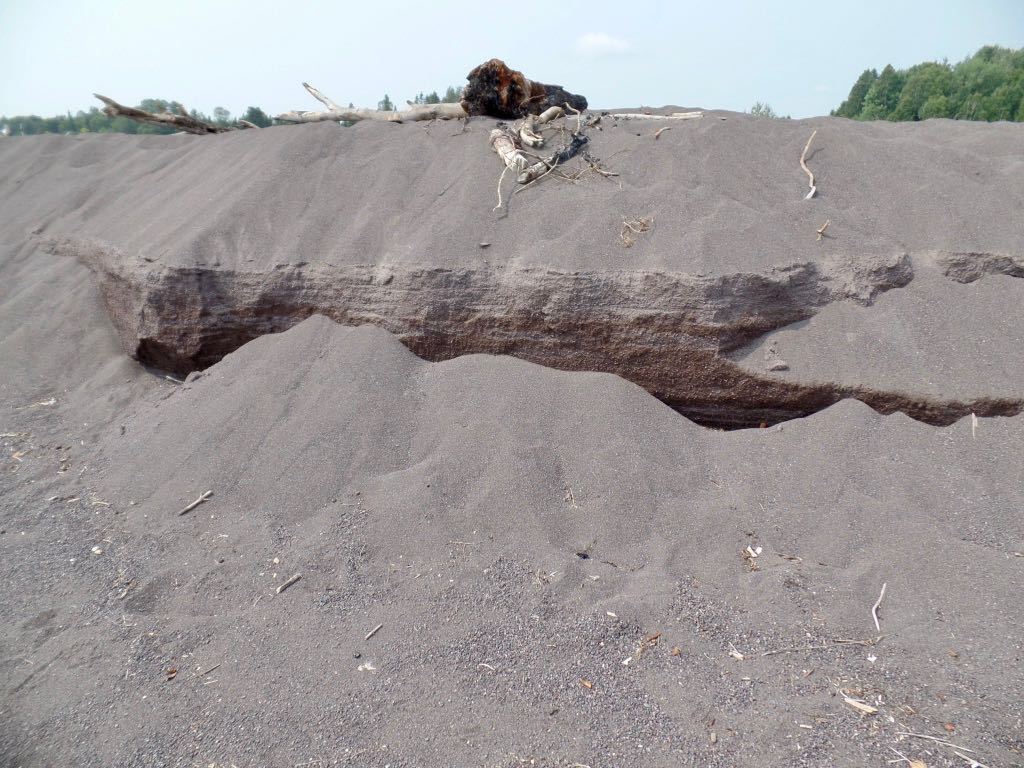 The erosion of the stamp sand beach produces this great cliff-face look. It even has an imitation of sediment layers. Maybe it's actual sediment layers reflecting times they used different veins' ore. 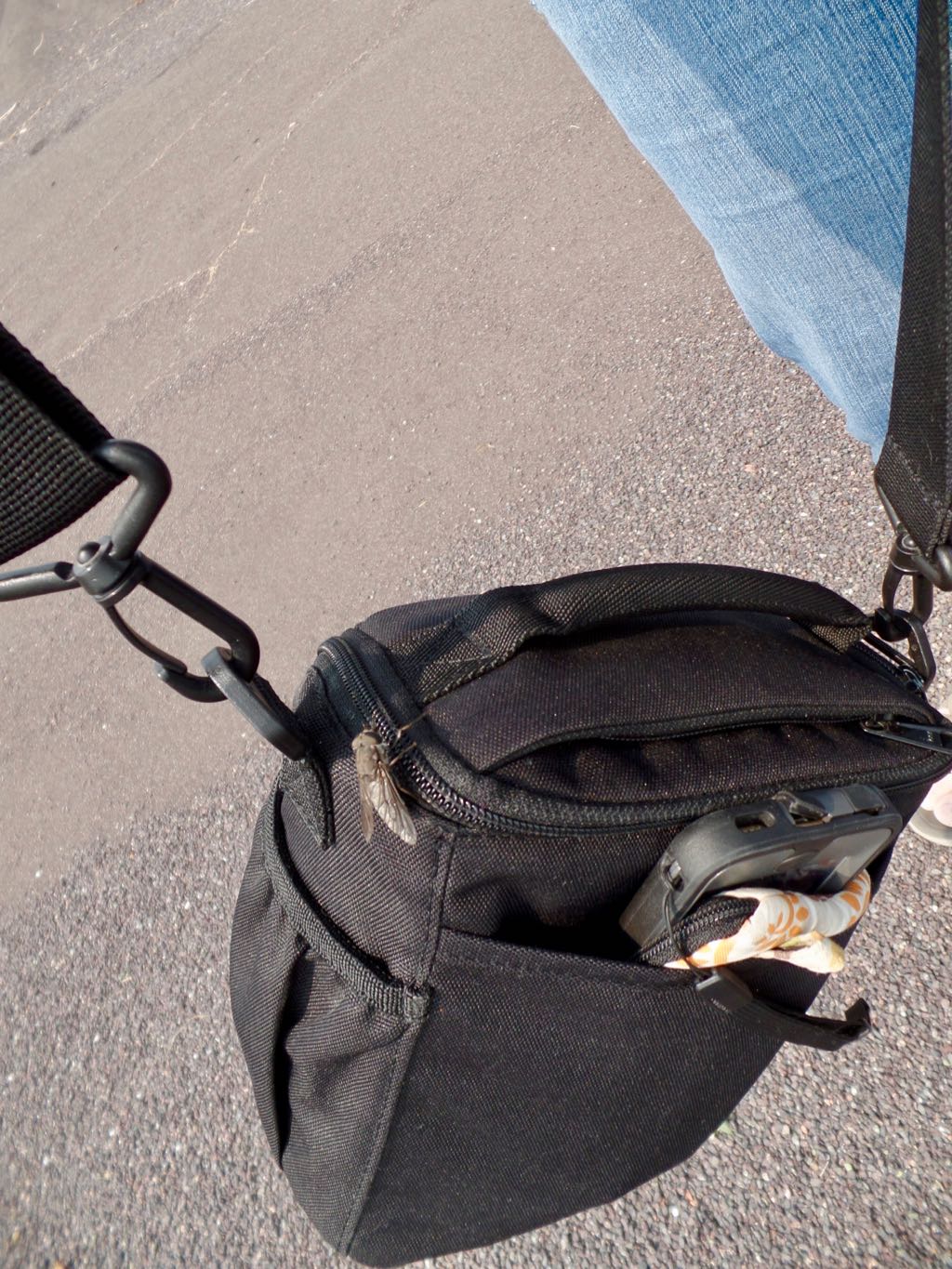 Oh, another of those big bug friends hopped a ride on 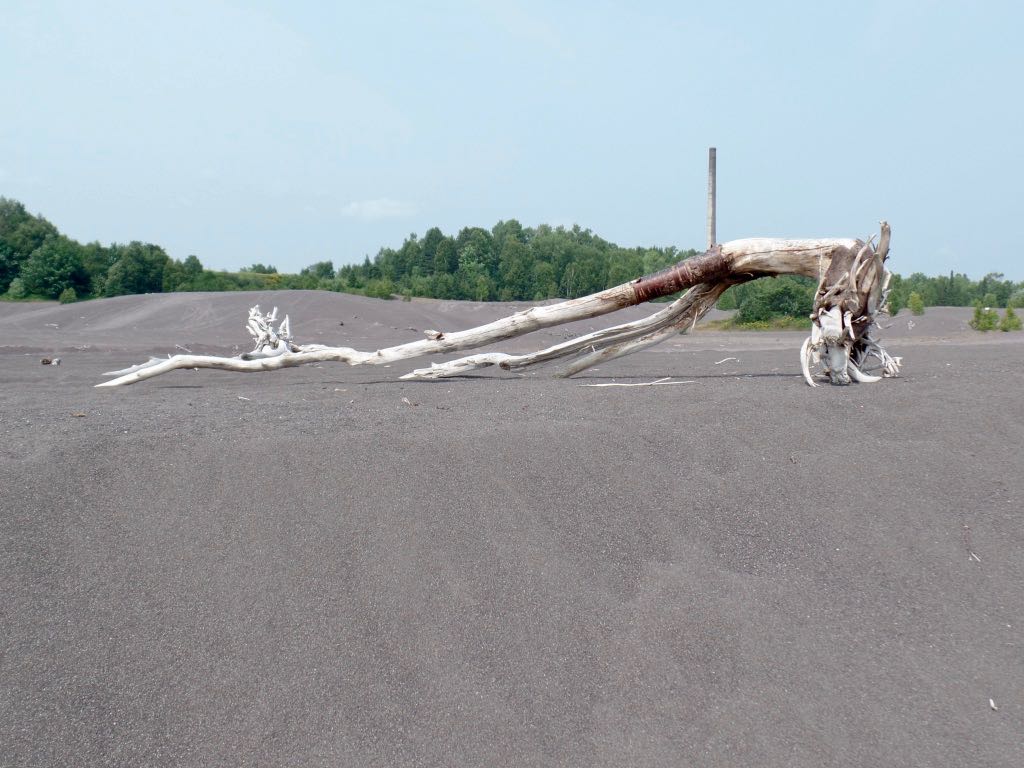 A broken-down tree poses for the cover of my album. It really looks like a deer with antlers on the left there. Compare to

bunny_hugger's version of this scene. 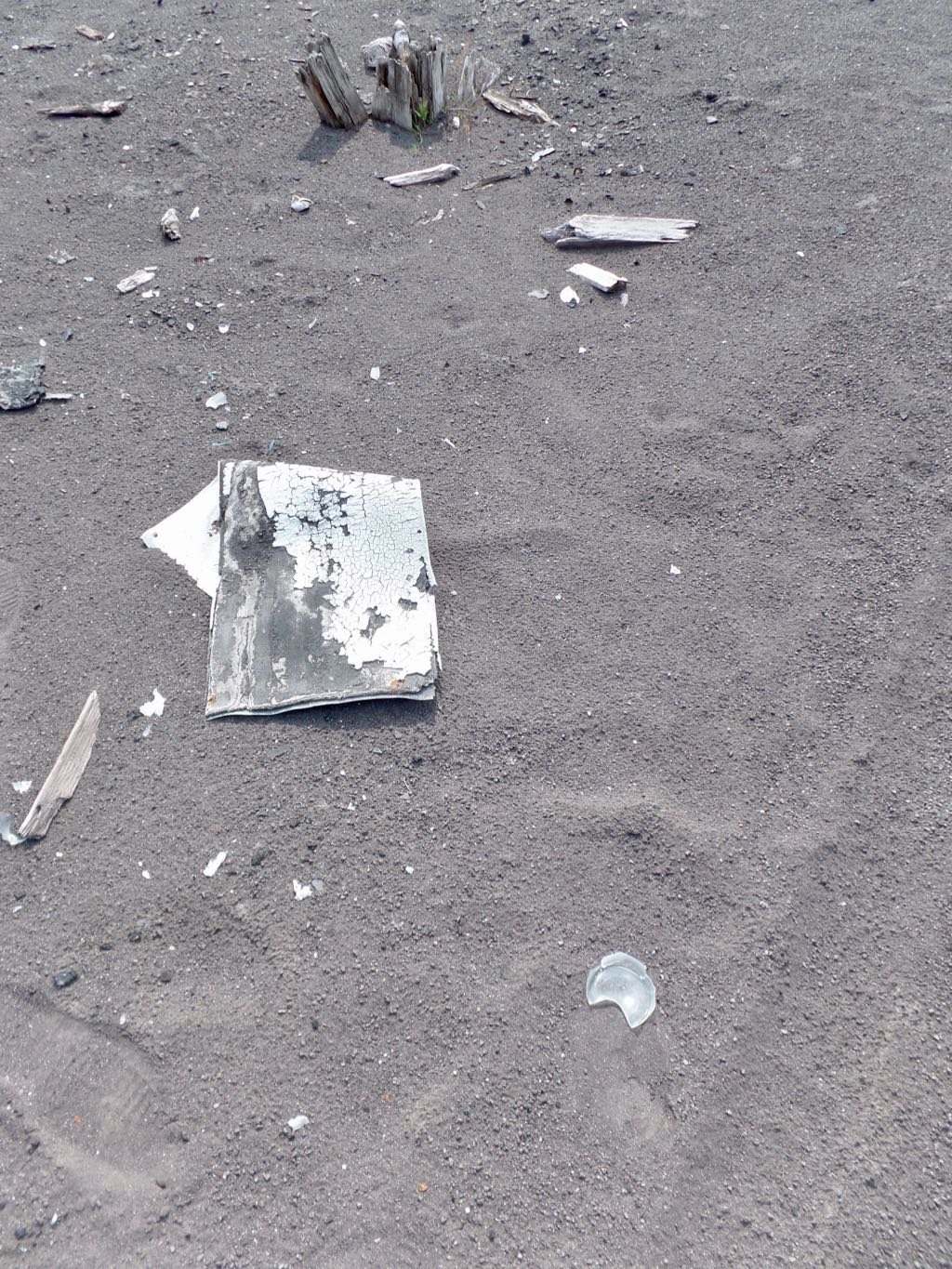 You'd think that sea glass (well, lake glass) would be easy to spot on the beach given how uniform and grey the sand is. It wasn't, though. The most glass we saw was here, with what looked like a shattered mason jar, lower right. It seemed more like the remains of a picnic or drinking party than anything else. 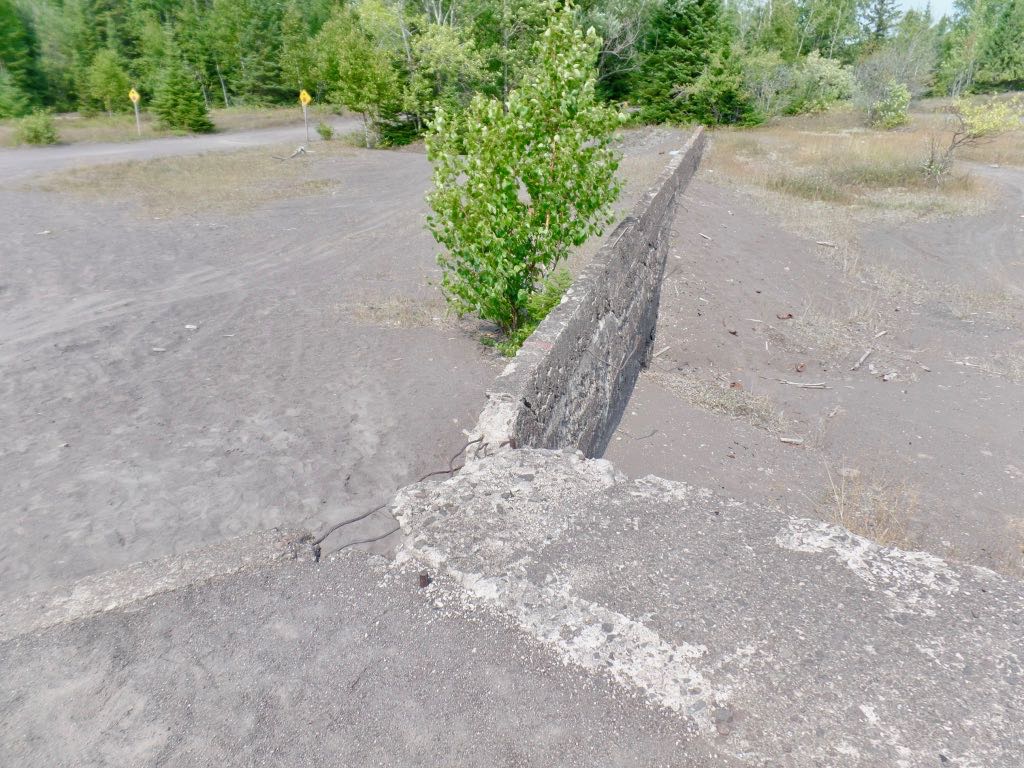 There are a couple of retaining walls along the stamp sand beach, which probably had significance to the factory at some point. Now they just make the topography more interesting. 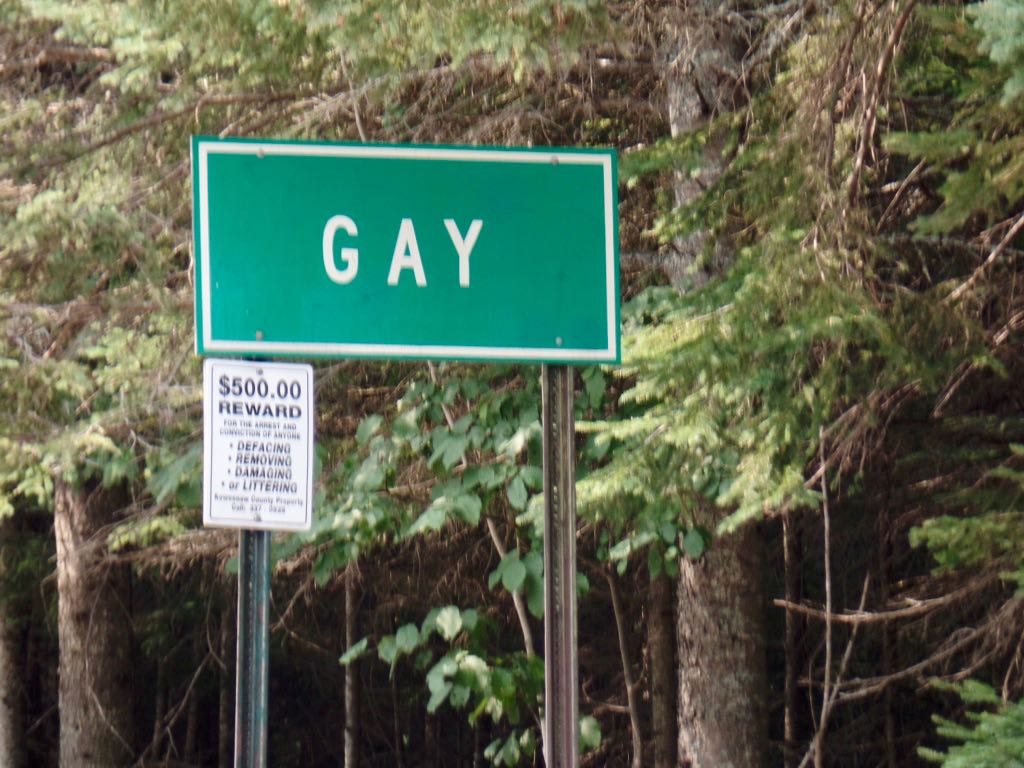 Town sign, and what sure looks like an exhausted sign warning to not steal the thing. It's also a fair bit higher than most town-identifying signs are. 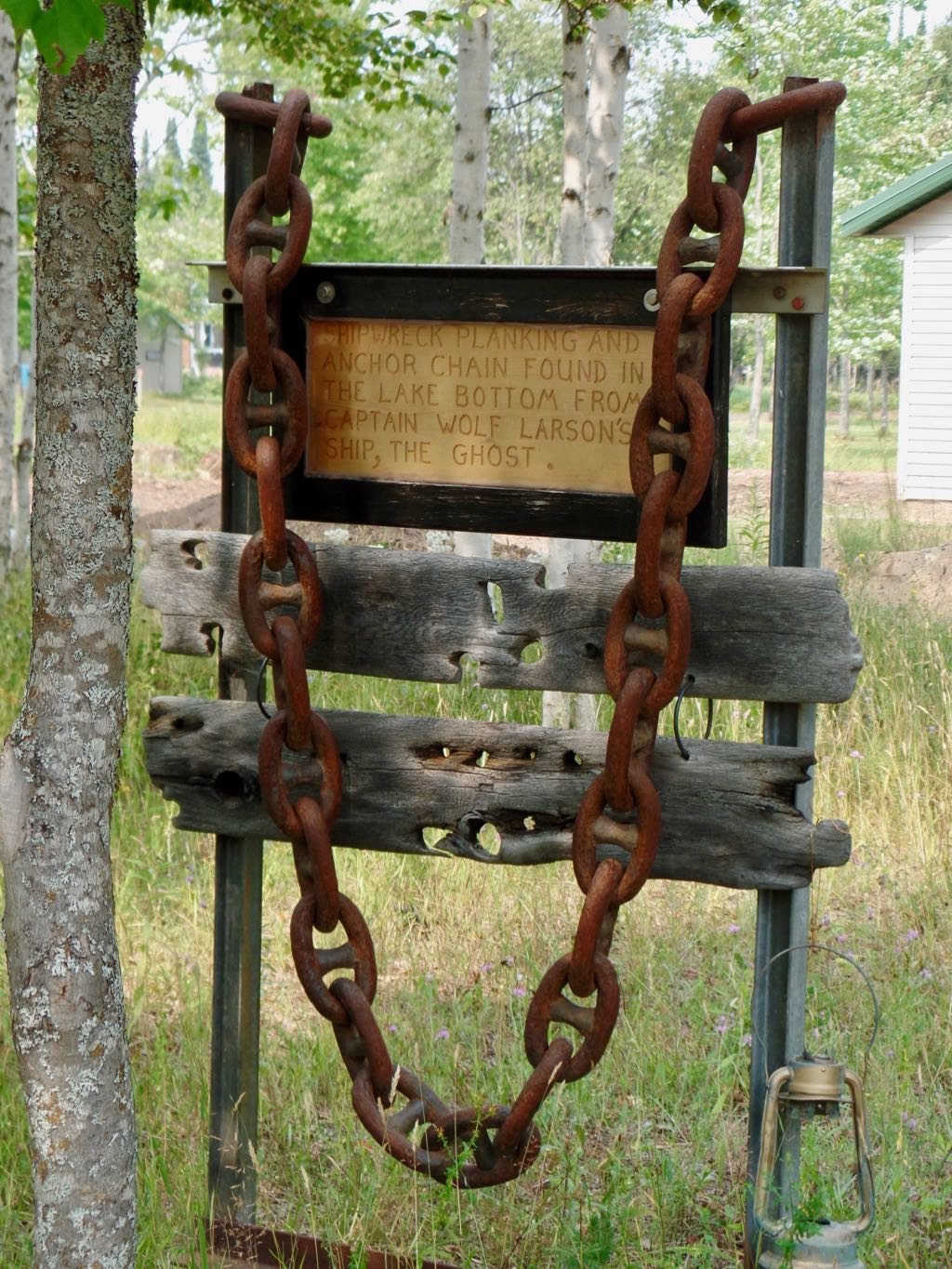 One of the houses has set up a couple miscellaneous historic artifacts, like this, ``Shipwreck planking and anchor chain found in the lake bottom from Captain Wolf Larson's ship, The Ghost''. Also, ``Captain Wolf Larson of The Ghost'' sounds like the hero of some 1930s serial adventure comic. 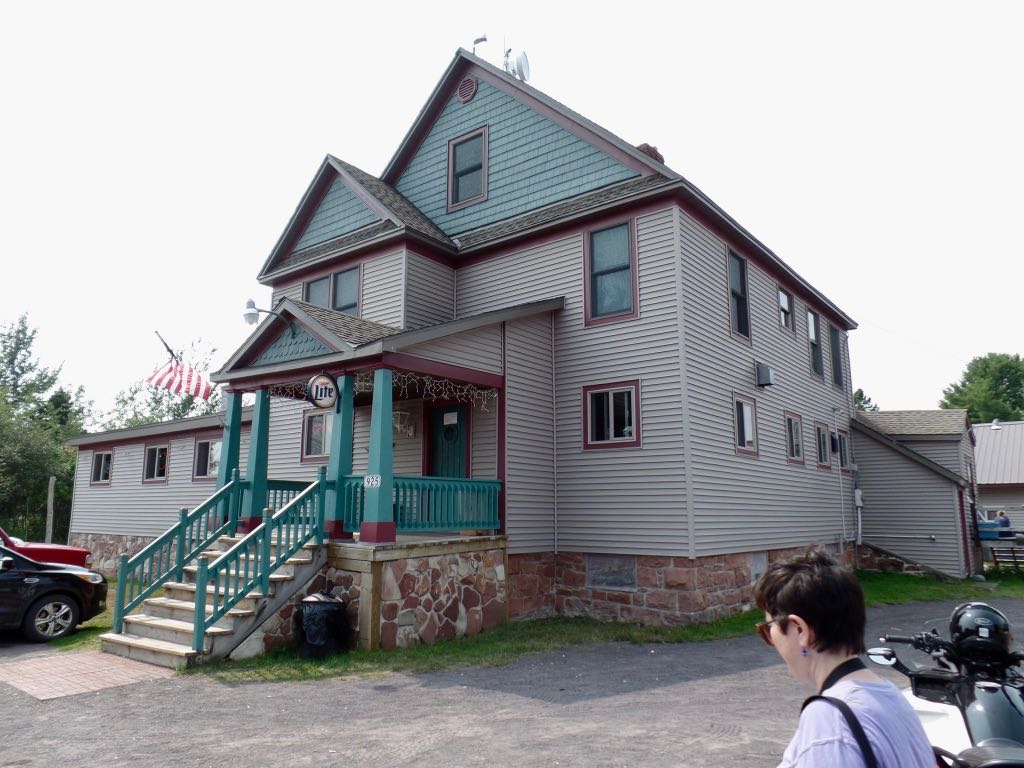 And so here is the civic institution that you knew had to be there. Do you want to say what it is? Go ahead, I'll wait. 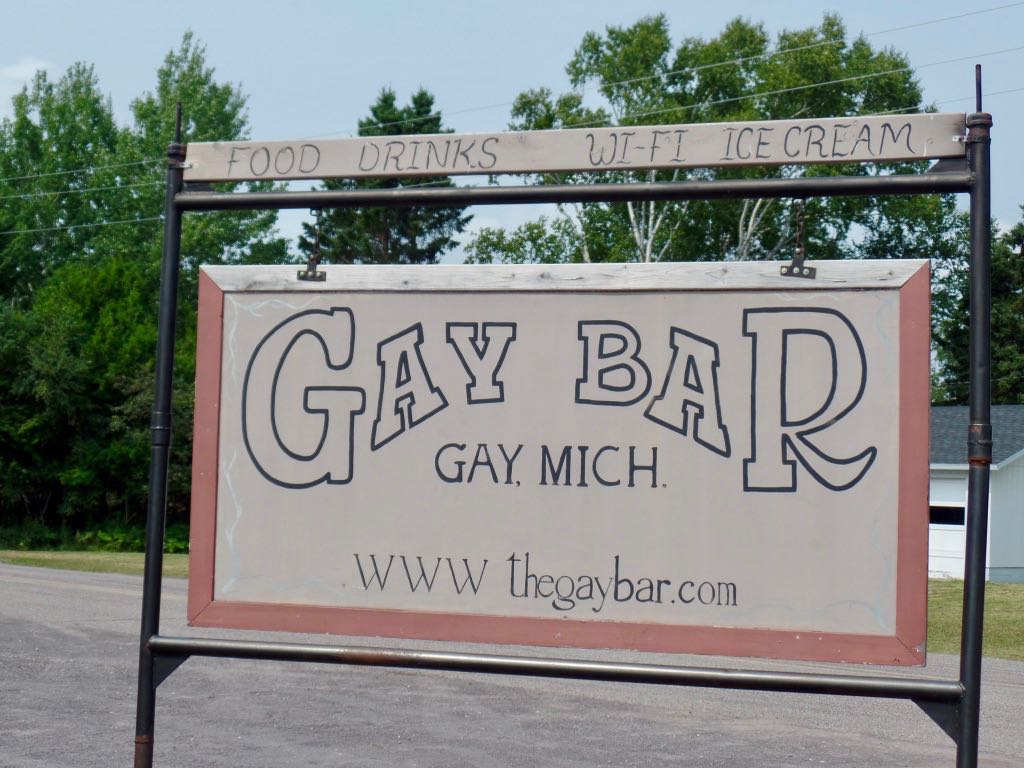 Correct: it is the Gay Bar. Which is your normal sort of town/neighborhood bar, except that it sells a greater variety of merchandise than, like, Stober's in Lansing does. 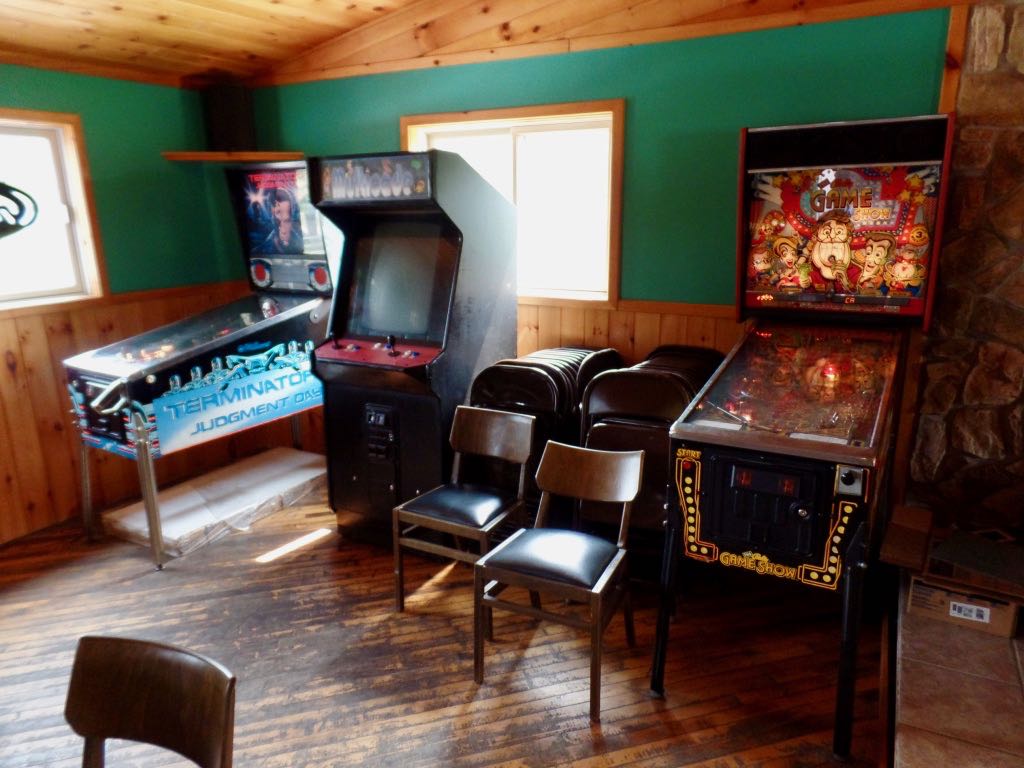 And inside we found pinball! The Game Show pinball is a great and favorite one, but, it had an extra pinball inside so the game kept insisting we plunge two balls into play, then ended the turn when the first ball drained. By plunging the right way you could put one ball into play and have more or less the correct game experience. The Terminator 2 was in good shape except that the screen was off, so we had no idea our scores. The sound was turned up to register at 5.2 on the Richter scale, so at least we could hear game instructions and didn't have to rely on display cues. 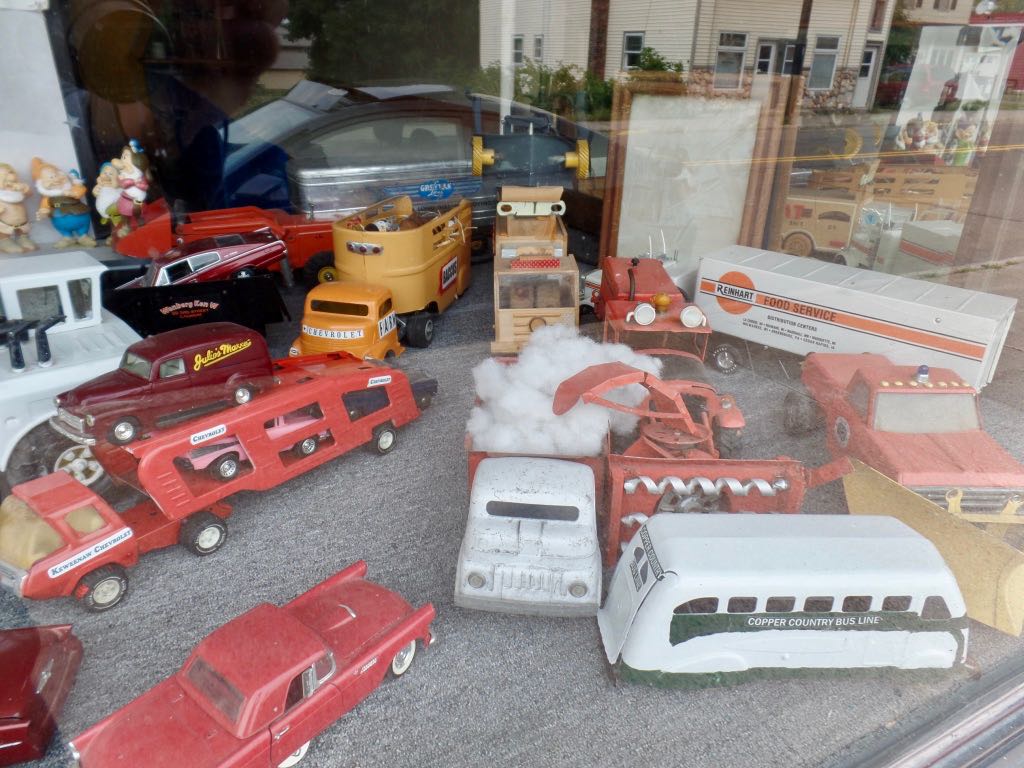 Having seen the sights of Gay, we drove to nearby Lake Linden, which had closed for the day because it was like 5 pm on a Sunday already. Here, though, is a window display in town. 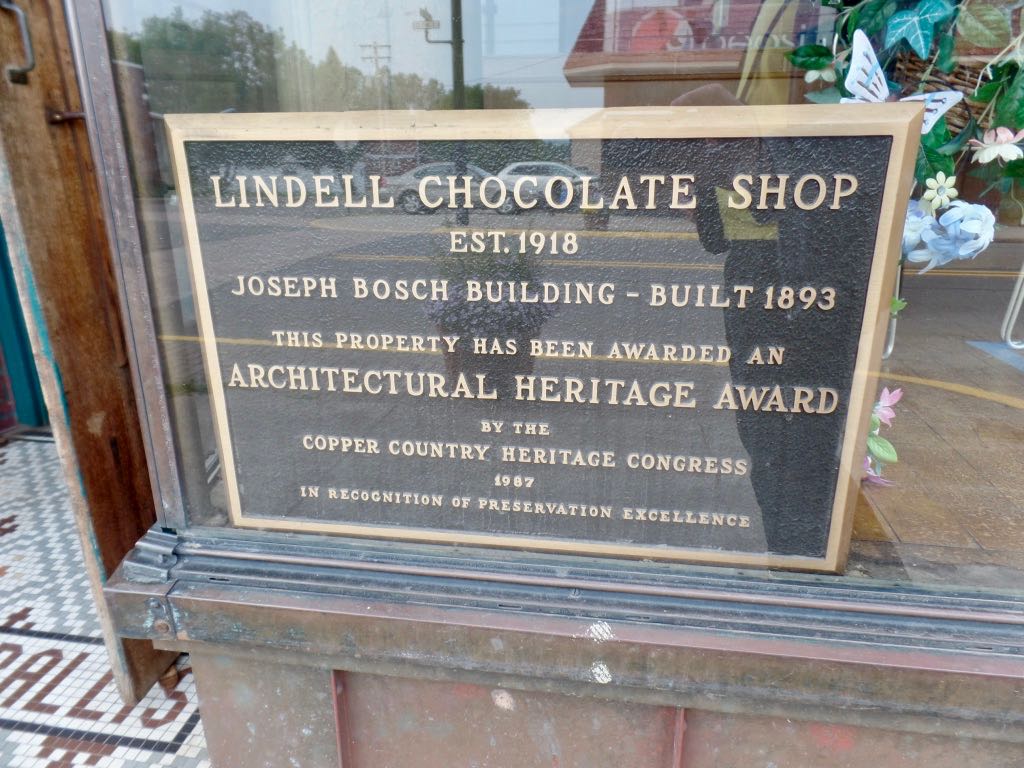 The Lindell chocolate shop, you can see, is noteworthy because it was a hundred years old and while the shop has been through different phases, like pharmacist's and lunch counter, it's always been someplace where you could buy candy. 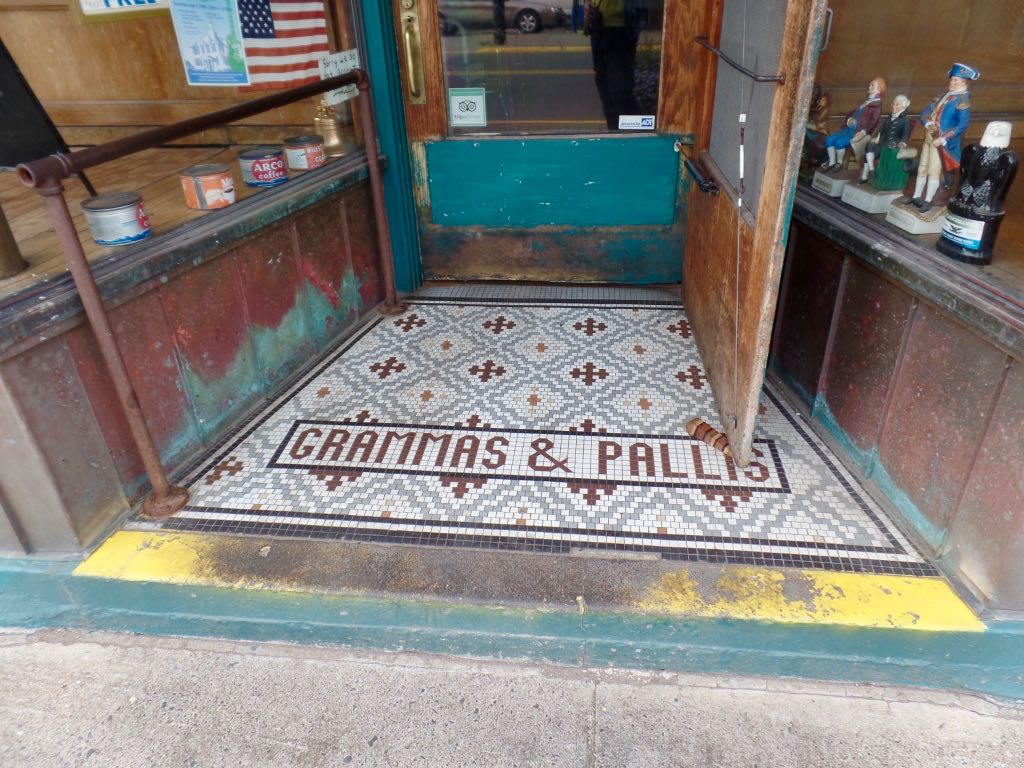 The great tile curtain in front of the store. I miss this sort of inset entrance, not least because it gives you half a chance to bundle up before heading out into the weather. 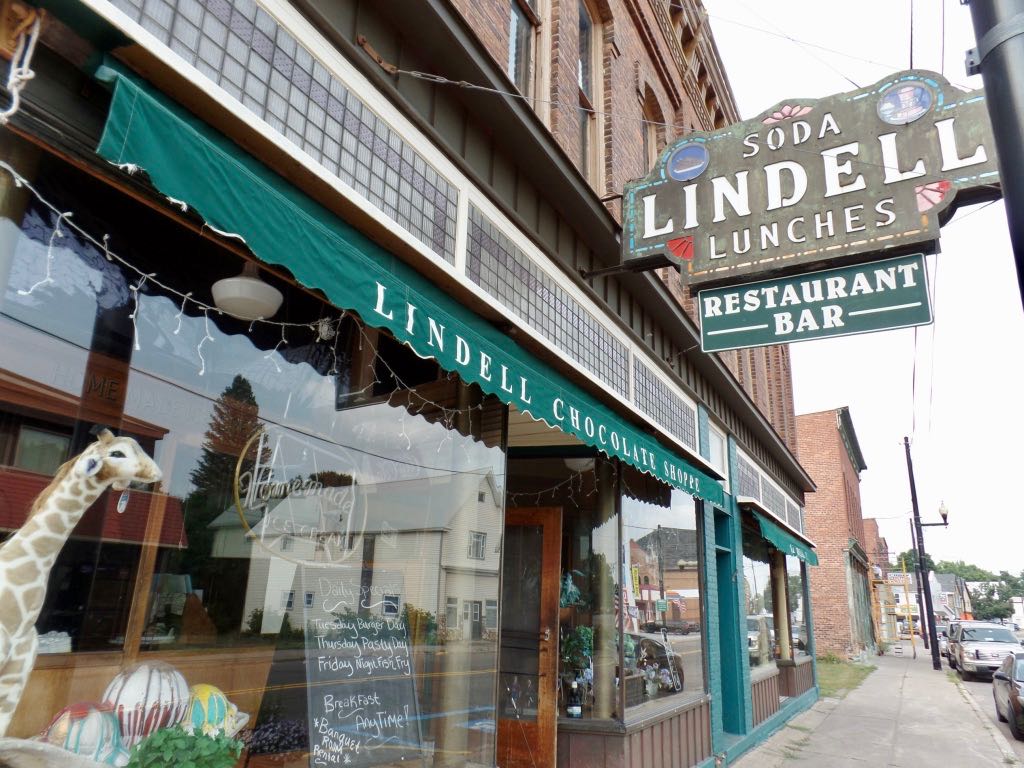 And here's the place, and a view of town. We'd long missed lunch, unfortunately, and even if we hadn't, we'd missed pasty day.

Trivia: Holy Roman Emperor Otto II died in 983, at the age of 28, from a fever and an overdose of medicine (four drachms of aloe) to treat it. Source: A History of Venice, John Julius Norwich.

Currently Reading: Miscellaneous Harvey, Marvel, and other comics. This includes ones I had bought in recent years figuring to get around to reading and hadn't before. Also includes a recent reprint of some Bud Sagendorf Popeye comic-book stories, which are interesting. Sagendorf's daily Popeye strips would usually come up with a pretty good premise, shuffle it around some until he got bored with it, and then end with the most anticlimactic moment possible. But in comic book form? ... He ... gets to a disappointing ending sooner, but it reads mostly better somehow. Except that the first of the stories here requires Wimpy to be working implausibly hard at his scheme.