And the hair upon the wire

If things were different, today would have been the close of the Lansing Pinball League Season 14.

bunny_hugger, sent to the second-chance bracket by, I'm thinking, PAT taking her to Batman 66. I don't know how that would play out. Against her I'd certainly try to pick Willy Wonka or Grauniads of the Galaxy, both of which she might beat me on, but I'd have the advantage. Depends on whether the tables were free, though. She'd be upset at having to pick a game against me, but if she went to Indiana Jones, Junkyard, or Beatles she could beat me. She'd probably take me to Scared Stiff, which would put us about even, but she likes the game and I always advise her to pick the game she enjoys playing.

Whichever one of us won I could see making it to one of the trophy positions. Would have to beat, mm, probably JAB.

bunny_hugger thinks that JAB always creams her, although their track record is actually perfectly tied. If it were MAG that we played here, well, he'd win that, although I think he'd fall short of winning the league. Either DMC or MWS would go on to take first place, and the other would get second place.

We'd give out the remaining stock of Loser ribbons to the people attending who didn't have one already, and remind people about the Super-Ball split-flipper tournament in two weeks. It would be somewhere around midnight by the time all this wrapped up. Maybe after midnight.

bunny_hugger would feel bad about her finish, however good it was. I'd try ineptly to reassure her that she deserves her spot as the best competitive-female pinball player in Michigan, and that everyone who isn't a woman-hater to start with agrees. It wouldn't work well, but the fifteen-minute appearance by a HMZ apparently too drunk to be playing Medieval Madness like he was would make her day, and help her feel a little better. We'd go home just before the bar closed out the night. But

bunny_hugger would curse herself for not having finished every last bit of grade-keeping before going to bed, and would have to stay up even after I'd eaten cheese and crackers and gone to bed. She'd finish the grade-recording about 5 am and fall asleep, telling me to make sure she formally submits the grades before the close of business. I'd promise to do that, but she'd remember and do it while making lunch Wednesday morning.

All that, anyway, if things were different.

We take in the evening at White City, formerly an amusement park, in Keweenaw back in 2018. 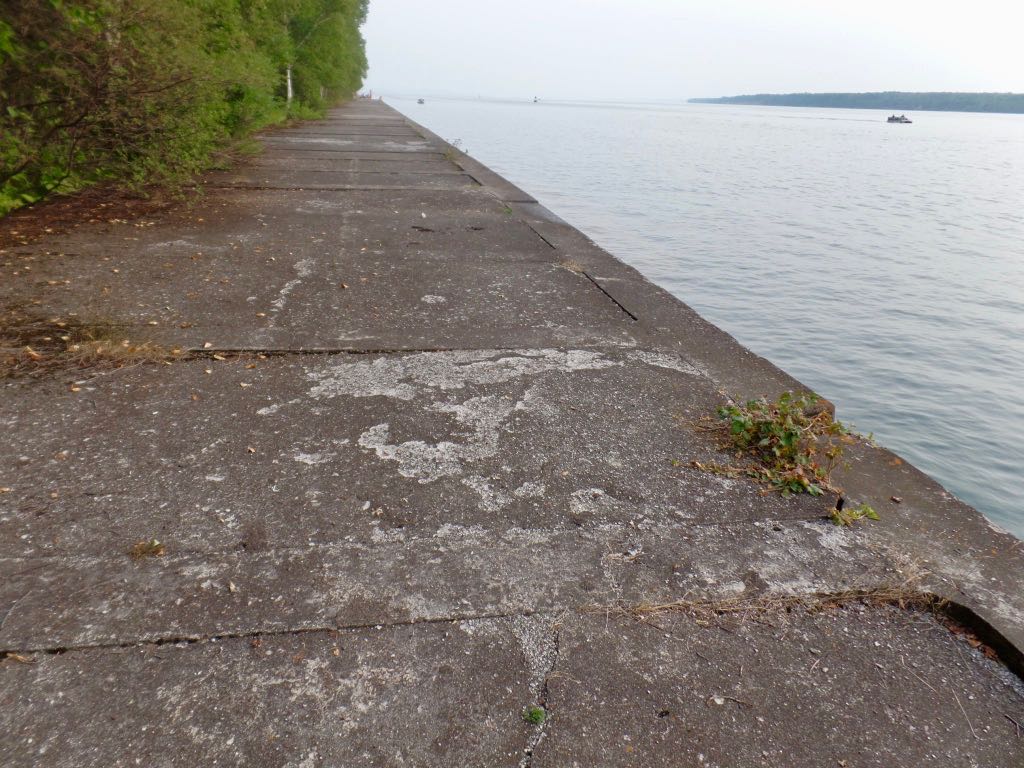 Walking along the breakfront, along the Keweenaw Waterways and the path that would let us sail back to Houghton if we were only boats. The lighthouse is still way, way off in the center of the picture, though. 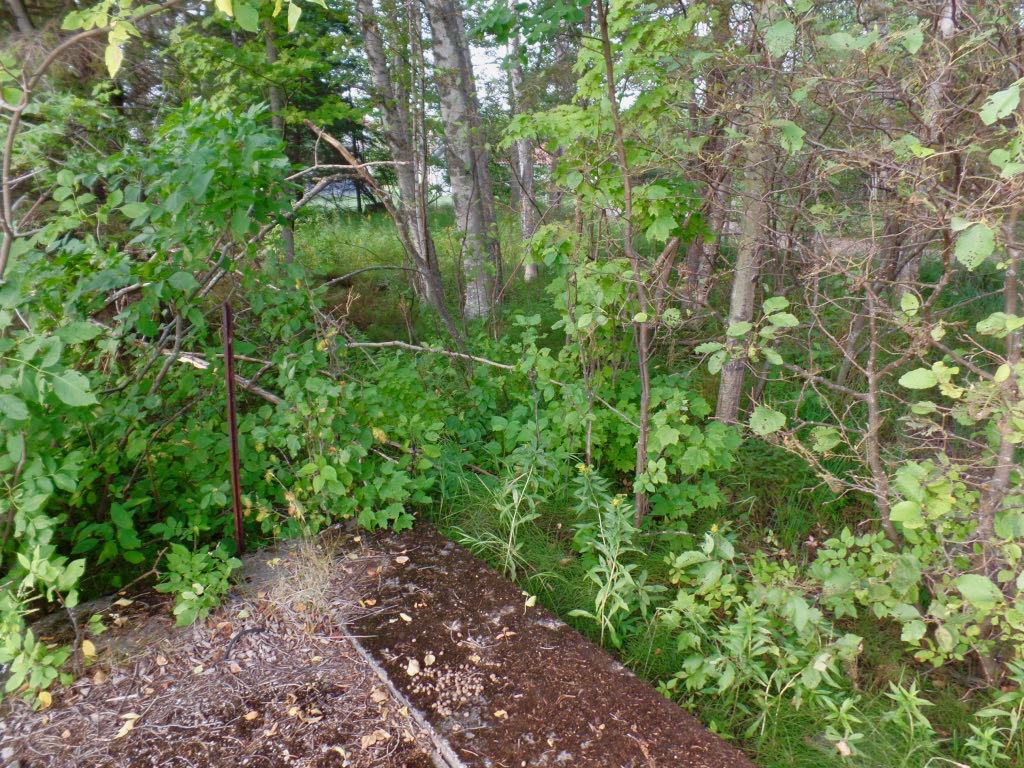 We were in part looking for a letterbox that we didn't find. I don't think we even got through half the directions. The old concrete and rusted metal suggest something that used to be a something, although if it were amusement park-related I would be quite surprise.d 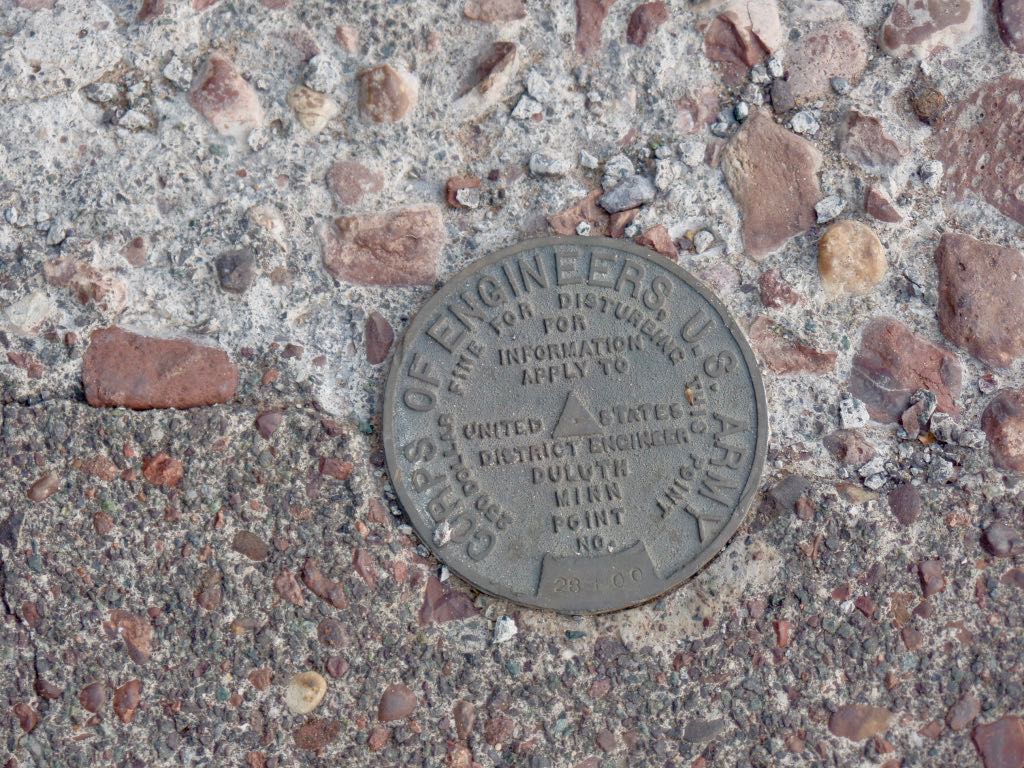 Do you suppose the fine for disturbing this point is still the $230 molded into it? 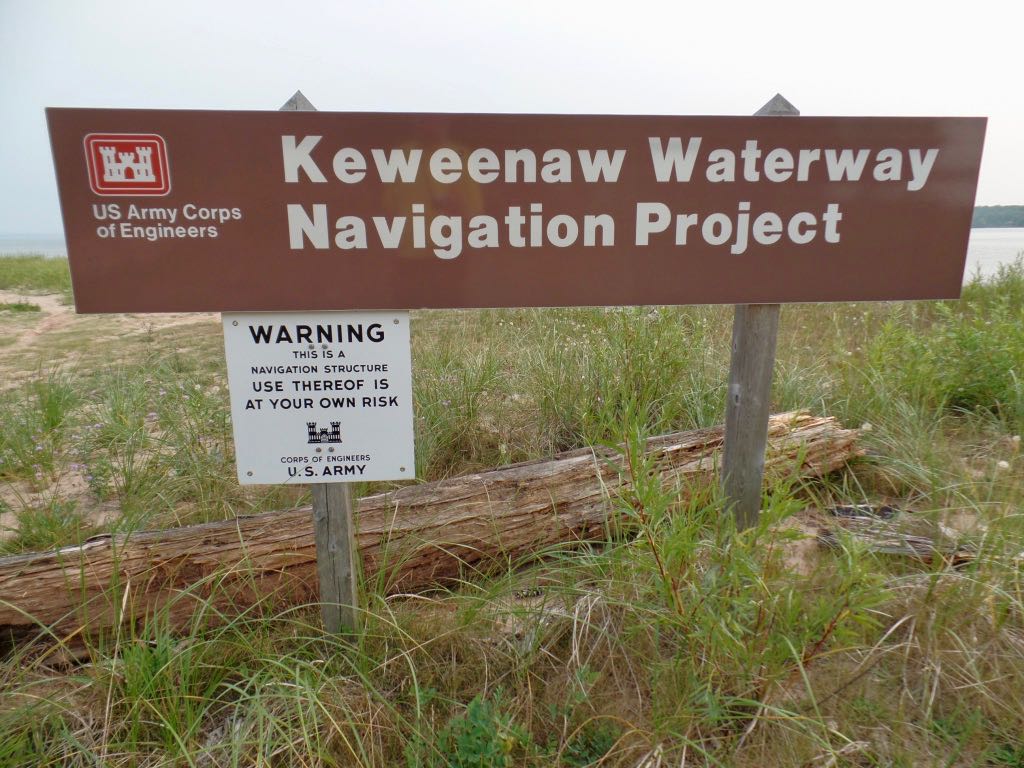 I enjoy the sort of old-fashioned legalese of the warning about this navigation structure. 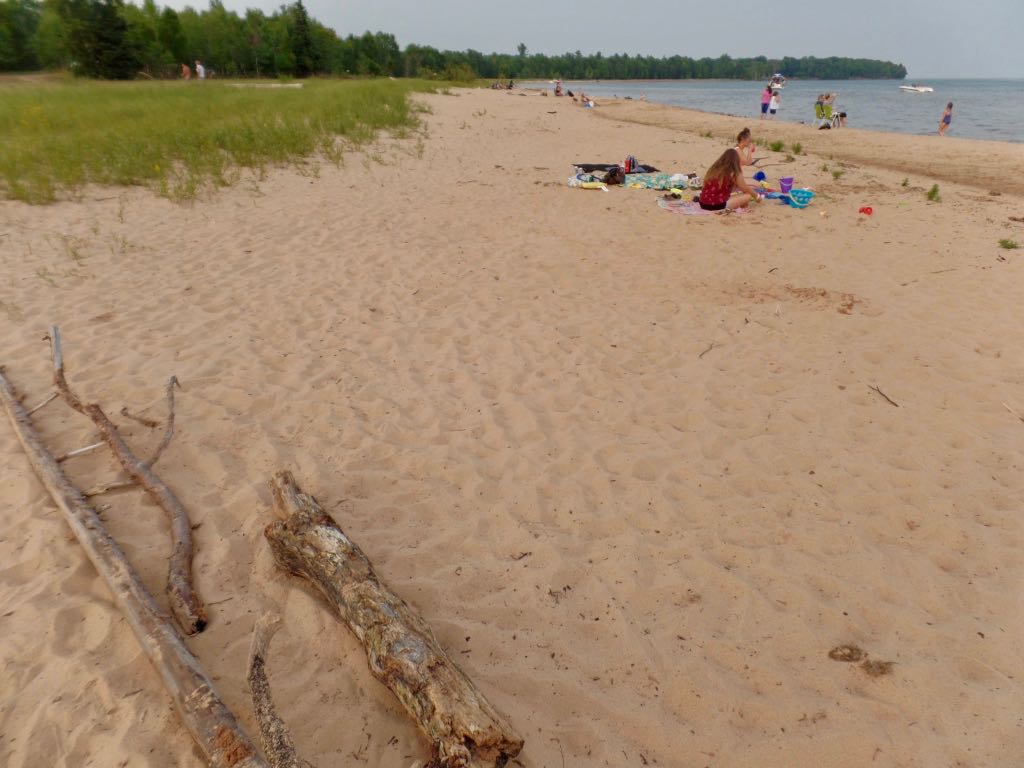 To the beach! It wasn't a packed evening but it was busy enough. 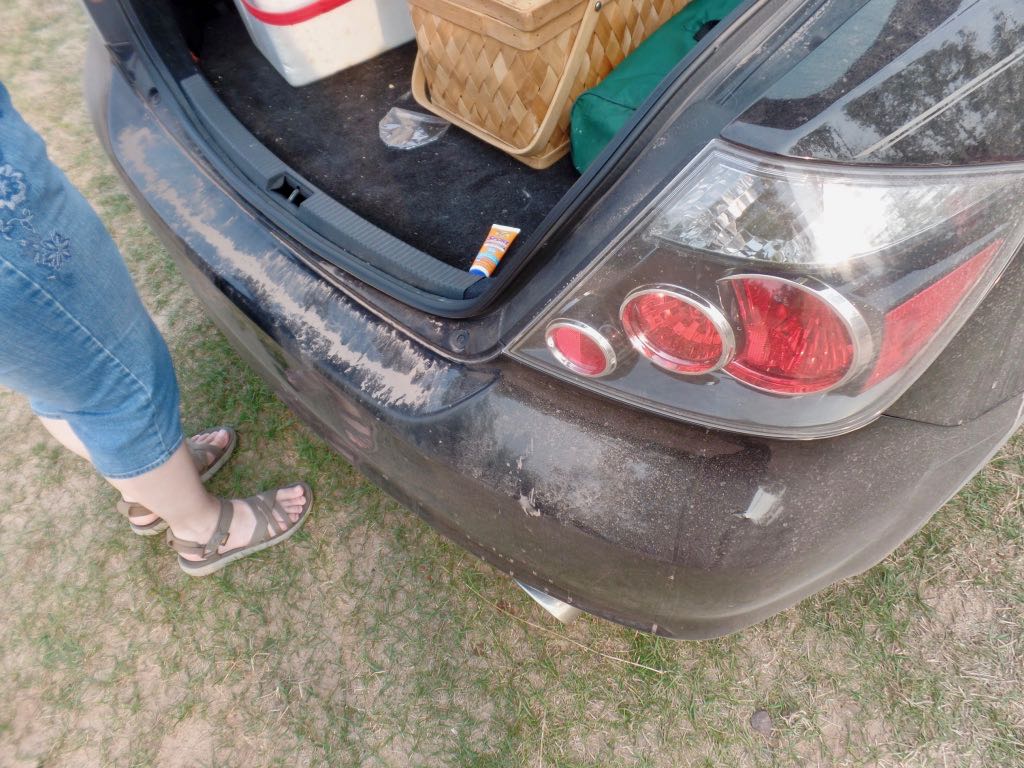 We'd brought a picnic and beach stuff. Here, too, you can see how the Keweenaw Dust had covered my car. I am still getting it out of my car, nearly two years later. 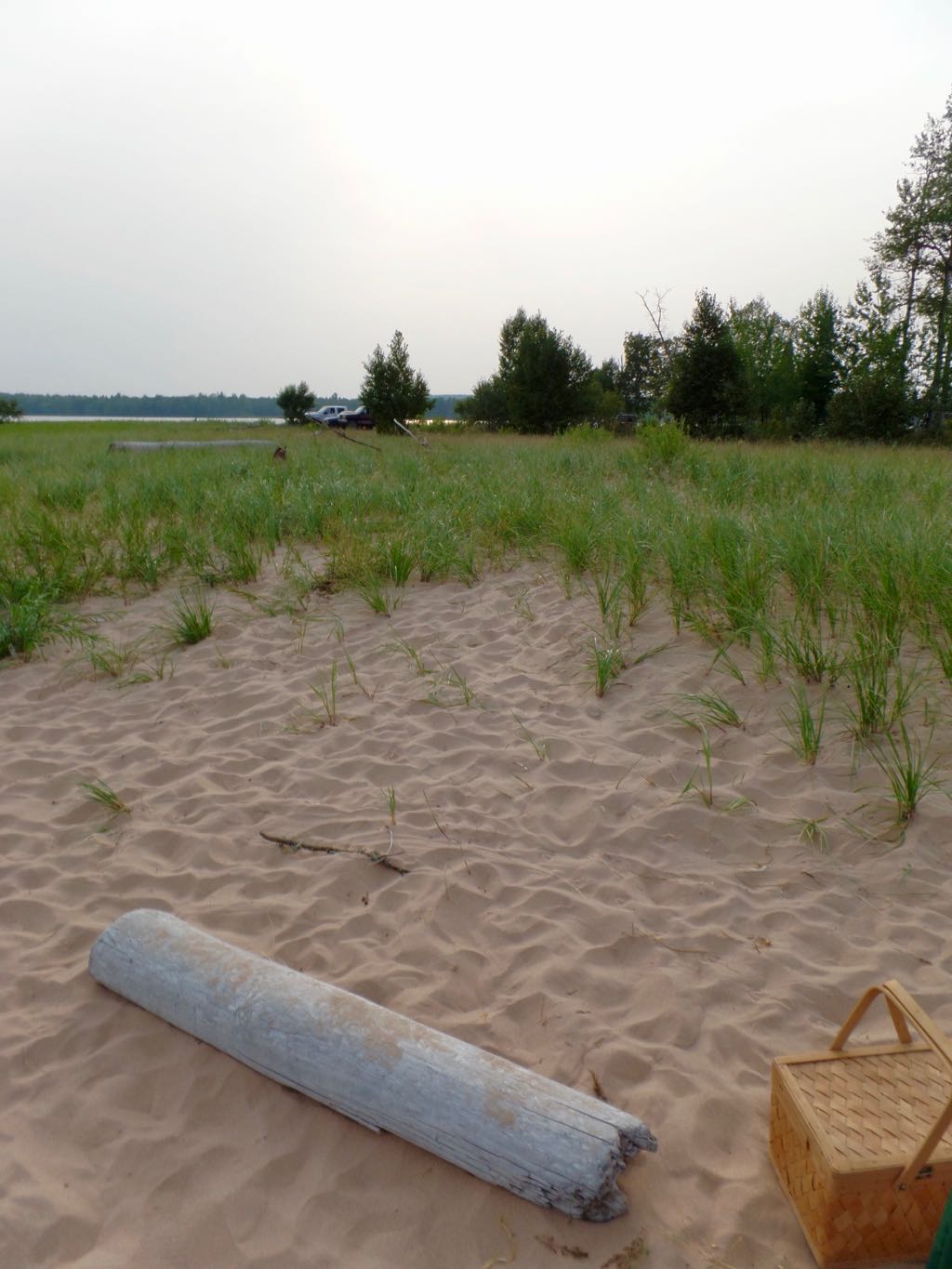 So you see those cars way off in the distance? One of them had speakers set up and was playing Kiss loud enough we could still hear it from this far away. 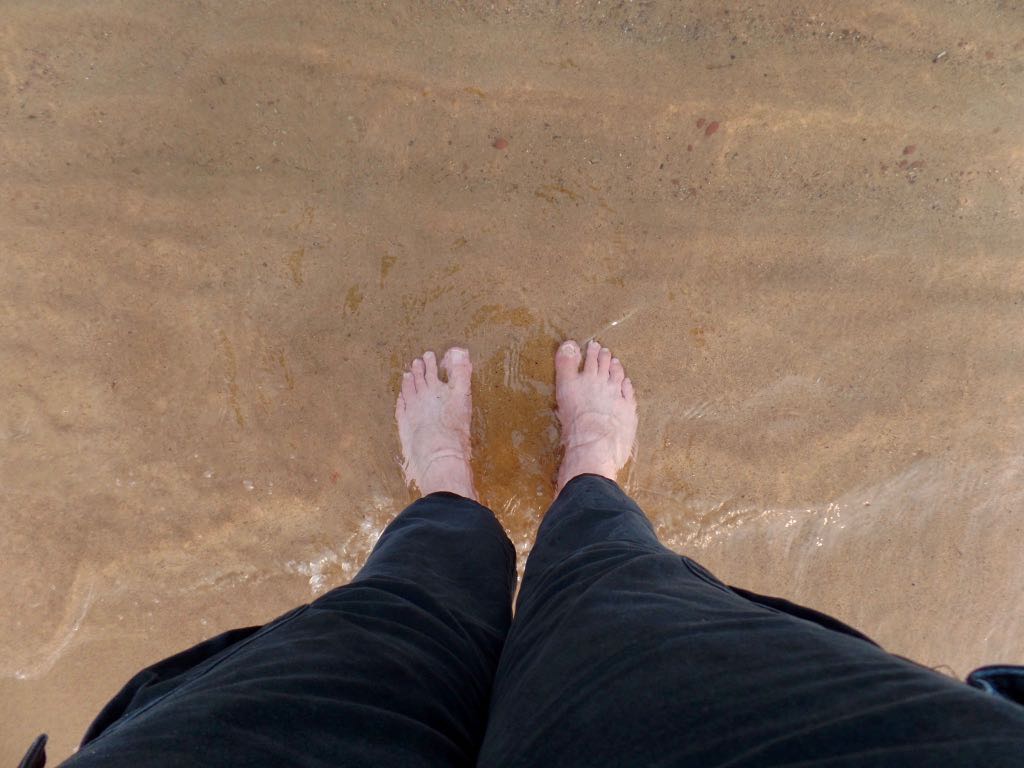 I dip my toes into the Lake Superior water! It was a bit cold for me to go swimming, though. Anyway, here's my album cover for this set. 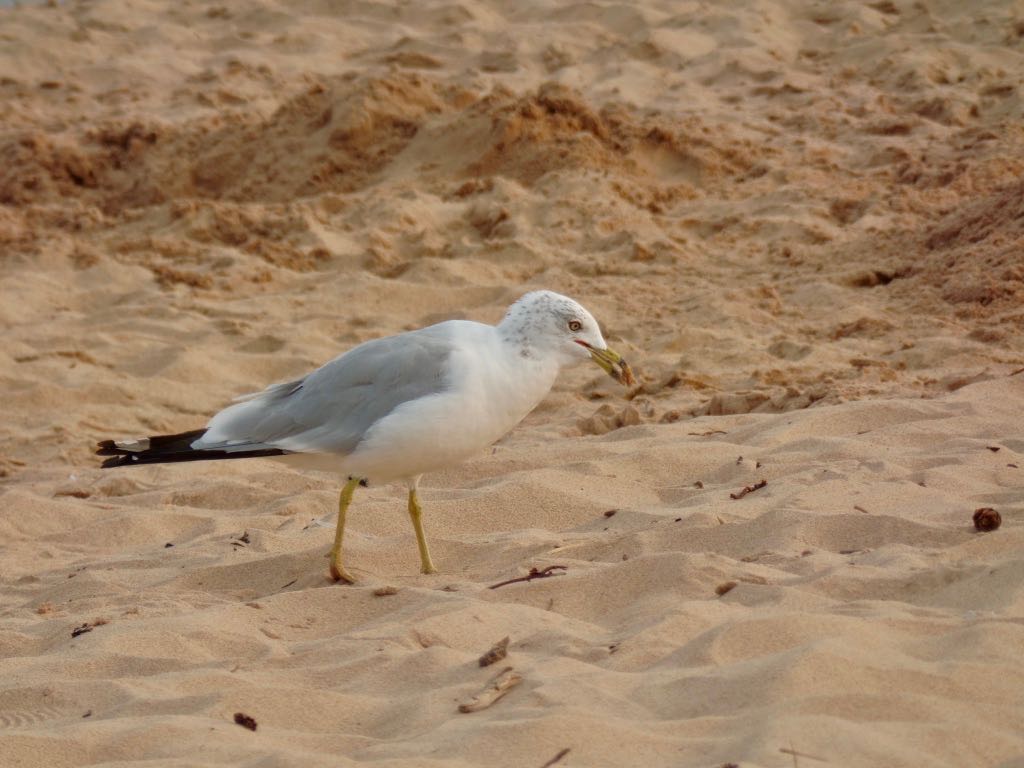 Jonathan Livingston prowls around looking for a little break, guys, c'mon, give him a chance. 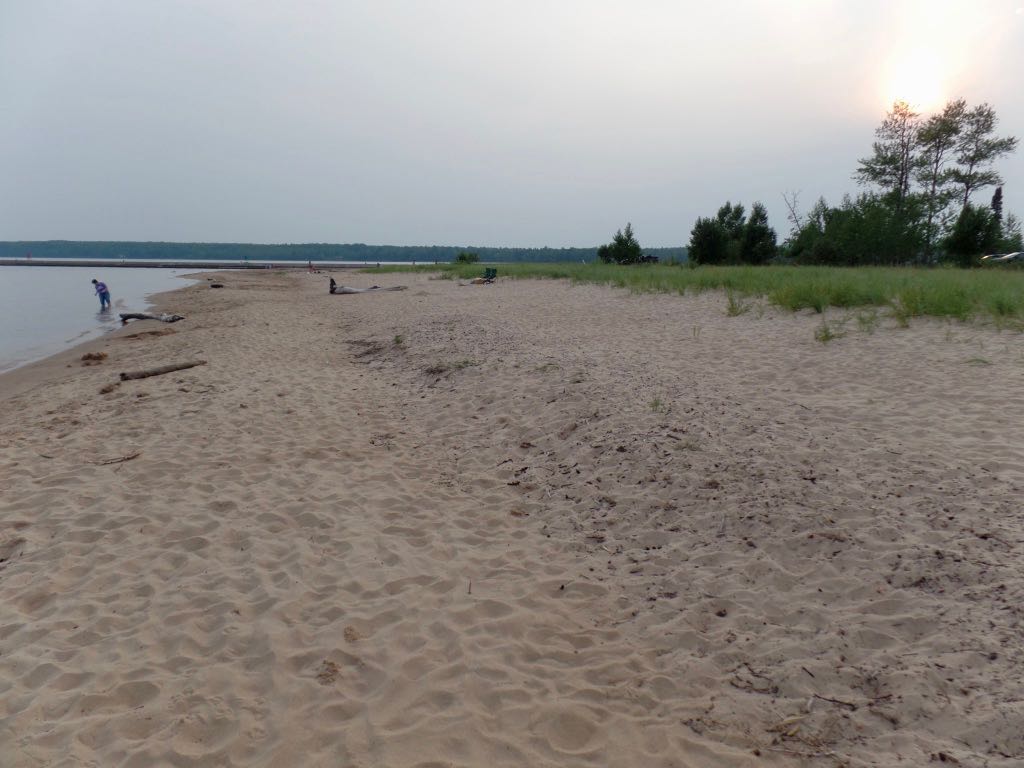 The sun working on setting behind the Keweenaw Waterway. 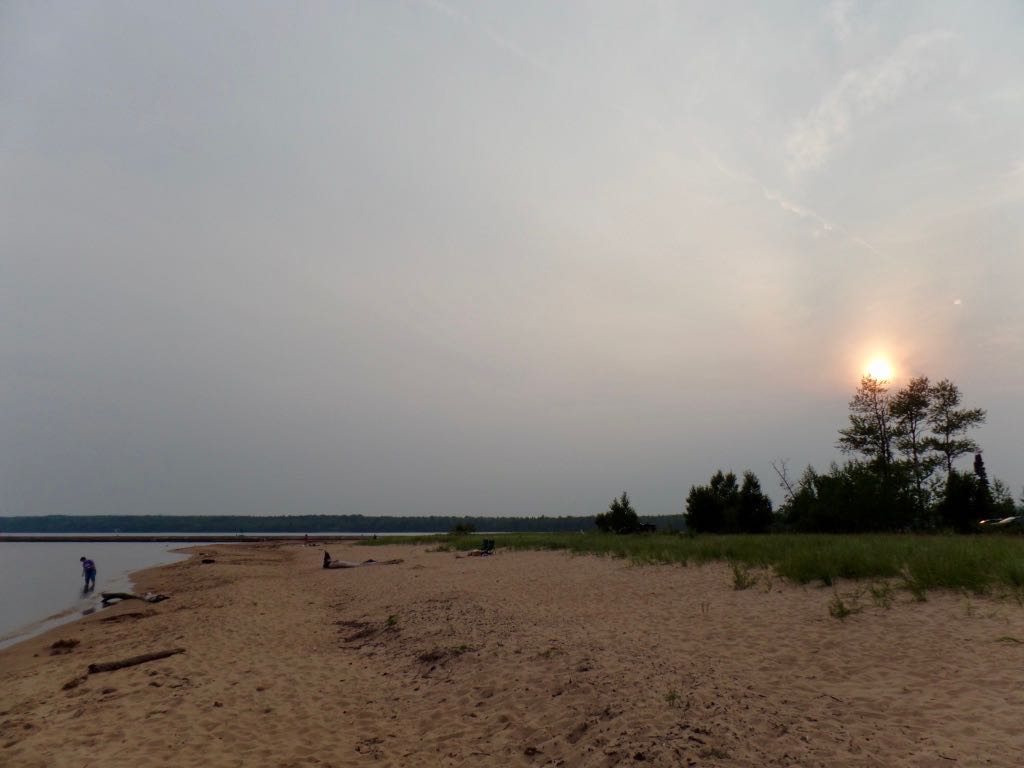 But first, the sun pauses where a tree might tickle it. 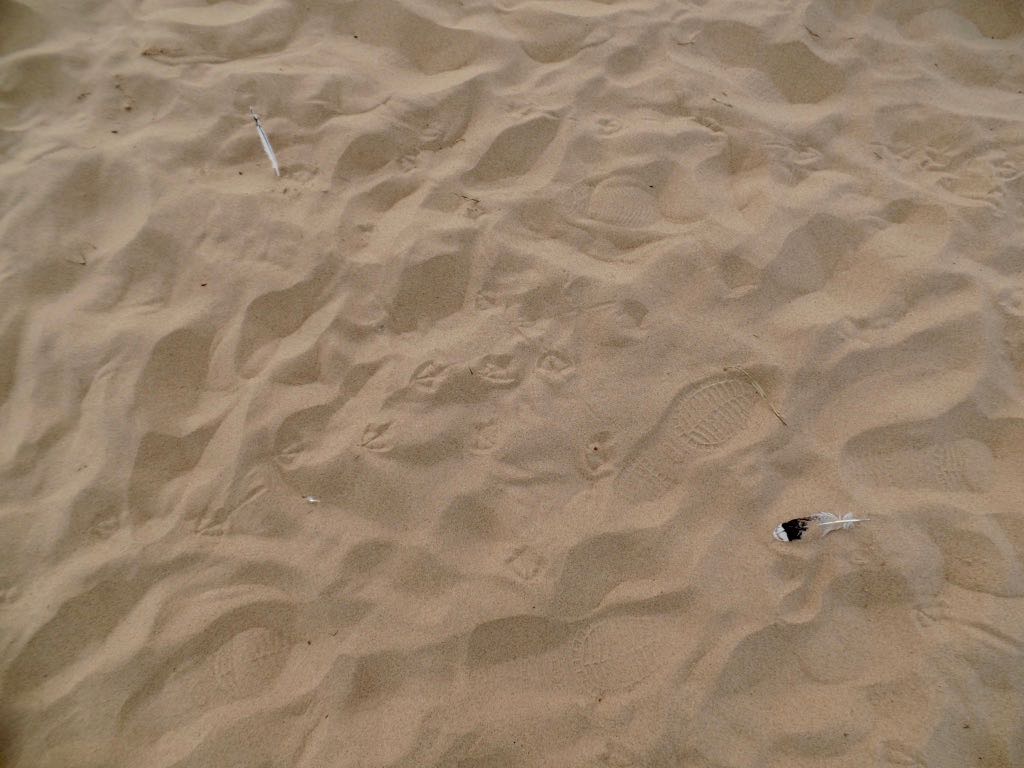 The seagull was in such a hurry it lost its fancy quill pens! Poor gull. 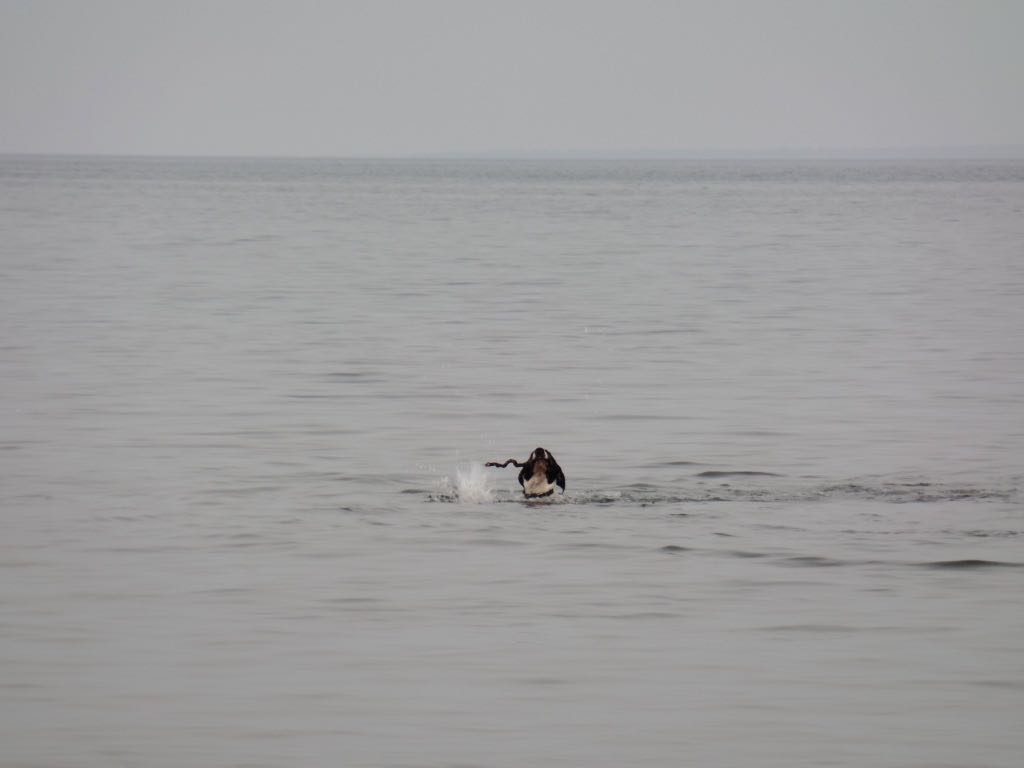 Seagoing doggo has a stick! 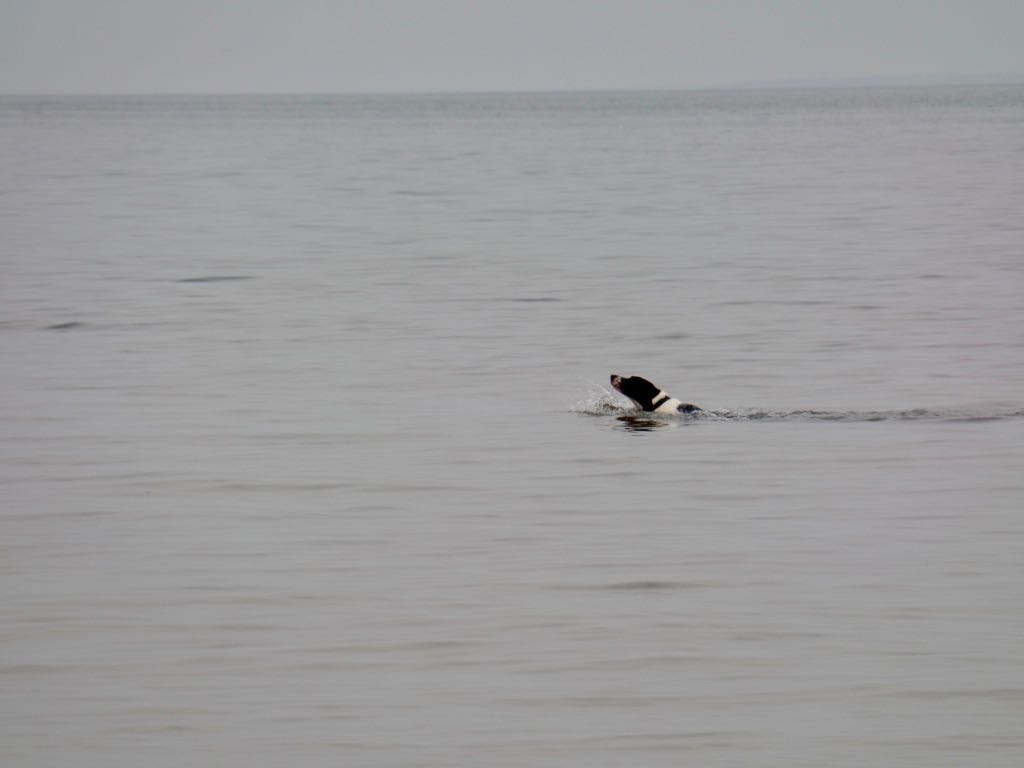 The dog goes paddling all the way back to the boat his people were riding. 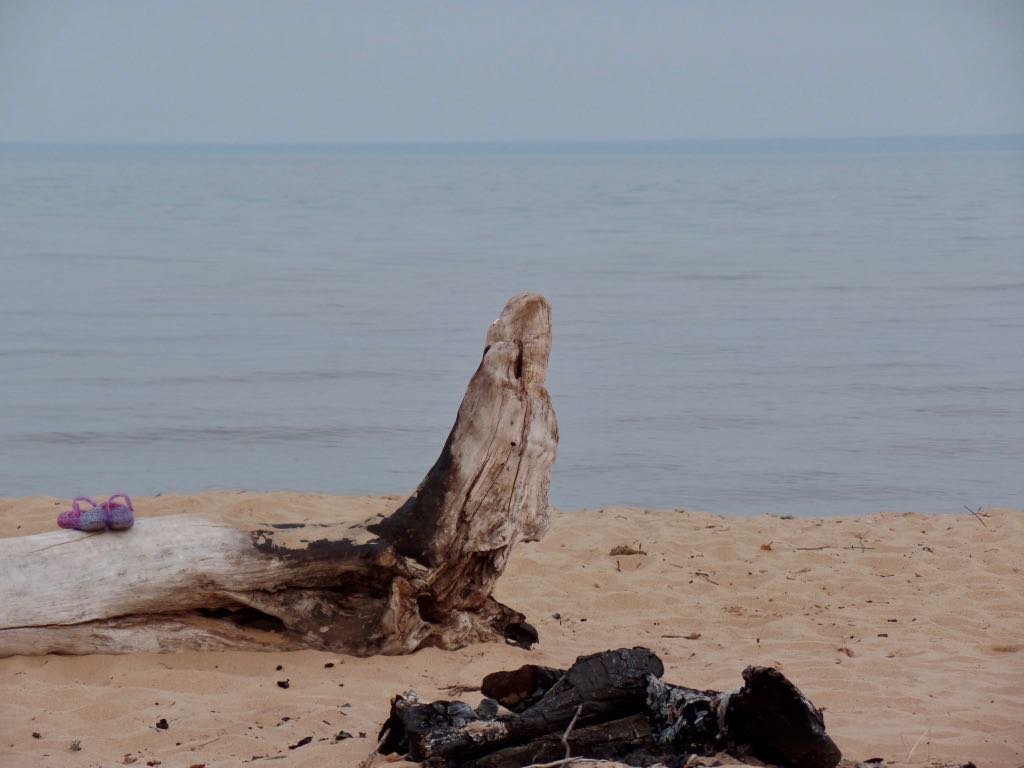 Nice-looking bit of driftwood and a pair of flip-flops that someone left behind. We would end up staying until we were the last people on the beach, which is very much us. 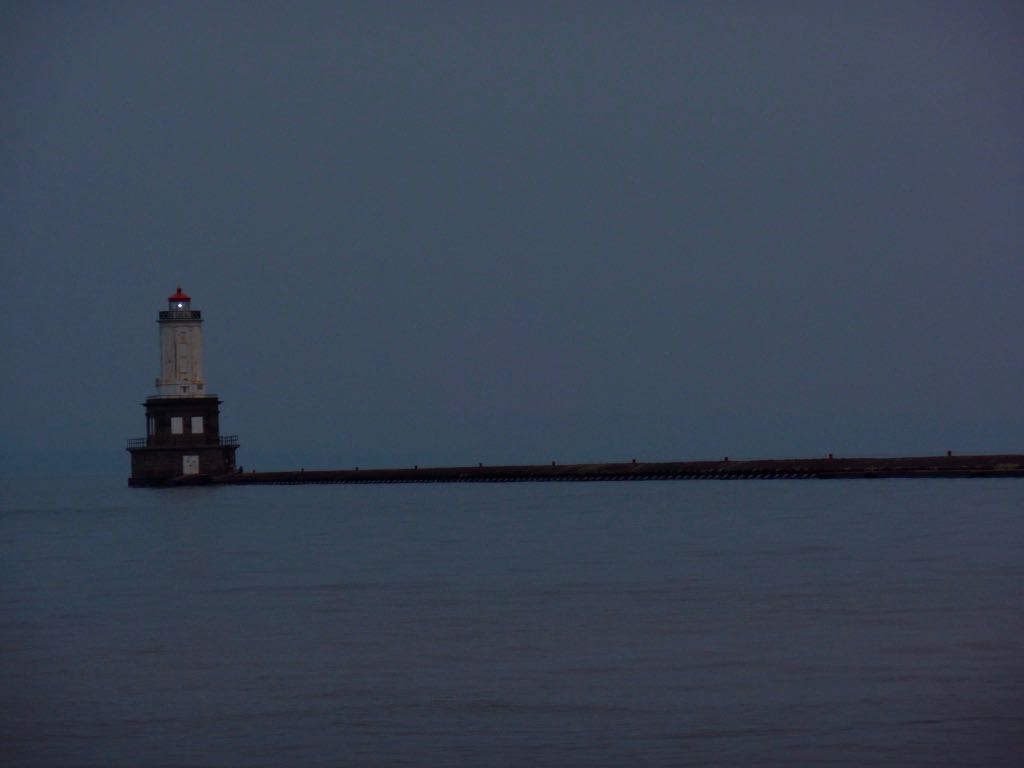 We finally took the hint and left when they turned the lights on for us.

Trivia: The earliest meanings of ``mere'', from before 1390, were to connote ``pure, undiluted, unadulterated''. In the next century it picked up the meaning ``nothing less than'' or ``nothing short of''. Source: Semantic Antics: How and Why Words Change Meaning, Sol Steinmetz.

Currently Reading: Bigfoot: The Life and Times of a Legend, Joshua Blu Buhs.

PS: Reading the Comics, May 9, 2020: Knowing the Angles Edition, which is mostly me making something out of a Nancy strip.