Oh, it's unnecessary but it's home, sweet home

Ready for my report on a story comic? At last? Let me tell you What's Going On In Prince Valiant? What are those women doing with bats? in the February - May 2020 update.

So with this we get to Monday, and the day we drove home. We did not drive straight home. instead we stopped, often, at locations reported to hold letterboxes. This made for our most fruitful day of letterbox-finding ever --- I think we got ten altogether --- but also meant we got home astoundingly late, like, 4:30 am Thursday late. It was worth it. So here's a slice of what that looked like. 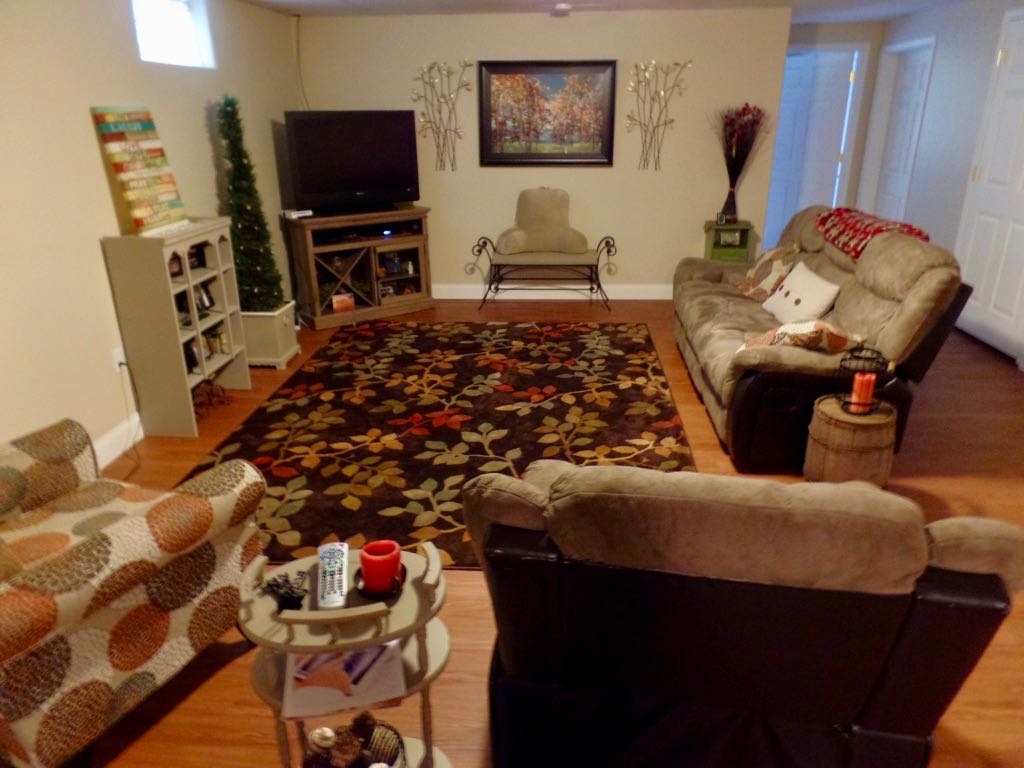 The living room area of our AirBnB, photographed the last day of our visit. The whole area was far more room than we could have used. I sat in the sofa some, but with nearly a full week there we didn't even touch all the furniture. 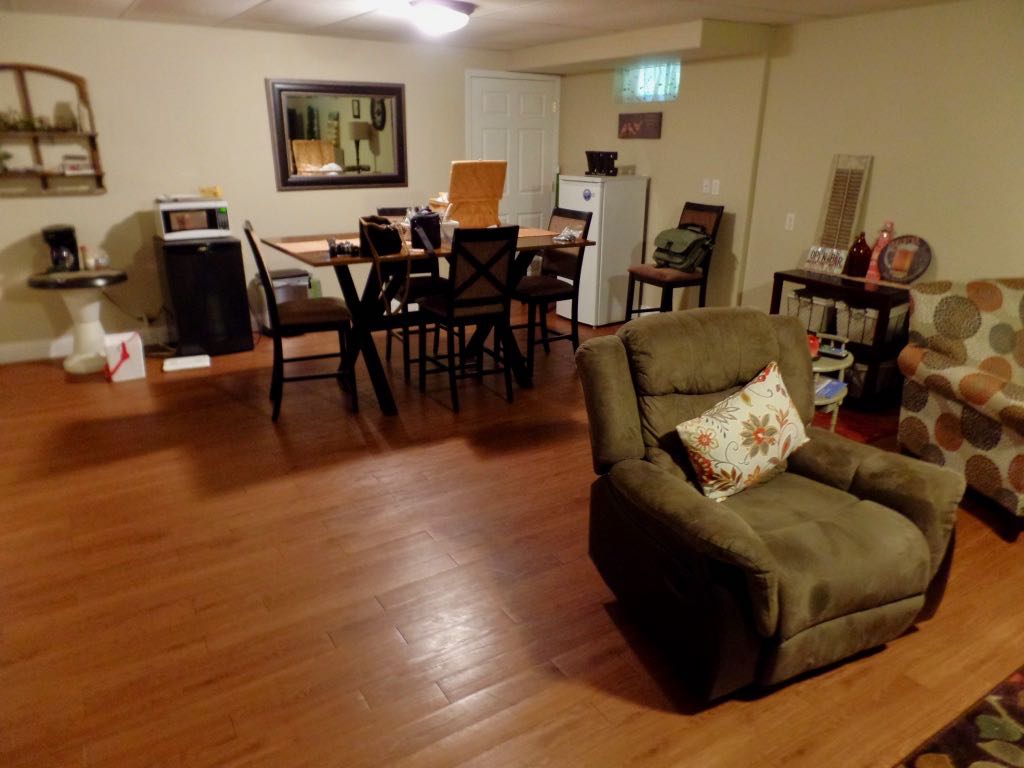 The breakfast nook area which we did use (notice my messenger bag sitting on the stool there, and our picnic basket on the table and cooler on the floor). Also, for a while, I was afraid I'd left our Mi-Fi device here. I had not; I'd left it in the glove compartment of my car. 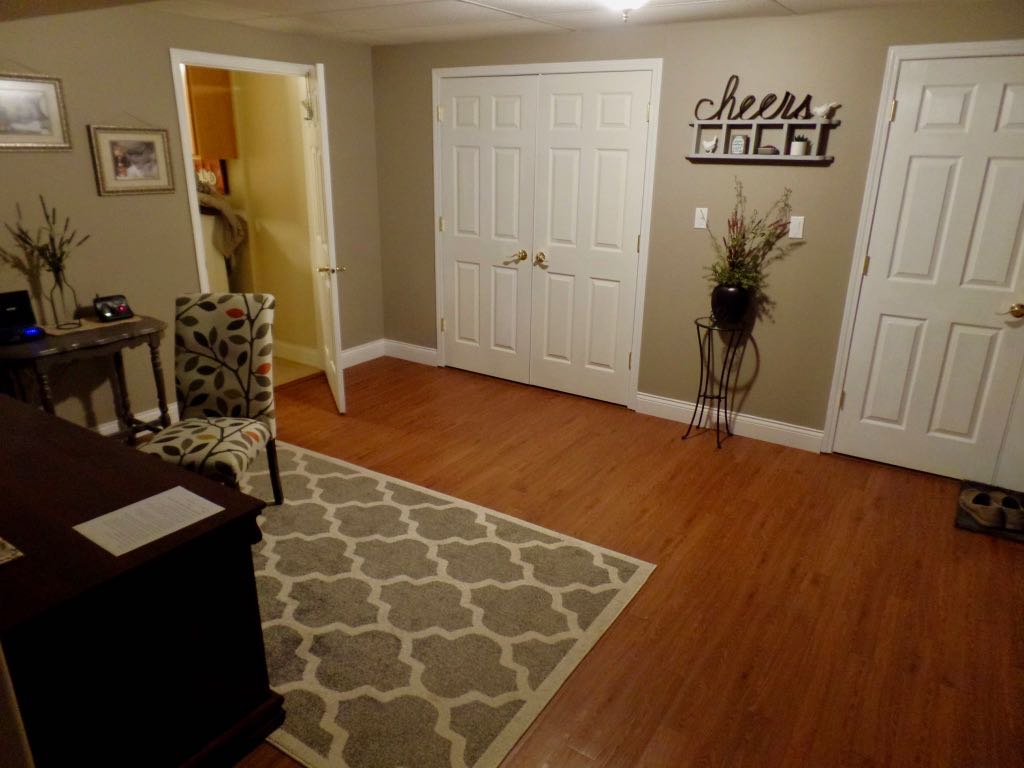 Even more rooms in our basement AirBnB rental. The open door is the bathroom which included a sauna shower. 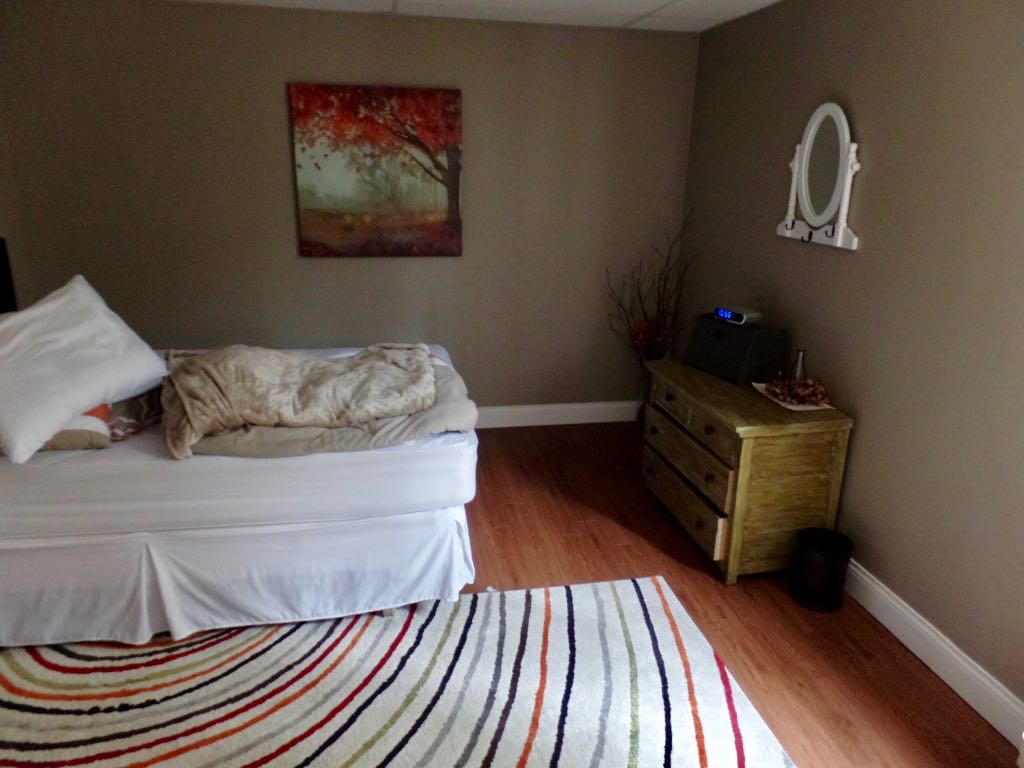 The bedroom, which really would have been all the room we needed. The alarm clock being along the wall opposite the bed meant it was easy to check the time at night. 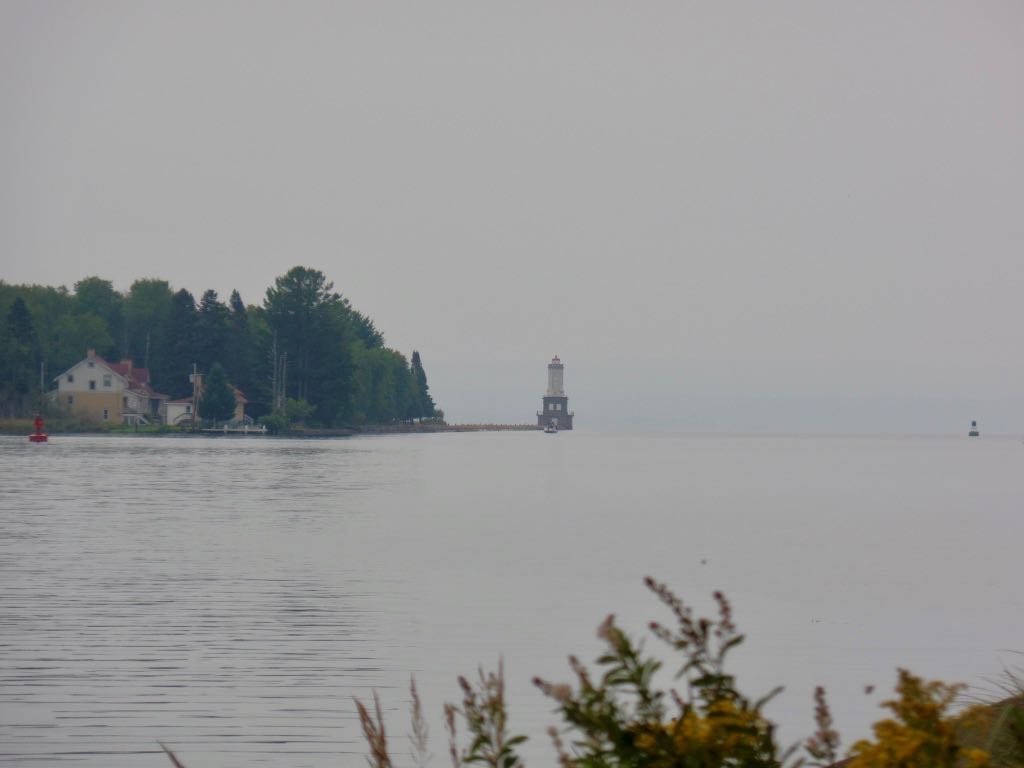 Our first stop, and our first attempted letterbox, was in this park at the opening of the Keweenaw Waterway. That lighthouse there? It's the one we had seen turn on at the end of Sunday night. It's at least a half-hour driving to get from White City Park, across the way, to where we were for this photograph, though. Maybe an hour. 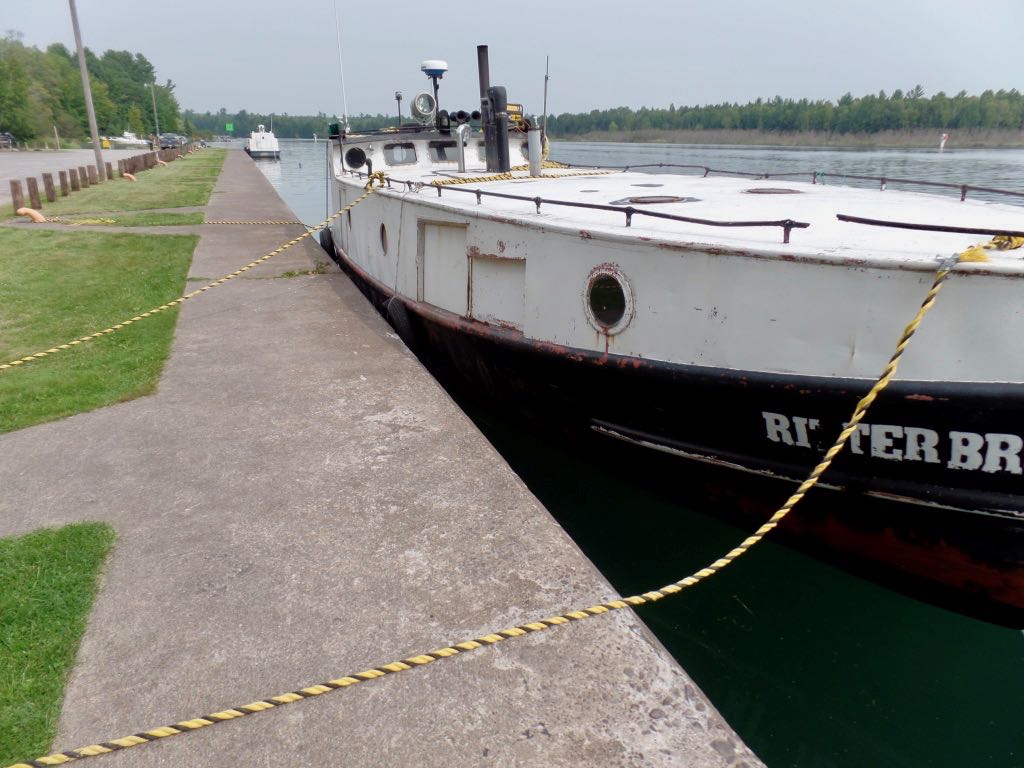 Boats tied up at the Portage Entry park. 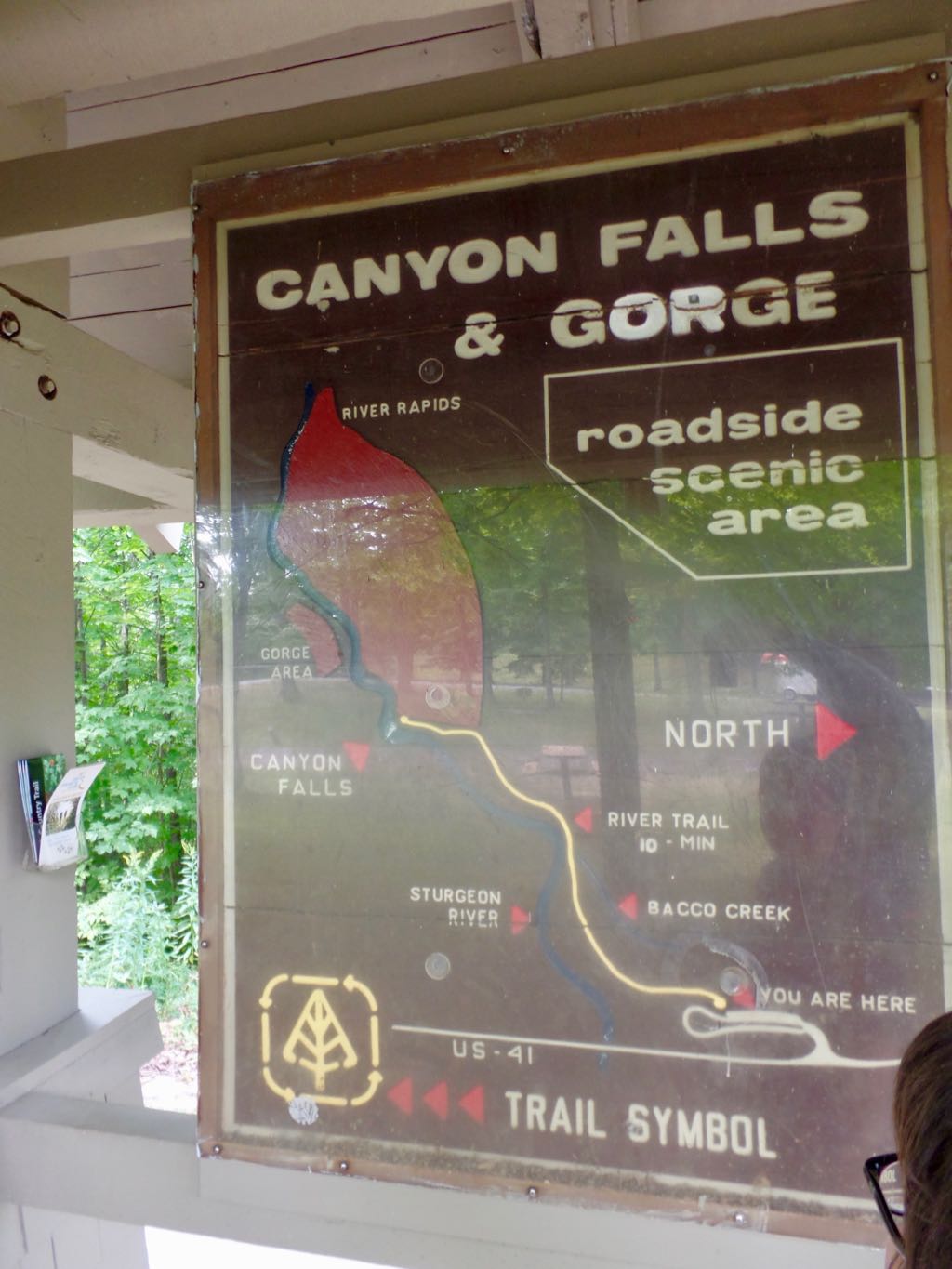 Our second letterbox stop: Canyon Falls and Gorge roadside scenic area. The letterbox clues would lead us down the whole path, as the box's planter wanted us to appreciate the area. 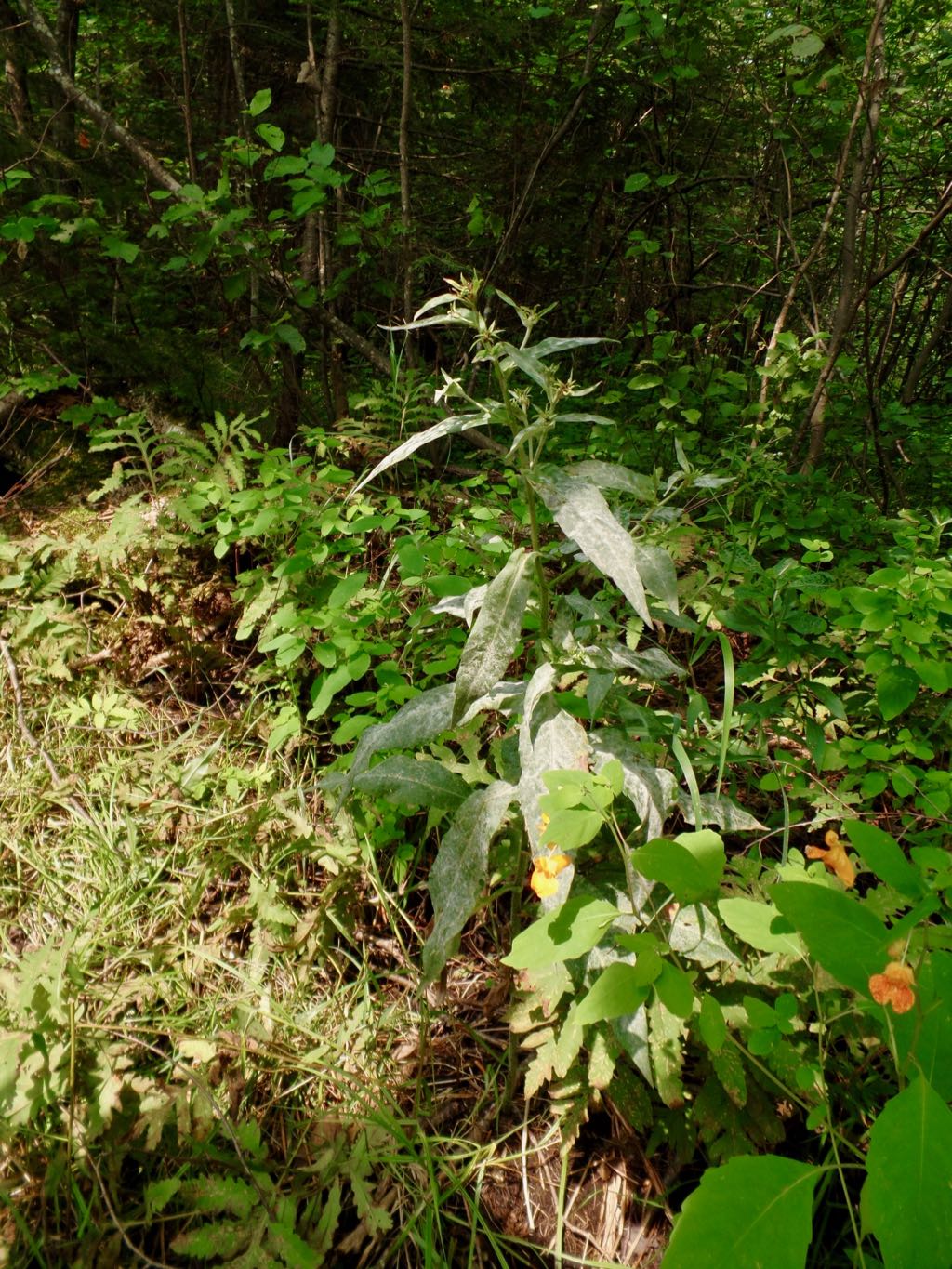 Miscellaneous plants in some nice shafts of light through the woods. 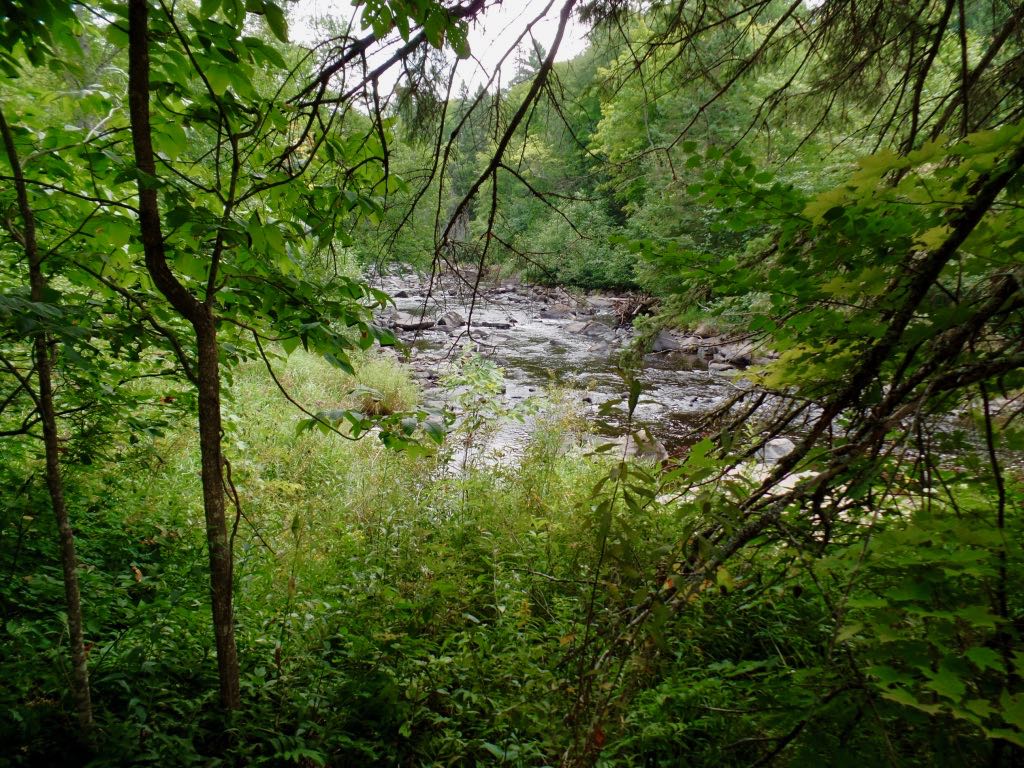 The Sturgeon River seen through the plants. 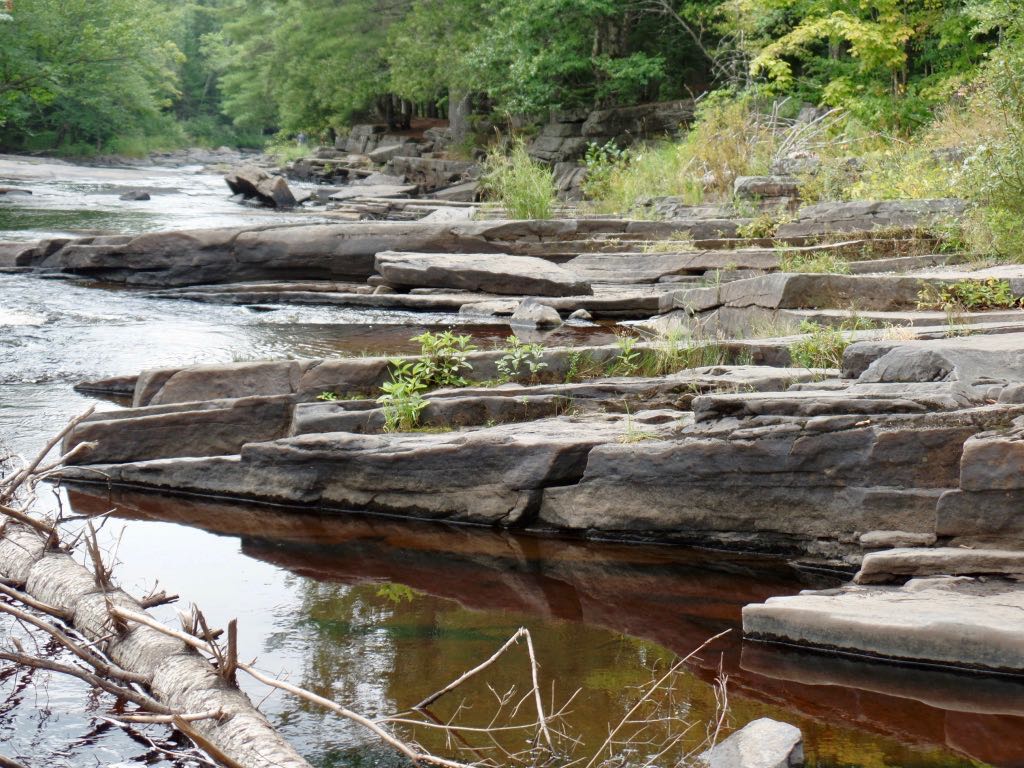 The river runs through these nice great flat stones, so the place looks faintly like a wild Modernist city park. 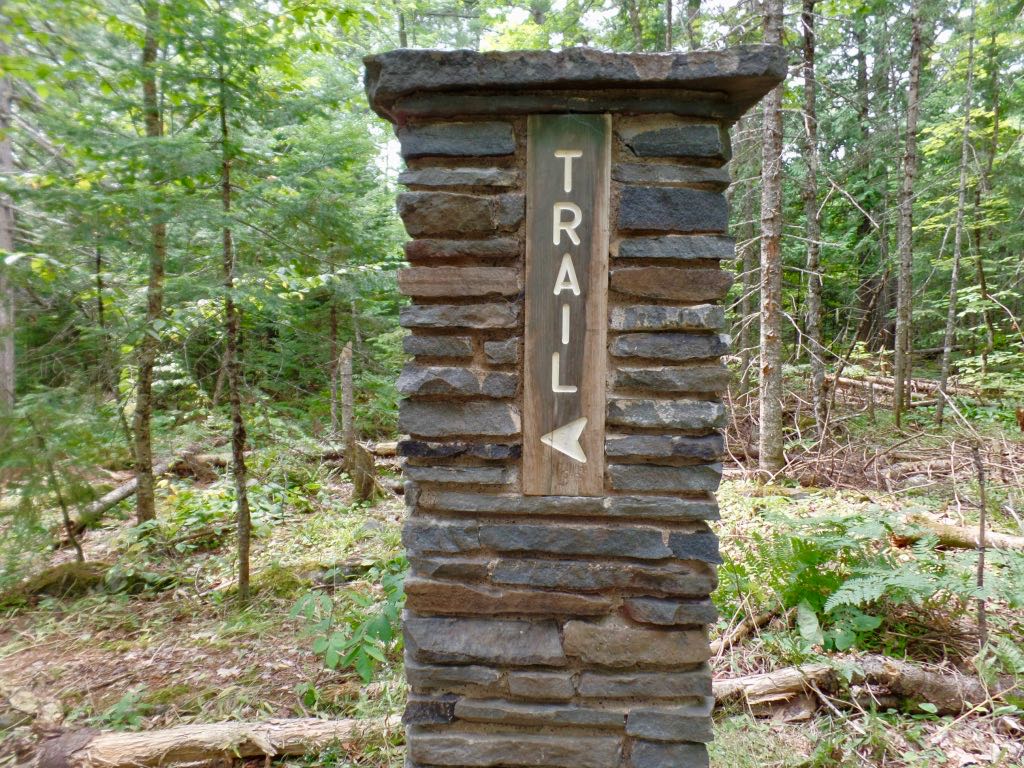 Where to find Mark Trail? There's got to be a clue around somewhere. 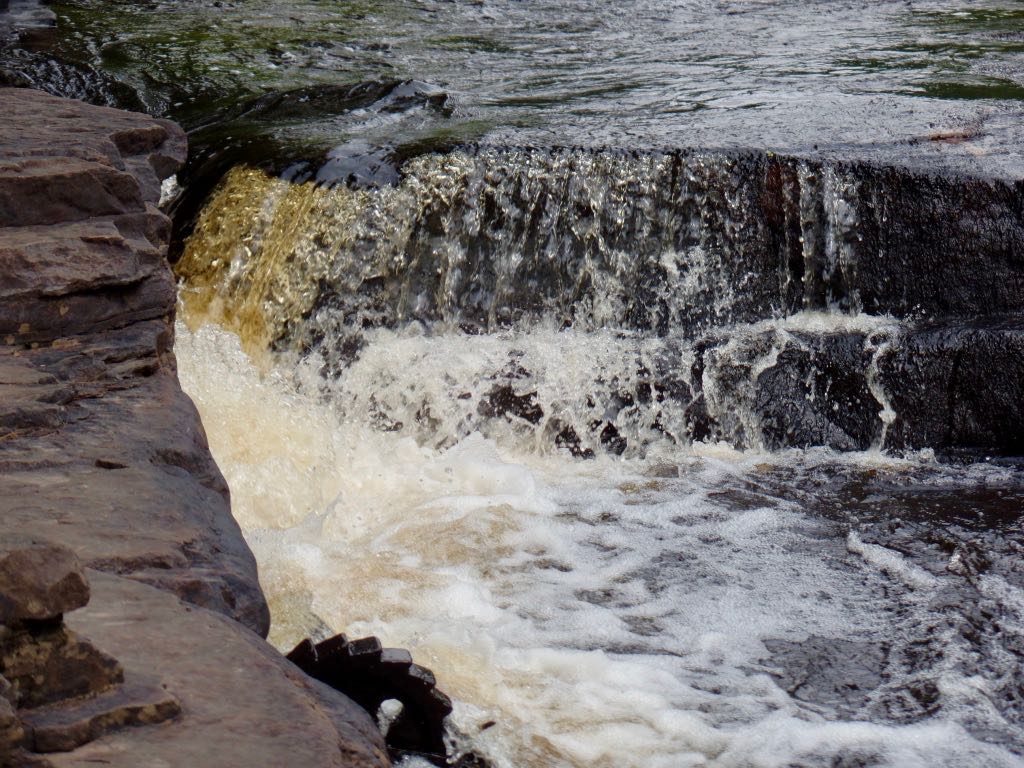 The river has some spots where the water turns brown. I'm not sure if this reflects metals or tree bark in the water tanning it. 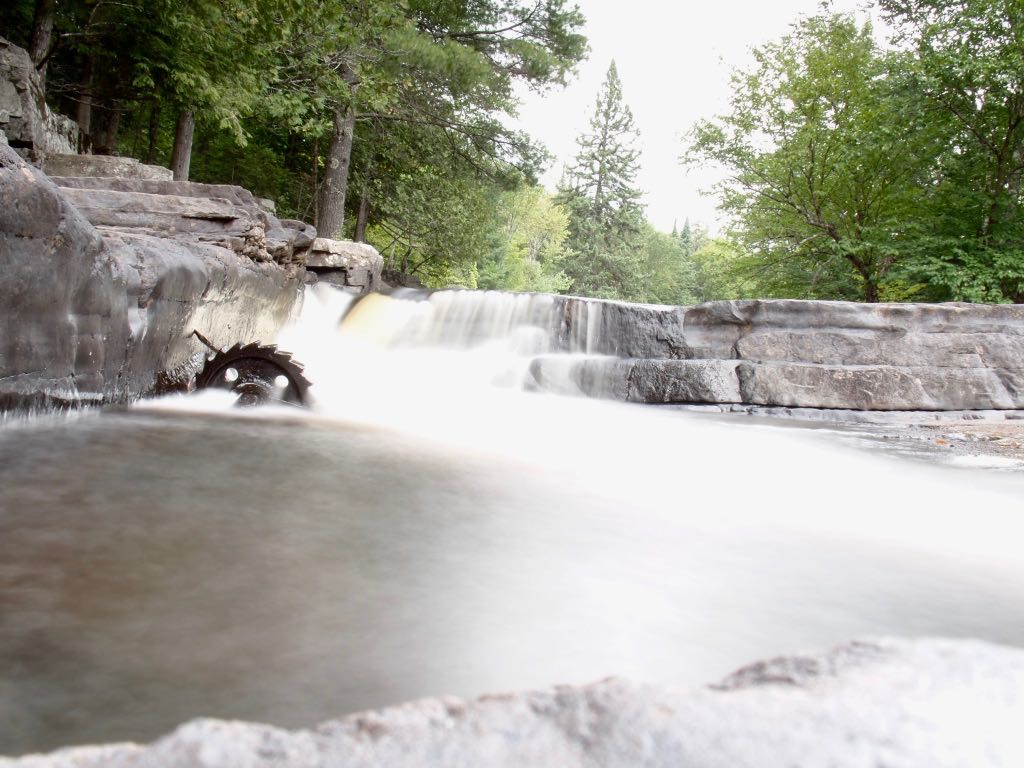 Here I take a low-angle shot, using the long-exposure 'waterfall' mode in my camera and that for once gave me a nice ghostly sheen reflecting the water. Yes, that's some kind of ratchet wheel stuck in there. 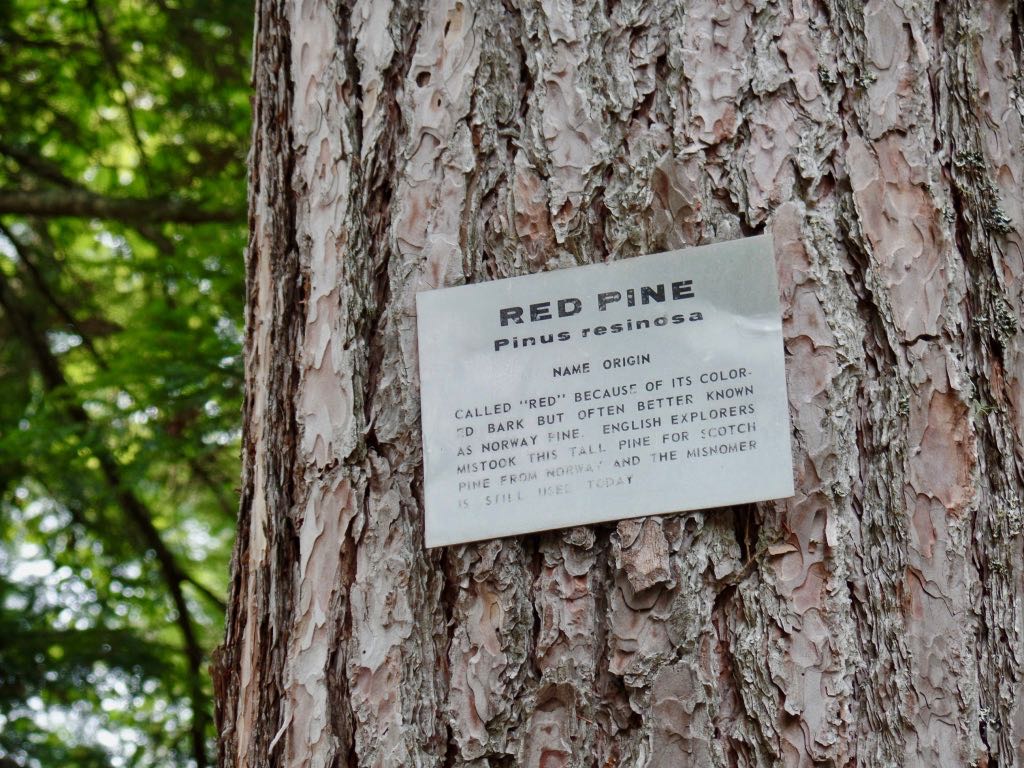 This sign explaining the red pine was one of several marking various trees. The explanation of the red pine that English explorers mistook it for Scotch pine from Norway makes me tired every time I read it. 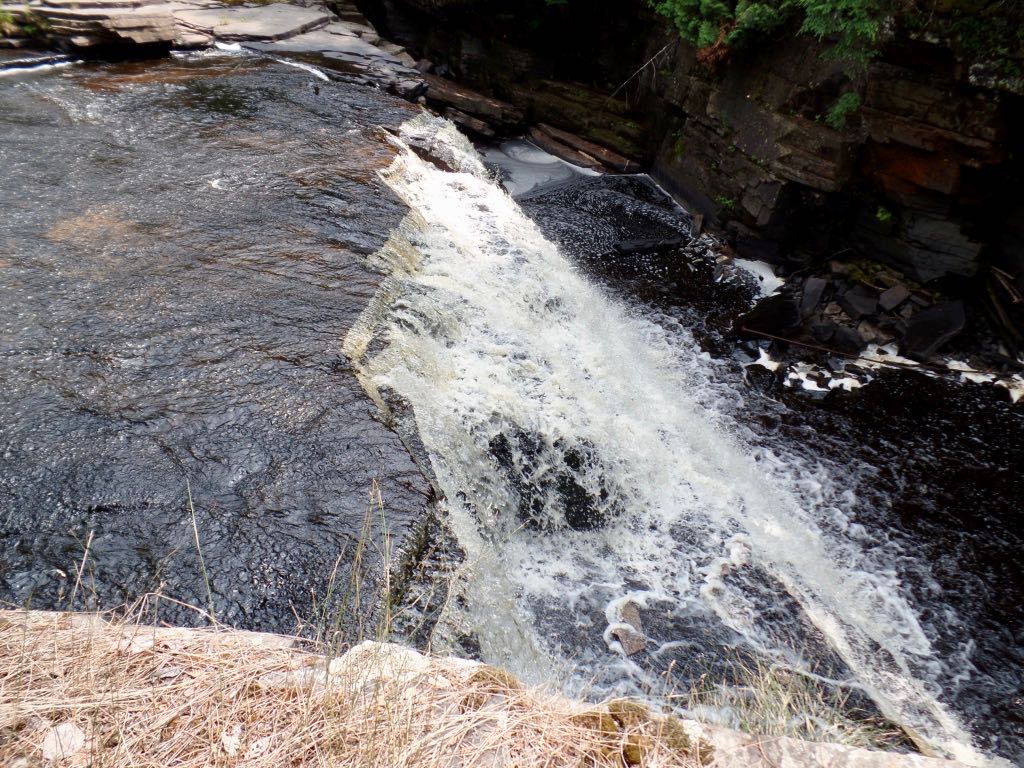 Another of the many small waterfalls in this park; this was near the end of what we could access without doing serious hiking. 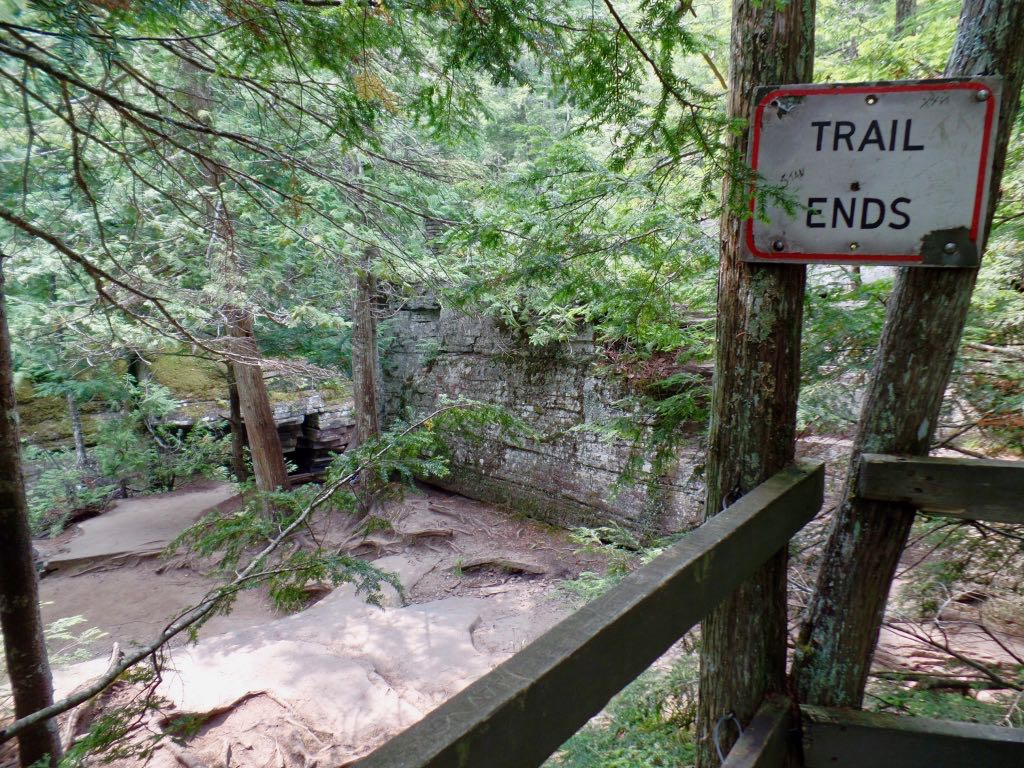 And that's it for Mark Trail, everyone! Good seeing you.

Trivia: An English judge ruled in 1743 that killing an impressment gang member was a legitimate act of self-defence and could be done without legal penalty. Source: To Rule The Waves: How the British Navy Shaped the Modern World, Arthur Herman.

Currently Reading: Bigfoot: The Life and Times of a Legend, Joshua Blu Buhs.