With the wind in the willows and the moon beaming down

We had an almost normal-ish thing Thursday. Sunshine had her annual appointment at the animal ophthalmologist's. They offered to let us postpone it until they could see patients normally, but who knows when that would be? So we figured to do it in quarantine style.

This involved first, sterilizing her carrier with a bit of bleach solution. And I got out some of my older t-shirts, or as

bunny_hugger accurately characterized them rags, to hold the carrier, keeping us from re-contaminating it. When we got to the center we phoned them, and opened the car's hatch back. They took the carrier and Sunshine in for the examination, and called when there was a report. Which took only a few minutes. I think they were done with her quicker than would be under normal circumstances. I'm supposing they had a lot of cancellations.

So, her eyes are good. At least, they're not worse than they had been. Her cataracts have stayed the same, so we'll carry on giving drops in her left eye. And we've set an appointment for next year, a Thursday afternoon in May about this same time.

It's really weird to have just gotten done a routine bit of business.

We haven't taken her to the vet's for her regular full health screening. They're not doing non-emergency care, not yet, although they are hoping to be able to do some of that soon.

So now let's get back to that drive home. And, particularly, more photographs of Lakenenland since that's an extremely photographable collection of junkyard art. 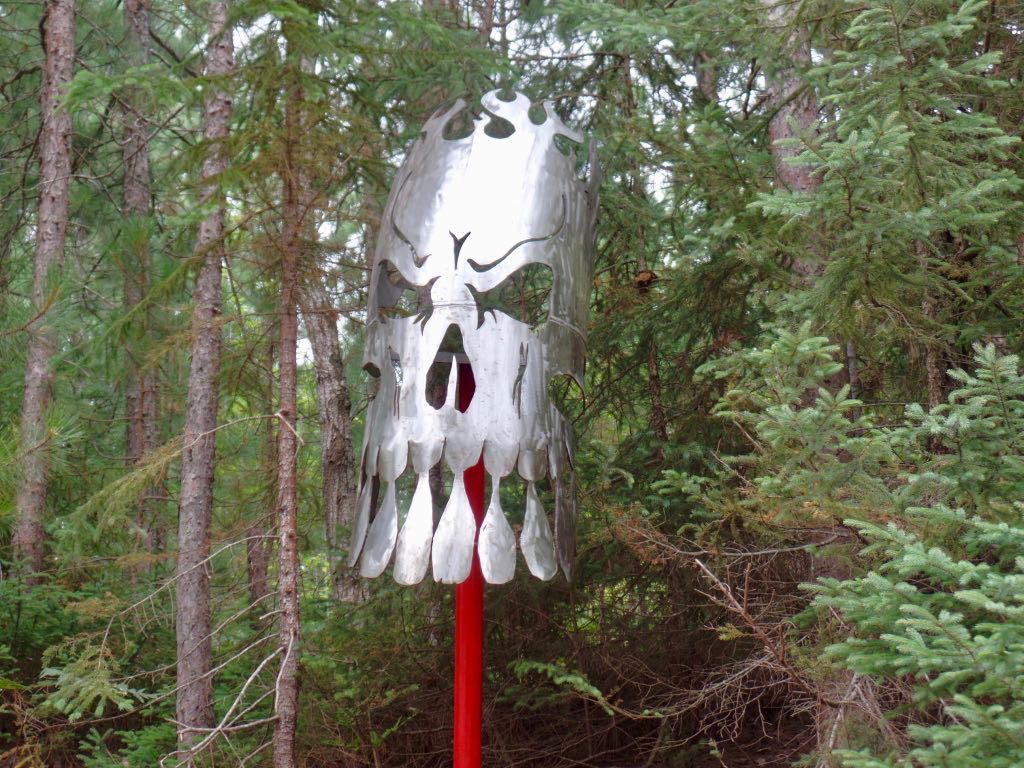 Totally metal! A Lakenenland sculpture that evokes a skull on a pole. 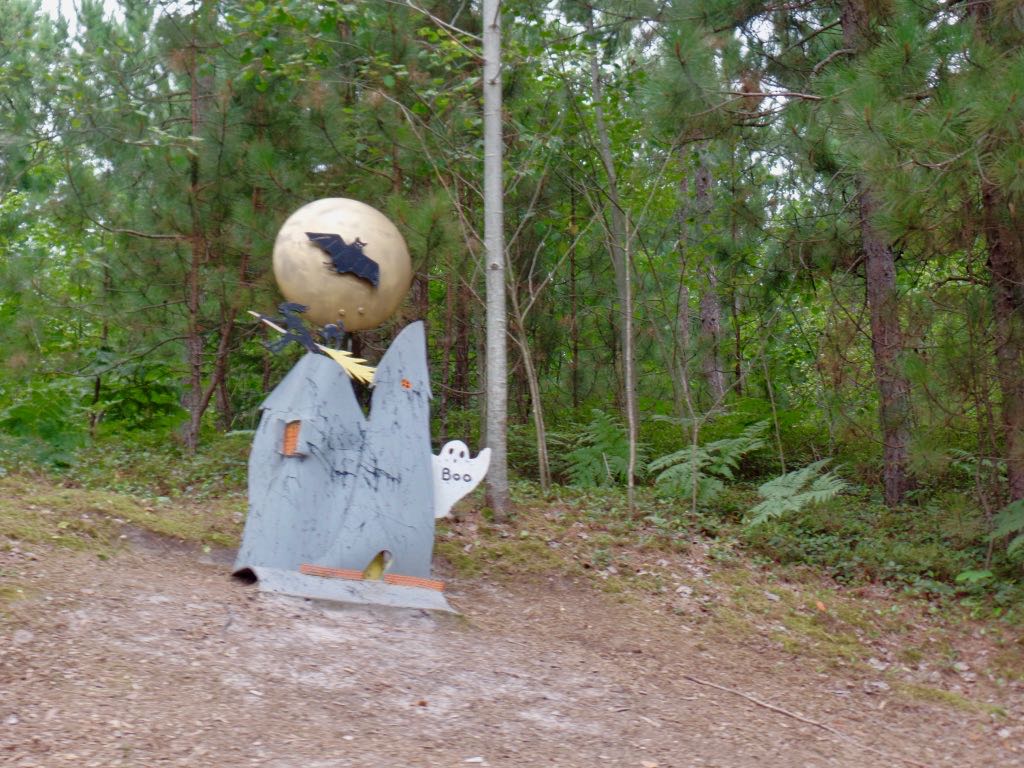 I'm guessing this ghost peeking out from the trees was made for Halloween. 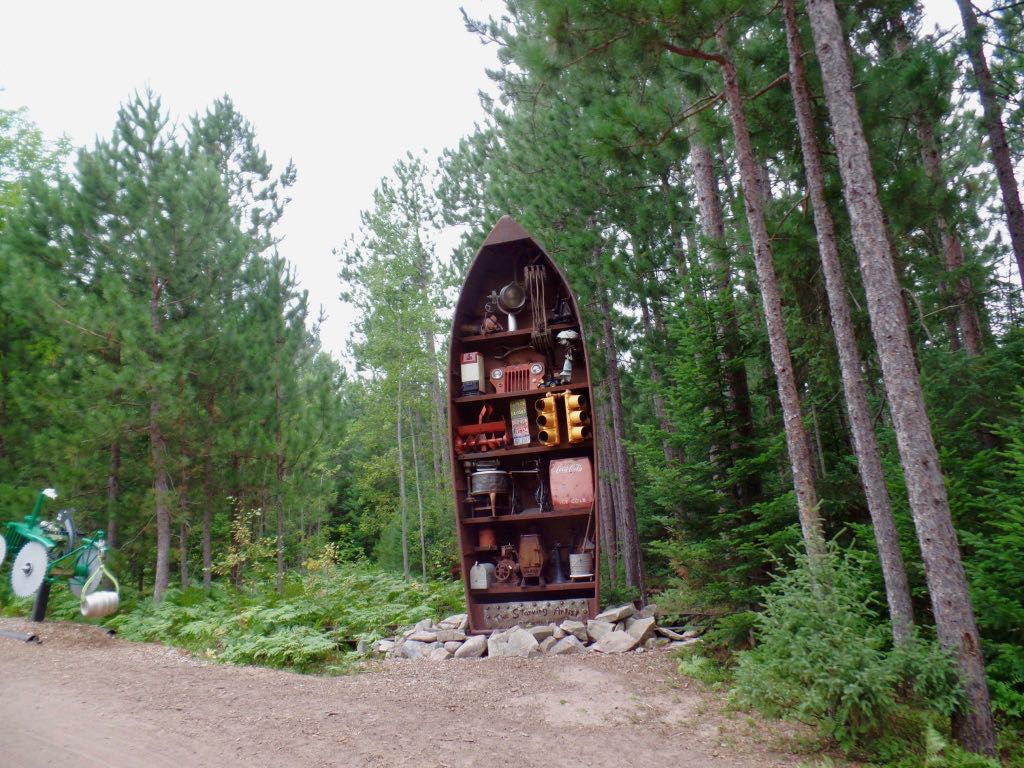 So here's a sailboat stuffed full of kitchen stuff and a traffic light and a model car and a miniature mailbox. So, you know, a TGI Friday's in a box. 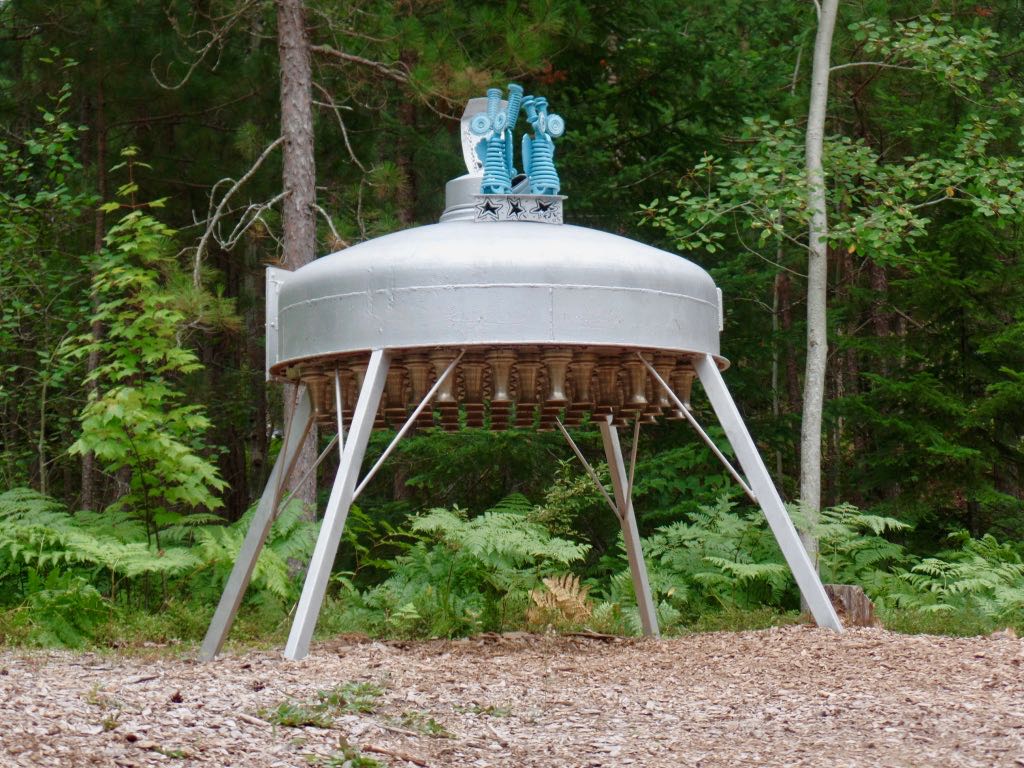 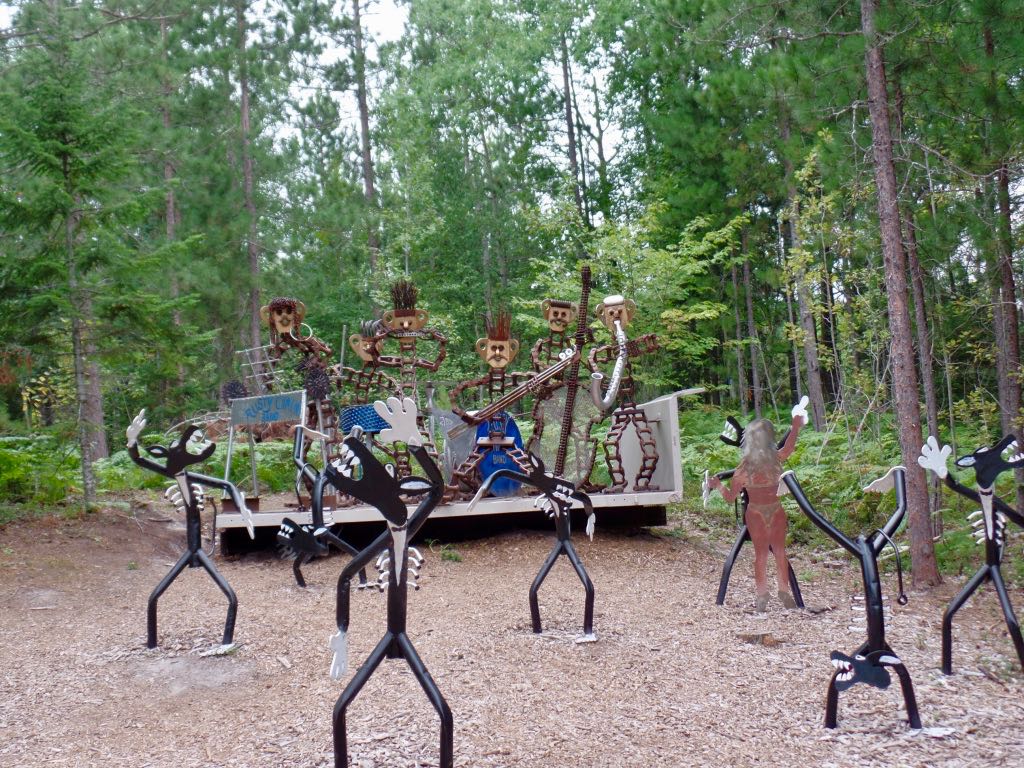 And here's a concert in the park. 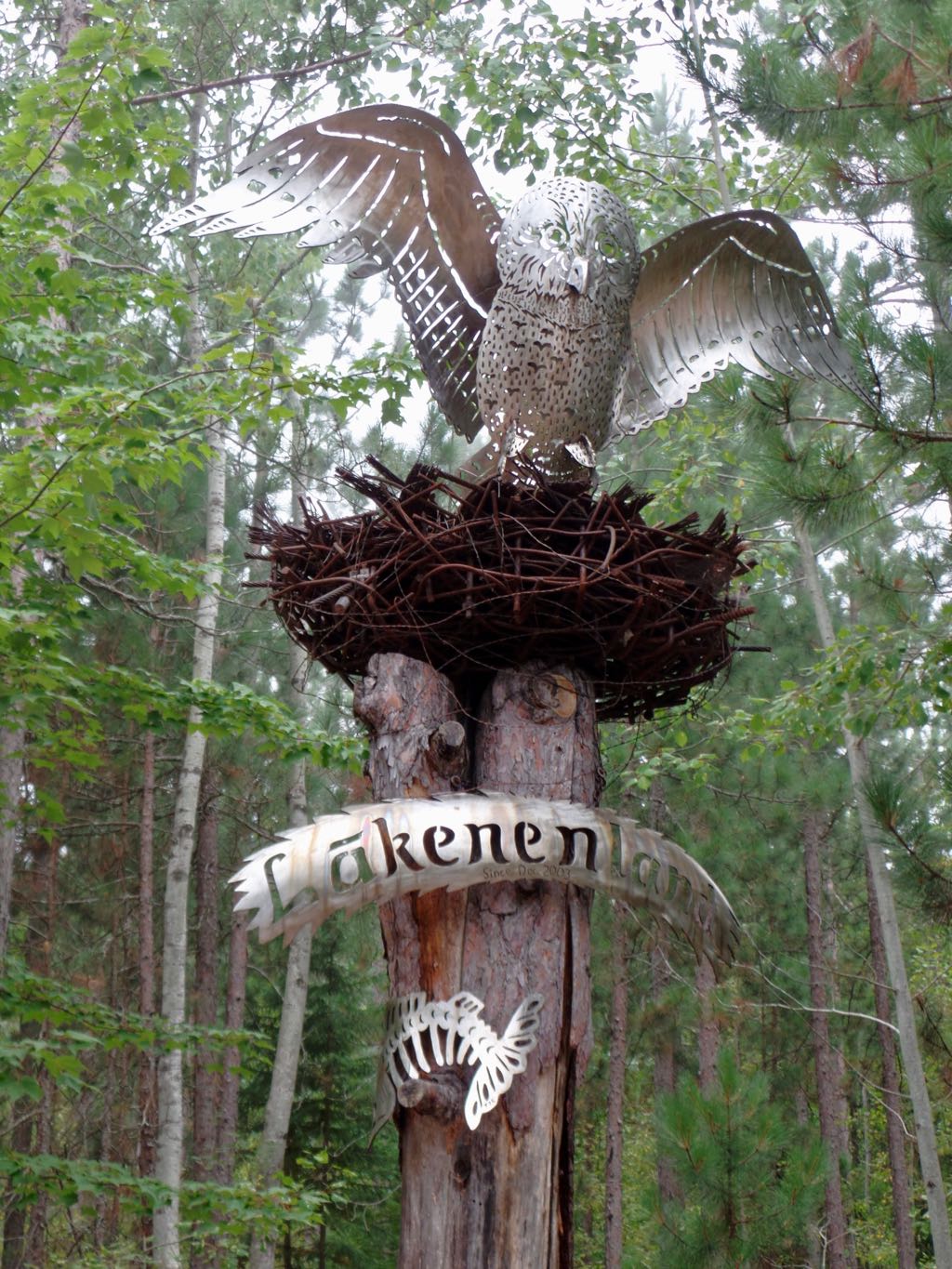 Nice to see Bubo from Clash of the Titans has a retirement home up north. 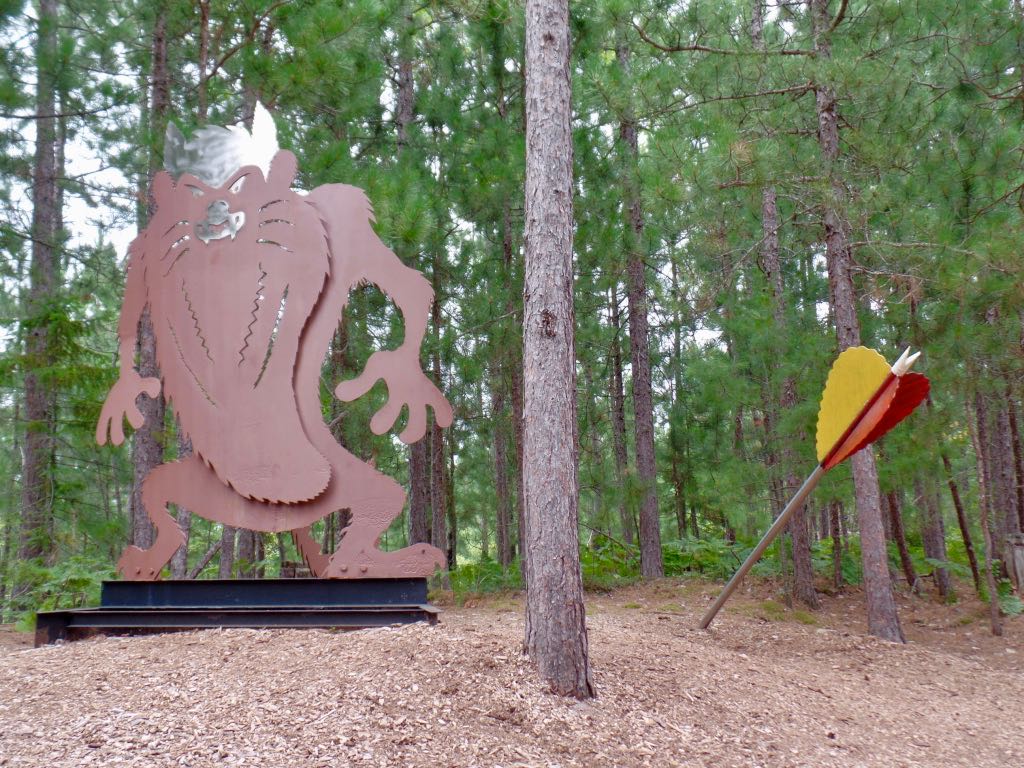 The Tasmanian Devil next to a giant arrow seems like a scene from a cartoon I can't remember. 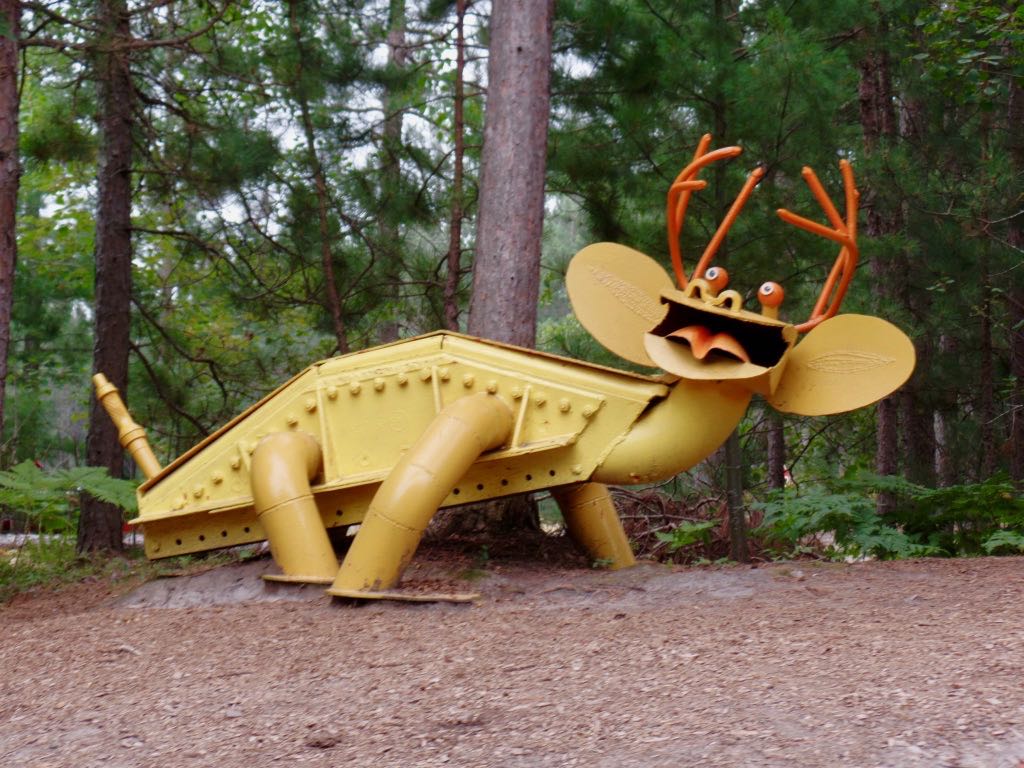 Draw your fursona riding this challenge. 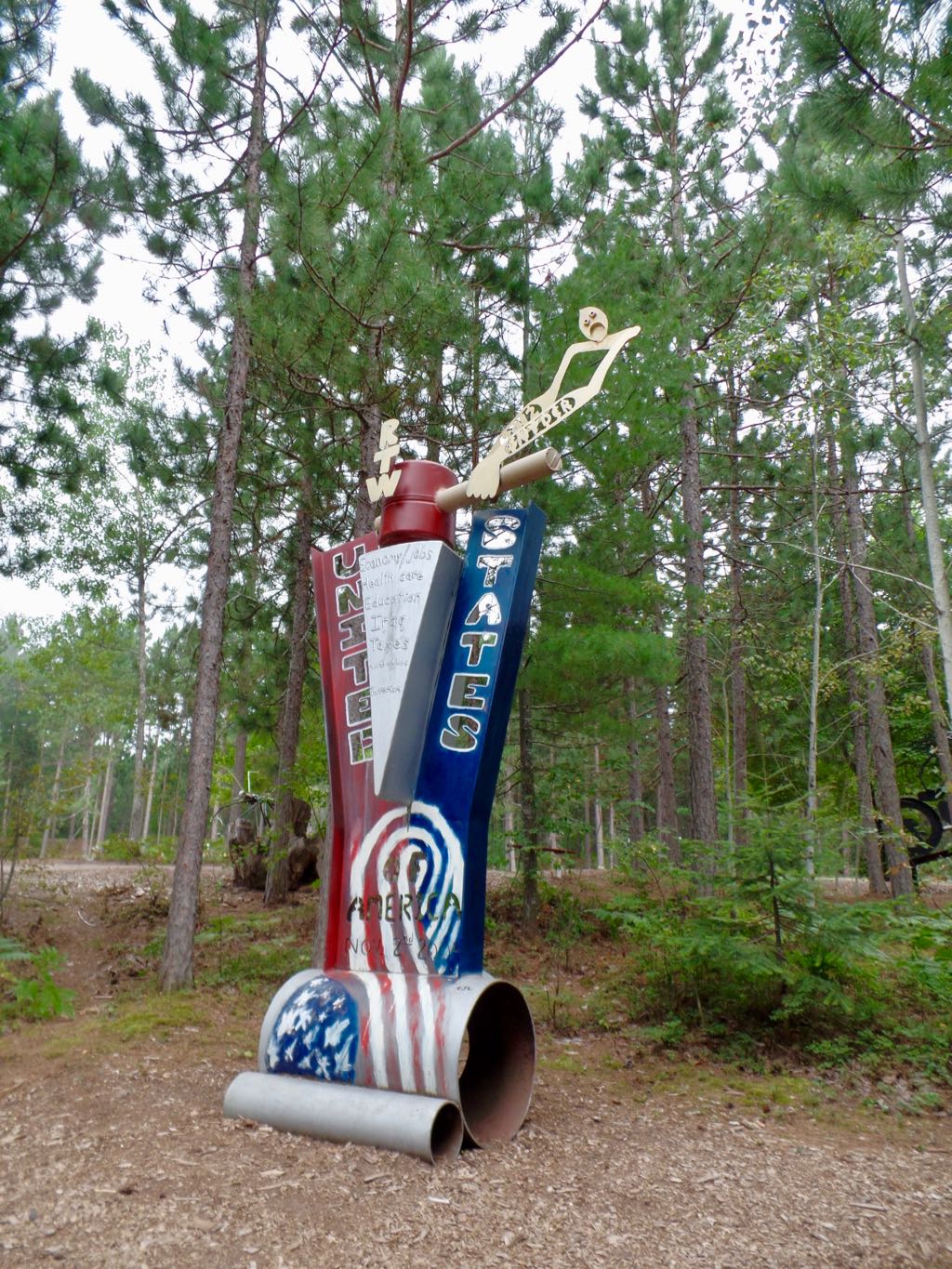 Oh yeah, so I guess the artist behind Lakenenland has political opinions. Here the United States is being split by a wedge of Economy/Jobs, Heath Care, Education, Iraq, Taxes, Moral Values, and Terrorism. The hammer is RTW (so-called ``Right-to-Work'') and being driven by disgraced then-governor Rick Snyder. It's dated November 2, 2004, so as

bunny_hugger pointed out, the Rick Snyder (elected 2010) stuff was a later addition. 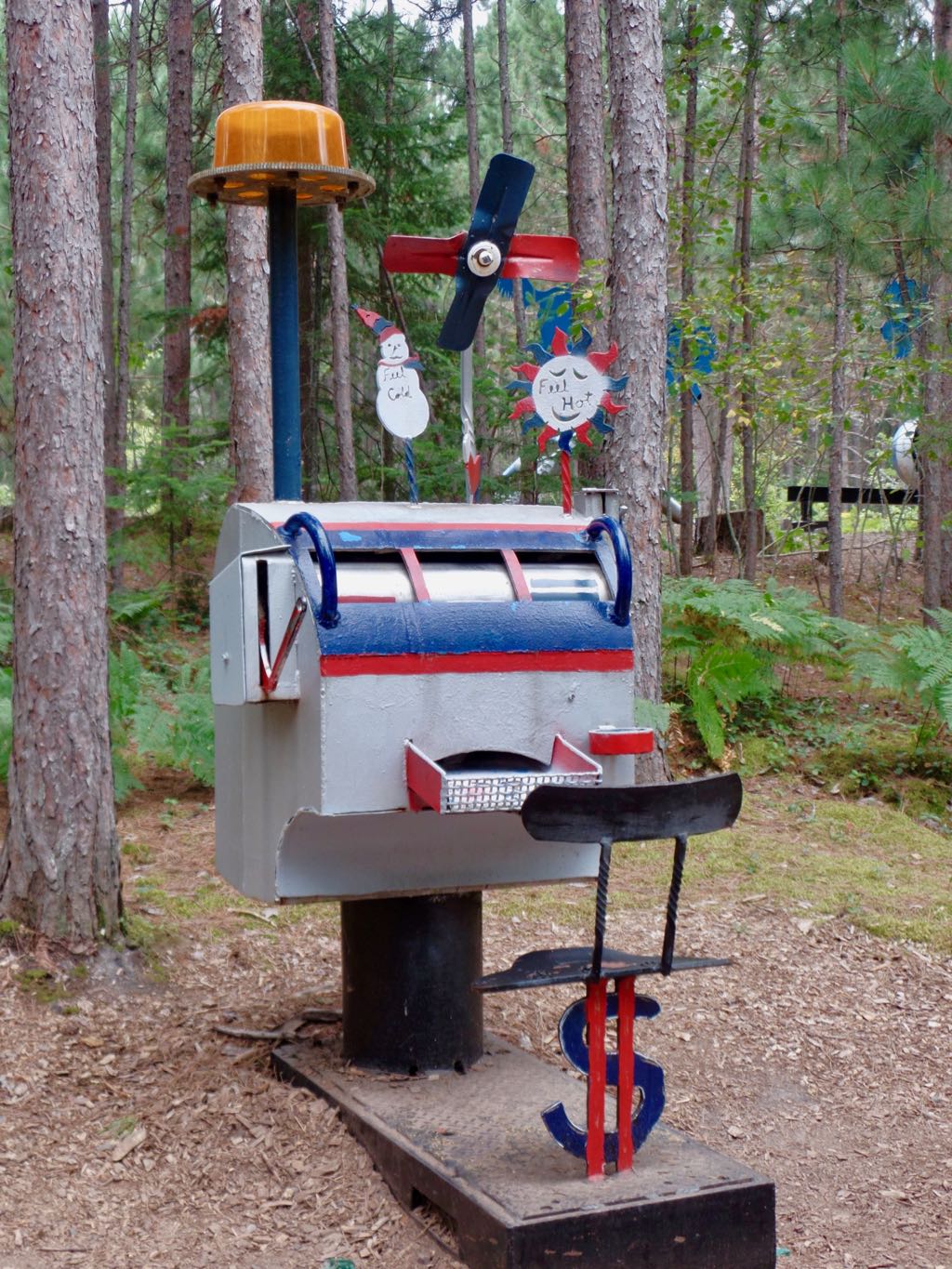 And here's a weather-machine slot-machine. I don't believe that it worked but we didn't dare try the handle. 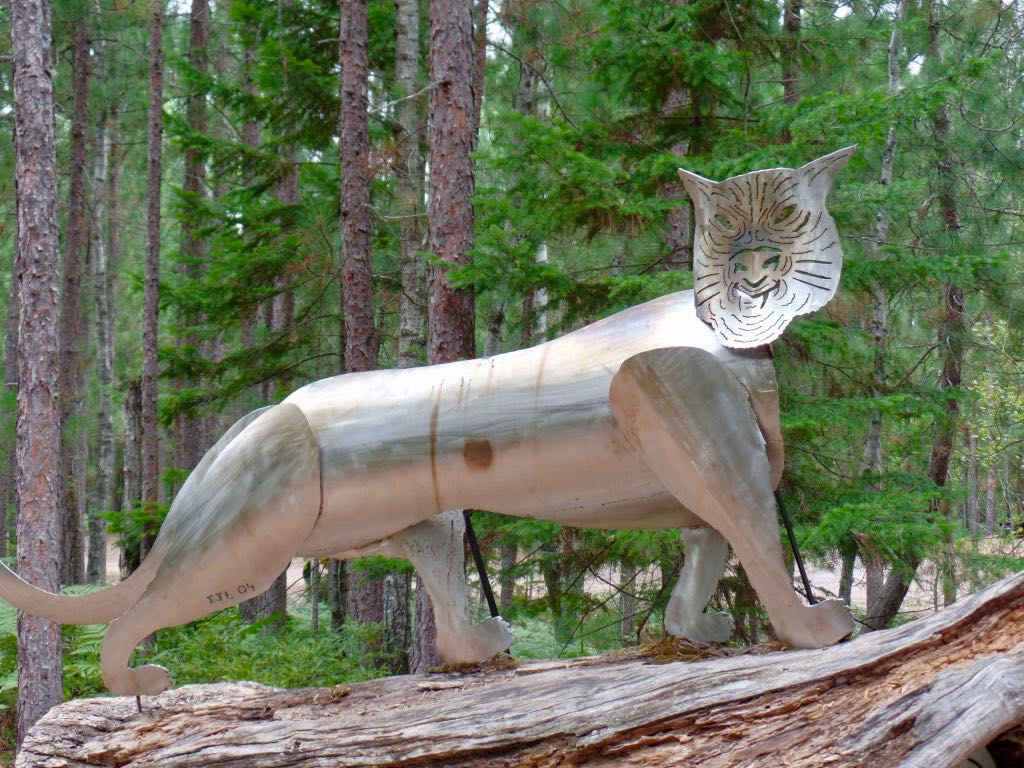 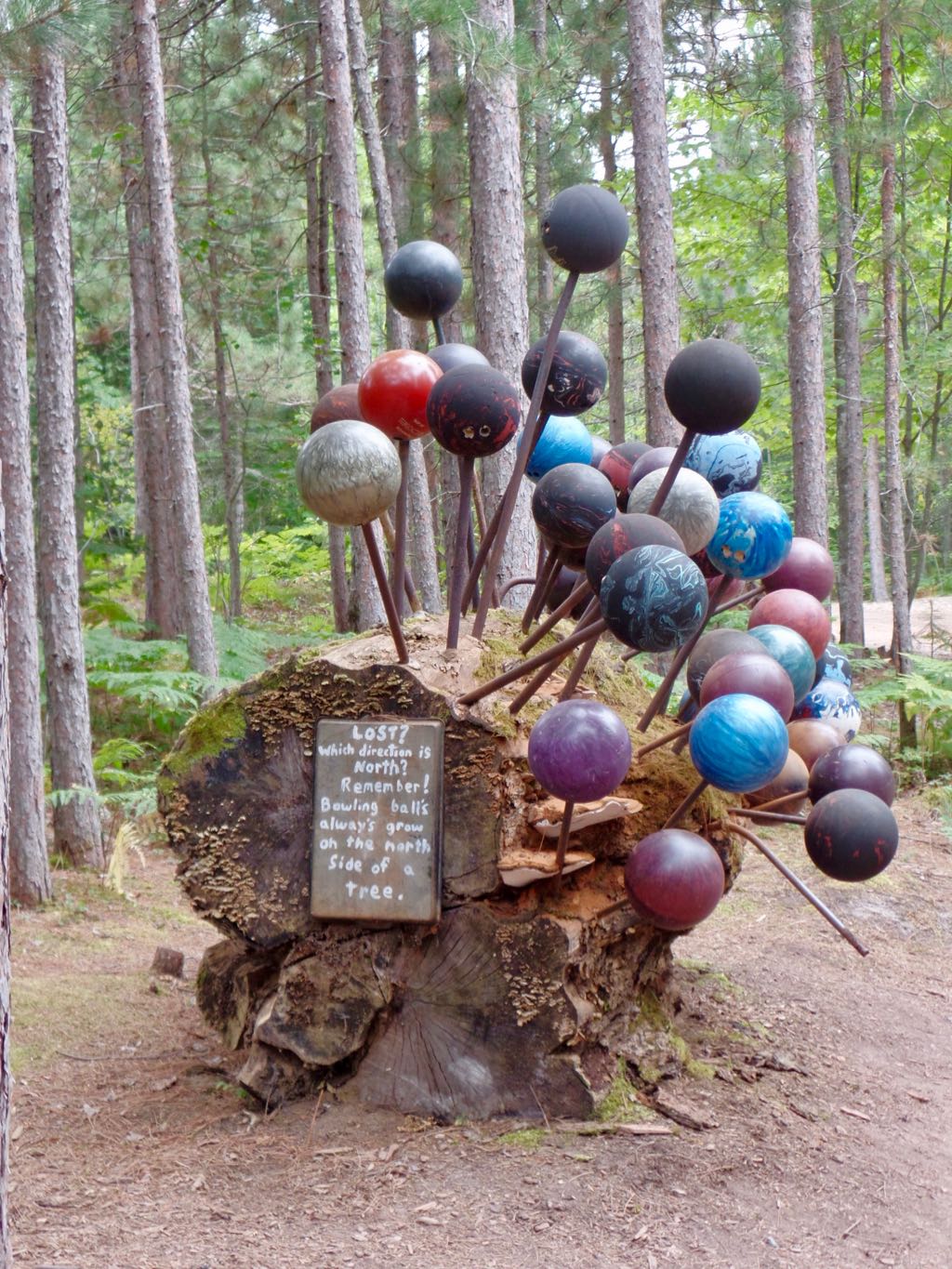 ``Lost? Which direction is north? Remember! Bowling balls always grow on the north side of a tree.'' A wonderfully surreal little installation that any city park would be proud to have. 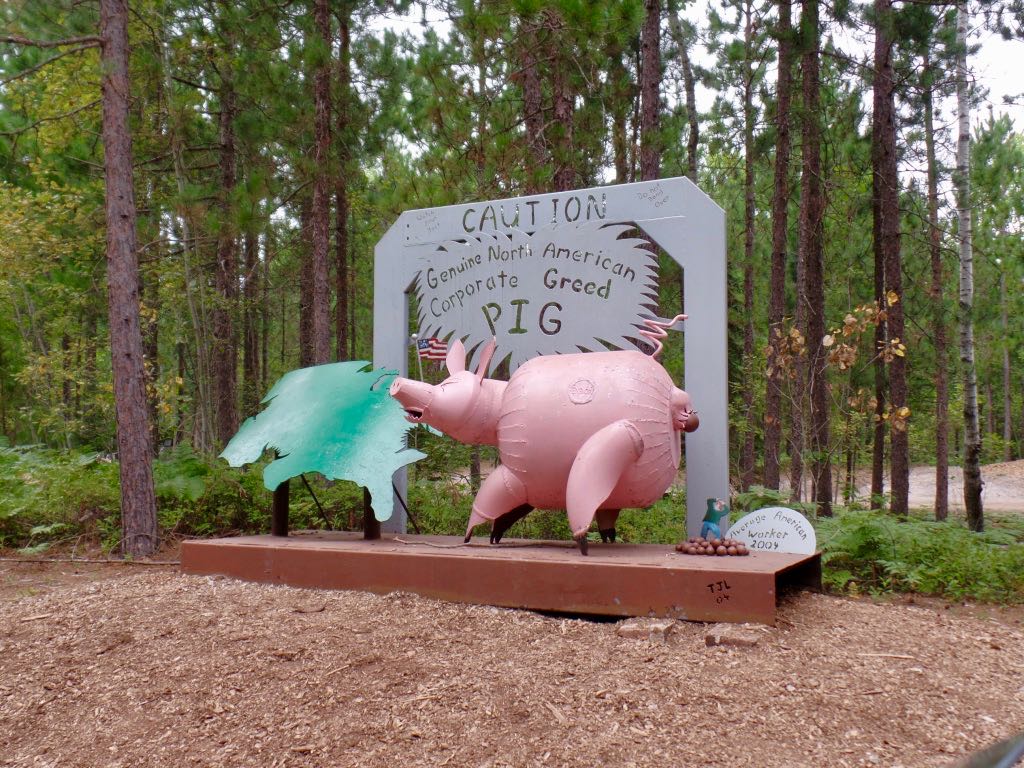 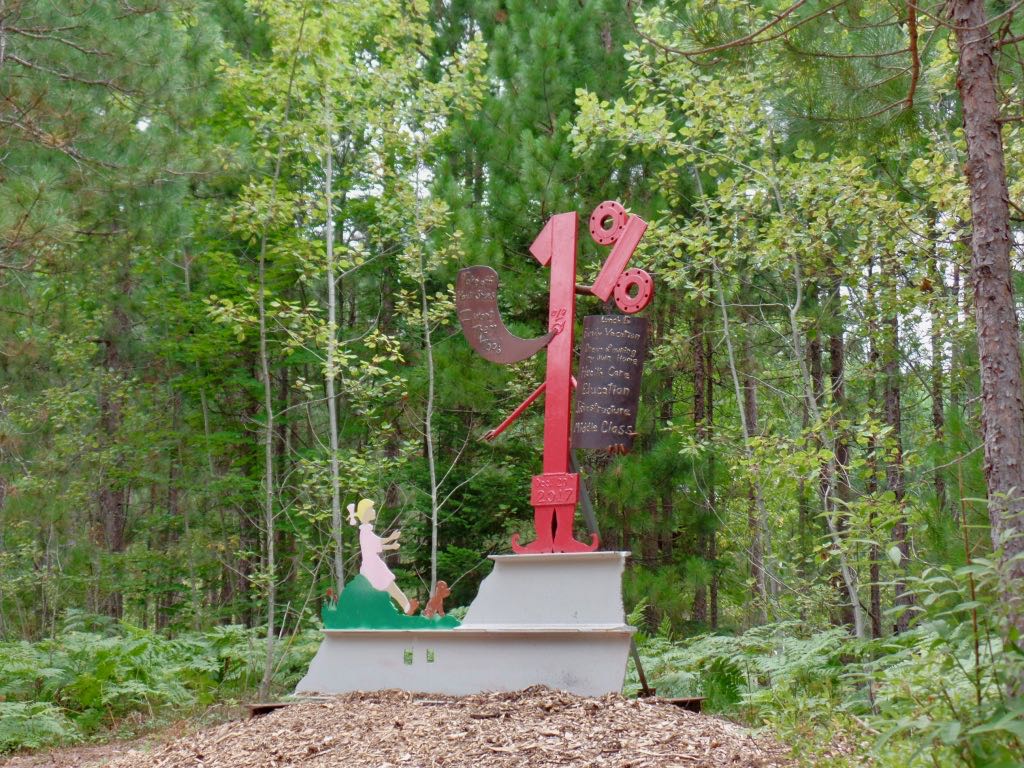 Similarly I expect this statue, dated December 20, 2017, showing a great figure 1 holding a plaque reading 'Lunch $, Family Vacation, Dream of owning my own home, Heath Care, Education, Infrastructure, Middle Class', pointing at a little girl and saying, 'Take off your shoes, I want them too!' means something. 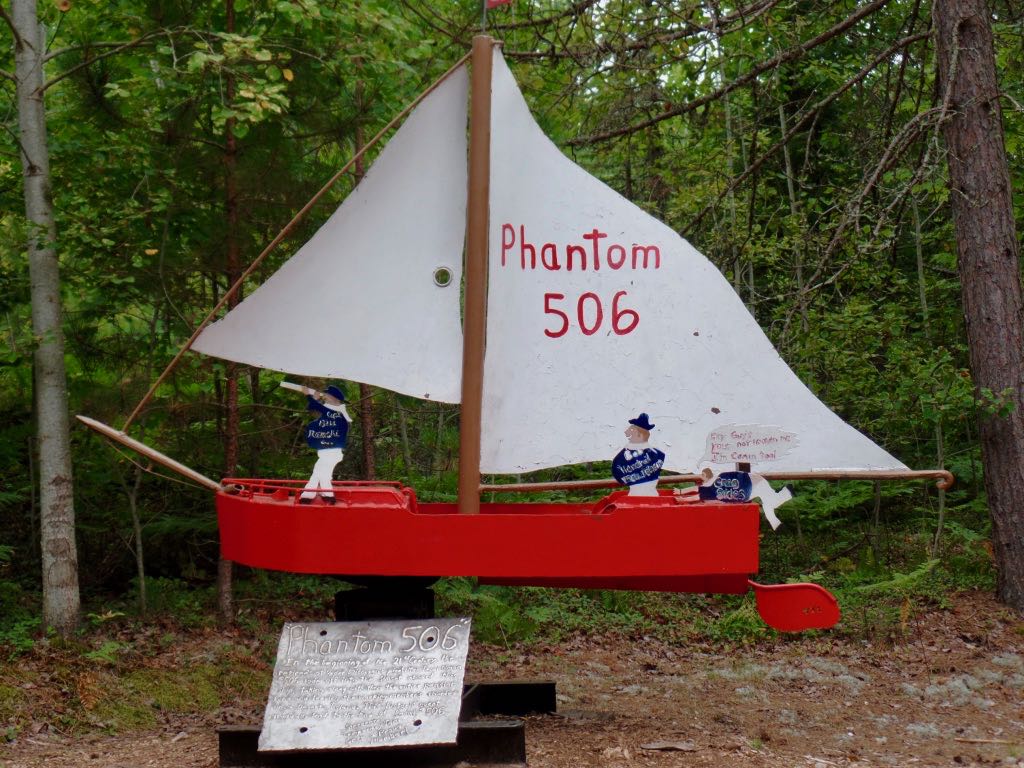 More political art: the Phantom 506 sailboat. And what does that signify? ... Just a moment and we'll see.