bunny_hugger's parents had the same computer, a Mac Mini, for eight years. It started making enough noises to worry them. It might just be the fan going, it might be the hard drive going, whatever. It was too much noise for a computer. So, and despite the pandemic lockdown, they ordered a new computer.

bunny_hugger ordered it, but subject to their constraints and budget. They wanted a new Mac Mini, her father again rejecting a laptop as too complicated(?). And in budget, which was a little tricky: it's always good to have more memory, yes. But the change from real to solid-state drives shrank the default hard drive space in these things, unless you spent more. They agreed to spend more and got a solid-state drive as large as their old spinny hard drive.

That left installation. We wanted them to install the new computer themselves, on the grounds that there's a pandemic on and it should just be a matter of plugging things in and running the restore-from-your-Time-Capsule option when the computer sets up. They insisted they couldn't possibly do that, and after some agony we relented. We drove down, intending to wear our face masks while inside and to spend as much time as possible outside and physically distant from them.

And, it hurts to say, her parents were right. They would have been overwhelmed installing and setting this up themselves.

bunny_hugger and I were nearly enough overwhelmed and I cannot truthfully say neither of us raised our voices during the process. It was a bunch of nagging little issues, many of which we could cope with, such as that the abundant USB ports of a 2012-era computer have given way to a couple USB and abundant Thunderbolt ports. And then a lot of entering half-forgotten passwords to let Gmail and all know that everything's legit. Restoring from the backup took a dreadfully long time, too, long enough that we actually went home, to bed, and came back the next day to wrap things up.

bunny_hugger's mother is still upset about the (necessary) abandonment of Picassa in favor of Apple Photos, as photo-editing software.

bunny_hugger is none too happy with it either. We are definitely going to do some tech-support-over-Facetime sessions before things are stabilized again.

So let's look back at amusement parks. Have you seen enough of Michigan's Adventure? No, not yet. More from our August 2018 visit, before we even get to dusk: 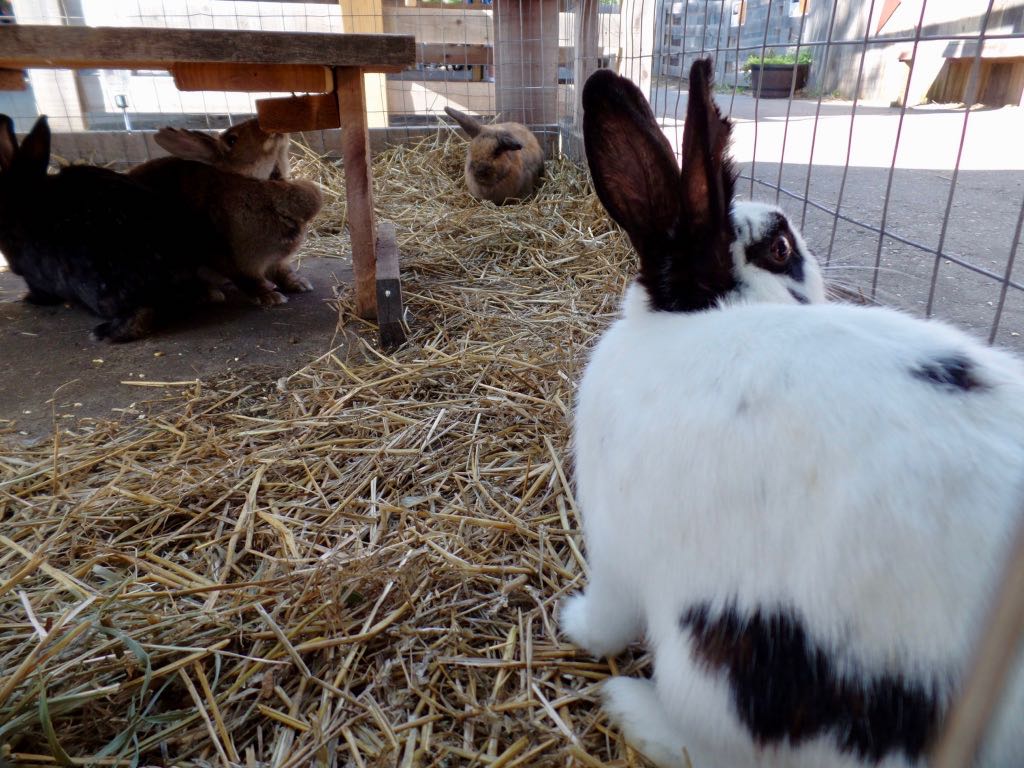 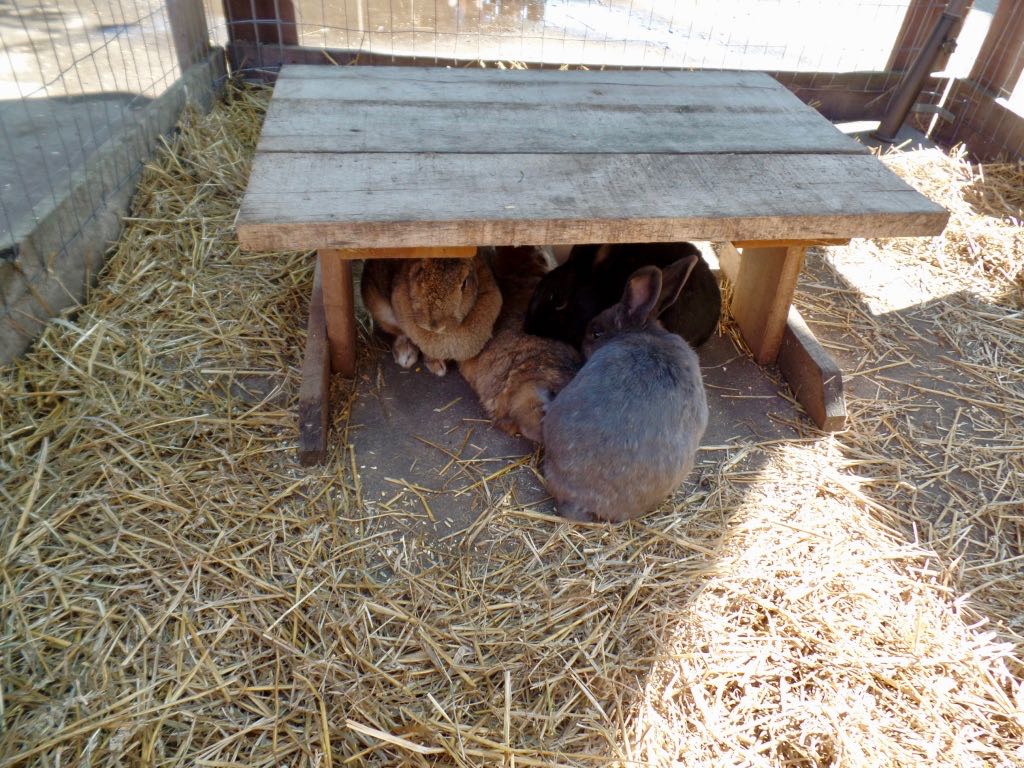 And now the rabbits gather under the table for a high-level conference. We were so relieved the first time we visited when they had this shade and shelter from grabby human hands. 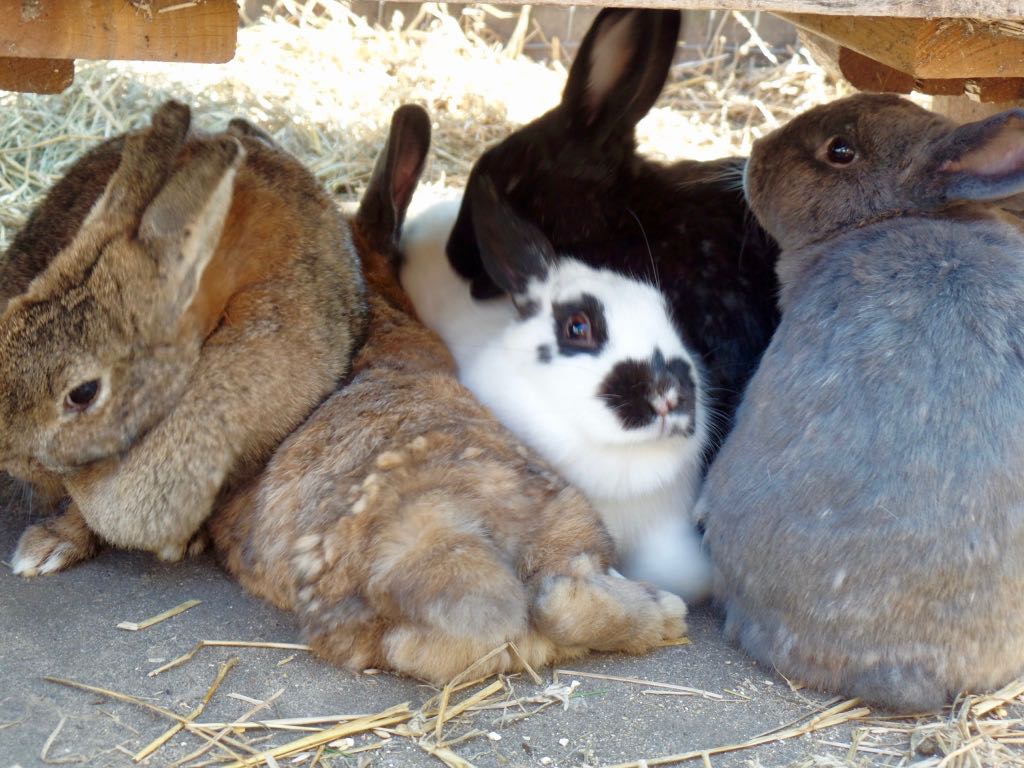 ``Can I help you?'' Four rabbits give us some serious eye while the last just gives us the tail. 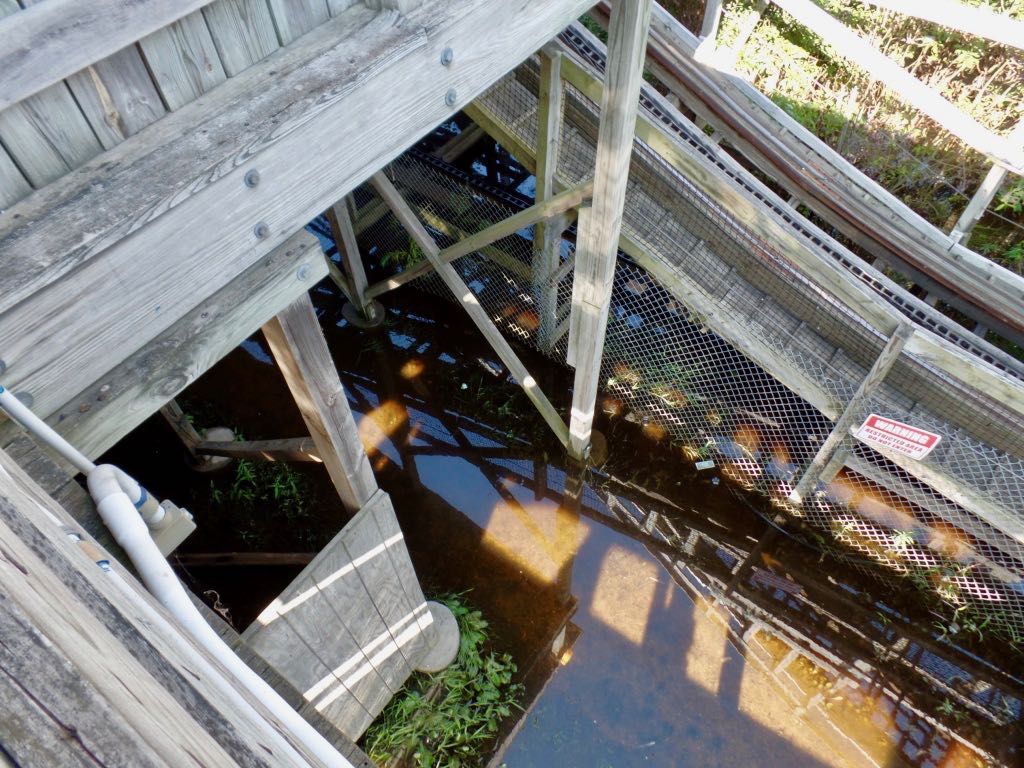 Wolverine Wildcat is not built in the water. Except that this week it was. It had rained mightily the last several days and a couple corners of the park were flooded. 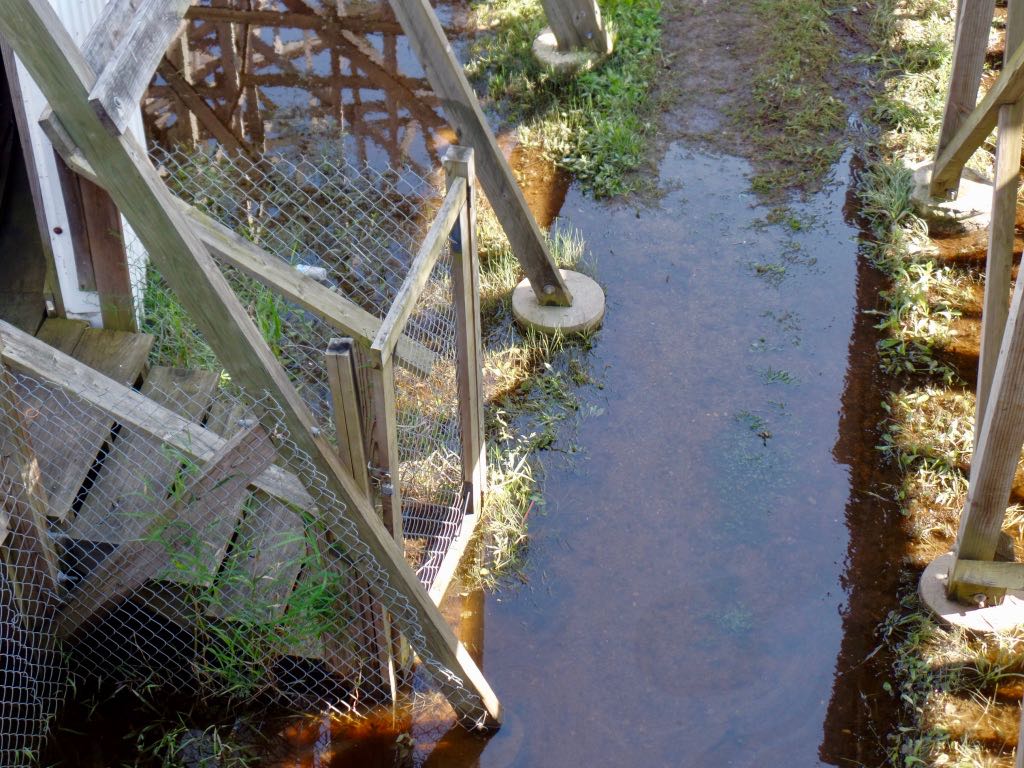 Foundation posts for Wolverine Wildcat, with the water creeping up on them. 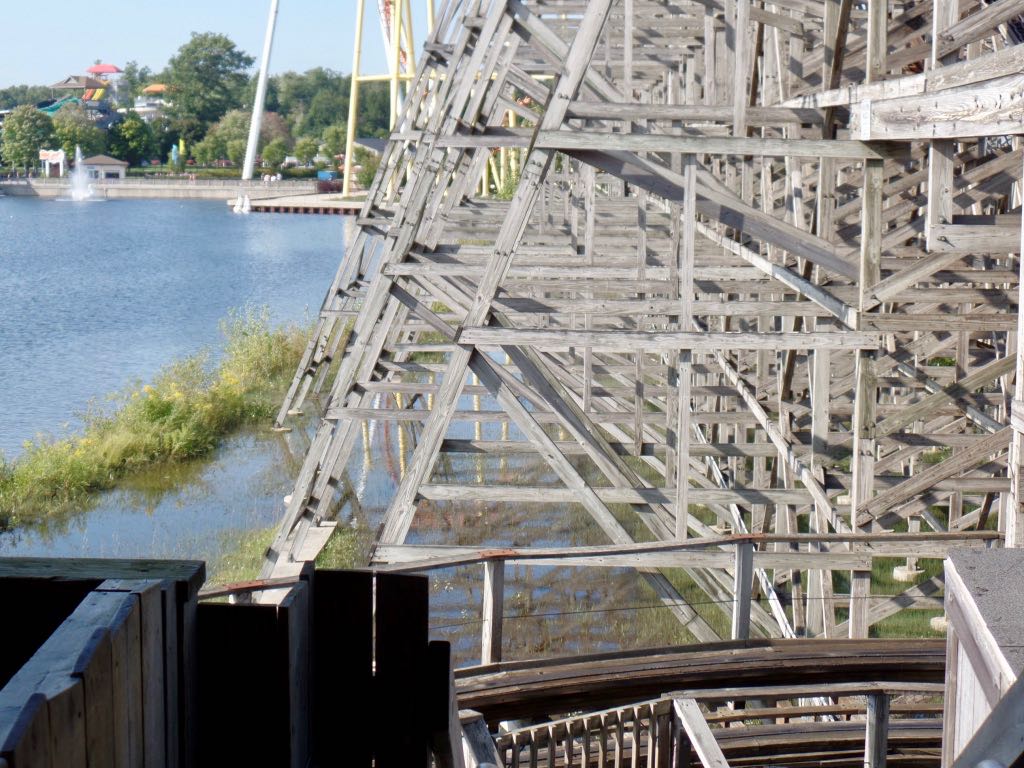 Wolverine Wildcat is next to the park's central lagoon so the flooding could be expected. It still looks quite natural like this. 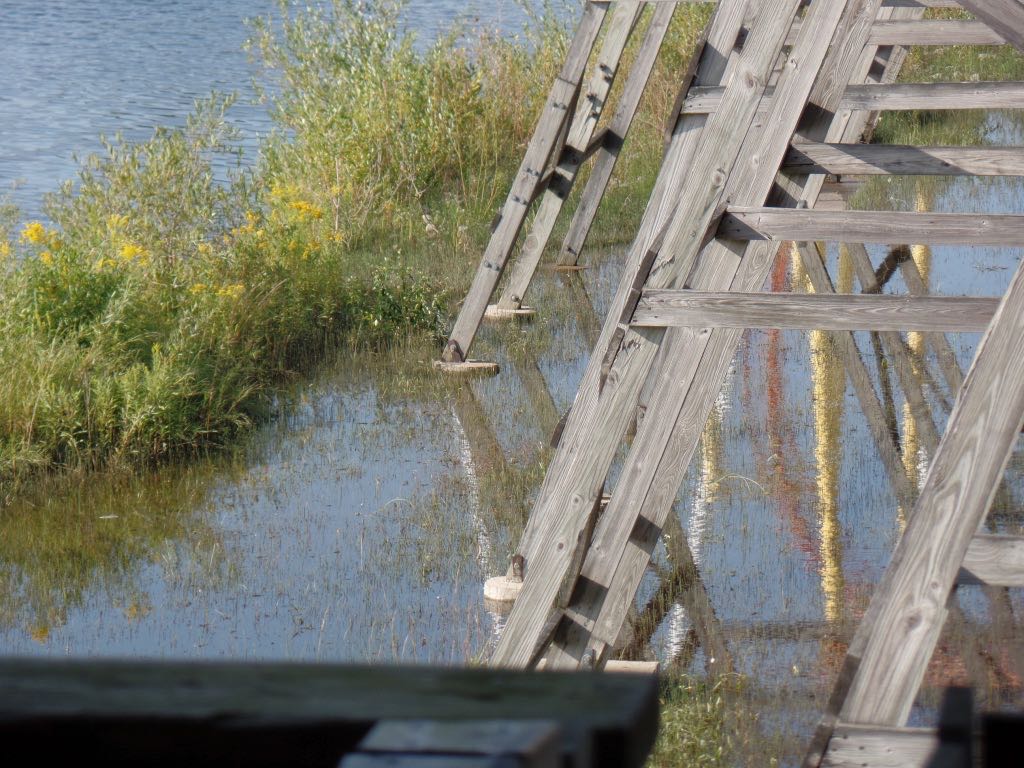 The flooded base of Wolverine Wildcat and reflections of Thunderhawk see in the water. 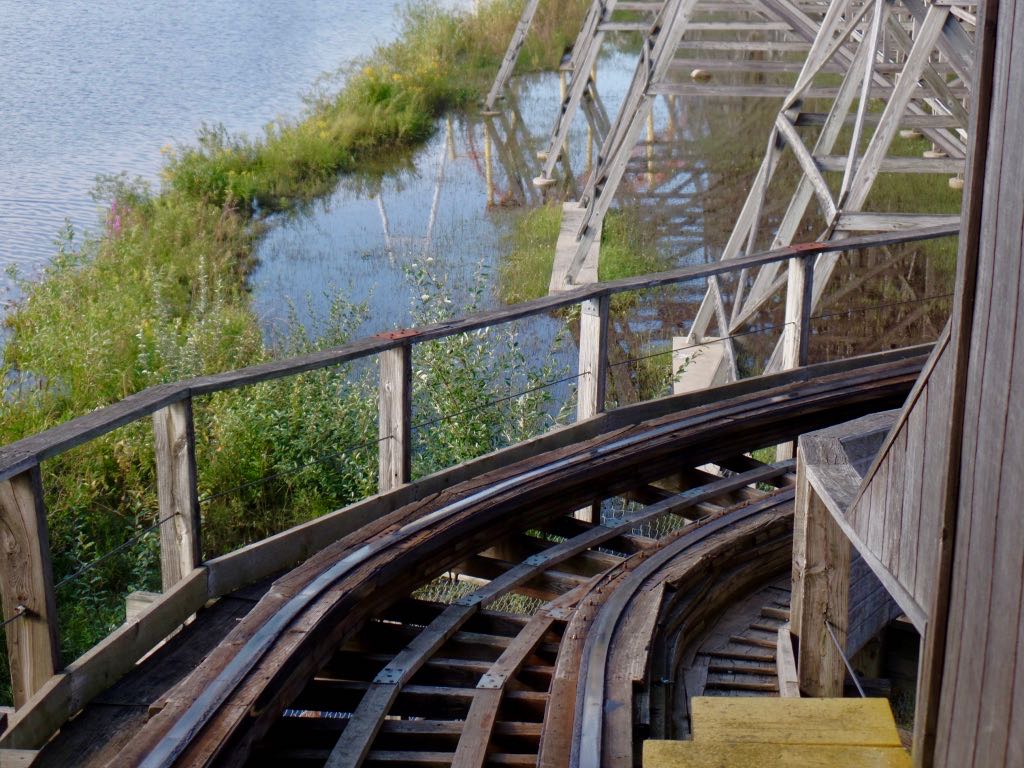 The turn out of the station on Wolverine Wildcat, with the water and reflections of roller coasters behind it. 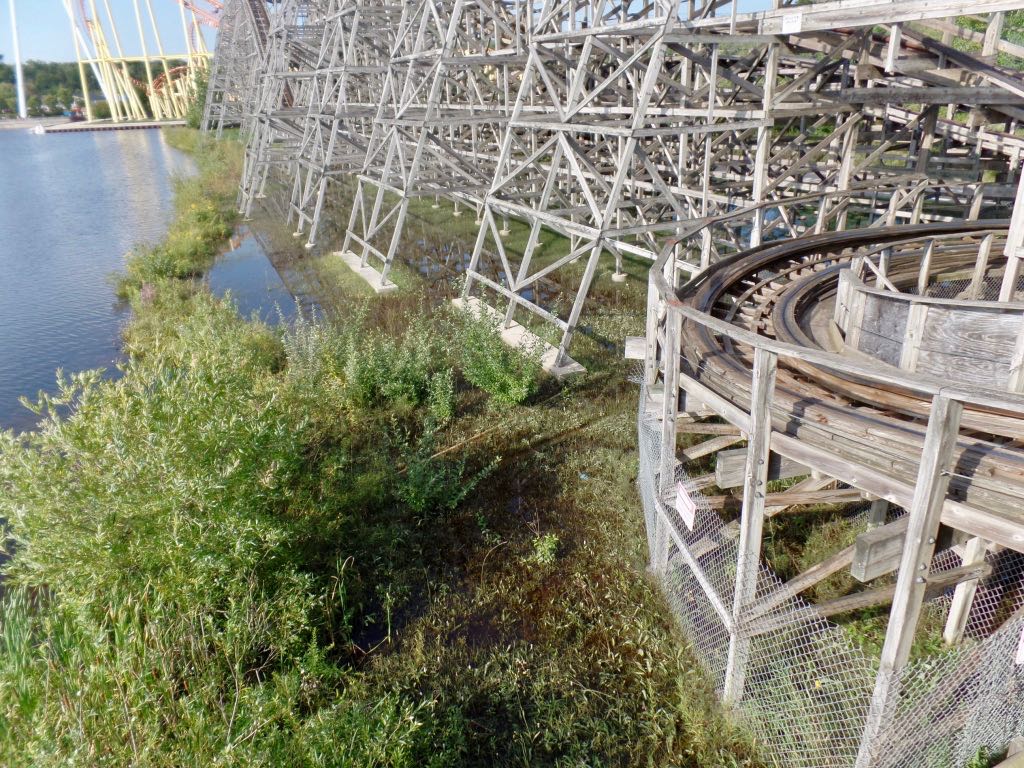 Looking again at the flooded base and lift hill, from the other side of the station. The ride was running as normal, I should mention. 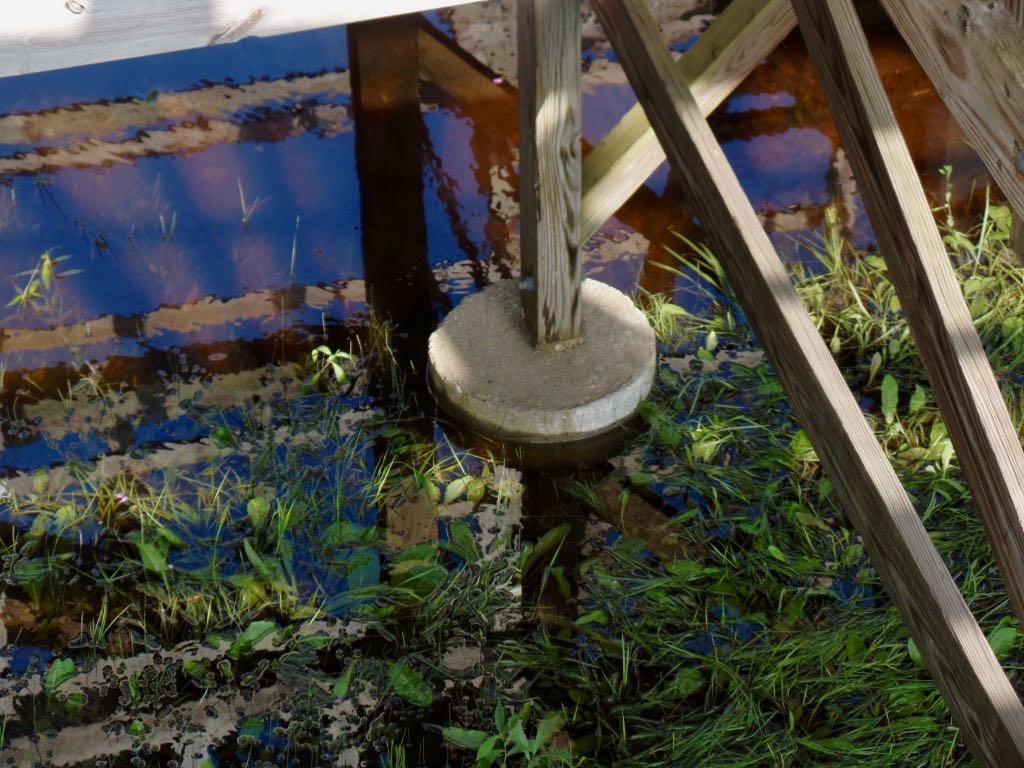 But, boy, isn't that a great collection of colors? 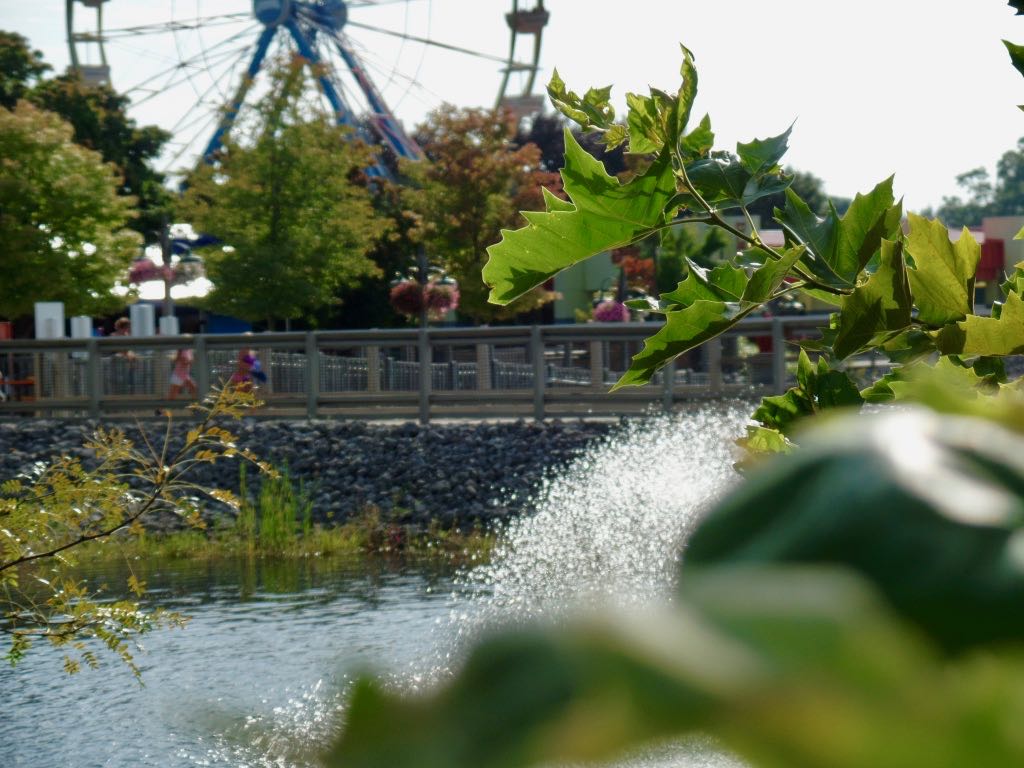 Apparently this trip I tried to be artistic. Here's a close-up picture of some shrubs while the lagoon's fountain sprays behind, and the Ferris Wheel exists in the far background. I don't usually have four planes of detail in my pictures. 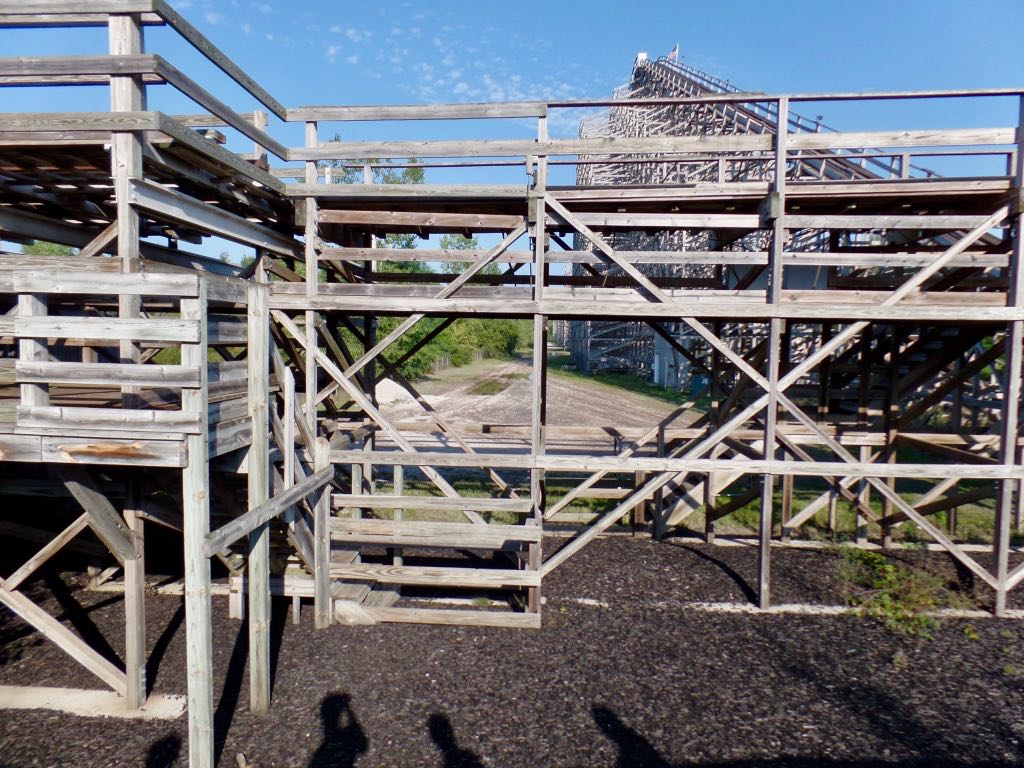 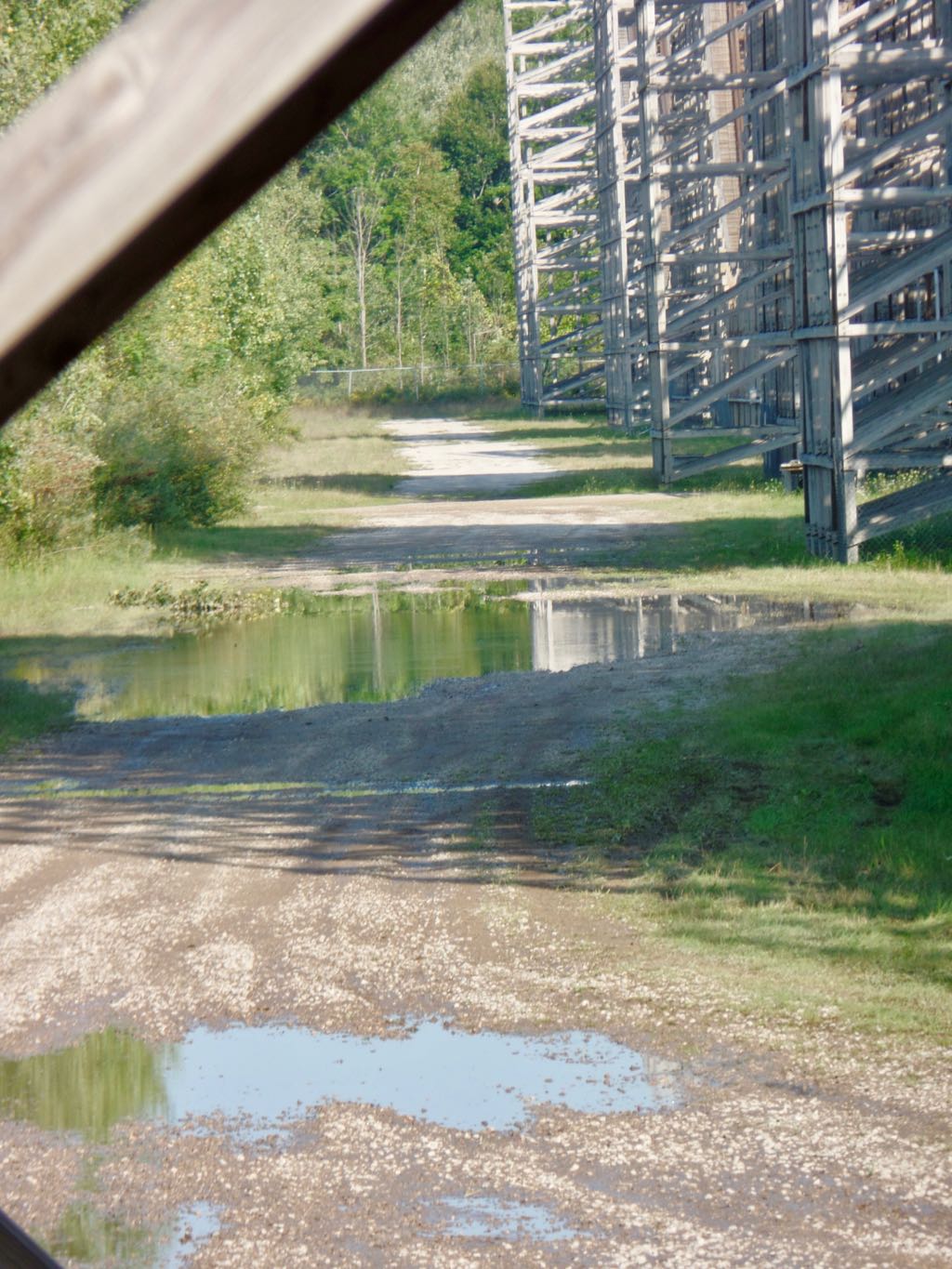 Though it's much farther from the lagoon there's still some flooding around the roller coaster's side. 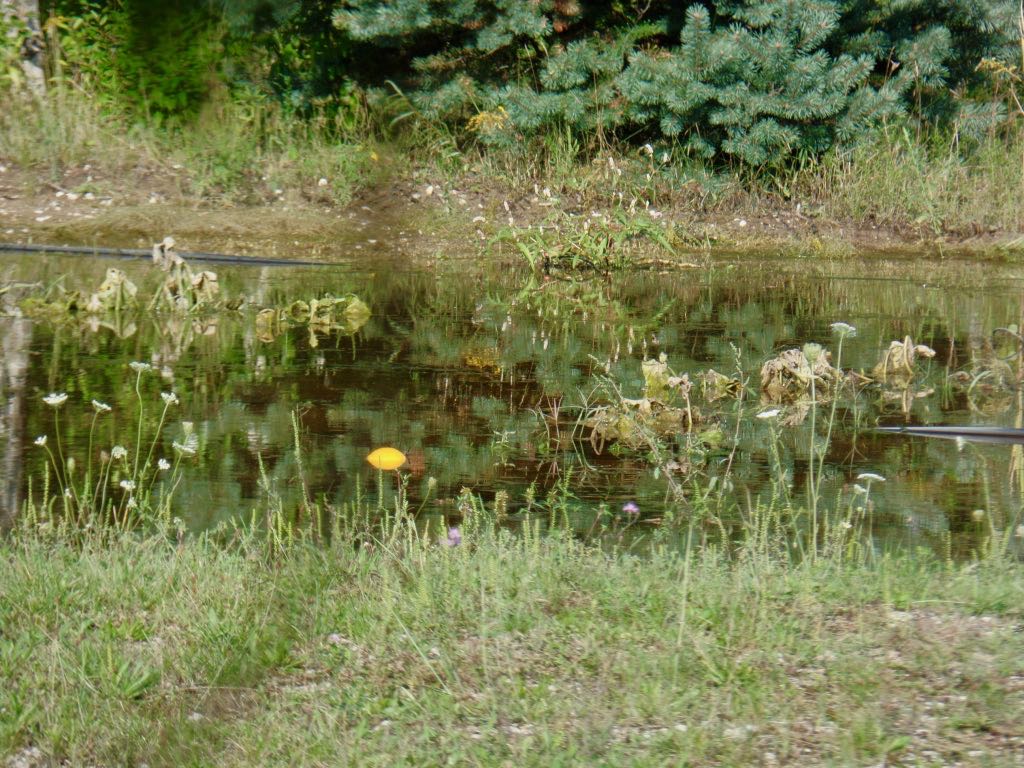 The pumpkin patch looks pretty well flooded. I forget whether they had pumpkins growing in it that year; they didn't have any in 2019. The big orange spot suggests they had or at least left one pumpkin ungathered for whatever purpose the park was growing pumpkins. Michigan's Adventure doesn't do anything for Halloween. A look at two of the park's bread-and-butter rides: the Scrambler, which everyone who goes to an amusement park likes riding, and the Thunder Bolt, which they don't run backwards even though it's designed to ride like that. 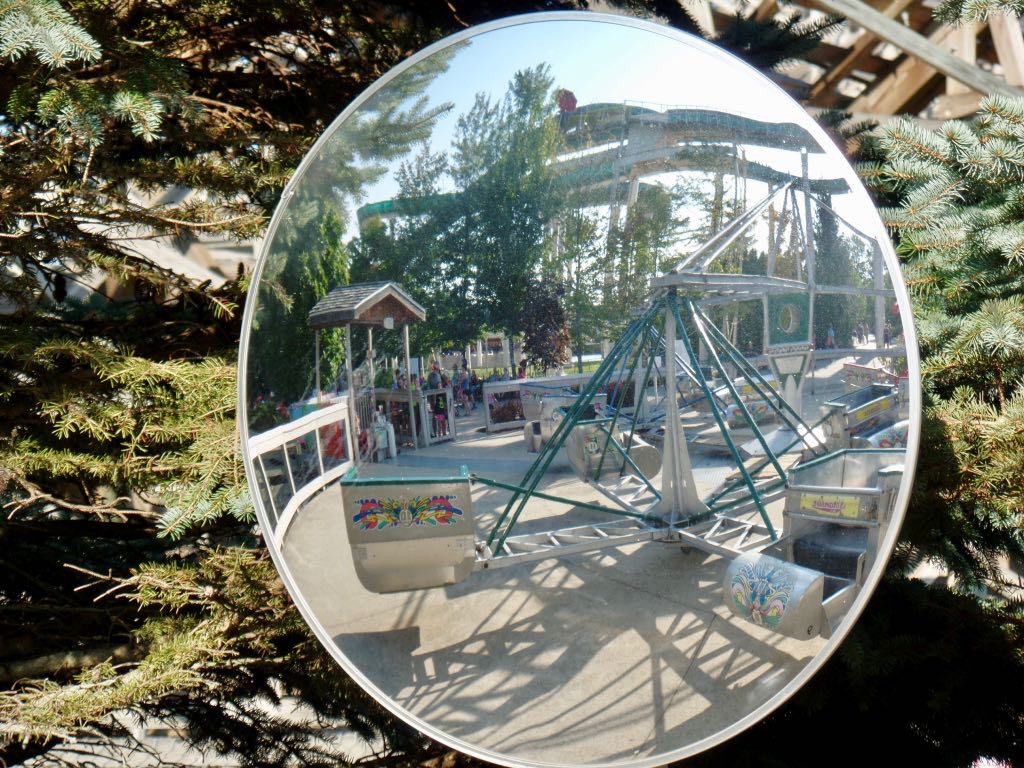 The Scrambler as seen in one of the safety mirrors. I told you, I did a lot of arty shots this trip.

Trivia: In 1817 a religious sect, followers of Joseph Bimeler, migrated from Bavaria to Philadelphia. Quakers loaned the group money which Bimeler used to establish a community called Zoar, in eastern Ohio. Source: Waking Giant: America in the Age of Jackson, David S Reynolds.

PS: Reading the Comics, May 15, 2020: Squared Away Edition and another week's worth of comic strips are, as the edition title says, squared away.

PPS: What's Going On In Dick Tracy? How was Shaky's extortion of Tess Tracy supposed to work? February - May 2020 plot in review.