With this, finally, I close out the late night at Michigan's Adventure, and August 2018. See if you can guess what's up next: amusement park or pinball thing? Good luck! 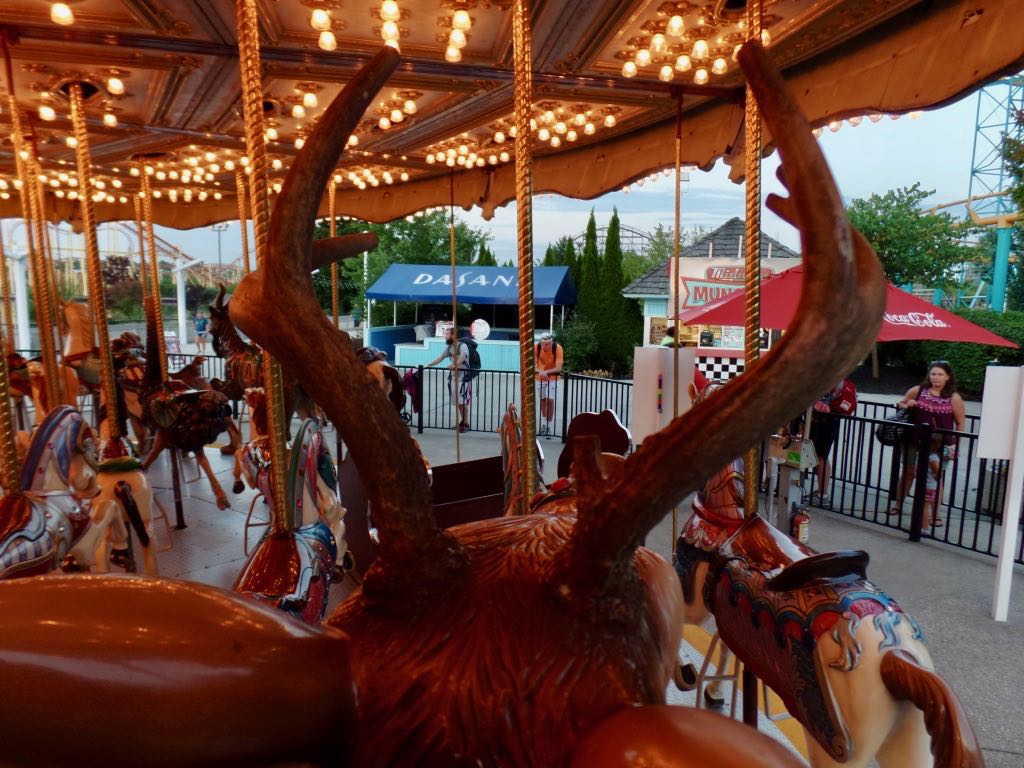 Antlers on the Chance carousel's deer. Though the figures are all fiberglass (that's how Chance rolls) the antlers are real deer antlers, since the real things are abundant and more durable than synthetic replicas. The ride operator told us a story of those antlers coming from one of the deer that used to be at what used to be Deer Park Funland. We agreed that was amazing but didn't believe him. 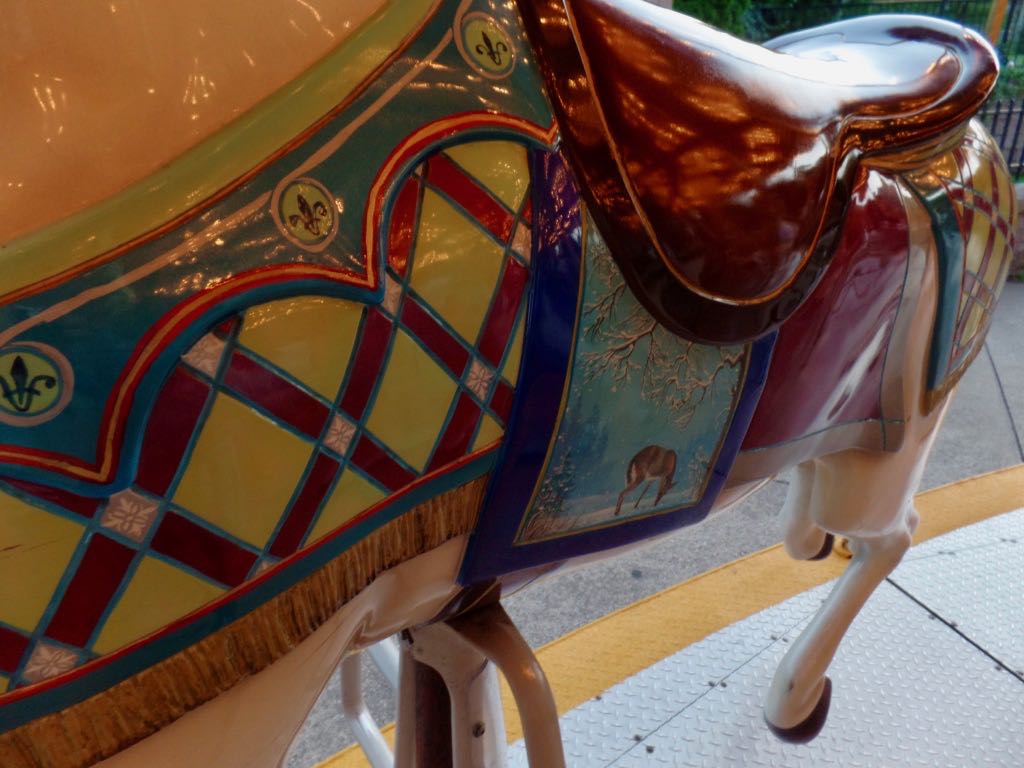 Saddle blanket on the inside of one of the carousel horses. On a carved antique it'd be unlikely for this side to be painted so elaborately, as this would do nothing to attract patrons, but I guess it's as easy to paint a fiberglass carousel ornately as simply for some reason. 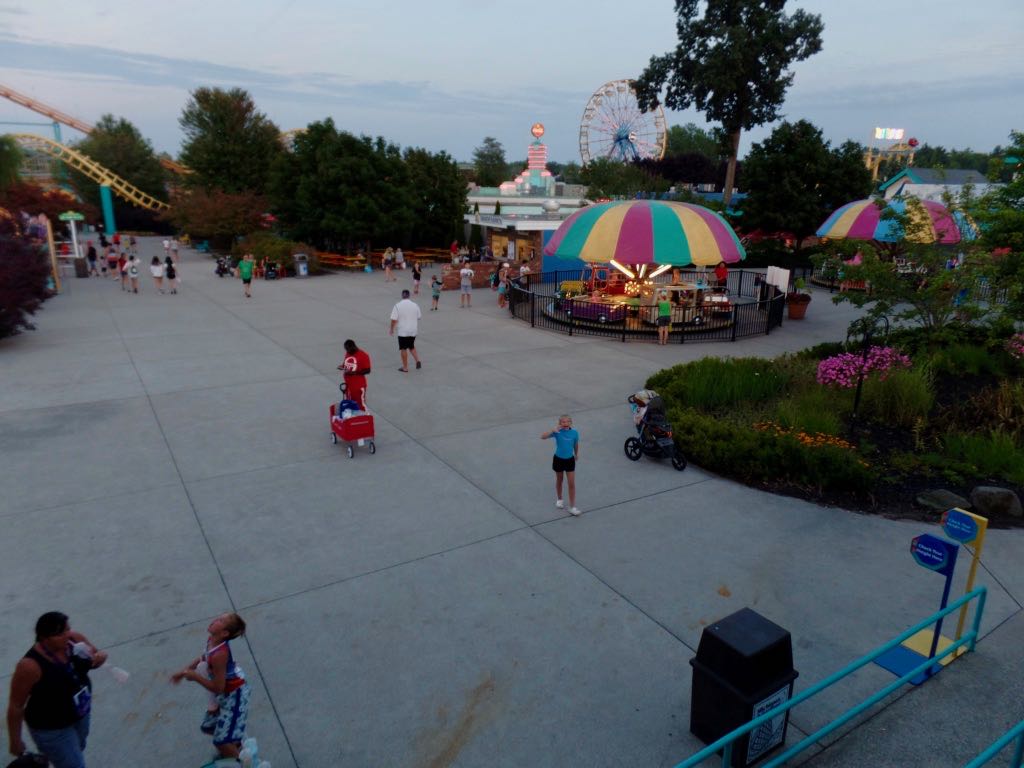 Looking out over the western midway as night sets in. To the left of the screen is where they're putting in the Camp Snoopy attraction. 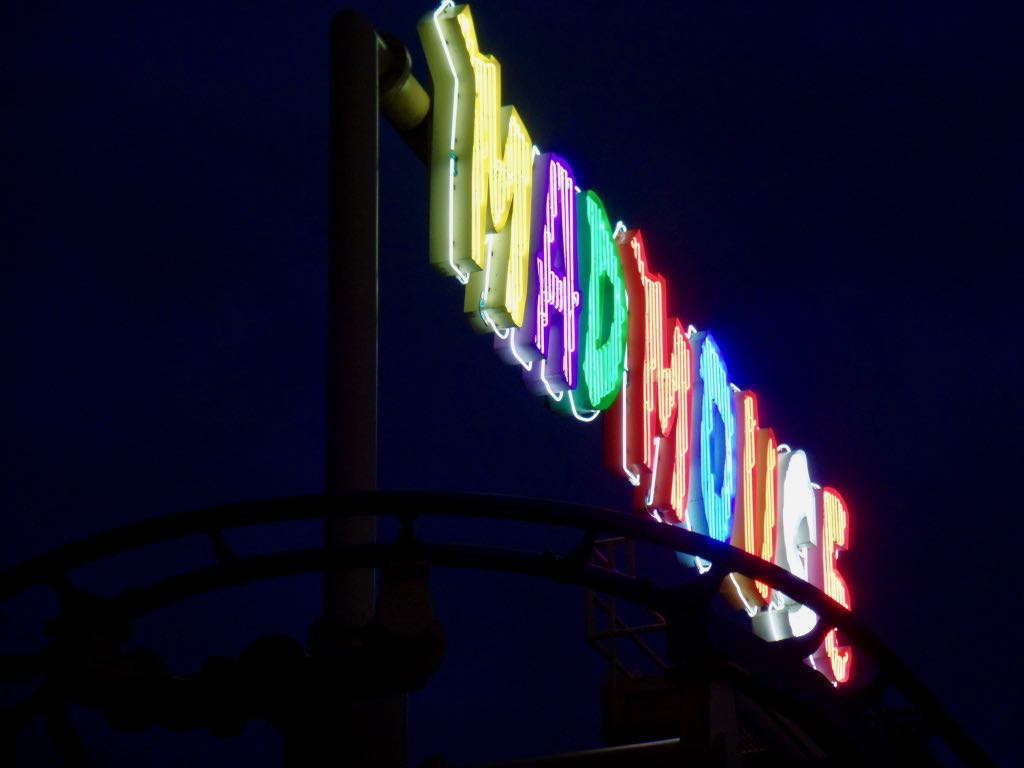 Finally, nightfall! The Mad Mouse sign is one of the few significant lighted signs they've got, but it's a good one. 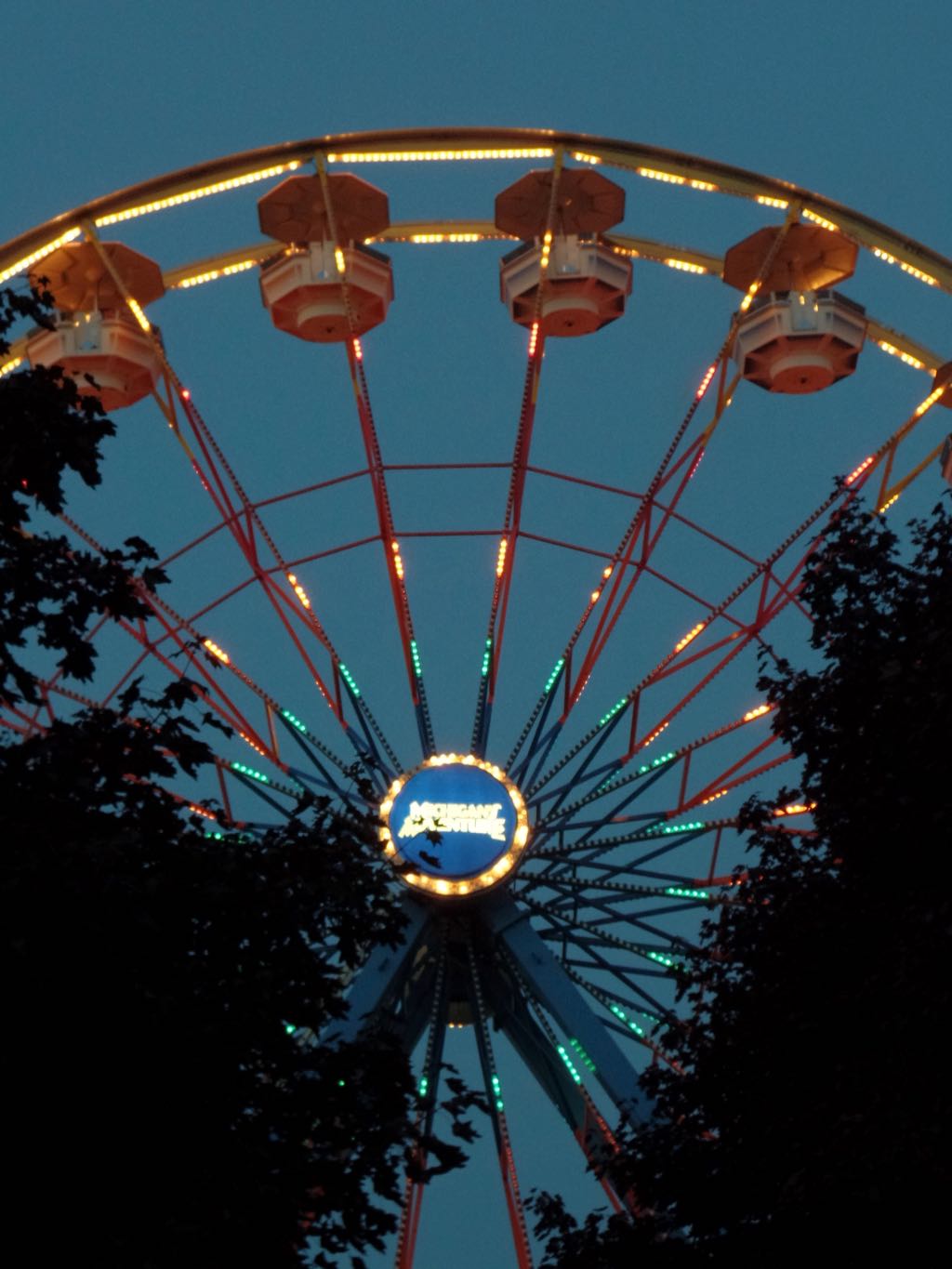 And here's the Ferris Wheel seen through trees. 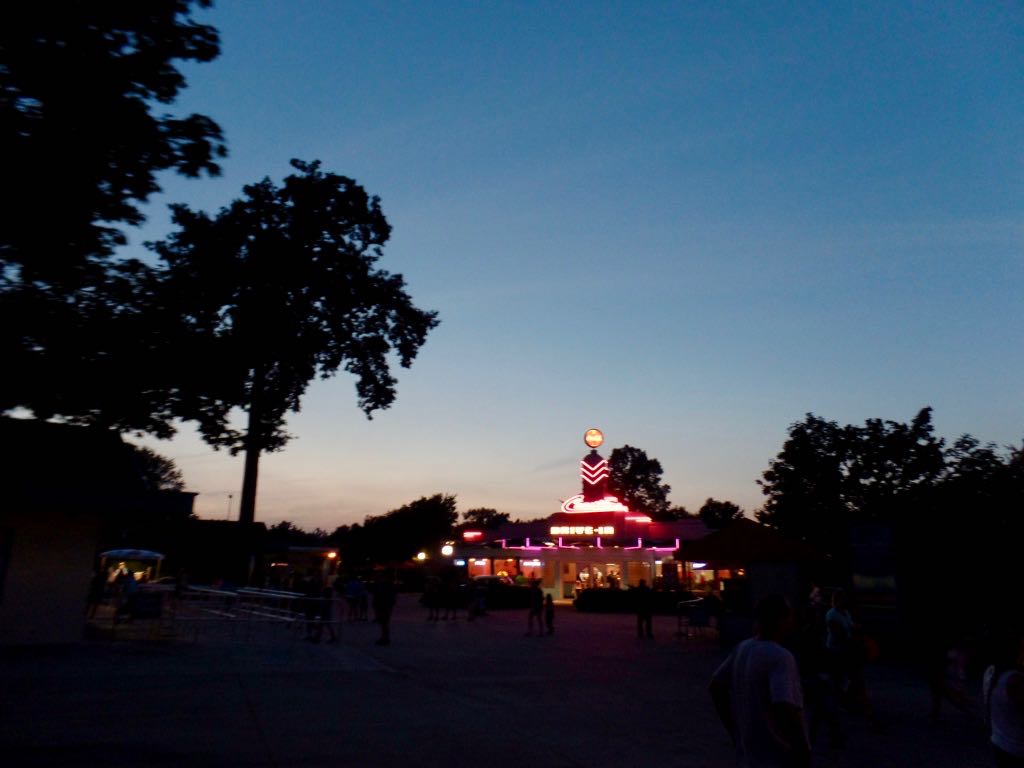 Looking back at Coasters, the only real dine-in restaurant in the park. 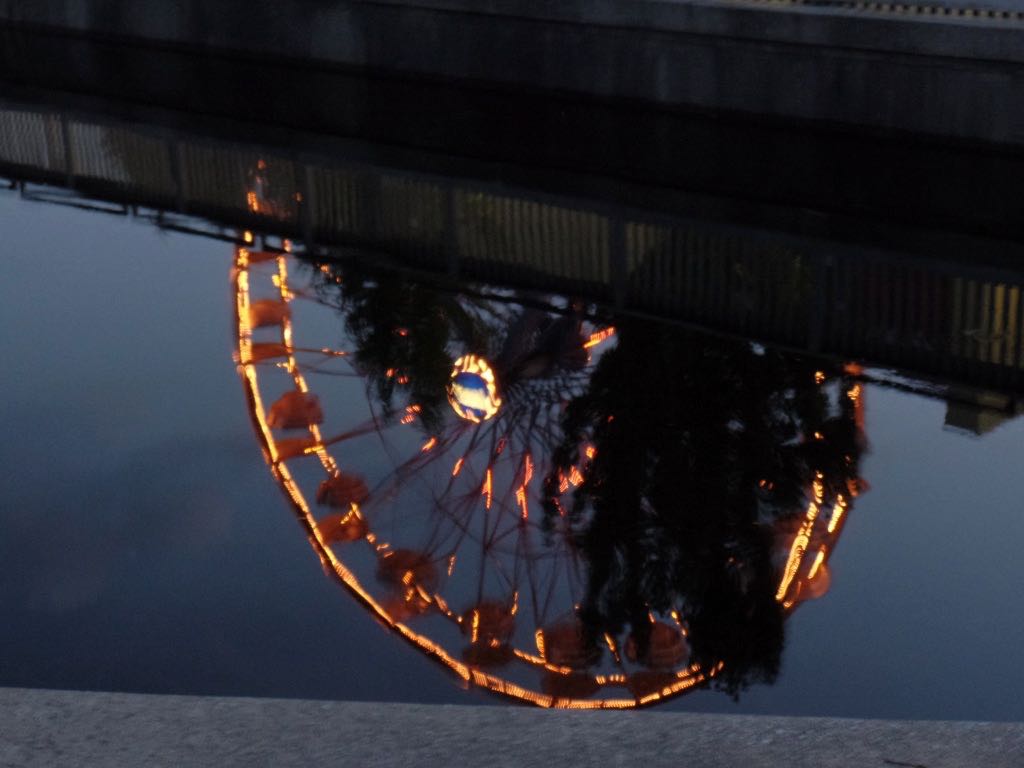 Looking at the Ferris Wheel in the reflection of a pool. 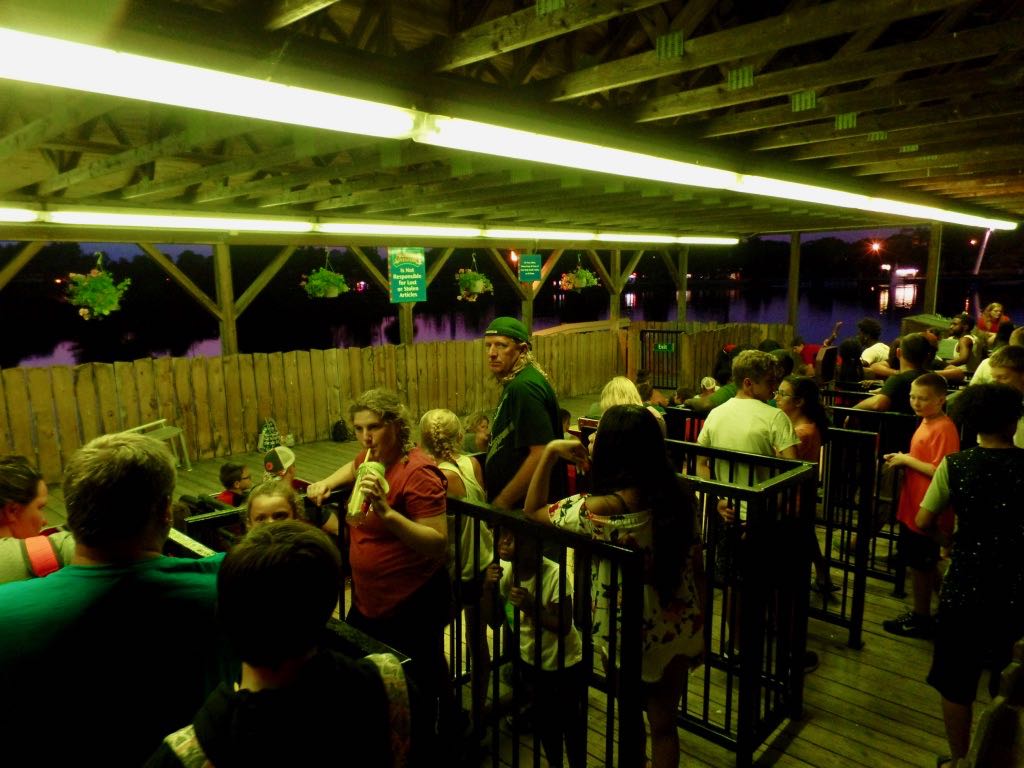 We closed the night on Wolverine Wildcat. What lighting there is, you can see, attracted the ire of that guy in the green cap. Also check out how purple this makes the sky and lagoon look. 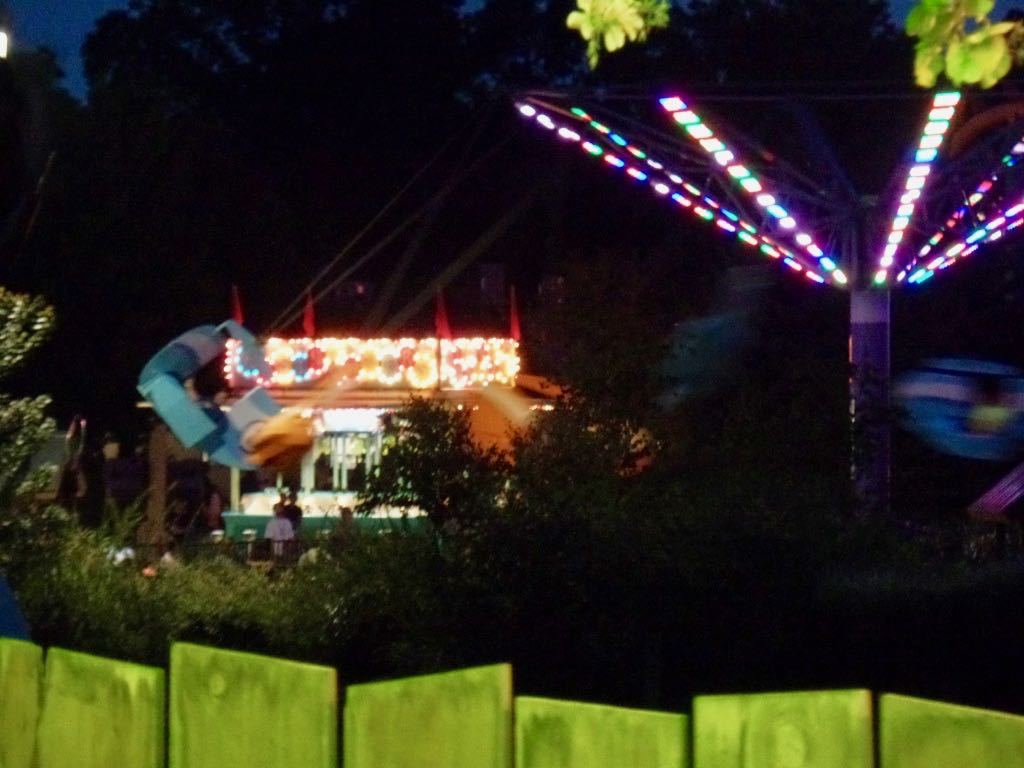 Looking from Wolverine Wildcat over at the Lakeside Gliders, a flying scooters ride put in a couple years ago. 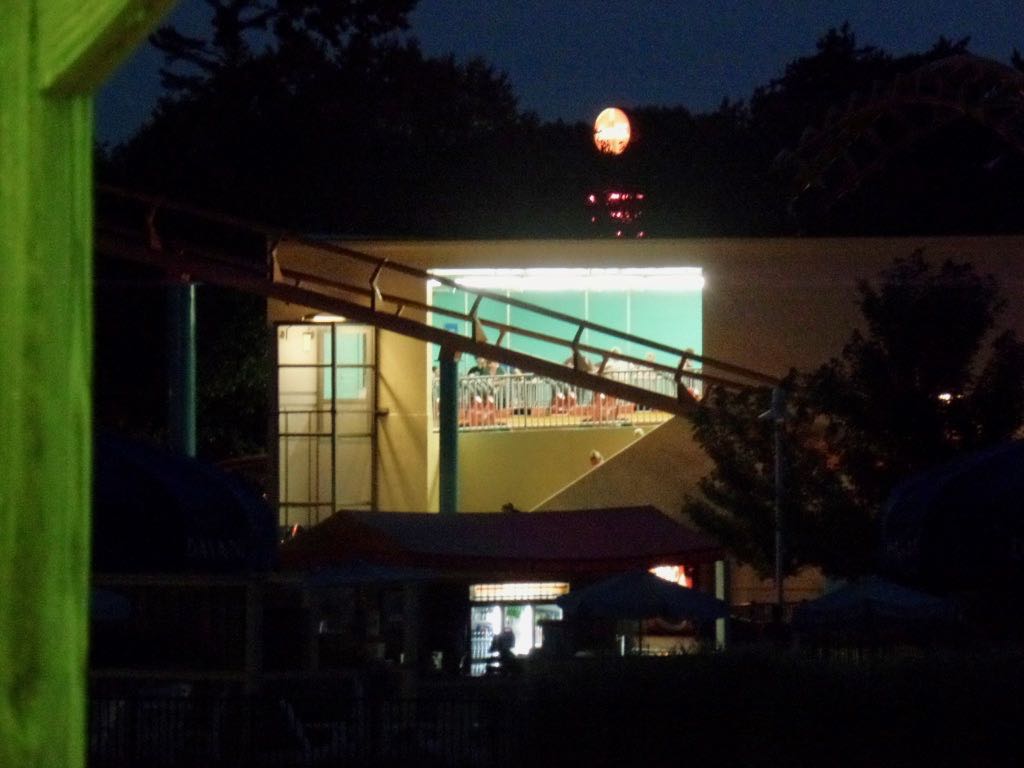 Looking from the Wolverine Wildcat station over to the Corkscrew station. Corkscrew was their first roller coaster, put in in 1979 and the Rubicon which marked the place turning from Deer Park to an amusement park. 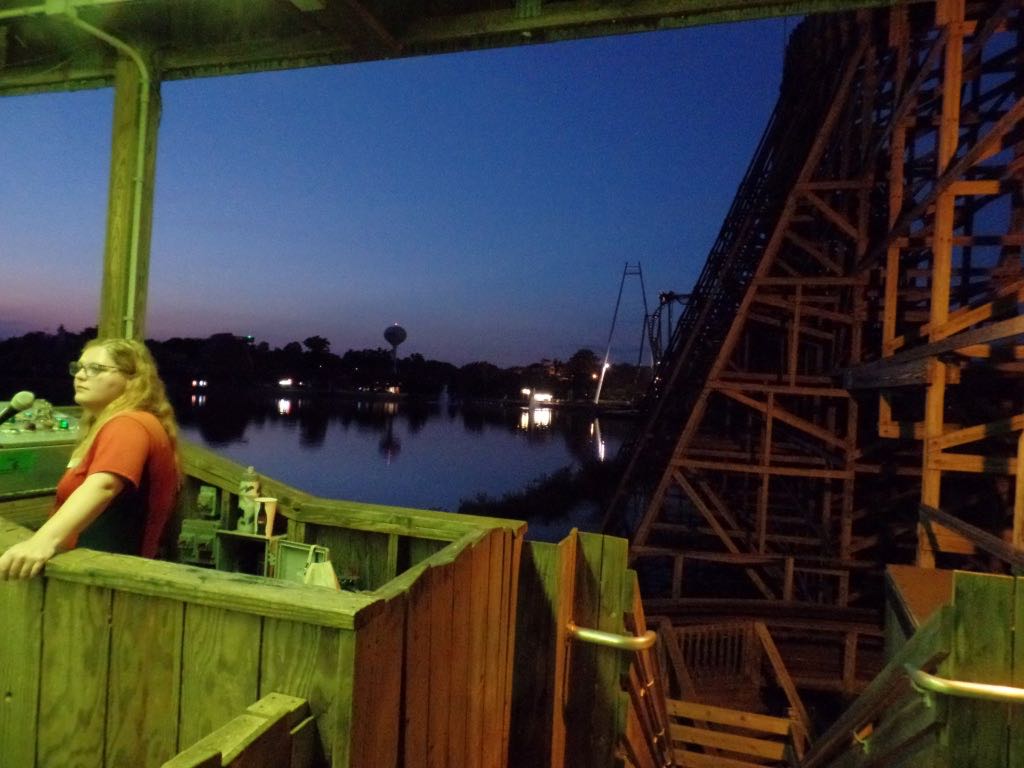 Up to the front of the Wolverine Wildcat station. Who would ever pick this array of colors? 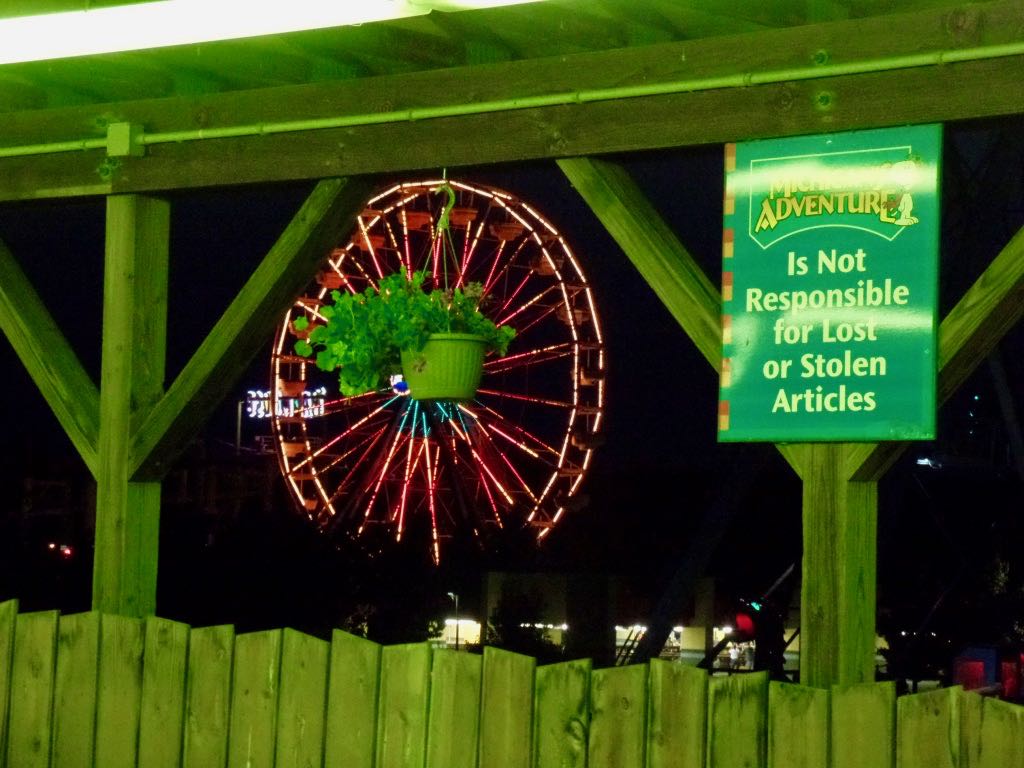 Looking through the station's lights to the Ferris Wheel and the Mad Mouse signs. 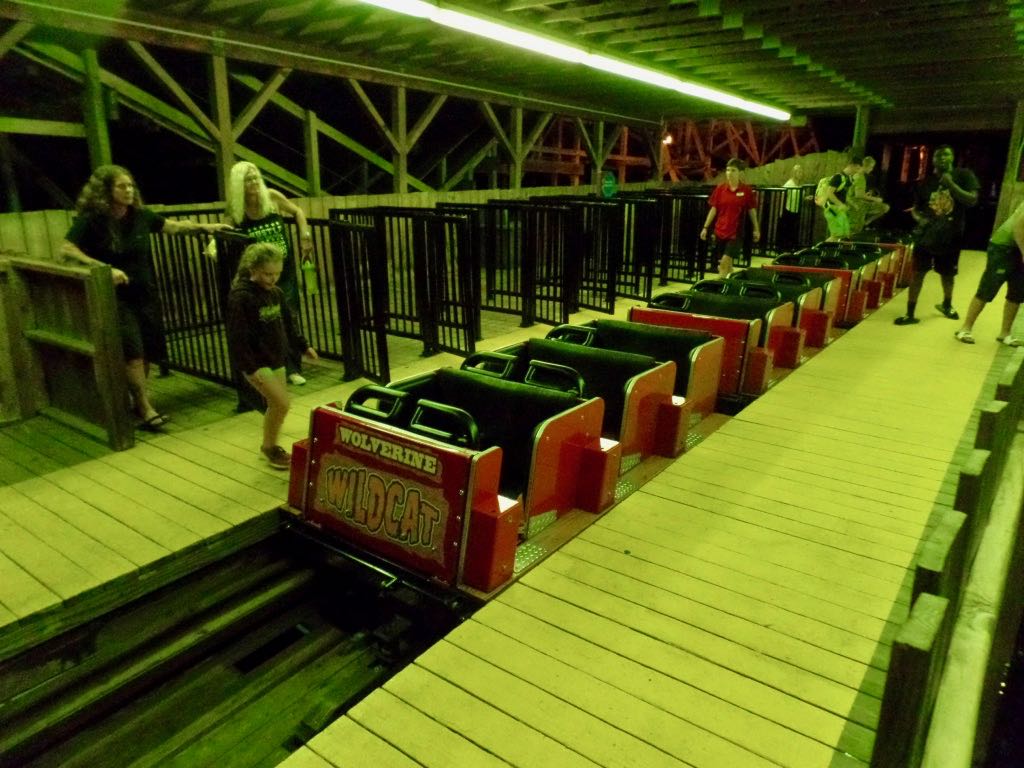 We just missed the last ride of the night! (We wanted a front-seat ride.) Ah well, at least we get to see the logo on front of the Wolverine Wildcat's lone train. 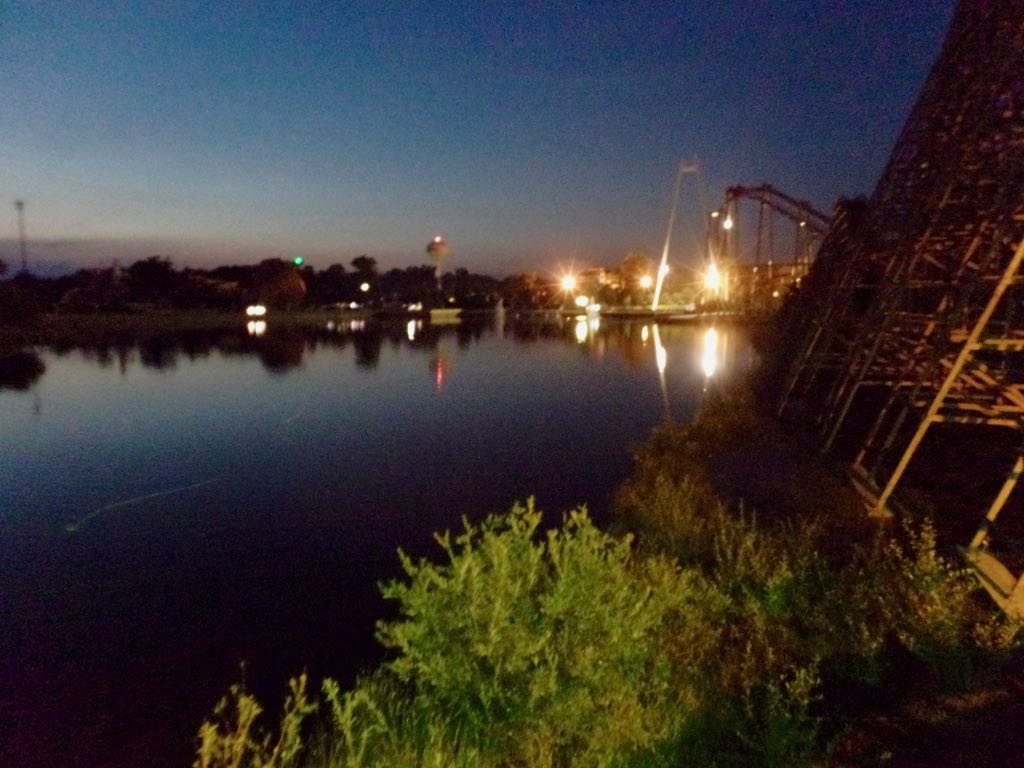 The nighttime view of the lagoon and, way off across the water, the tower for Ripcord and the Thunderhawk roller coaster. 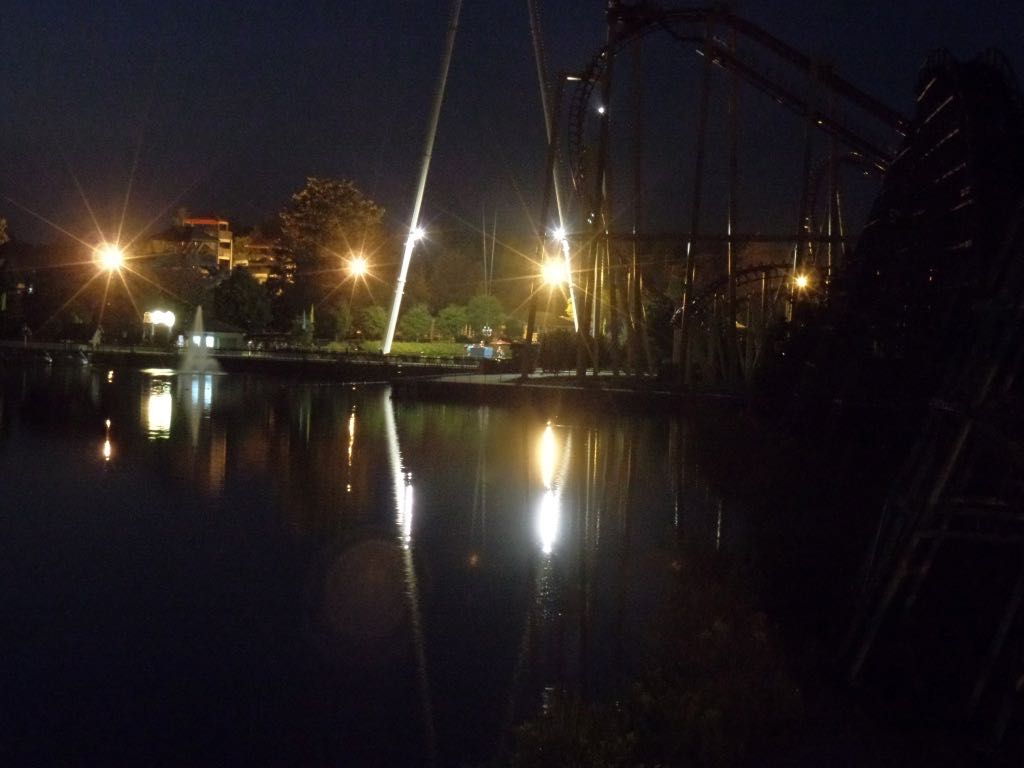 Much sharper picture of the lagoon and the tower for Ripcord, plus the silhouette of Thunderhawk, which must have shut down for the night already. 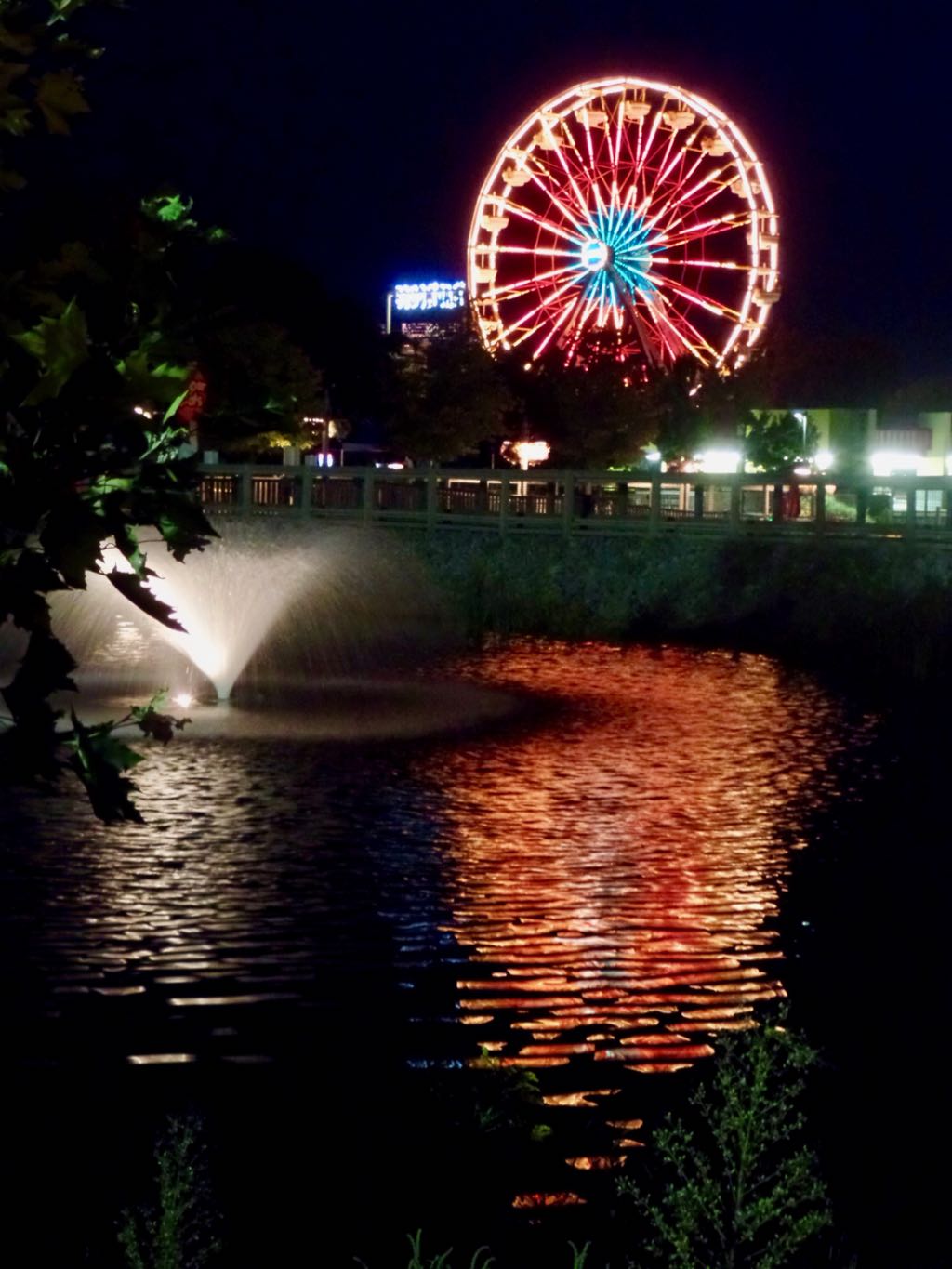 And one last night picture, looking at the Ferris Wheel and the Mad Mouse signs and their reflections.

Trivia: The first electric train line in Michigan, and the third in the United States, opened in 1886 in Port Huron. It was the first interurban system in the country. Source: Michigan: A History of the Great Lakes State, Bruce A Rubenstein, Lawrence E Ziewacz.

Currently Reading: Rising Up from Indian Country: the Battle of Fort Dearborn and the Birth of Chicago, Ann Durkin Keating.