I wonder what the dude was saying', or was he just lost in the flood?

My mathematics blog kept up its week of posting nearly every other day, like it's been at for a while. Mostly comic strips. That's going to change soon.

For my cartoon of the week? 60s Popeye: Go see Sea Serpent, you'll see it and serpent, I love it although it doesn't have enough sea serpent. 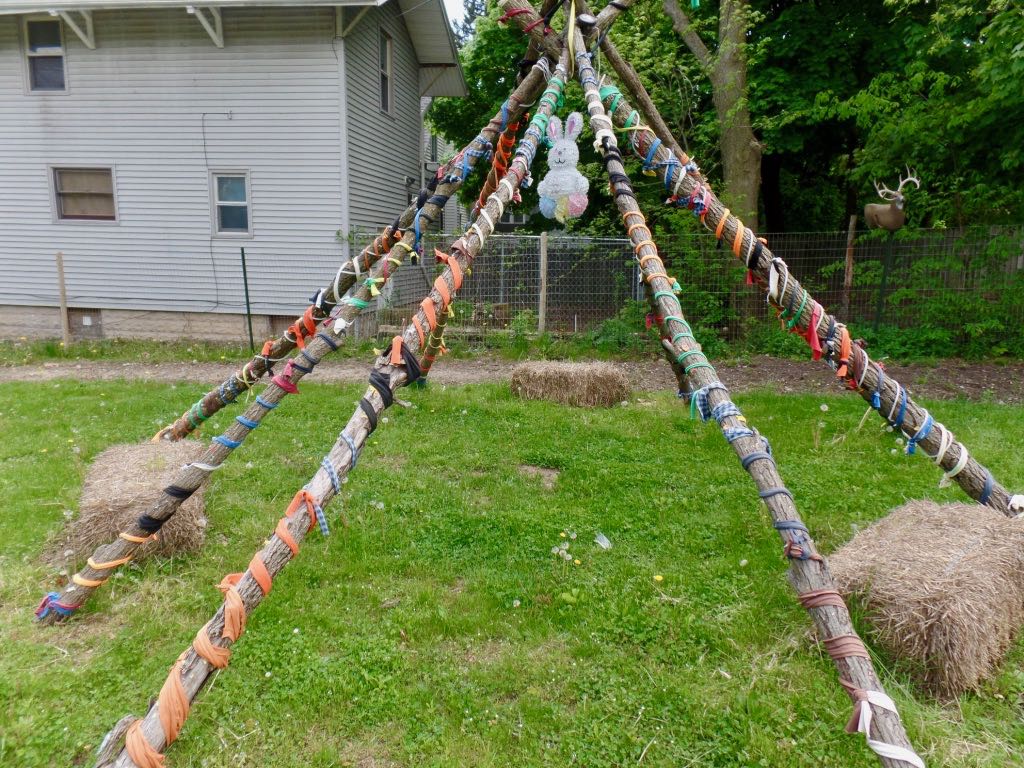 So this is not actually flooding, but this house on the major east-west street set up a pole pyramid like this and decorates it with different flowers or stuff for the different seasons. Just one of those things. I think there was supposed to be a greater purpose to it at some point. 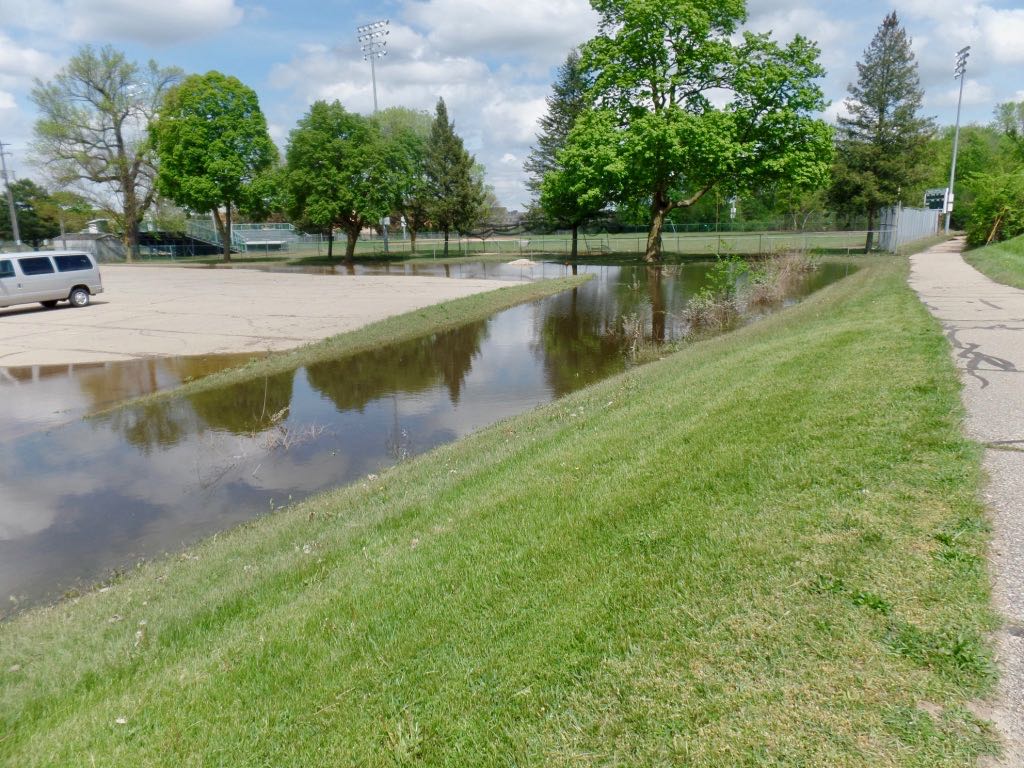 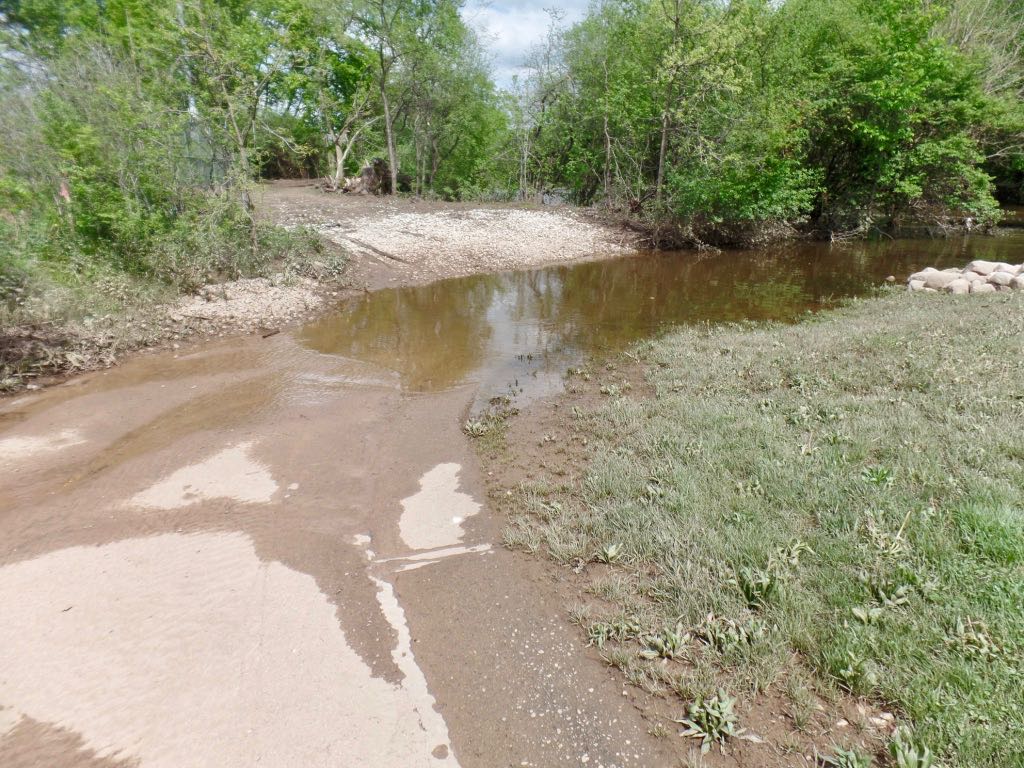 And here is the entrance, to the east, to the River Trail along the Red Cedar River. Follow that water and you could get to Kruger's Landing! 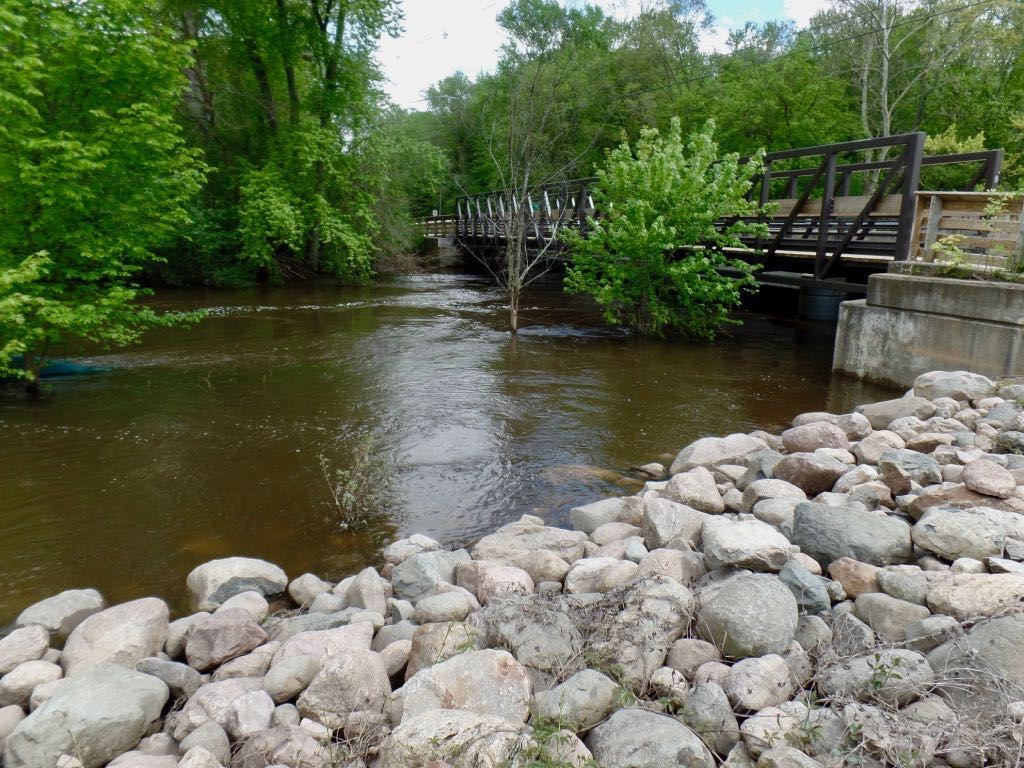 So here's the bridges --- pedestrian and vehicle --- that lead from Lansing to East Lansing. There's usually a bit more clearance on the river. 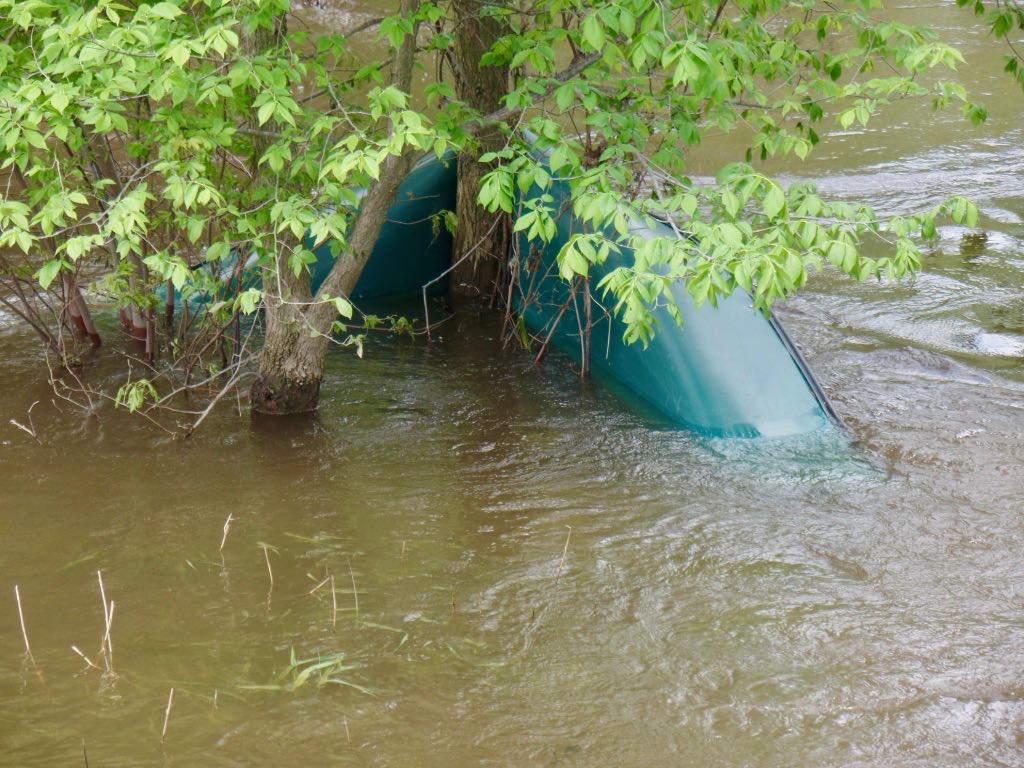 One of the trees forming a natural protective breaker against the waters. 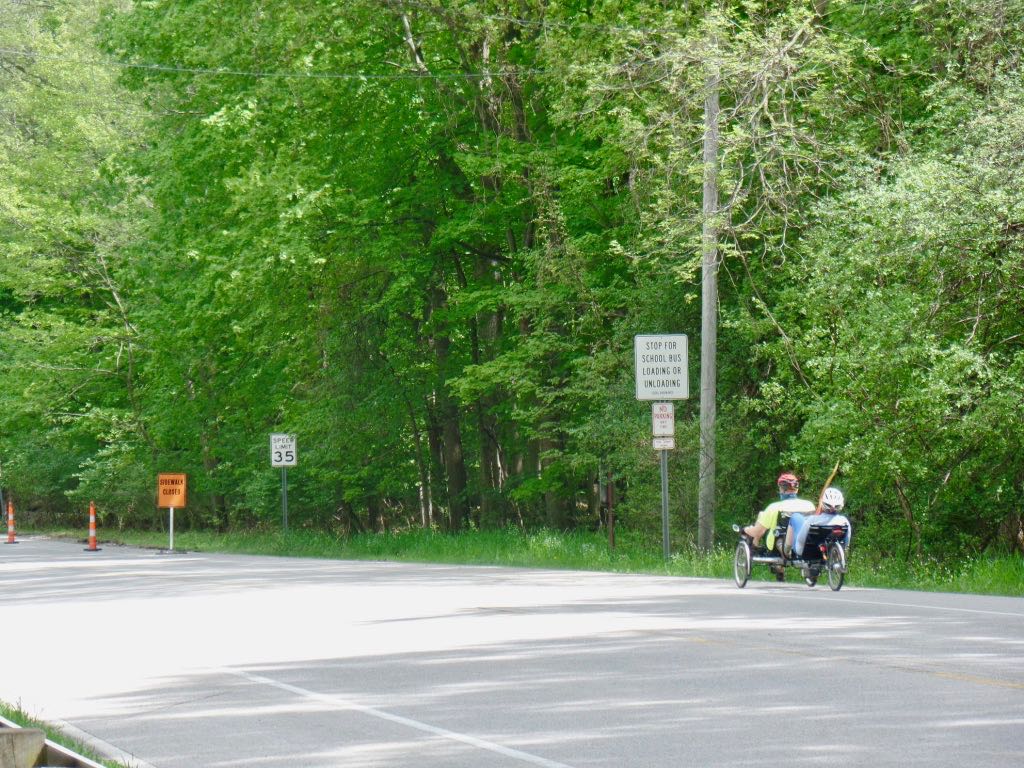 So, yeah, the neighborhood has reached the stage of gentrification where we have tandem recumbent bicycles. Anyway somewhere around here is the East Lansing city limits. 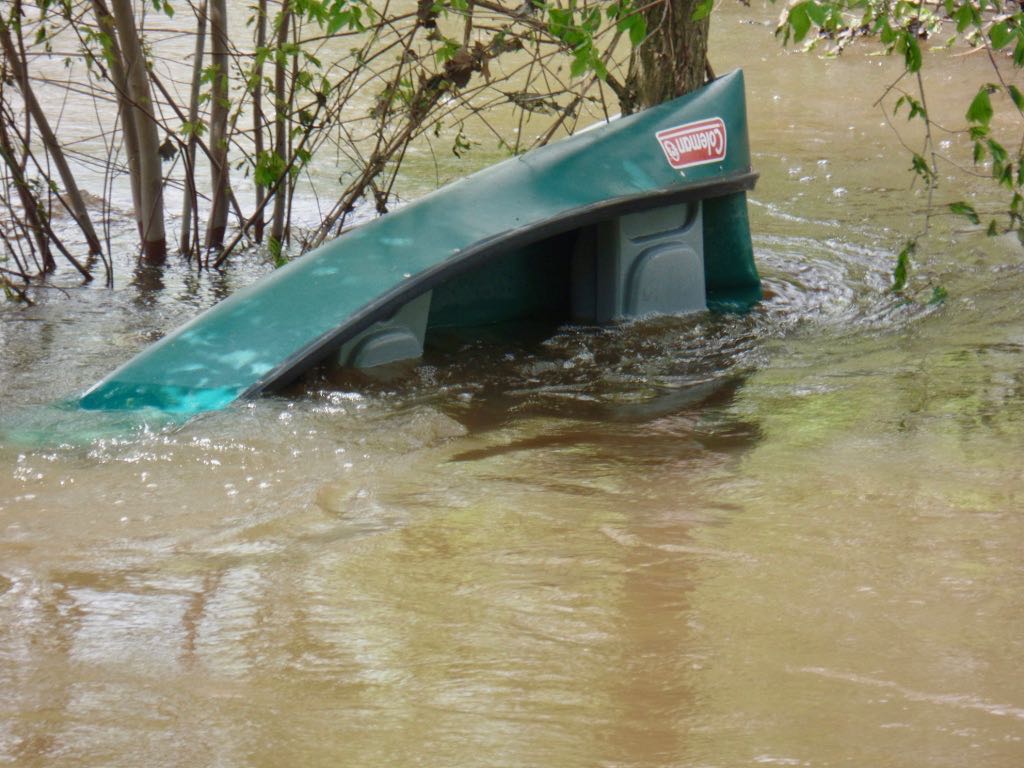 So here's that tree again. I assume someone just assumed their kayak was better-secured than it actually was but, wow, that's a heck of a strong tree then. 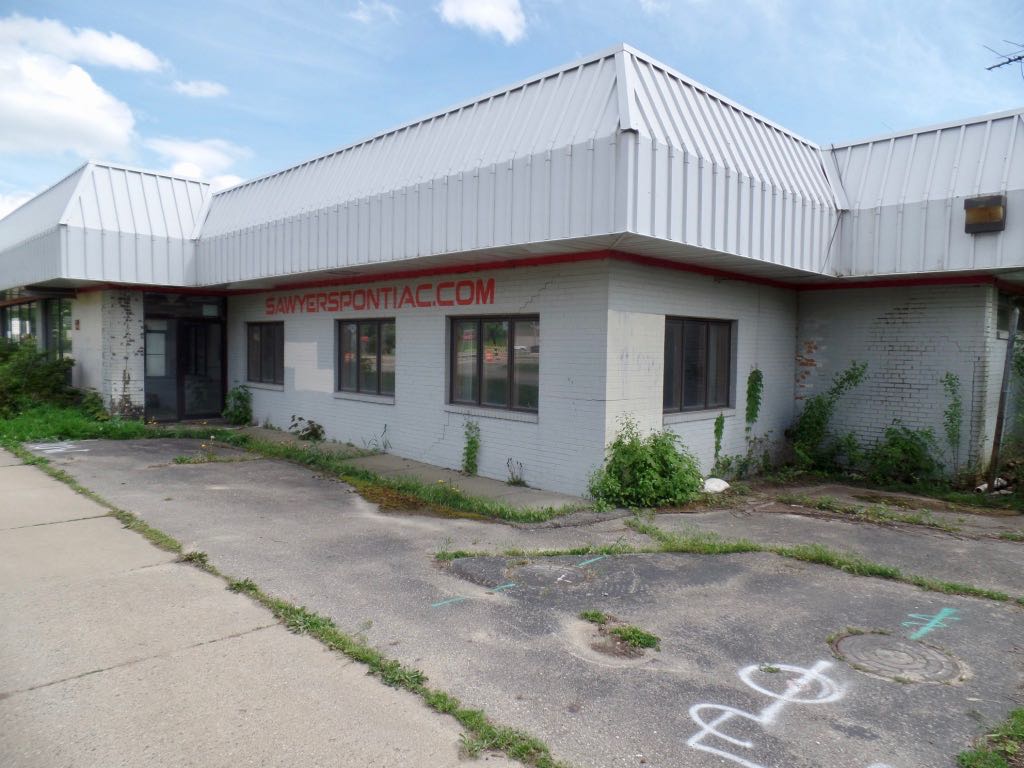 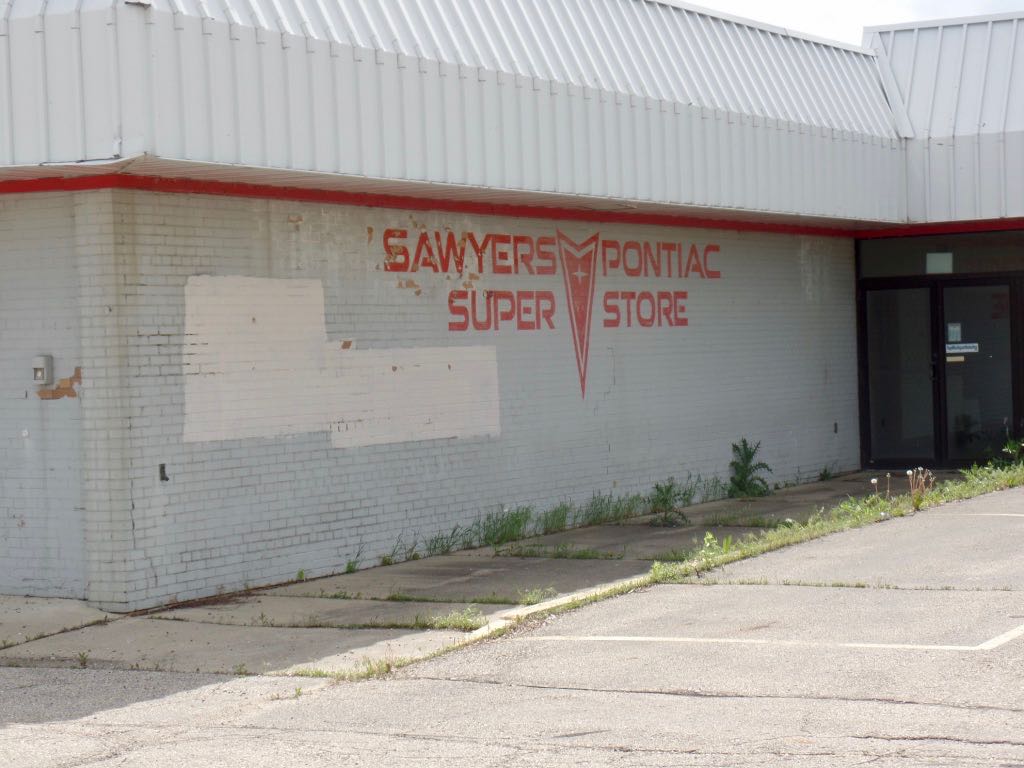 I appreciate that it uses the lettering from the screen displays of the 1980s Star Trek movies. 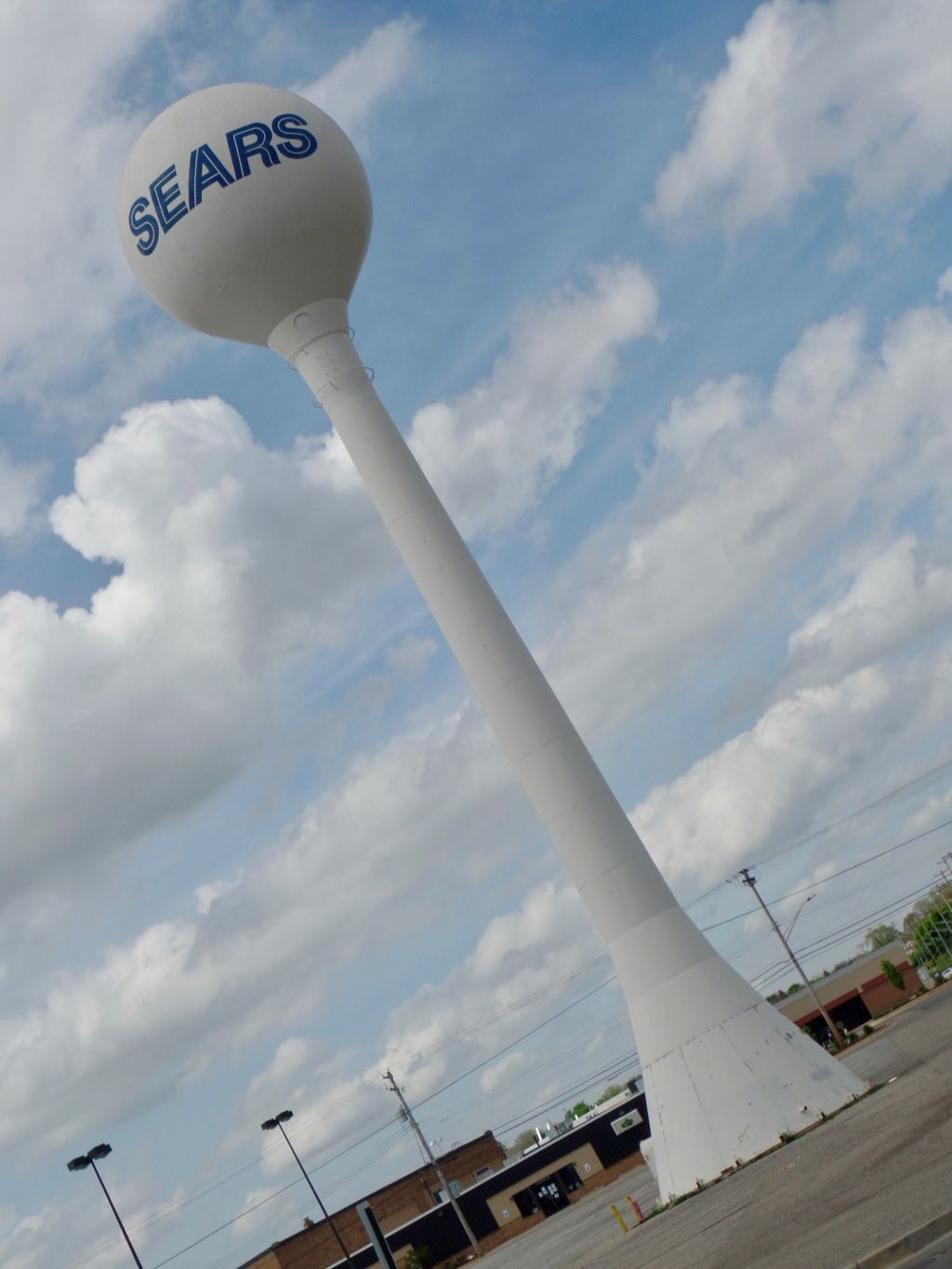 The Sears water tower watches over Frandor, local shopping mall. It used to completely tower over the place but a couple years ago they built an apartment complex that's taller than it. The Sears closed down last year. I don't know whether the tower still holds any water, or if it does, for what. 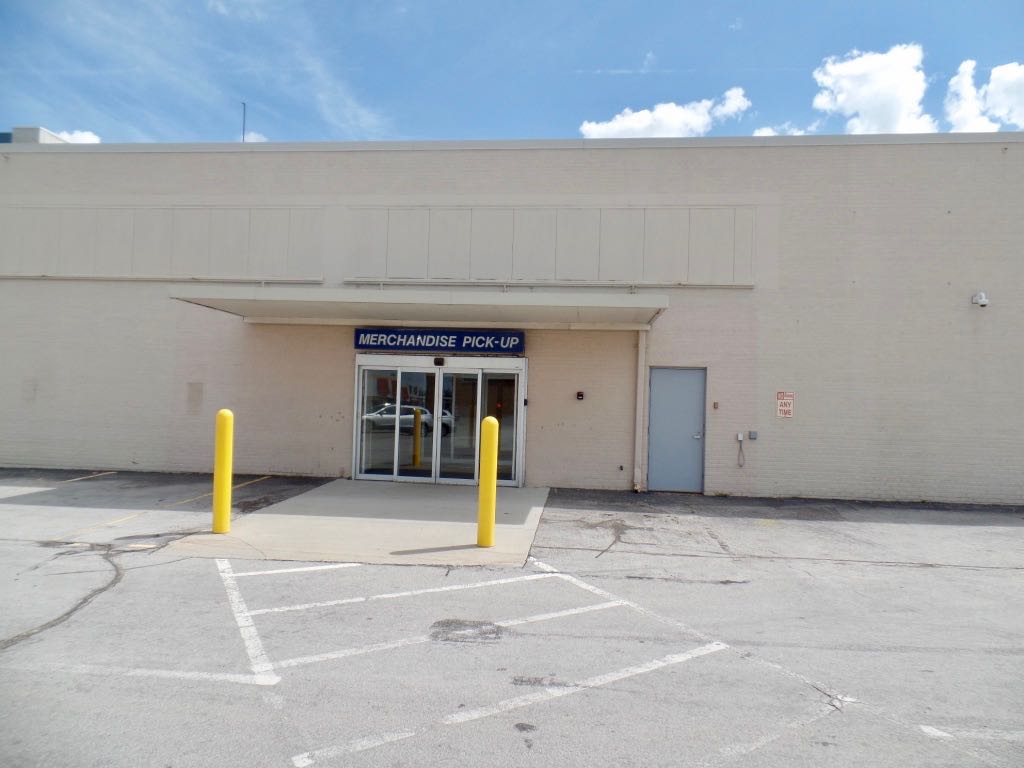 I guess when they were selling off fixtures nobody wanted to buy the Merchandise Pick-Up sign from Sears. 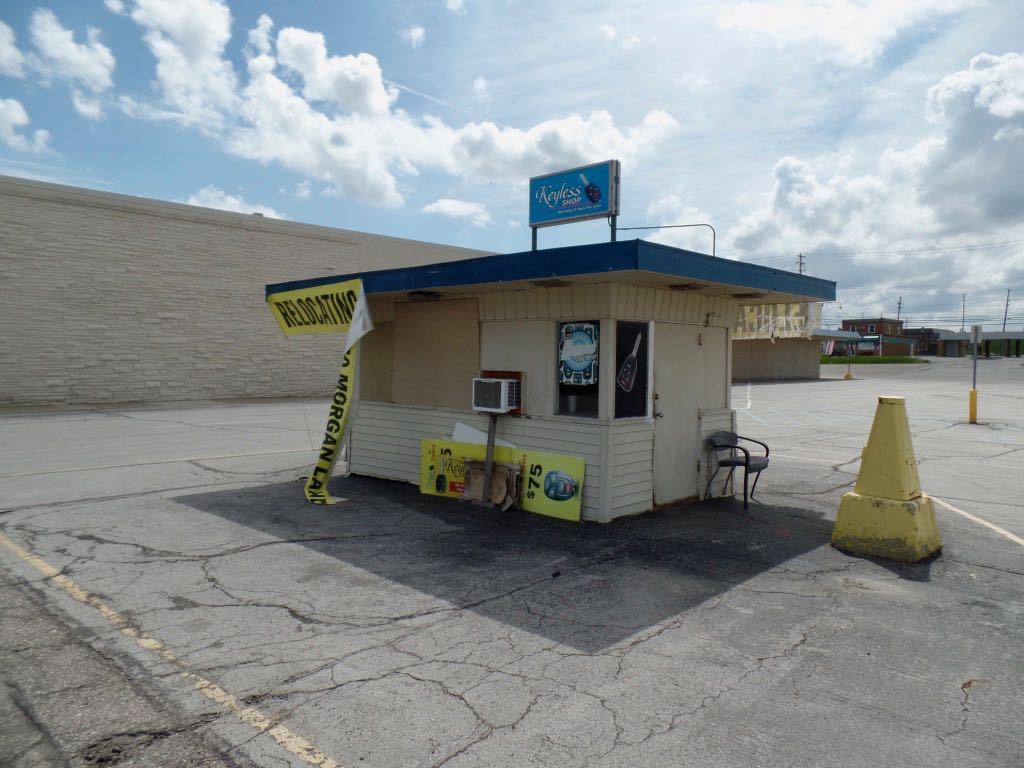 The sad little key-duplication place, which clearly used to be a Photomap, outside Sears. With the closing of Sears they abandoned this to go set up somewhere near the living Frandor buildings. 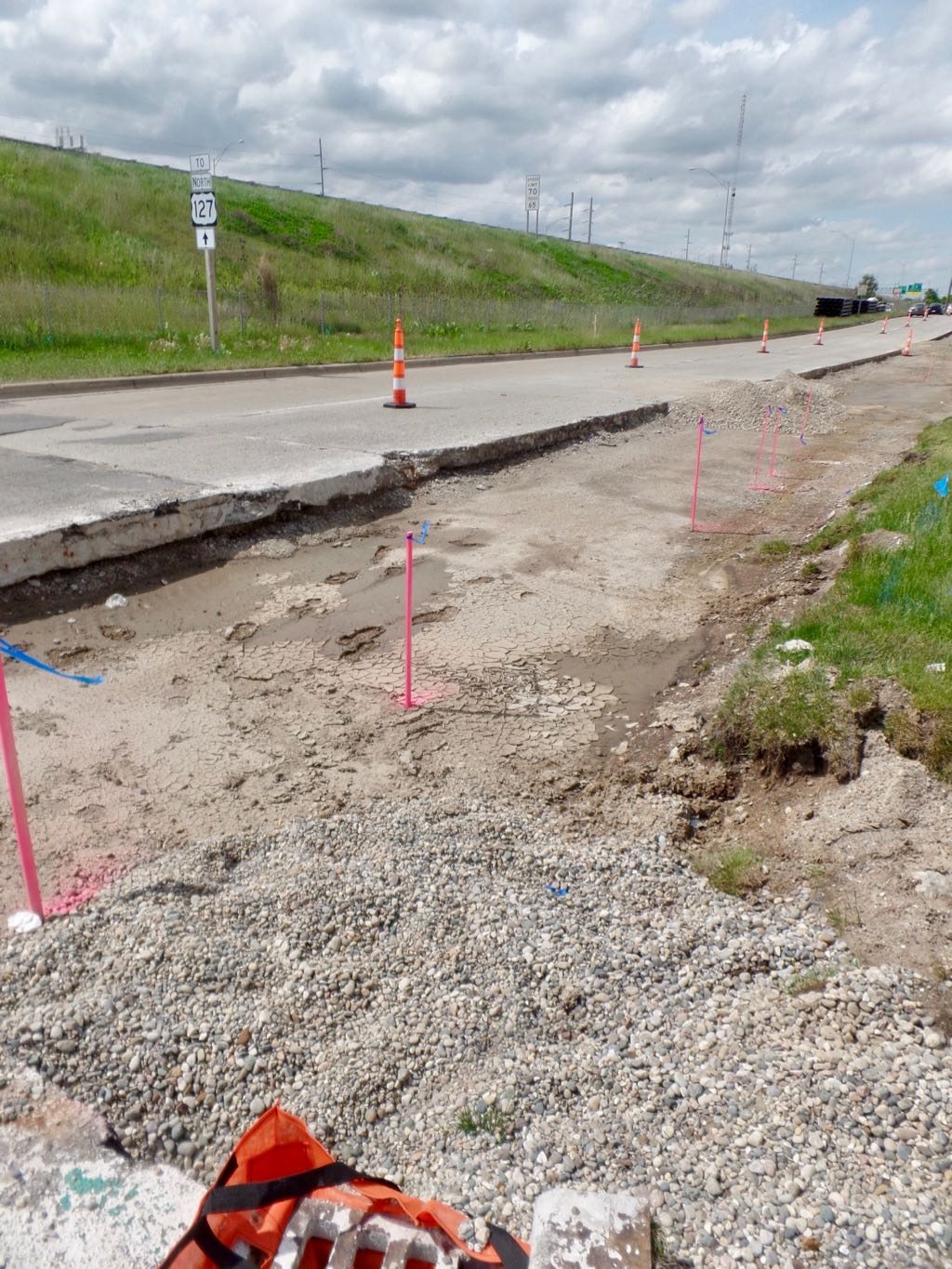 Oh, they're re-paving one of the roads on the west side of Frandor, so I got this snap of a major street one-third missing. 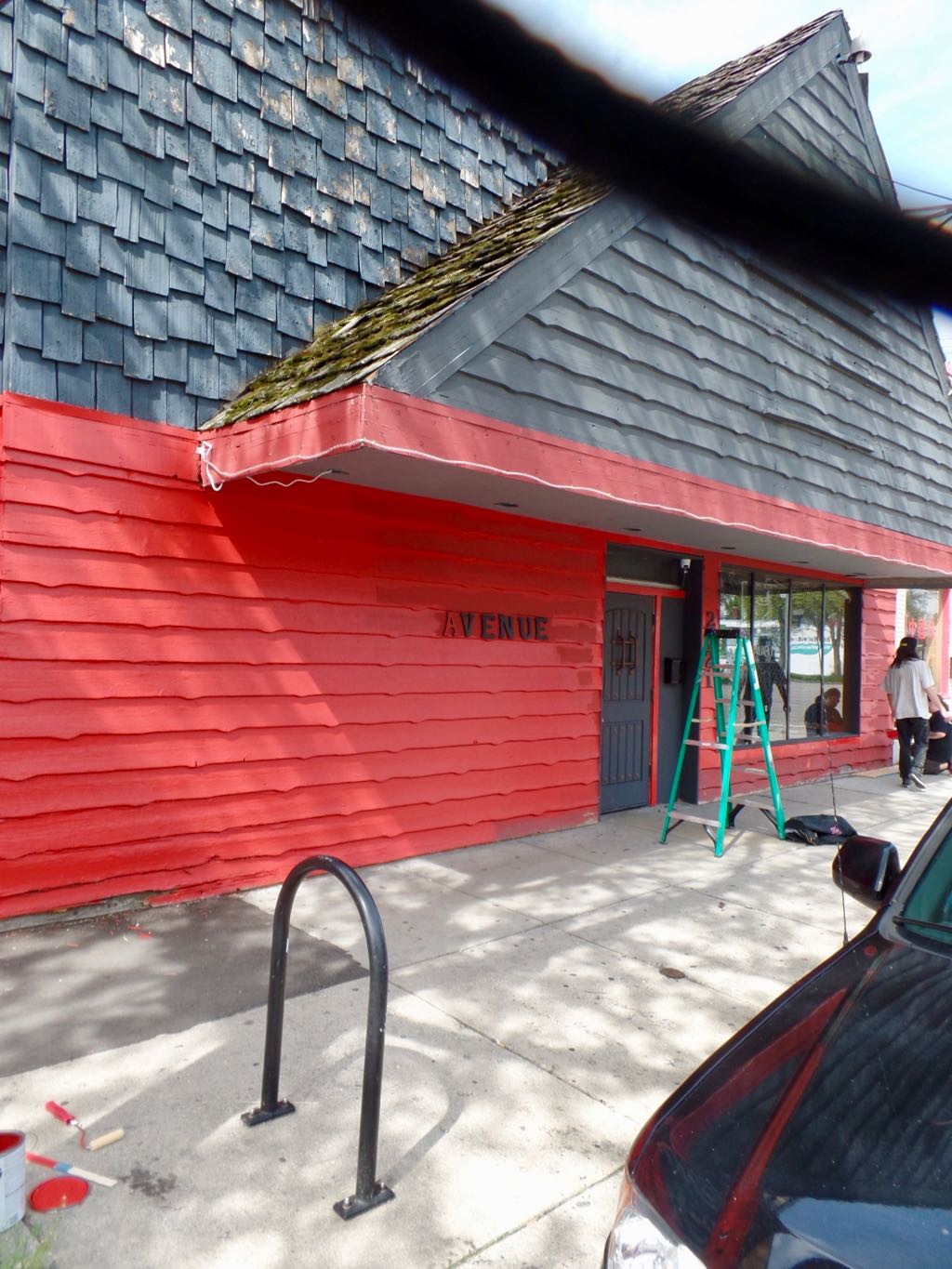 Oh, and they were painting the local hipster bar, changing its red facade to ... the same red. But a little newer. 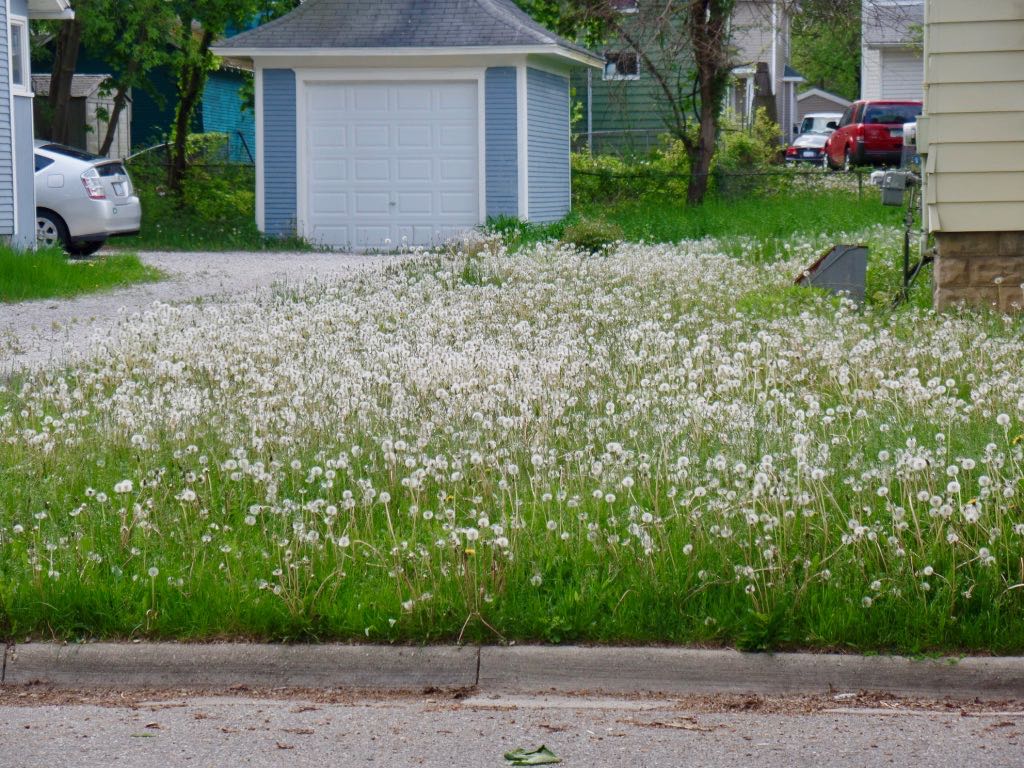 Thanks to the rain everybody's had a nice bunch of dandelions lately!

Trivia: In March 1924 Detroit Police arrested racketeers who had threatened to blind the grandchildren of Henry Ford unless Edsel Ford paid protection money. Source: Ford: The Men and the Machine, Robert Lacey.