A minimum of chit chat

In better circumstances, I'd be out at our hipster bar, in the aftermath of the 14th Super Ball split-flipper zen tournament, two weeks after the end of the pinball season. We'd be planning to start the next in two more weeks, then to take a month off for Pinburgh, the Baby Food Festival, and to give me and

Well. I know what you're really here for. It's answers to questions! Questions like What's Going On In Gasoline Alley? Why is Gasoline Alley in reruns? March - May 2020 plot in summary here.

And with that done? More of the closing day for Michigan's Adventure, 2018. 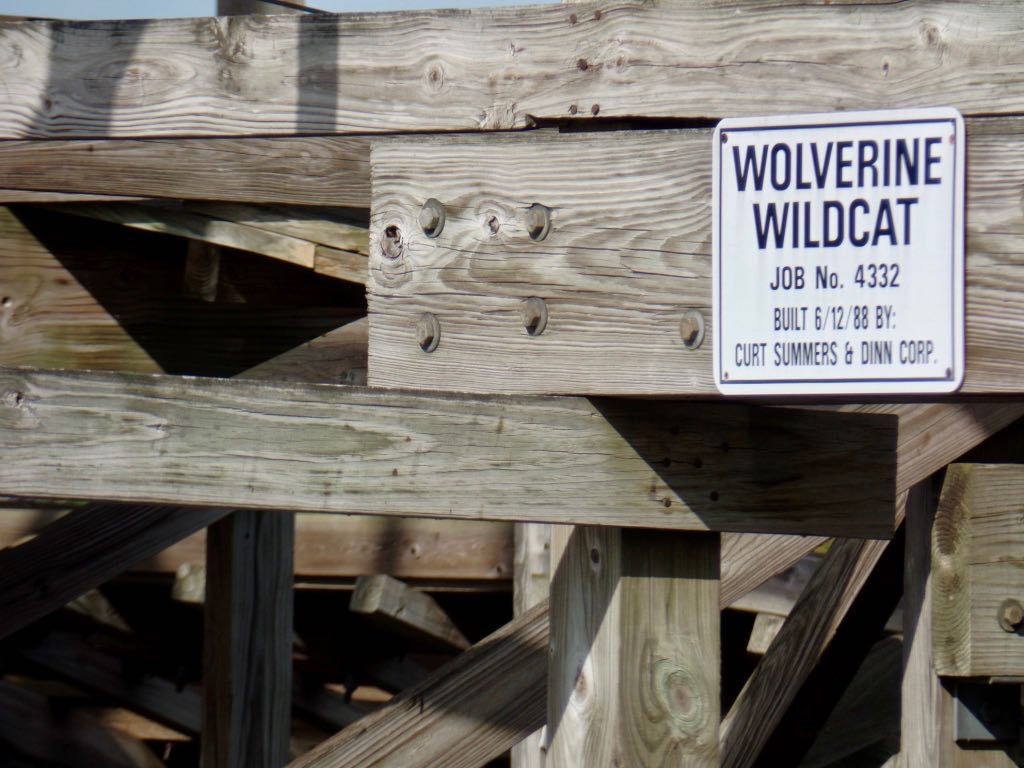 Maker's plate for Wolverine Wildcat. Also, boy, Summers and Dinn must have had a heck of a day the 12th of June, 1988, building all that roller coaster. I bet they paused the scenario to do it. 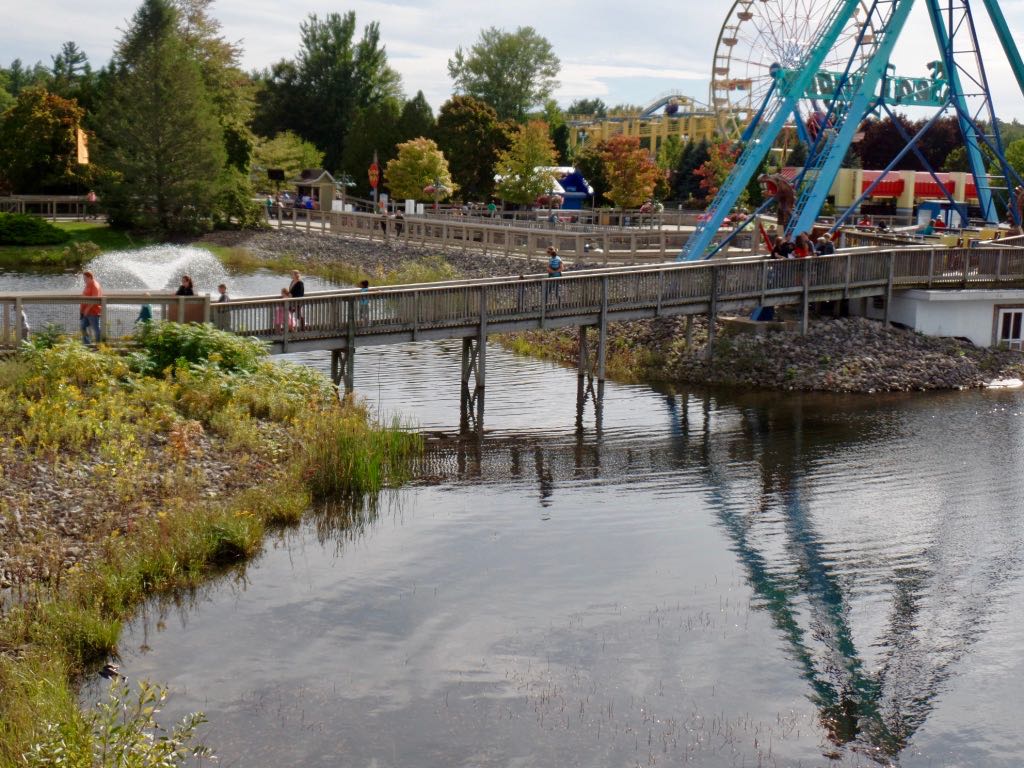 Looking back at the lagoon, and people getting off the Sea Dragon rocking ship ride. 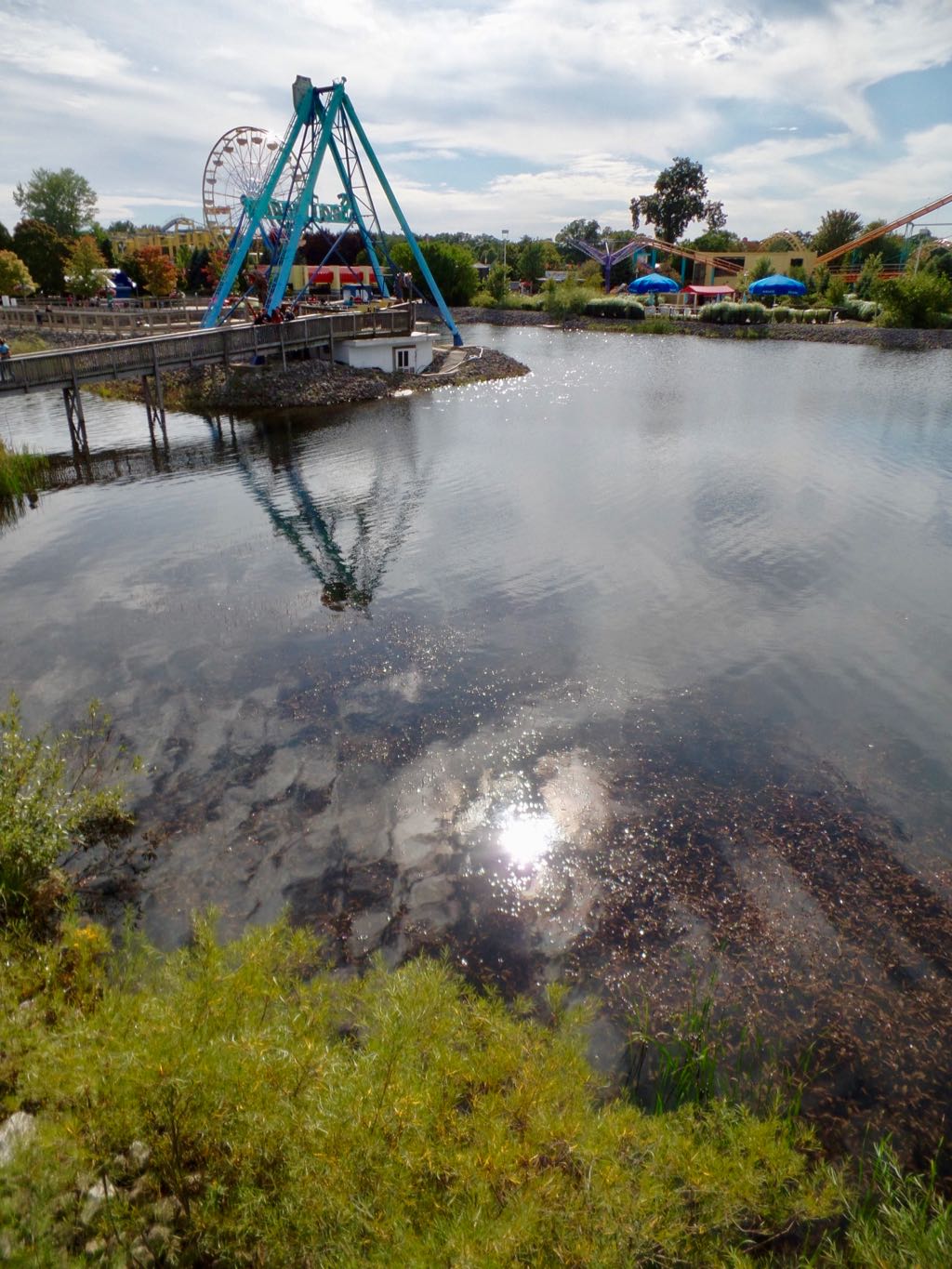 Here's a bit more view of the lagoon. ... I'm not complaining but why is Closing Day always gorgeous like this? 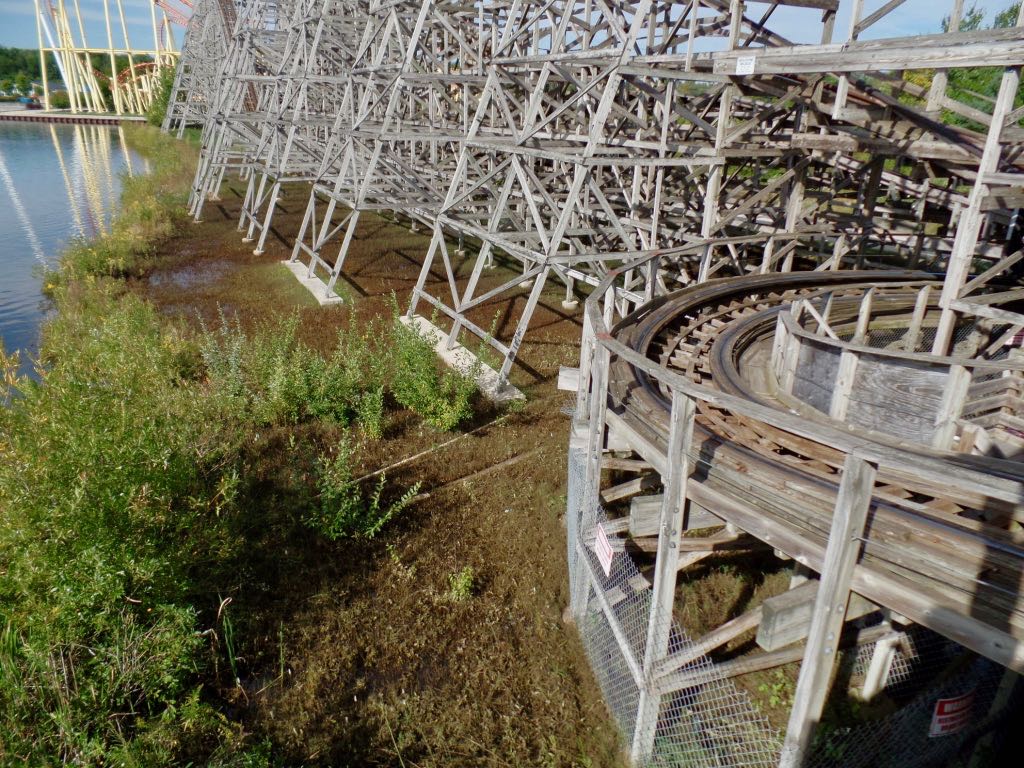 The floodwaters have receded from Wolverine Wildcat, but it's still pretty damp. 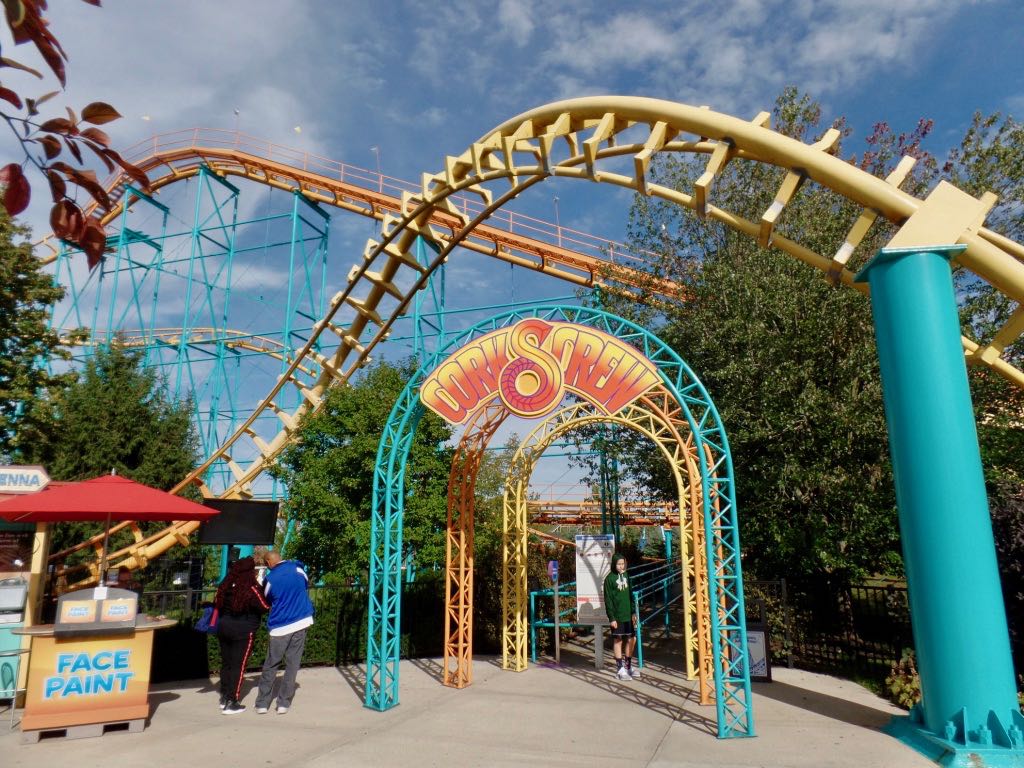 Entrance to Corkscrew, the park's original and oldest roller coaster. The logo really suggests they wanted to do something with a snake but fell back from that. 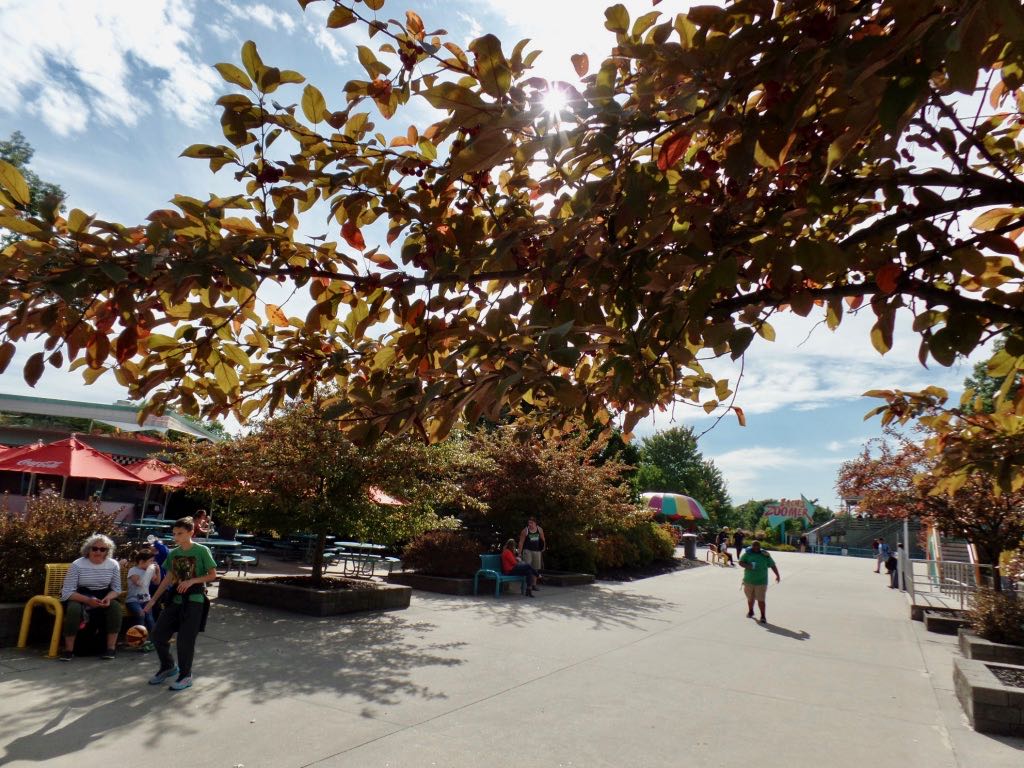 Autumn leaves as we look west, over towards (in the lower right) Zach's Zoomer. The stairs leading to (now-defunct) Be-Bop Boulevard are visible, though the model car ride isn't. 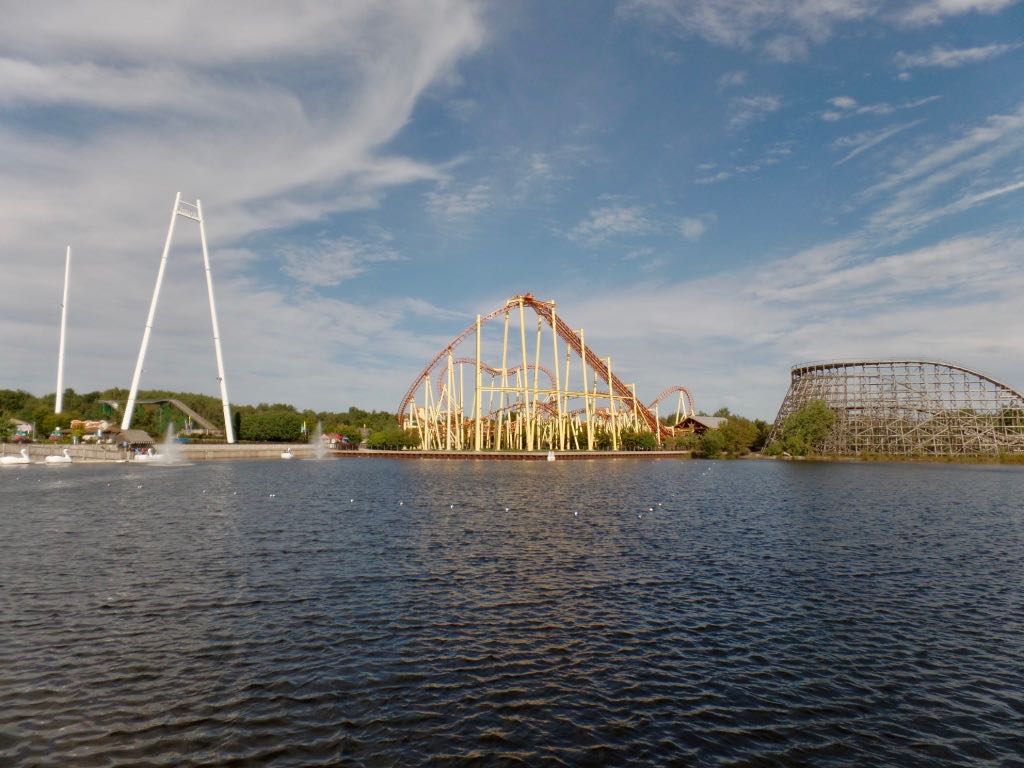 And here's looking out over the lagoon at Thunderhawk, in the center, with Wolverine Wildcat to the right. The roped-off area of the lagoon is for the swan boat ride. 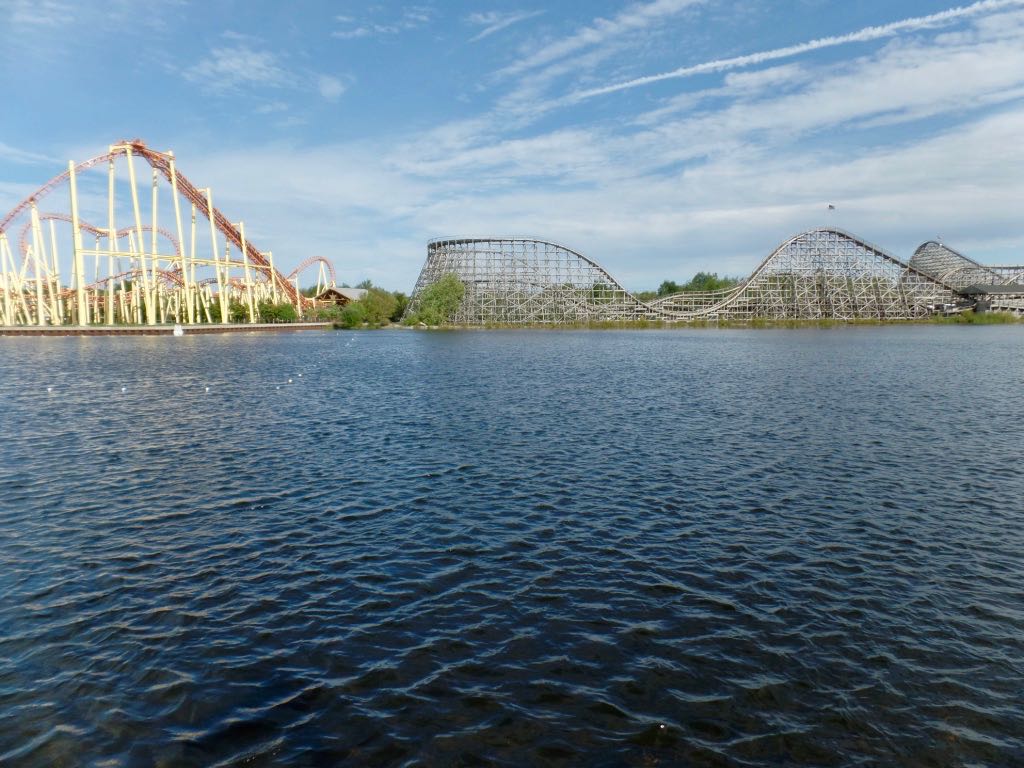 Thunderhawk and Wolverine Wildcat and I think there's just something in the scene that works really well, here. 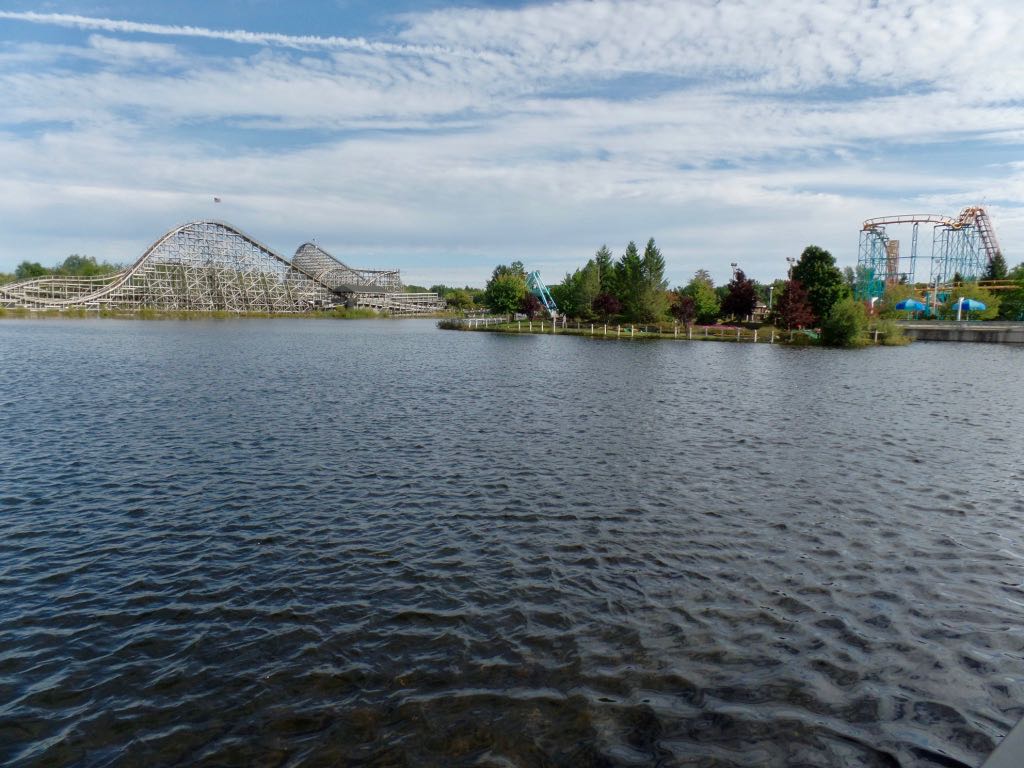 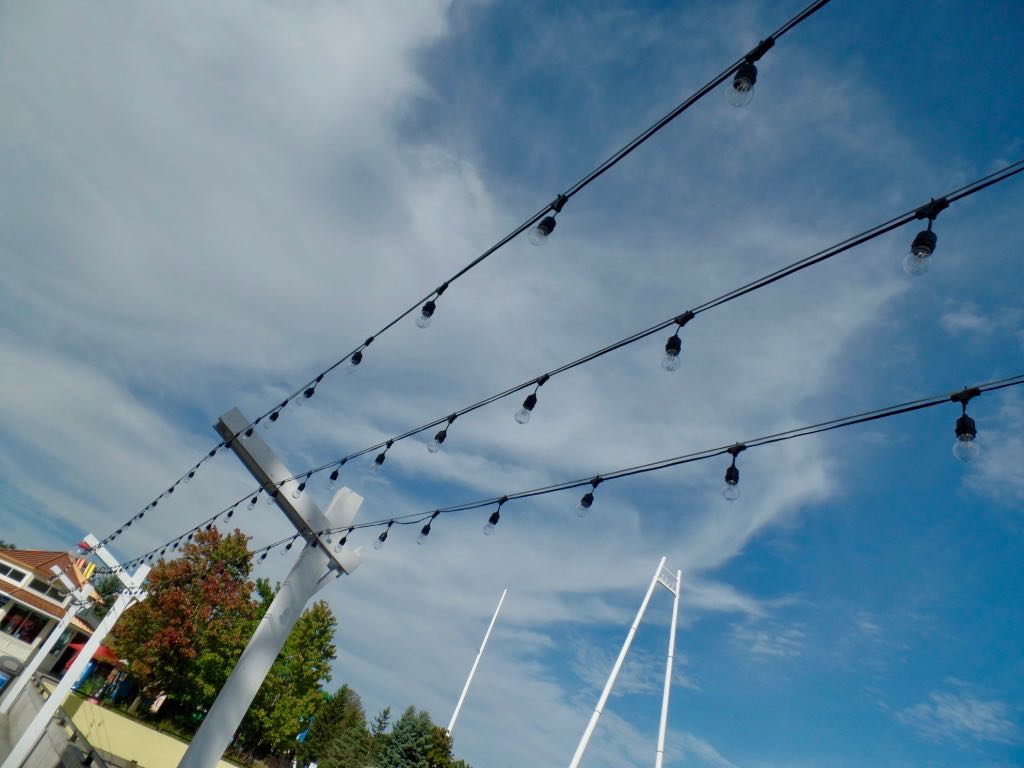 OK, so Michigan's Adventure doesn't have night hours, apart from like fifteen minutes at the end of some late-August nights. ... Why these overhead strands of light near the water park end of the lagoon, then? 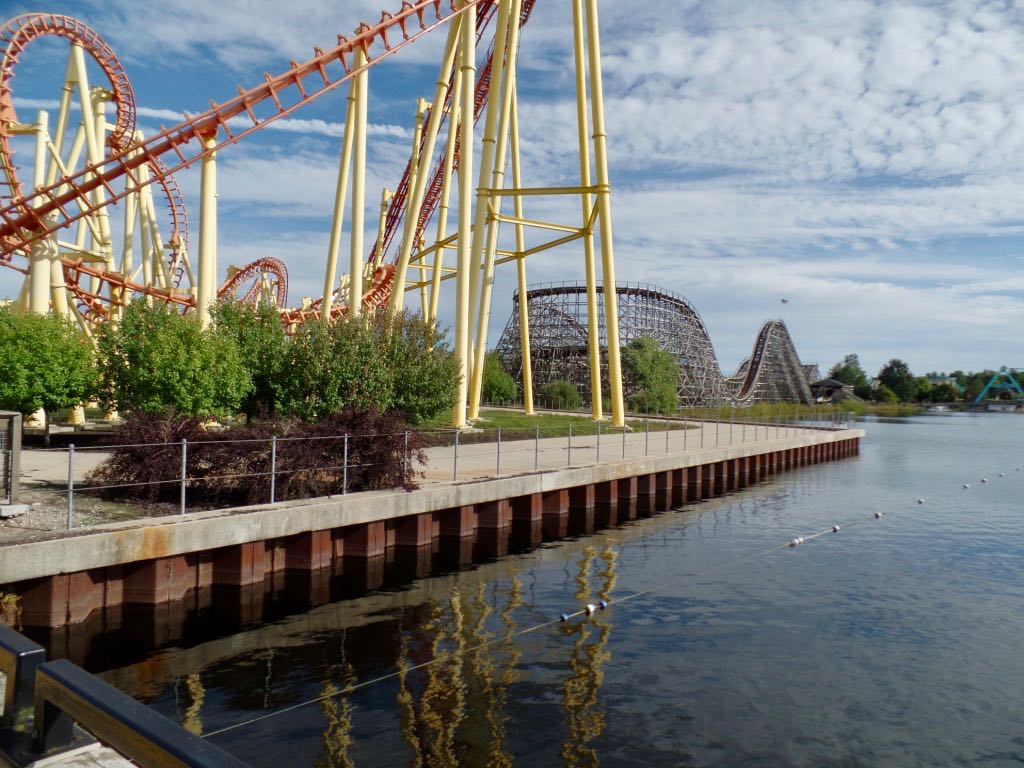 From the Swan Boats, looking over Thunderhawk and Wolverine Wildcat. 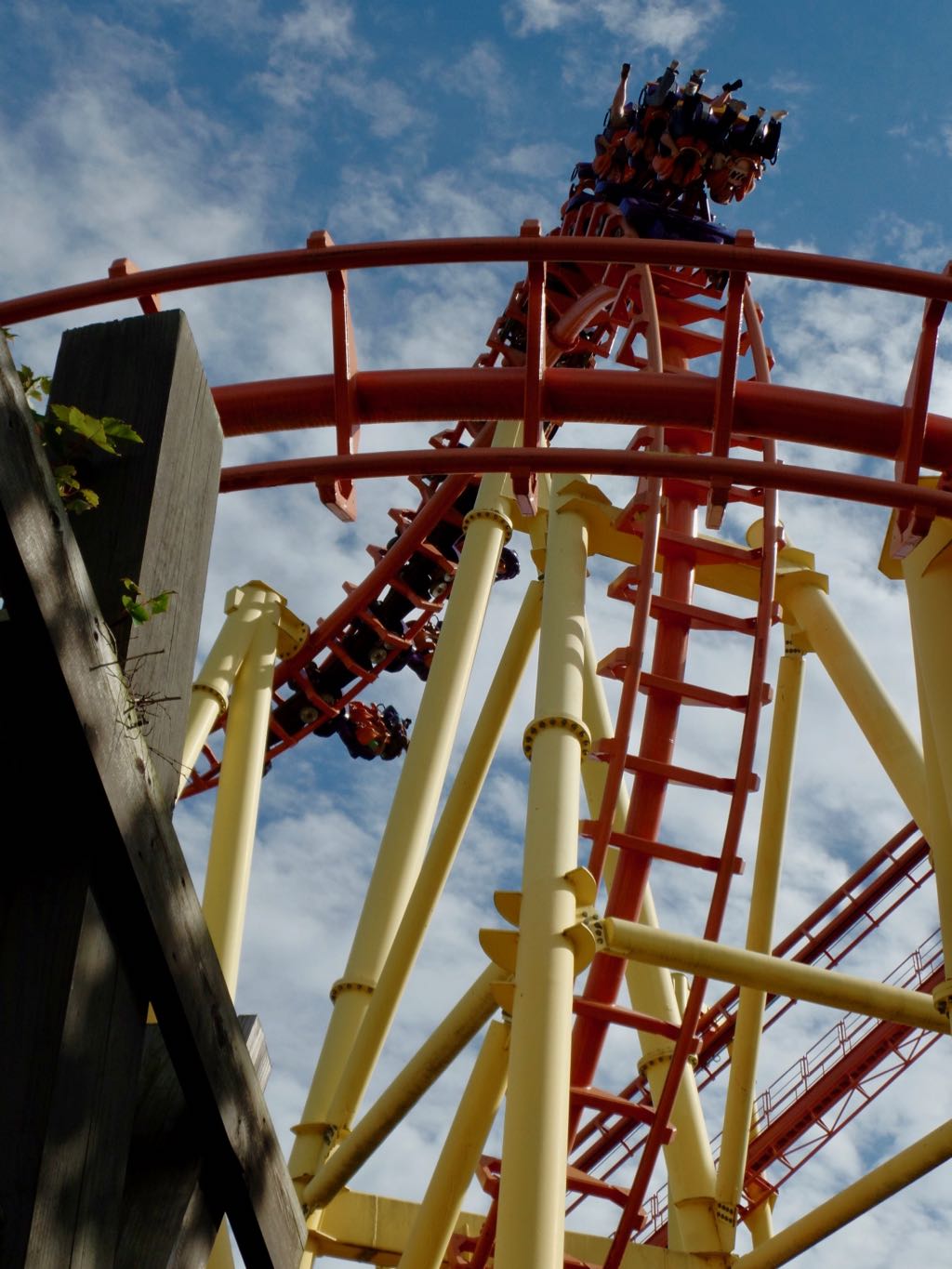 People having fun on Thunderhawk! It's been known to happen. (The head restraints are pretty head-bangy, is the problem.) 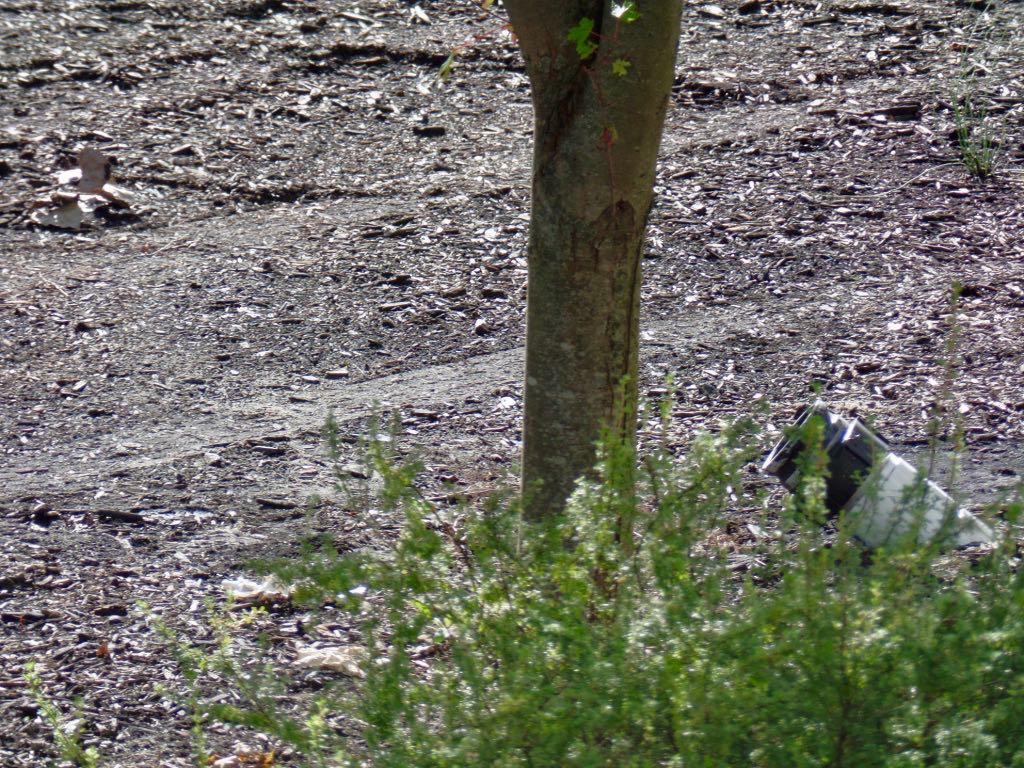 So that's where they had been vacuuming up water the week before. Looks like they succeeded! 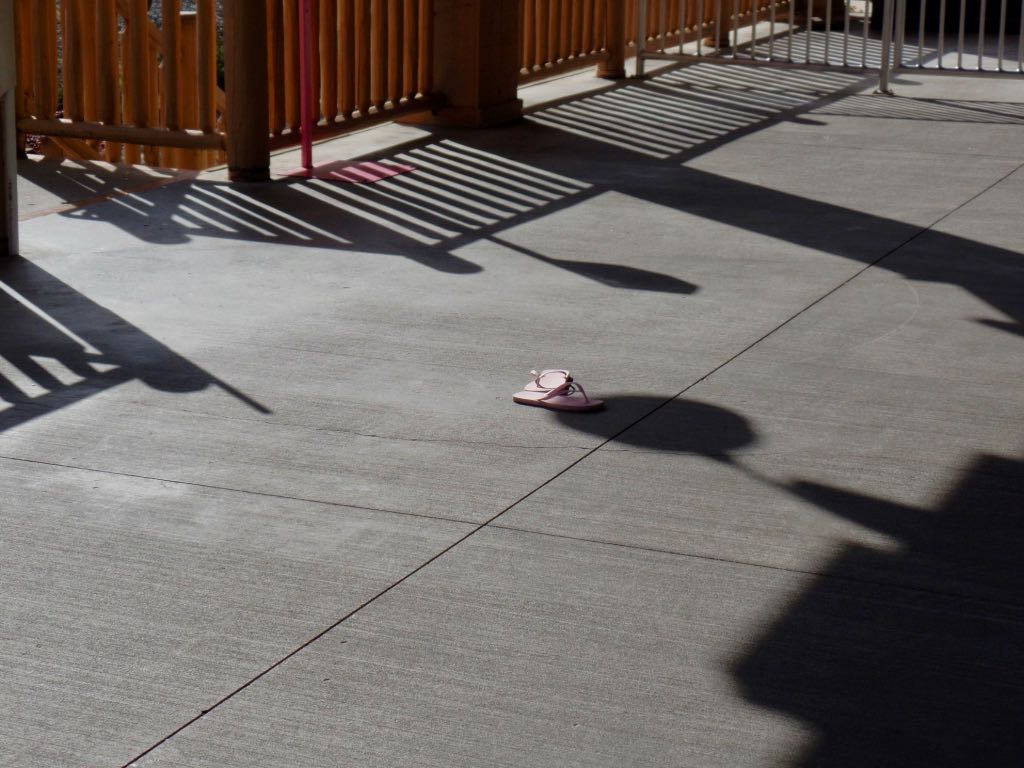 Thunderhawk doesn't let you ride with loose sandals and, apparently, someone didn't understand that you leave them in the bins on the exit side of the train, not loose on the loading side of the train. 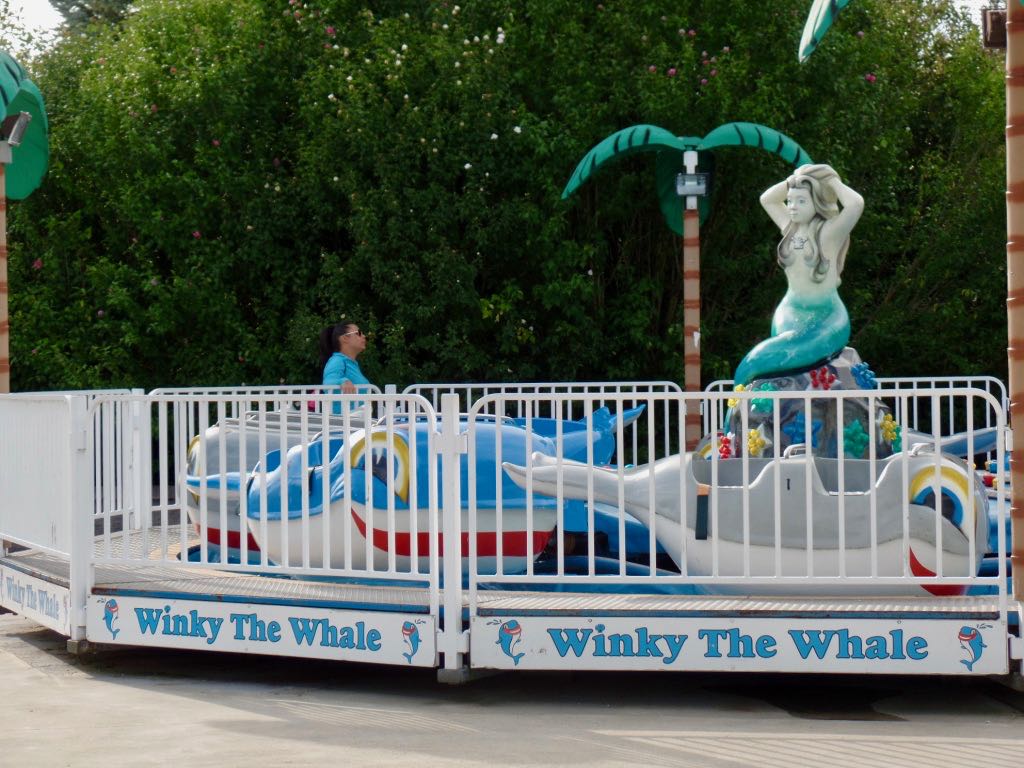 Winky the Whale: one of the small kiddie rides and, surely, one of the oldest rides at the park. We keep worrying every year that they're going to take it out, but it remains on the list of rides even today. 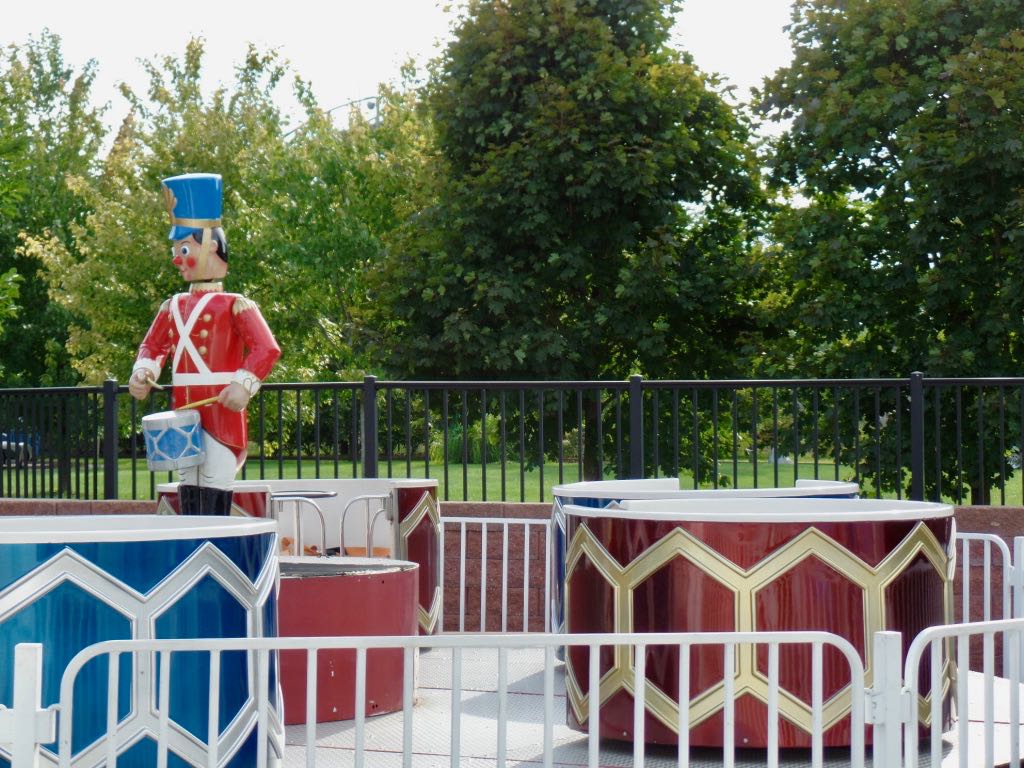 Little Drummer Boy is another of those small kids rides that seems ancient and for which we worry that each year is its last.

Trivia: At the halfway point of the 1889 American Association season Louisville's team was already 40 games out of first place. They finished the season 66½ games behind. Source: The Beer and Whiskey League: The Illustrated History of the American Association --- Baseball's Renegade Major League, David Nemec.

Currently Reading: The Thousand-Year Flood: The Ohio-Mississippi Disaster of 1937, David Welky. Which starts out the author being defensive that he does not mean the flood of 1927, that's a totally different massive flood. Also with the observation that the Ohio just doesn't make the cut of Great Rivers, noting in part that it never had (to westerners) any mystery to its origins, and it doesn't end in a great ocean or sea but rather by becoming a tributary to a much greater river. Something to be said for that.

PS: I'm looking for the first topic for my 2020 Mathematics A-to-Z so if you'd like to see me explain a thing, now's your chance!